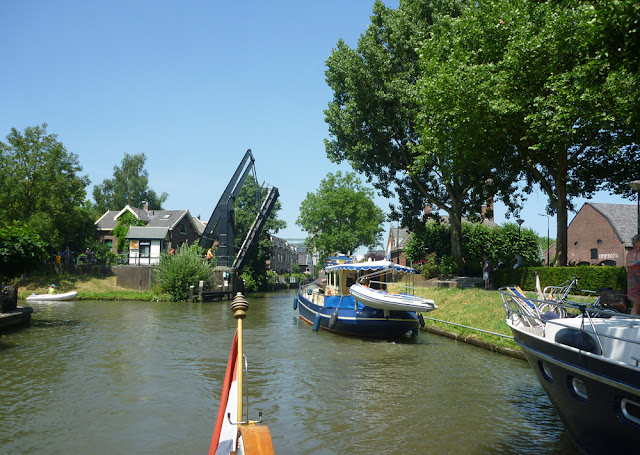 After a relaxing overnight pause in Montfoort, we slipped our lines at 1150 on Sunday the 21st of July and continued along Hollandsche IJssel. We had a couple of waits for low bridges to be lifted for us as we slowly wound our way along the narrow canal. 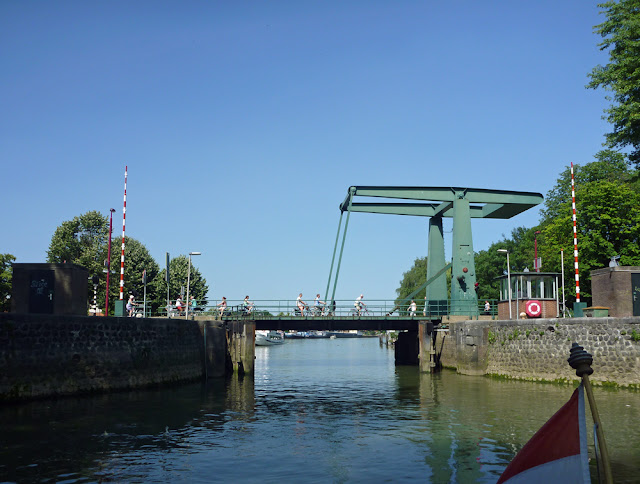 Many of the bridges have sufficient clearance under them, so they did not delay us, nor disturb the flow of cycle and pedestrian traffic. The day was clear and hot, without a breath of wind when just before 1400, we paused for lunch on a fine new mooring facility in the centre of Nieuwegein. 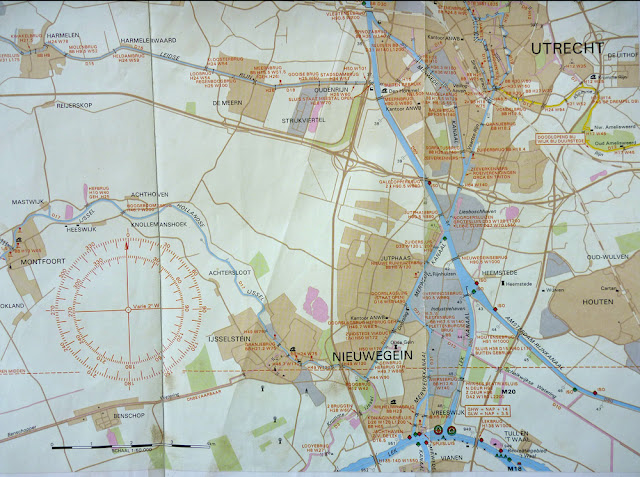 After lunch we resumed our route, quickly coming to the end of Hollandsche IJssel and turning sharp right into Schalkwijkse Wetering, which we followed south easterly for a kilometre or so before turning right again to follow Meerwedekanaal southward. 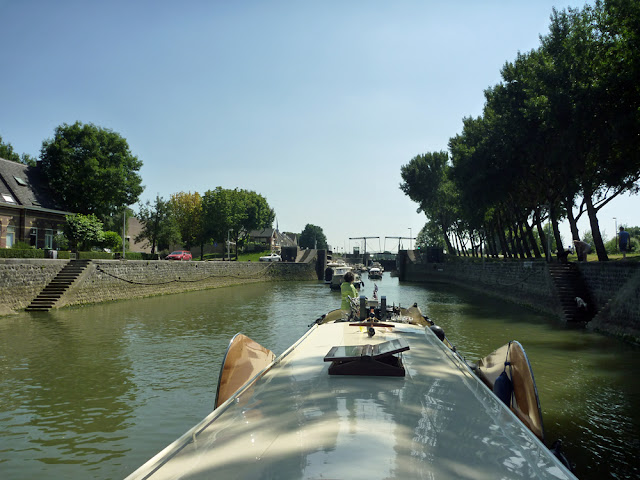 We joined the rear of a long line of pleasure craft that was just beginning to enter the lock. We paraded with them through the first set of lock gates and then through the second set. 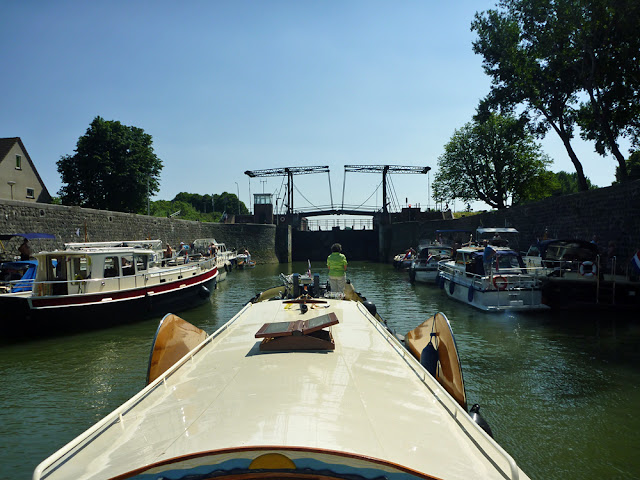 When we arrived in the second lock chamber, its sides were completely lined with boats, and they were rafted on each other three and four deep. We were the last boat in before the doors astern of us closed, so we simply sat in the middle of the chamber. 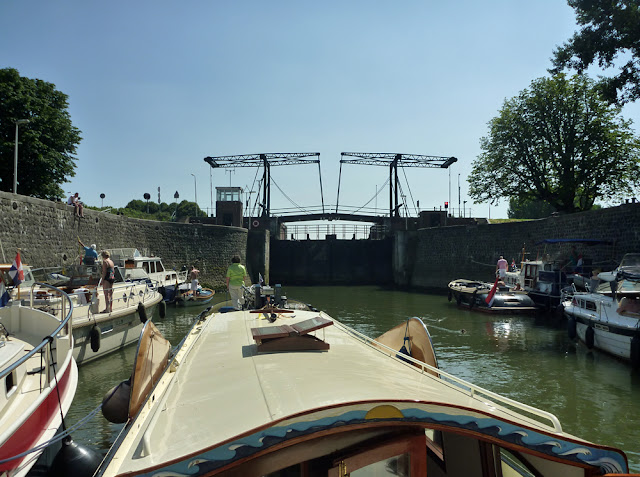 Gradually, the slowly swirling flow of the water entering the lock caused us to drift forward and to port, and we eventually were received alongside as the fifth in a raft. 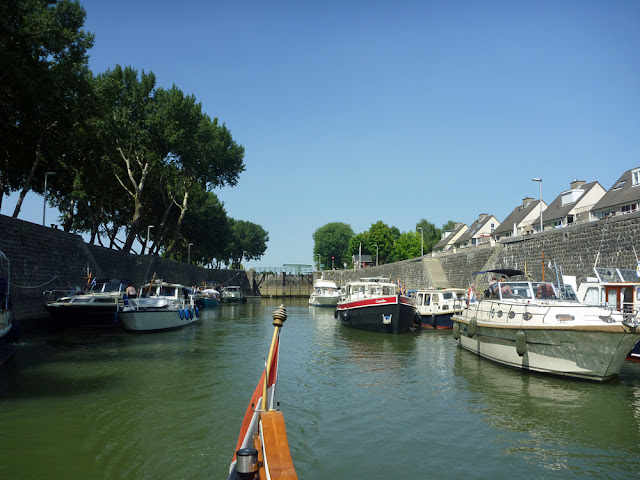 Because of our position in the lock, we were among the first dozen of the thirty or so boats to untangle and thread out through the upstream doors and along the short arm from the lock to the Lek. The Lek is one of the major branches of the Rijn and it flows to sea through Rotterdam. 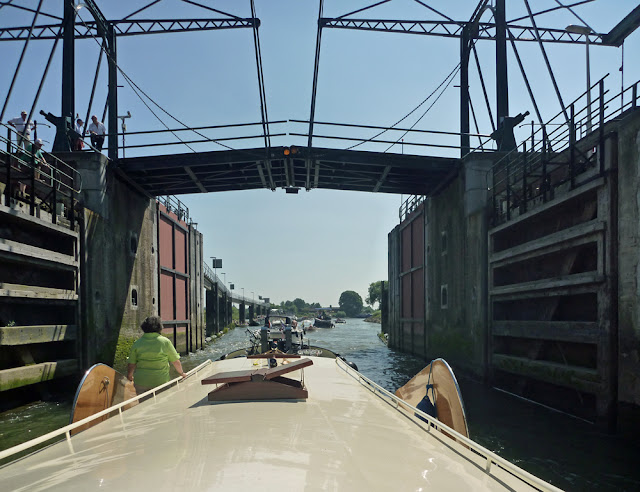 At the river the parade split, with some boats turning right down the river toward Rotterdam. Others turned left and headed up toward Arnhem or Nijmegen and about a dozen jogged slightly upstream, crossed the river and entered the continuation of Meerwedekanaal southward. We were in that group. After less than a kilometre we entered another lock where there was plenty of room for us to secure alongside for the short drop. Once we had reached canal level, the doors opened and the parade resumed. 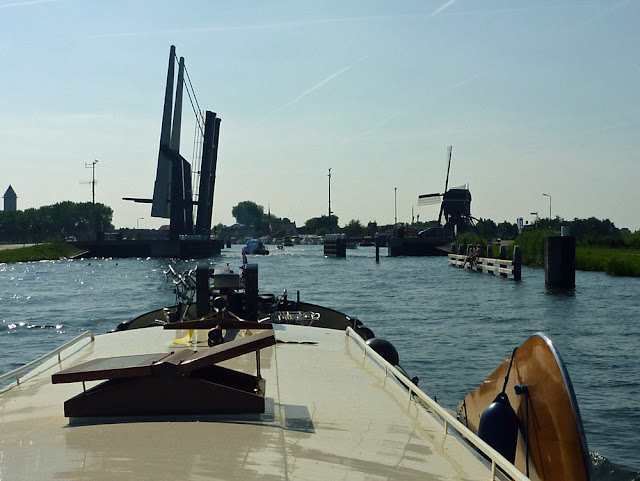 The Meerwedekanaal is rather dull and boring compared to the other waterways we have been on thus far in the Netherlands. Though there are many pretty sights along the way, the canal runs mainly through comparatively bland landscape and a few decidedly industrial areas. 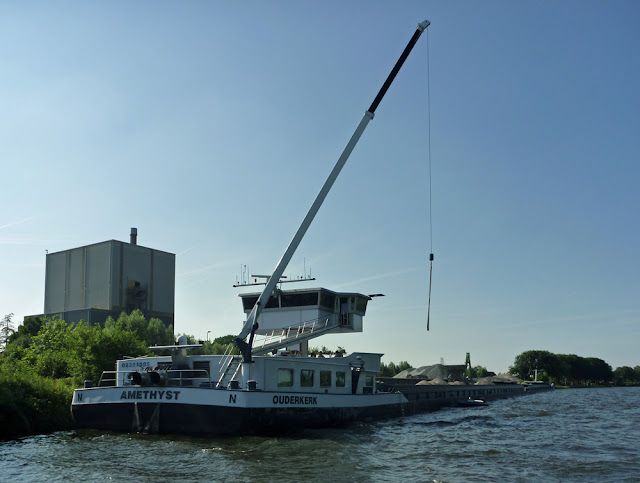 It is a rather broad canal, compared to those on which we have usually travelled this trip and along its banks in many places were large barges. Some of these were really huge, like this one, which must be 100 metres in length. Fortunately, it was Sunday, and all the commercial traffic seems to be taking a day of rest. 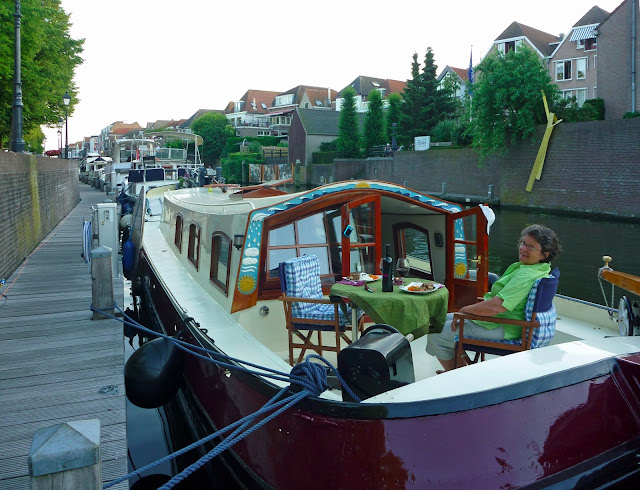 In the early evening we arrived in the centre of the old city of Gorinchem, where just through Korenbrugsluis we found an eighteen metre gap among the moored boats. At 1848 we secured to a wooden pontoon alongside the old brick wall. 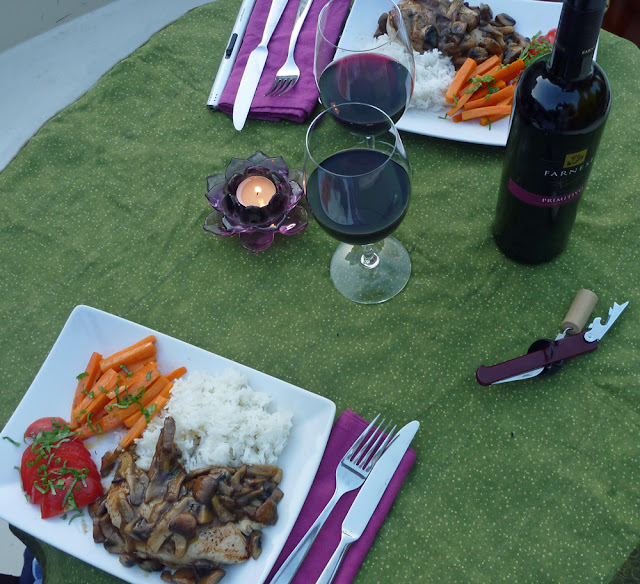 Once we had settled in, I put on my chef's toque and prepared chicken breasts in a crimini and oyster mushroom sauce served with basmati rice and butter-steamed carrots. With it we enjoyed a bottle of Farnese Primitivo and the wonderfully long and warm twilight.
Posted by Zonder Zorg at 04:48