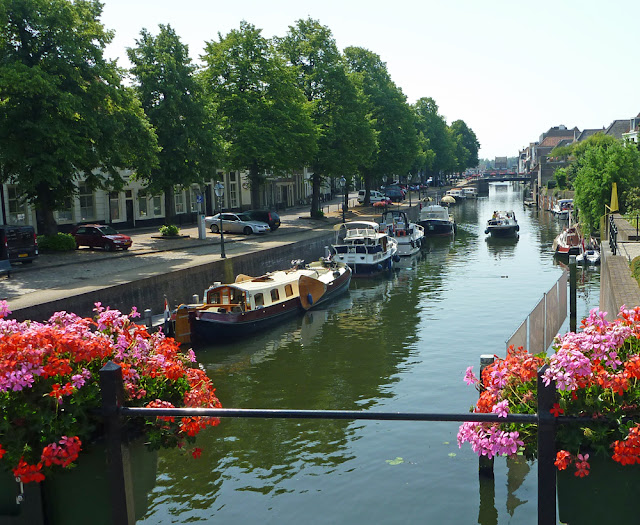 During dinner on Sunday evening, the temperature finally dropped below 30. Except for a few hours of overcast and drizzle on Saturday, we have been in two-week-long heatwave, with daily temperatures in the high 20s to mid 30s. Monday was again clear and by midmorning it was already hot. 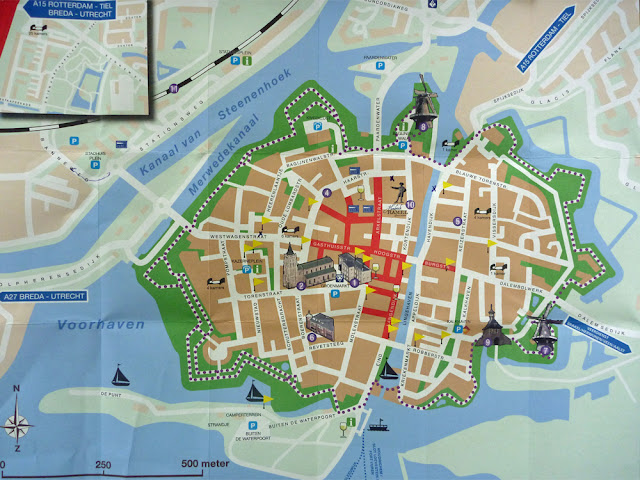 Gorinchem is one of the few cities in the Netherlands with its fortified walls preserved in their original state. Though obscured in history, it is thought that the community was established about a thousand years ago. Around 1250 Gorinchem became property of the Lords of Arkel and at the end of the thirteenth century earthen mounts reinforced with palisades were built around the settlement to protect it from domination by the neighboring counties of Holland and Gelre. In the mid-fourteenth century city walls were built, with seven gates and twenty-three watchtowers. Otto van Arkel granted it city rights in 1322.

The ancient walled city is a compact oblong shape, measuring about 900 by 600 metres, much of it surrounded by rivers and the remainder with moats. The Linge flows through its centre and we are moored along it.

We walked along the side of the canal past Visbrug to Peterbrug, which we crossed into the centre of the medieval walled city. The city had been built on delta land between two rivers, the Linge and the Merwede at their junctions with the Waal, a major distributary of the Rhine that flows to sea on the southern edge of Rotterdam. With its water transportation corridors, Gorinchem became an important trading centre for fish, corn and grain. 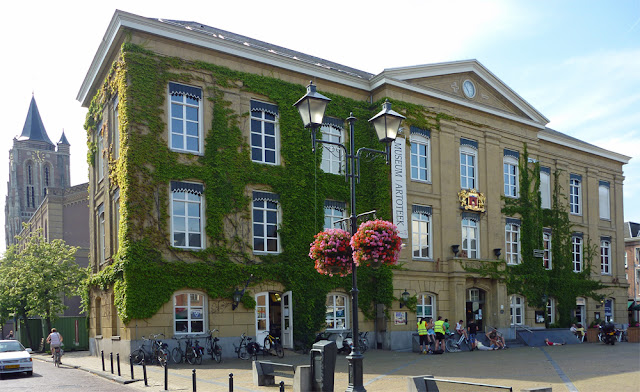 We headed into the city centre and the large squares there, Grotemarkt and Groenmarkt. Flanking the western side of Grotemarkt is the former city hall, now a museum and art gallery. 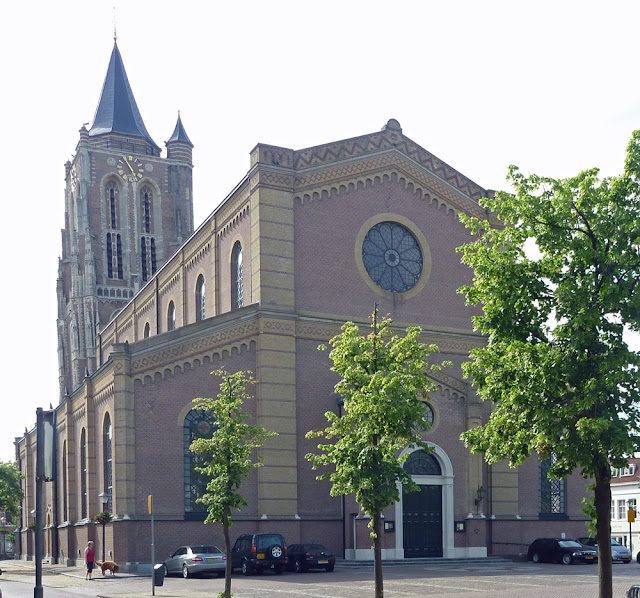 Beyond the museum is Grote Kerk with its leaning Grote Toren, which shifted to about 3º out of plumb while still under construction in the 1840s as a replacement to the previous one badly damaged decades earlier during the Napoleonic Wars. 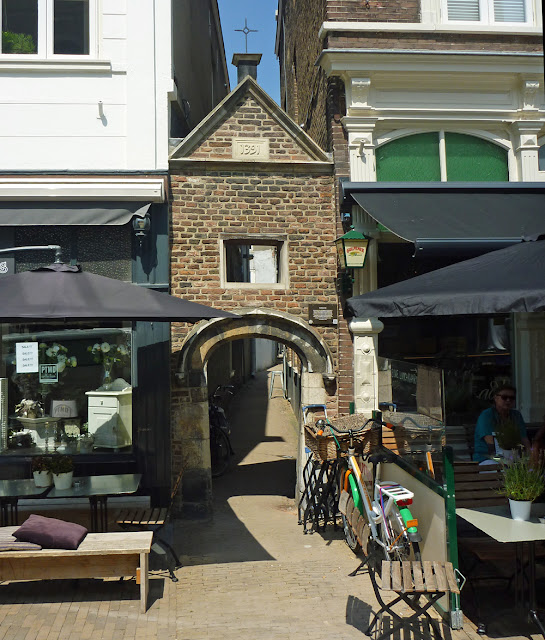 There are many old buildings in the central area, and we saw many from the fifteenth century and even back into the fourteenth. Thus portal dating to 1391 once led to a hospice offering care to poor travellers. 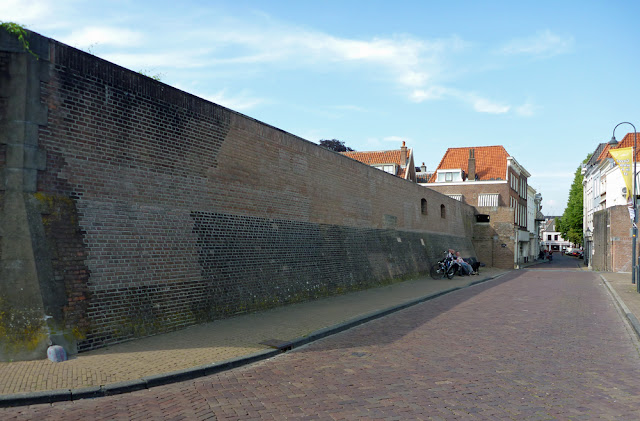 We headed out toward the walls, where we found a walking trail that leads for about seven kilometres along the top of the walls, so we followed it around. 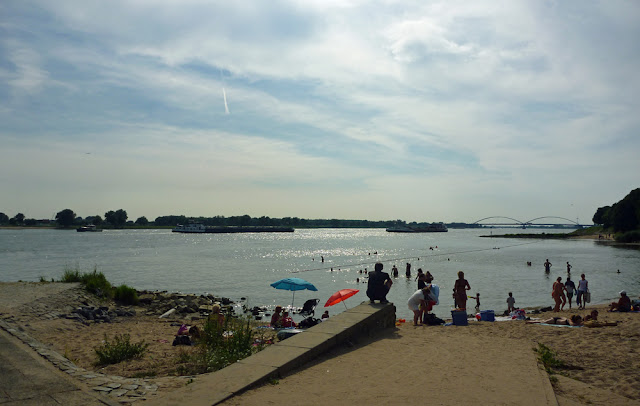 The south side of the city has the natural moat of the broad Waal and the bars along its banks. This area now serves as the local beach, while offshore the large commercial barges ply back and forth between the coast and the heart of Europe. 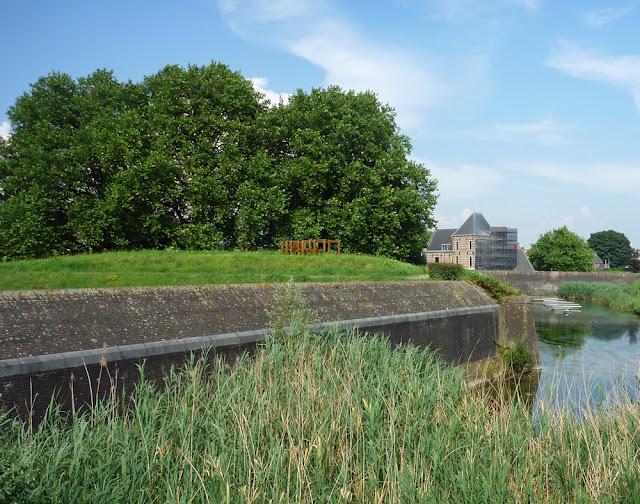 Further around, moats were dug and walls were built directly out of them to make it difficult for unwanted visitors. 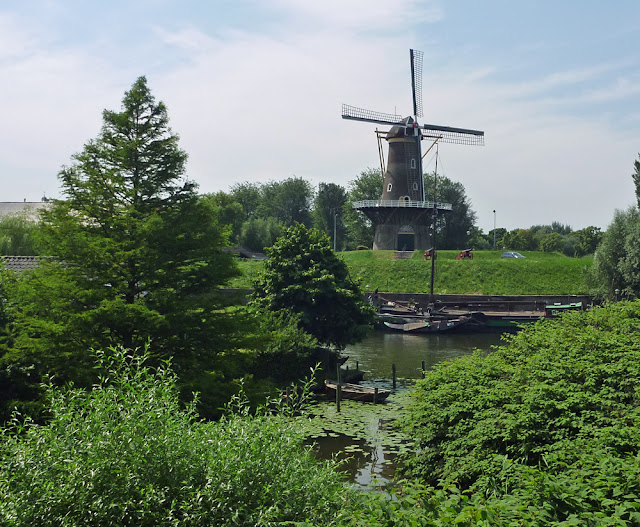 Alongside the moat stand two old windmills. This one, Nooit Volmaakt stands next to the Linge as it enters the city from the north through Korenbrug. The second windmill, De Hoop is on the west side, just along from Dalempoort. 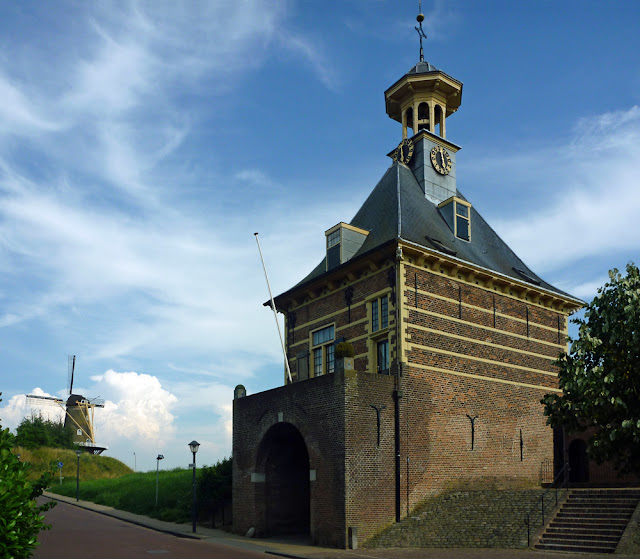 Dalempoort, dating from 1597 was the last city gate built. It is ornate, with a watchtower and a clock, and it led into the city from the tiny, but at the time, increasingly important salmon fishing port in the marshland just outside the walls. 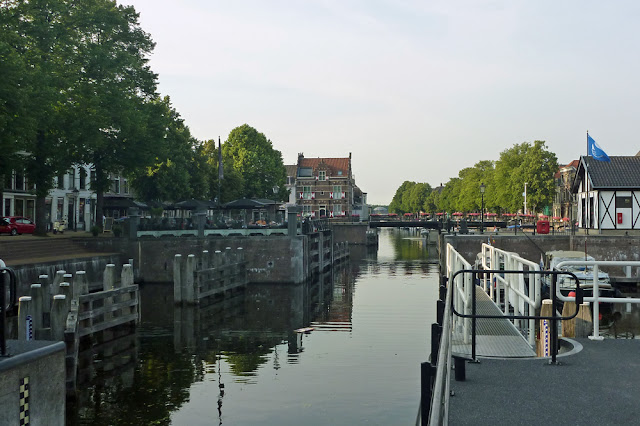 We ended our circuit of the walls at Jachtensluis, the lock which takes pleasure boats out of the city and into the Waal. From there it was an easy stroll back along the banks of the Linge to Zonder Zorg.

Earlier on Tuesday we had cycled to the collection of big-box stores a kilometre or so up the Linge from our mooring. There we had put together bicycle panniers full of small hardware, paints, brushes, carving chisels, masking tape, sandpaper, wire brushes and, we hope, everything else that we need to finish decorating Zonder Zorg. 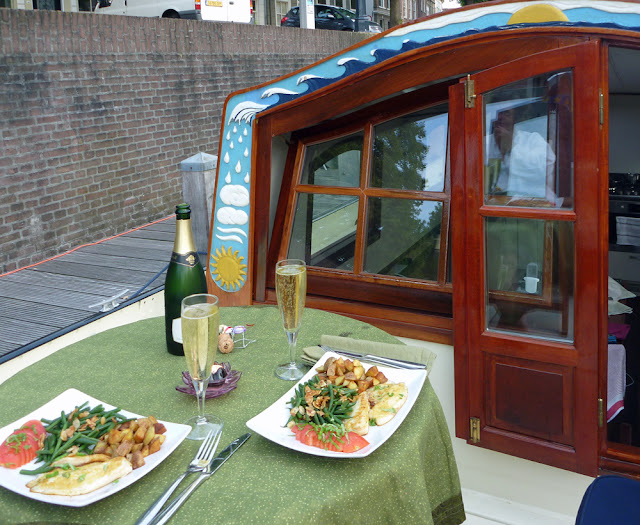 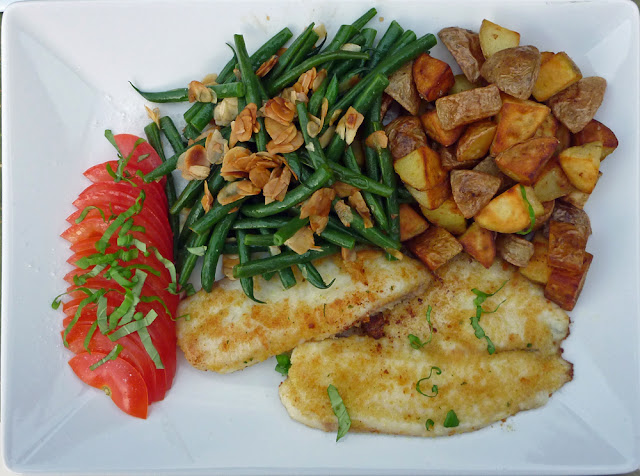 In the evening we relaxed with sautéed talapia filets served with butter-fried potatoes and green beans almandine. With it we enjoyed a bottle of Cava Portell Brut Nature. 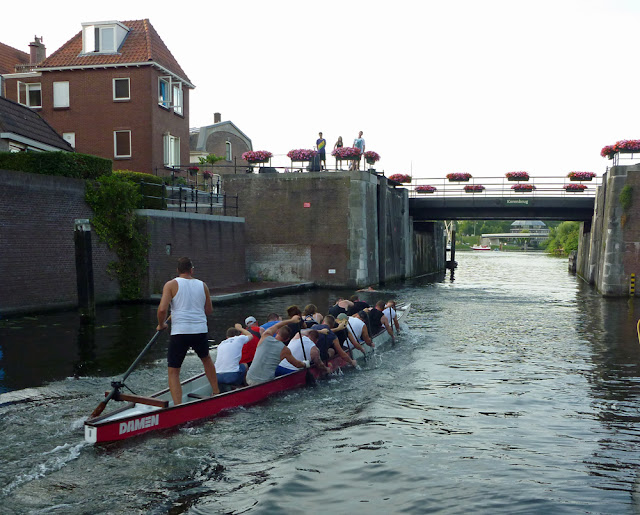 As we were dining, teams of dragon boats passed by and under Korenbrug. It reminded us of evenings along False Creek, near our Vancouver loft. In 1986 Vancouver had spawned the huge popularity of dragon boat racing, which has spread around the world. Although we love Vancouver dearly, we much prefer being here now.