From Ens to Haarlem At 1000 on Saturday the 29th of June we slipped from the wharf in Ens and headed back out the blind Enservaart to the Lemstervaart and turned southward. Shortly after noon we arrived at Voorstersluis, which brought us back up out of the level of the Noordoostpolder. From De Voorst we followed the Kadoeler Meer southeastward to Zwarte Meer, which we crossed using the buoyed channels to the Scheepvaartgat, which led us in a strong cross wind to the Goot and along it to the Ganzen Diep. 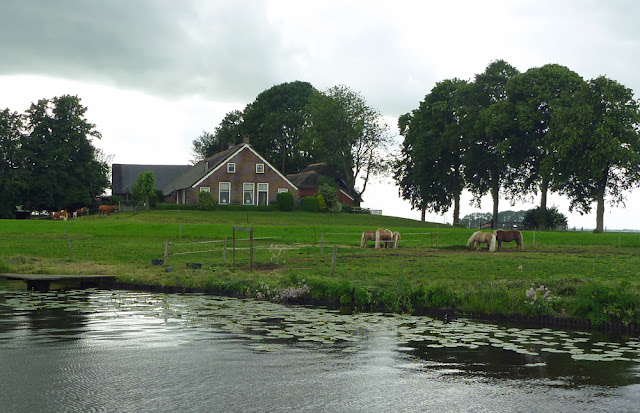 Along the way we wound a very sinuous route through idyllic rural scenery. 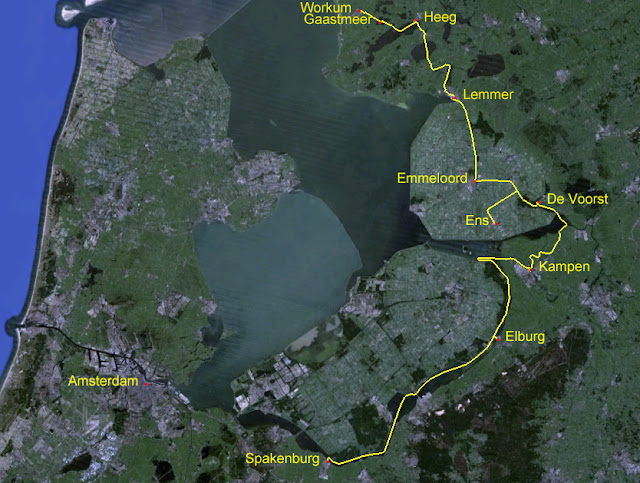 Although Kampen is only 10 kilometres from Ens, the water route we had to follow linked together several canals and lakes and took us 36.3 kilometres. We arrived in Kampen at 1825 and secured to the melden pier in Jachthaven Seveningen to fill with water, and were told we could remain in place on the pier overnight. 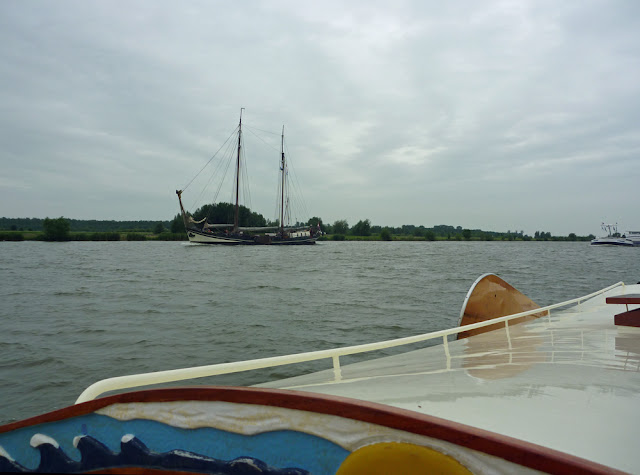 The distance from Kampen to Elburg is thirteen kilometres overland; however, the shortest water route is 32.1 kilometres. The route follows the IJssel downstream to the Ketlemeer, where it goes around the end of a long dike and heads in the opposite direction up the beginning of the Randmeeren, the chain of lakes between the old Zuiderzee coast and the newly formed province of Flevoland. There were many huge commercial barges on the IJssel, but also a few smaller vessels. 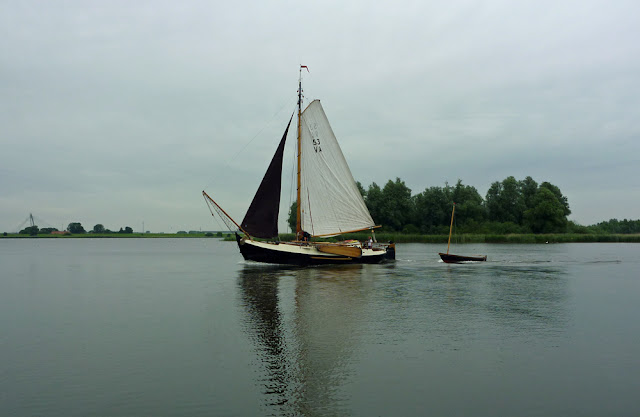 As we headed around into Drontermeer there was a rather steady stream of pleasure craft coming and going, many of them under sail in the stiff breeze. The weather continued cold and bleak, with heavy mist alternating with rain showers throughout the day. 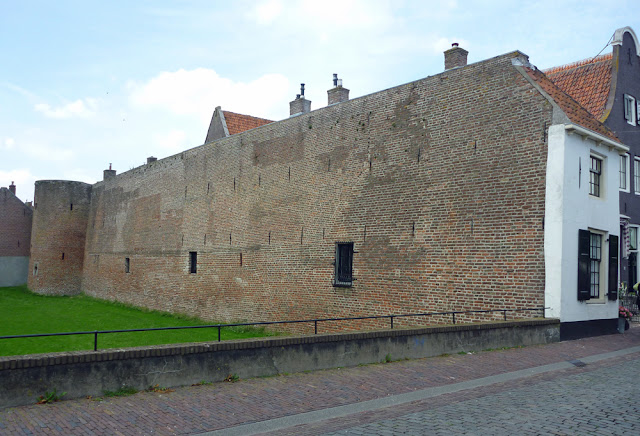 At 1305 we secured to the wharf in Elberg after a three-hour trip, the first part of which was aided by the current running in the IJssel. We cycled through the main gate of this medieval moated and walled city. 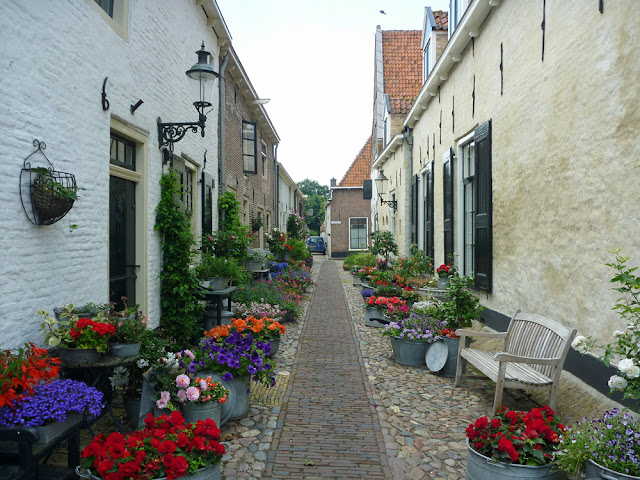 We admired the beautifully kept homes that abut the insides of the walls. The lanes are a profusion of flowers interspersed with patio furniture; the residents obviously enjoy their tiny front yards. 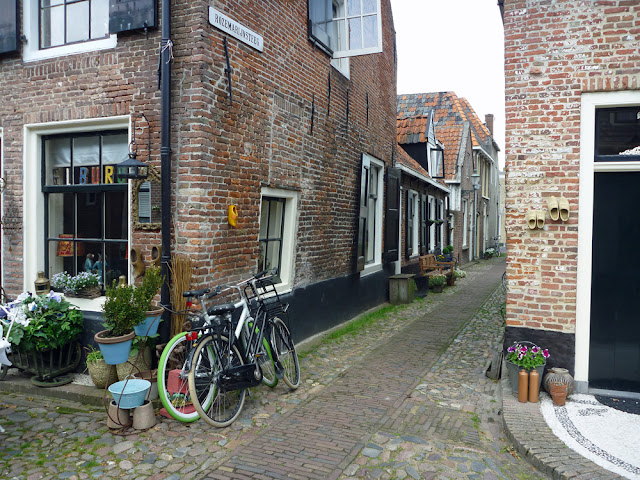 Lanes invited us to explore further into the old town. 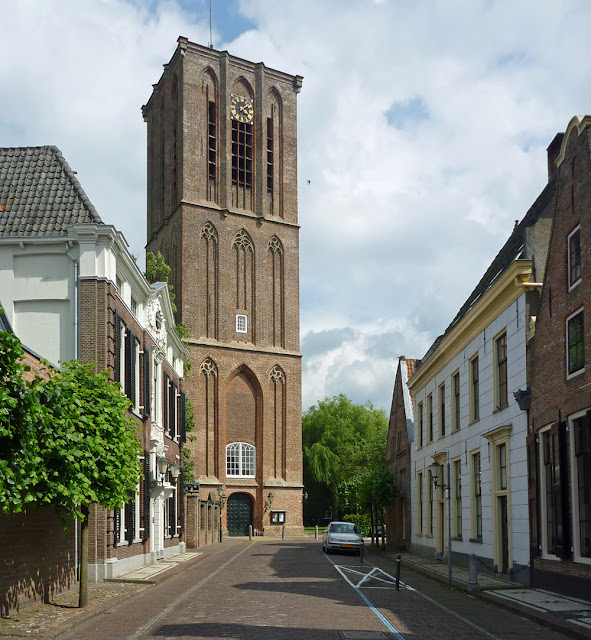 A fifteenth century church stands solidly among stately houses of the same era and earlier. We spent two days relaxing and enjoying this wonderful place. 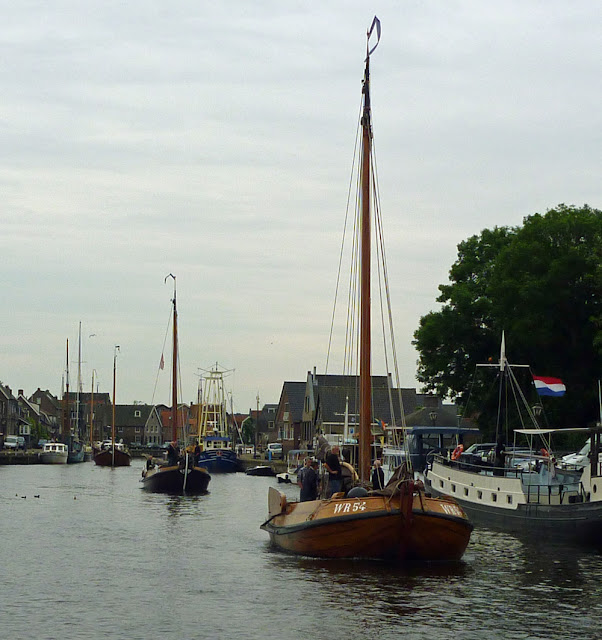 At 1035 on Tuesday the 2nd of July we slipped and headed out to continue our way around the Randmeeren. We followed the buoyed channel along Veluwemeer, passed through the open sluis at Hardewijk into Wolderwijd and followed its buoyed channel to Nuldernauw and then through Nijkerkersluis to Nijkerkernauw, which took us after a 42.6 kilometre day to Spakenburg. Not long after we secured to the wharf, a line of wooden botters paraded past. 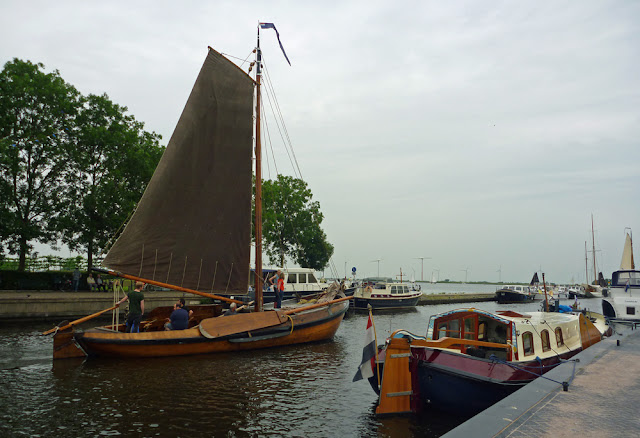 There are about forty of these marvellously restored and maintained old fishing boats here in Spakenburg, many of of them dating from the late nineteenth century. 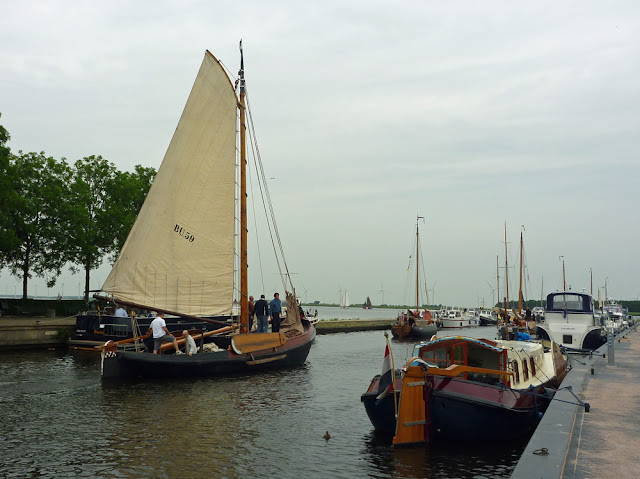 The botters were heading out for a regular evening sail on the Eemmeer. 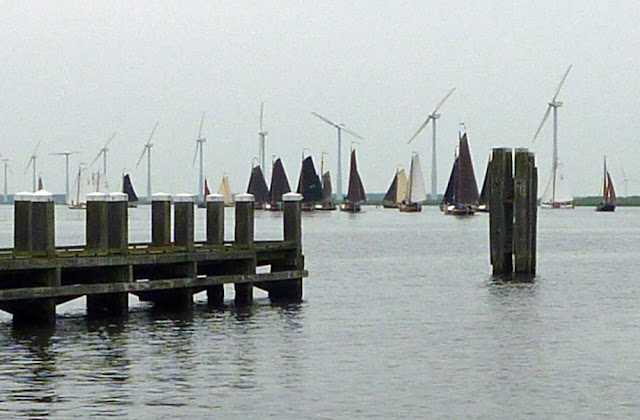 After we had watched about thirty of them go past Zonder Zorg, we walked out to the end of the dike to get a better view of them sailing on the meer. 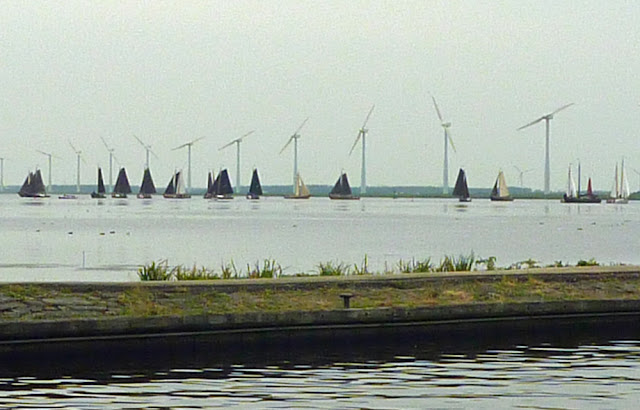 This is so dramatically different from an evening sail on Vancouver's English Bay that it seems we're on another planet. A few hours later, while we were having dinner aboard Zonder Zorg, the parade of botters came slowly past our salon windows. 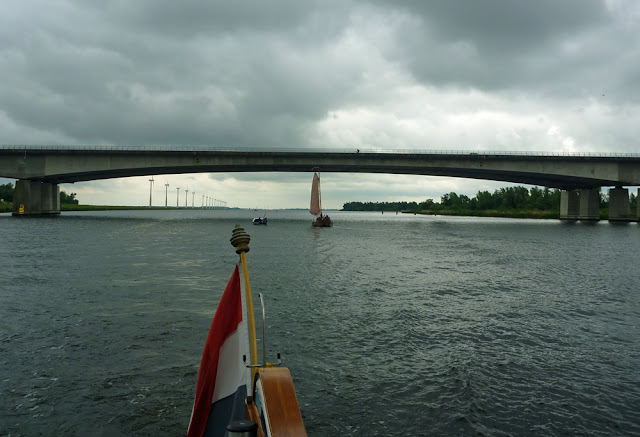 In a light drizzle at 1400 on Wednesday we motored out of Spakenburg and continued around the Randmeeren. First we went northward along Eemmeeer and then northwestward along Gooimeer and finally north under the Hollandsebrug and into the southern end of Markermeer. It was raining rather persistently and the wind was gusting into Force 4 from the northwest, the direction we needed to go. We decided to seek shelter on the south side of a tiny uninhabited island, named Hooft.

At 1620 we tied to small trees on a dilapidated wharf in a space among half a dozen quasi-derelict boats and two considerably more proudly owned ones. We were secured out of the wind for the night. It continued to rain. 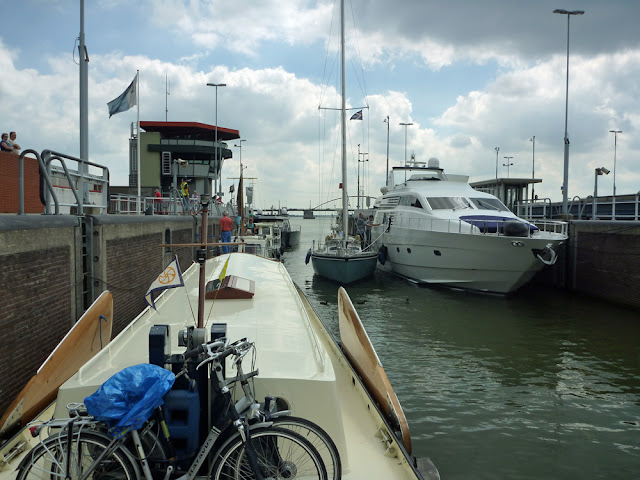 After a leisurely breakfast on Thursday morning, we slipped our lines and headed across Markermeer toward Buiten IJ and the entrance to Noordzee Kanaal. Marine traffic is nicely separated, with the central lanes for large commercial vessels and side lanes for smaller and recreational ones. The locks are also segregated, and we were the first to arrive and wait for the next cycling of the non-commercial side of Oranjesluizen. 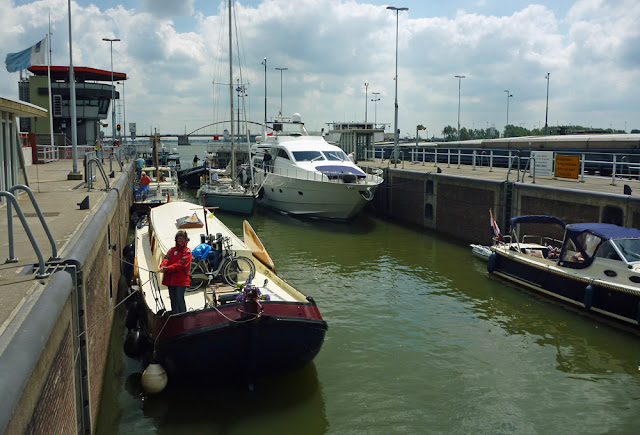 We waited for about fifteen minutes as the lock tenders shepherded nine boats of various ages, shapes and sizes into the chamber. After all the juggling, we were lowered only about 20 centimetres. 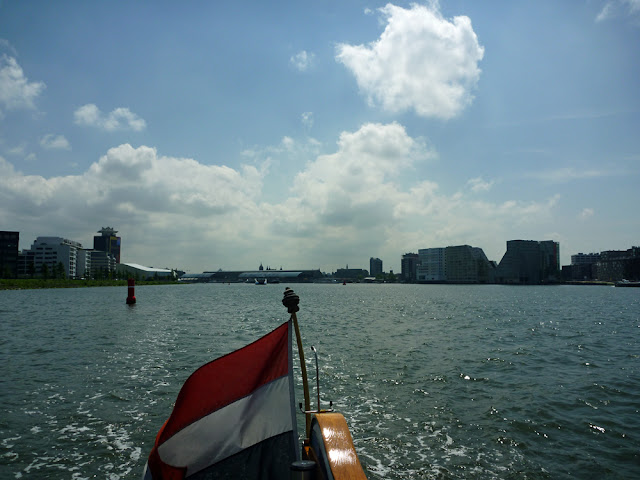 We were then in the Noordzee Kanaal, which leads across Amsterdam and out into the North Sea. We motored with heavy traffic past central Amsterdam under clearing skies. 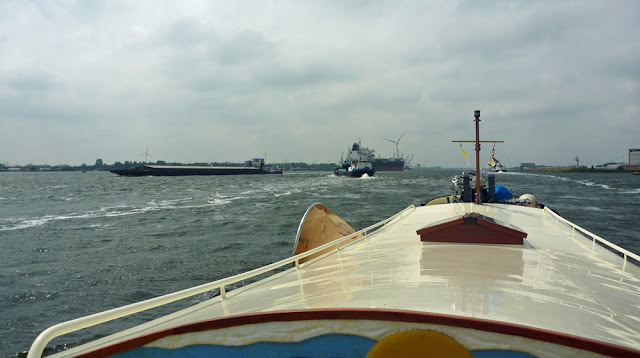 Westward, we were in the zone of the deep sea ships and passing the heads of many busy side harbours. Traffic became increasingly heavy and fast. 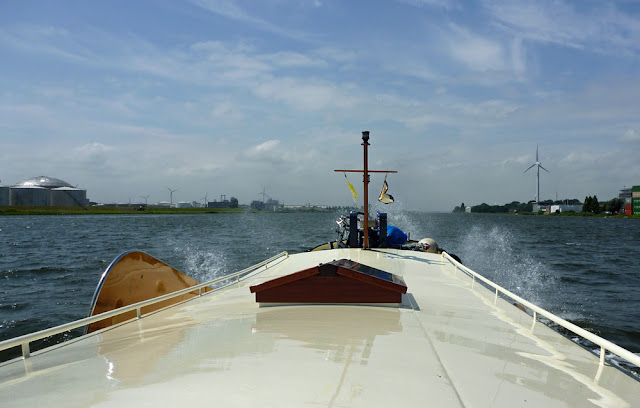 The wind built and we were butting into building chop. After about 30 kilometres we turned off the Noordzee Kanaal into Zijkanaal, which led us southwestward to Noorder Buiten Spaarne and onward into Haarlem. 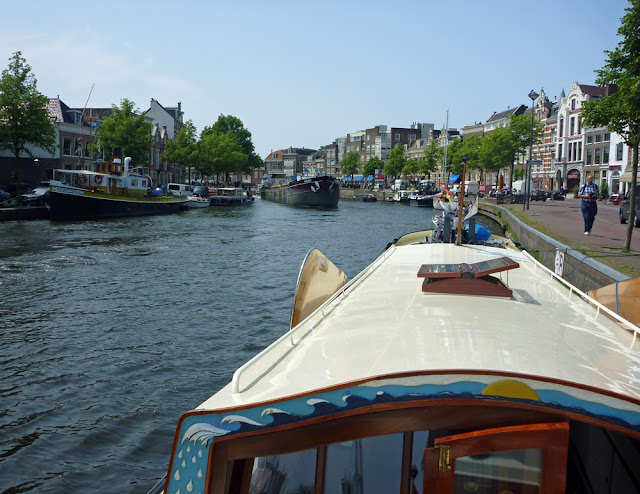 At 1651 we secured to the wall of the canal in the heart of the old city of Haarlem, at the foot of the street up which 150 metres is the magnificent Sint Bavokerk, which has dominated the city skyline for at least six centuries. Beside us is Teylers Museum, the oldest museum in the Netherlands. 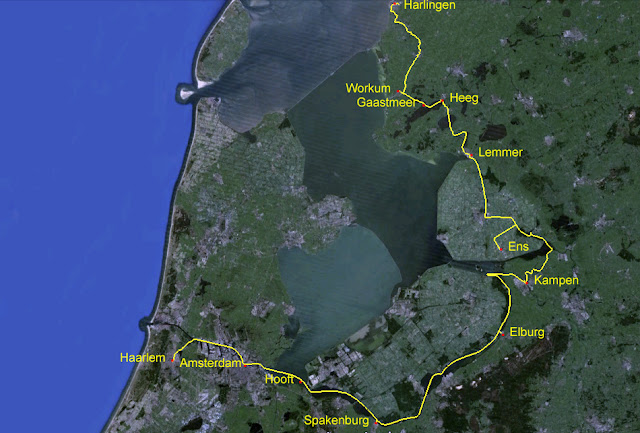 With Zonder Zorg in such a wonderful place, and with the weather finally looking a bit more summer-like, we have decided to pause here for a week and explore the area.
Posted by Zonder Zorg at 10:10