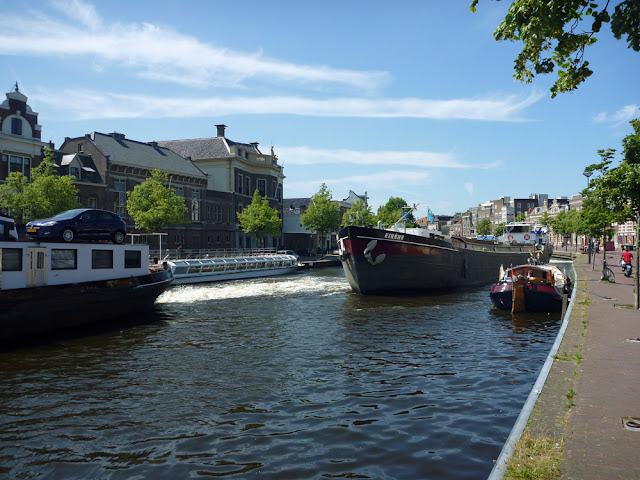 Monday again dawned clear, and the day quickly warmed into the mid-20s. We remain secured to the canal wall in central Haarlem and our entertainment from the cockpit is supplied by the antics of the many rental boaters. We are always a tad nervous when rental boats approach; fortunately, most of these are small and cannot inflict much damage. Eight or ten large commercial barges pass by every day, but even though they could cause huge damage, they give us no concern; their skippers are very competent. 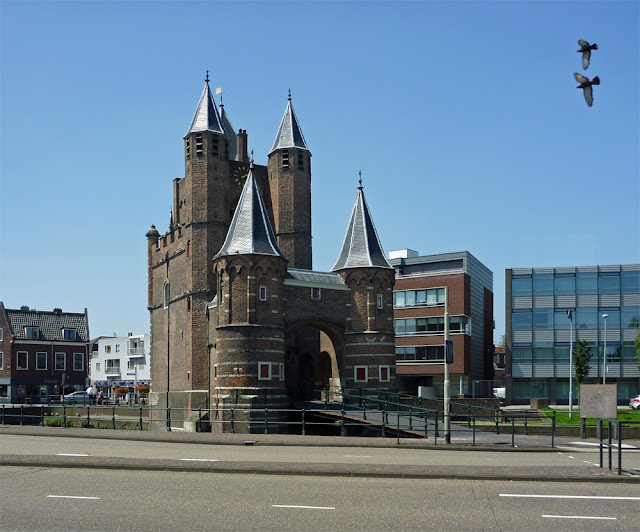 In the afternoon we pedalled up into the industrial area to the northeast of the city centre. We were looking for the last few bits and pieces for Zonder Zorg. We followed signs to Gamma, the Dutch answer for HomeDepot, where we picked out a few small items and a three-metre diameter patio umbrella for the cockpit table. With the umbrella strapped to my bike, we took a shorter, more scenic route back, which led us through the old Amsterdamse Poort, one of the few remaining pieces from the fourteenth century walls, which had been removed in the seventeenth century as the city expanded. 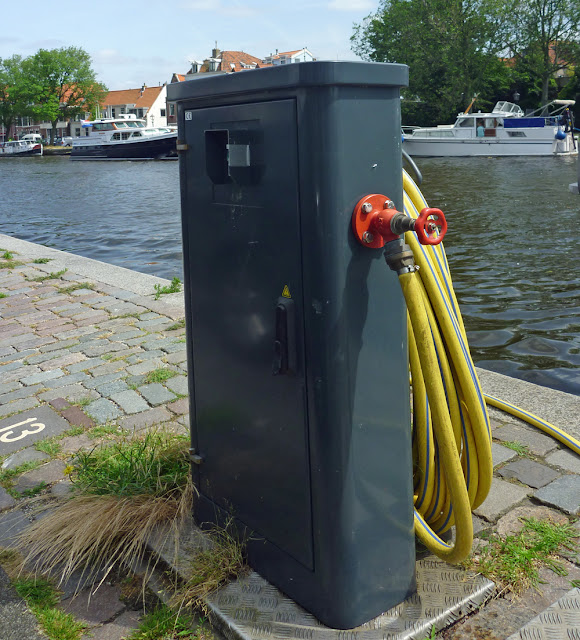 Just before noon on Tuesday the 9th of July, we slipped from our wonderful mooring spot, turned in the narrow canal and headed back downstream. We passed under Gravenenbrug and Catharijnebrug, then turned about again to secure on the fuel barge. We took on 100 litres of diesel for €155, delighted with how much easier it is to refuel here, compared to the endless hassles we had endured in South America during our three years cruising there. We then moved back under Catharijnebrug and around the bend, where we secured to the wall next to the water point. We filled the tanks for only the second time since we had left Harlingen on 19 June, an average of ten days per fill. 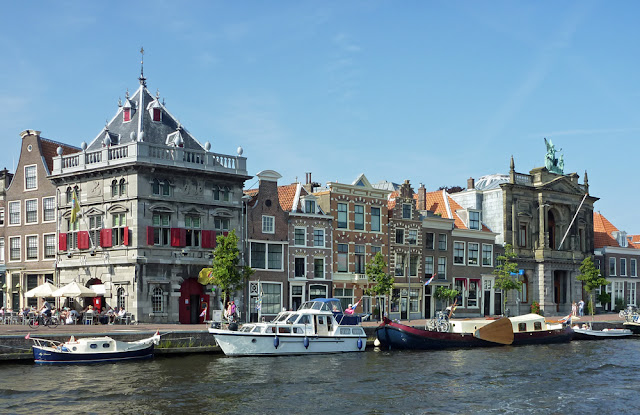 Within an hour we were secured back in our great spot on the wall. We had chosen to do our replenishing trip at midday because since our arrival, we had been observing that boaters usually leave mid-to-late morning and seldom settle-in until mid-to-late afternoon. We wanted our spot back, and Zonder Zorg was again centred between De Waag and Teylers Museum. 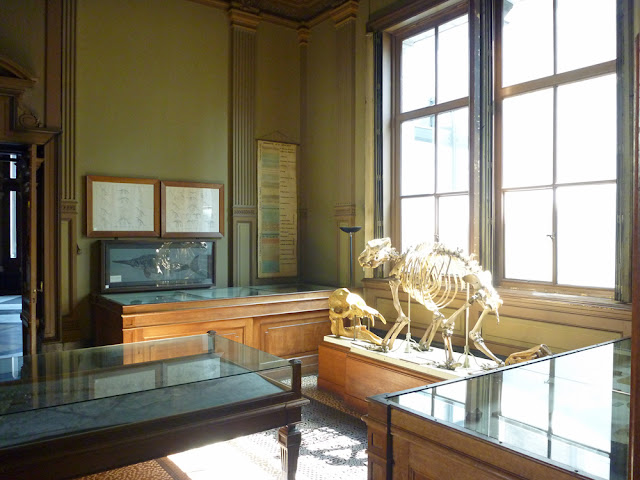 For six days we had looked up from our cockpit at the imposing facade of the museum, and we could no longer postpone a visit. The guard accepted our now ten-month-old museum passes and gave us free admission to the oldest public museum in the Netherlands. It was founded in 1778 to honour the last will of Pieter Teyler van der Hulst (1702-1778), a wealthy linen manufacturer and banker of Haarlem. He had been intensely interested in the sciences and the arts and had a vast private collection. His collection formed the initial content of the museum. 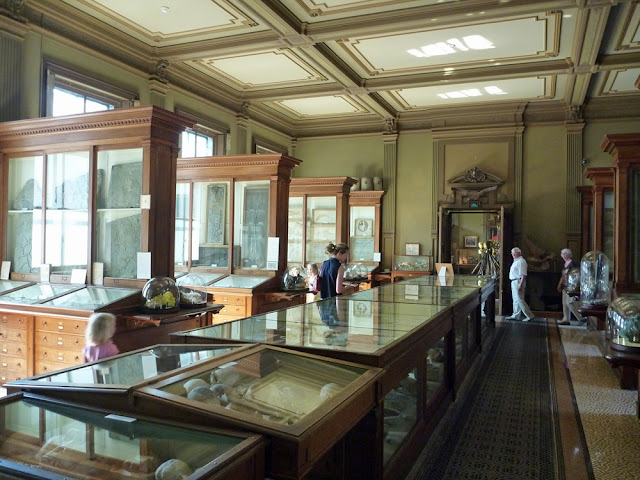 Immediately we entered the first display room, we were transported back in time. The displays have been organised and maintained in the same style for more than two centuries. We were effectively in a museum of a museum. 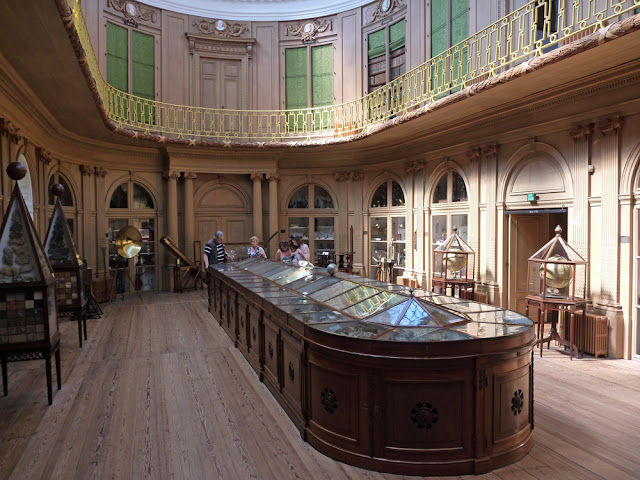 To house the collection, the executors of the estate commissioned Leendert Viervand to design “a cabinet of books and art” in the rear of Teyler’s former residence in Damstraat. The Oval Room was opened to the public in 1784. 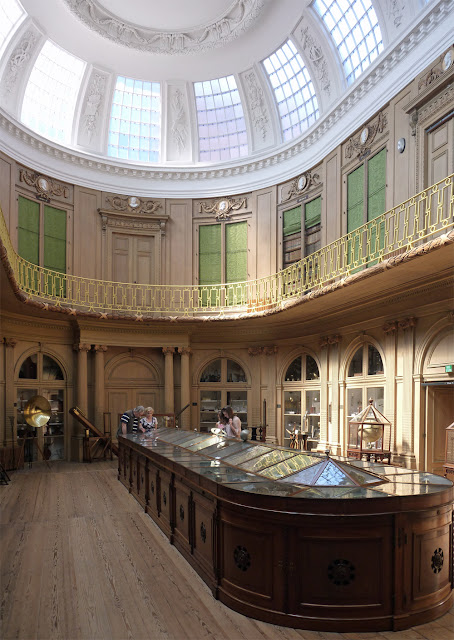 It is an impressive space, with cabinets around the walls to display physics instruments. The original pyramidal cabinets are still used to house globes, and the central display cabinets are filled with fossils and minerals. The cupboards beneath the central cabinets originally housed the portfolios of the art on paper collection. A part of the library was kept in the bookcases on the upper level. The room is today kept much as it was when it opened in 1784. 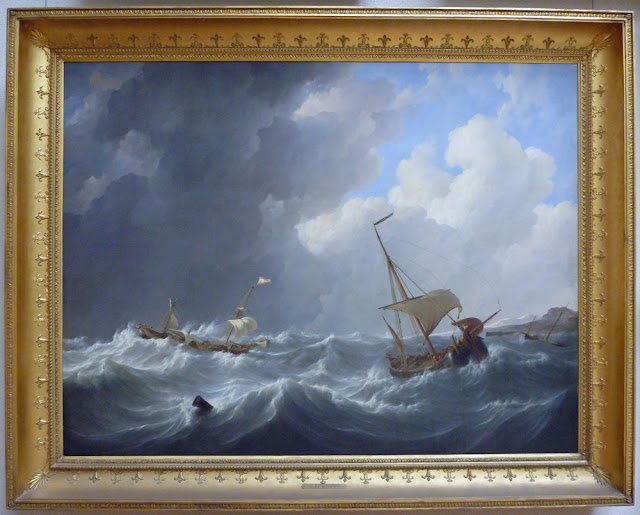 In 1821 the museum purchased its first painting by a contemporary artist and the directors began planning a room for the display the work of “living Dutch masters”. The Paintings Gallery was built and is dedicated to paintings from the last quarter of the eighteenth century through the first half of the nineteenth.

The impressive facade along the canal was designed by the Viennese architect Christian Ulrich and built as a centenary project in 1878. Rooms behind it, linking to the original Oval Room and Paintings Gallery were designed by Haarlem architect Adrianus van der Steur. 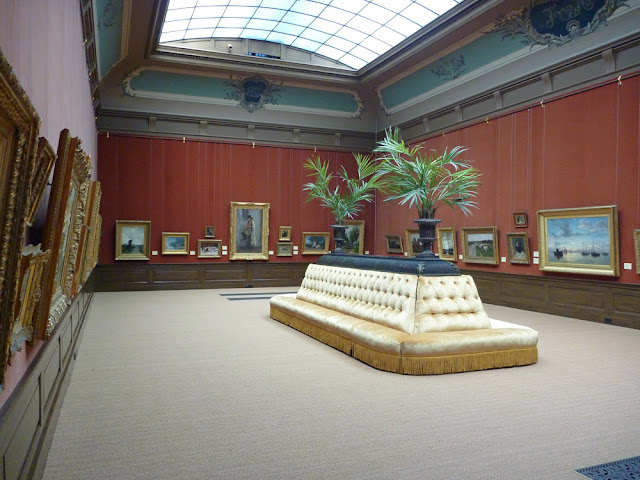 With the rapid expansion of the art collection through the nineteenth century, Paintings Gallery II was built and opened in 1893. This room now displays paintings from 1780 to 1930. The museum has continued to expand, and it now is composed of twelve display rooms, two coffee shops and a gift shop. 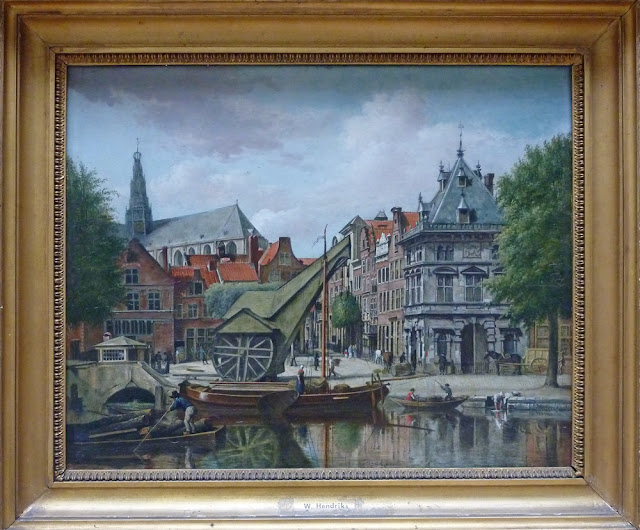 Among the many fascinating paintings in the galleries, this one of De Waag stood-out. Along Damstraat, the street leading away from the canal, next to the small tree at the centre, is the house in which Pieter Teyler had lived. In its back gardens was built the original museum, the Oval Room. The bow of our skûtsje, Zonder Zorg is currently about where the large tree on the right stands. The dual treadmill crane stood on the quayside for four centuries. 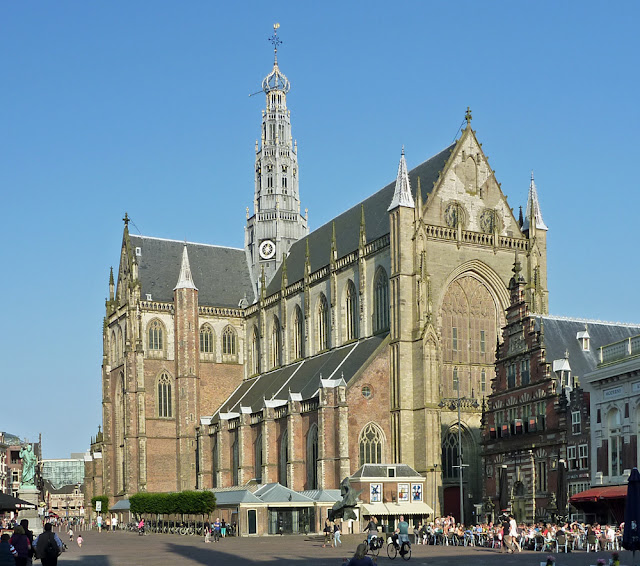 In the evening we walked the three blocks past Sint Bavokerk and into Grote Markt to catch the late day sun on the north and west facades of the church. The bells in the steeple were alive with an evening carillon recital as a prelude to a free organ concert, which was scheduled to begin at 2015. 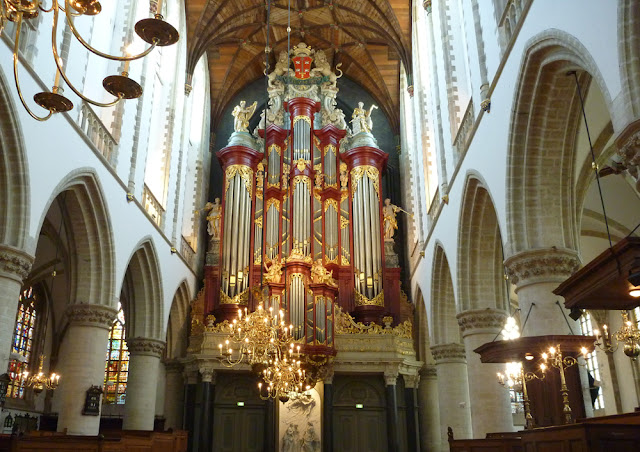 We arrived inside the church about twenty minutes before the concert and had our choice of seats, so we sat as close as we could determine was the acoustical centre of the huge space. The chairs had all been turned around, and we were facing the organ, with our backs to the altar. 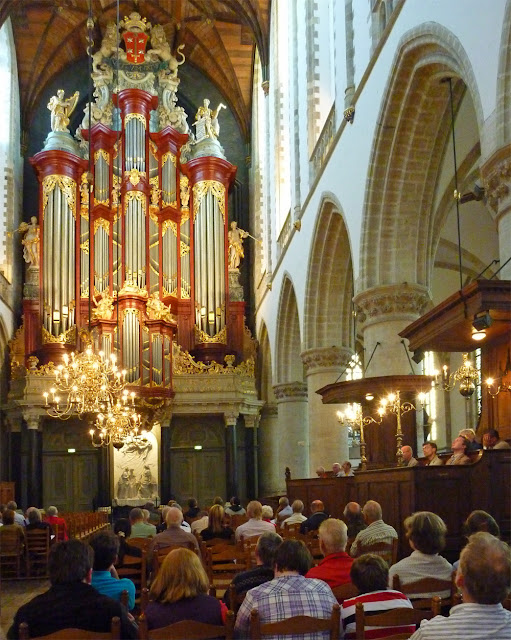 Very shortly the church began filling, and with most arrivals settling-in very near us, we confirmed we were near the epicentre. Without announcement, the guest organist, Thomas Trotter began playing, and continued for over an hour, interrupted only by the few seconds needed to change music scores. The huge instrument shook the bats out of their slumbers and they fluttered about above us as we were transported into wondrous realms by the music. As the concert progressed, increasing flocks of birds swirled outside past the upper windows. The only sound other than the organ was the long standing ovation at concert end.

Back onboard we counted our blessings as we dawdled over an assortment of cheeses, salamis, olives and breads with glasses of wine. We love this lifestyle.