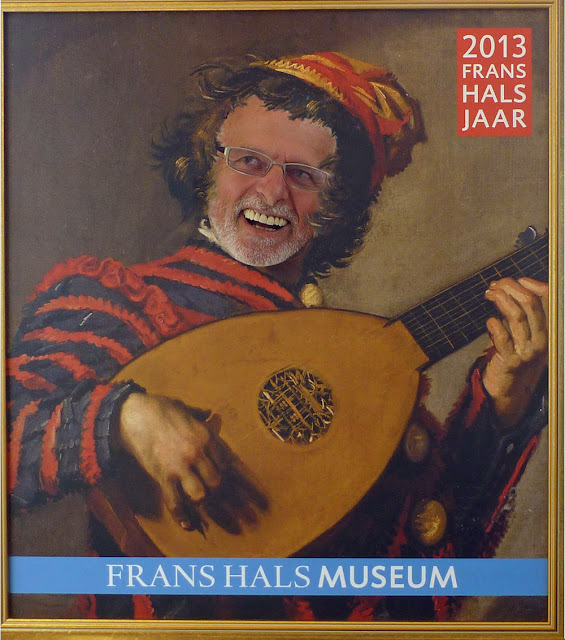 We had spent a wonderfully relaxing eight days in Haarlem, absorbing the culture and history of the city. As enjoyable as the city is, we decided it was time to move on lest we be painted into the scene. 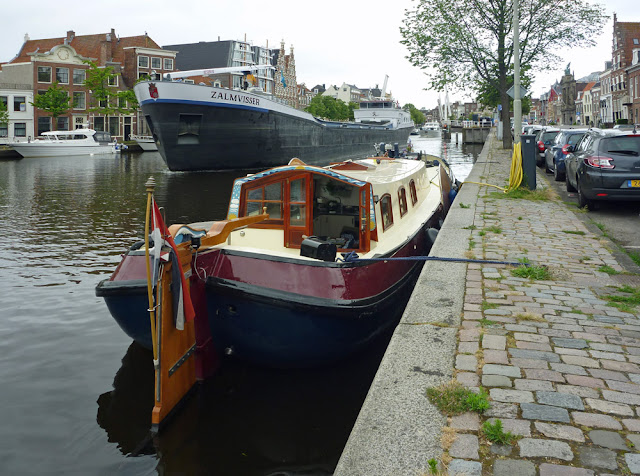 At 1025 on Friday the 12th of July we slipped from our wonderful mooring in central Haarlem, turned in the narrow canal and went back under Gravenenbrug to the watering point. Although our tanks were still well over three-quarters full, we decided to top them off before continuing our voyage. The habit we want to get into is topping-up the tanks at every reasonable opportunity, to give us as much independence as possible. 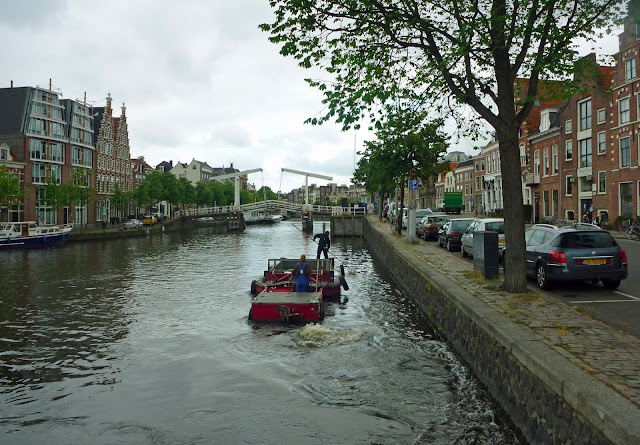 While we were filling, two large commercials came through heading downstream. Also in the canal nearby was the regular flotsam cleaning barge. We have seen it making regular runs a few times each day, cleaning detritus from the canals of the city. 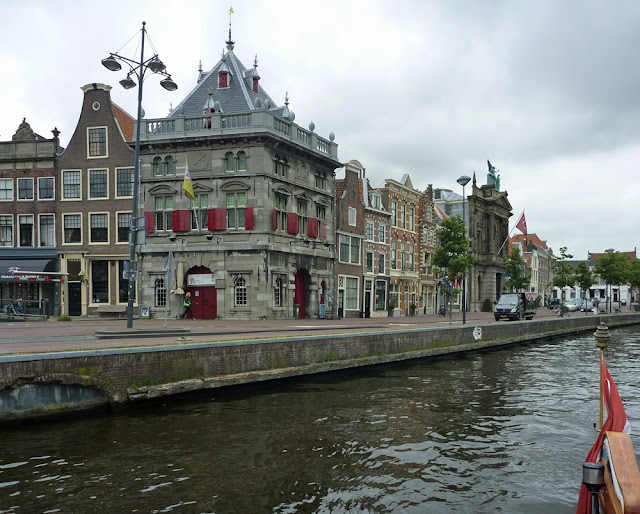 With our water tanks full, we turned again and headed upstream back under Gravenenbrug and along to Melkbrug, where we waited for the bridge to be swung open for us. Its clearance is listed at 2.0 metres above the water, and with Zonder Zorg’s air draft not yet accurately measured, but thought to be two or three centimetres either side of two metres, we decided to join the line of other waiting boats, rather than trying the yellow light lane. One of our priorities is to measure the barge’s height, but until we do, I am assuming it is 2.10 for safety. We waited next to our mooring spot of the past week, in front of De Waag. 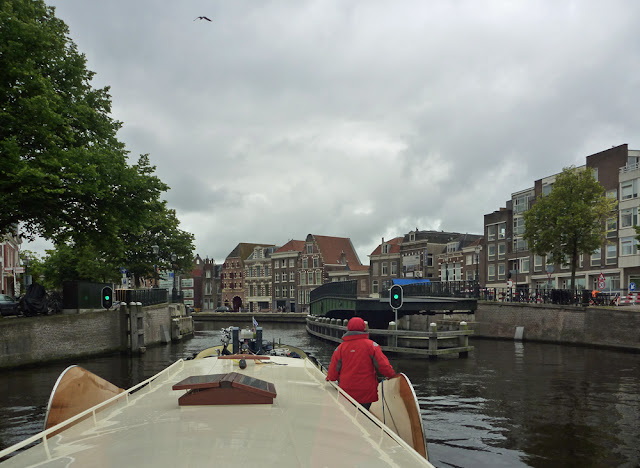 As we passed the swing span on our way through, I tried to gauge our clearance by sighting across the bottoms of the bridge deck beams. With the distance and the movement, it was too close to call. 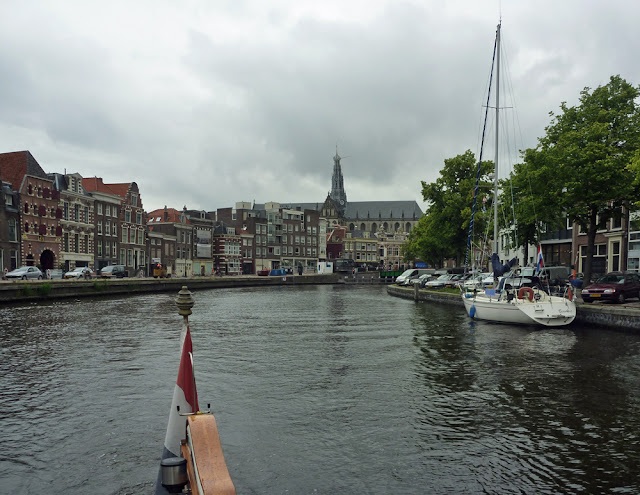 Once clear of Melkbrug, we looked back at the skyline of old city, dominated by Sint Bavokerk. What a splendid time we had here. The eight days were so full, and we will long cherish fond memories of our time in Haarlem. 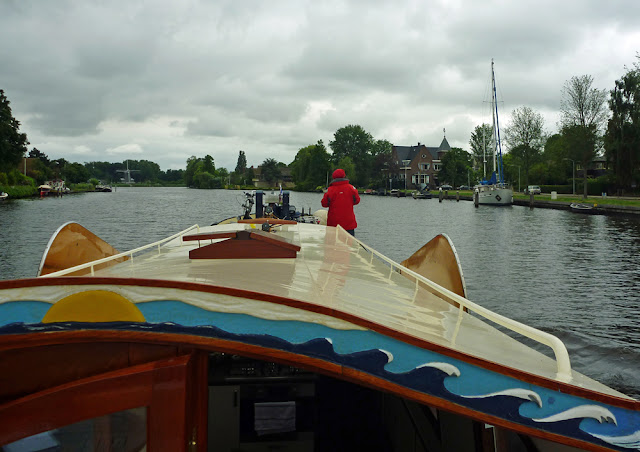 We followed the Zuider Butten Spaarn to its junction with Ringvaart van de Haarlemermeerpolder, which we followed southwestward. Along the way we passed first through mainly pasture land, then increasingly past flower farms. There were grazing cattle and sheep, windmills, stately homes and small villages. We were able to pass under seven of the ten bridges in the next twenty-two kilometres, most of them being 2.2 to 2.4 metres high. However, we had to join a parade of boats moving through one metre and lower lift bridges in Zwanshoek, Hilegom and Lisse. 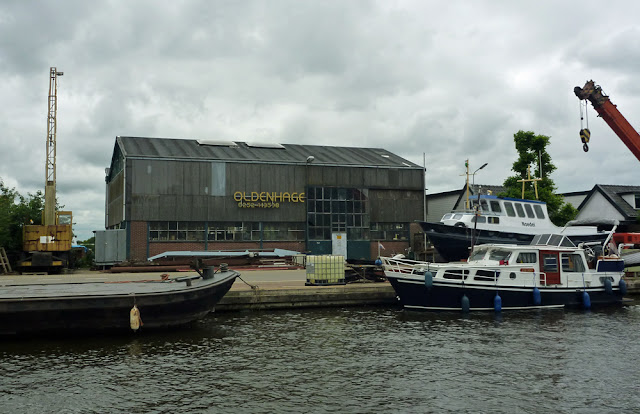 As we passed through Lisse, Edi commented on a sign on a boatyard building. The name was familiar to us, but for a short while we couldn’t think why. Then we remembered that Henk and Mady had bought our skûtsje, when she was named Nieuwe Zorg, in 1975 from Oldenhage in Lisse. 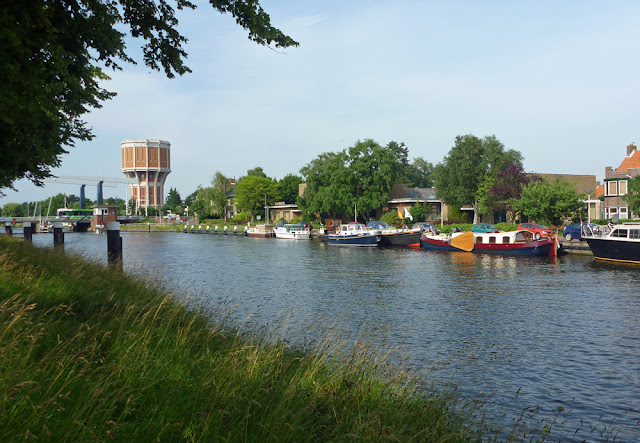 We continued through Lisse another four kilometres to Kagerplassen, which we crossed and entered the Rijn-Schiekanaal, which led us into Leiden. We passed the junction of Oude Rijn and then Nieuwe Rijn, where 200 metres beyond Wilhelminabrug, we saw a space just barely large enough for Zonder Zorg on a free mooring wharf on the right bank. We turned in the narrow canal and squeezed in with little more than a metre to spare fore and aft. It was 1445 and we had come 30.7 kilometres from Haarlem. 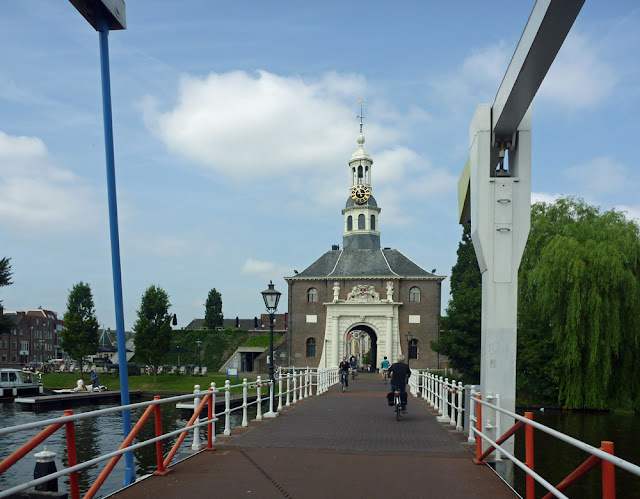 On Saturday morning we pedalled into the old city. We didn’t find the charm we had enjoyed in Haarlem, possibly because here we were moored well beyond the old city. Itinerant moorage at the edges of the old walled city is crammed and late morning we could see no available spaces. Even had there been any, there appears to be none for boats much over 12 metres in length. Further in, the all the canals in the centre of town have fixed bridges well under 1.5 metres high, so this precludes use by most cruising boats. 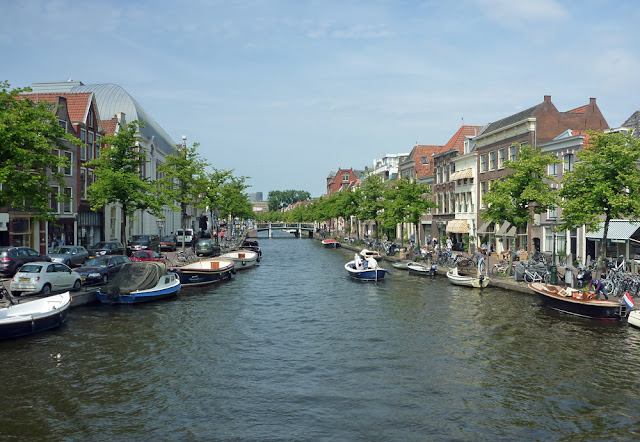 In the afternoon we pedalled northward along the Rijn-Schiekanaal to a large marine supply store we had seen on our way in the previous day. We finally found two 20-litre jerry cans; we had been searching in vain for weeks. Marine fuelling stations in the Netherlands charge 15 to 25 cents more per litre for diesel than do the road filling stations. The explanation is that they have higher expenses.

We have often seen road gas stations within a minute or so’s walk of a suitable temporary canal-side mooring, so our thought is to take advantage of these as we find them. Depending on the ease of the location, we can add two or more jugs to the tanks, saving €3 to €5 per jug. With rather nice wine available for around €4 the bottle, our liquid assets will be better served.
Posted by Zonder Zorg at 02:24