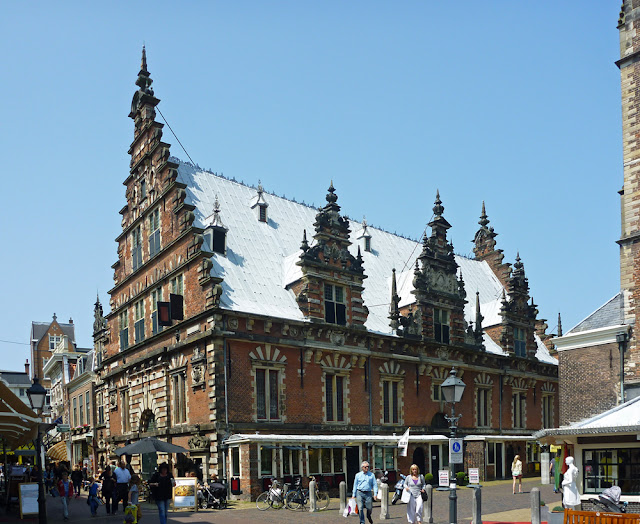 With Zonder Zorg secured on the wall in central Haarlem, we paused. During the four weeks since we had arrived in the Netherlands, we have been going rather steadily, moving into Zonder Zorg and making her our home. While we still have some fine tuning to do, we are now finally ready to slow down and enjoy. 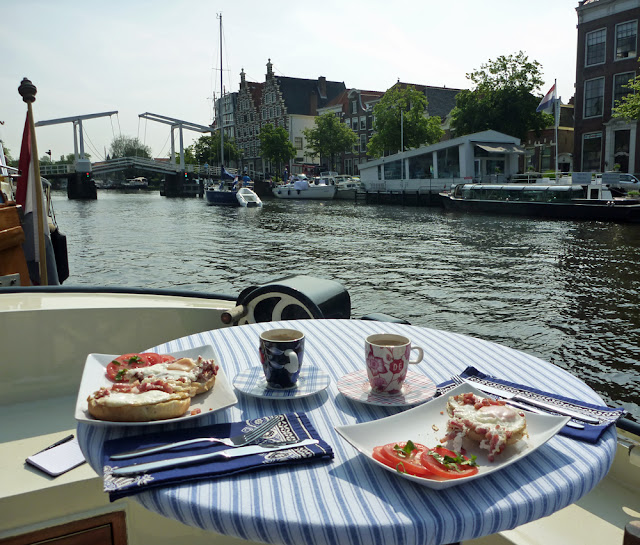 We enjoyed a leisurely breakfast on Friday morning, watching the passing parade of boats in the canal. We are just upstream of Gravestenenbrug, a small pedestrian and bicycle bridge that opens with a double bascule. It is 3.45 metres above the water in the centre, but toward the sides of the 10.7 metre span, the clearance is not much more than 2 metres. All the local tour and rental boats pass easily under it, as do many of the pleasure cruisers and barges. 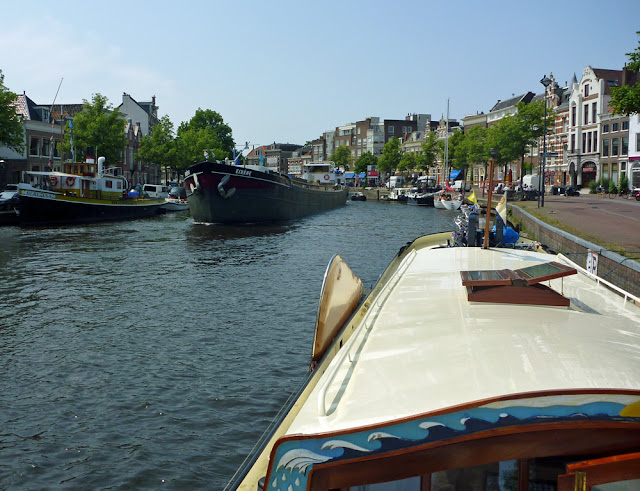 Sailboats, of course need the bridge lifted, as do the large commercial barges. We watched as an unladen 40-metre barge came around the corner and slid by. 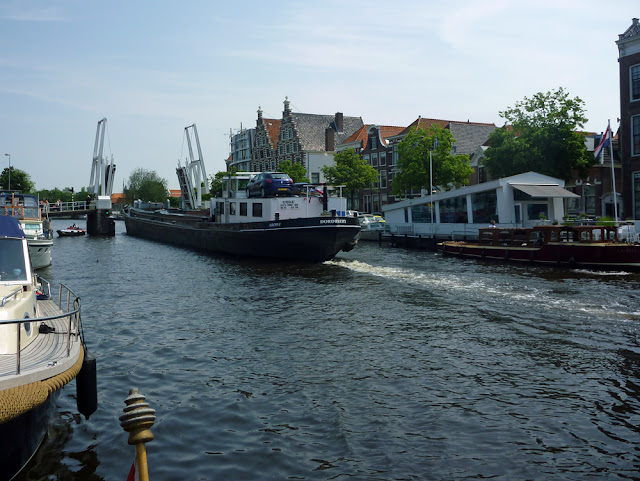 The brugmeister from Melkbrug, the swing bridge just upstream of us, opened Gravestenenbrug and we watched as the barge from Dortmund glided through. 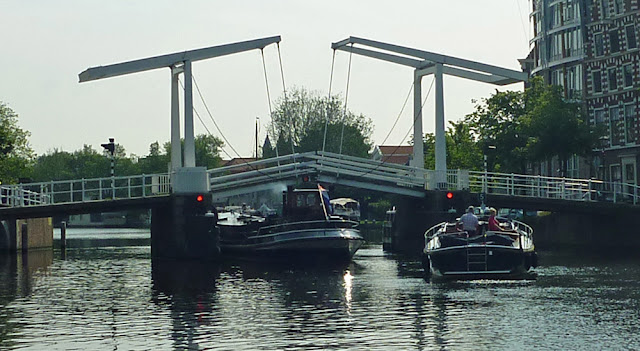 We were midway through our breakfast when a converted luxemotor passed us heading downstream toward the closed Gravestenenbrug. I immediately spotted its navigation sidelights fixed to the top of the wheelhouse somewhat like Mickey Mouse ears. They looked to high to make it under the sloped bridge decks. As the barge approached the bridge, the crew went forward to lower the burgee mast, but the skipper ignored the nav lights until the last moment. With a belching of diesel smoke, he managed to stop before any significant damage was done. A standard pleasure boat height for France is 3.40 metres to fit under the usual 3.50 bridges, so I assume that the skipper, reading the 3.45 metre clearance on the chart, considered he would clear. After an embarrassing pause, the bridge was lifted for him and he continued down canal. 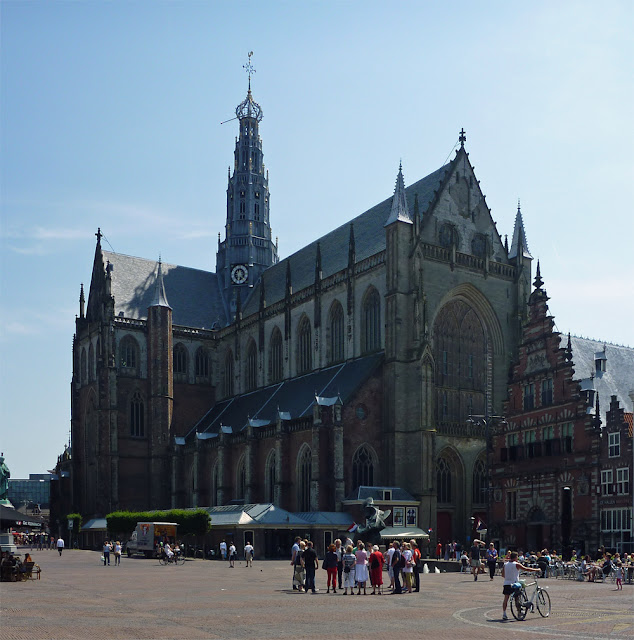 We finished breakfast without any further excitement and in the late morning we went walking in the old city. The sun angle on Sint Bavokerk was not at its best, and we told ourselves that we will have to come back in the early morning to get a better lit shot from Grote Markt, the only clear view angle. The narrow streets and tall buildings in the heart of the old city block views from other directions. 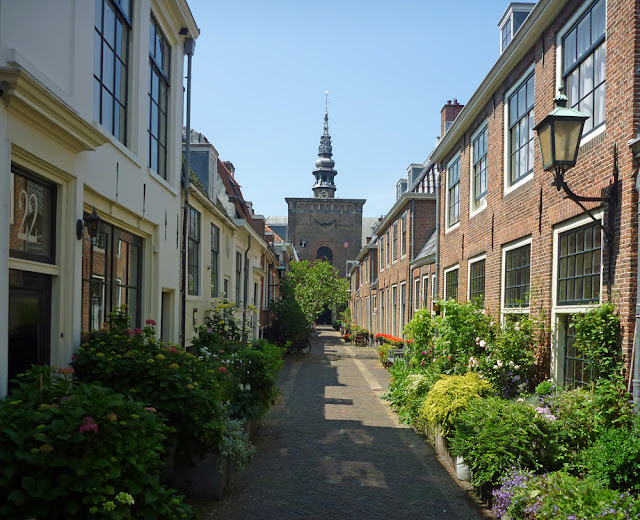 We wandered the many walking streets, which are lined with a grand selection of shops of mid-to-upscale merchandise. Not being in a shopping mode, we concentrated on the small lanes that weave a maze between the larger, though still narrow streets. Up one of these lanes we sighted Nieuwe Kerk, the new church which dates only from 1649. 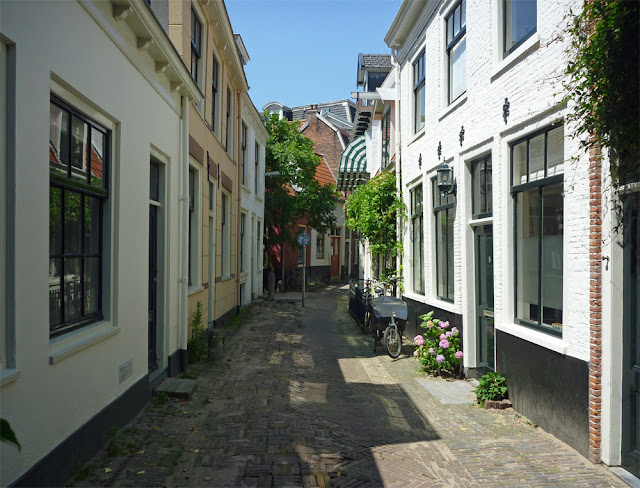 Other lanes curved and wound their ways into tighter and tighter spaces. 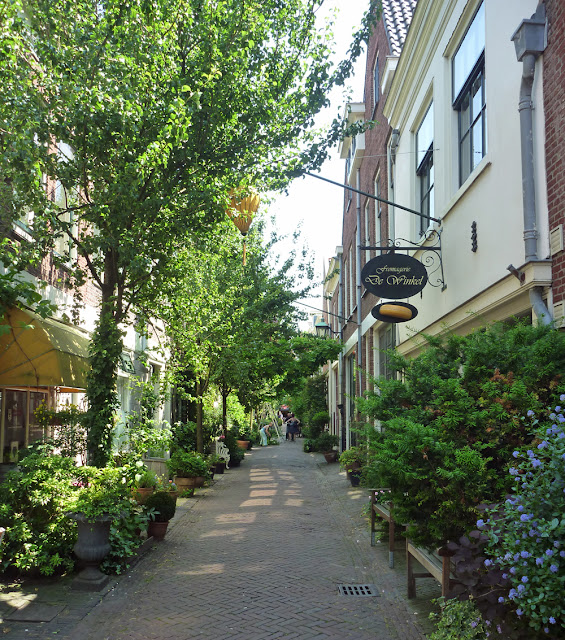 All the lanes we saw were well maintained and exuded their owners’ pride. 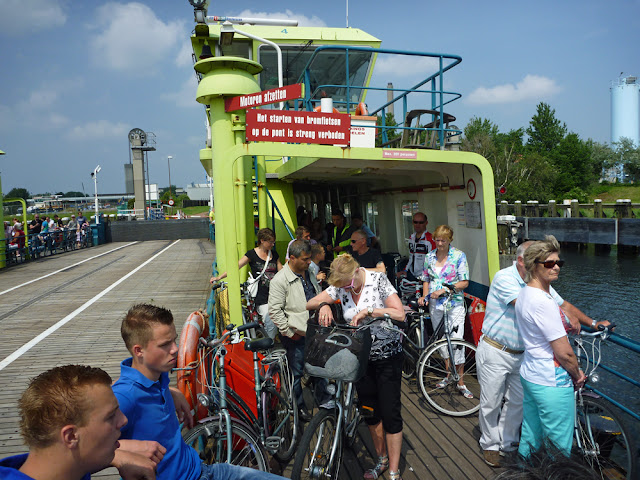 Late morning on Saturday the 6th of July, we hopped on our bicycles and pedalled northward out of Haarlem. We followed wonderful bicycle lanes and paths to and through Santpoort, Driehuis and Ijmuiden and came to the Noordzee Kanaal. With many dozens of others, we boarded the ferry for the free ride across the waterway. A sign on the ferry gives the maximum passenger load of 300, and it looks to have room for fifteen or twenty automobiles on its car deck. The ferry appears to shuttle back-and-forth with its only scheduling criteria being that everyone waiting has boarded, or that the ferry is full.

On the other side, we followed the cycle route signs to Beverwijk and then to Wijk aan Zee and pedalled past the house in which Edi was born. We continued up onto the dunes, and overlooking the North Sea, we paused on a restaurant patio for croquette broodje en bier to refresh ourselves from the eighteen kilometre ride.

After a wander among the dunes, we retraced our route back to Haarlem, pausing along the way to buy some fresh sole filets from a canal-side shack, which we had been told was the best place to buy fish in Haarlem. 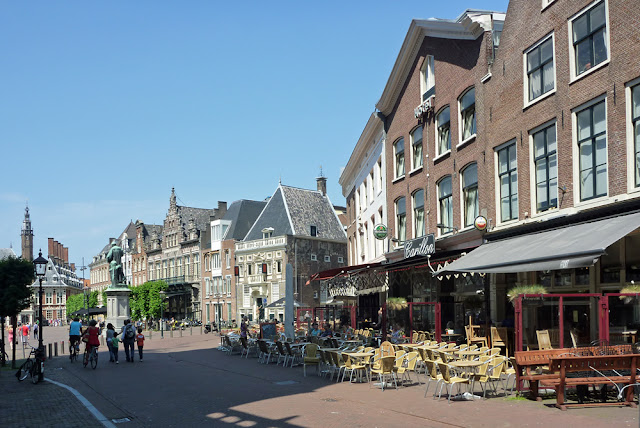 On Sunday morning we dawdled over breakfast and were again too late in Grote Markt to get the sun on the east side of Sint Bavokerk. We did; however, have fine lighting for the buildings to the north and east sides of the square. 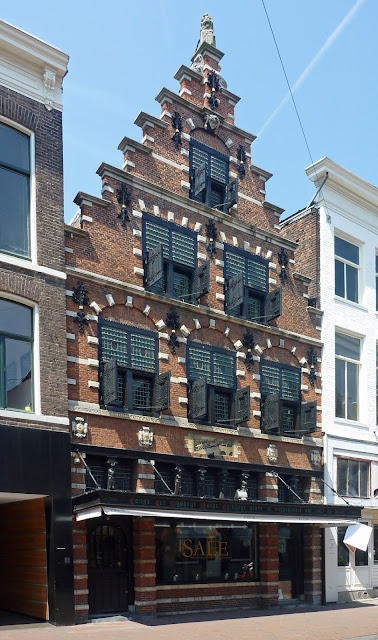 We continue to be amazed by the wonderful old buildings here. Their ornate facades display the obvious wealth that existed here during the sixteenth and seventeenth centuries. 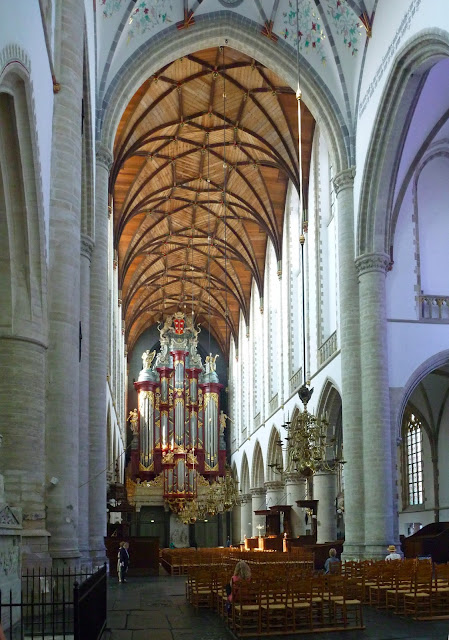 After we had roasted in the midday sun, we went into Grote Sint Bavokerk to cool off. This was once the Catholic Cathedral of Haarlem, but in 1579 it was taken-over by the Protestants. The interior is finely decorated and the entire floor is made up of grave markers. Most noteworthy in the interior is the immense pipe organ, which was once the largest in the world. Herman Melville, in Moby Dick compared the inside of the whale’s mouth to the pipes of the Haarlem organ. 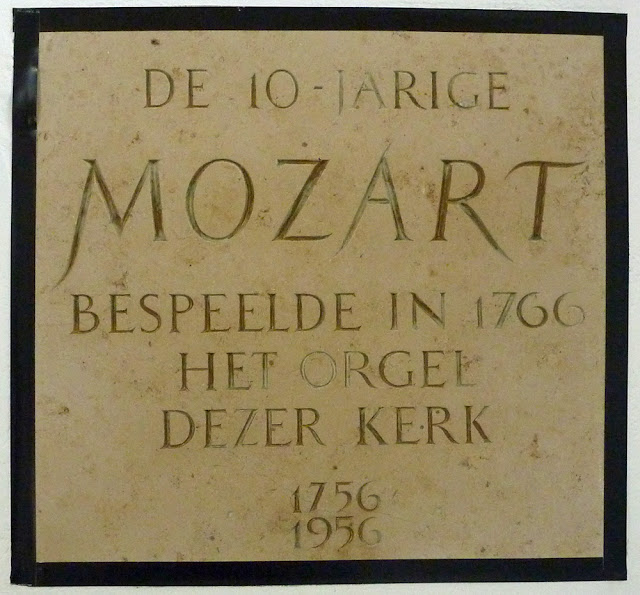 Many famous musicians have played this organ, among them Händel, Mendelssohn and Mozart. On the rear wall, beneath the pipes, is a plaque indicating that the ten-year-old Mozart played it in 1766. 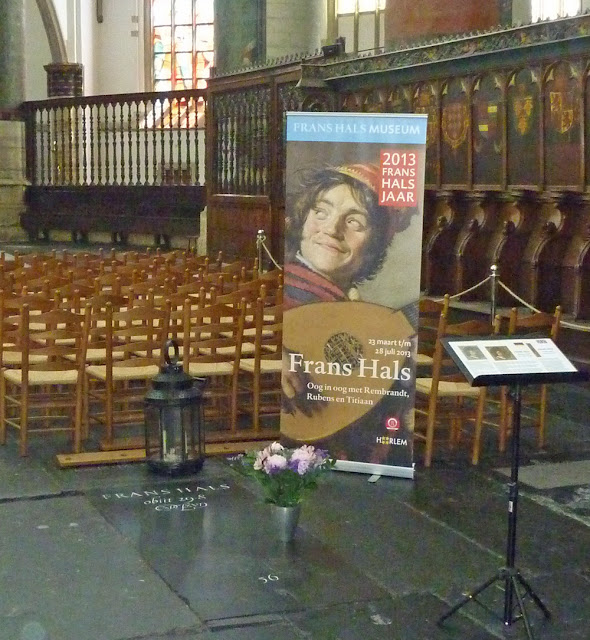 Also toward the altar, among the many hundreds of grave markers, is the tomb of Frans Hals, the most famous painter of Haarlem. It was easy to find, with an advertising banner from the Frans Hals Museum standing over it. The banner announced a special exhibition comparing the painting style of Hals with those of Rembrandt, Rubens and Titian. We had already planned to visit the museum in the early afternoon, and this spurred us on. 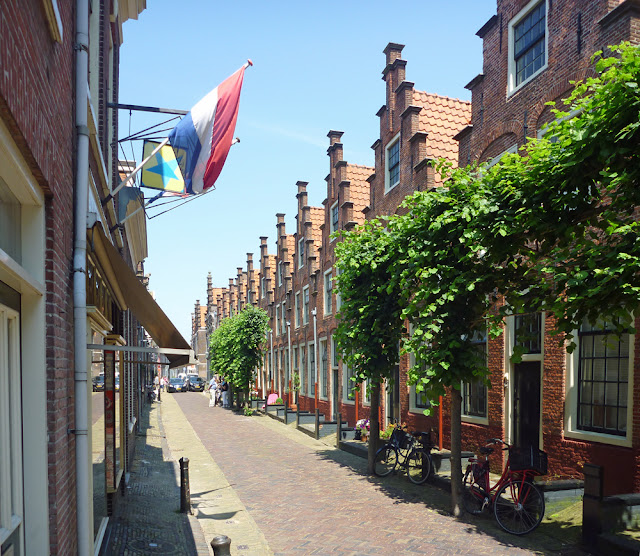 We followed Grote Houtstraat for three blocks past the fashionable shops, then turned along Gedempte Oude Gracht a couple of blocks across to Groot Heiligland, which we followed past lines of row houses. These were once the city’s old folks homes. In one of them Frans Hals lived late in his life, and a series of them have now become the Frans Hals Museum. 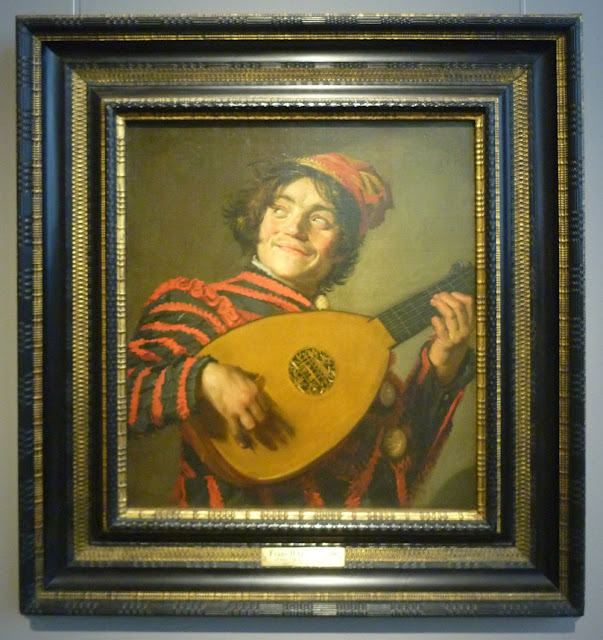 Frans Hals was broadly admired early in his painting career for his bold approach, with large single brush strokes and for his rare ability to capture facial expressions, particularly smiles. He was also acclaimed for his ability to paint directly, without the need for preliminary outlines and sketches. His paintings are alive and fresh, particularly when compared to those of most of his contemporaries and predecessors. 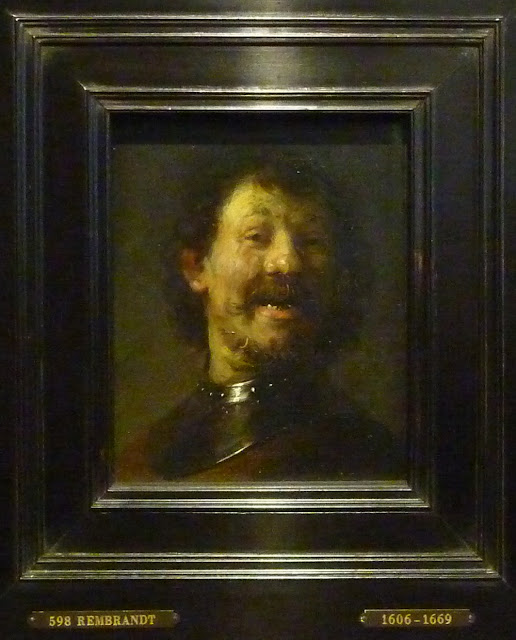 Rembrandt, later in his painting career, adopted some of this bold and more casual brush stroke style. 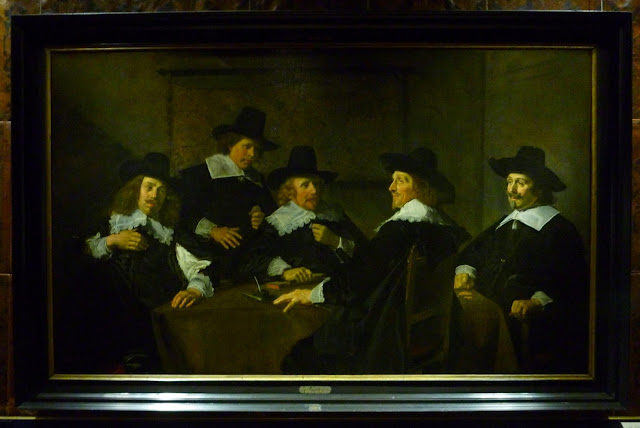 Among the many paintings by Frans Hals in the museum, I was intrigued by this one of the Regents of the St Elizabeth Hospital of Haarlem. Halls had been commissioned to paint an official portrait of them in 1641, and I wondered whether any of these men were still serving when, years later Frans Halls appeared before the Regents for admission to the home. 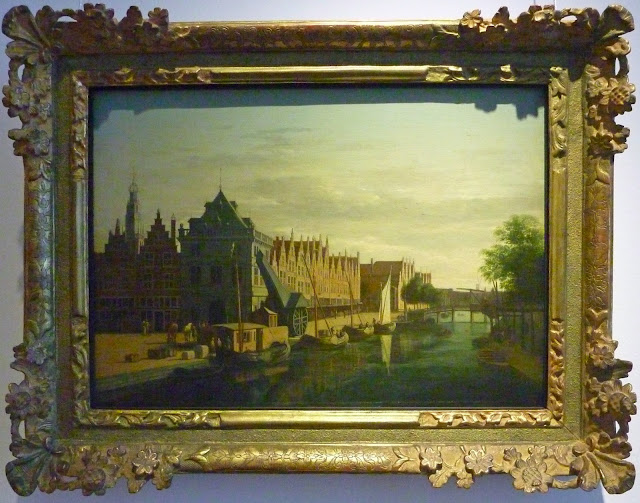 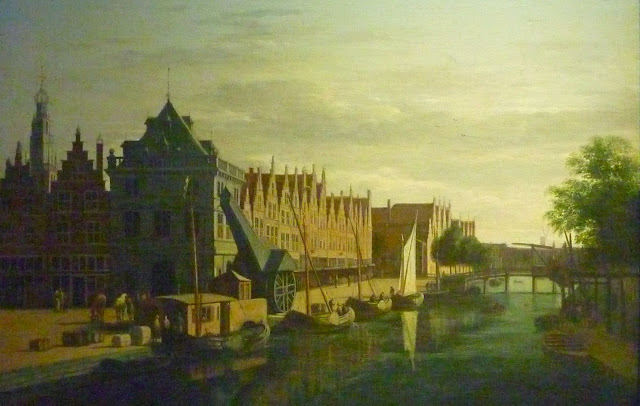 Though not by Frans Hals, one painting caught our attention. It is a scene of the canal bank in central Haarlem, painted by G Breck Heyde in 1670. Its central theme is the De Waag, the Weigh House. There, goods were offloaded from barges, craned in through the front door, weighed for taxation, then moved out the side door and onto wagons or barges. Our skûtsje, Zonder Zorg is currently moored in front of De Waag, almost exactly where the wooden predecessor to our skûtsje in the centre of the painting is moored. 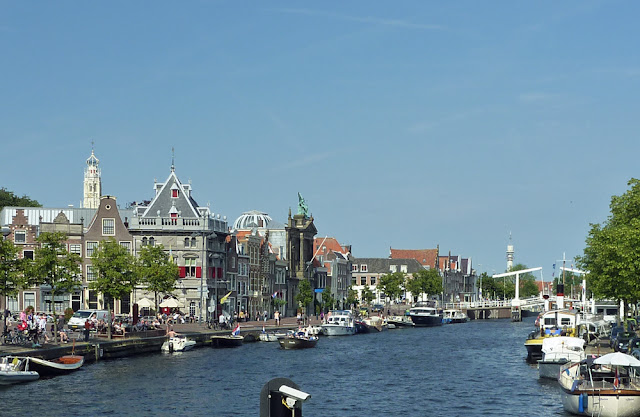 The scene has certainly changed today, with more modern boats along the canal side and some new buildings, such as Teylers Museum with the huge verdigris copper sculpture above its imposing facade. De Waag is still there, though now as a popular tavern. 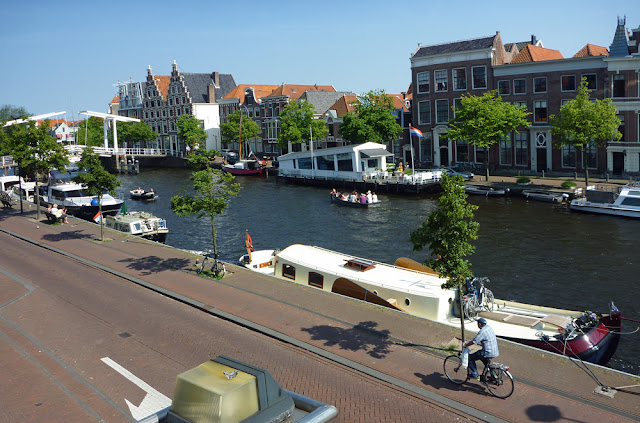 In the early nineteenth century, the upper floor of De Waag became a painters association studio and classroom. In these spaces in the first half of the twentieth century, Edi’s father trained as a portrait painter and was admitted to the Portrait Artist’s Guild. If his ghost were to look out the studio windows today to the Sparne below, it would see Zonder Zorg.

We returned onboard, heads overflowing, but contented.
Posted by Zonder Zorg at 09:37