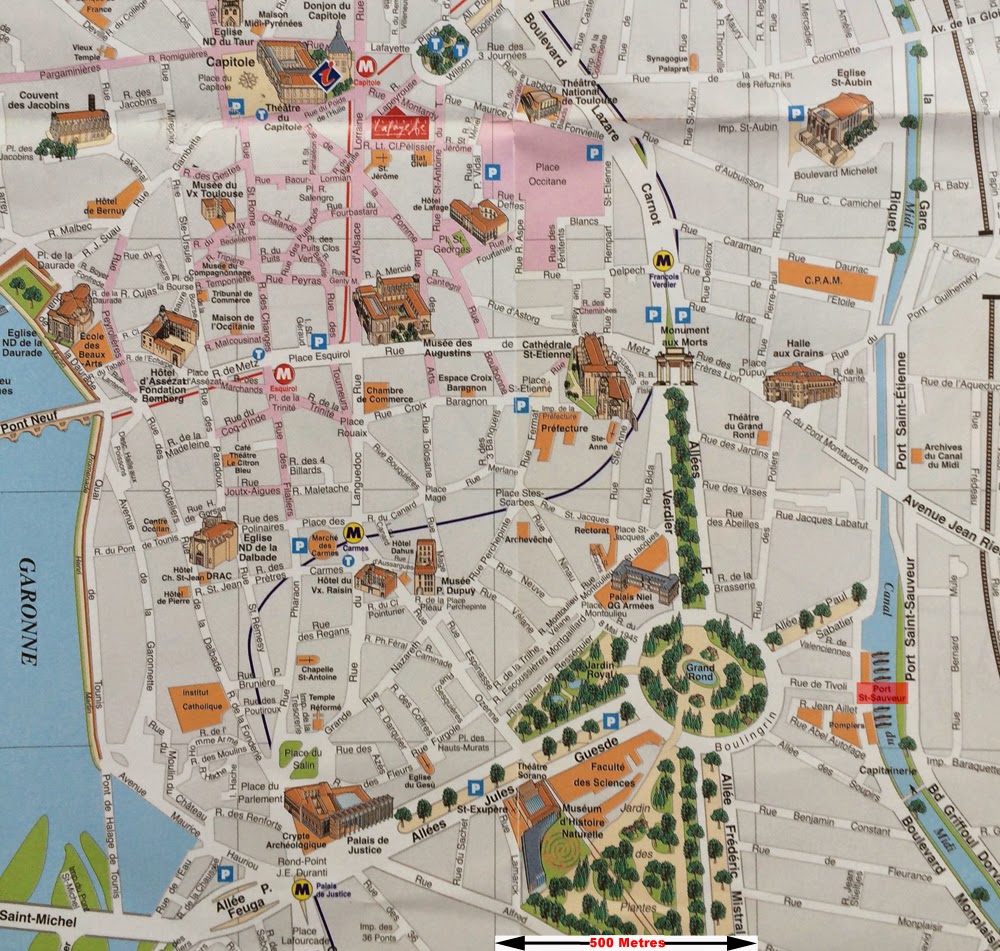 We had arrived in Toulouse on Easter Monday and secured to the end of a float in Port Saint Sauveur. The port is located about 250 metres from le Grand Rond, which leads into Jardin des Plantes and Jardin Royal. To the north and west is the centre of the old city, with its many sights to see and pedestrian malls, squares and streets to wander. Within a hundred metres outside the security gates of the marina are a boucherie and a boulangerie, plus two small supermarkets. 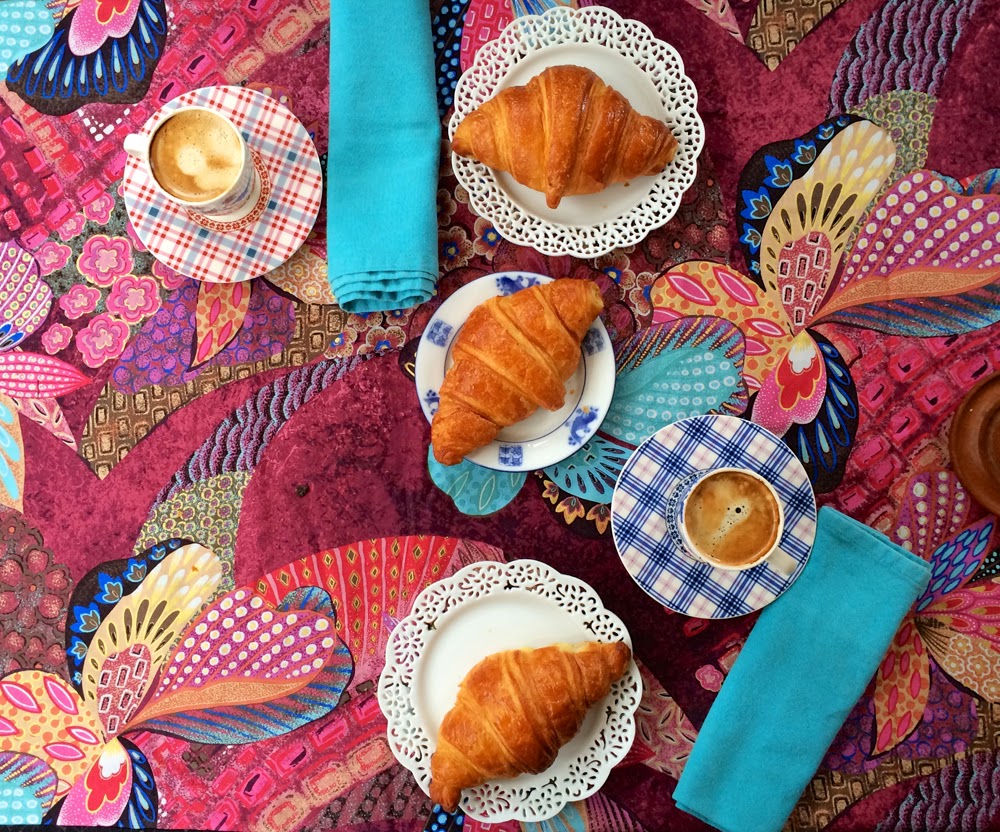 On Tuesday morning I dodged the raindrops as I dashed across to the boulangerie for fresh croissants for breakfast. In the late morning, seeing no letup in the rain, we took our umbrellas and went walking through the winding streets and lanes of the old city. 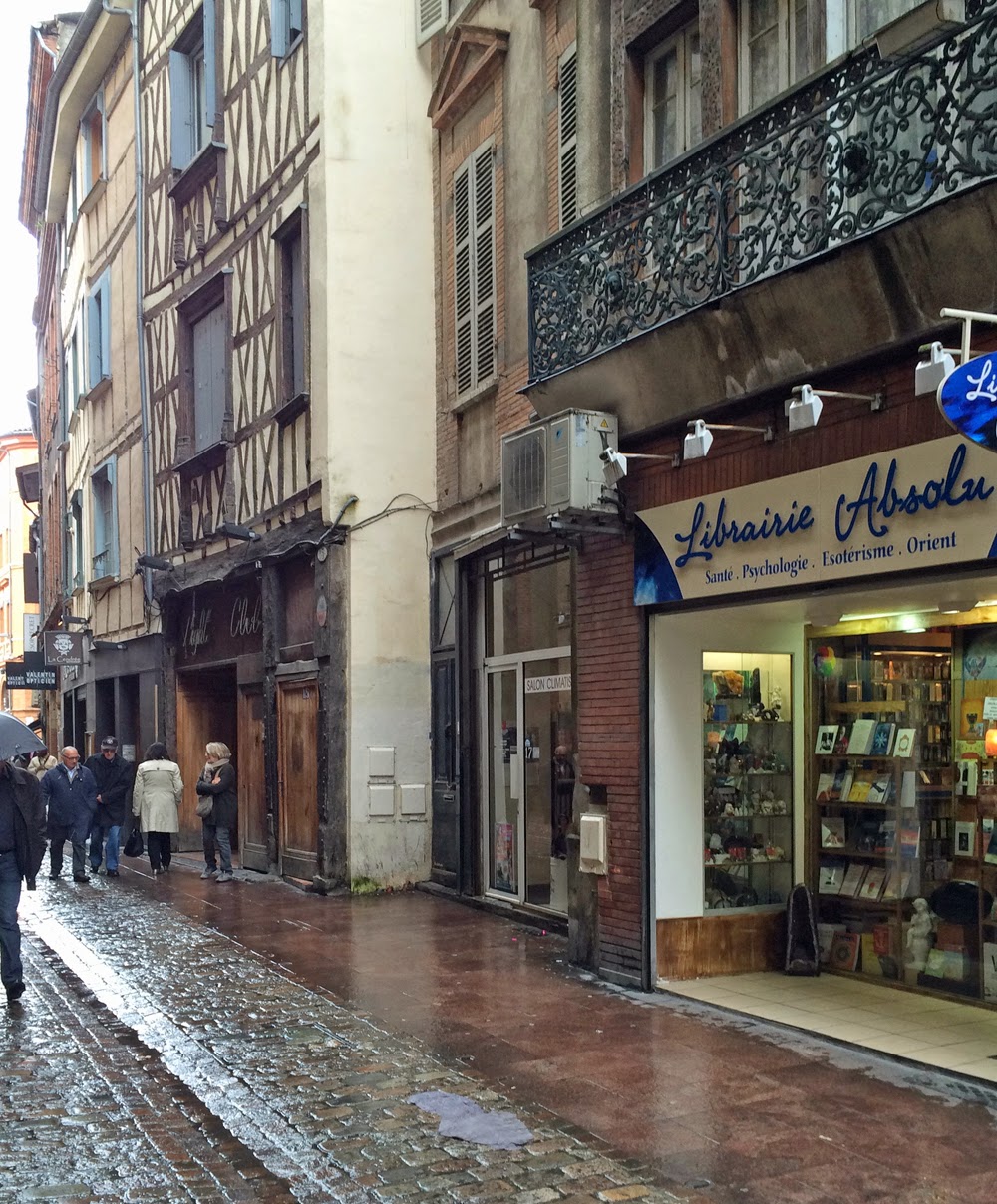 Among the things we were looking for was a chart book for le canal de Garonne and the waterways connected to it. We were within five kilometres of the end of our charts and we didn’t want to fall over the edge without navigational and services information for the continuation of our route. Our preference is the Éditions du Breil series and we needed Volume 12 - Aquitaine and Volume 18 - Estuaire de la Gironde. The capitainerie was out of stock of both these, nor did they have any for the areas from the other guide publishers. Mme la Capitaine knew of no booksellers that would have any. I punched “librairie” into the maps app on my iPhone and off we went. 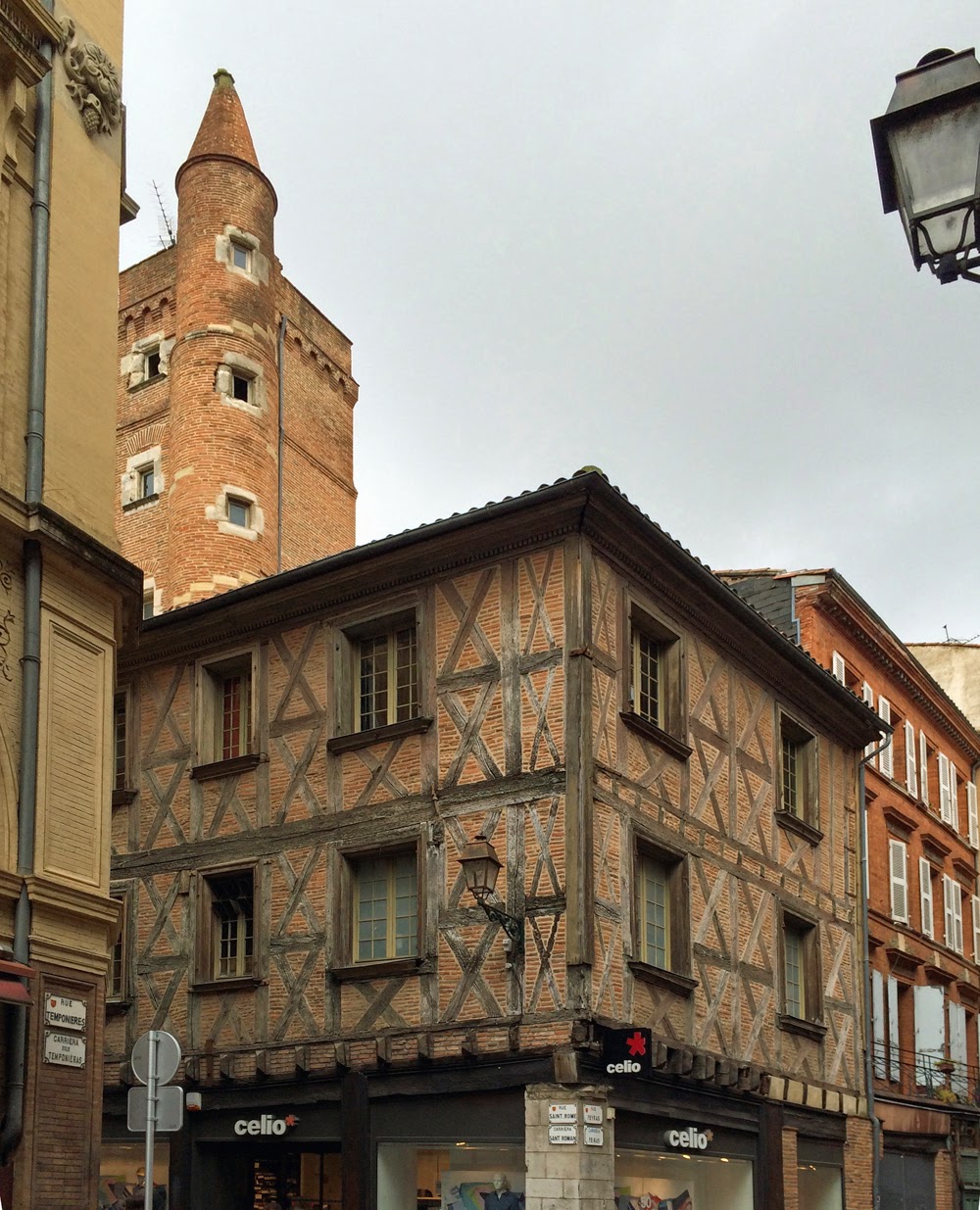 We had no luck finding the guides at any of the book stores we visited, nor could any of the staff offer any suggestions of who might have some. We did see many wonderful old buildings along the maze of narrow, winding streets and alleys. 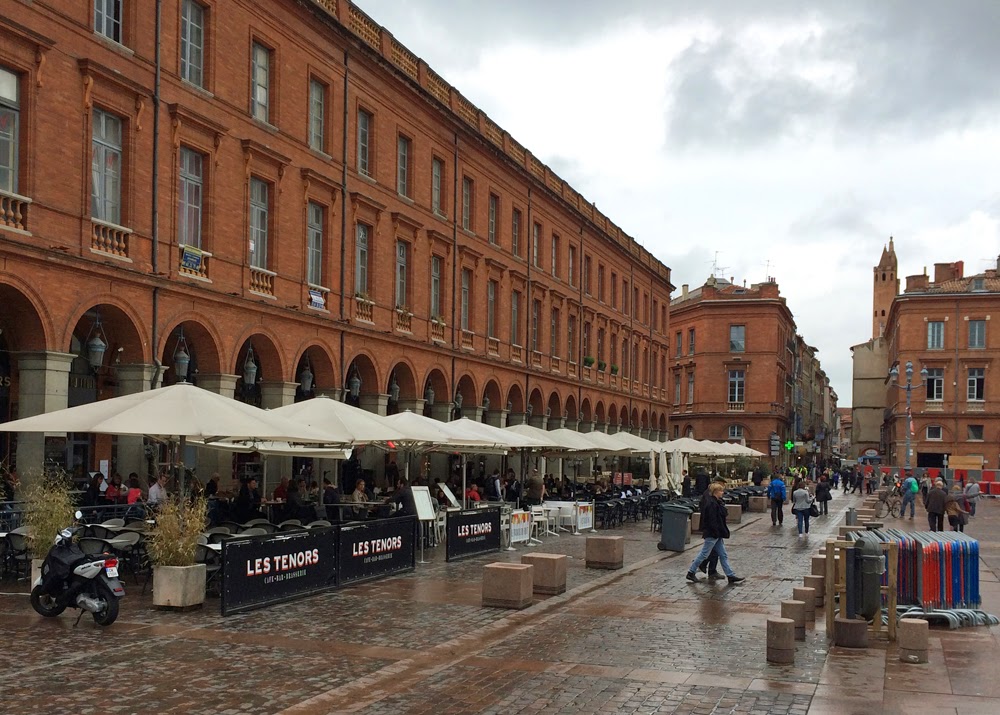 By the time we reached Place du Capitole, the produce vendors were packing-up their stalls in the market and lunch patrons were finding tables under the umbrellas on the patios of the bistros and restaurants lining the periphery of the square. 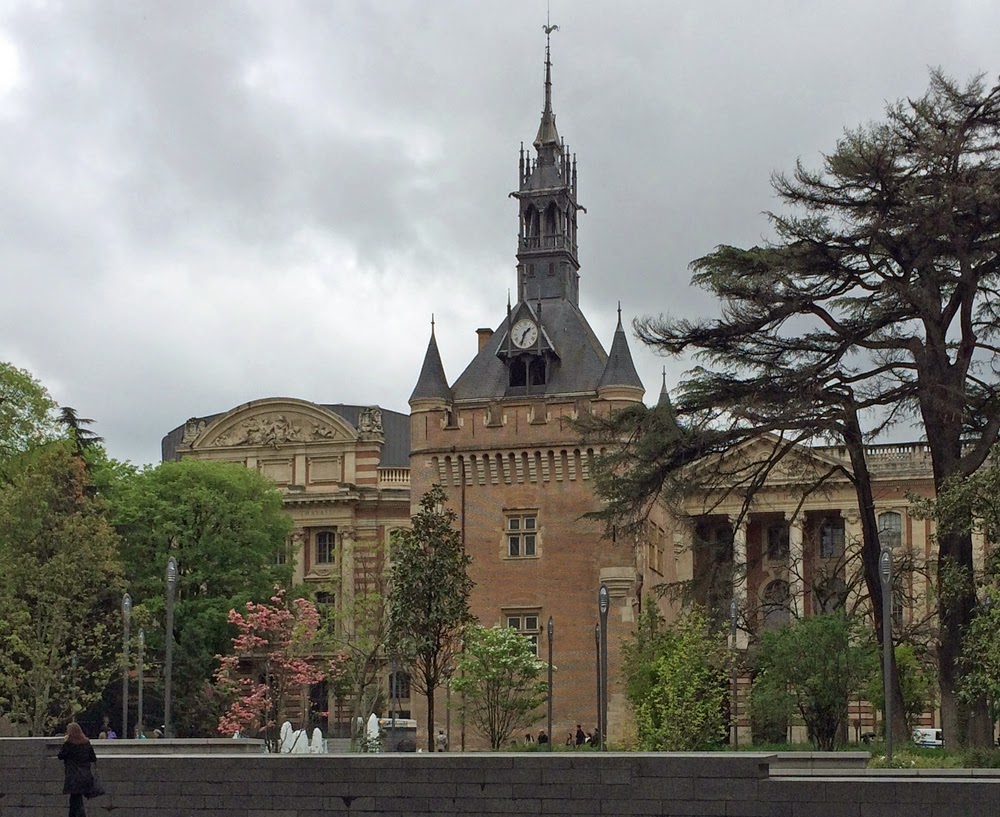 We continued north to Place Jeanne d’Arc where we had been told there was a shop selling computer supplies. After four years of very hard service, the cable between my iPad and its charger had finally failed. We found a replacement cable and then wound our way through the old streets back to Zonder Zorg, pausing in the mid-town Géant Casino supermarket for fresh supplies.

After breakfast on Wednesday we took advantage of the break from the rain, hopped on our bicycles and continued our explorations of Toulouse. Our first stop was at Musée des Augustins, which is housed in a former monastery built during the fourteenth and fifteenth centuries. It was confiscated by the state during the Revolution and in 1793 it was converted into a museum. 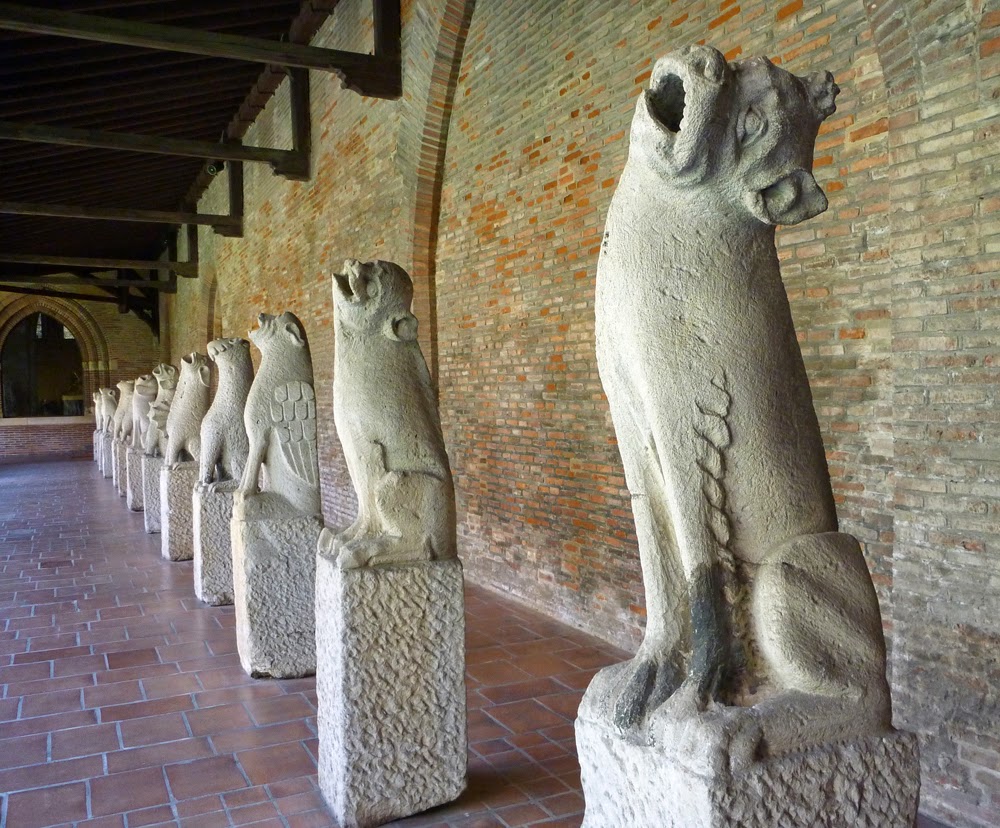 Among its collections are thirteenth and fourteenth century church gargoyles, many of which are lined up on display in one of the courtyard ambulatories. 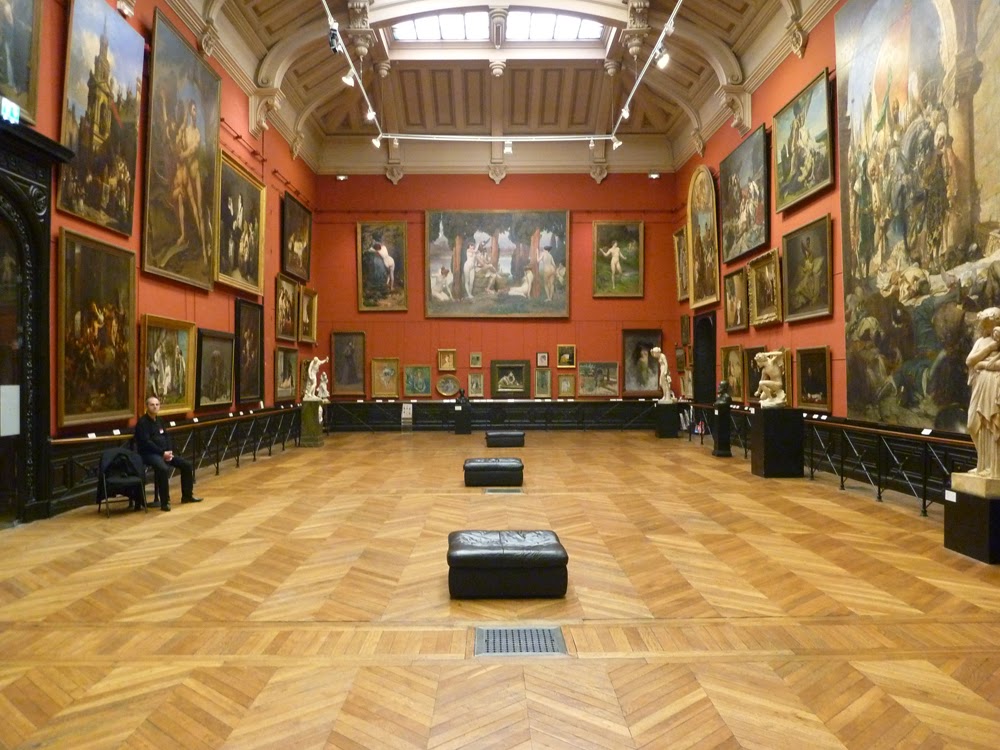 Leading up a grand staircase is a collection of sculptures, and at the top, there are three large rooms of paintings with French, Italian and Dutch masters. Many of the paintings on display are vary large, some monumental, and the room seems too small for some of them. 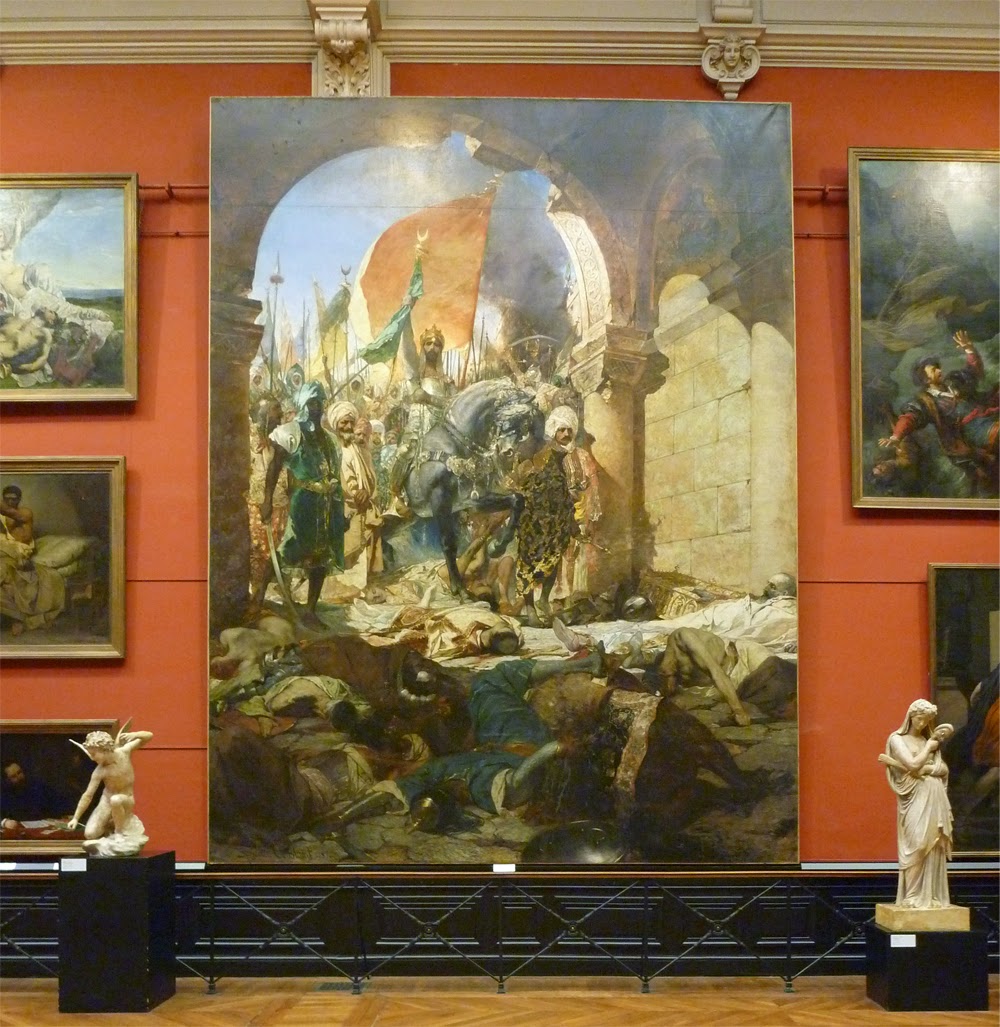 Benjamin-Constant’s 1876 depiction of The Entry of Sultan Mehmet II into Constantinople in May 1453 is one that would enjoy a larger room. 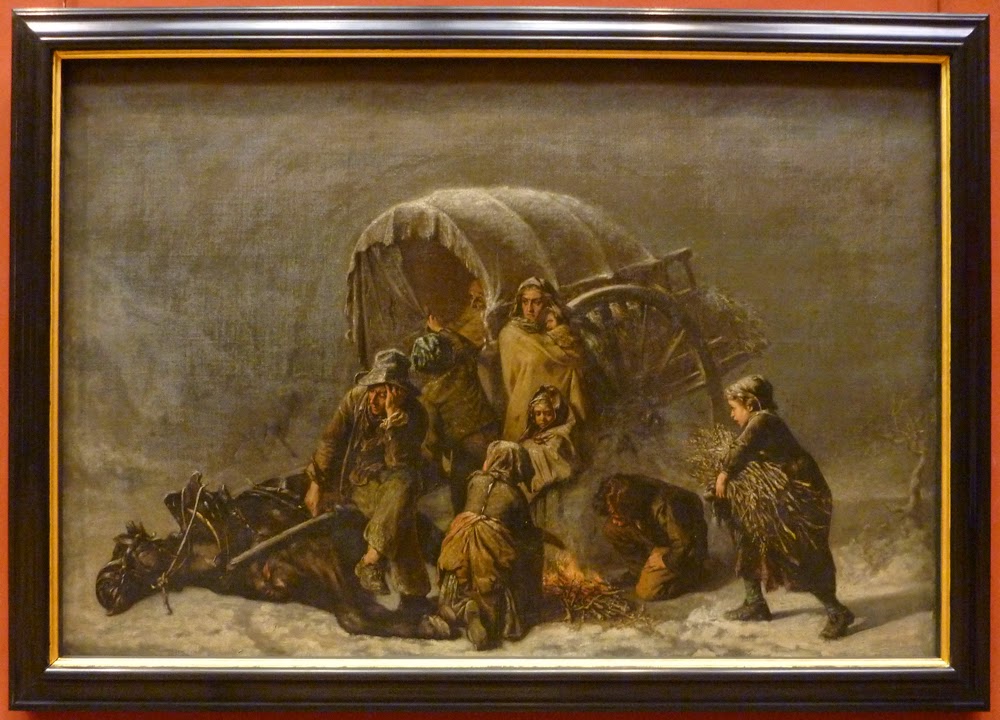 I was delighted to see among the paintings Alexandre Antigna’s 1855 La Halte forcée, The Forced Halt. It brought back fond memories of my art classes in the late 1950s and early 60s when we studied it as an example of composition and emotion. 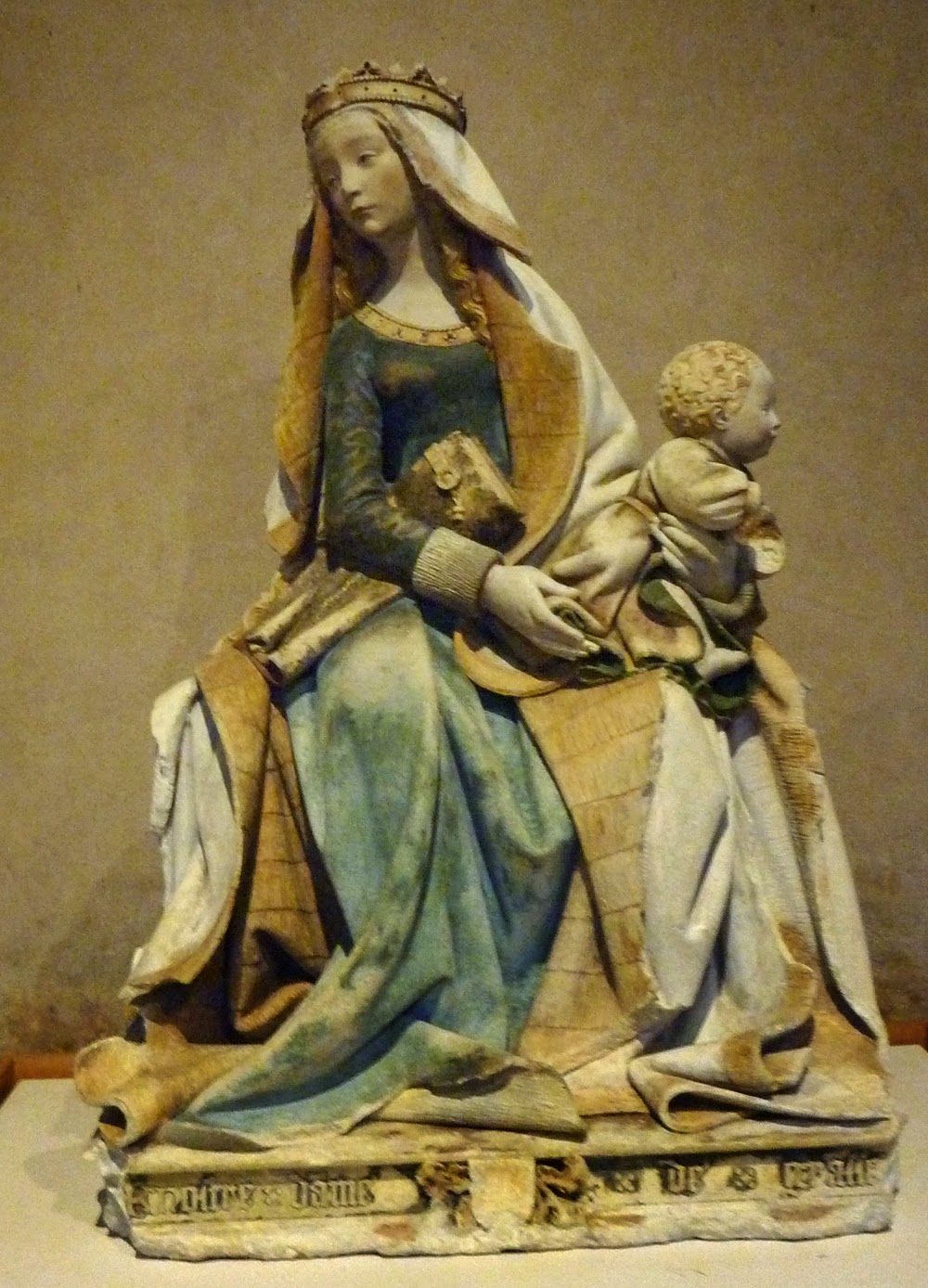 The museum has a collection of Romanesque sculpture, which is classed as one of the richest in the world. Unfortunately, the huge display room was under renovation and was temporarily closed. We continued on to the displays of Gothic sculptures. Among the finer pieces is Nostre Dame de Grasse, a recently restored polychrome limestone carving from the fifteenth century. 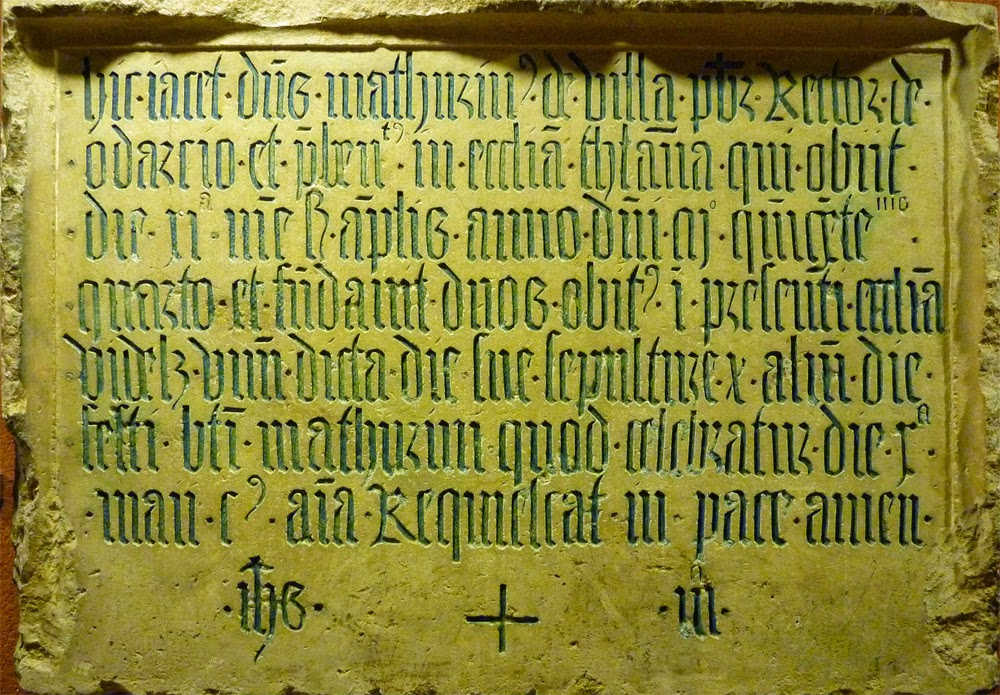 There is a wonderful collection of carved epitaphs, this one with beautifully calligraphy from 1504. 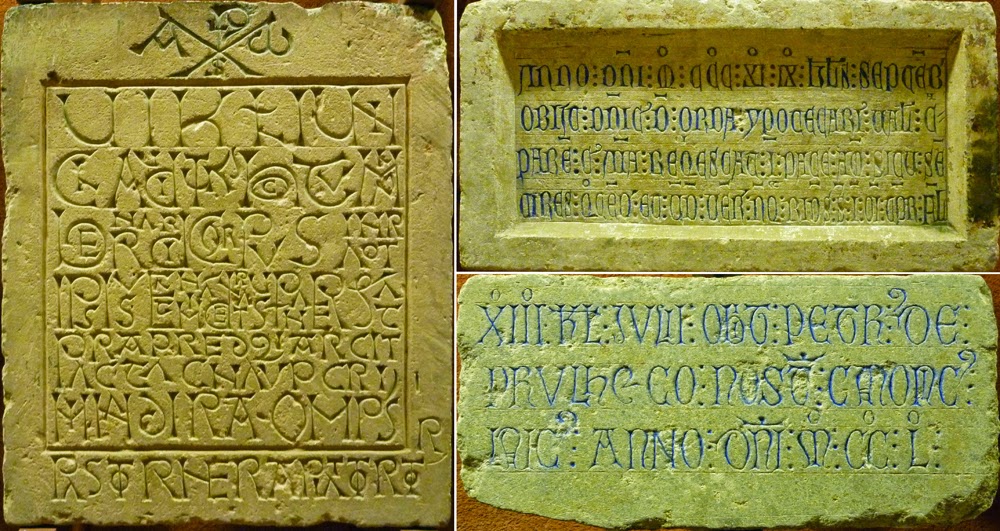 There were about eighty pieces of the collection on display, dating back to the eleventh century. These took Edi back to her graphic arts studies and to her sign painting days, and me back to my days studying and teaching calligraphy. 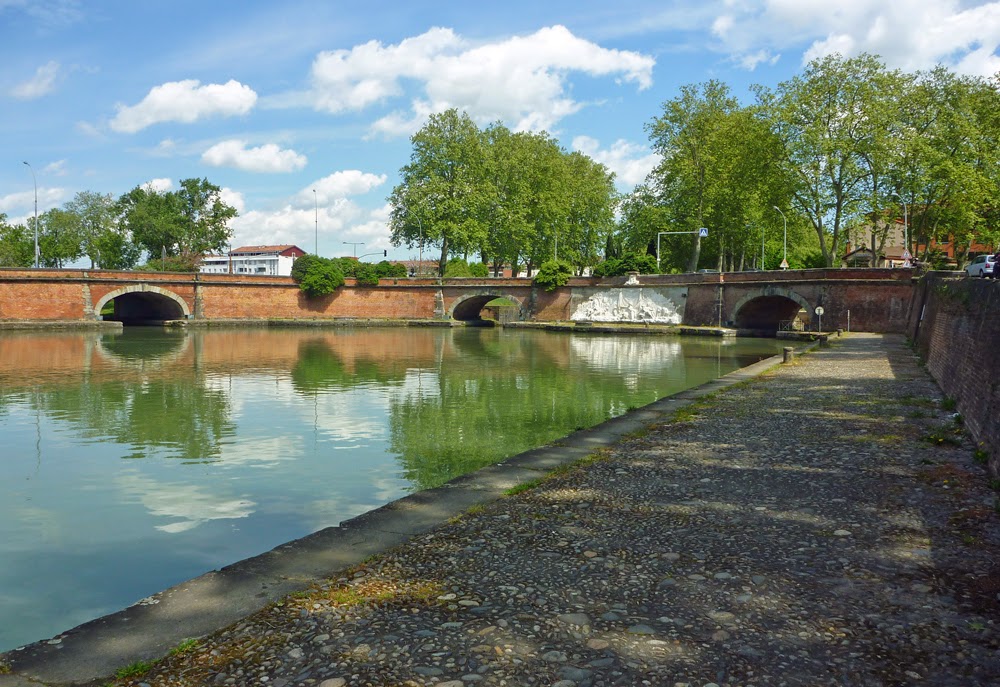 From the museum we pedaled across to the banks of La Garonne and followed the river northward to the beginning of Le canal de Brienne. This short canal leads fifteen hundred metres from La Garonne upstream of a weir to the end of Canal du Midi. We followed the canal to les Ponts Jumeaux, the Twin Bridges at the junction. Here a small basin called l’Embouchoure led through a lock down to La Garonne below the weir. With the construction of Le canal de Garonne, a third bridge was added in 1843 giving access to the new canal. The lock to La Garonne downstream of the weir was later closed. 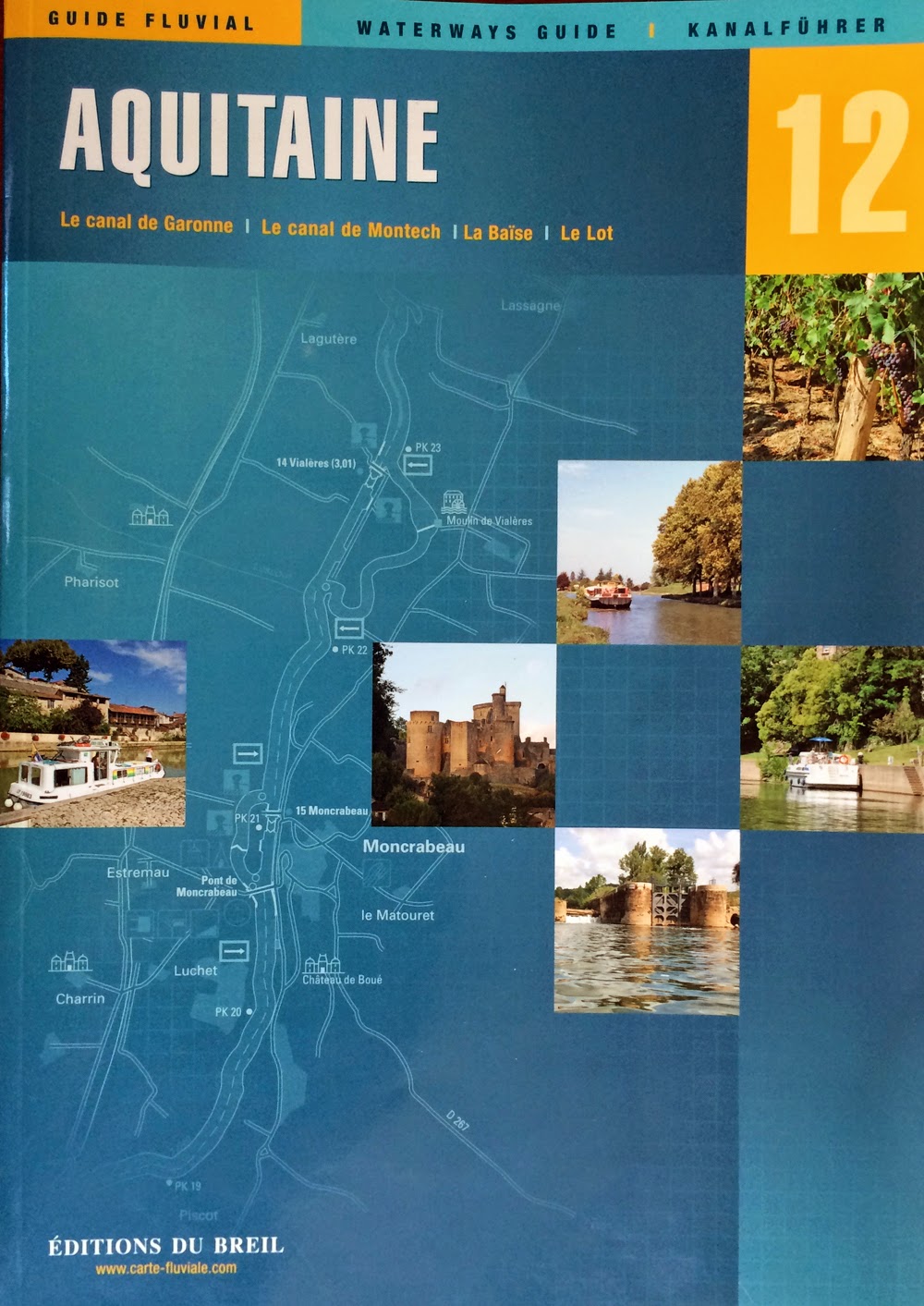 We pedaled the five kilometres back to Zonder Zorg for lunch, and once reenergized, I hopped on my bike and chased off in search of the elusive canal guides. Finally, at Librairie Ombres Blanches in rue Gambetta, I found a copy of Guide Fluvial for Aquitaine. This has charts and directions for Le canal de Garonne, Le canal de Montech, La Baise and Le Lot. This will take us down to the beginning of the tidal Garonne, where we will need the guide for Estuaire de la Gironde. We have many weeks and many cities, towns and villages to search before we need it.
Posted by Zonder Zorg at 10:27