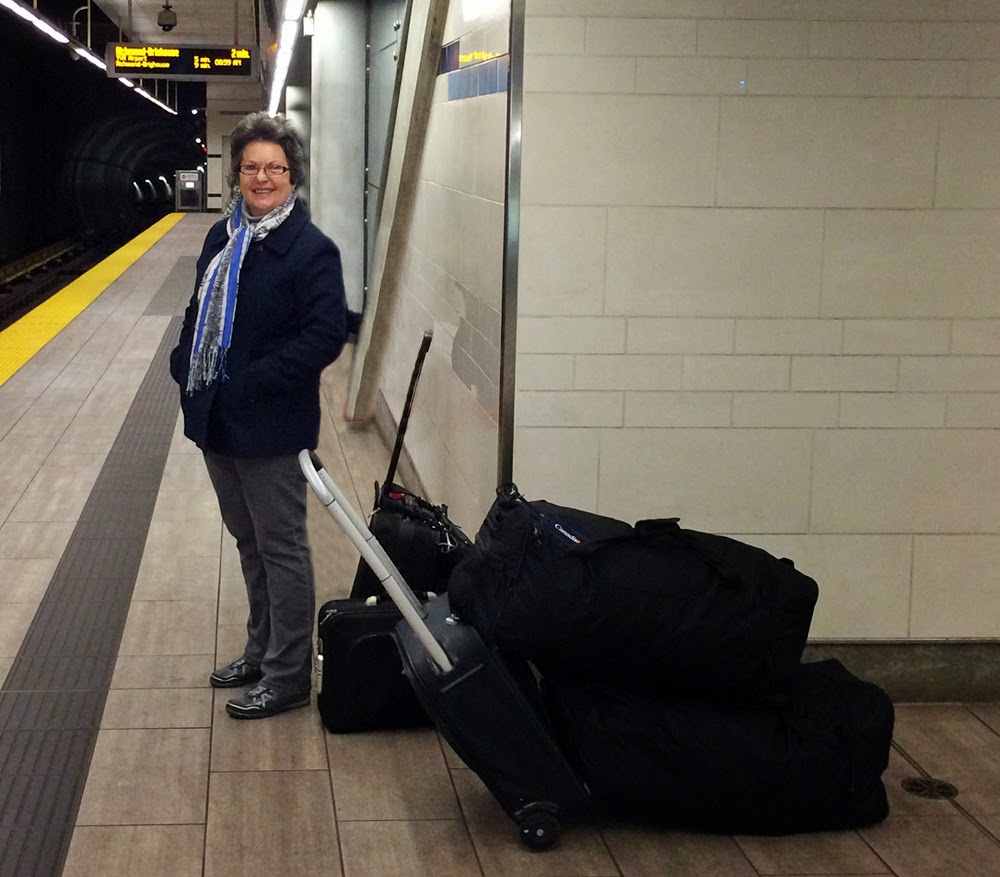 On Monday 10 March we rolled our luggage train to the SkyTrain station to begin our commute from Vancouver back to Zonder Zorg in Carcassonne. We had seats on a flight from Vancouver to Toronto with a connection to Paris and we had a rental car reserved for a week. Everything went smoothly and shortly after 1100 on Tuesday morning we were on the ring-road around Paris and heading toward the Midi. 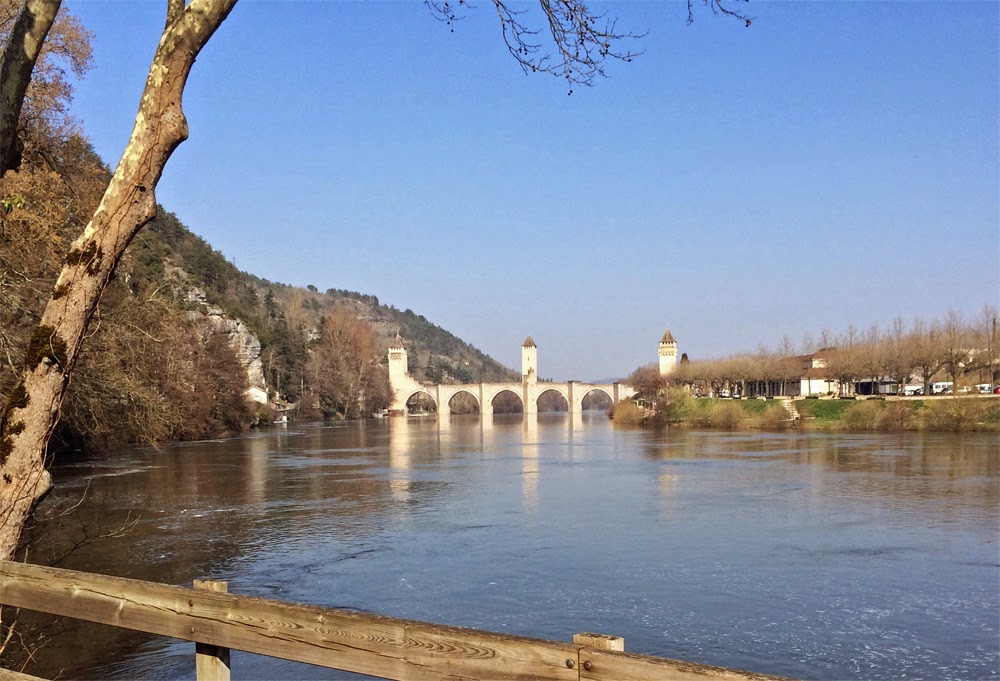 In the early afternoon we paused at an autoroute rest stop for a baguette and cheese and a two hour nap to help stave-off the nine hour jet lag. Mid-evening, after about 800 kilometres of driving, we stopped in Brive-la-Gaillarde for the night. On Wednesday we decided to take the small roads, rather than the autoroute and had a delightfully winding drive through the Périgord and upper Dordogne, with pauses in Lauzerte and Cahors. 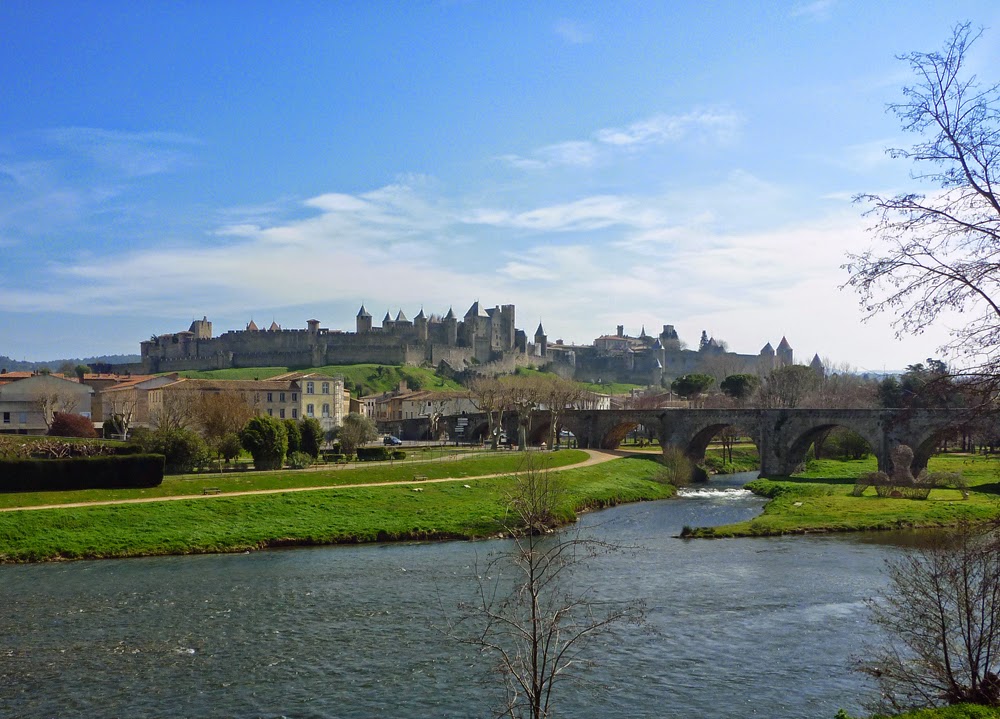 Shortly before 1700 we arrived aboard Zonder Zorg in Carcassonne. The weather covers that Edi had sewn together had stood-up to the winds of the winter. They had done their job well protecting the decorative woodwork and keeping the interior fresh. The cover over the skylight had allowed us to lock one side open a small crack, and with the portlight in the shower slightly ajar and adding cross-ventilation, the interior had remained wonderfully fresh. 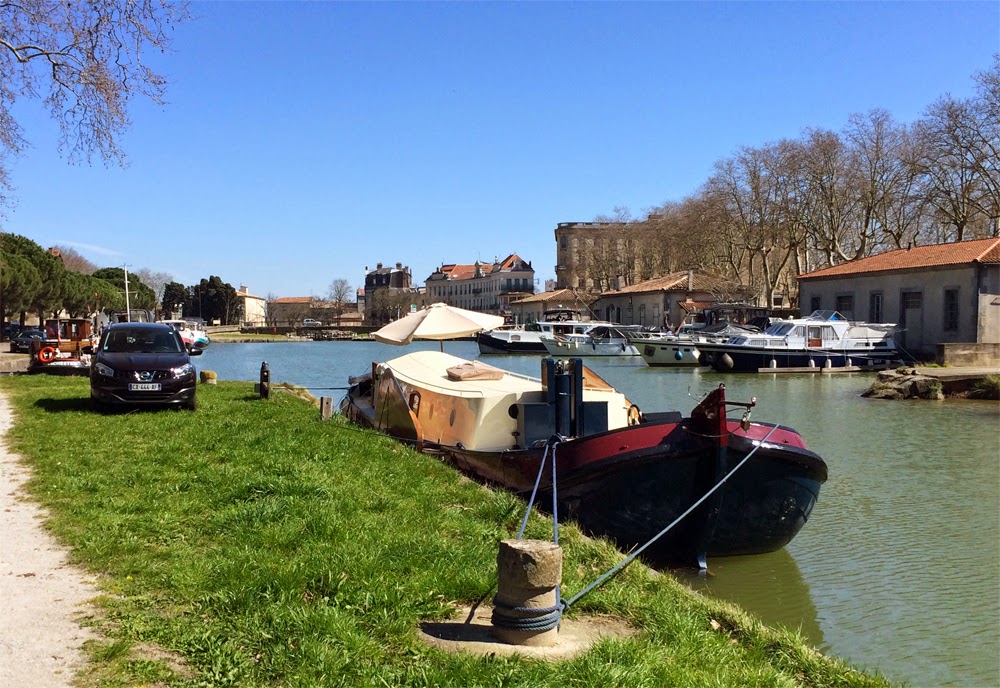 I filled the water tanks, purged the water lines, purged and charged the hot water tank, reconnected the gaz bottle and we were comfortably back aboard. After a quick trip to the supermarket for supplies for dinner and breakfast, we had mid-evening dinner and fell into bed to continue adjusting to the nine-hour time change. For the next few days we made full use of the rental car to chase around the stores picking-up obscure and bulky items that would be difficult to source or to transport later by bicycle. 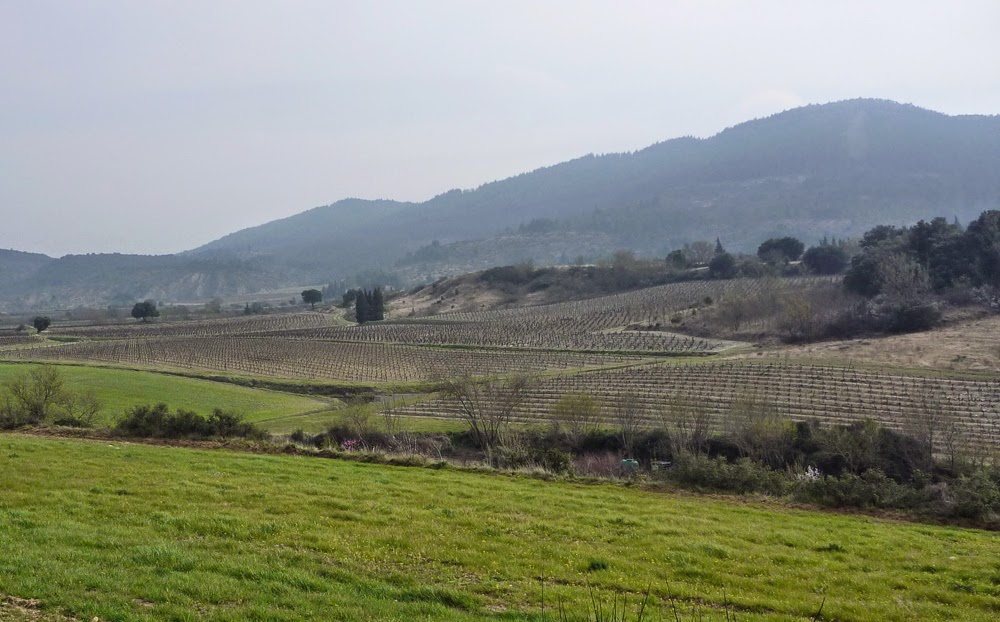 On Saturday our shopping took us into the wine country to replenish Zonder Zorg’s cellars. Carcassonne is adjacent to three famous wine regions, Limoux, Corbières and Minervois. We began with Limoux, where the basic sparkling wine process appears to have been invented. By 1531 the monks at the abbey of St.-Hilaire, a few kilometres southeast of Carcassonne, were making a bottle-fermented sparkling wine. By the early 1660s the British were deliberately adding sugar to induce a secondary fermentation to add sparkle to bottled wine. Among these revivified wines were those they had imported from the Champagne region. By the late 1690s, because of the popularity of the fashion in England, the wine producers in the Champagne had begun using the process themselves to make the predecessor of what we now know as Champagne. Dom Perignon, who is famously reputed and ceaselessly marked in the Champagne region as having invented Champagne, had nothing to do with the process of adding bubbles. In Limoux we visited wineries and tasted many wines, but left the region empty-handed; nothing had excited us. 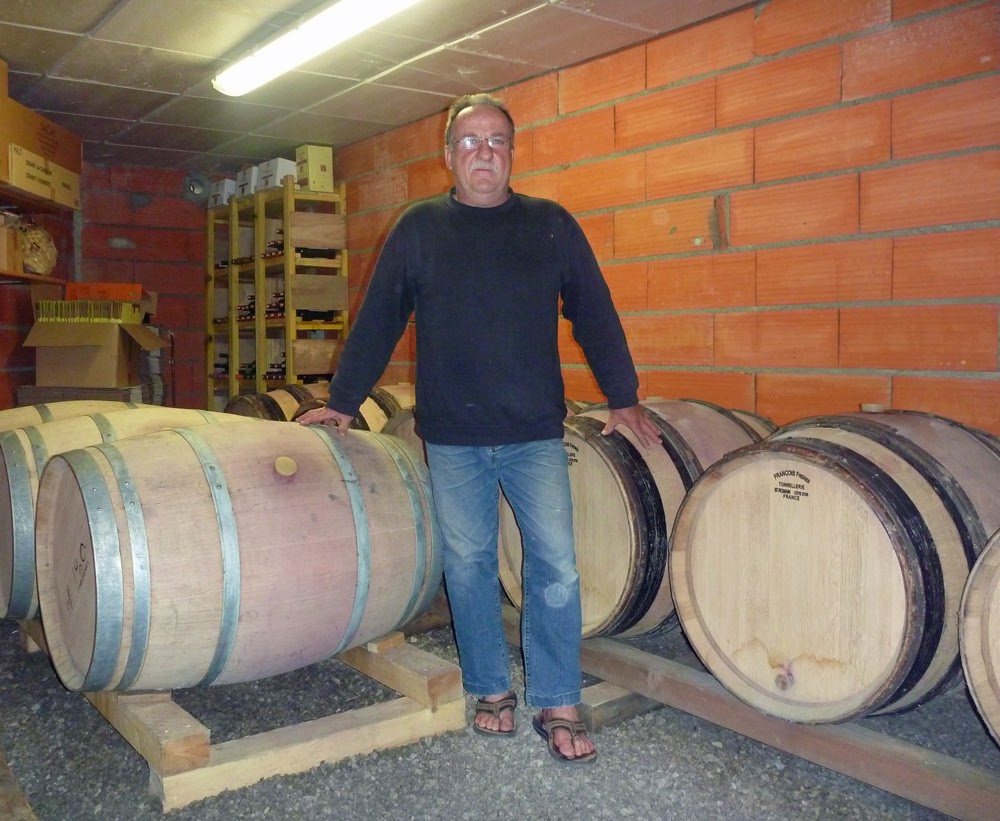 We continued along eastward into Corbières, pausing at small producers along the way to taste. Finally, in the village of Monze we found some wines we liked. Domaine La Luze was established about a decade ago by Christian and Thérèse Caverivière to exploit the vineyards that Christian’s father and grandfather had worked for many decades. The harvests had previously all been sold to the local Cave Coopérative, but Christian wanted more quality control, so once he had taken over the family vineyards, he built a small, very modern winery.

The vineyards total seven hectares and are planted to Grenache Noir, Syrah, Carignan, Cinsault, Grenache Gris, Viognier and Marsanne. To ferment and condition these grapes, Christian has installed a range of temperature-controlled stainless steel fermenters in sizes that allow him to keep small lots separate. He makes a white, two rosés and four reds. The reds, which are all AOP Corbières, were of most interest to us. 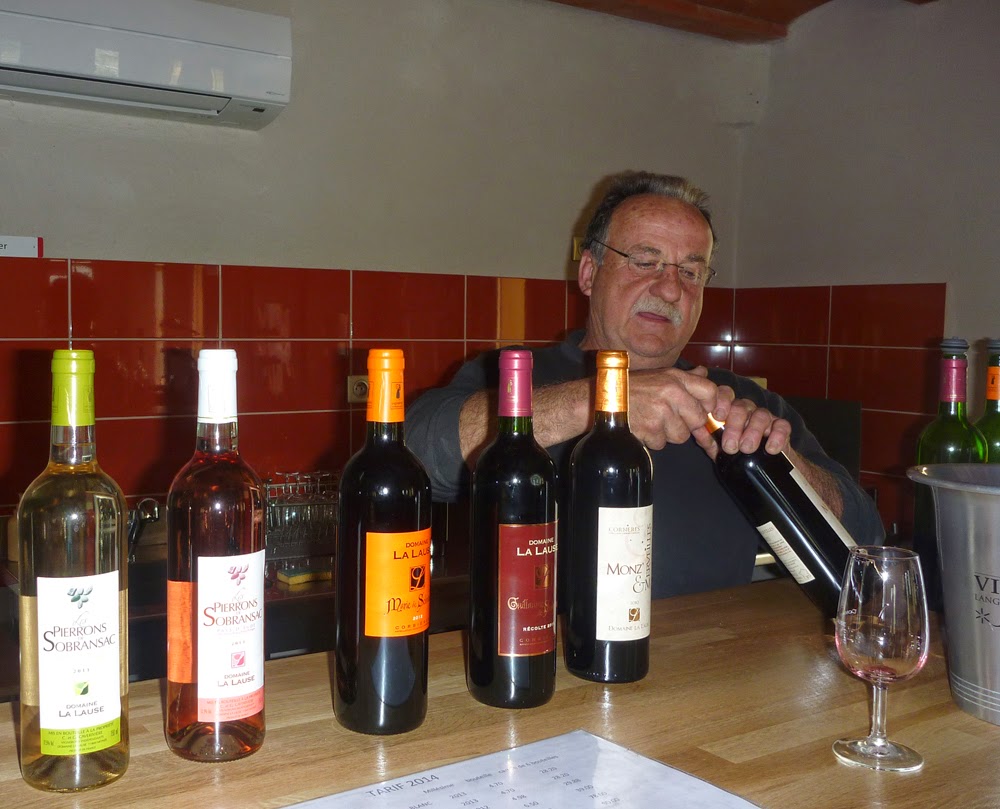 The first of the reds is made from younger vines and lesser plots and is packaged in five litre containers and we passed on it, but the other three reds all impressed us. The 2011 Marie de Sobransac is made with a blend of Syrah, Grenache Gris and Carignan and offers a delightful mouthful of fresh red fruit with a pleasant tannic edge and a long finish. The 2010 Guillaume de Sobransac comes from a blend of Syrah and Grenache Noir and is aged in small oak. It has a firm structure with overtones of vanilla and chocolate layered on complex dark fruit flavours that carry into the long finish.

The 2010 Monz’ & Merveilles is also made from Syrah and Grenache Noir and it is aged for twelve months in small oak, about twenty-five percent new. On the nose it shows aromas of coffee and plum jam and these persist into the palate, combining with intense cassis flavours. The power of the fruit is well supported by strong, persistent and well-integrated tannins, which should allow the wine to evolve finely over a decade or more. To show the maturation style of the Monz’ & Merveilles, Christian opened a bottle of the 2008 for us to taste. We were immediately hit by aromas of cassis syrup. The tannins were resolving wonderfully and the intensity of the fruit was almost overpowering. Delighted with the wines, we bought three cases, and to thank us, Christian threw in a bottle of the 2008 Monz’ & Merveilles. 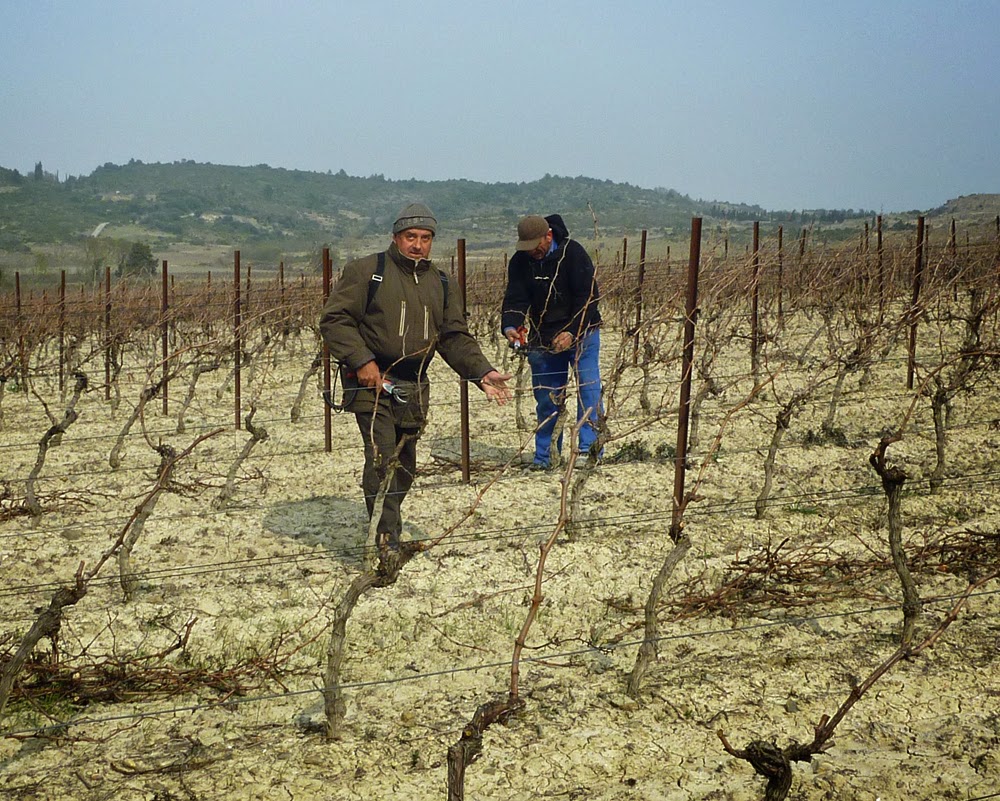 Domaine La Luze is midway between Carcassonne and Lagrasse, so after we had loaded our wines into the car, we continued along toward Lagrasse looking for more wines. Many of the vineyards had completed pruning, but along the way we saw several where it was still ongoing. While the temperature was warm, in the upper teens, the wind was very strong and the workers were bundled-up against it. 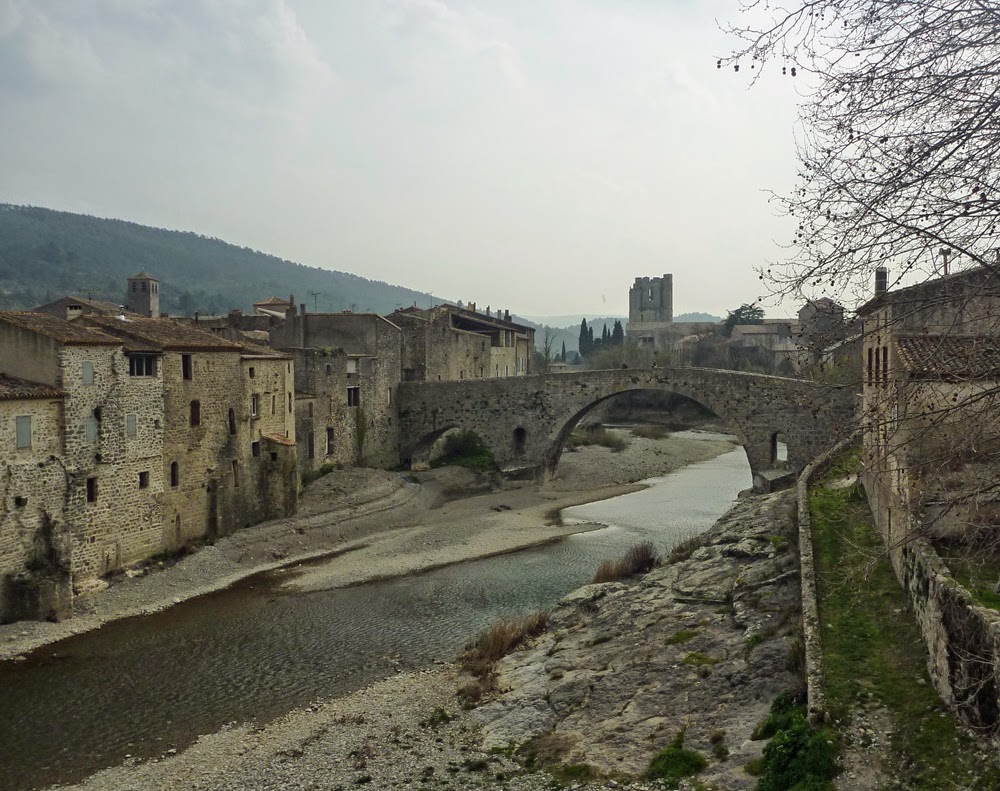 We found no more wine, but in Lagrasse we found some splendid scenery in the medieval abbey town. 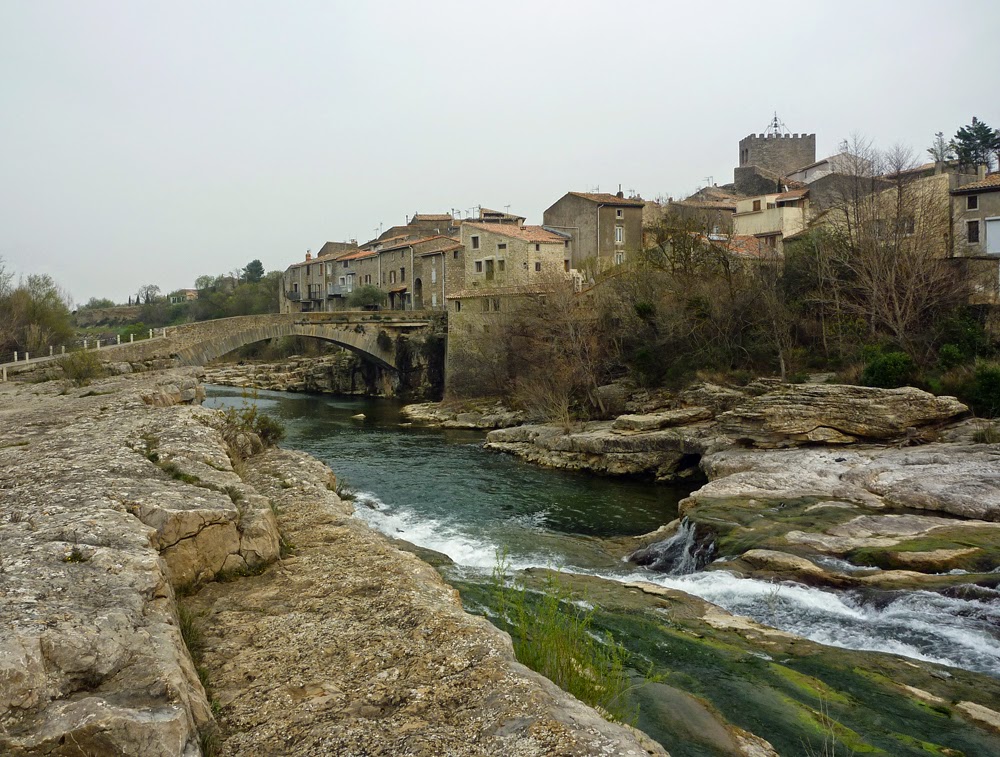 From Lagrasse we took a narrow and very winding track through hilly country that is cut by spectacular gorges and dotted with delightful little medieval villages. We finally found our way out of the wilds and back into Carcassonne. 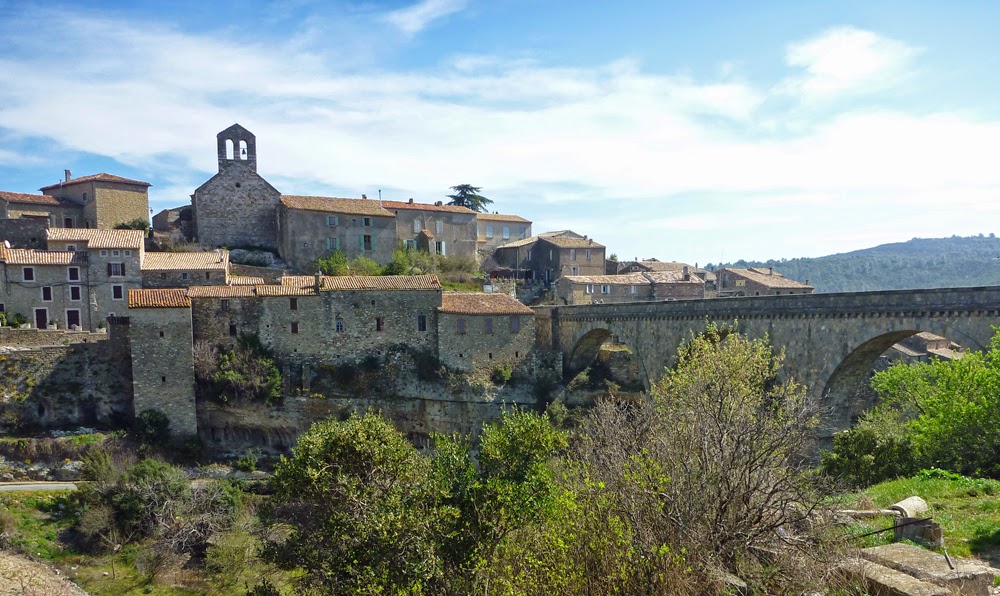 On Sunday we drove off into the Minervois looking for wine. Although we found no further wines of interest, we did see some beautiful settings in the hills along the base of les Montaignes Noirs. 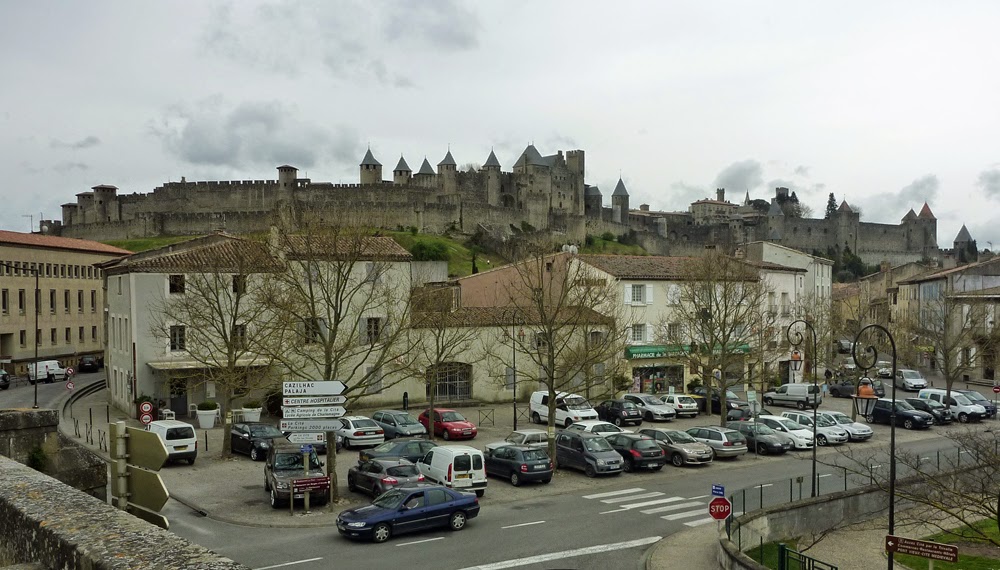 Back in Carcassonne, we took a walk through Ville Basse up to the fortified La Cité, which was inhabited by the Romans in the first century BC. Ville Basse, the Lower Town, which is also referred to as the New Town, since it dates to only 1247, was destroyed by the Black Prince in 1355 and then quickly reconstructed and fortified by the residents. We walked across the Vieux Pont, which had been built in the early thirteenth century to replace an older wooden bridge and give access between La Cité and Ville Basse. 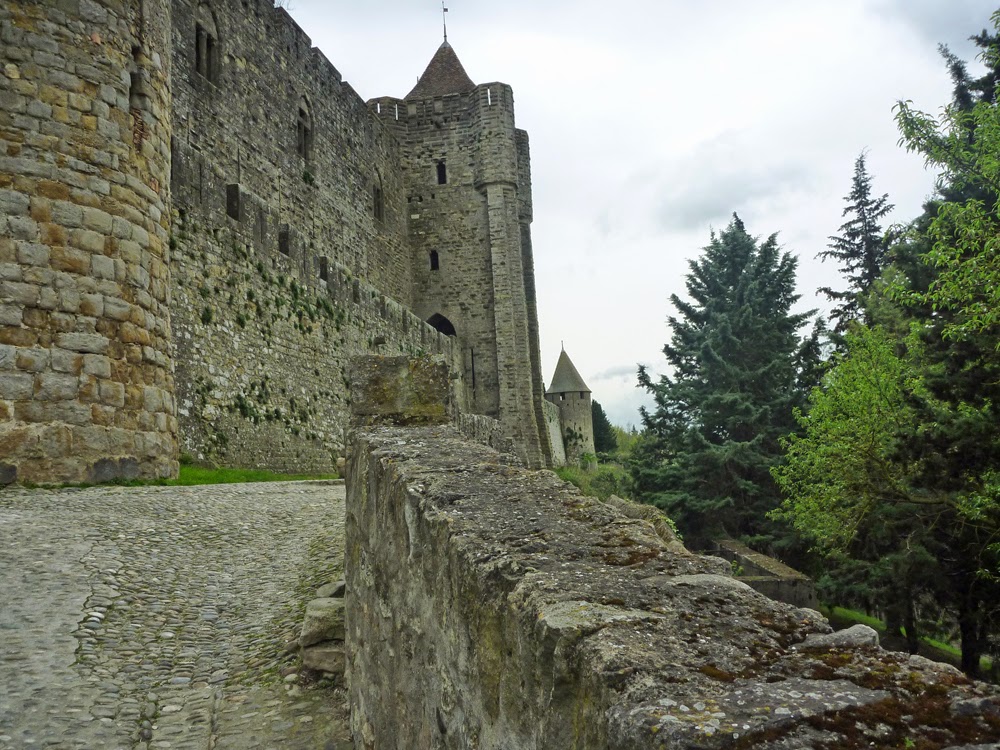 We followed the roads to Place St-Gimer and the footpath that led up from there across the west slopes to Porte d’Aude. 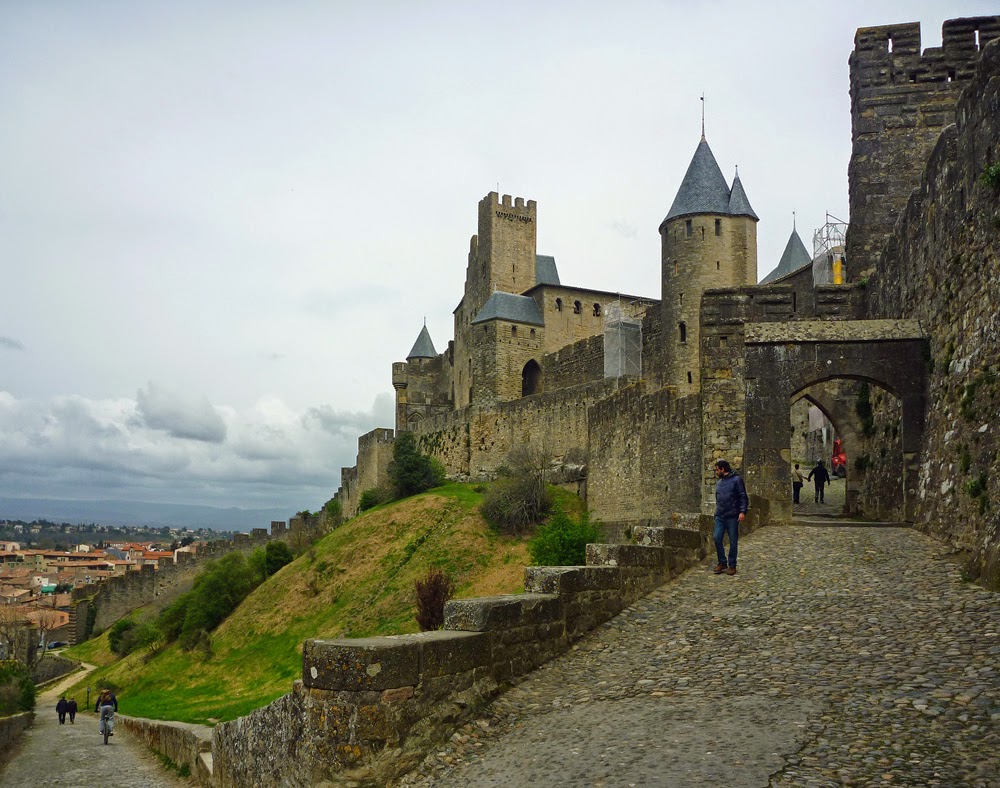 Back across the slopes, the view of the western ramparts and le Château Comtal was impressive. The hill has been fortified for at least two millennia, starting with the Romans, though possibly by others earlier. 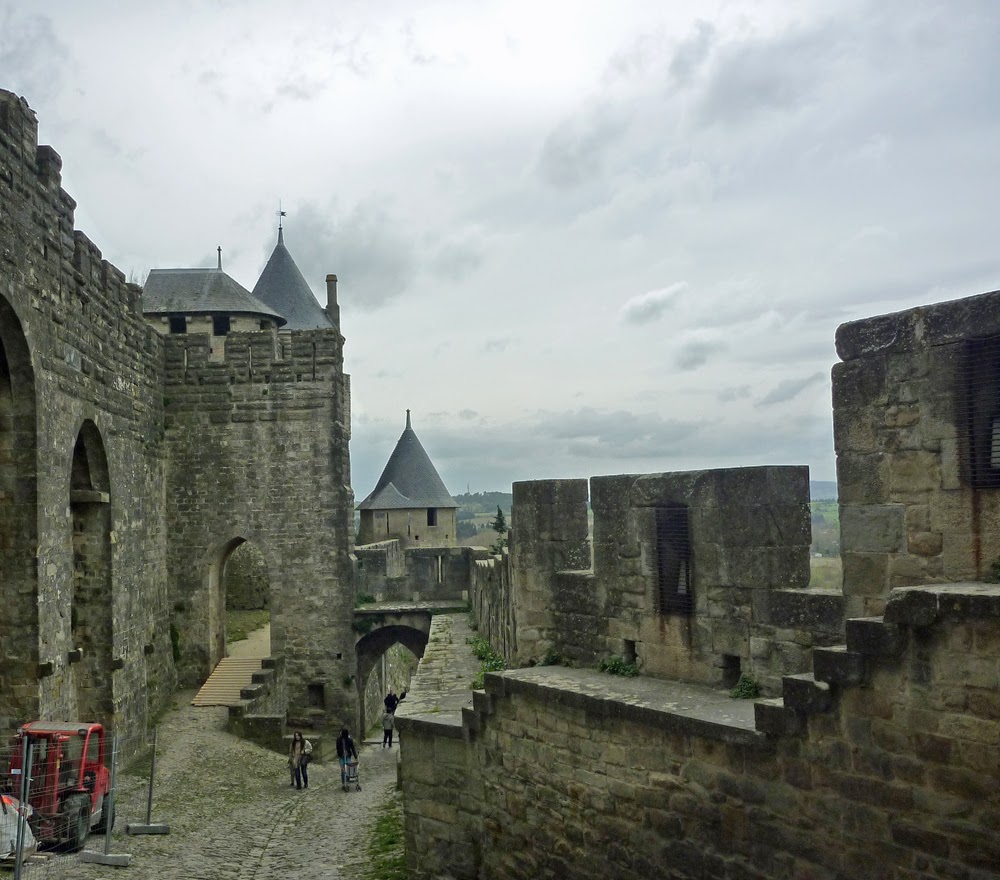 The fortifications include a three-kilometre-long double wall with fifty-two towers. In 1849, because of their deteriorated state, the French government decided that the fortifications should be demolished. The locals strongly opposed this and a campaign was launched to preserve the fortress as an historical monument. Because of the pressure, the government reversed its decision, and in 1853 a restoration of La Cité was begun, led by architect Eugene Viollet-le-Duc. He continued until his death in 1879 and the work was largely completed by the end of the nineteenth century. 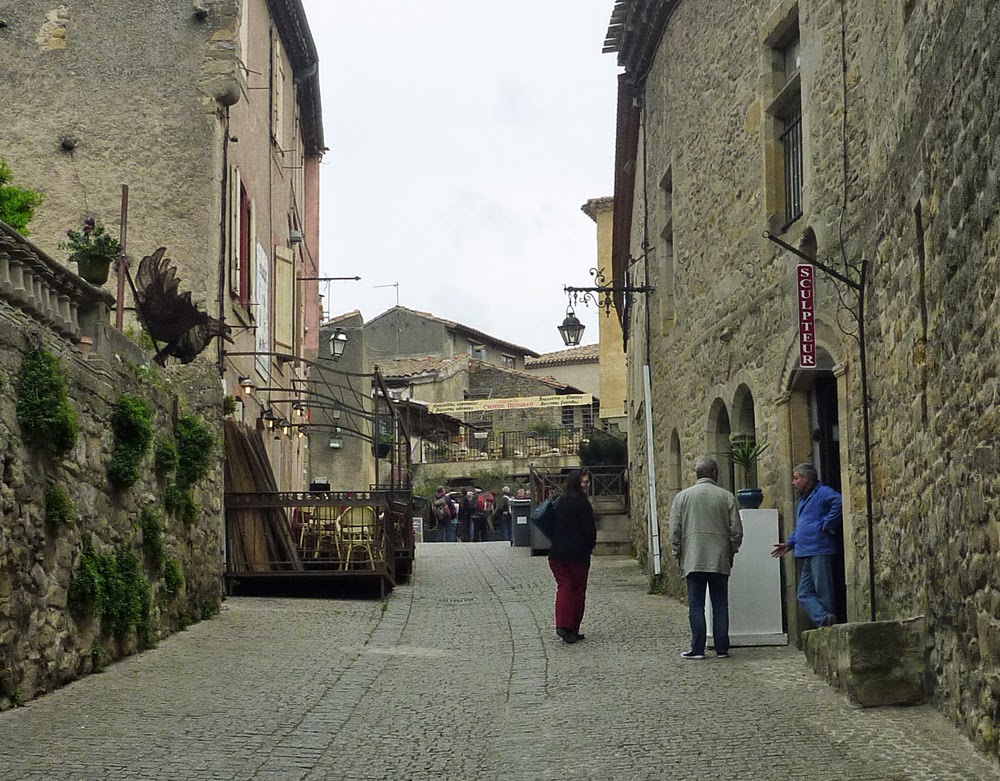 Viollet-le-Duc was known for interpretive restorations, adding creative fantasy to historical fact. He had added a third tower to Notre Dame de Paris, and with La Cité, he added pointed roofs to the wall towers in a style typical of northern France, but unusual in the south. 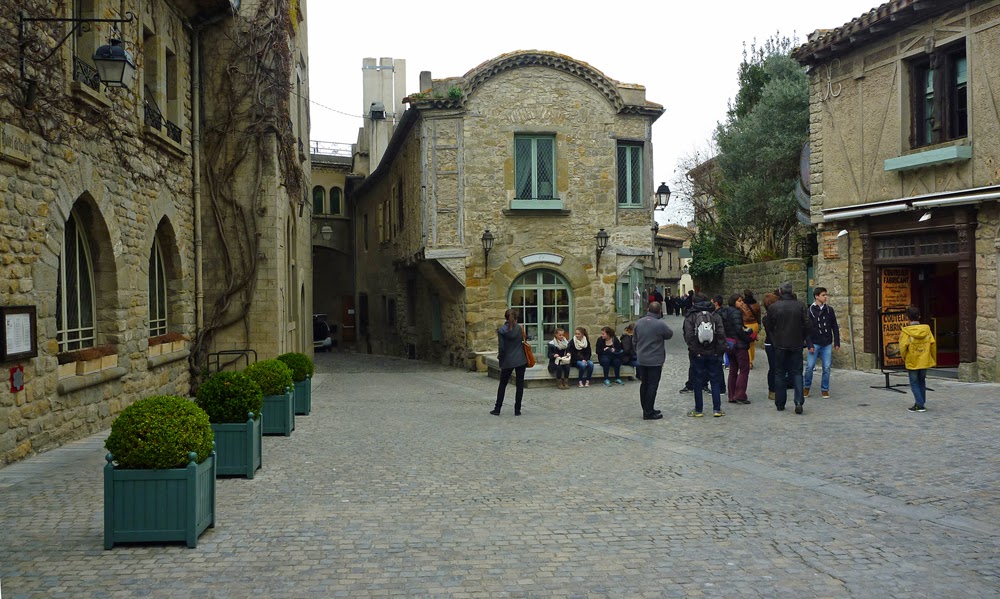 Inside the walls are many shops and restaurants, two up-scale hotels and some guest houses. Although it was Sunday and all the businesses down in Ville Basse were closed, up in La Cité everything was open for business and they were mostly bustling with clientele.

After a final shopping spree Monday, on Tuesday we drove down to the Mediterranean coast and southward to Perpignan to return the rental car and to catch a train to Barcelona. The newly completed rapid rail line linking the French SNCF and the Spanish RENFE systems means that passengers can now enjoy the high speed of the TGV to cross-border destinations. The 195-kilometre train trip took only an hour and a quarter, including two station stops. 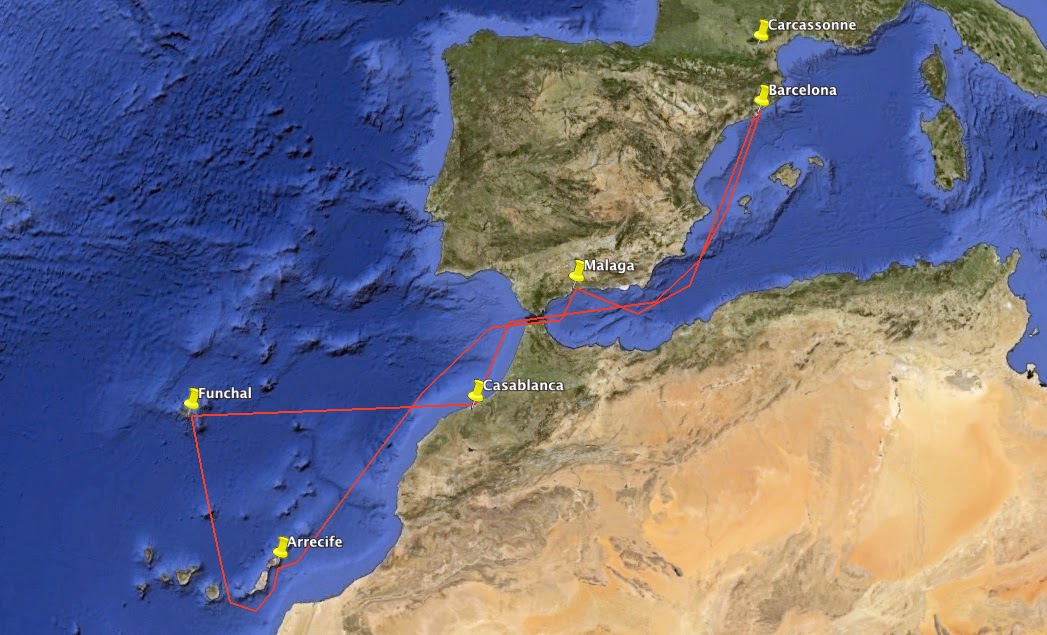 We were in Barcelona to embark on a cruise to warmer climates to warm-up while we waited for the Canal du Midi to reopen for the season. Our ten-day itinerary will take us to Casablanca, Madeira, the Canaries, Malaga and back to Barcelona.