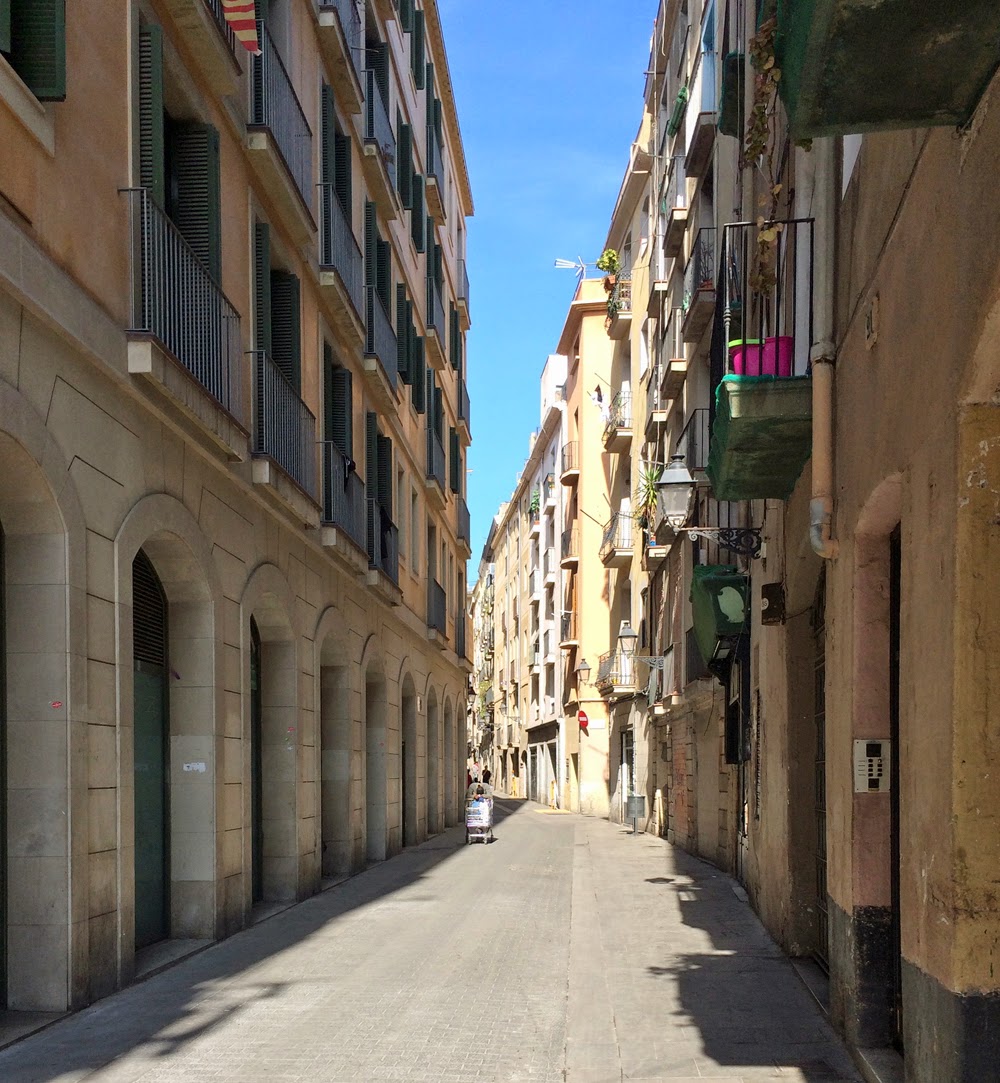 On Tuesday the 18th of March we had returned our rental car in Perpignan and had taken the TGV to Barcelona to head out on a ten-day cruise, which was departing the following evening. From Estacío Sants we took the subway to Las Ramblas and walked the short distance along a narrow side lane to our hotel. 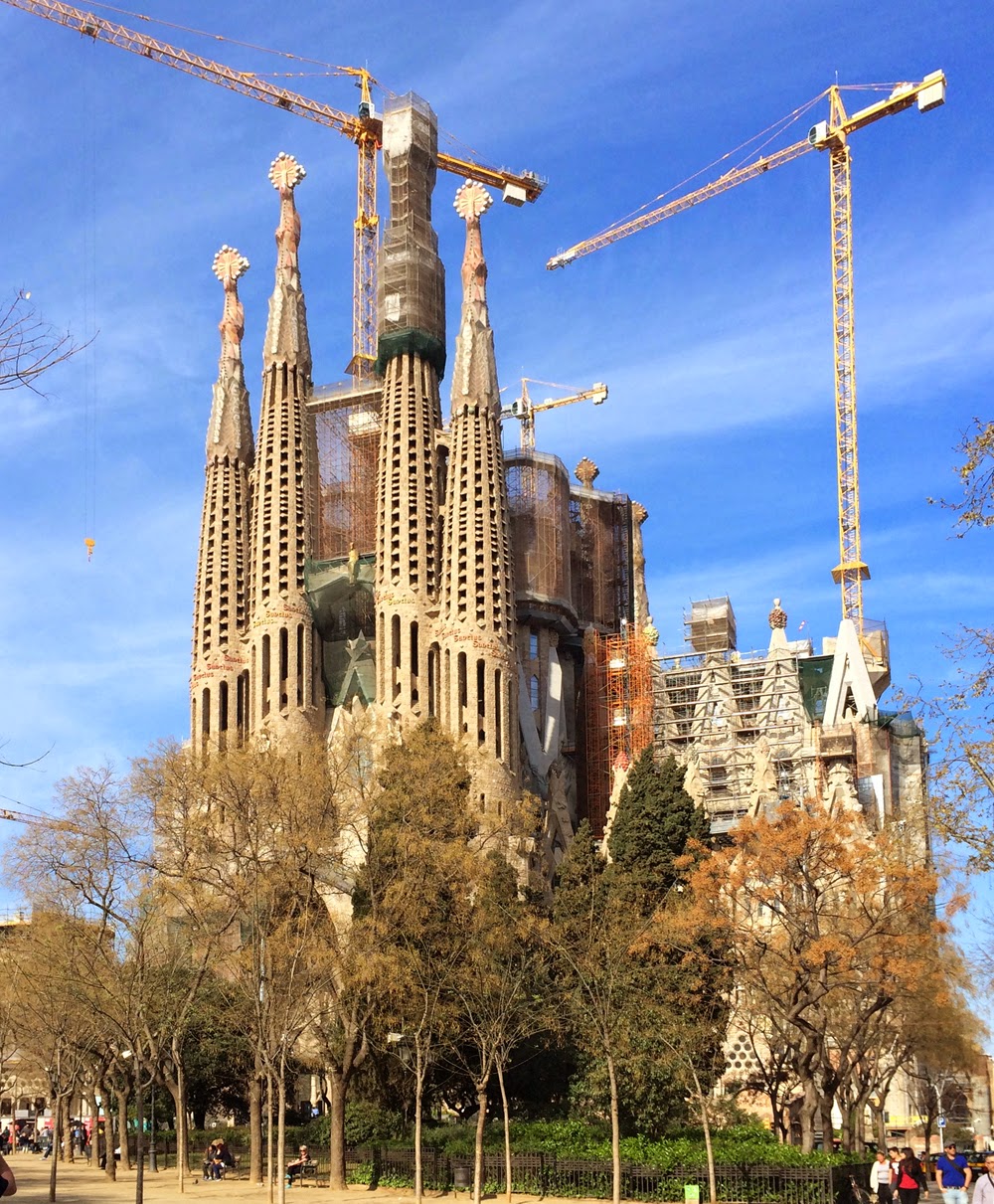 The weather was very pleasant so we decided to walk the five or so kilometres from the hotel to Sagrada Familia. Basílica i Temple Expiatori de la Sagrada Família, which translates to The Basilica and Expiatory Church of the Holy Family was begun in 1882. The following year, Catalan architect Antoni Gaudi took over the project, transforming the design into a wondrous combination of Gothic and curvilinear Art Nouveau. Construction was expected to take a few centuries, and by the time of Gaudi’s death in 1926, the project was less than a quarter complete. Construction ceased during the Spanish Civil War, the building was damaged by Catalan anarchists, most models and many of the plans were destroyed. Work resumed in the early 1950s. 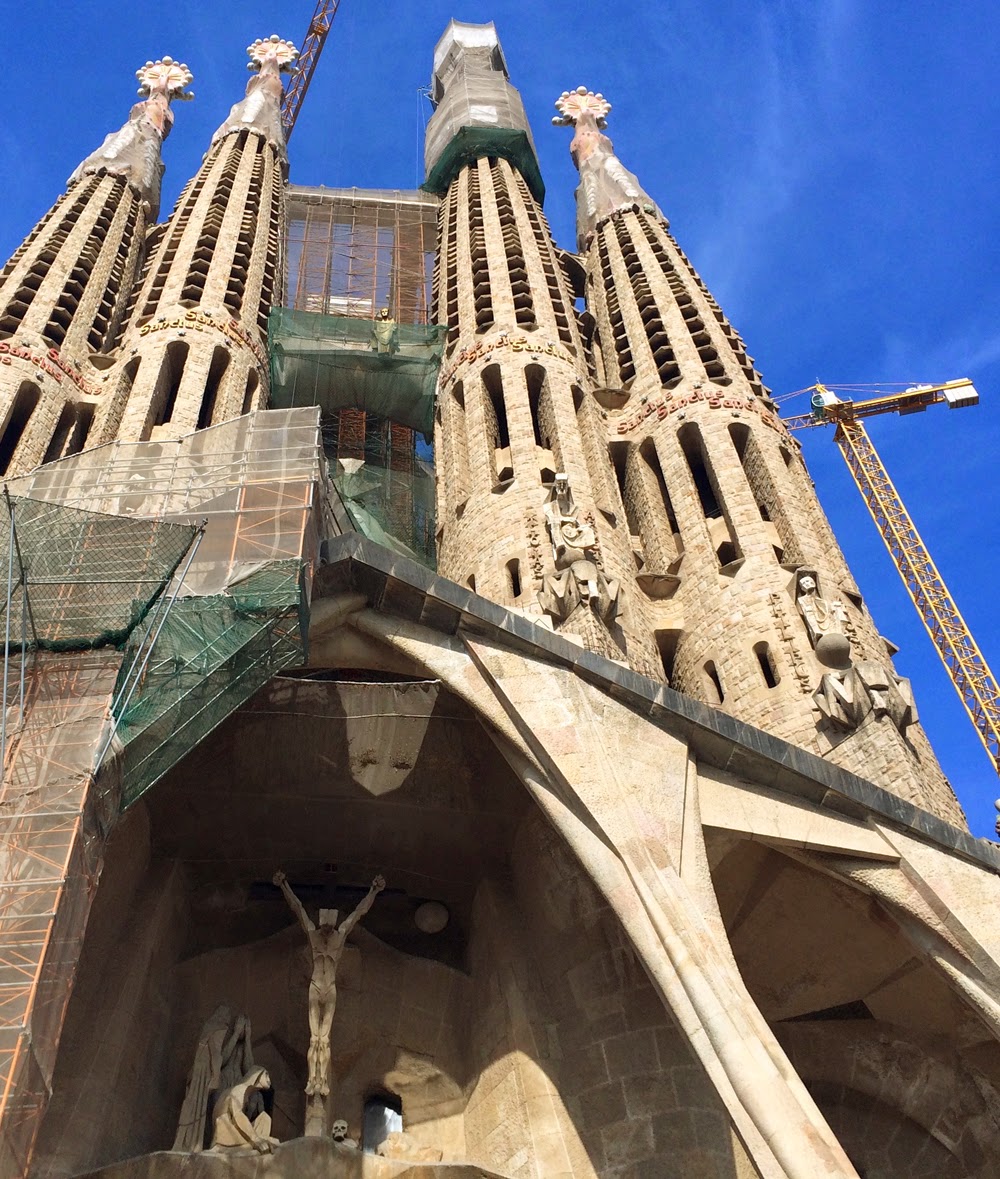 By the mid-1980s computer design technology was being used and computer-guided milling machines enabled stones to be much more quickly carved. These advances dramatically sped the pace of construction, which by 2010 had reached the midway point. In 2011 Pope Benedict consecrated the church and said the first mass in it. 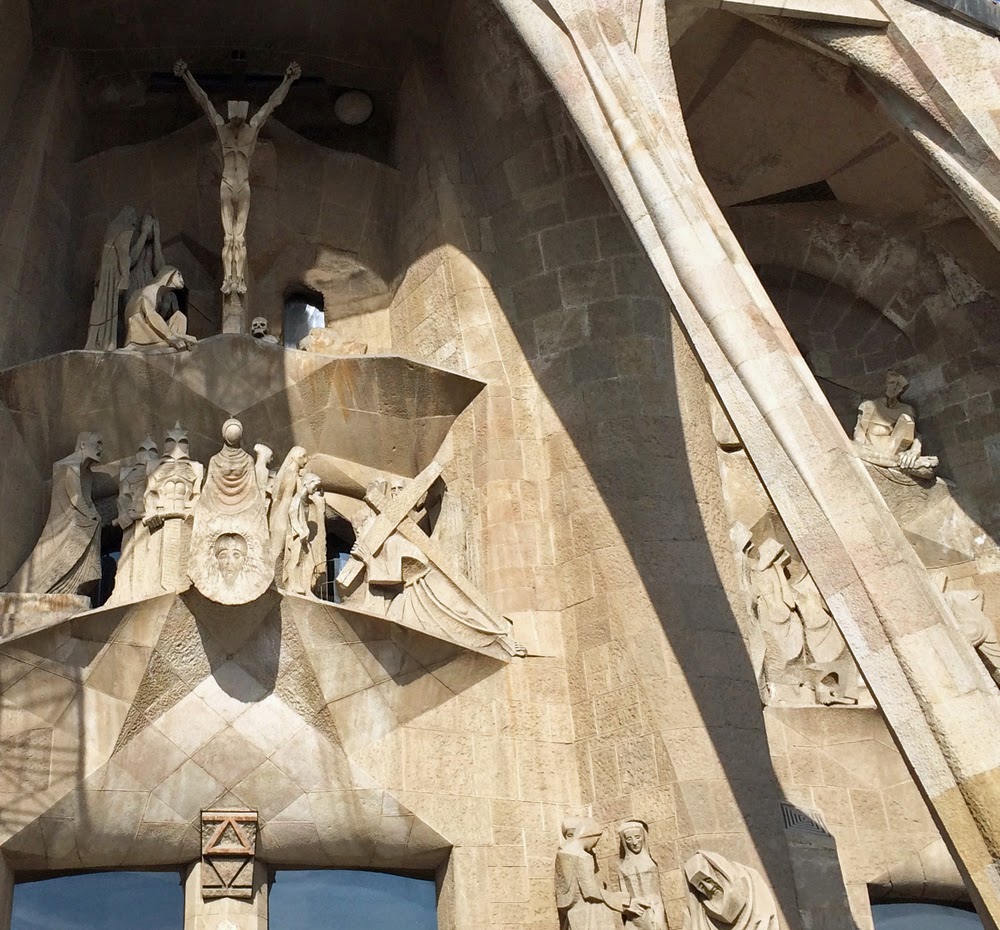 The several centuries time estimate has been scrapped, and even though the many of the largest engineering and construction challenges are still ahead, completion is now predicted for around 2026 or 2028. Although incomplete, the church is listed as a UNESCO World Heritage Site. 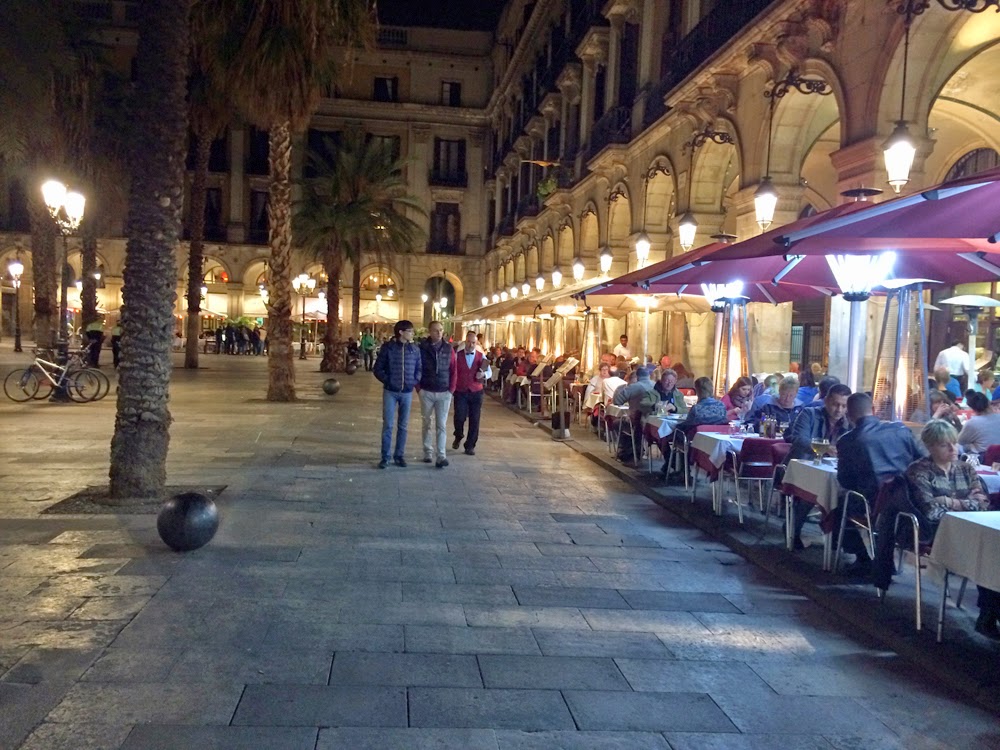 In the evening we strolled into Plaça Relai and looked for a place to have dinner. Facing the square on all four sides are nineteenth century buildings with arched porches, in which is a non-stop line of restaurants and clubs. 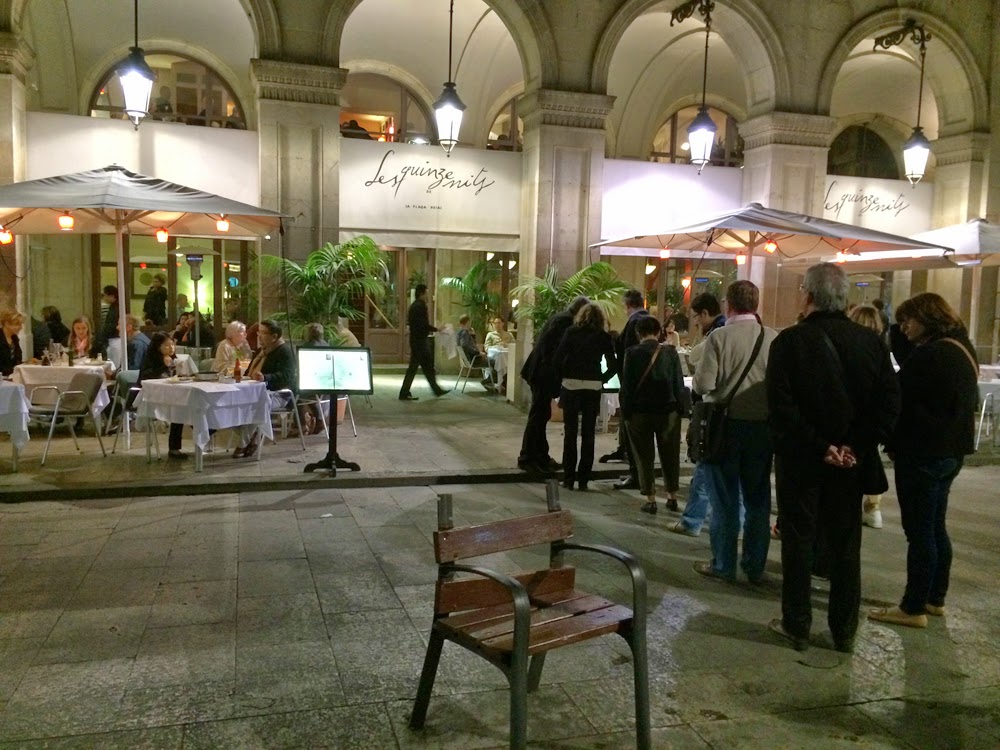 Using our rule-of-thumb, we chose the place with the largest number of diners. While most of the other restaurants had few clients, Quinz Nit was packed inside and out and there was a short queue for tables. The evening was beginning to cool, so we opted for a table inside, and were fortunate to be seated at a window table. 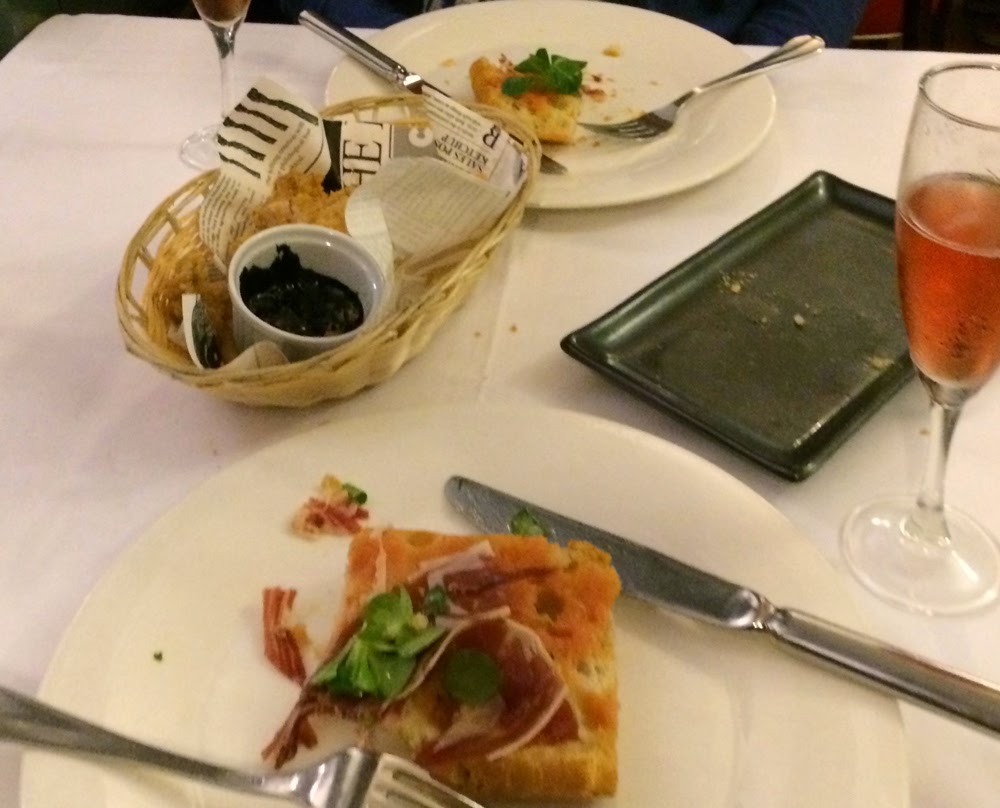 We started with a bottle of Mont Marçal Brut Rosada, a deliciously robust rosé Cava from a house that I had represented in Canada during the 1980s and 90s. With it we nibbled on some tapas and a basket of tender calamari with an ink mayonnaise. For our main course, we each went for the seared tuna, which was done to perfection. Because we enjoy our own cooking so much, we have been rather consistently disappointed when dining out, so this was our first restaurant dinner in over a year. We were prepared to be again disappointed, but instead we were delighted with the meal, the service, the ambience and the price. For just over €50 we had a wonderful evening. 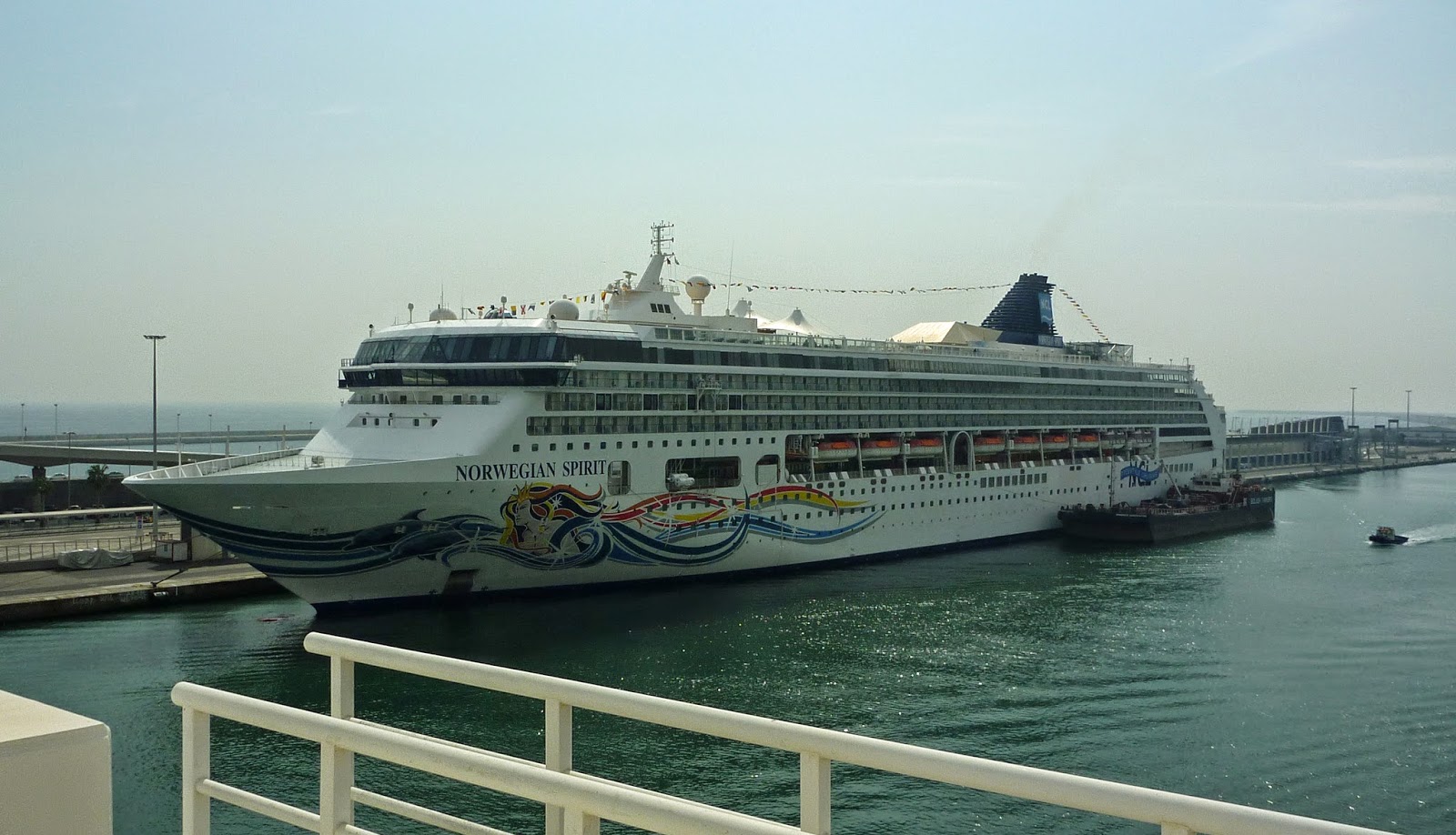 On Wednesday afternoon, after a late breakfast in the hotel dining room, we wheeled our carry-on bags down Las Ramblas, around Mirador de Colom, along Ronda del Litoral and across the bridge leading to Moll Adossat, where our cruise ship, Norwegian Spirit was berthed. She is the oldest ship in the Norwegian fleet, having been built in 1998, and at about 300 metres, she is the smallest of the fleet. She accommodates 2000 passengers and about 900 crew. 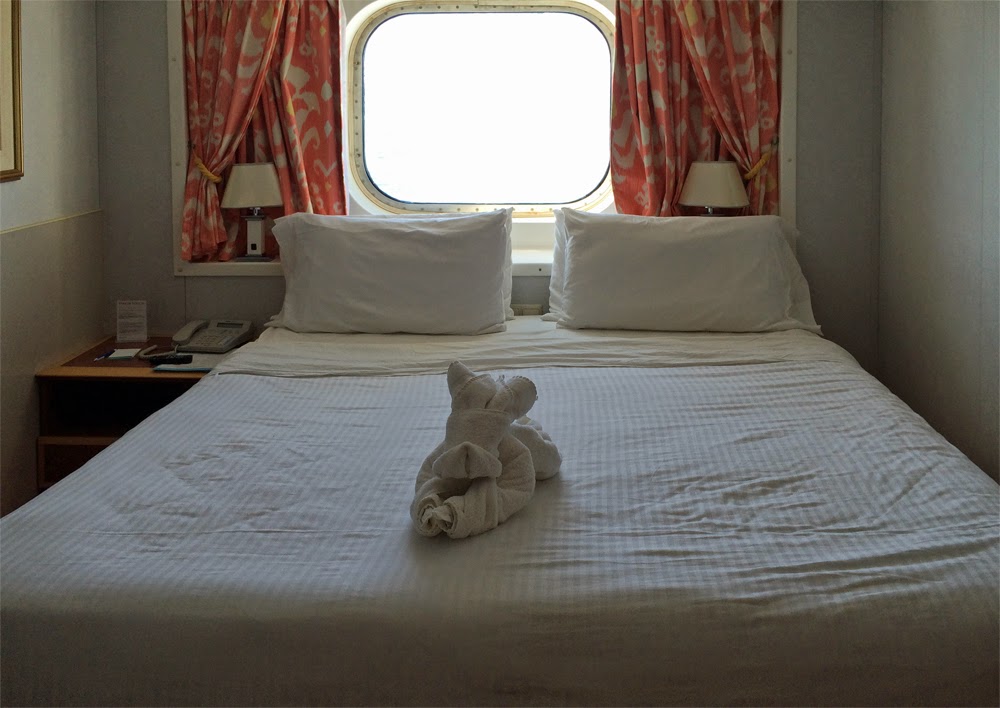 We fortunately arrived from our three kilometre walk between the busloads of embarking passengers, so our check-in was quick and efficient. With carry-on luggage only, we breezed through, found our cabin and quickly unpacked and settled-in. After all the announcements and the mandatory lifeboat drill, we began relaxing into our first do-nothing experience in many years. The ship features free-style dining in a choice of ten restaurants with a casual dress atmosphere. 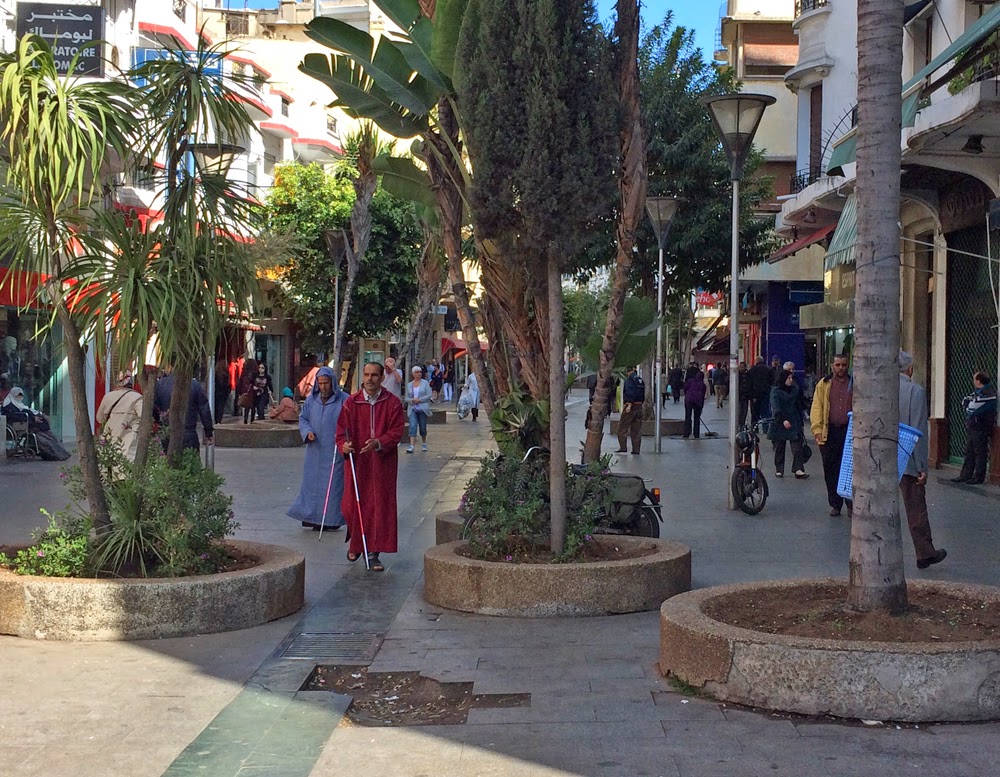 The ship departed mid-evening on Wednesday and steamed overnight, passing through the Straits of Gibraltar shortly after sunset on Thursday. Mid-morning on Friday we berthed in Casablanca and after the rush had subsided, Edi and I took the free shuttle into the centre of town. It is a dirty, squalid place with crumbling infrastructure; we felt rather uneasy about our security. The current street begging fad appears to be playing blind. We looked in some shops searching for things of interest, but our choice seemed to be between tacky imported souvenirs and garish local stuff. We passed and took the shuttle back to the ship. 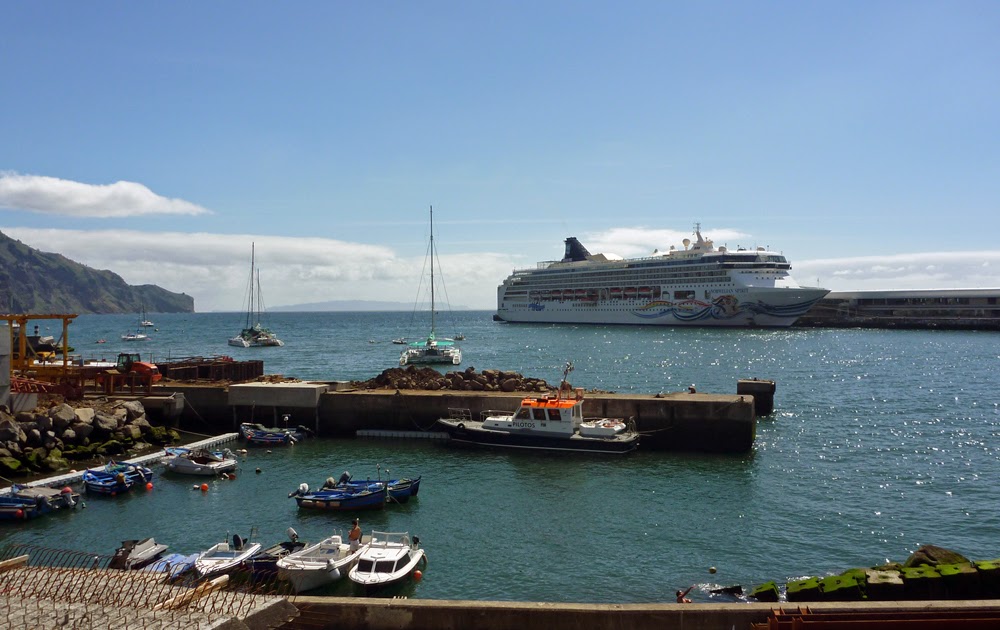 An evening departure and a day and a half at sea brought us on Sunday morning to Funchal, Madeira. A pleasant two kilometre walk along the pier and the waterfront brought us into the centre of the city, which climbs the steep slopes above the water. 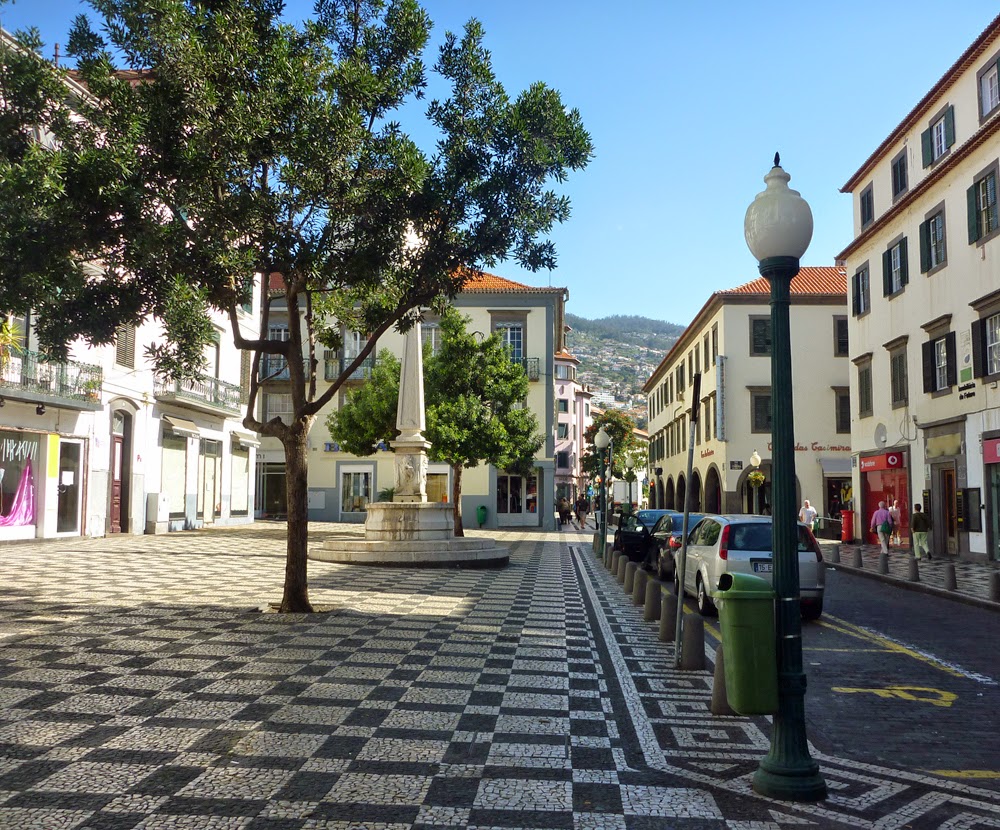 The city is clean and tidy and the sidewalks are mostly done in attractive tile or stone mosaics. There is a very obvious pride of place among the locals and the city exudes a welcoming atmosphere. 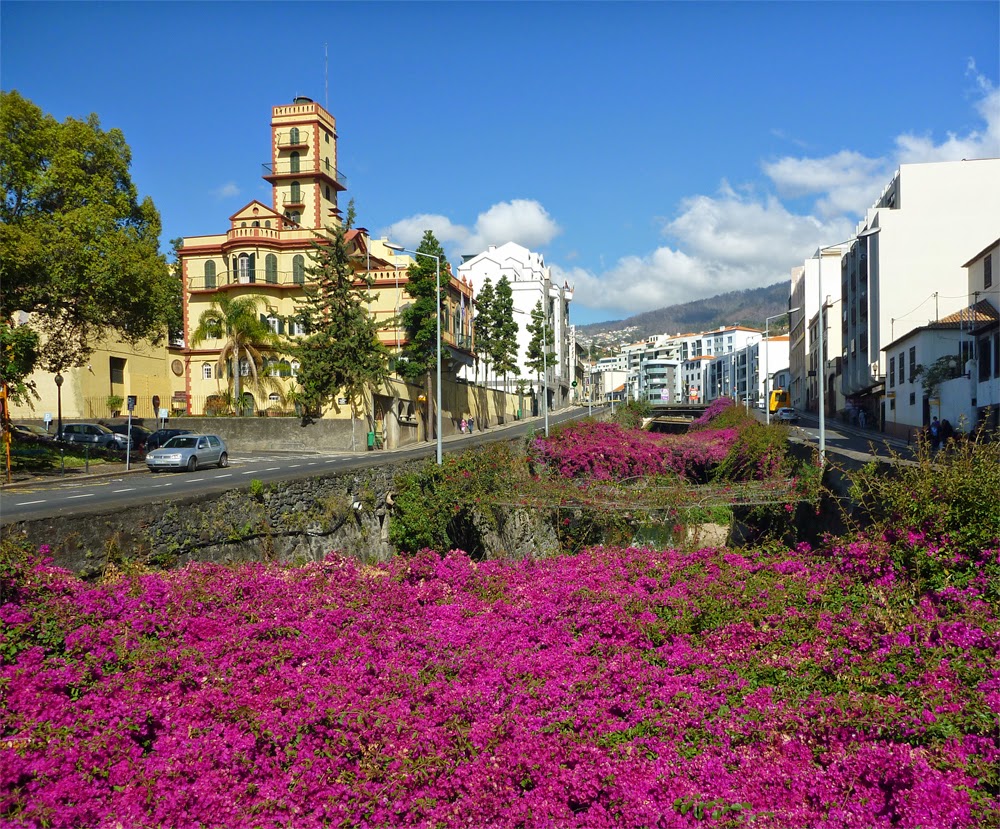 There are riverbeds which run down the steep slopes through the city. Much of the time these are dry or nearly so, but during the rains they are raging. To enhance the appearance of the stagnant spillways, beds of flowers grow from a wire mesh strung across them. 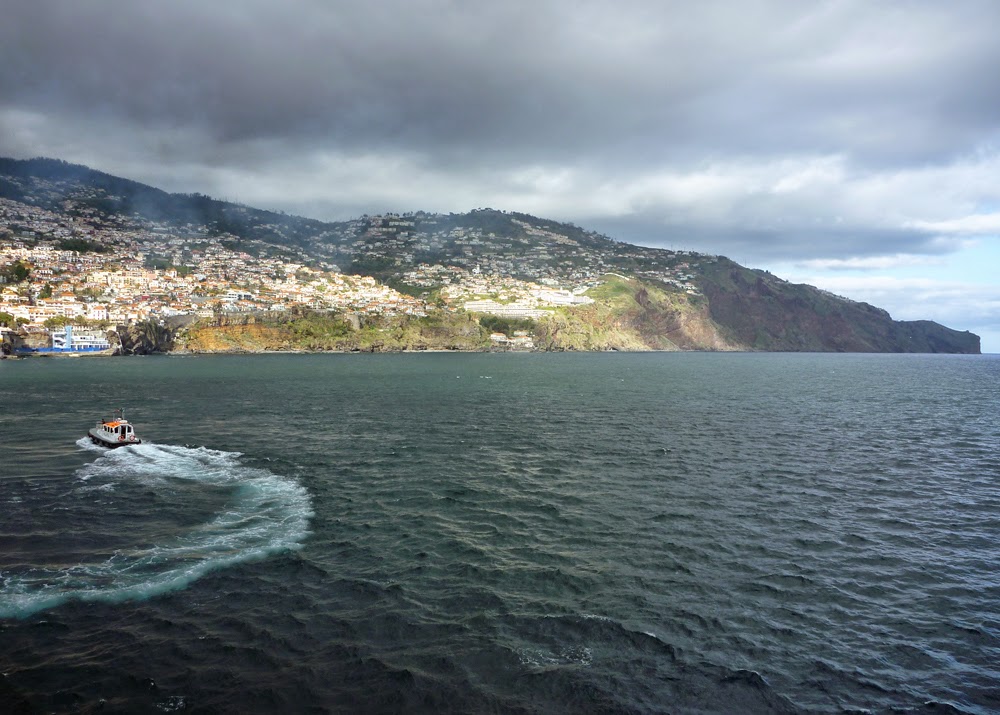 There is free public wifi in many of the squares and pedestrian streets in Funchal, but with so many sitting and browsing, the connection was too slow for us. We paused at a sidewalk café for espressos and caught-up with the world on our iPhones using the café’s wifi. In the early evening the pilot guided us out of the harbour and left us to continue southeastward overnight.

The seas increased as we entered the Trade Winds and we watched spume being blown off the breaker tops in the Force 8 winds. Our course had the wind, swell and seas abeam and frequently the ship’s stabilizers couldn’t keep-up with the confusion. We rolled and lurched, sea sick bags appeared throughout the ship and few people were about. We used the time to explore the ship without the jostling crowds. 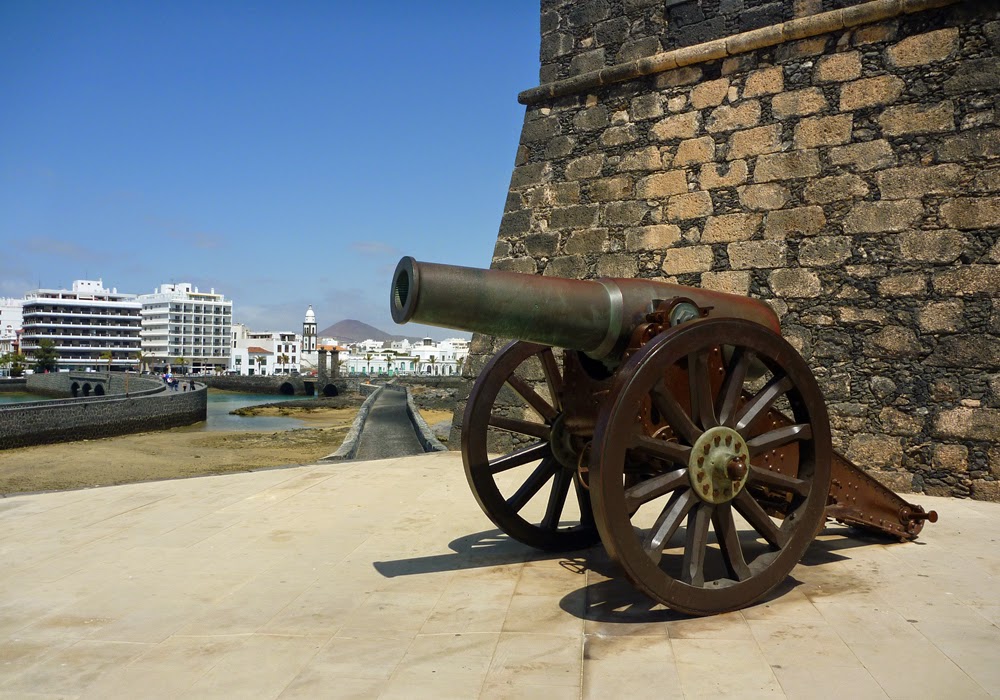 On Monday morning we entered the harbour in Arrecife, the Canaries and the ship worked for nearly half an hour with its bow and stern thrusters to come alongside against the 40-knot wind. We took a shuttle bus into town and looked around. The centre of town is vapid, composed mainly of up-market international brand name shops for the tourists. The hills are crowded with condominium developments with many more under construction. To furnish these is an Ikea store and quite a few copycats. We walked the three kilometres to Ikea to pick-up the last few storage items we needed for Zonder Zorg's galley and walked back to the ship against the gale force winds. 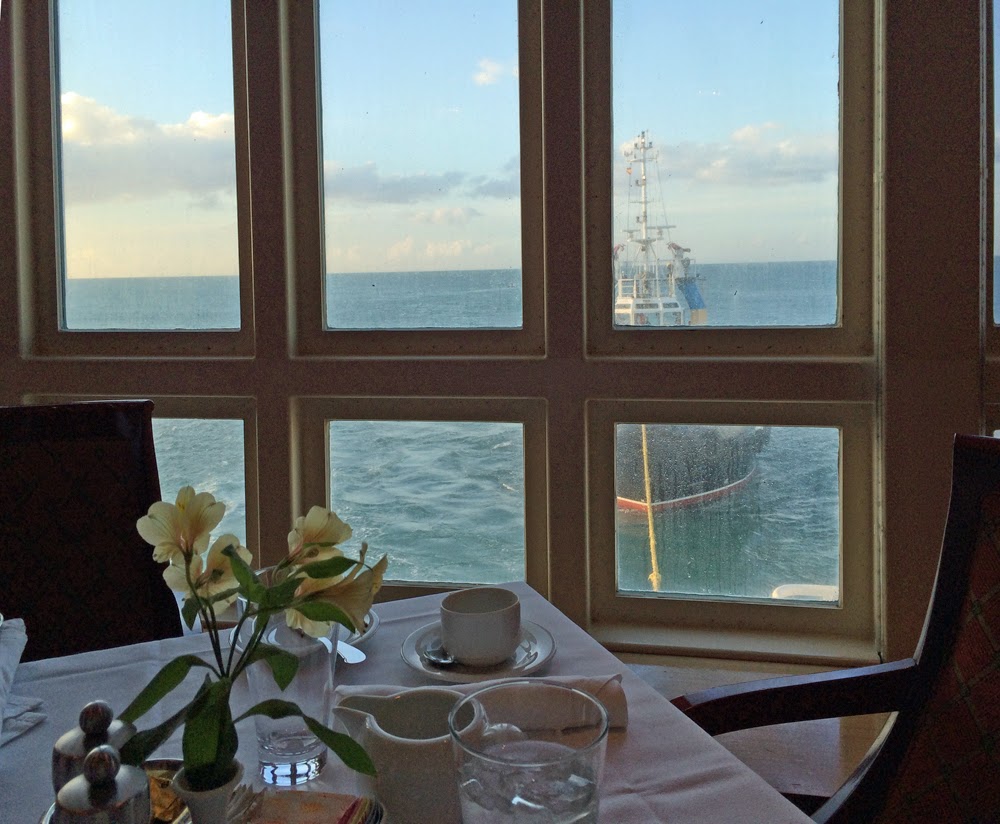 Monday evening the ship slipped from the wharf and we headed back northward with the Trade Winds on the starboard bow. The winds and seas eased through the following day and it was rather calm Tuesday night as we transited the Straits of Gibraltar. Our breakfast entertainment on Wednesday was watching the maneuvering of the stern tug as we entered Malaga Harbour. 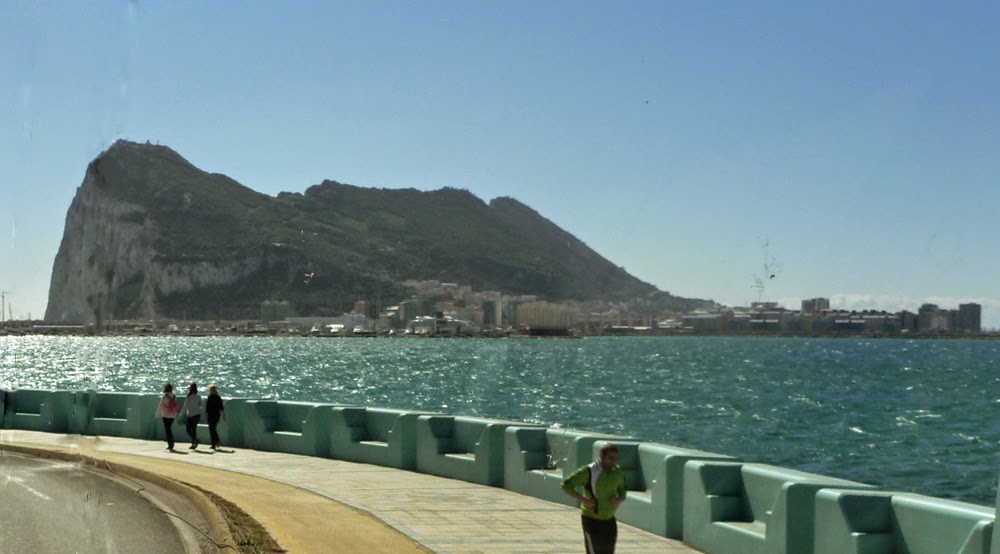 We had signed-up for a trip to Gibraltar, since neither Edi nor I had been there. A two-hour bus ride brought us to the rock and a further forty-minute crawl took us through the border post and into Gibraltar so Edi could tick-off her 86th country and I my 77th. 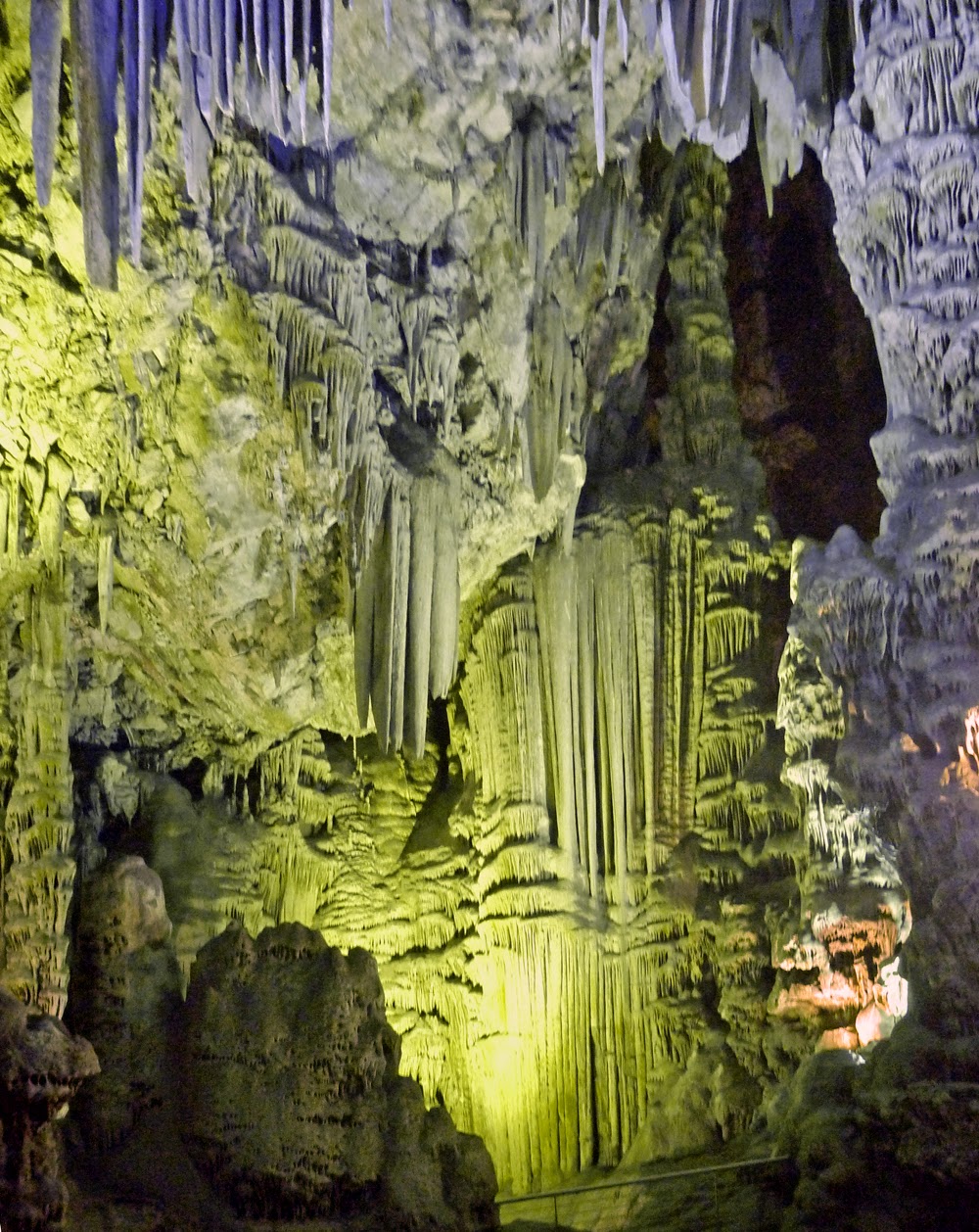 Because of the slowness at the border, there wasn't time to walk up to the top of the rock and get back before the bus left, so we headed over to the cable car base. It was closed because of high winds, so for 30 pence less than the cable car rides, we took a guided mini van tour, which the driver said took in much more than the cable car ride. After a stop at a lookout, we continued on to St. Michael's Caves at about 300 metres above sea level. There is evidence of human habitation in the caves dating to at least 20,000 years ago. The caves of Gibraltar are considered as one of the last homes of the Neanderthal. We wandered through an extensive network of interconnected rooms. 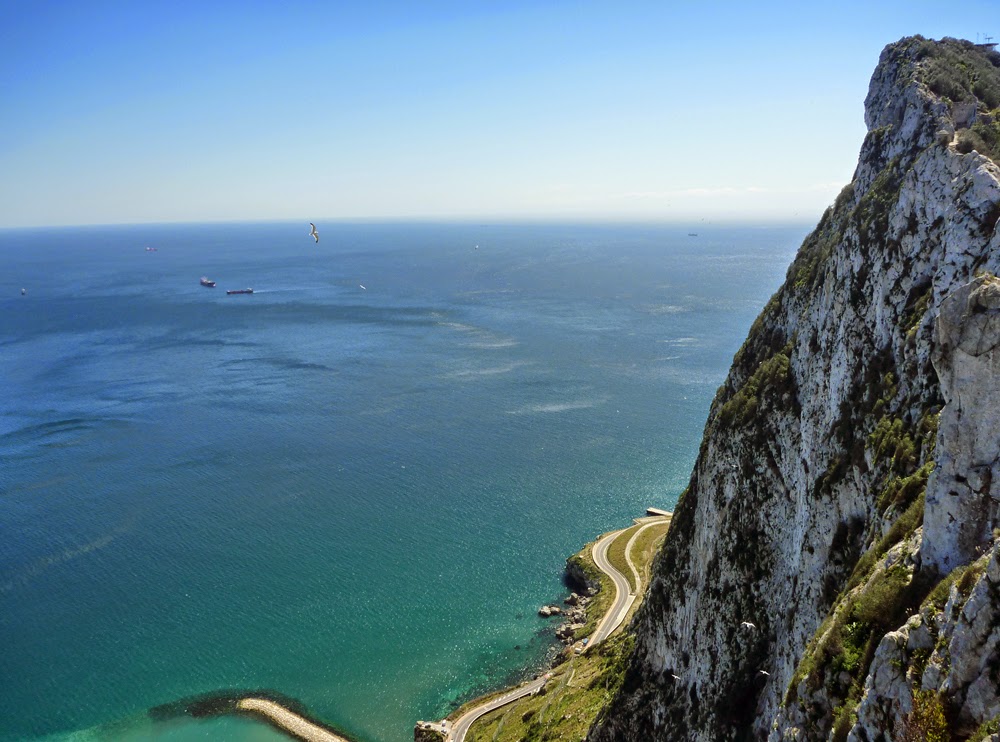 We continued up to the narrow col joining the two portions of the summit ridge and paused for photos. The Mediterranean side is the steeper of the two slopes. 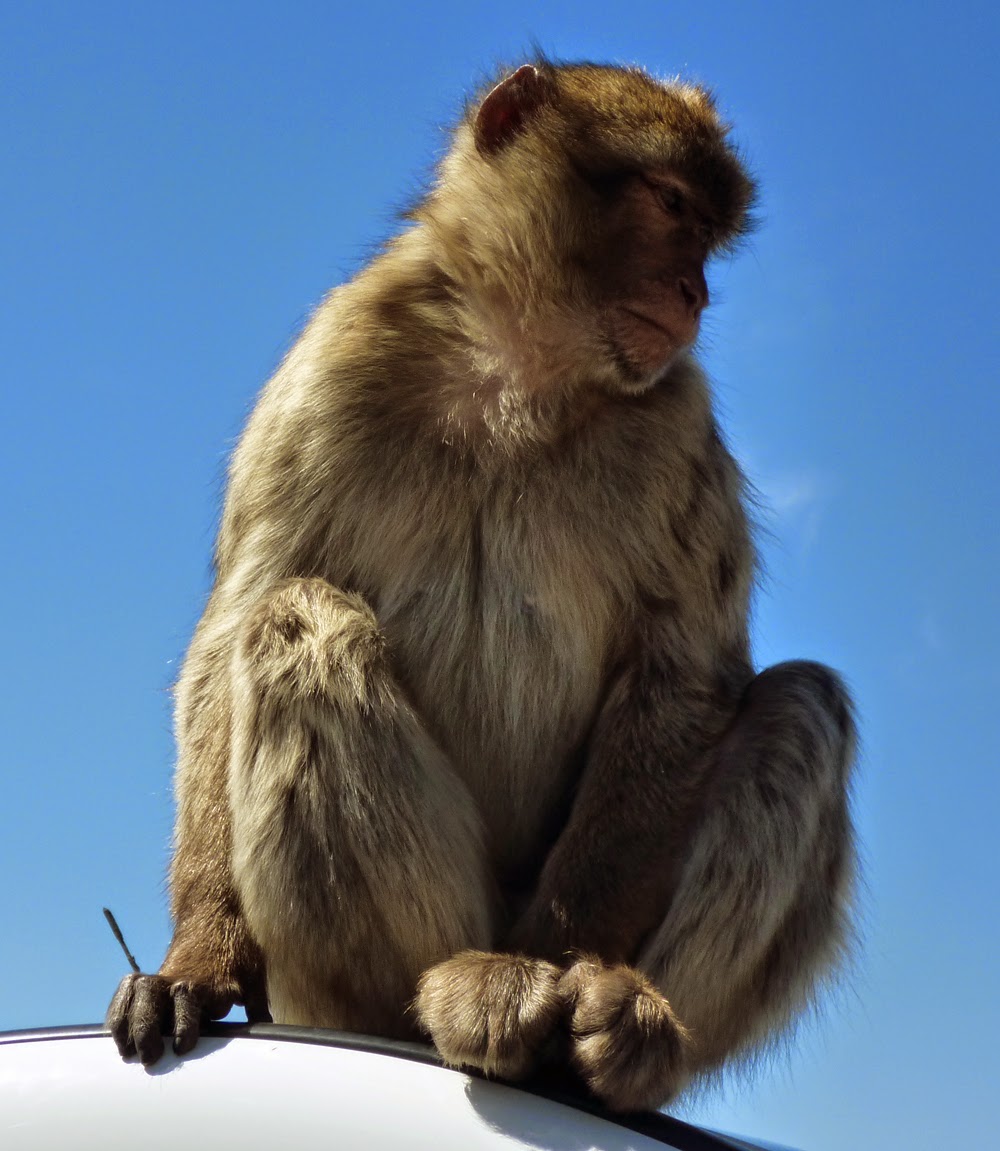 We were entertained by the locals. About three hundred Barbary Macaques inhabit the upper reaches of the rock in five colonies. They are the only wild apes or monkeys living in Europe and they are thriving. Their relatives in the Atlas Mountains of Morocco are in decline and listed as endangered. 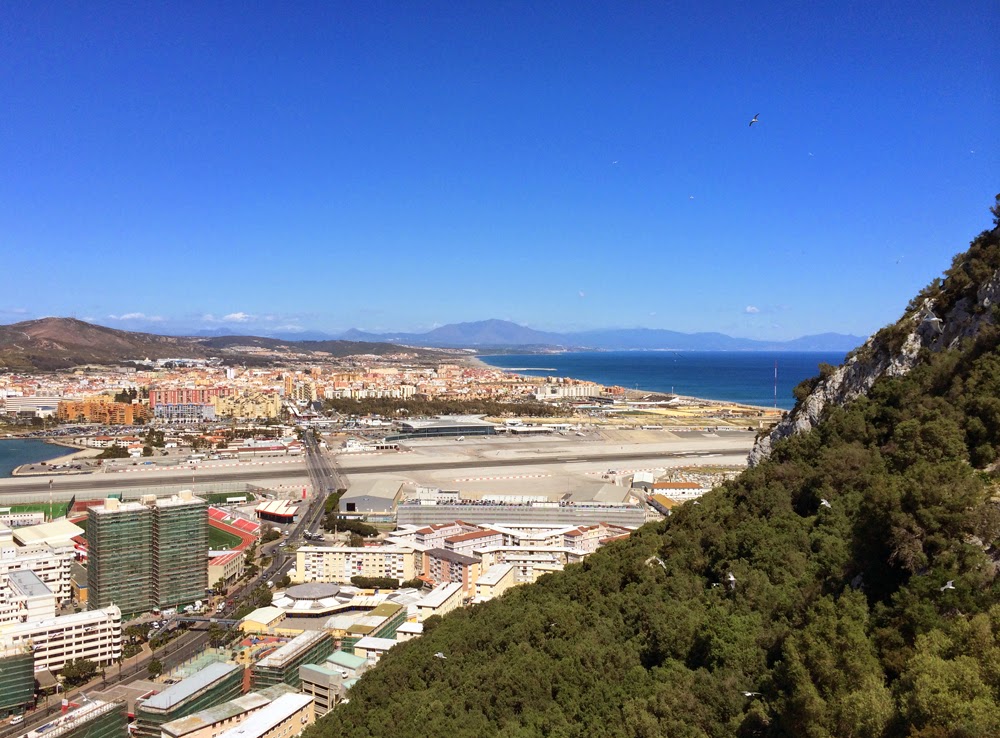 In 1704 a British-Dutch force captured Gibraltar from Spain during the War of the Spanish Succession and in 1713, the territory was ceded to Britain in perpetuity under terms of the Treaty of Utrecht. Gibraltar's airport runs across the only piece of flat land in the territory, the low isthmus that joins it to the south of Spain. The single runway extends into the Atlantic at one end and into the Mediterranean on the other, and the only road into the territory from Spain crosses the runway, controlled by a traffic light. 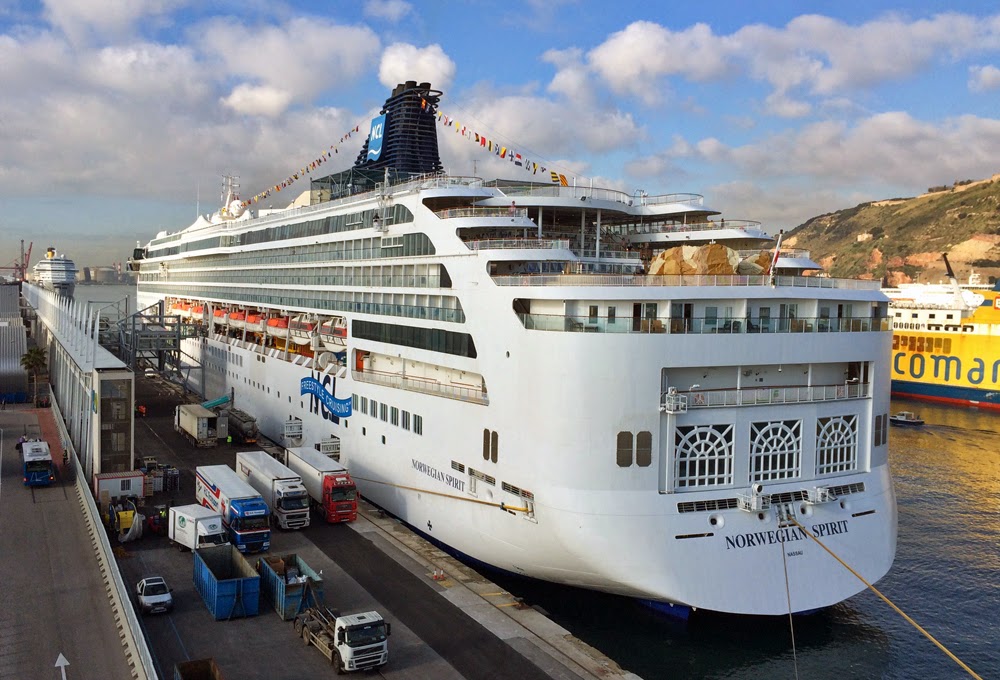 After looking around the downtown, we made it back to the bus with a quarter hour to spare. Three hours later we were back aboard for our last day and a half at sea. On Friday morning we disembarked in Barcelona and rolled our carry-ons across the bridge into the foot of Las Ramblas, from where we took the subway to the train station. In less than three hours we were wheeling our suitcases aboard Zonder Zorg in Carcassonne and getting ready to start some real cruising.