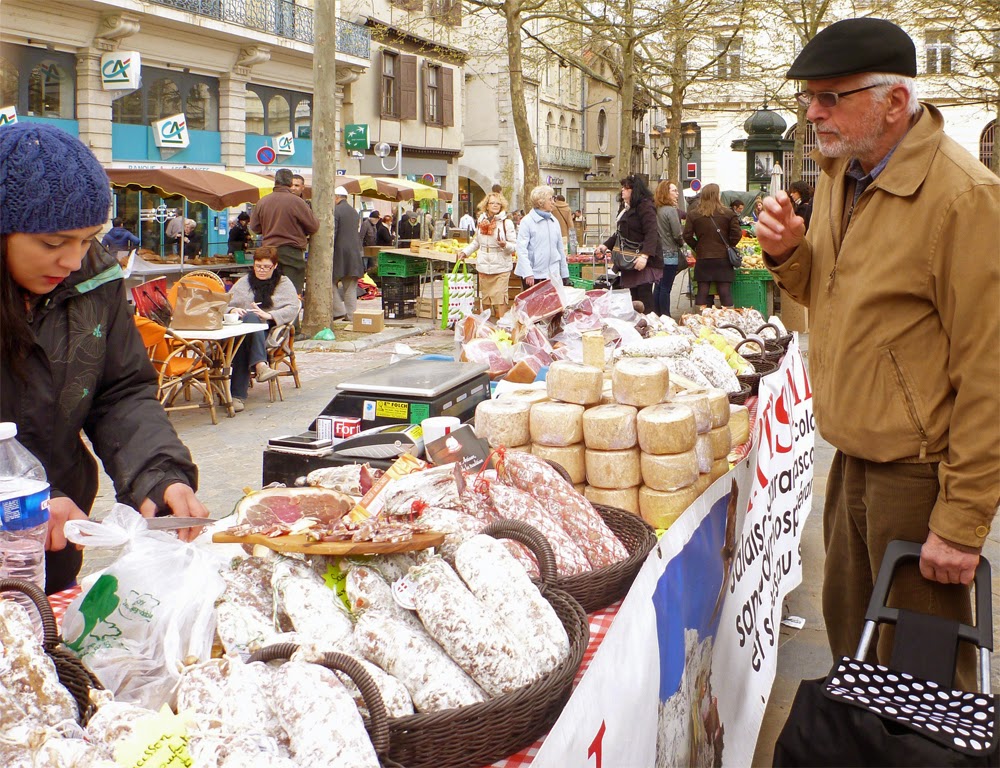 Mid afternoon on Friday, 28 March we returned to Zonder Zorg from our ten-day cruise. We settled-in and began preparing to continue up canal from Carcassonne. There is a market set-up in Place Carnot on Tuesdays, Thursdays and Saturdays, so on Saturday morning we took our wheelie on a walk to begin provisioning Zonder Zorg’s pantry and fridge. We paused at several stands tasting hams and sausages and selecting cuts of those that pleased us. 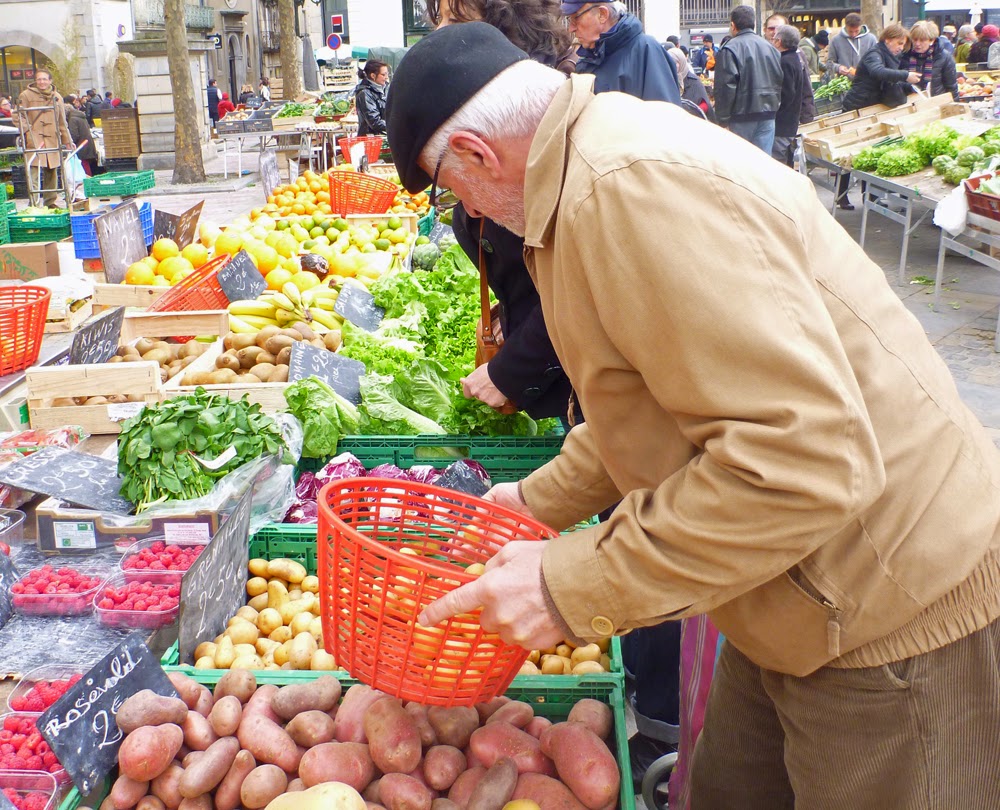 There is a wide selection of local and imported produce of varying quality, so after we had made a full round of the stalls, we chose potatoes from one, red and green peppers and a huge cauliflower from another, avocados and mushrooms from a third and so on until our shopping cart was near full. 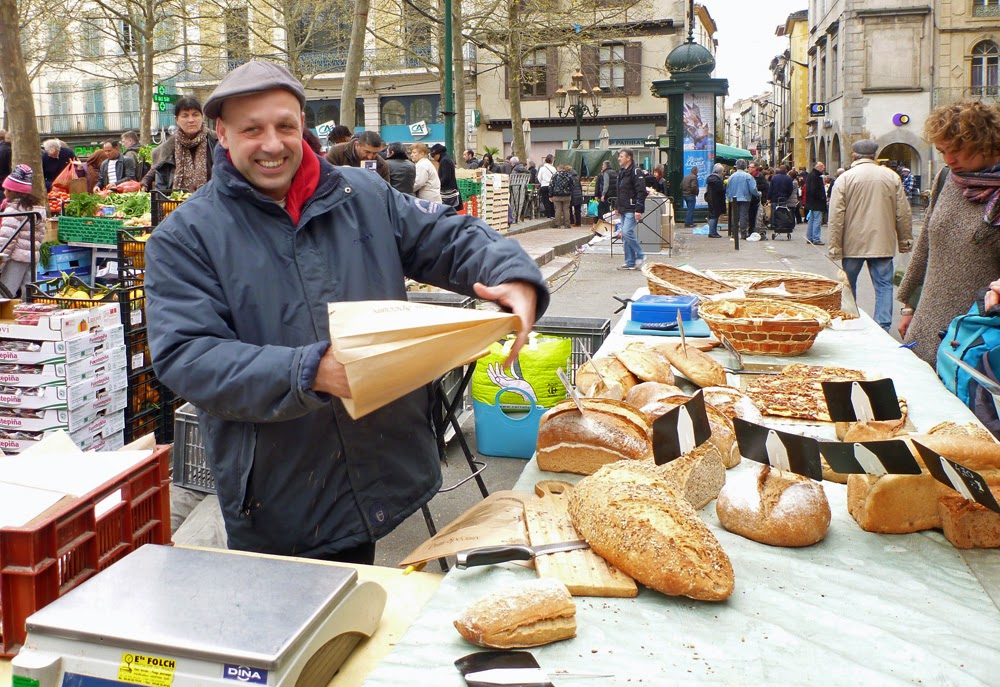 We topped-off the load with some multi-grain bread. After lunch we took a shopping bag to Monoprix, a mid-town department store with a small supermarket on its main floor. There we stocked up with meat, fish and a few grocery items to hold us until Zonder Zorg is closer to a large supermarket. 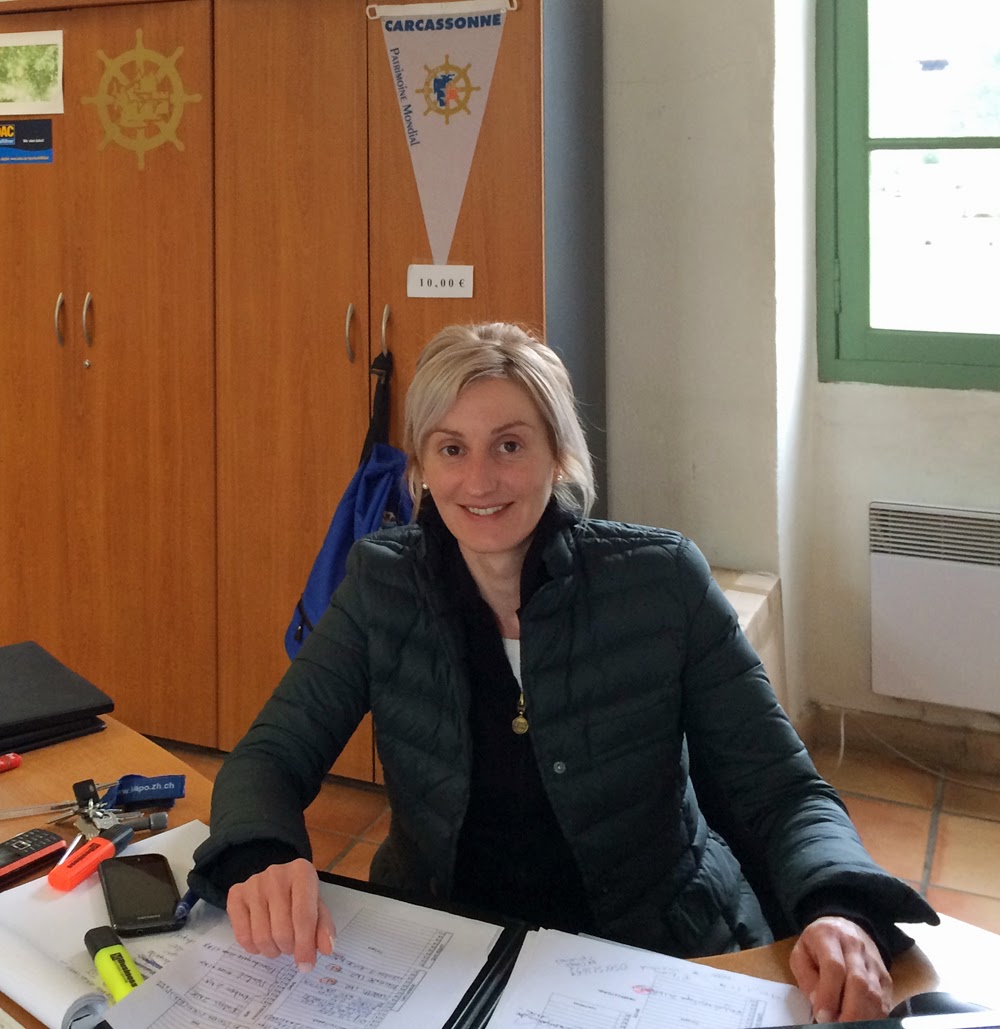 On Monday morning I stopped by the Capitainerie to organise a fuel delivery for the following day. Before we had gone on our cruise, I had spoken with Stéphanie Bourgain, the Capitain du Port about getting  diesel fuel for the boat. She said she could arrange for a truck to come to the boat, but the company needed a day’s notice. While we were away she had polled the other boat owners in the basin and had compiled a list of seven boats wanting fuel. It was now simply a matter of her contacting the company, confirming a price per litre and getting a delivery time. 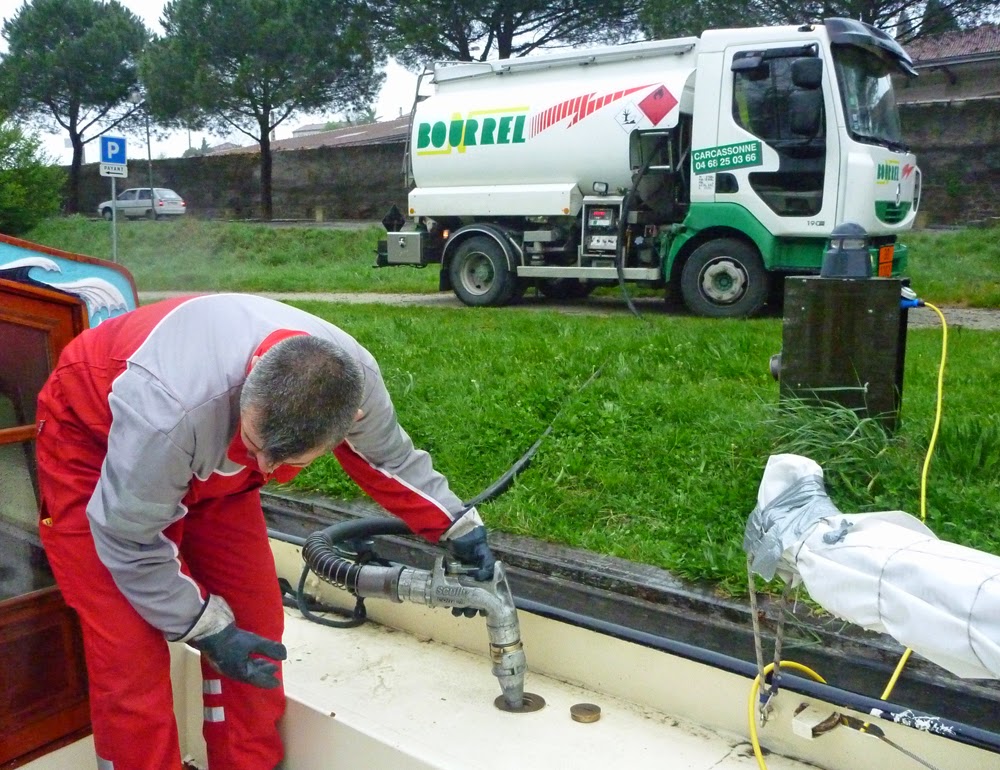 We were the first stop when the truck arrived at 0830 on Tuesday and we took on 300 litres at €1.325. This price was 12 cents per litre cheaper than at the filling station a few hundred metres up the street and only 3 cents more than for the potentially problematic high biodiesel blend at the Leclerc supermarket pump on the western edge of town. 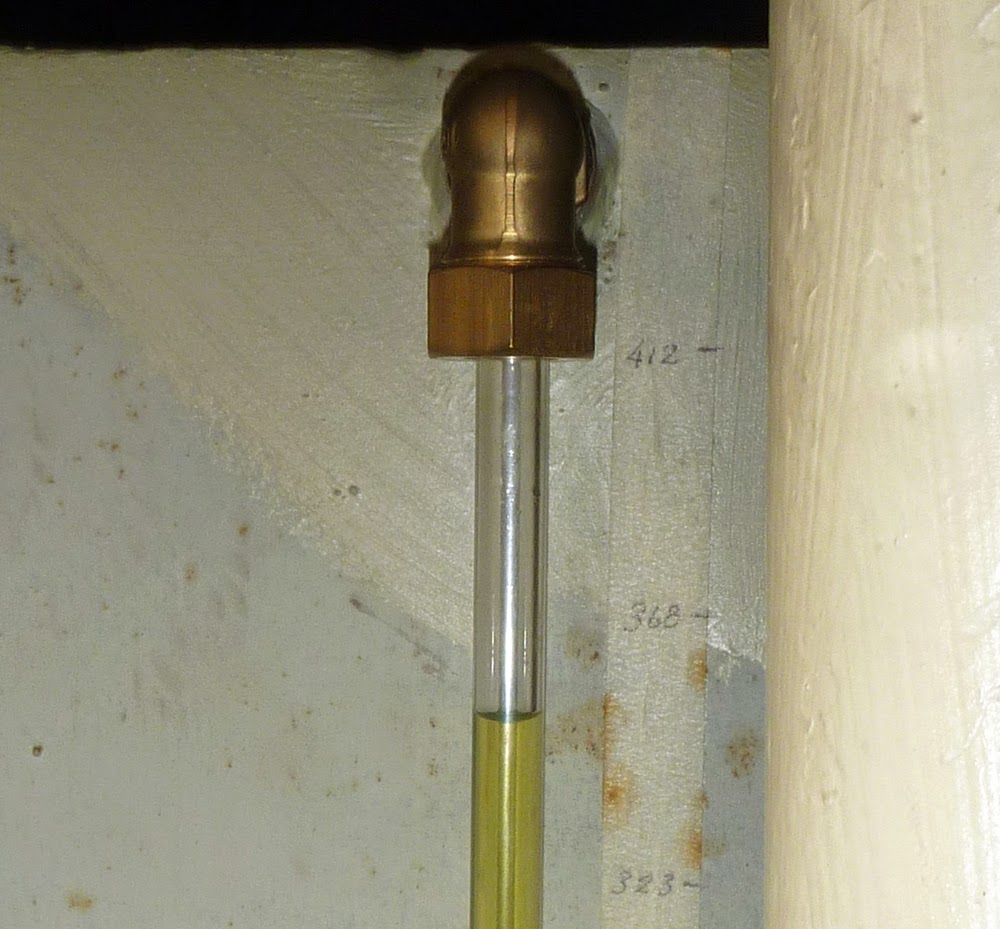 The fill took our gauge to about the 350 litre level, about 100 litres from full and sufficient to do us through the spring and summer. 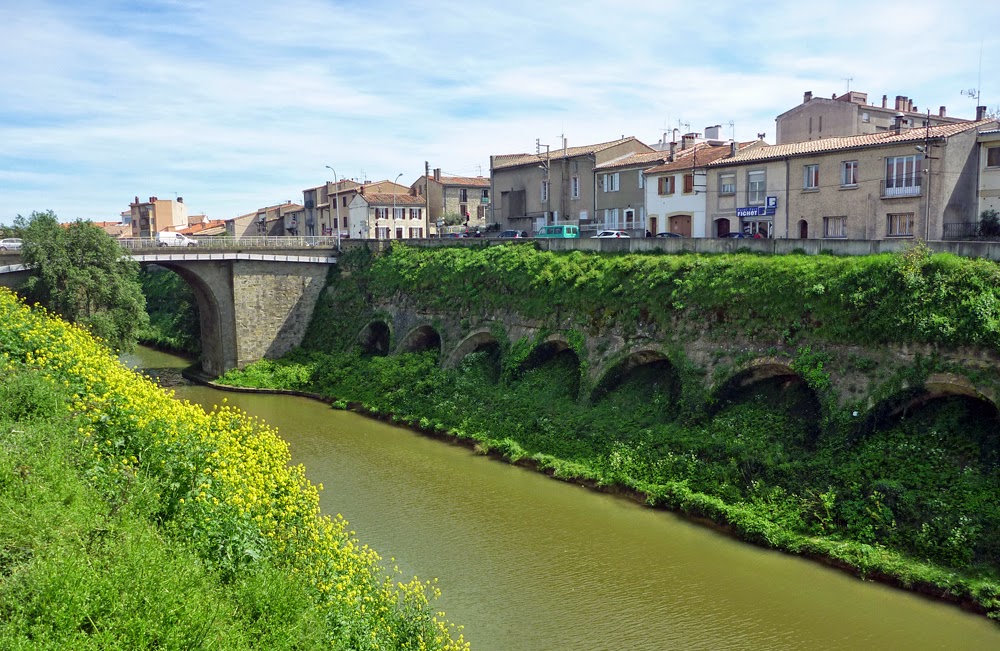 Shortly after noon on Wednesday, after paying our moorage bill and saying farewell to Stéphanie, we slipped our lines and continued up the canal. Almost immediately the canal entered a deep cut with steep, complex masonry walls. 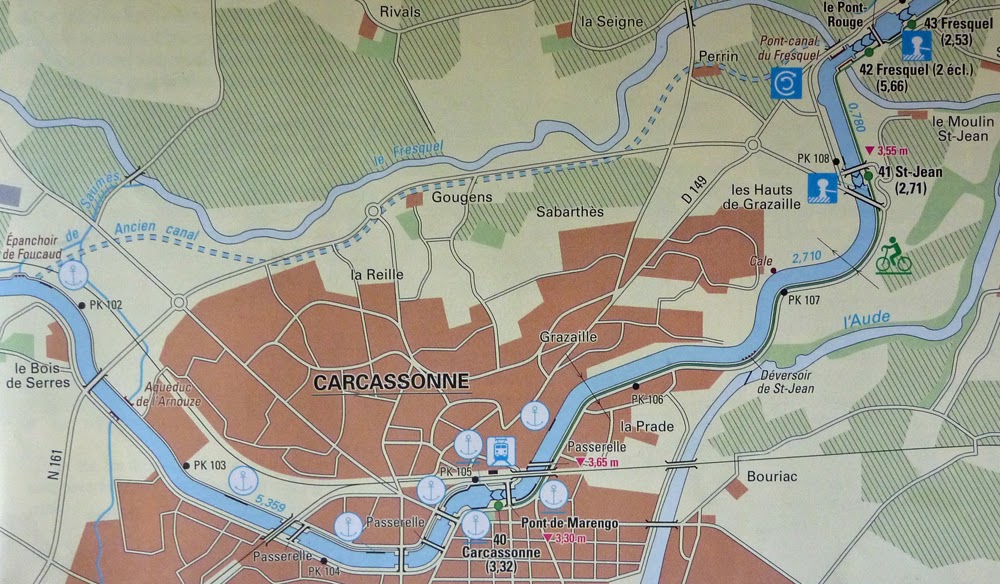 The cut was through a high ridge of land for about a kilometre and it appears to have required extensive excavation and masonry wall reinforcements. I looked at the Du Breil Guide Fluvial chart and saw a double dashed line to the north of the city with the notation: “Ancien canal”. The canal had been re-routed and I decided to dig further after we had paused for the day. 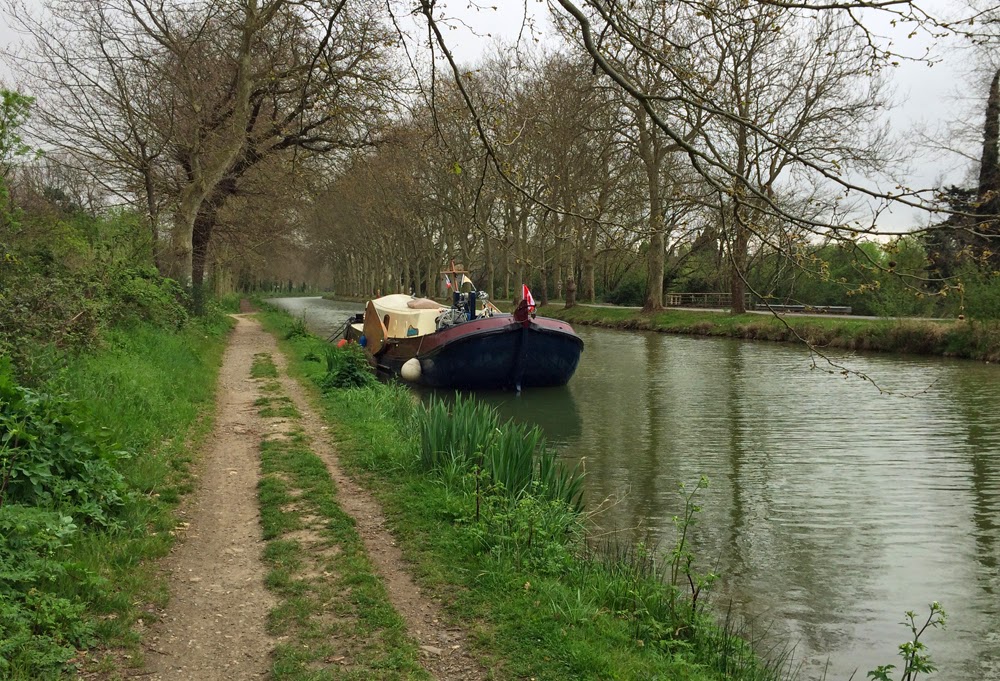 At 1305 we secured alongside the bank with the spud pole and a line to a pin pounded into the bank. We had come 2.3 kilometres and were in a delightfully quiet spot just outside the city and next to a track that led to a small road that led about 400 metres to the huge Leclerc supermarket. It had been cool, glum and rainy for several days and it was forecast to remain the same for a few more, so we decided to pause here for a while waiting for the weather to change. 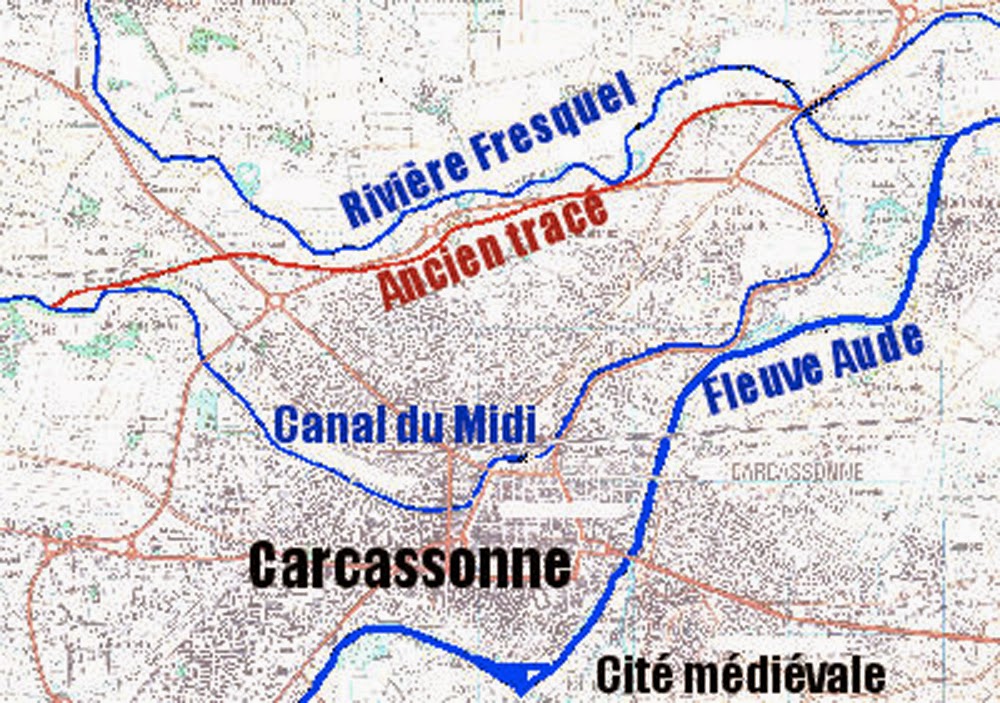 With a good internet connection on my iPhone, I dug into the background of the re-routed canal. In planning the route of the canal, Riquet had used the easiest lines, the ones that required the least digging and the fewest works such as locks, bridges and aqueducts, so the natural route took the canal two kilometres to the north of Carcassonne. In 1669 Riquet’s agents began negotiations with the city of Carcassonne to have the canal run past the city walls. The price asked for the additional work was 100,000 livres. A powerful faction in the city resisted the proposal, so in 1673 the canal was dug along the easiest path, next to the Fresquel River. 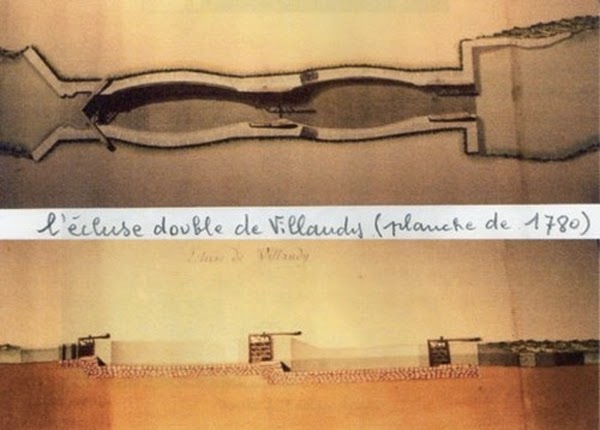 Along the way, a double lock was built at Villaudy at a contracted cost of 16,061 Livres, so the 100,000 quote to Carcassonne for a longer route requiring extensive excavation and masonry work, two locks and several bridges does not seem out of line. 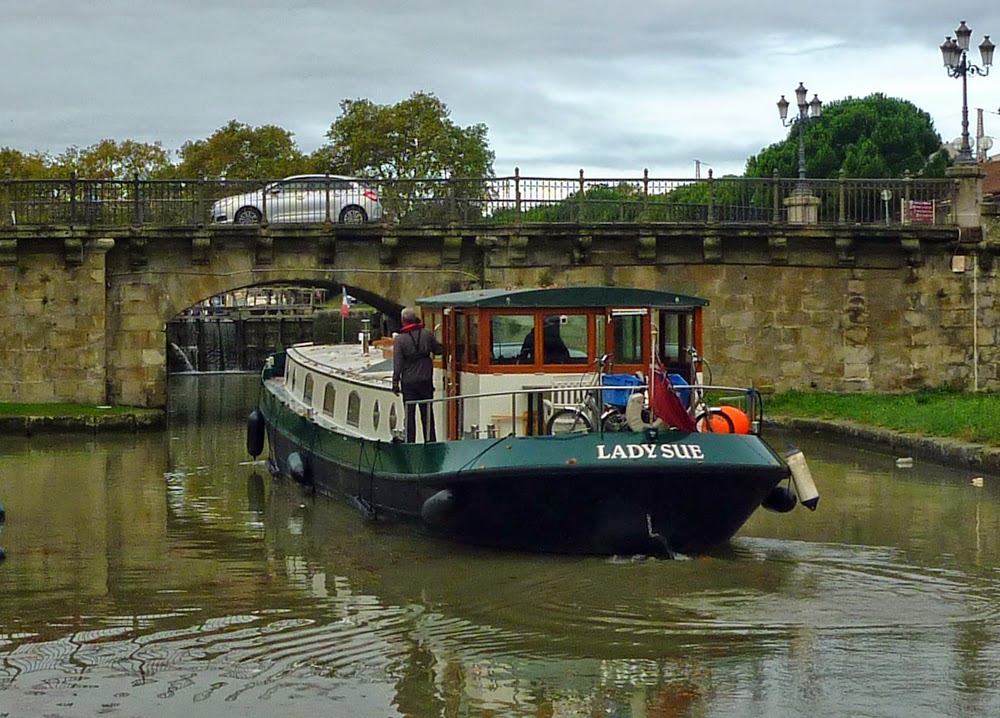 In 1787, after more than a century of watching the canal traffic bypass their city, Carcassonne finally decided to dig a seven-kilometre diversion to bring the canal under their city walls. The works were slowed by the Revolution, but were finally completed in 1810. Pont Marengo, where the canal abuts the north side of the city, was completed in 1800. It did not follow the template of the bridges built between 1667 and 1681, and at 3.3 metres, it is the lowest bridge on the Canal du Midi. 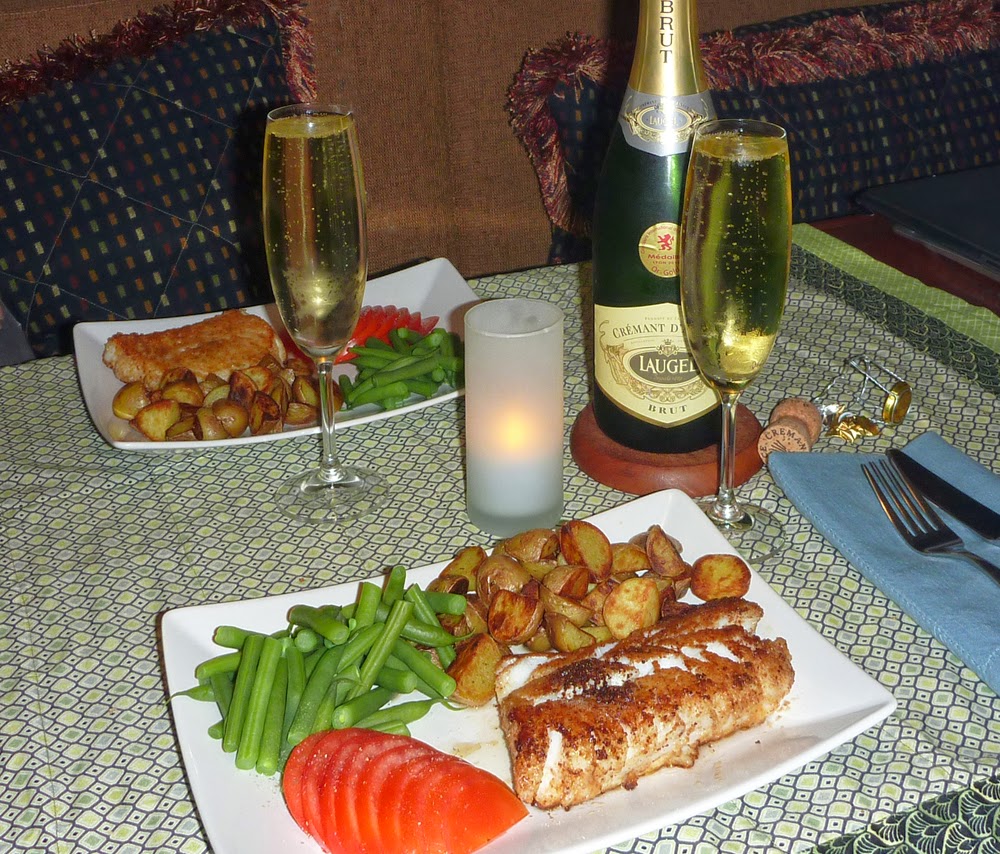 During a pause in the rain we walked along to the supermarket and picked-up some fresh supplies for dinner and breakfast. Back onboard, we enjoyed a celebratory meal to mark the beginning of the year's cruising: Sautéed dos de cabaillaud with roasted mini potatoes and steamed green beans accompanied by a bottle of Crèmant d'Alsace. 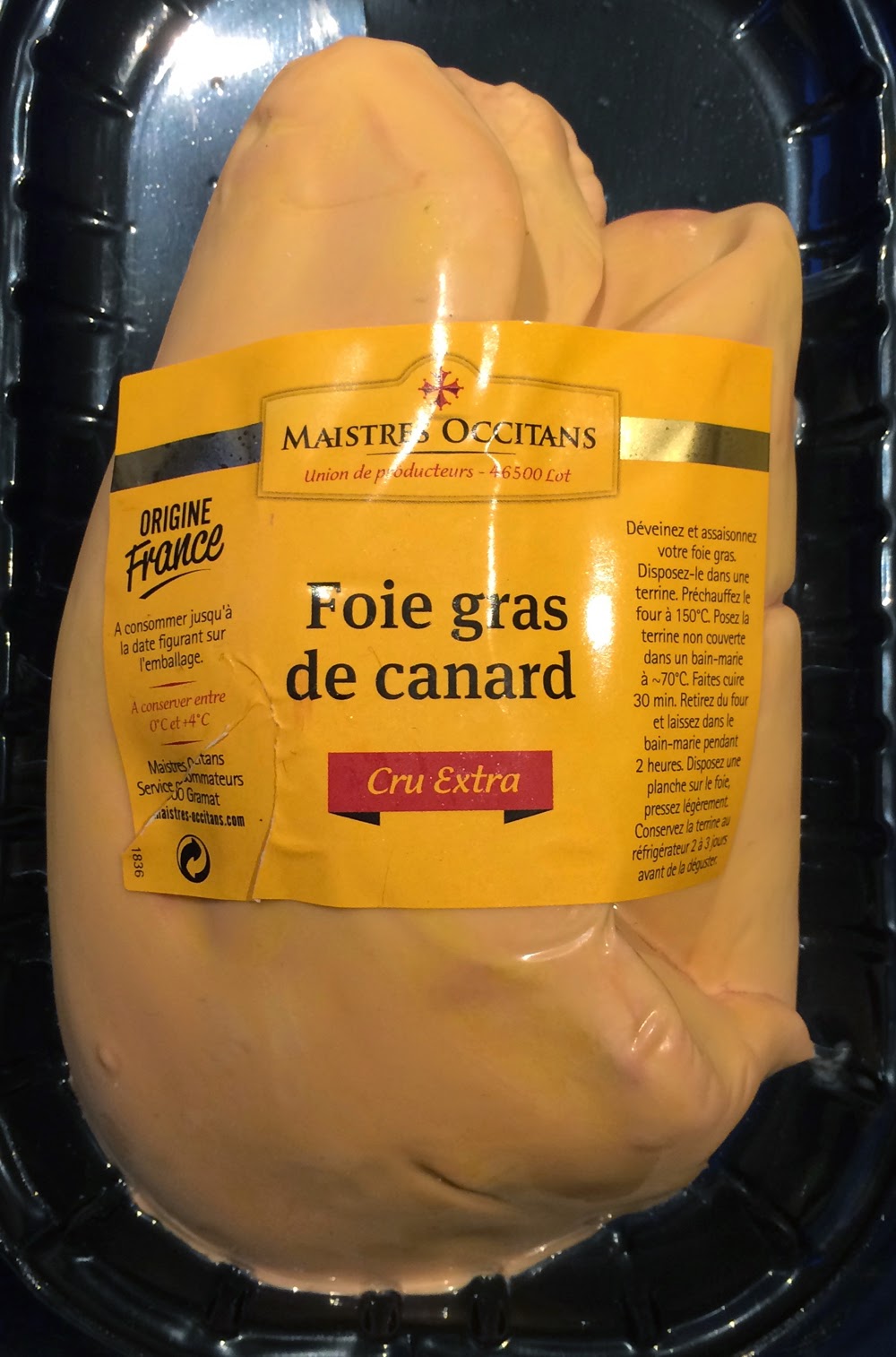 On Thursday we puttered around onboard, cleaning and organising, reading, writing and relaxing. In the evening I played in the galley. I had bought a 550 gram foie gras de canard. 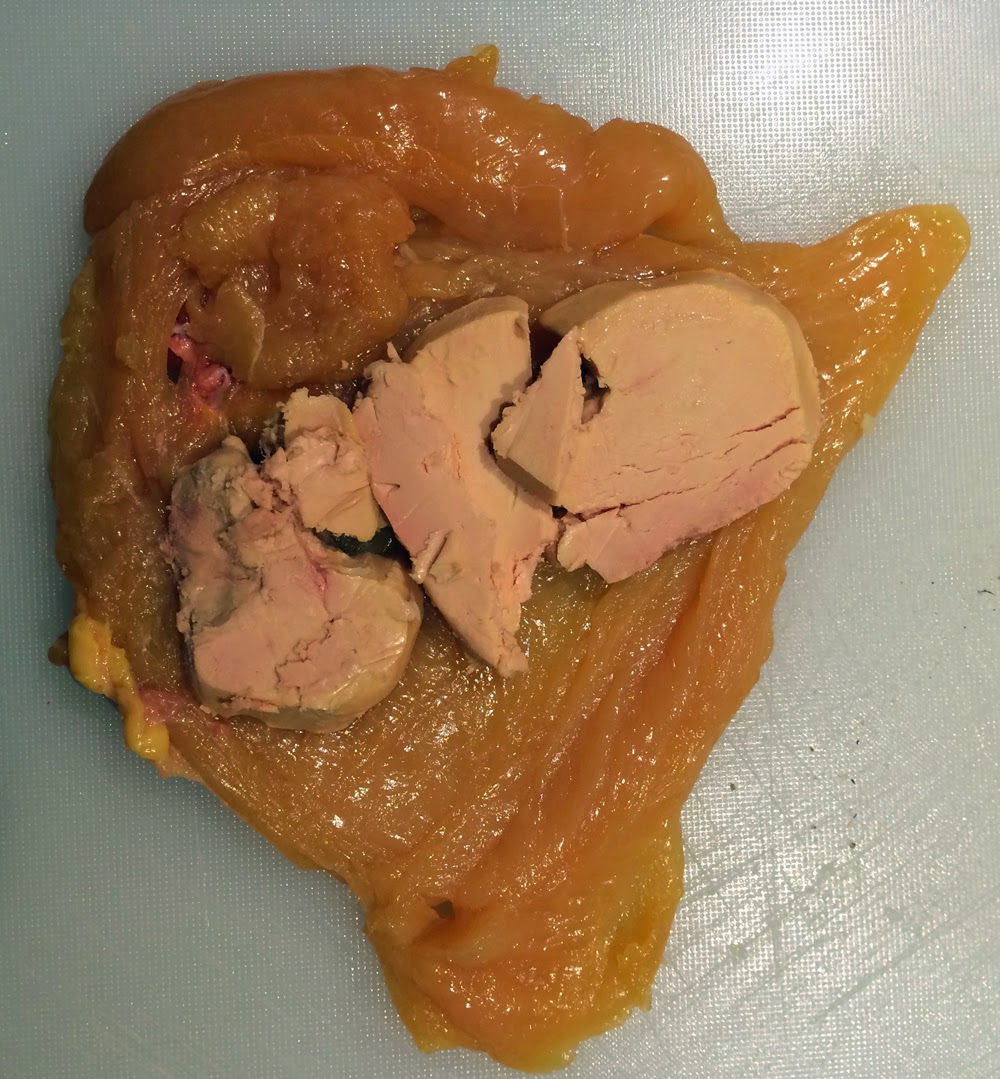 I sliced thick slabs of veinless pieces off its sides and stuffed this into chicken breast. 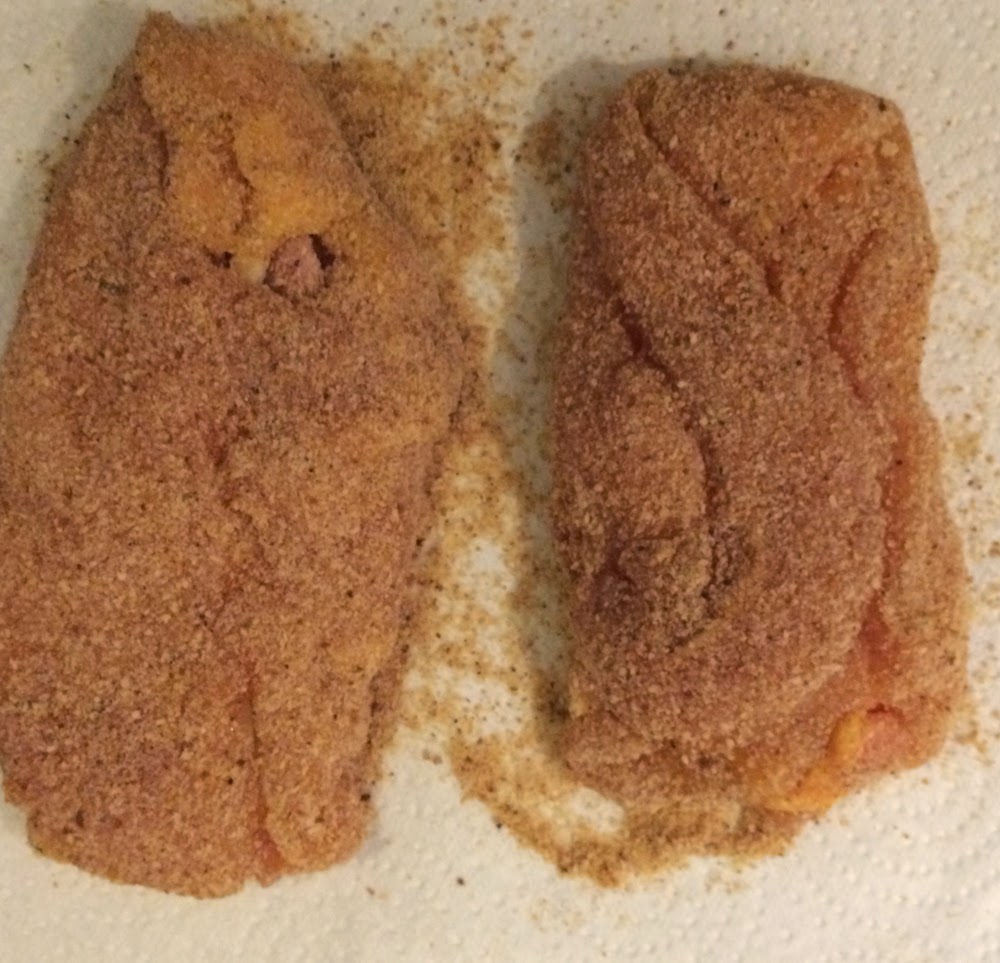 I seasoned some bread crumbs and lightly coated the breasts. 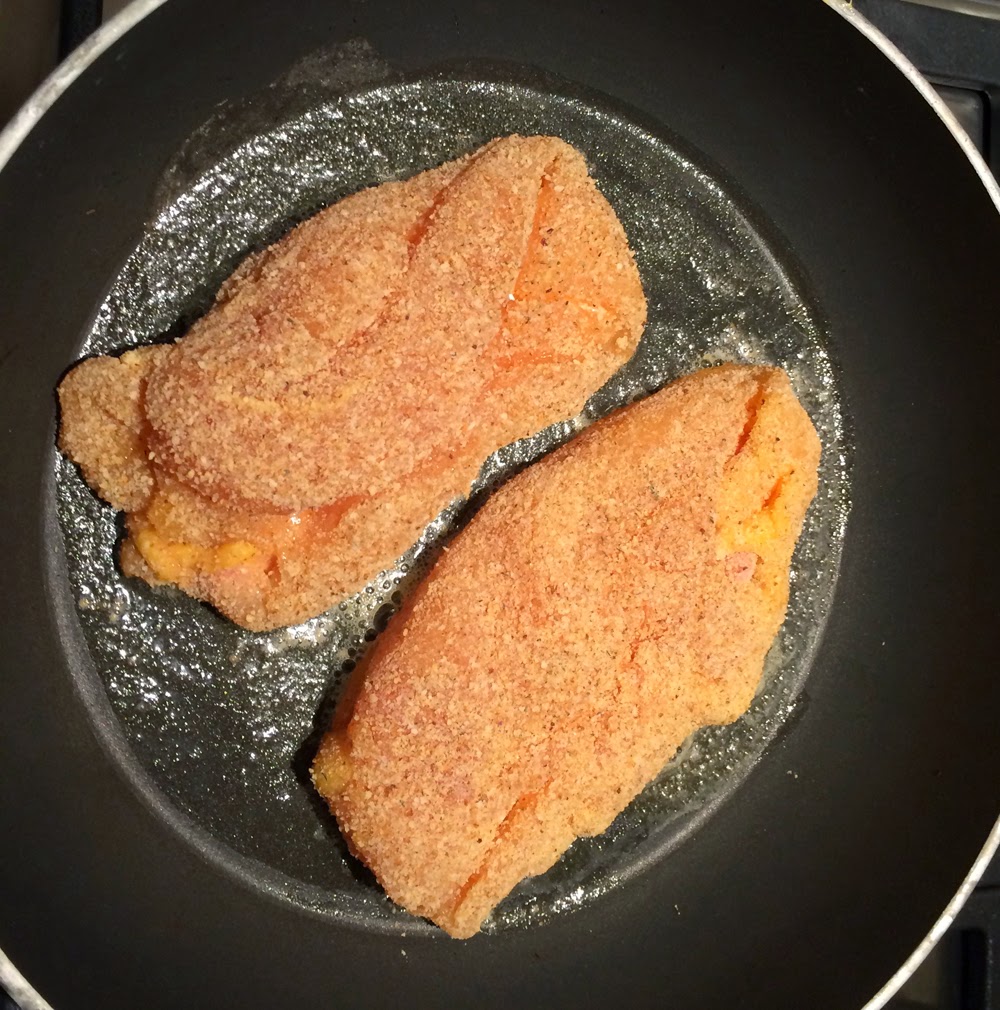 These were then slowly sautéed in butter and then the pan was covered for the chicken to finish cooking. 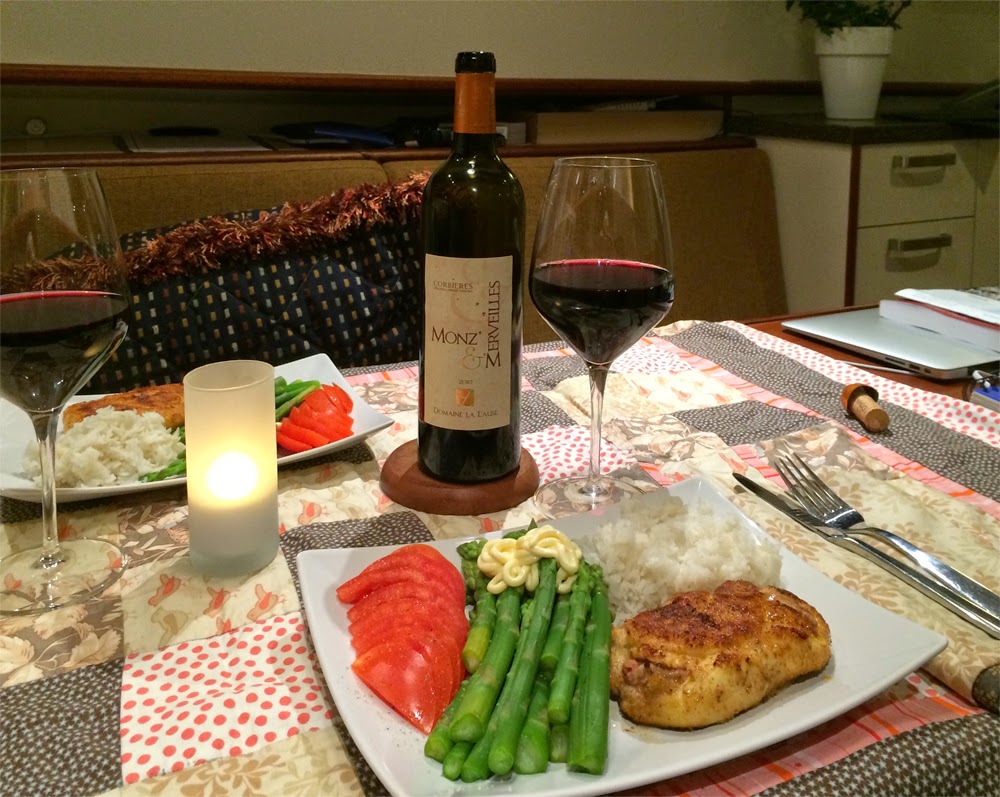 The resulting suprême de volaille de Bress au foie gras de canard was served with steamed asparagus spears with a mustard mayonnaise, basmati rice and sliced Roma tomatoes. It was accompanied superbly with a 2010 Monz’ & Marveilles Corbières from Domaine La Luze. We were slowly getting back into cruising. 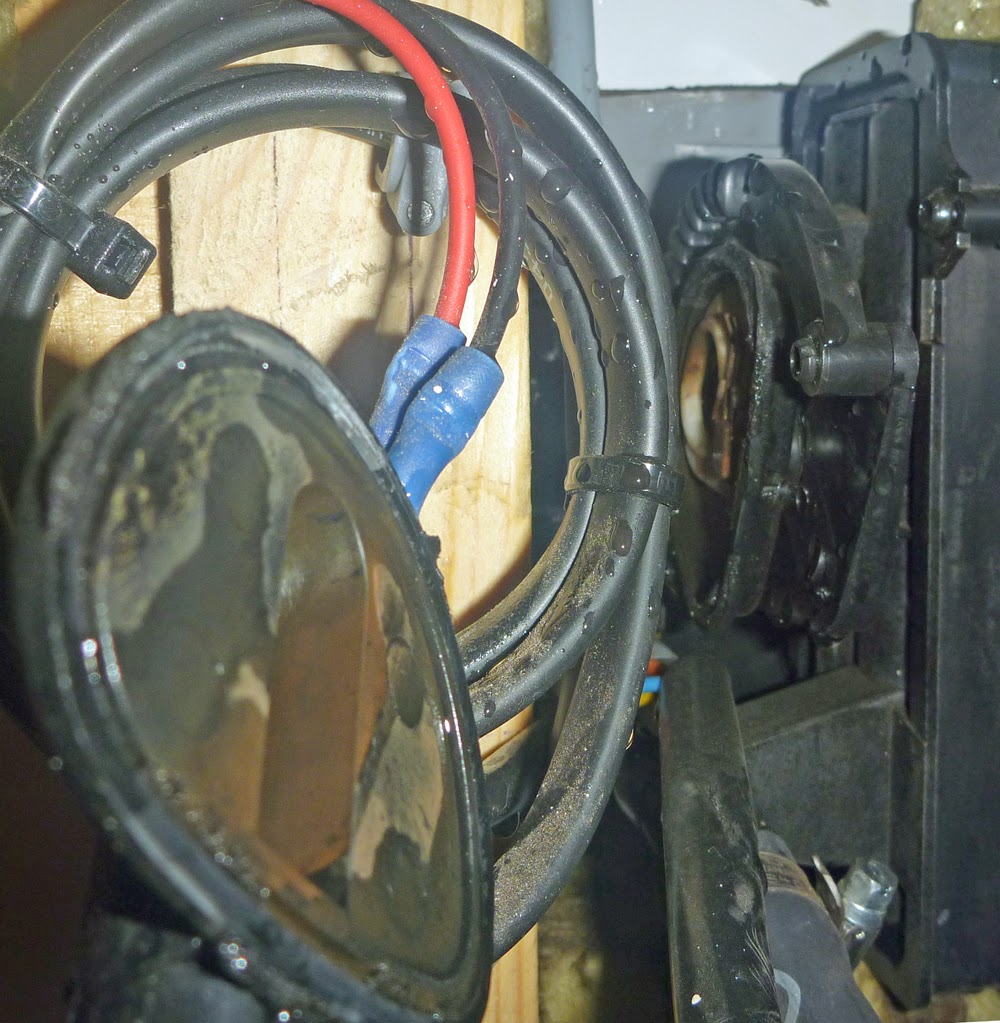 The glum weather persisted, with rainy spells, cool days and nights down in the 8º to 10º range. On Friday morning, about ten minutes after I had turned-up the central heating thermostat to warm the boat for breakfast, there was a loud bang and then a rapid running of the water pump. I quickly lunged to open the pump and furnace breakers, which brought quiet. Under the galley sink was steam and a growing pool of water. I removed the back panel and saw water flowing out of a dangling hose with a broken fitting on its end. 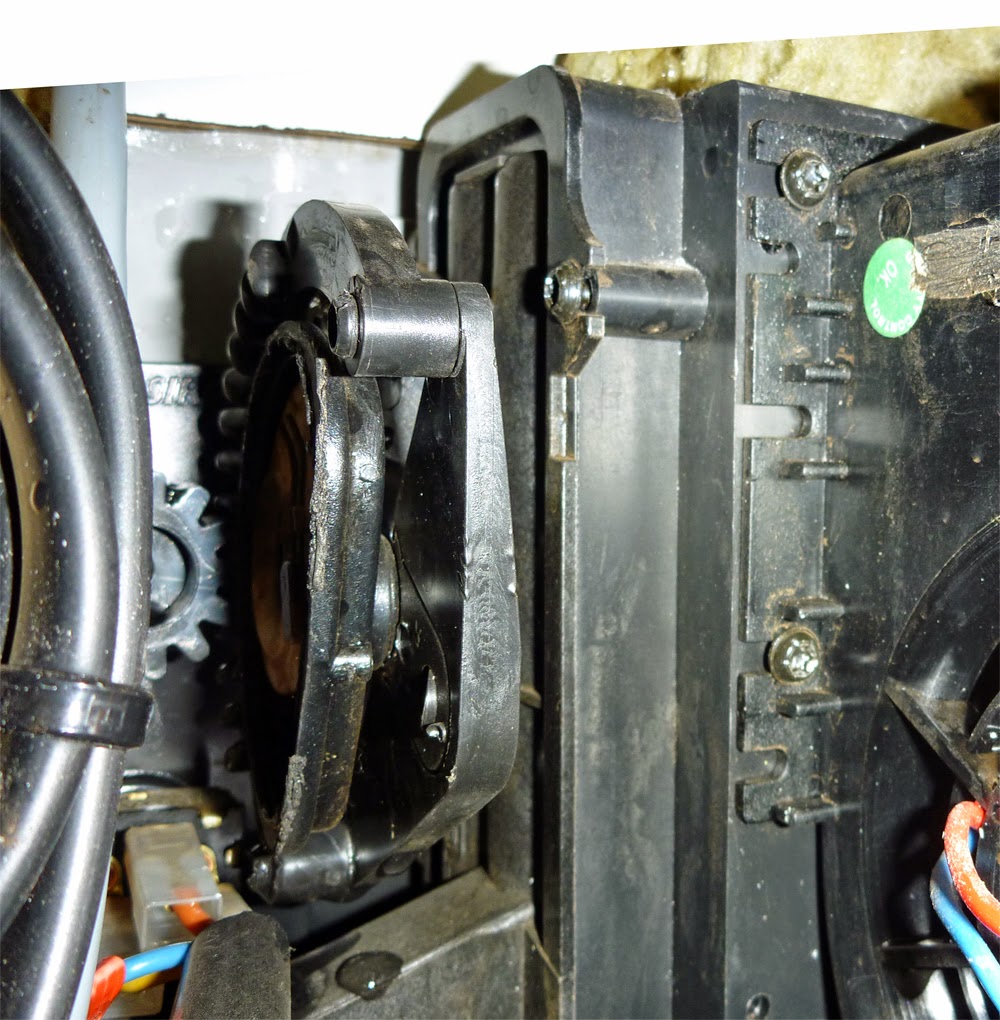 The fitting appeared to have blown off the side of the Webasto heater for the heads. 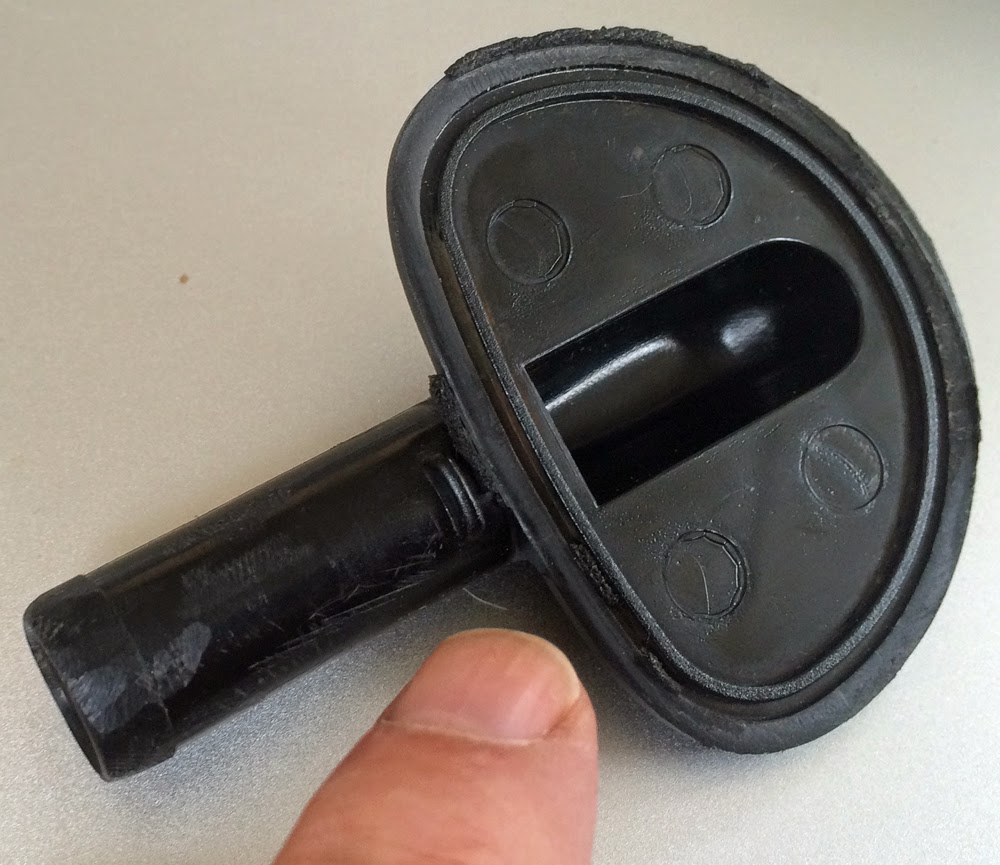 Looking to bypass the heater by connecting the line to its inlet with the line from its outlet, I unscrewed the clamp and took the broken fitting off the hose. The connecting barb showed gouges and scrapings from having been crudely modified, most likely by the installer trying to force the fitting into a cold hose, rather than heating the hose. Since everything in Zonder Zorg is new, I need to determine why a ten-month-old fitting blew. I suspect it had been overstressed and weakened while the installer whittled down the hose barb. 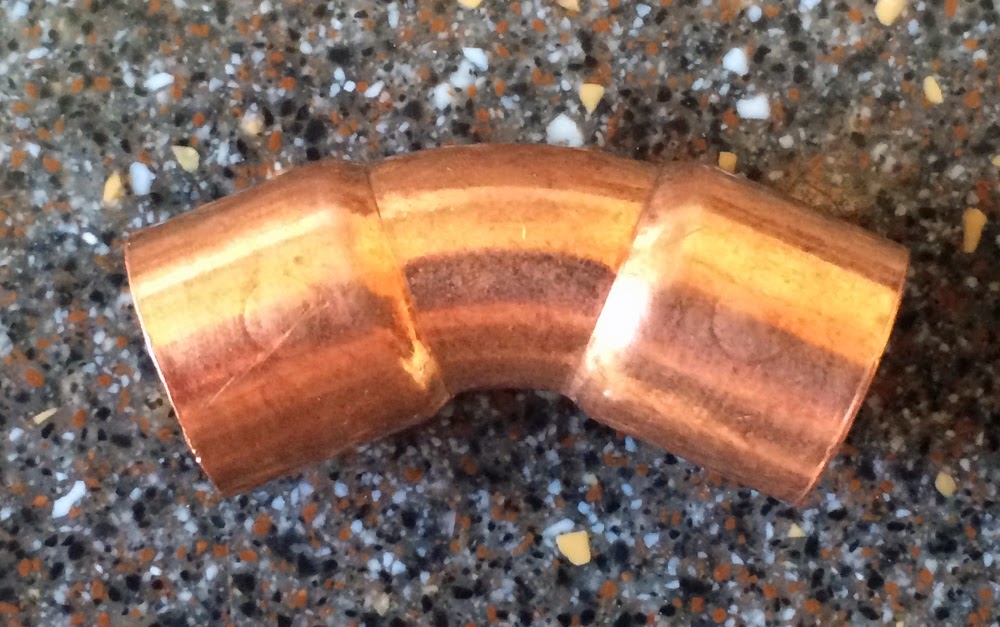 I walked through the rain to the Bricomarche that is in the rear of the Leclerc and searched for a piece to connect the two sections of hose. My best option seemed to be a 14 millimetre female-female copper solder junction. The straight junction had insufficient shoulder to hold the clamps, so I chose a 45º one. 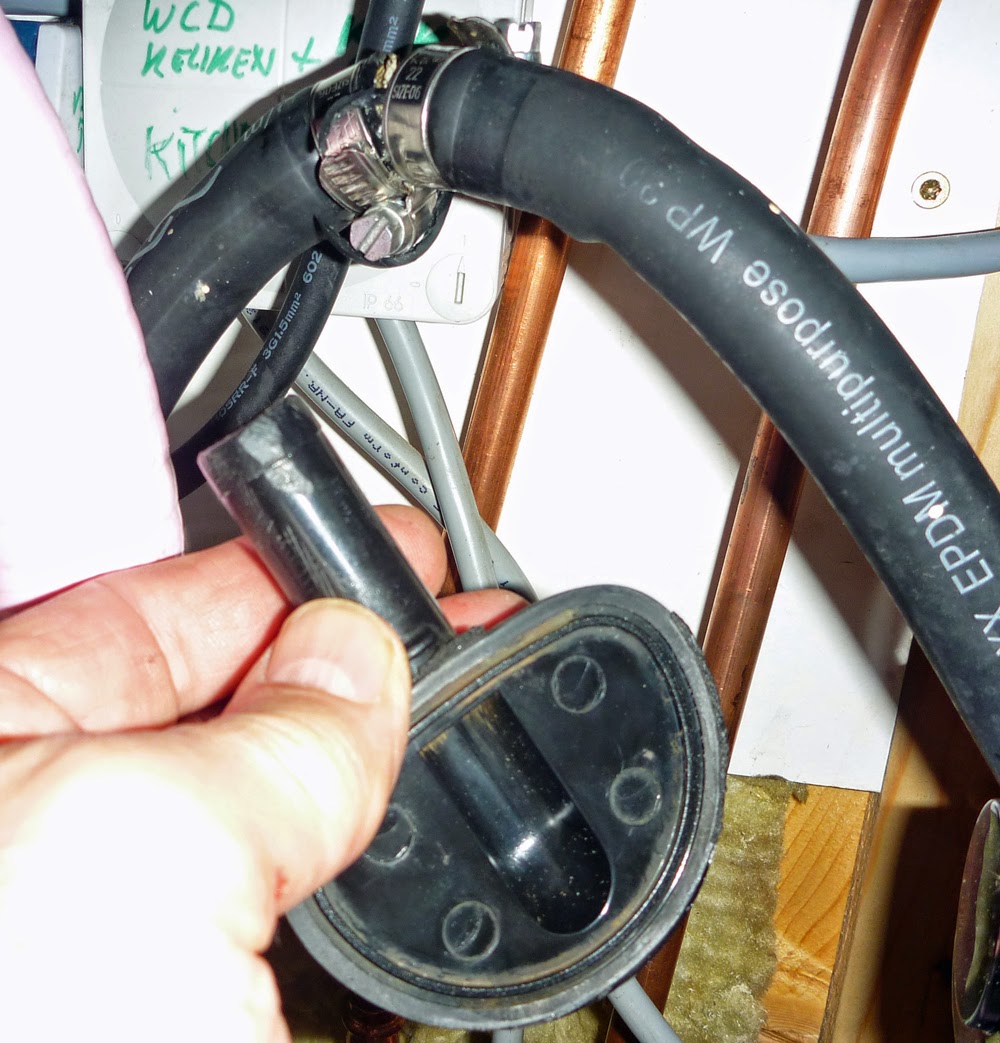 I slipped the hose ends over the elbow, tightened the clamps and switched on the water pump. The bypass held. I closed the breaker for the furnace and after the system was filled and purged, I monitored the repair for leaks as the furnace began again warming the cabin. We had breakfast. 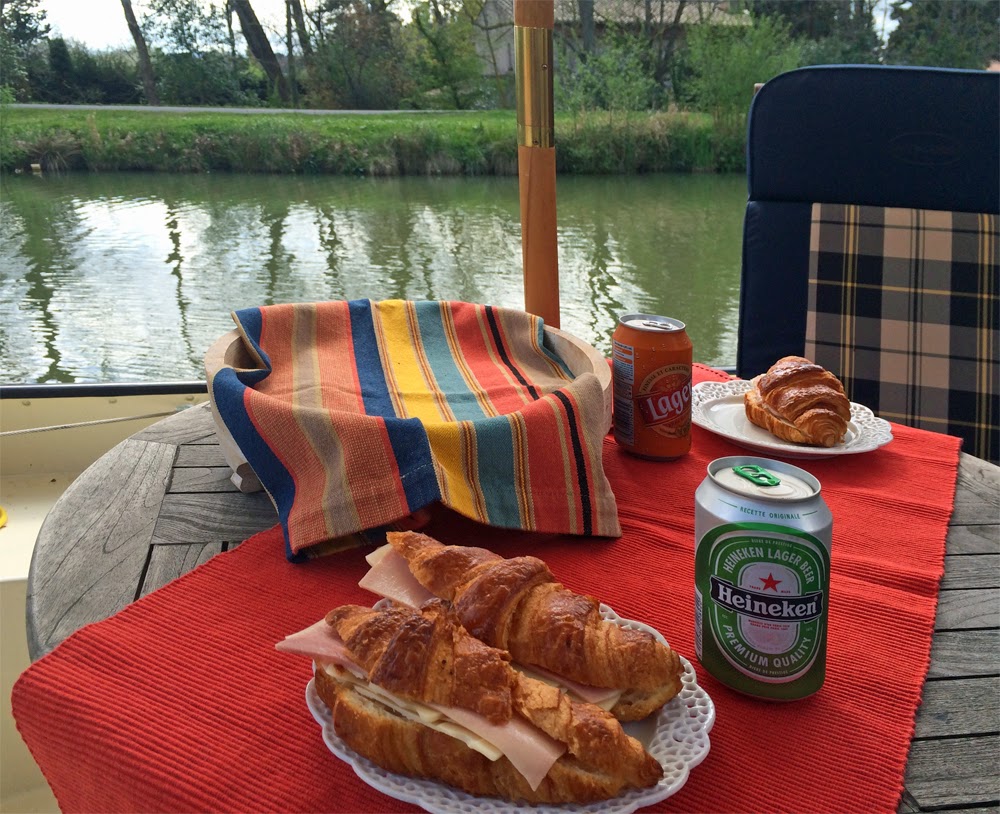 By Saturday morning the rain had stopped and the forecast for the following few days showed hope for an end to the prolonged glum. We continued to relax, and as the weather allowed, we spent more time out in the cockpit, relaxing and enjoying lunch. 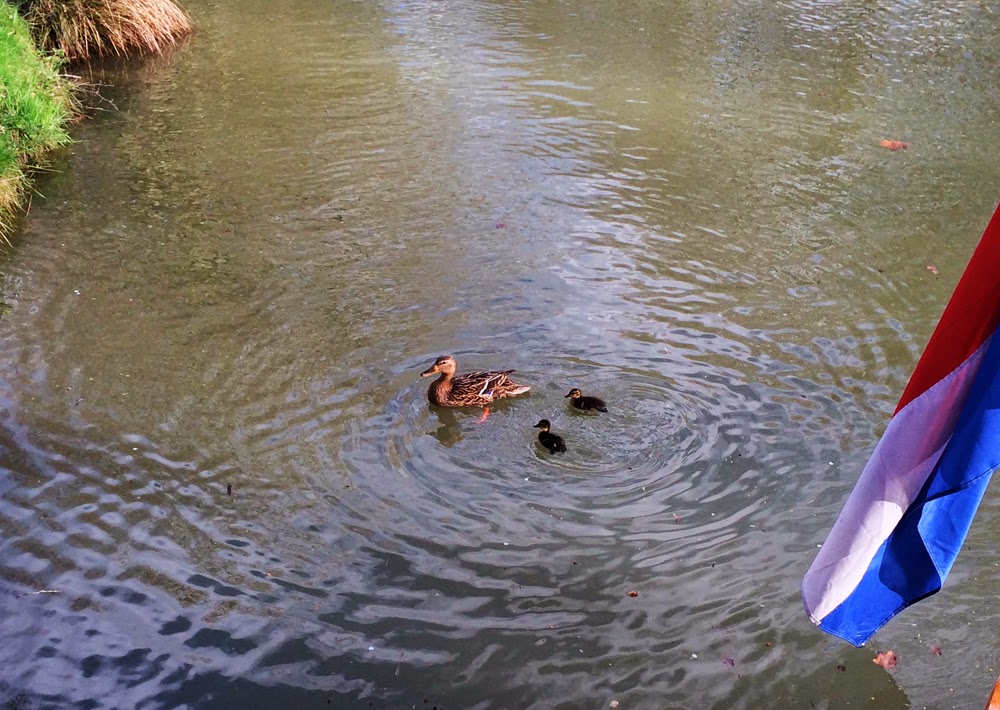 With the activity and the smell of food, we soon attracted some of the local ducks, including this mom teaching her young ducklings how to flirt with boaters and beg for crumbs. 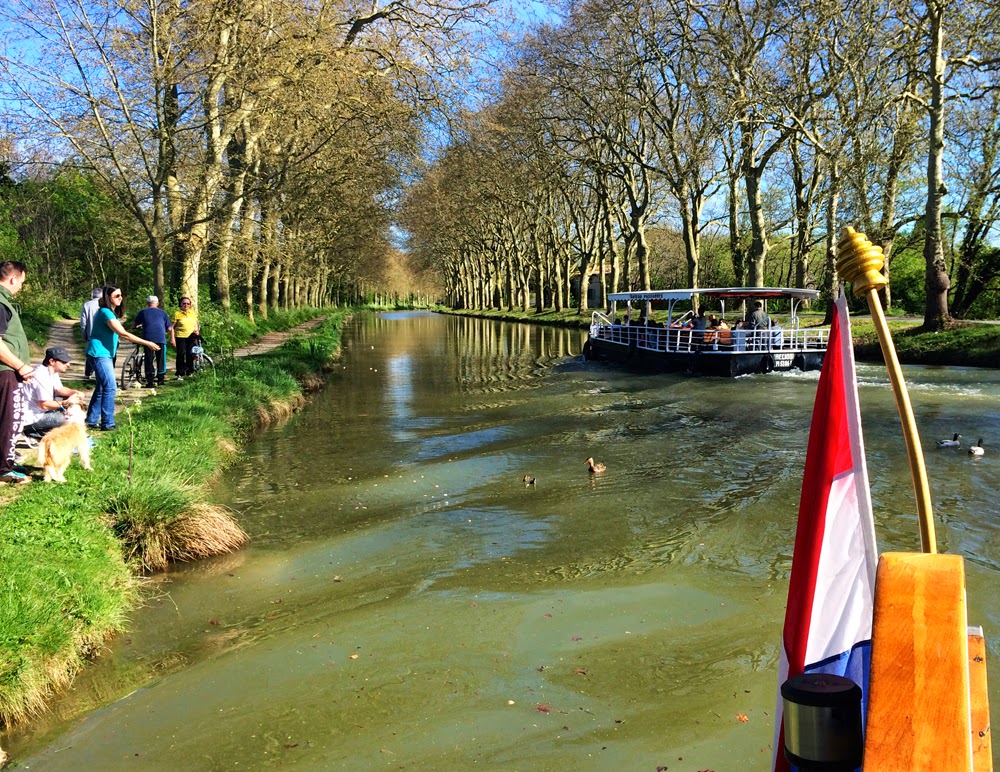 As the weather improved, there was an increase in the number of locals out walking along the towpath. Many of them had bags of leftover bread and they lined-up on the banks overfeeding the ducks as if they were producing foie gras.

Among other things to fill the time, on Sunday I prepared the remainder of the large foie gras that I had bought. I started by deveining the liver, seasoning it and pressing it into three small terrines. These were placed in a bain-marie and then into a 150º oven for half an hour. Out of the oven, they were allowed to stand for two hours before being placed in the fridge for three days to resolve. 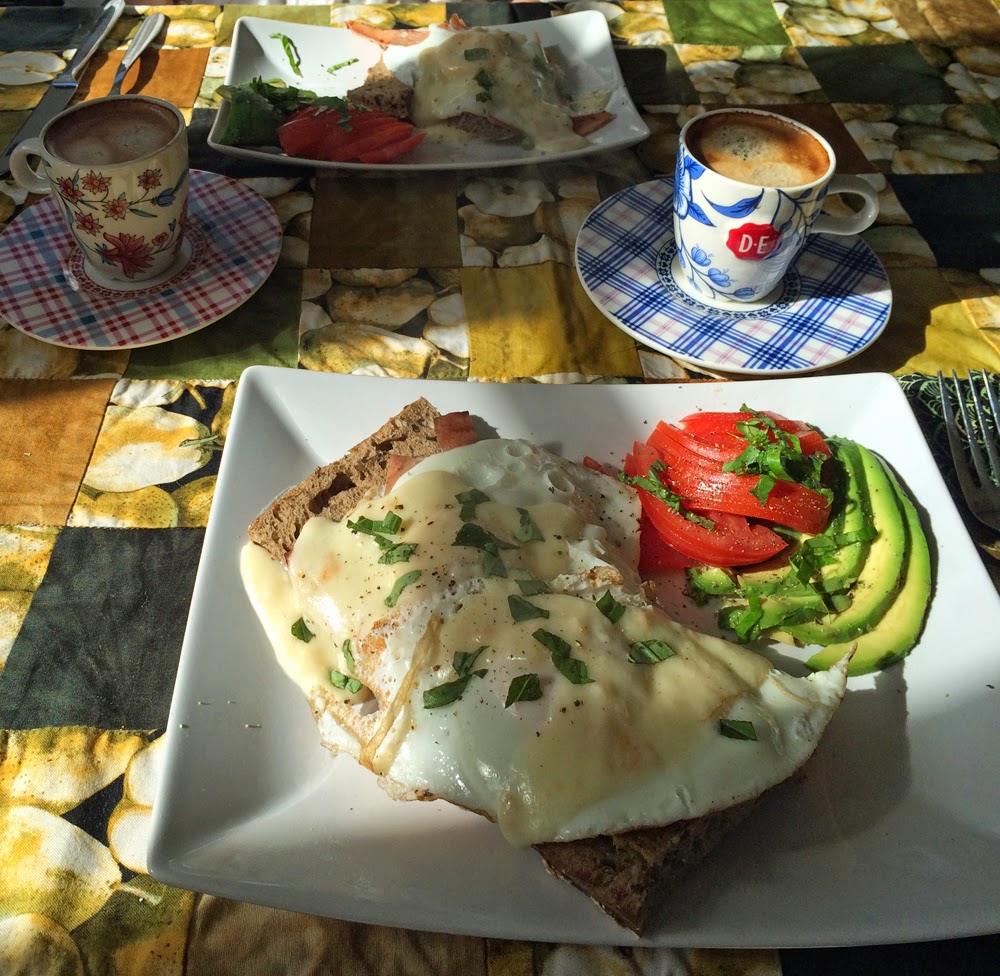 Monday morning dawned clear and after some preliminary espressos inside, it was pleasant enough to continue with breakfast in the cockpit. Edi prepared a Zonder Zorg version of eggs Benedict: she basted eggs and served them napped with freshly made sauce Béchamel on ham slices on lightly toasted multigrain bread and garnished with avocado and tomato slices and fresh basil and served with more cups of espresso. 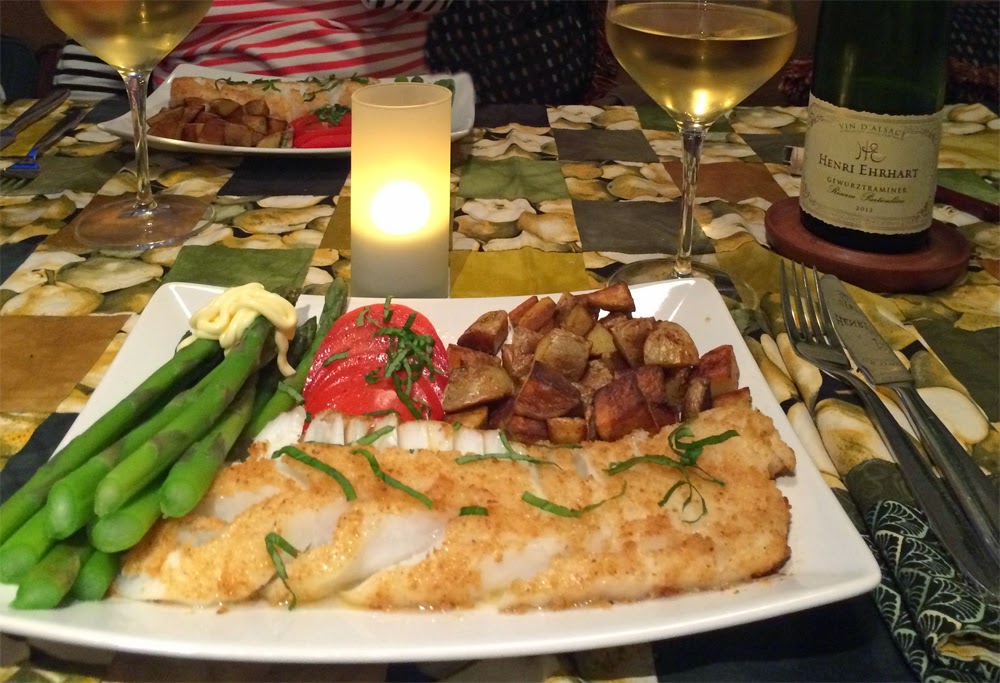 The selection of fresh seafood in the Leclerc is superb, and we have been spoiling ourselves with fish for dinner most evenings. On Monday there was a special on dos de cabillaud, so I bought a large piece, which I lightly breaded, seasoned and sautéed in butter and served with pomme de terre rissolées and steamed asparagus spears with a mustard mayonnaise. 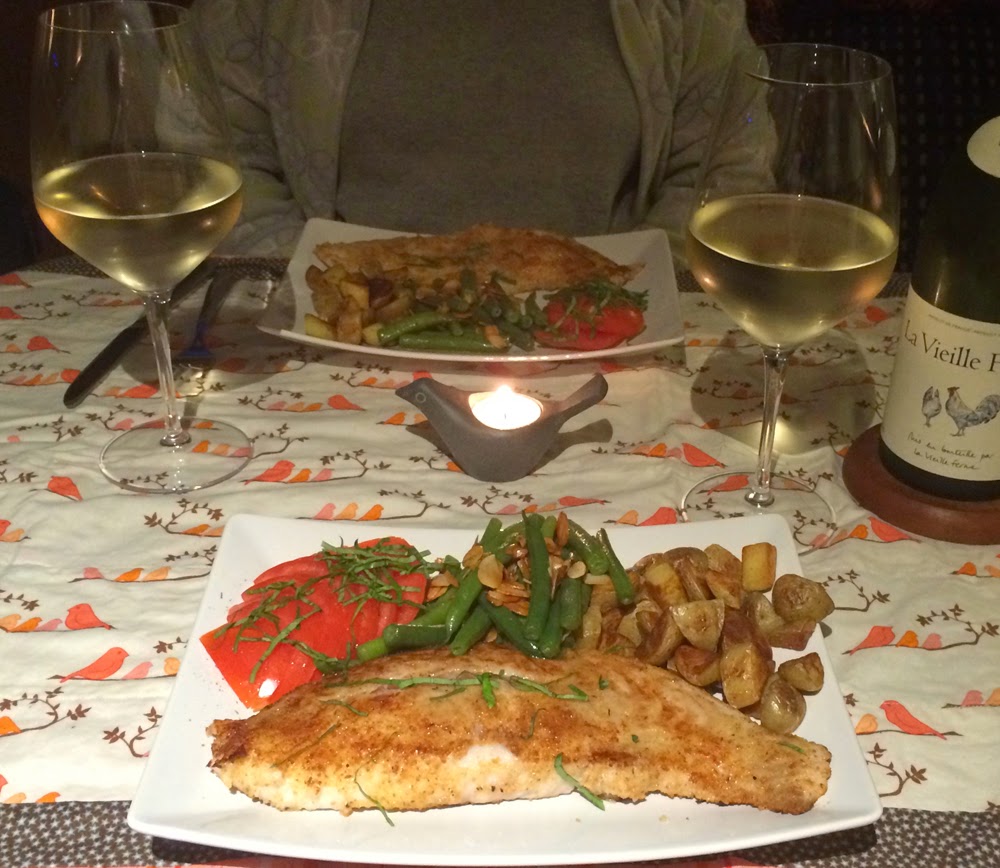 The weather had stabilised, so on Tuesday afternoon we made one last shopping expedition to Leclerc to stock our fridge and pantry in preparation for continuing up the canal on Wednesday morning. In the evening we enjoyed filet de perche lightly breaded and sautéed and served with green beans almandine, rissolées and sliced tomatoes with shredded basil.

We were comfortably back aboard Zonder Zorg, all her systems were working, we had recovered from ten days of eating American cruise ship style and had reacquainted our systems to proper food. We were ready to continue.
Posted by Zonder Zorg at 05:00