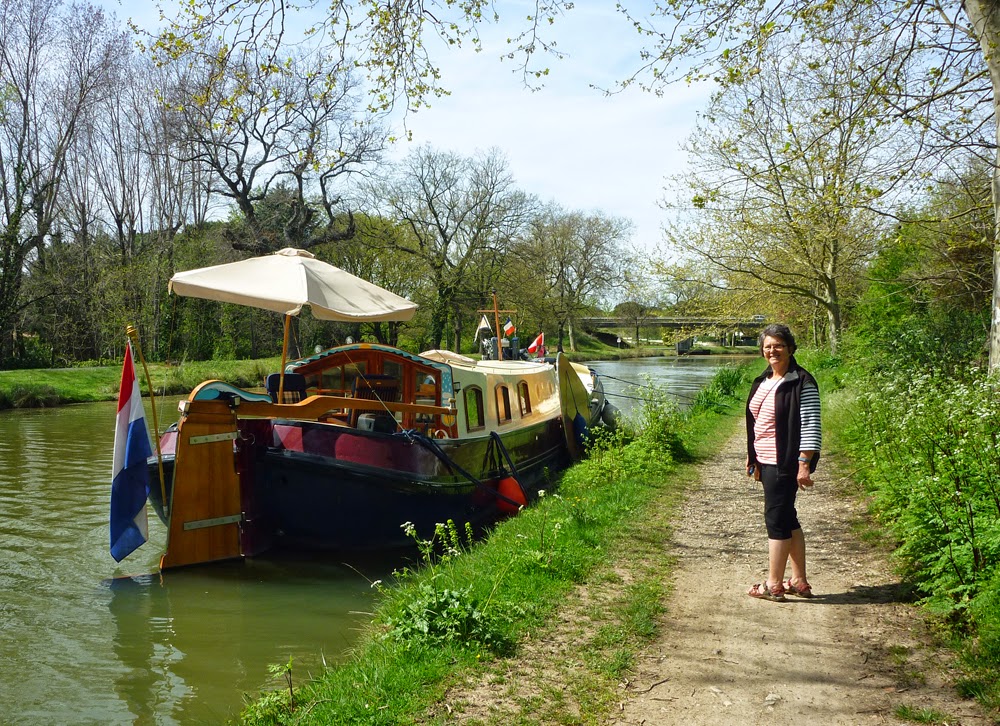 We had spent a week moored in a quiet rural area just 2.3 kilometres from our winter moorage in the Bassin de Carcassonne. During our many years of cruising, we have often found it useful at the beginning of a voyage to leave, go a few nautical miles or kilometres and then pause to finish departure preparations. The farewells are done and the distractions of “home” are left behind. 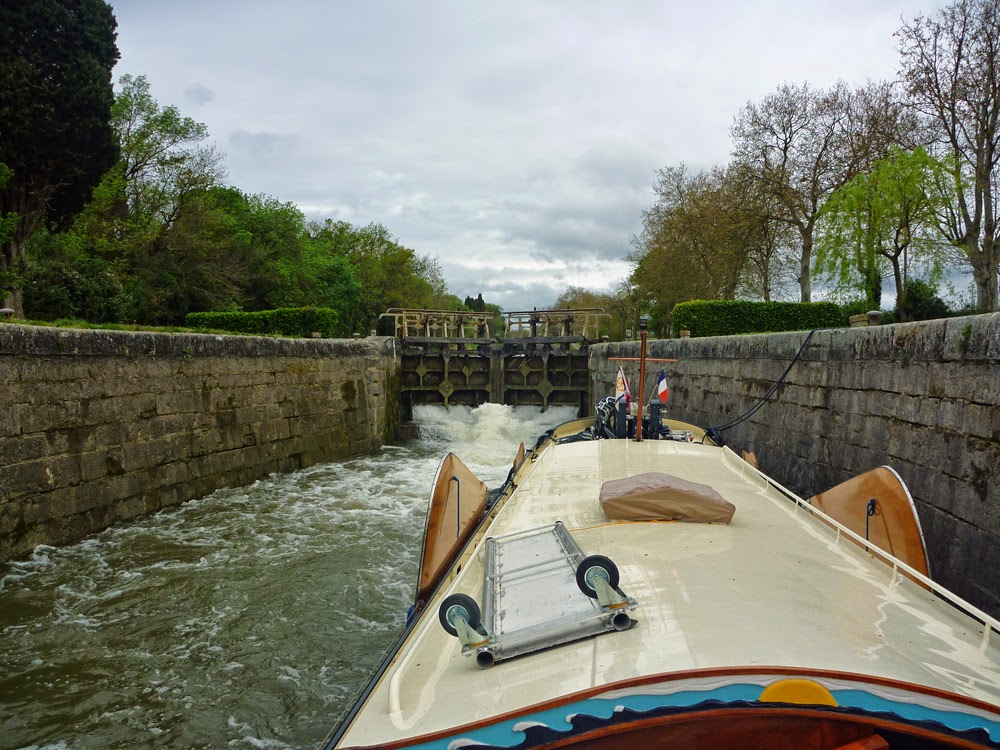 Having finished our preparations, at 0840 on Wednesday the 8th of April we recovered the mooring pin from the bank, raised the spud pole and continued up canal. Twenty minutes later we were in Écluse la Douce, our first lock of the year. We had to reacquaint ourselves with the routine of working our way up an ovoid Midi lock. Half an hour later we were in Écluse Herminis, our second lock of the season to reinforce the lessons. 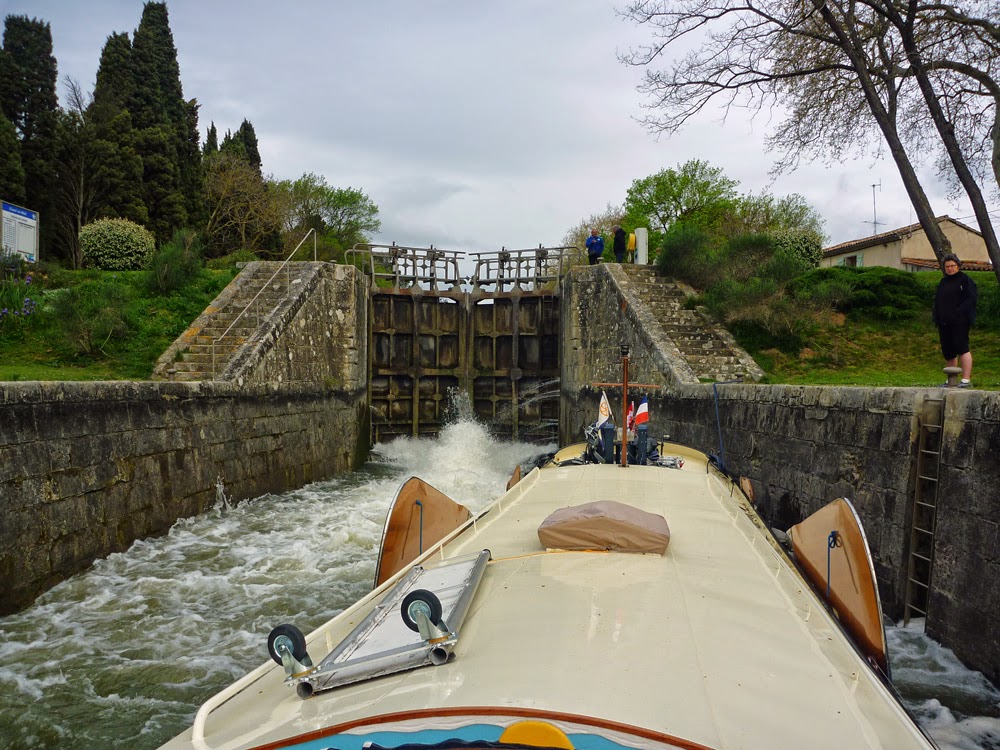 Just 315 metres beyond Herminis we came to the double lock, Écluse Lalande, by which time we were fully retrained. The process we use is to drop Edi off on the landing quai just short of the lock. She walks up to the bollard at entrance to the lock to receive the stern line that I toss up as I slow Zonder Zorg in the chamber. She loops the bollard and drops me the end of line, which I snub around the stern cleat to stop the barge. Then I shift the engine into ahead and walk forward as the spring slowly moves the bow to alongside the chamber wall. I toss the bow line to Edi for her to turn around the bollard and tail as the lock fills. I head back to the cockpit, shift the engine to neutral, shut it down and tail the stern line as we rise. 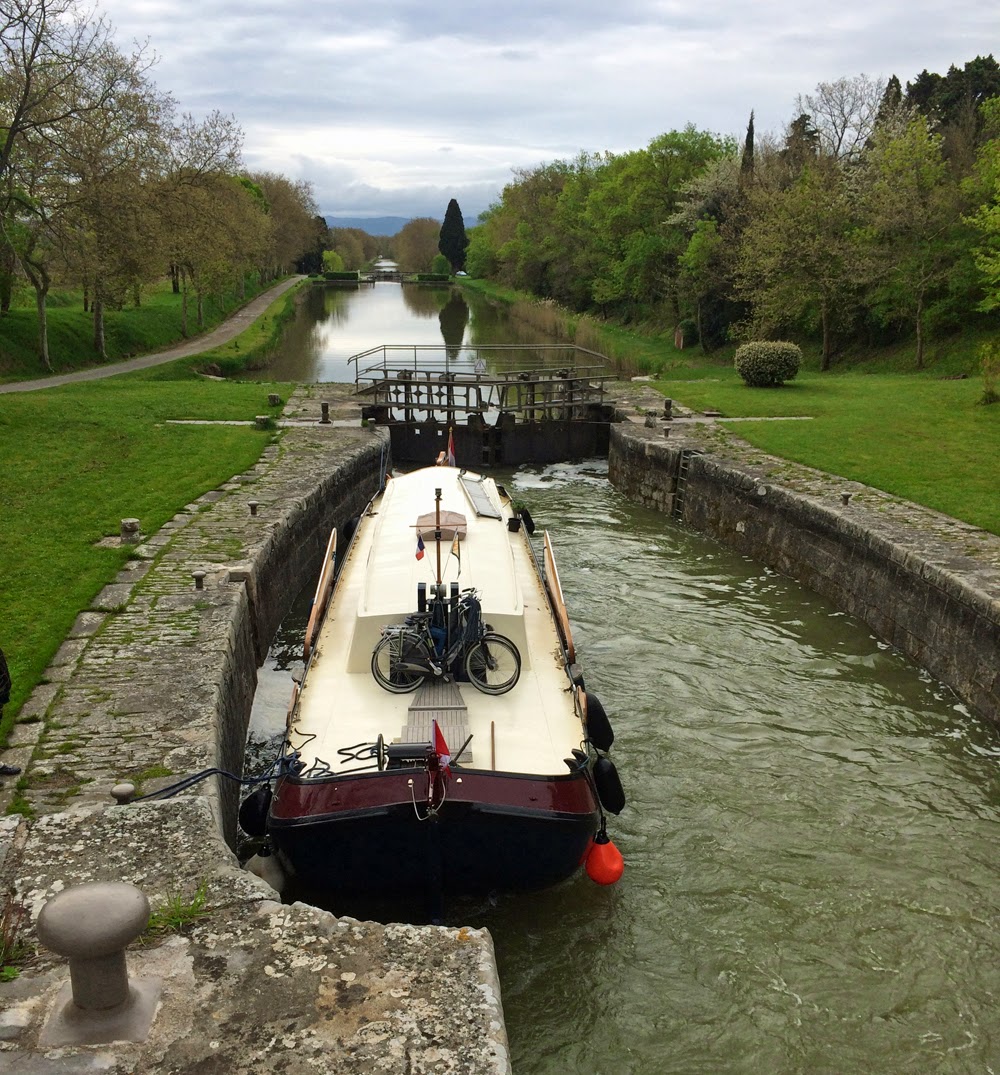 With multiple locks, Edi takes the stern line and walks it along as I motor the barge to the next chamber, where we repeat the process. During the last 50 or 60 centimetres of the rise, the turbulence of the incoming water has diminished and the lines need much less attention, allowing me the freedom to wander around and shoot some photos. 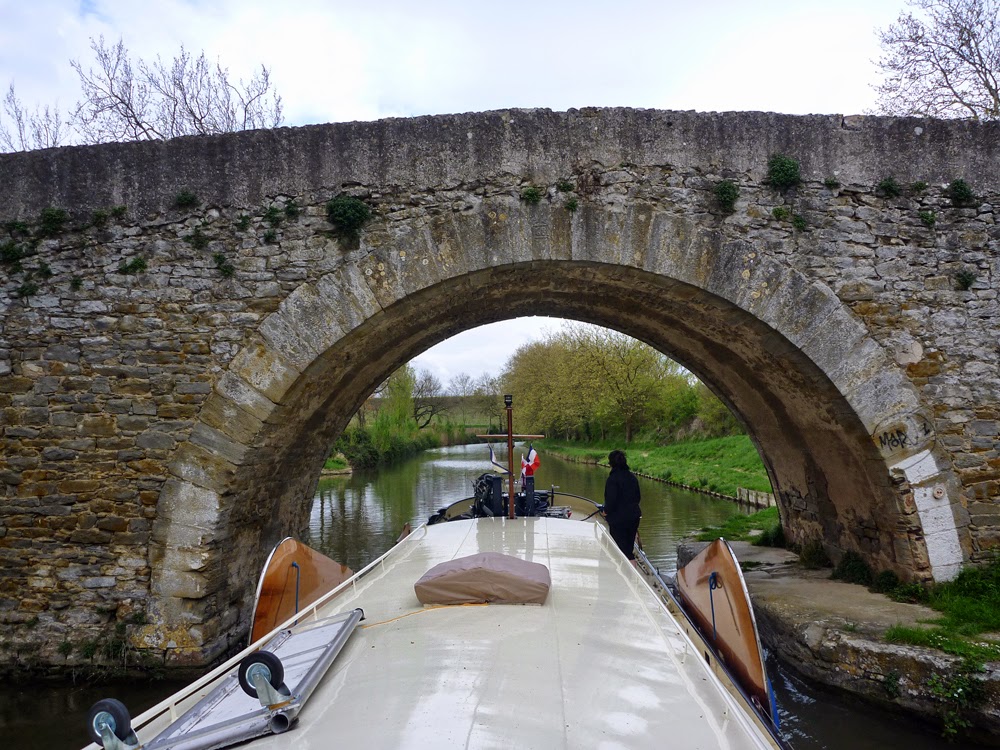 After leaving the double lock we passed under more of the old stone arch bridges that were built in the 1660s and 1670s. We are amazed that so many of these have survived for nearly three and a half centuries. 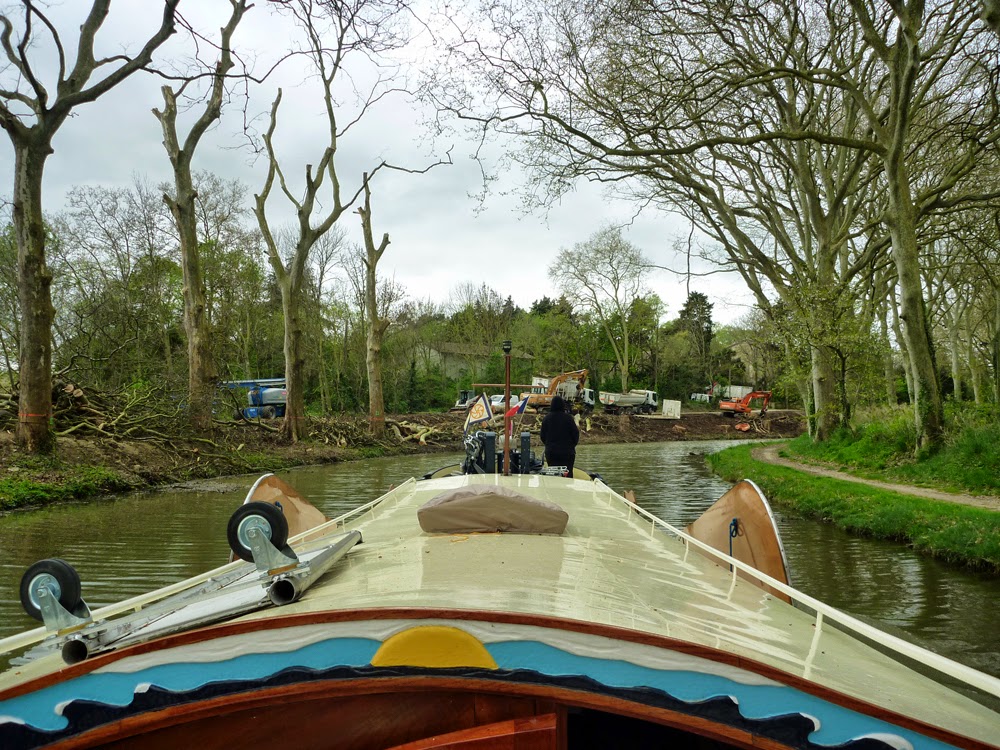 What have not survived are the plane trees along the canal banks. We passed an area where many that have been stricken by the canker stain fungus were being removed. The works had churned-up the bottom of the canal, and as we passed through the disturbed water, our engine’s raw water strainer clogged and we lost cooling water flow. There is a subtle sound change when this happens, which comes from the loss of exhaust cooling. At 1140 we pulled over to the canal bank to clean the strainer, and since we were stopped, we decided to remain there for lunch, knowing that we wouldn’t be able to make it to Écluse Béteille before it closed for lunch at 1230. 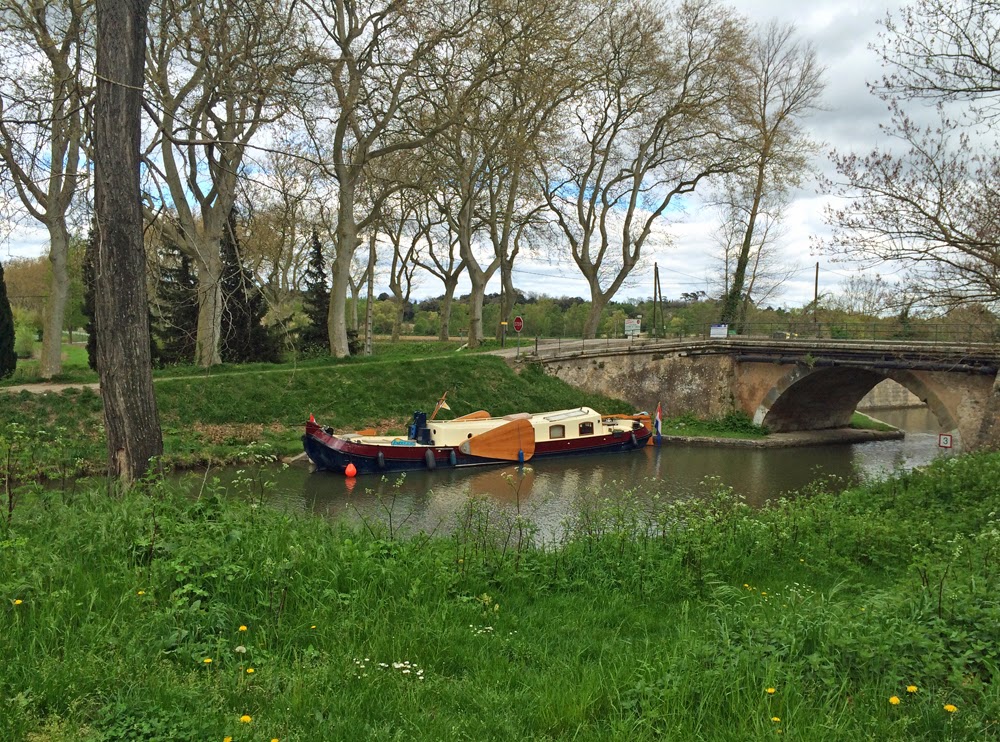 We timed our departure from our lunch stop to have us at the lock as it opened at 1330. Another five kilometres beyond Écluse Béteille we arrived in Bram and rafted onto a pair of Nichols rental boats; bow on one and stern on another. The port was full to overflowing with rental boats; the season was just beginning and very few had been rented thus far. We filled our water tanks from the rental base hose bib and then continued the hundred metres through the bridge hole where at 1550 we moored for the day on the abutment extension, using the spud pole and the stern line around a pin in the bank. We had come 21.5 kilometres and had passed through six locks. 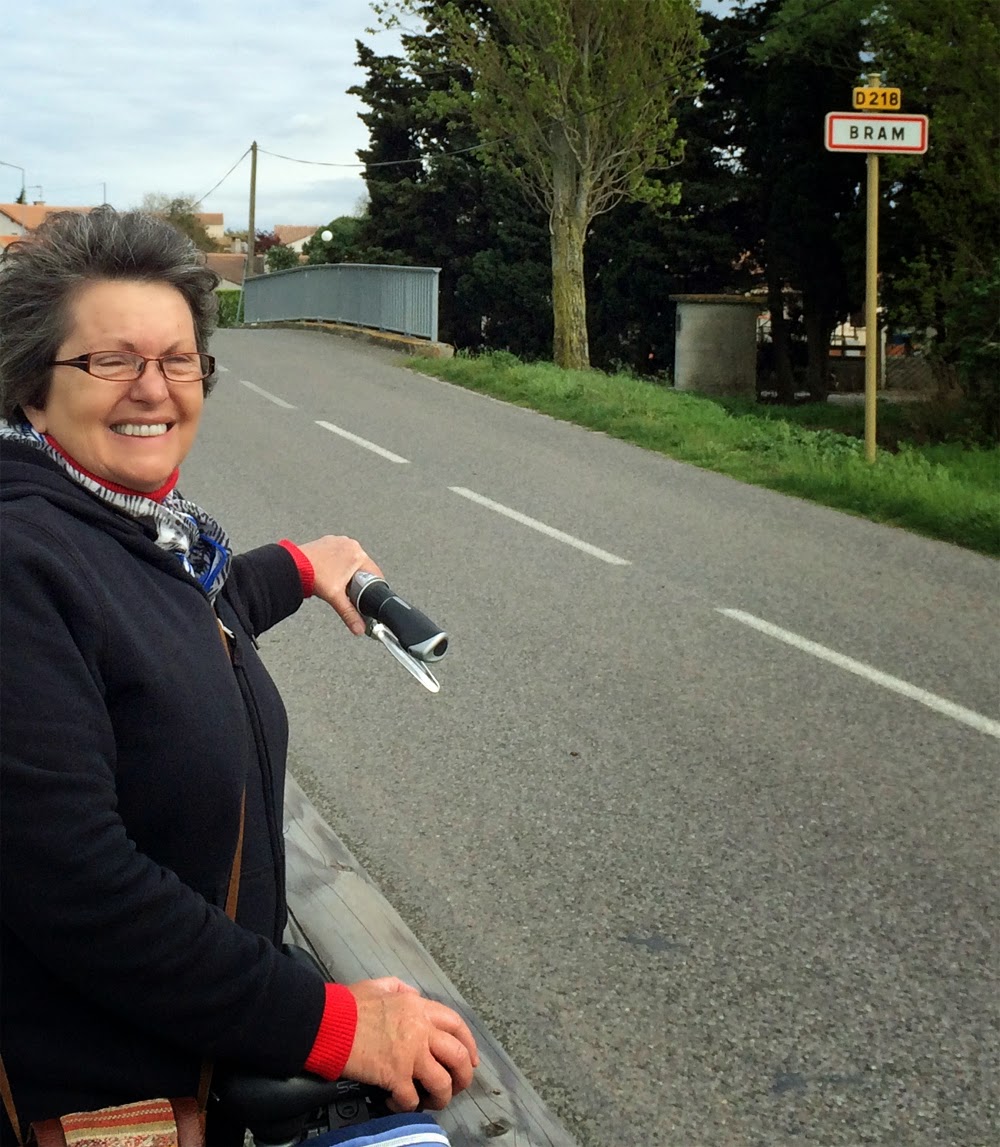 We offloaded the bicycles and pedalled into the town of Bram and out the other side to the supermarket. Along the way we passed an asparagus farm advertising fresh asparagus at €5 per kilo. The local season was just beginning. 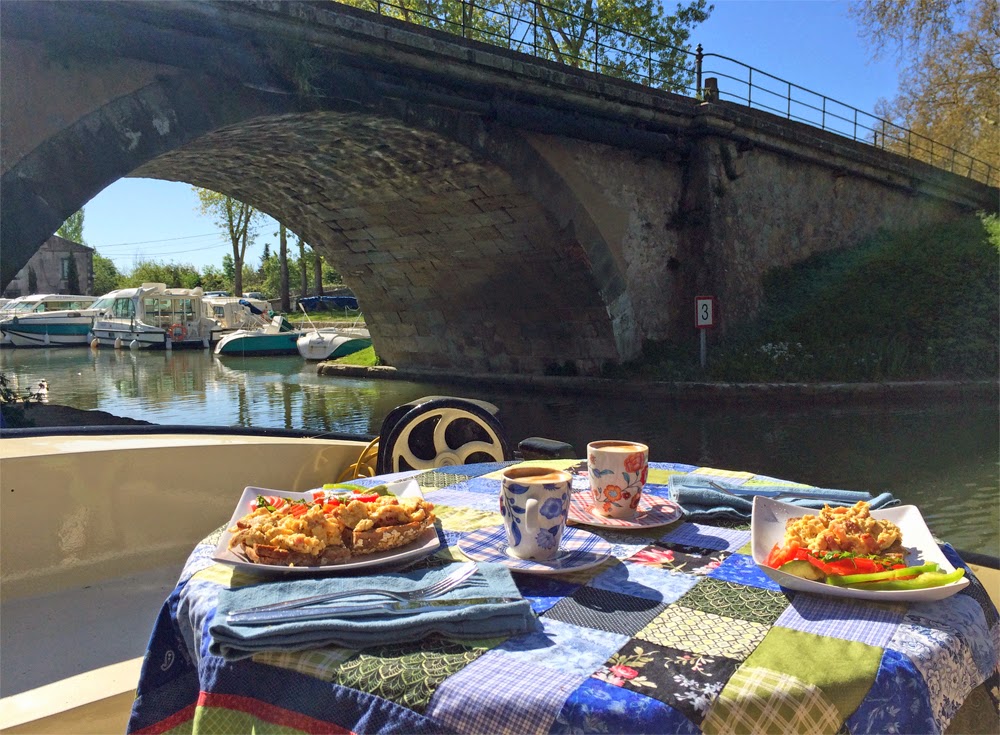 Wednesday we had a late breakfast in the cockpit and shortly after noon we raised the spud pole, hauled the pin and continued up canal. 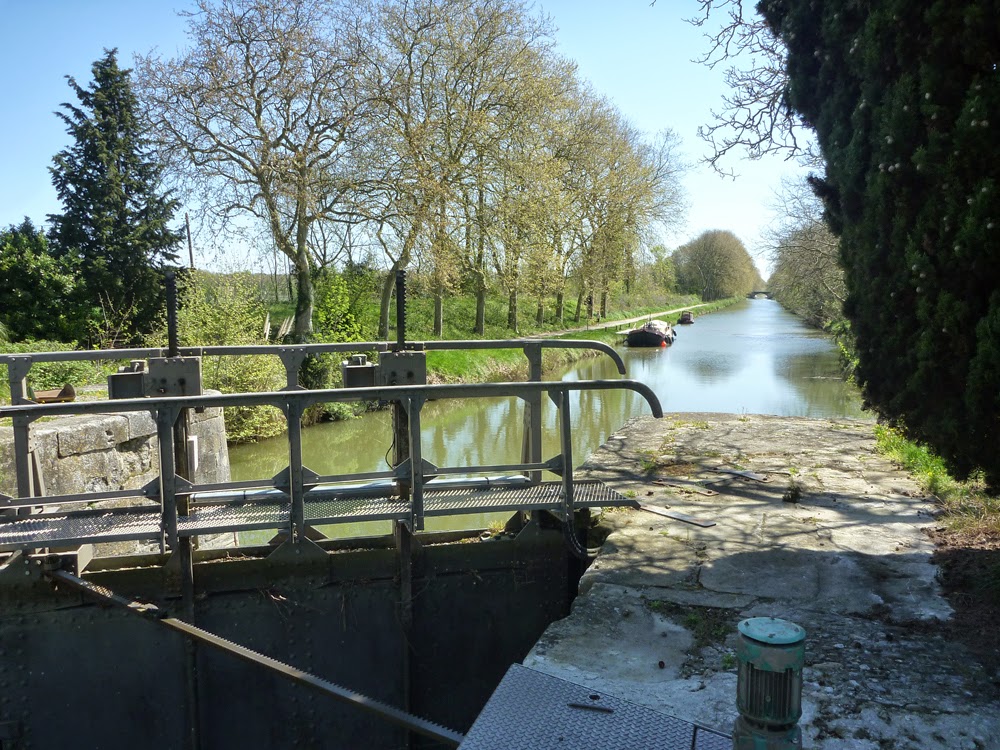 We arrived at Écluse de Bram at 1223 to find it closed for lunch ahead of schedule. Because we had quite recently finished breakfast, we could not spend the waiting time eating, so after we had secured to the small quai, we went exploring the area. 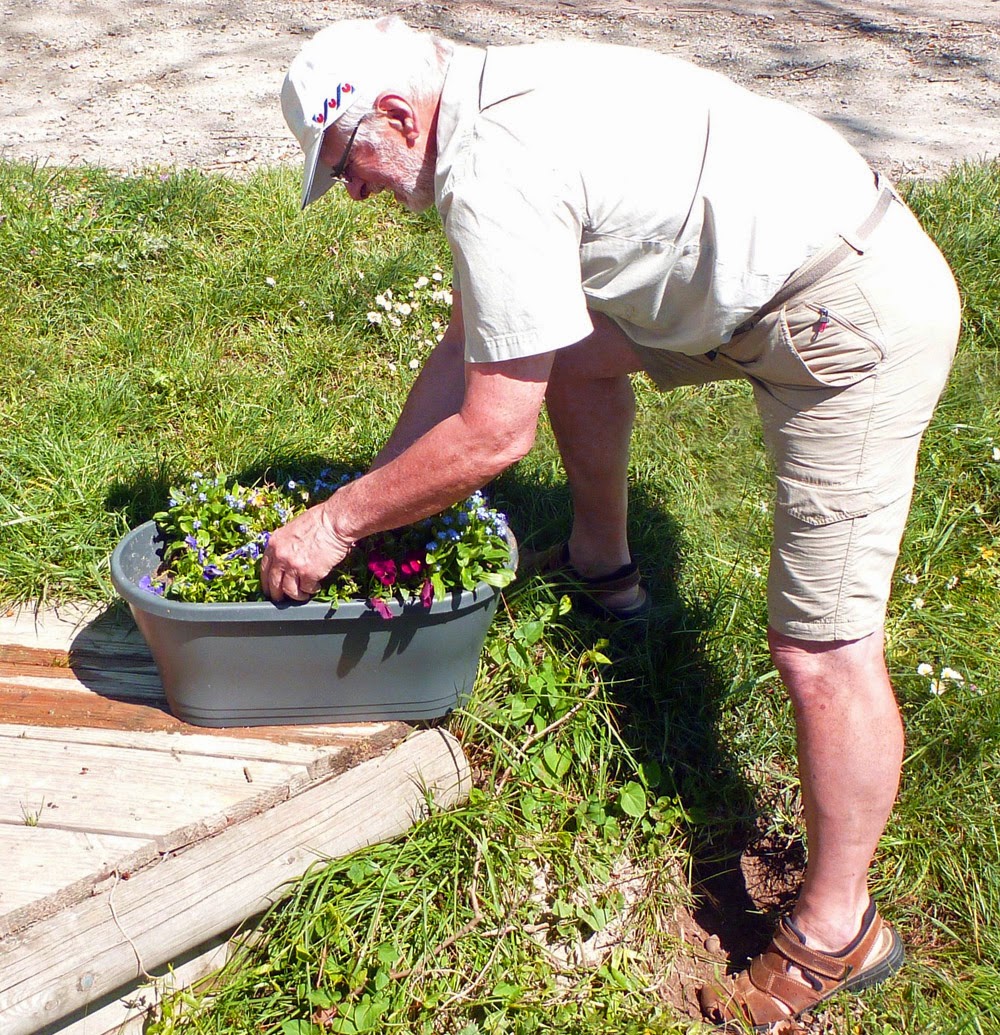 To occupy the remainder of the time, we harvested gravel and topsoil from the canal bank to use in bedding pots of flowers into our gunwale planter. The lock keeper returned from his 1230 to 1330 lunch at 1339, so using French logic, since he was nine minutes late we assumed he must have begun nine minutes early. 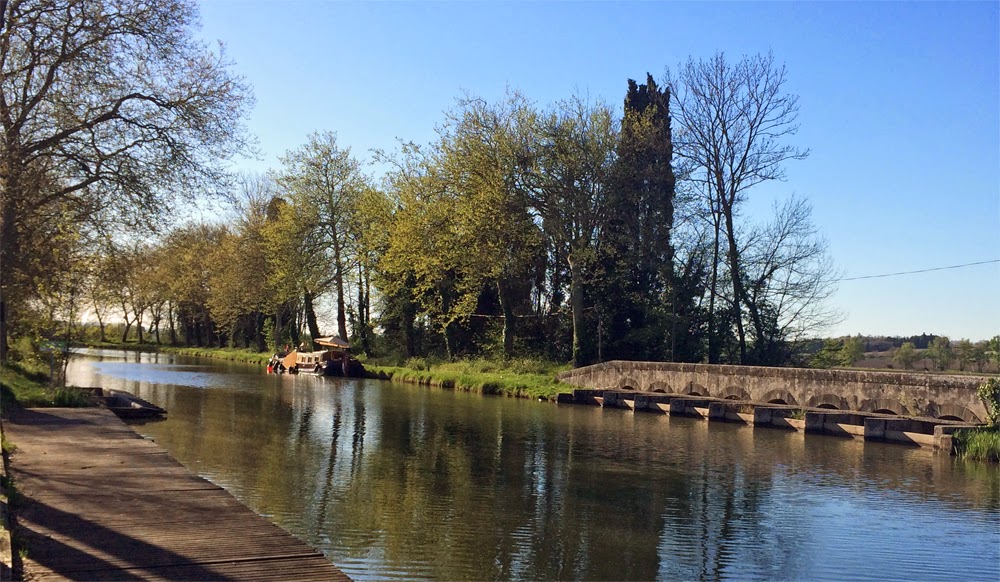 We continued through the lock and through two more before securing at 1455 with the spud pole forward and a stern line to a pin on the bank in a peaceful wilderness setting just upstream of l’Épanchoir de Villepinte. An épanchoir is an overflow to drain excess water from the canal, and many of these were designed into the canal when it was built. This one has an elegant eight arch bridge on which the towpath crosses the spillway. 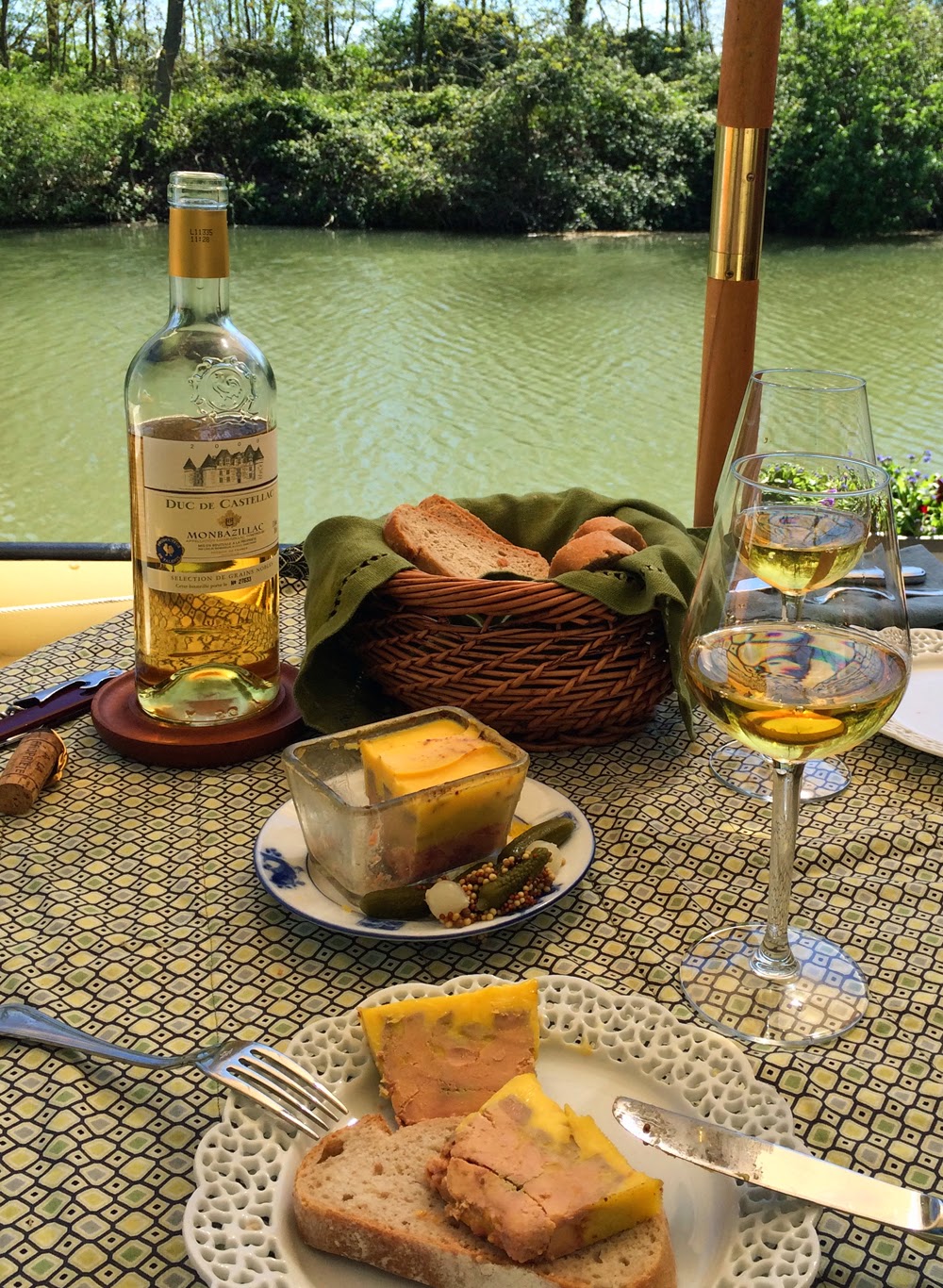 After settling-in, we enjoyed a mid-afternoon lunch in the cockpit, centred on one of the terrines of foie gras I had prepared a few days previously. It paired splendidly with glasses of Duc de Castellac 2009 Monbazillac. I made a note to myself to add a few grinds more pepper and a splash more Armagnac in the next terrines. 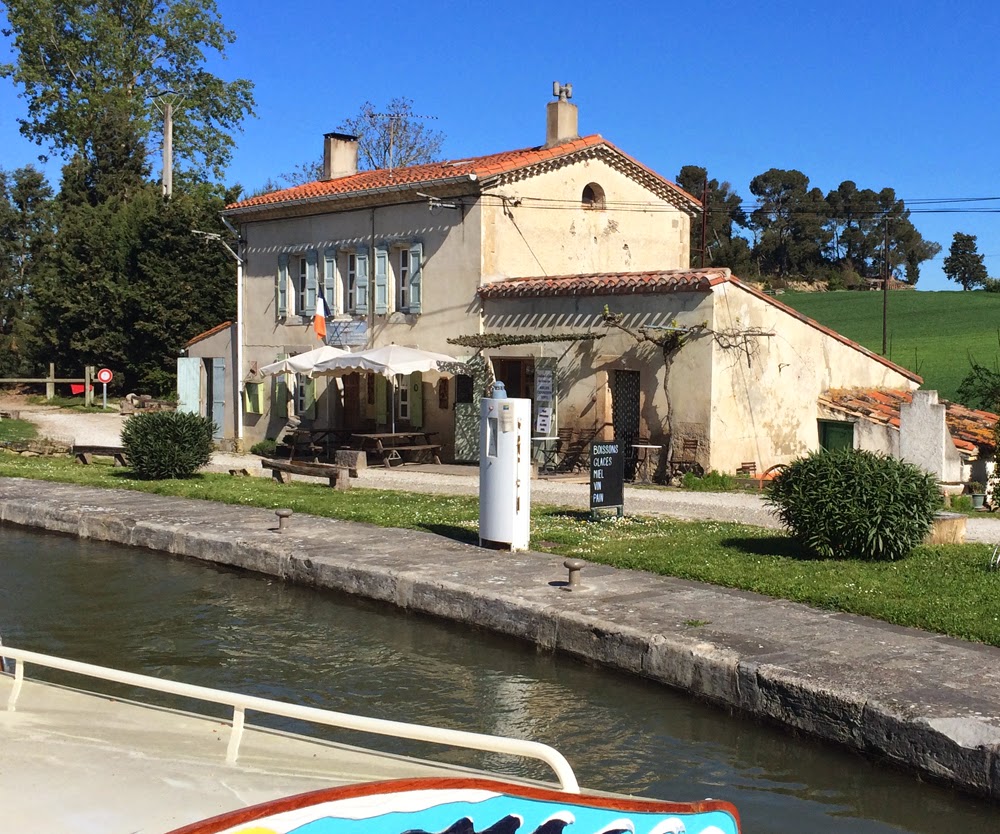 At 0951 on Thursday morning we slipped from our moorings and continued up canal. Ahead of us only eleven kilometres away was the city of Castelnaudary, but in that distance were fifteen locks; six singles then a triple, a double and a quadruple. We set out with the intention of going until we were tired. At one of the singles, la Peyruque, the lock keeper’s house had been transformed into a boutique offering locally made handicrafts, but it had not yet opened for the season. 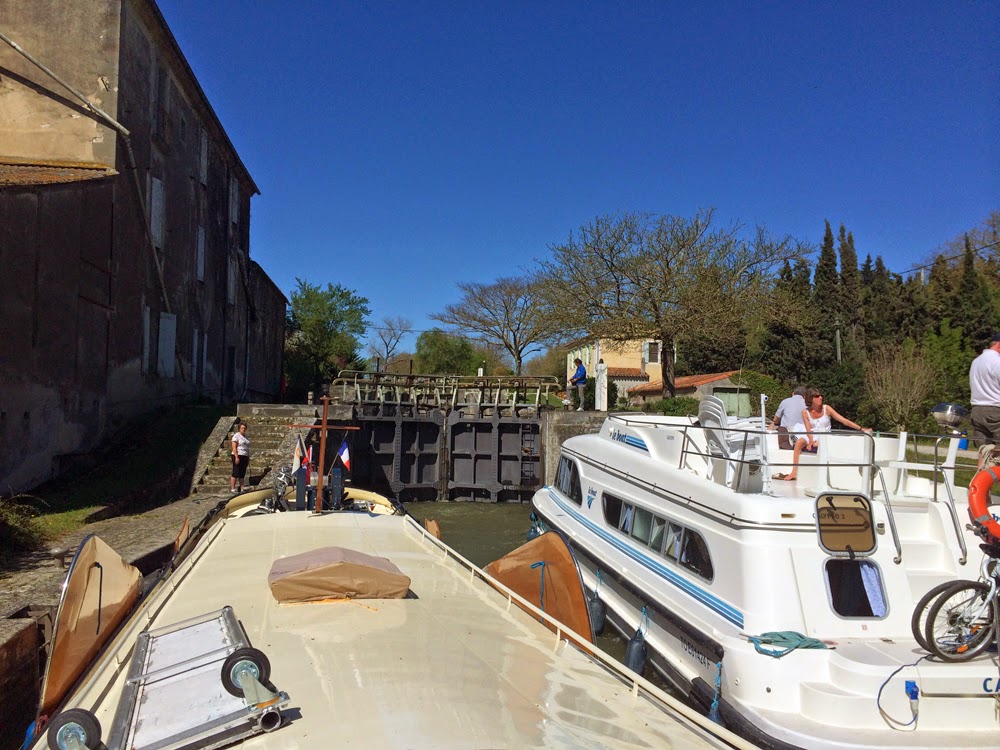 At 1246 we arrived Écluse de Gay, which was closed for lunch, so we secured on the quai just below the lock to have lunch. We had already done the six single locks and the triple. We still had a double and a quadruple to do before Castelnaudary, but since the centre of the city was only two kilometres away, we decided to press on after lunch. We were joined in the double lock by a rental boat, which entertained us with its manoeuvring antics. 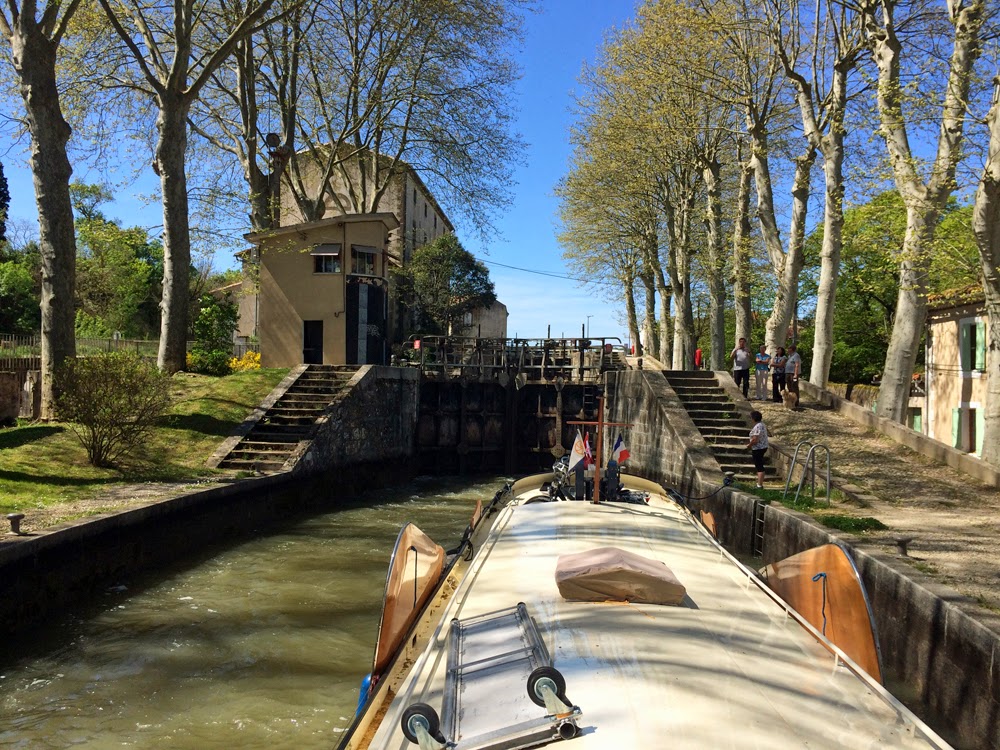 The rental decided to pause between the double set and the quadruple, likely so it could have the lock to itself after we had gone on. 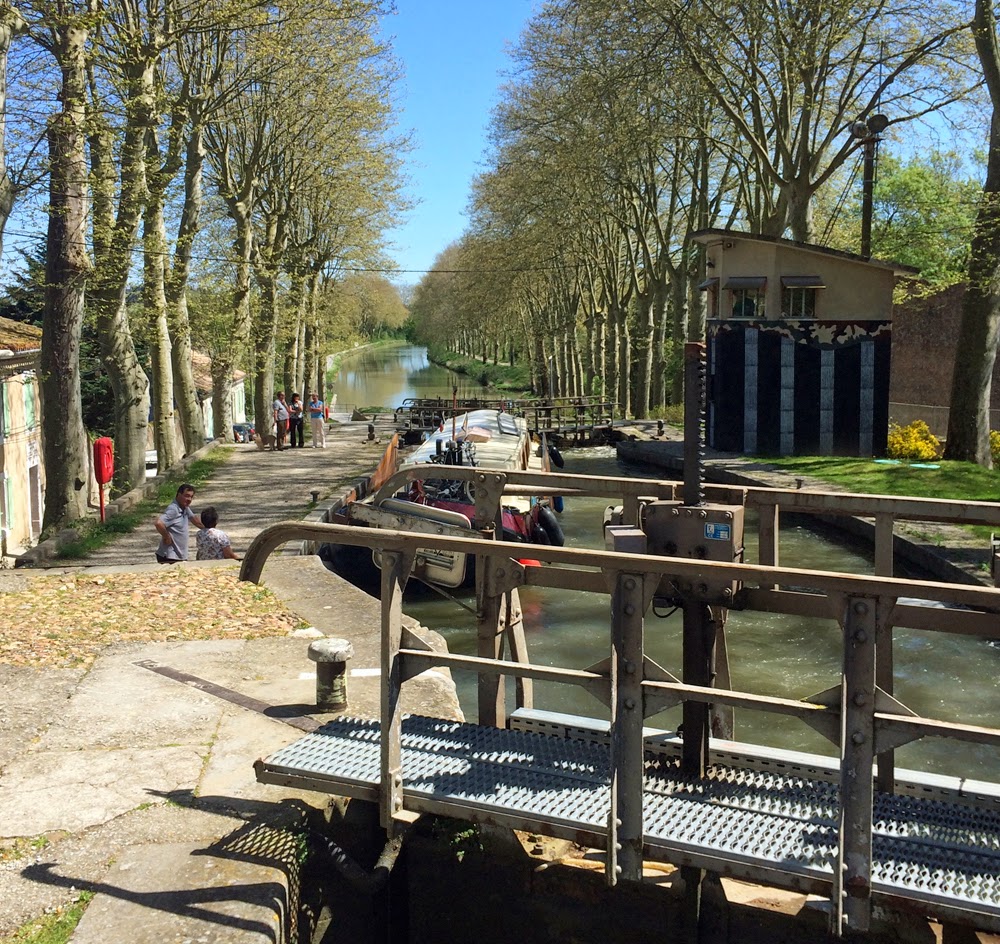 We quickly worked our way up the flight, and at 1425 we were leaving the upper chamber and heading into le Grand Bassin toward central Castelnaudary. 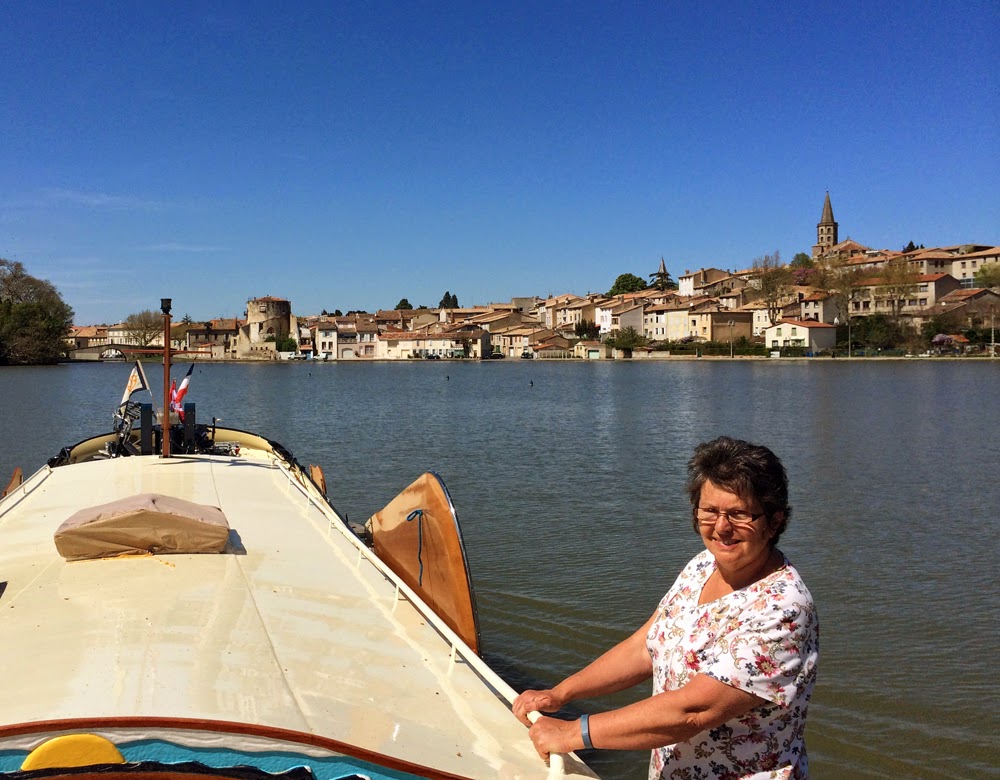 Le Grand Bassin, the largest port on the entire canal, was dug in the 1670s as a reservoir to feed the double, triple and quadruple locks leading up to the city. Unlike in Carcassonne, the city fathers had quickly agreed to pay the additional costs associated with rerouting of the canal into their city. For nearly three centuries the basin served as the major grain shipping port on the canal and Castelnaudary grew in prominence and wealth. 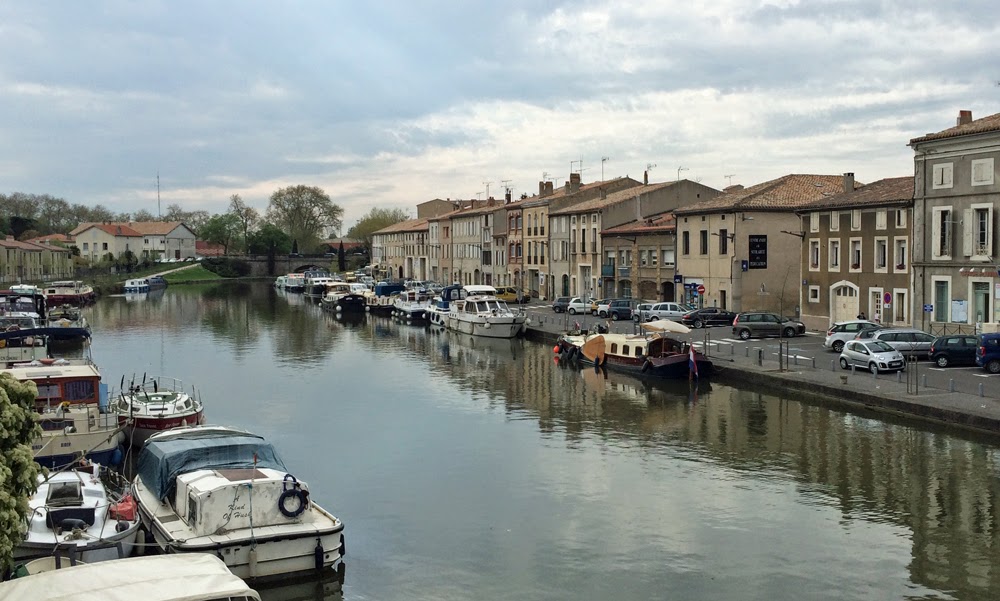 At 1447 we secured to the wall directly in front of the Capitainerie. The place was welcoming, so we decided to pause for a few days.
Posted by Zonder Zorg at 08:45