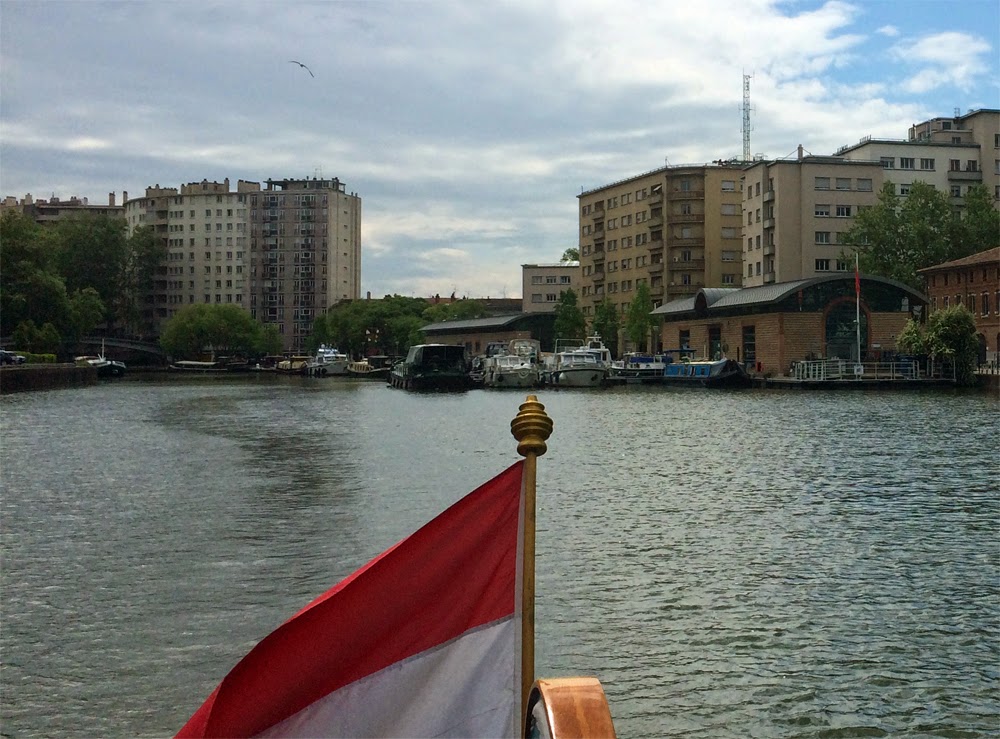 At 1330 on Thursday the 24th of April we slipped our lines from the float at Port Saint Sauveur and continued northward through Toulouse on the final five kilometres of Canal du Midi. We had spent three days in the very modern marina with water, electricity, wifi and security for a total of €66.

Within fifteen hundred metres we came to Écluse Bayard, directly in front of the main train station. Edi twisted the lock wand as the bow passed under it, but got no response form the lights. I twisted it both clockwise and counterclockwise as it passed the stern, but still got no response from the lights to indicate the lock was preparing for us. I dropped Edi off at the bank, from where she had to fight her way over and around anti-vandalism grids, fences and other impediments to get into the lock area. She confirmed to me that the lock was cycling up for us; apparently the lights are dysfunctional. 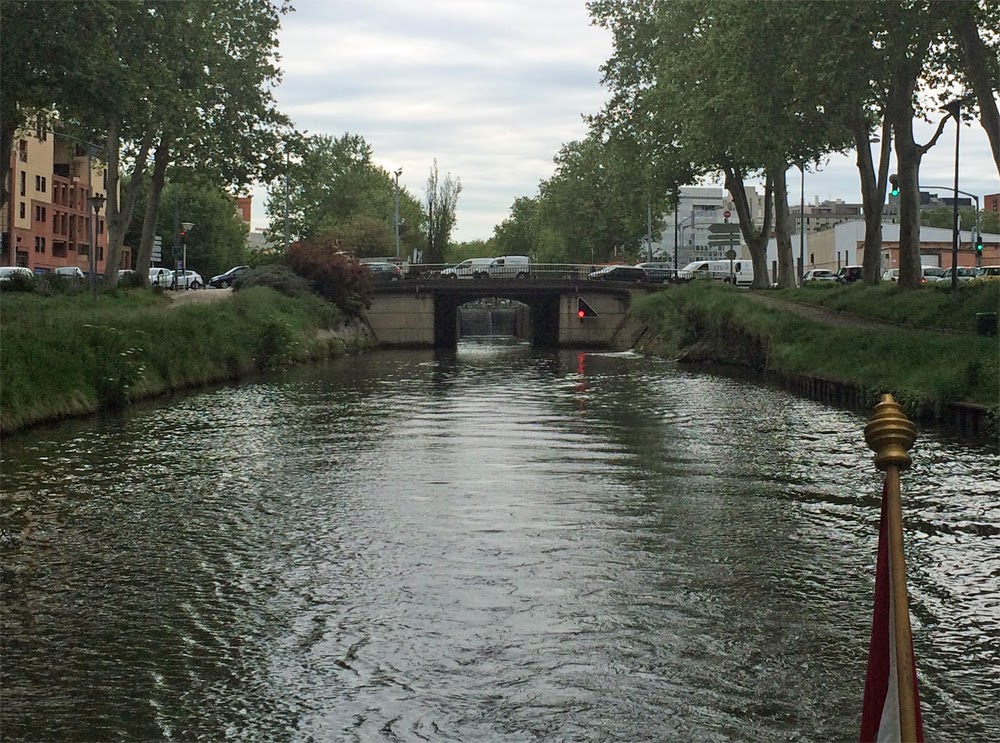 Bayard had originally been a triple lock, but three and a half centuries of heritage were recently ripped out to convert it into a single lock 6.2 metres high. Fortunately it has been equipped with floating bollards that actually work. Another fifteen hundred metres had us in Écluse Minimes, a former double lock bastardized into a 4.43 metre single. A kilometer later, at 1440 we passed through Écluse Béarnais, our final lock on Canal du Midi. It had originally been a single and still is; however, its ovoid shape had been rebuilt into a straight-sided chamber. 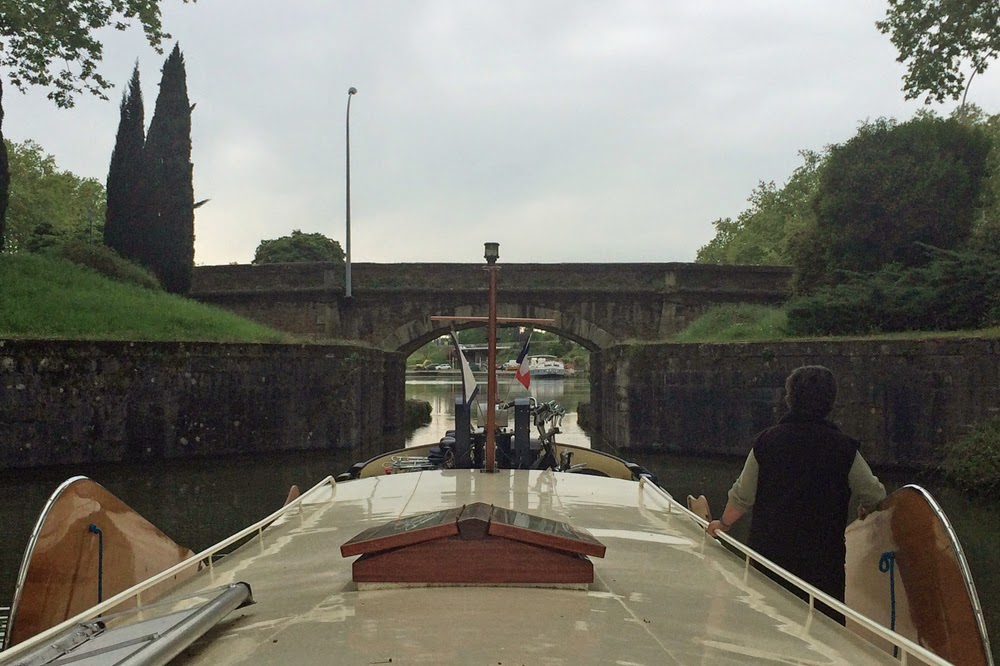 Ahead of us were les Ponts Jumeaux, the Twin Bridges marking the end of Canal du Midi.

We slid under the arch and into le Port d’Embouchoure. At the end of the basin we could see the abandoned lock gate that for two centuries had let barges down onto La Garonne to head downstream toward Bordeaux. 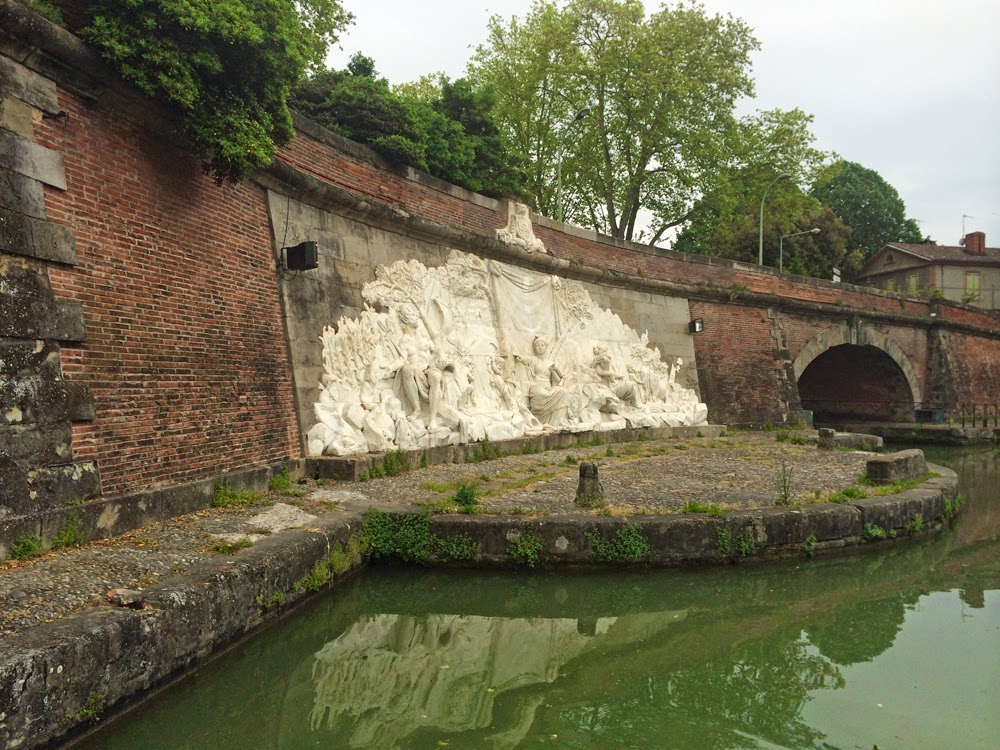 As we emerged from under the bridge we saw the second twin, the bridge hole which led barges onto Canal de Brienne, the short branch to the upstream Garonne. On the masonry face between the two bridge arches is a high relief sculpture created in 1775 by local sculptor François Lucas.

We wore around 255º to port and lined-up on the third bridge hole. The Twin Bridges are now Triplet Bridges; in 1843 with the construction of La canal de Garonne, a third arch was added to lead from l’Embouchoure to the end of the new canal. At 1446 we entered le canal de Garonne. 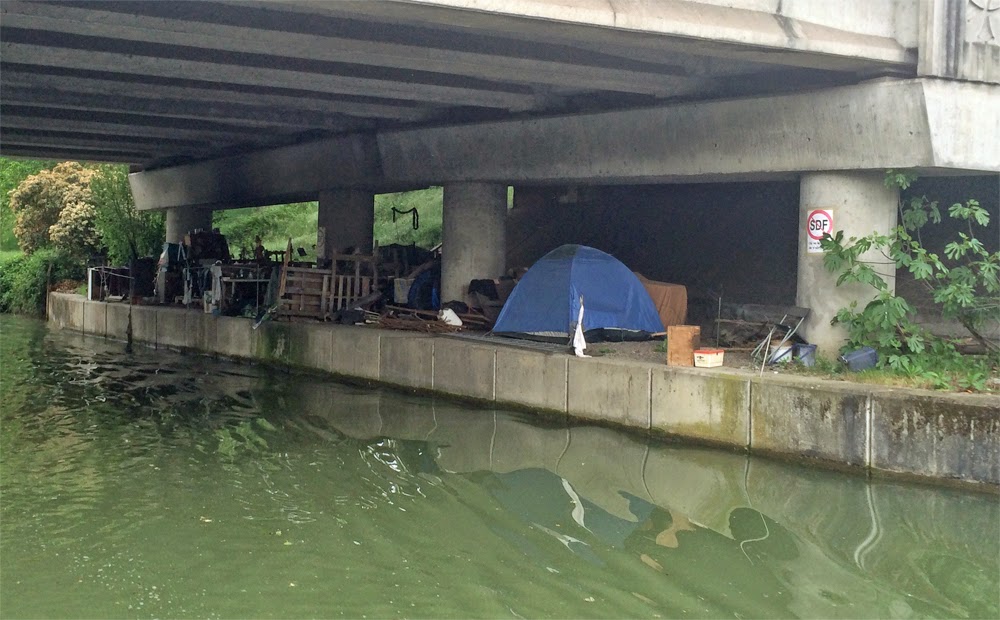 After three kilometres of industrial build-up along the canal banks, we came to the first lock, Écluse Lalande. We were pleased to see it is equipped with pipe bollards set into in recesses down the sides of the chamber. Locking through was easy, simply a matter of monitoring the bights of line we lead around the pipes from our cleats fore and aft. The industrial landscape continued after the lock, with a large number of homeless encampments along the banks and under the bridges. It does not appear a safe place to stop. 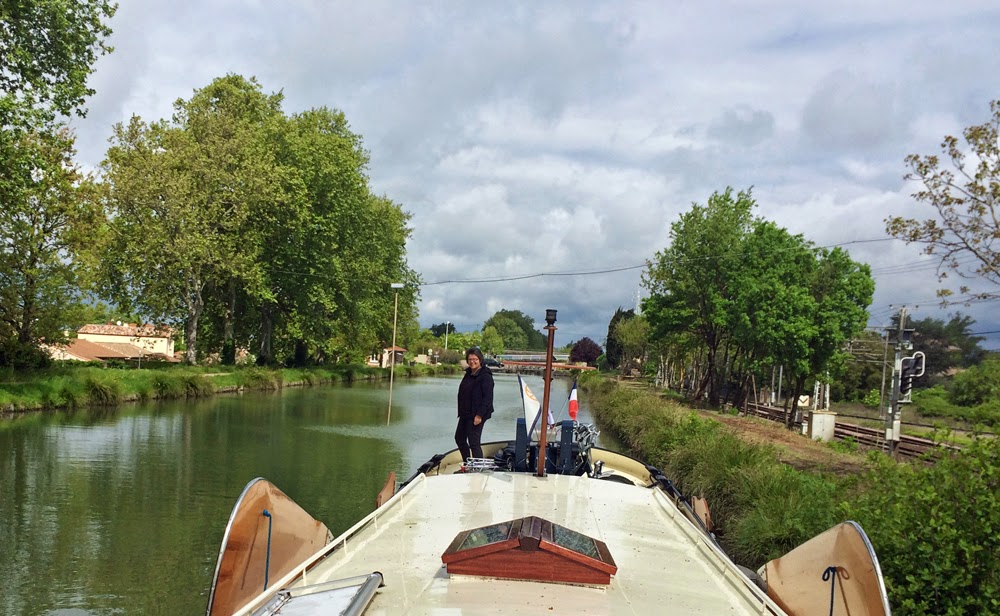 The main line of the railway joins the canal here and follows along its right bank for the next thirty-three kilometres. Two more locks in the next four kilometres took us to an easing of the industrial build-up. We carried on another three kilometres to just before Écluse Lespinasse, where at 1647 we dropped the spud pole and secured the stern to a bollard on a two metre wooden quai. We were almost within arm’s reach of the lock’s dangling actuator rod. The canal is built up between high retaining banks as it approaches the lock and this put us well above the train tracks and away from the wheel noise of the frequent trains. In the evening we celebrated having reached the end of Canal du Midi and having started down le canal de Garonne. For dinner we enjoyed pan-seared dos de cabaillaud topped with crisply sautéed pleurottes and accompanied by white asparagus with a mustard mayonnaise, pommes rissolées and sliced tomatoes with shredded basil. The Crémant d’Alsace from Arthur Metz added wonderfully to the meal and to the occasion. 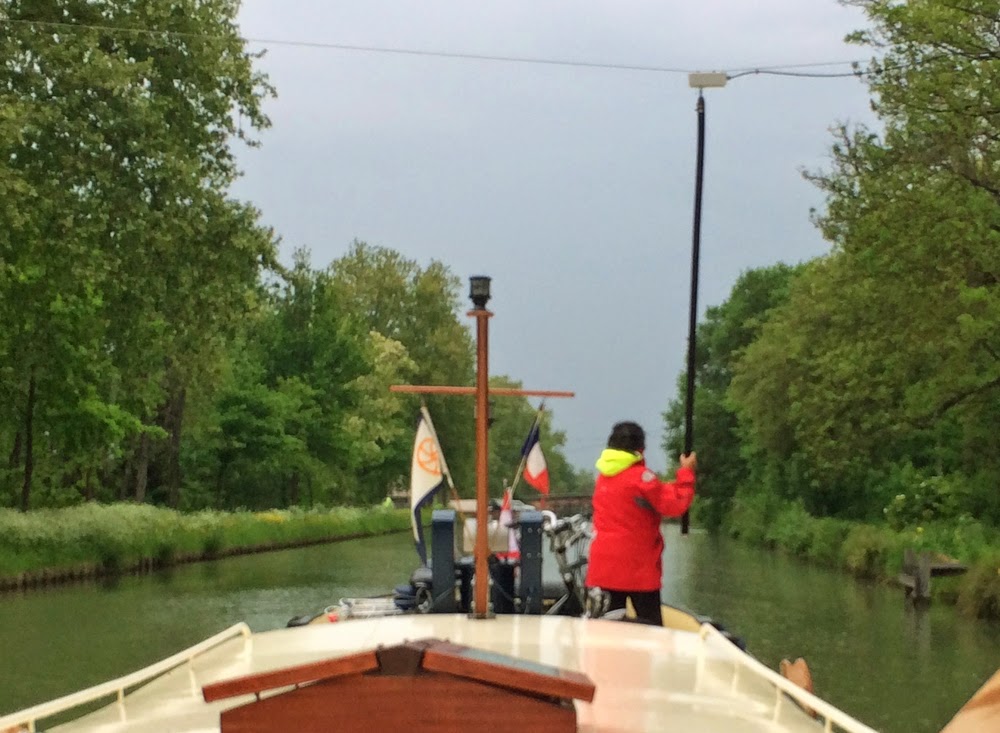 It had been raining every day for the past week and the ten-day forecast showed only one day without rain. Knowing that it would be a long wait for a clear spell, shortly past noon on Friday we continued along under April showers. The countryside around the canal became increasingly pleasant as we worked our way down through six locks and along another 15.6 kilometres. 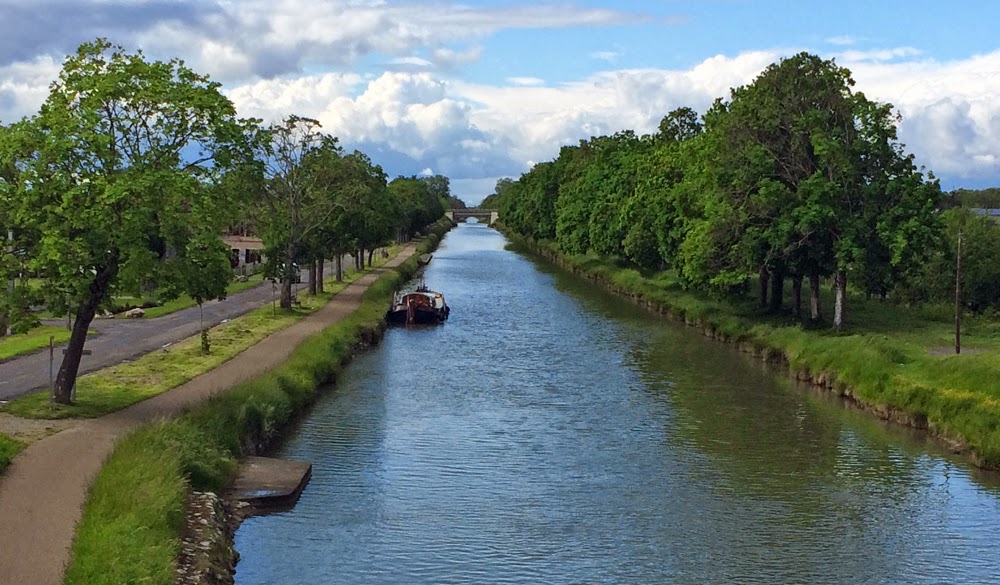 At 1550 we came to the spud pole and a stern line to a bollard on a solid wooden wharf just downstream of the bridge in Grisolles. We were at Kilometre 27 and far enough away from the unsavory outskirts of Toulouse to feel comfortable again. We took advantage of a respite from the rains to walk through the pleasant little town and out to the large supermarket on its other side. The rains recommenced just before we arrived, so we shopped long enough for the thunder shower to pass over.

The next morning we raised the spud pole, slipped our stern line at 0940 and we continued down the canal. Sixteen kilometres of pleasant countryside, several rain showers and one lock later we arrived in Montech shortly before noon. We drifted slowly past the halte nautique looking for an empty space. The arrangement is a modified Med mooring with stub pontoons jutting out about three metres every ten or so metres along a concrete wall. 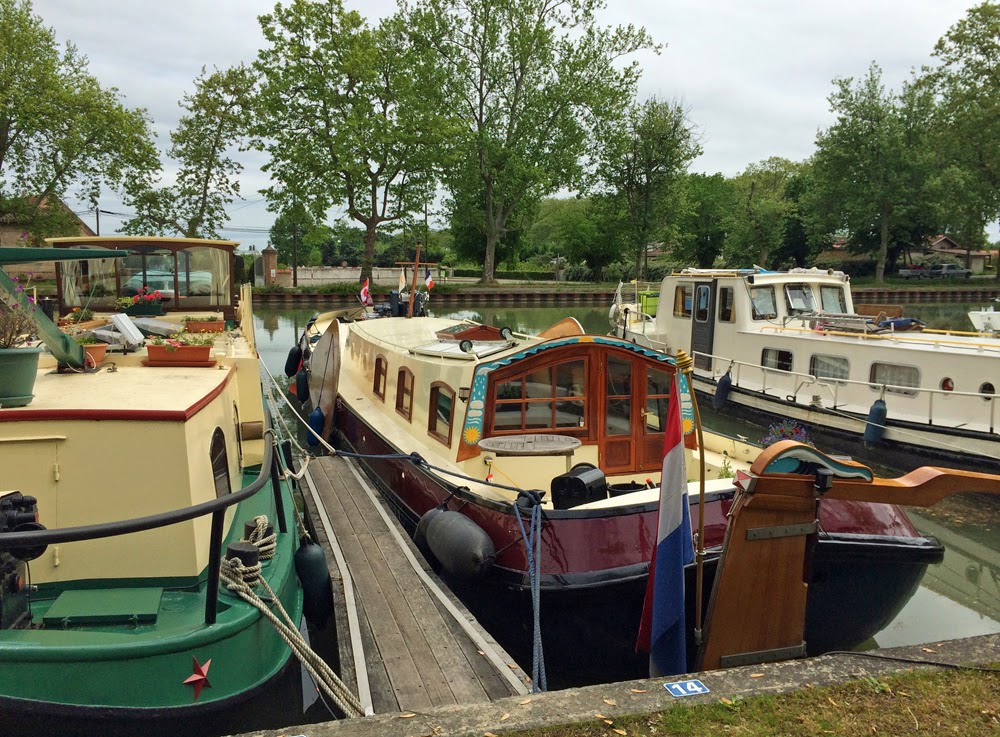 We spotted an opening and I put the engine astern. For the next three or four minutes I gently played with the current and wind to drift gracefully in a single arc with only two engine moves and arrived perfectly stern-to into the tight space. At the last second I swung the tiller over hard to keep the rudder off the wall, dropped the spud pole to secure the bow and handed a bight of the stern line to the astonished bargee next door to drop over the cleat. This was one of those times when there should have been hundreds watching, but the hoards of onlookers seem only to be gathered when everything goes wrong. 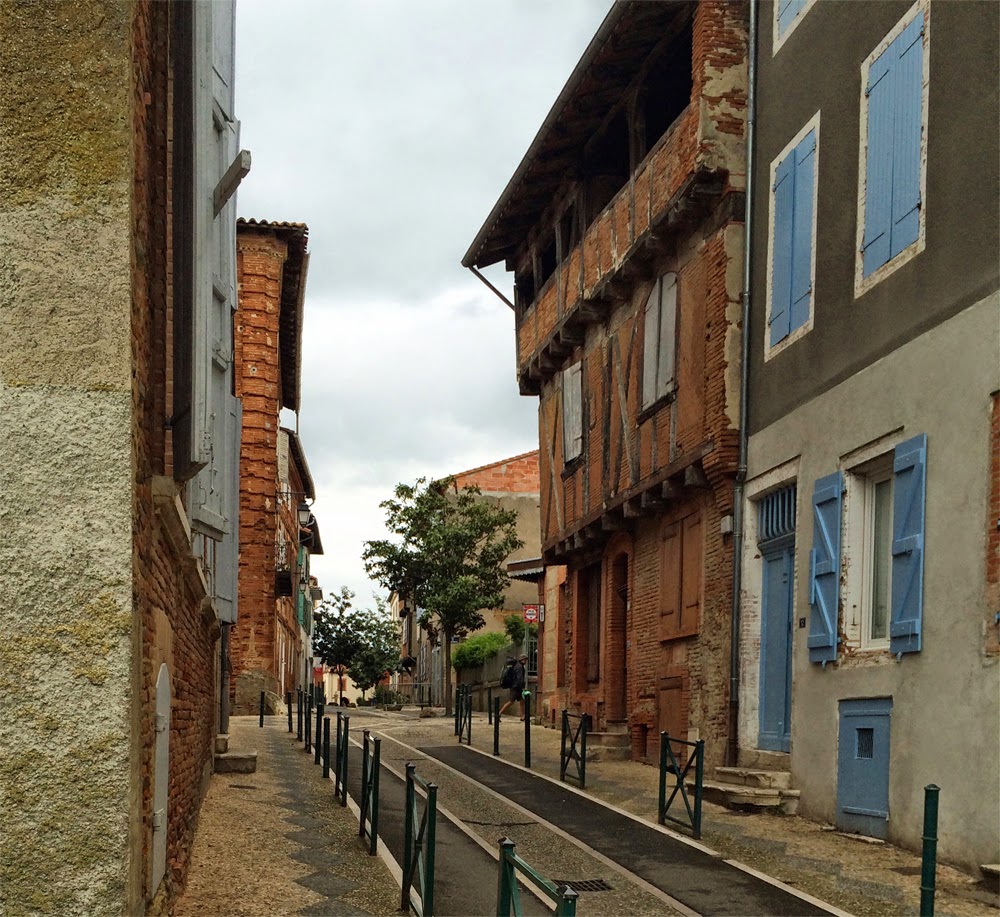 We spent four rainy days in Montech for €28, including water and electricity. It is a pretty little town with many old half-timbered buildings along narrow streets. We went exploring during the brief interludes between the rain showers and also made visits to the in-town mini Carrefour supermarket and the large Intermarché a kilometre to the north of the canal. 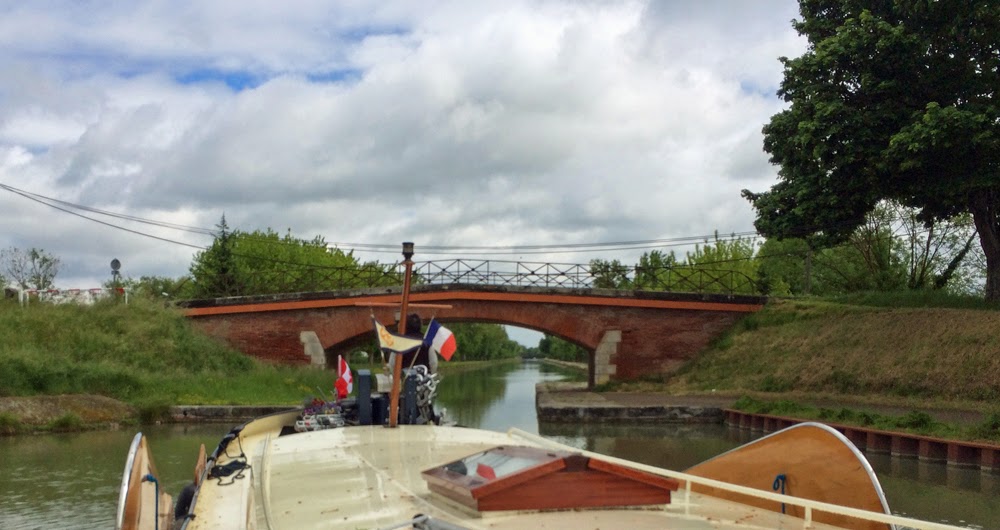 Shortly past noon on Wednesday, after the day’s showers had paused, we raised the spud pole, slipped our line and headed down canal. Within two hundred metres we turned to starboard into Canal de Montech. This 10.9 kilometre branch, also known as l’embranchement de Montauban, leads to the Tarn River at Montauban. It was opened in 1843 with the opening of le canal de Garonne, but fell into disuse and was abandoned after the middle of the twentieth century. It has recently been restored and re-opened. 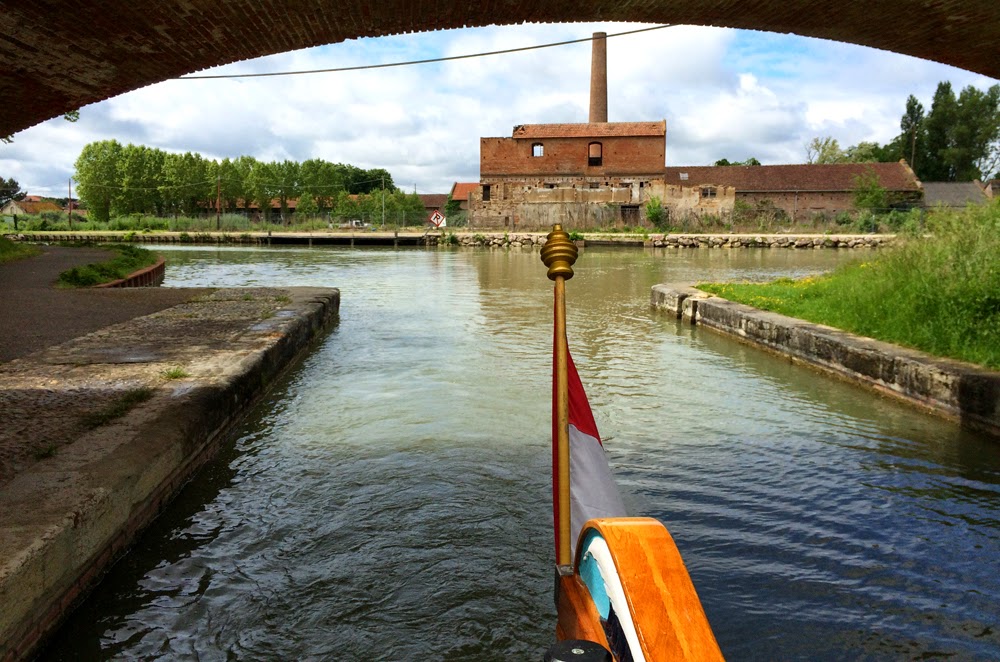 Behind us we left the ruins of the abandoned paper mill that had operated alongside the canal de Garonne. It had been built in 1856 and once employed over three hundred people, producing originally newsprint, and after modernization half a century later, it changed to high quality papers. After the middle of the century its competitiveness declined and it was finally closed in 1968. 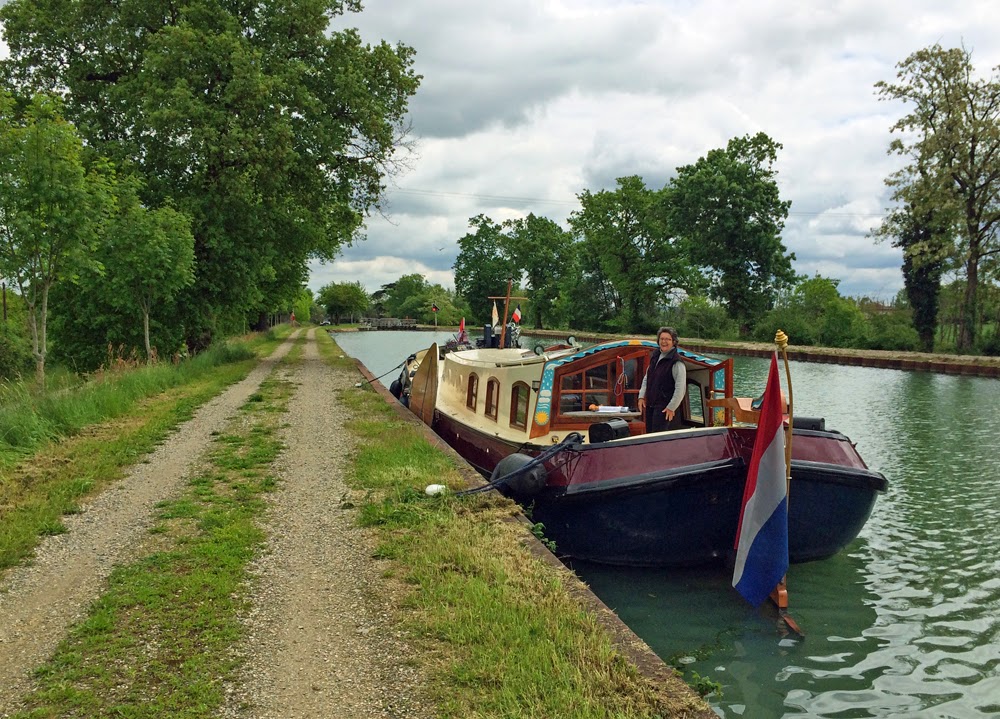 There are nine locks, which are open from 0930 through 1900 without interruption for lunch. Four and a half kilometres down the canal, at 1250 we came to the first lock, just before which was a sign giving a number to call to obtain a remote control to operate the systems. I called the number and spoke with the VNF roving éclusier, who told me he was at lunch and would be back at 1400. We pulled over, moored and waited. The locks are open, but not the lock keepers. 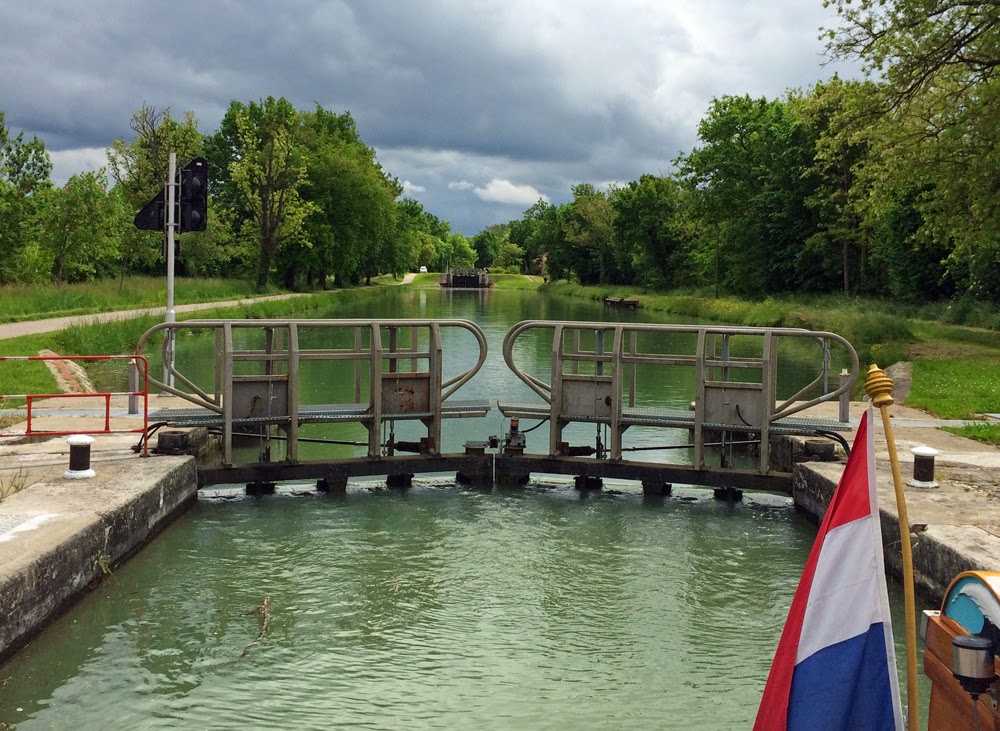 Shortly after 1400 the red light changed to red and green, the gates opened and we entered the chamber. L’éclusier issued us with a four-button télécommande and instructions for its use. The first eight locks are within three kilometres of each other and they are all equipped with ample bollards, including vertical pipes in recesses in the left bank of the chamber walls. The system works easily. 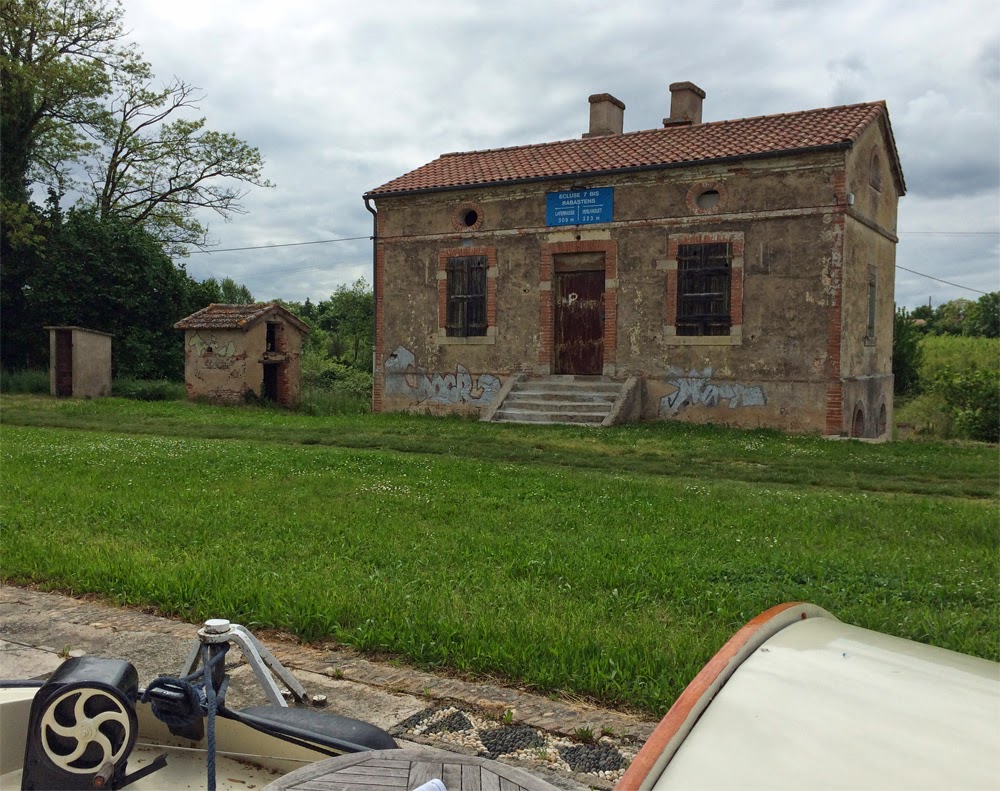 The lock houses appear all in good condition, though some are drably set, unoccupied and boarded-up. 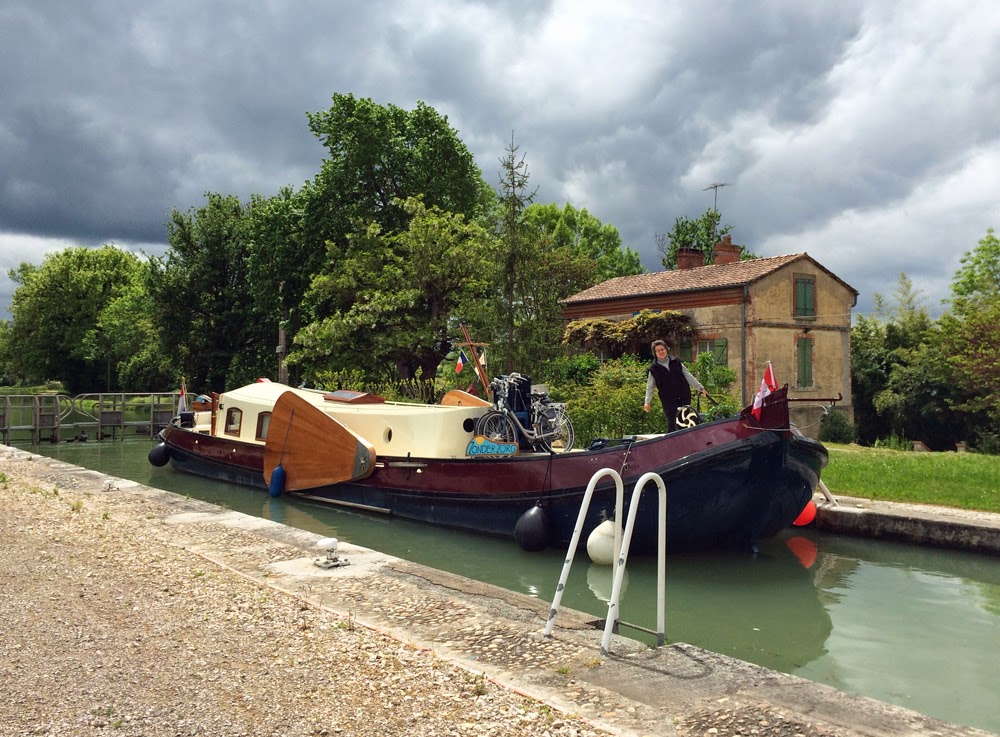 Others are attractively set and are occupied either by canal employees or are rented to locals. 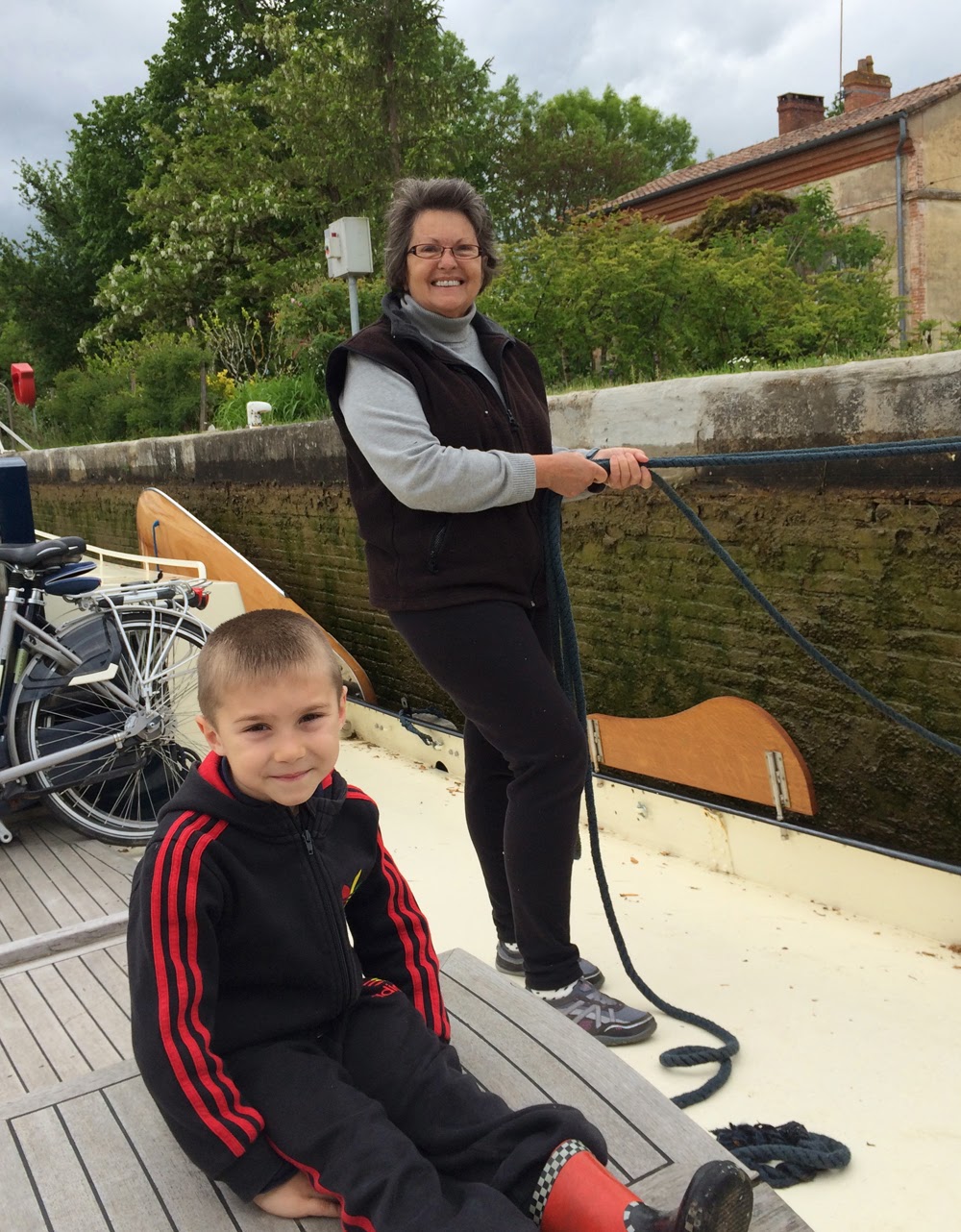 As we worked our way down the canal a man and his young son paralleled our route, moving from lock to lock on an ATV. He carefully explained the workings to the five-year-old, pointing-out the various operations as Zonder Zorg made her way along. After watching this intense interest for five locks, at the sixth I asked the man whether his son would like to come aboard for a couple of locks. The response was immediate and positive. We gained an additional crew member. 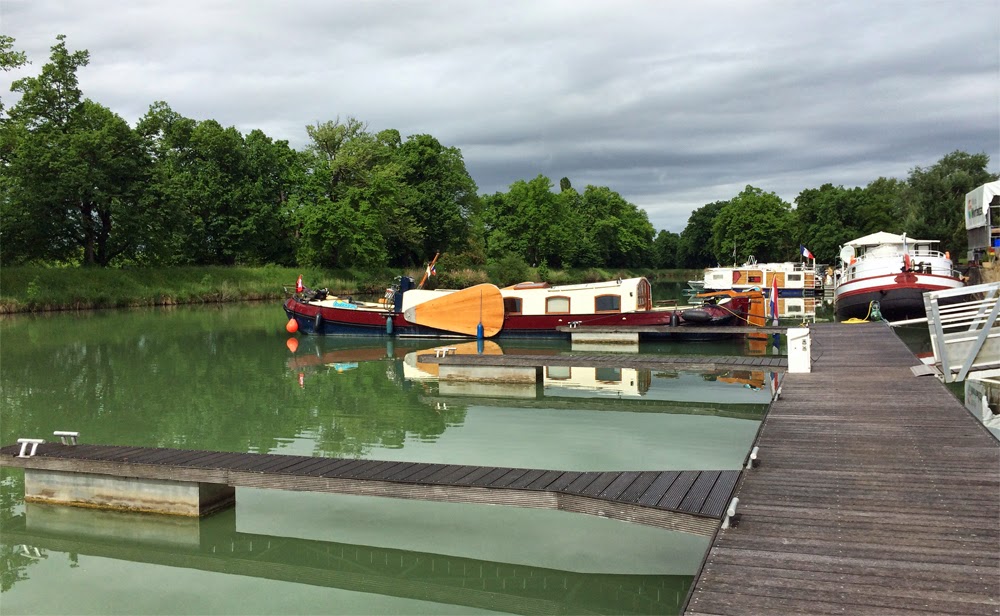 He rode along with us through three locks in less than half a kilometre, quietly watching the action from a different perspective. We let him off at the eighth lock and we carried on the final two and a half kilometres and one lock to the end of the canal. At 1613 we secure stern-to on a stub pontoon with our bows secured by the spud pole, directly in front of la Capitainerie in le Port Canal de Montauban.

The following day was the 1st of May, la Fête du Travail, the Festival of Work, when everything is closed and the people of France celebrate doing nothing. So that they don’t feel discriminated against, the automatic locks are also given the day off, so will be held captive until Friday. We paid the Capitain €14 for two days moorage, which included water, electricity and a strong wifi connection
Posted by Zonder Zorg at 05:39