To the Summit of Canal de Bourgogne 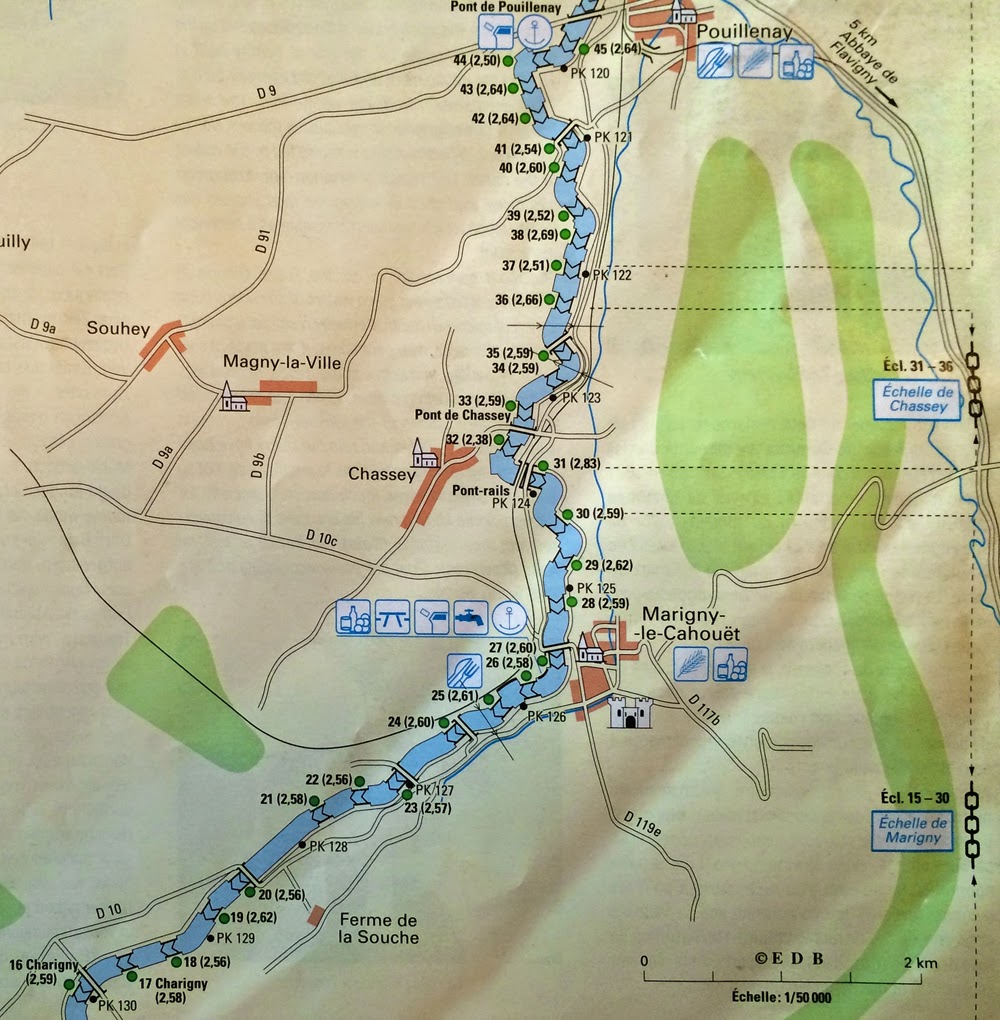 Having paused for the day in Pouillenay on Monday to celebrate our one-thousandth lock, on Tuesday, 9 September we slipped and headed up the canal to begin our second thousand. Immediately ahead of us was a quick start; there are thirty locks in the next ten kilometres. Again we were alone in the locks, so passage through them was routine, uncomplicated and rather quick. By mid-afternoon we had made 6.1 kilometres and had ascended nineteen locks to arrive in Marigny-le-Cahouët, the recommended stopping place. We secured for the day and walked into the village to the l'épicerie and boulangerie for fresh supplies to discover that Tuesday is their closing day. We walked back empty-handed. 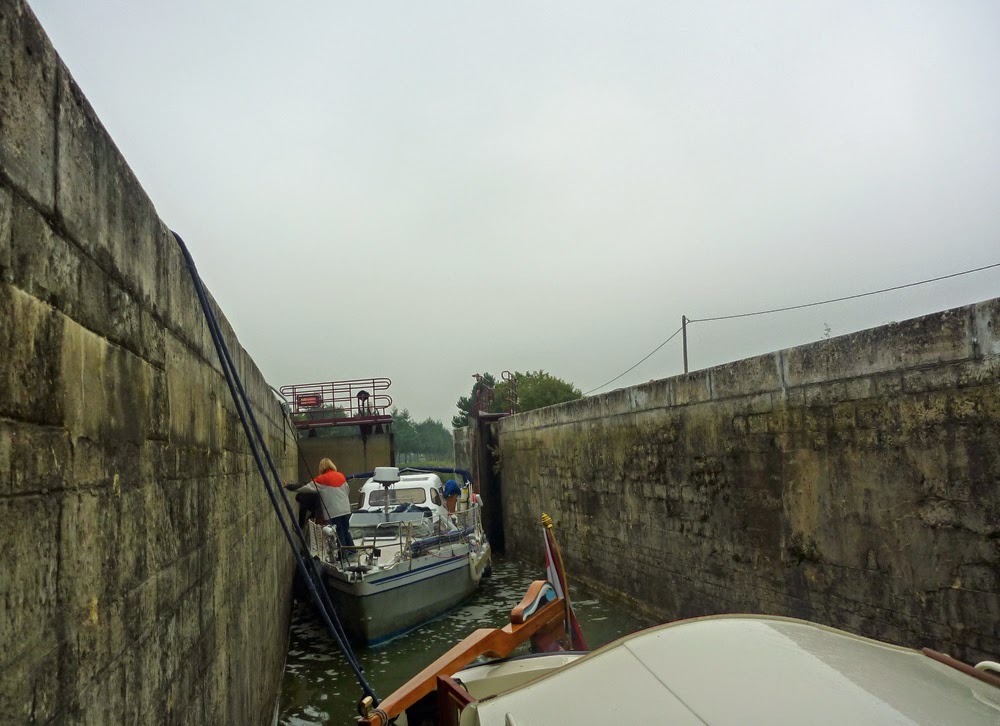 On Wednesday we slipped at 0855 and were followed into the first lock by a small sailboat owned by a French couple. We fell into a routine with the sailboat skipper closing one of the downstream gates and me opening one of the upstream ones, making the job of l’éclusier lighter and speeding our progress. 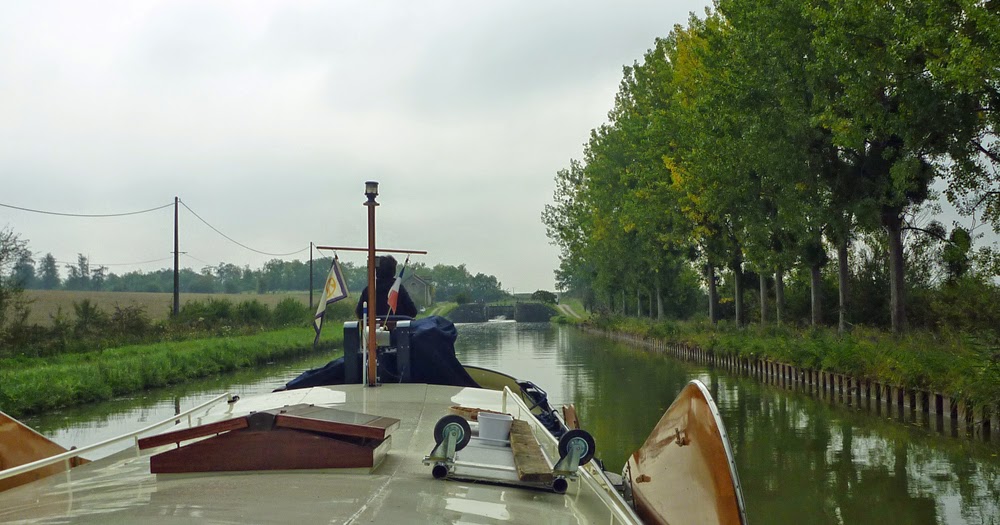 The first series locks was in our favour from down-bound traffic on the previous afternoon and by noon we had made four kilometres and twelve locks to reach the end of the steep climb. As l’éclusier took his lunch break, we dawdled along toward the next lock in our first long bief in forty locks. 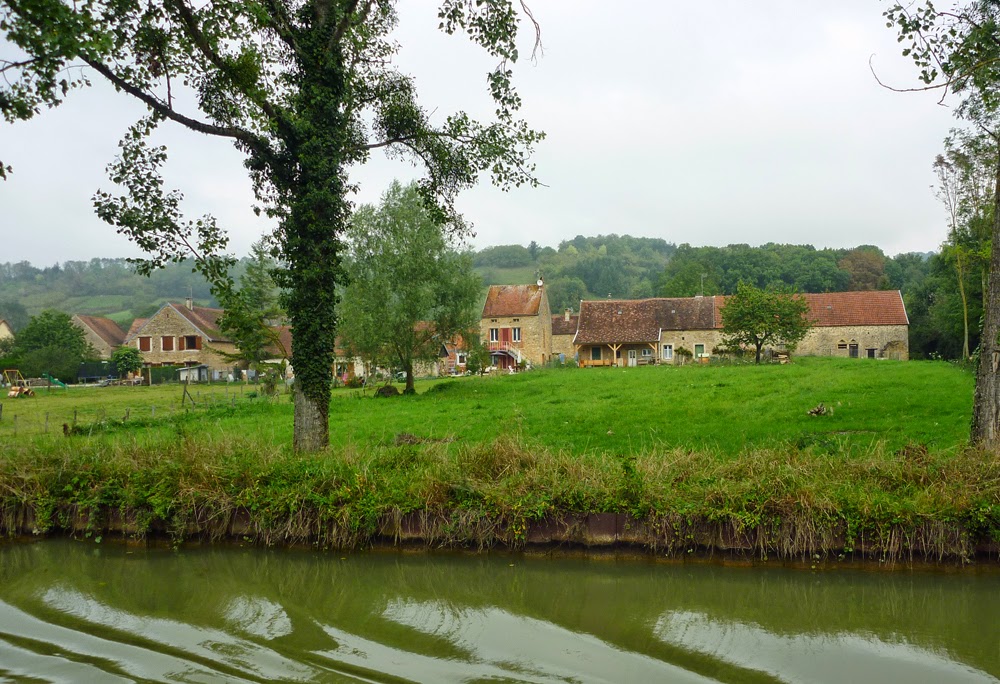 Ahead of us was a gentle climb through four locks in twenty kilometres before the final steep eleven lock rise to the summit of the pass. We were well above the river and the countryside had become noticeably less steep. 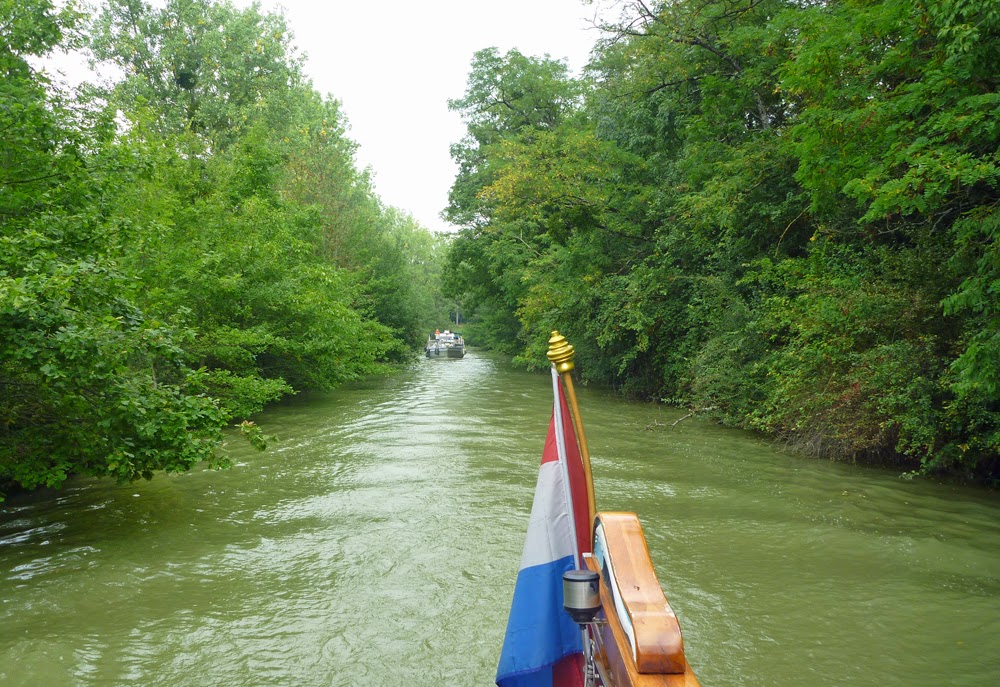 After the lock keeper rejoined us, we passed through the next lock and entered a narrow section. Here the trees hang far out from the banks, and in places constrict the passage to little more than a boat width. This half kilometre narrowing is a trench across a ridge to allow the canal to make its way more directly through gently undulating terrain. 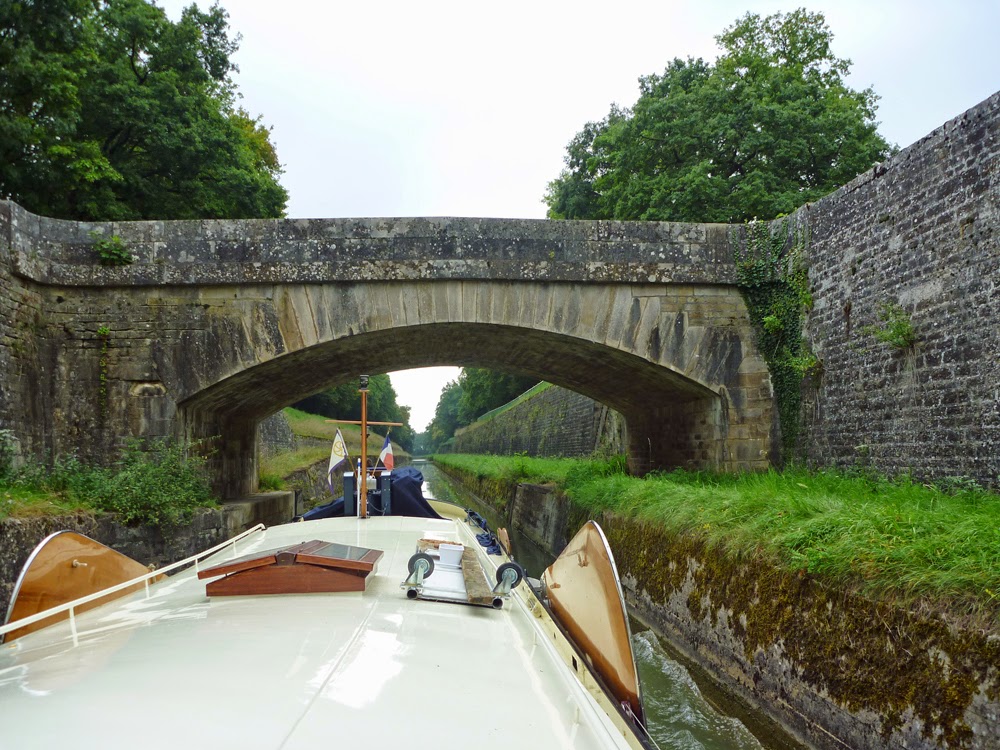 After passing through two more locks we entered another narrow section. This one is 1130 metres long and is cut so deeply into the ridge that the sides needed to be reinforced with masonry walls. This cut allows the pound between locks to be over ten kilometres long. 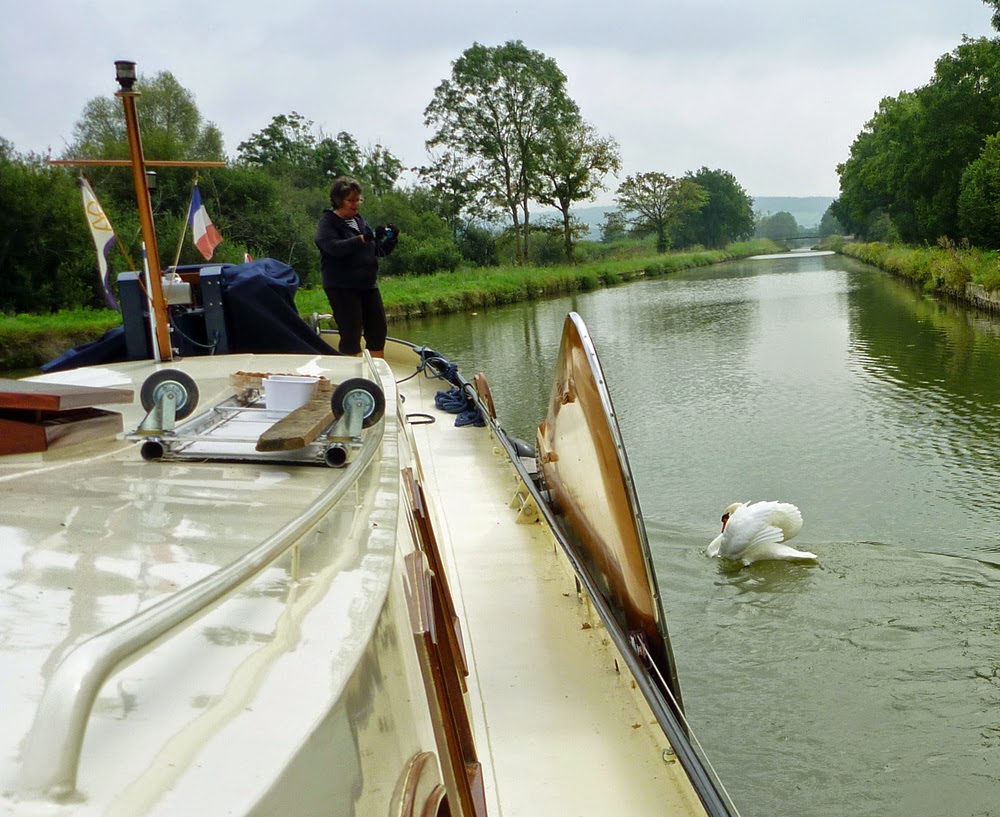 Along the way we were challenged by a swan. With its wings raised to make it look bigger, it swam aggressively toward Zonder Zorg as we approached. Maybe it thought our leeboards were raised in challenge. 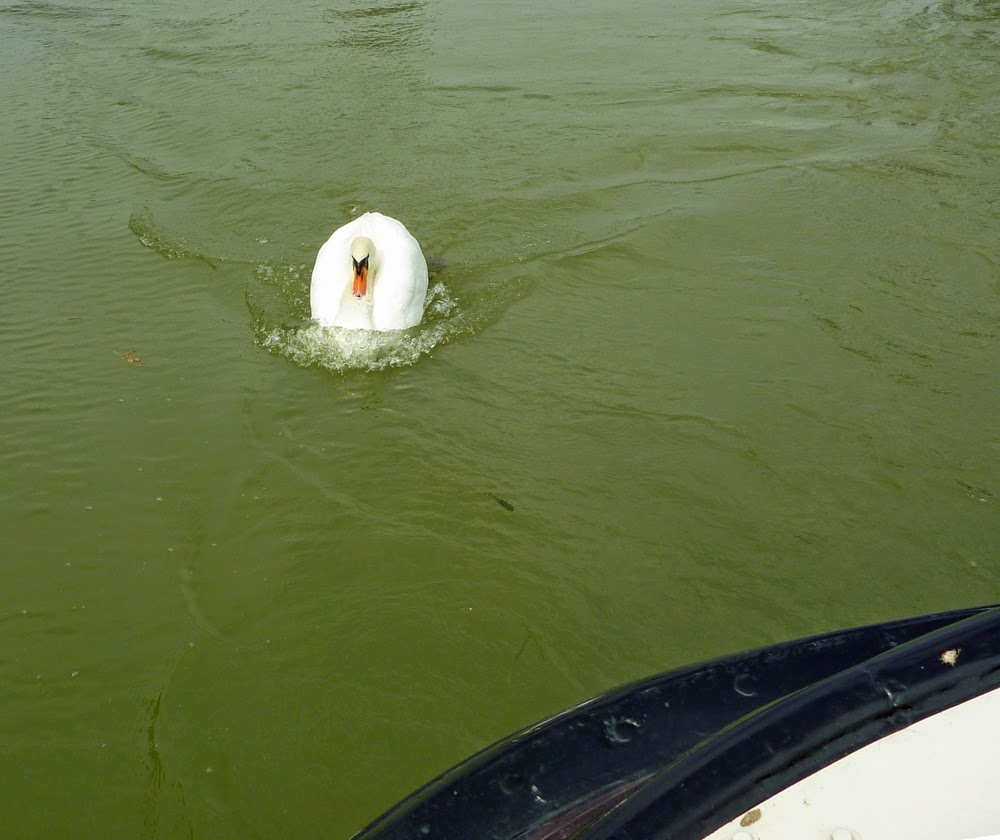 After we had passed it chased us furiously to ensure we kept going. 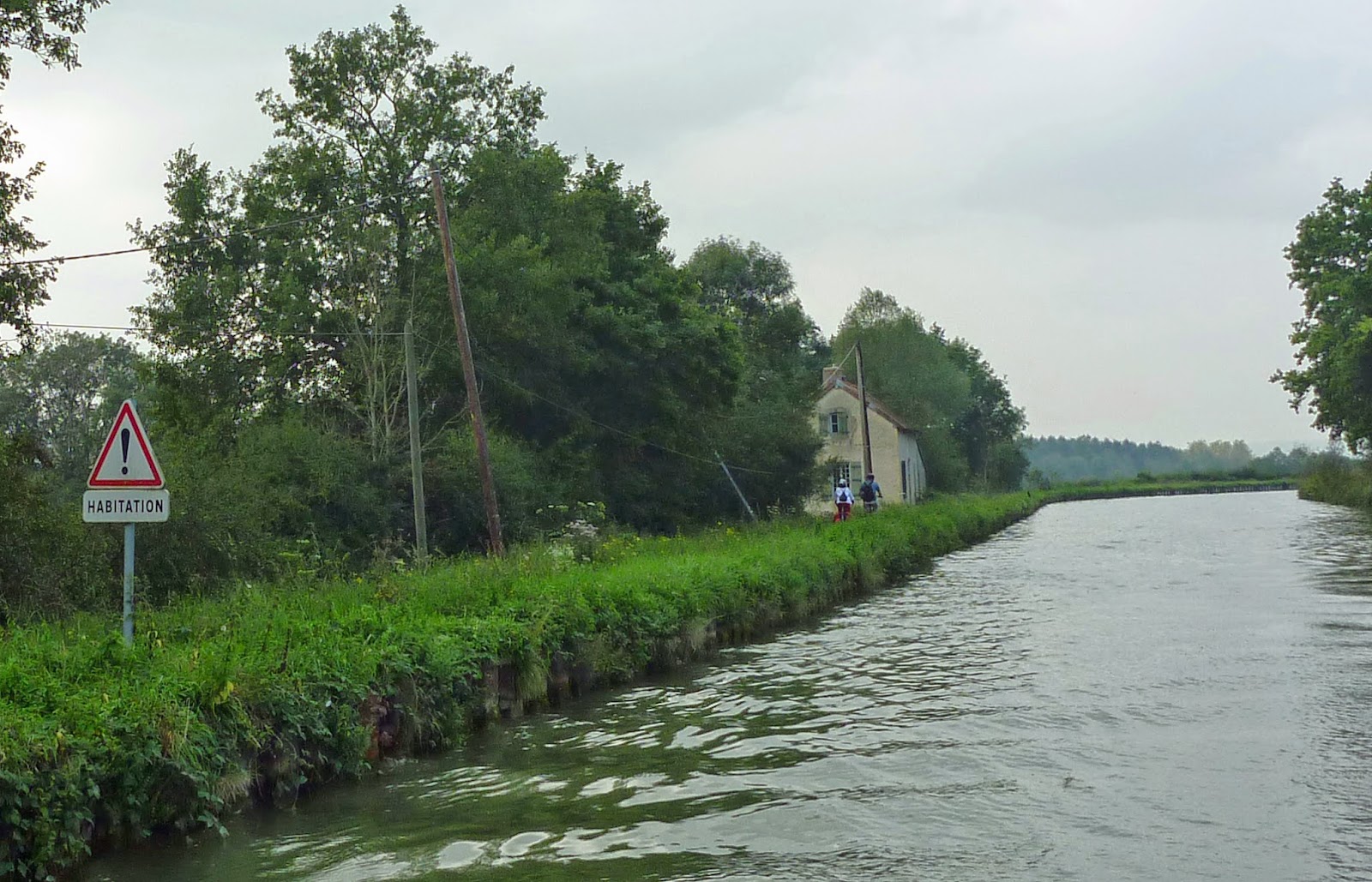 The long bief is rather desolate. This is confirmed by a caution sign along the towpath. It warns of a habitation. 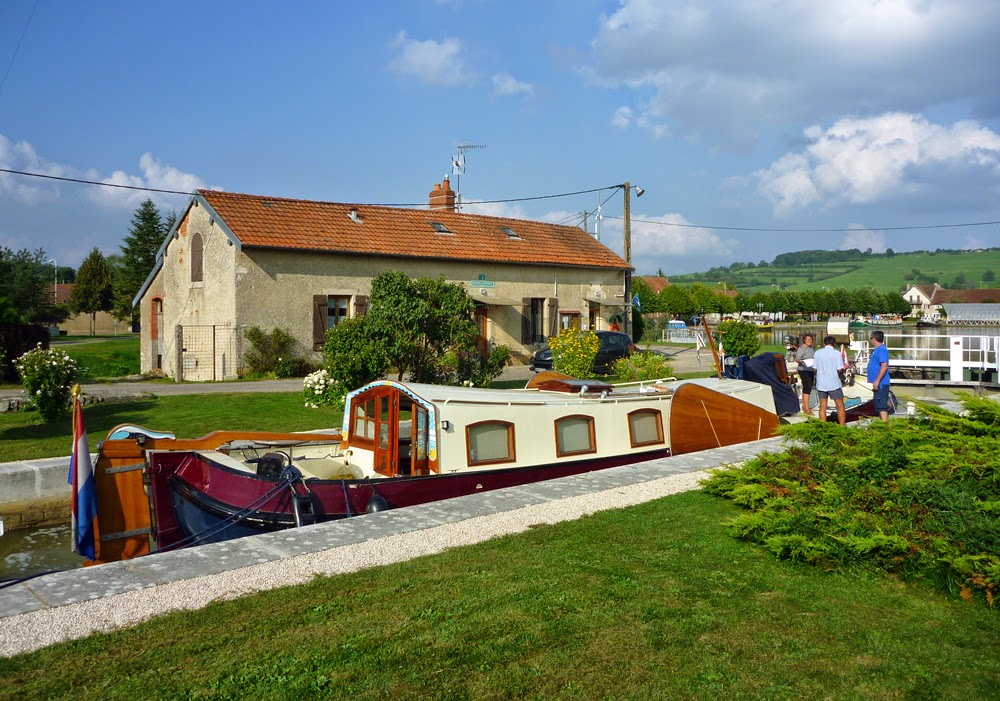 At 1725, after a final steep climb we arrived at ÉclusePouilly, the 112th and final lock up to the summit. L’éclusier gave us a sheet of paper with instructions on passing through the tunnel and asked if we intended to continue in the morning. We had done twenty-six locks and nearly thirty kilometres since morning, so we told him we wanted to take a day off and would probably leave early Friday morning. 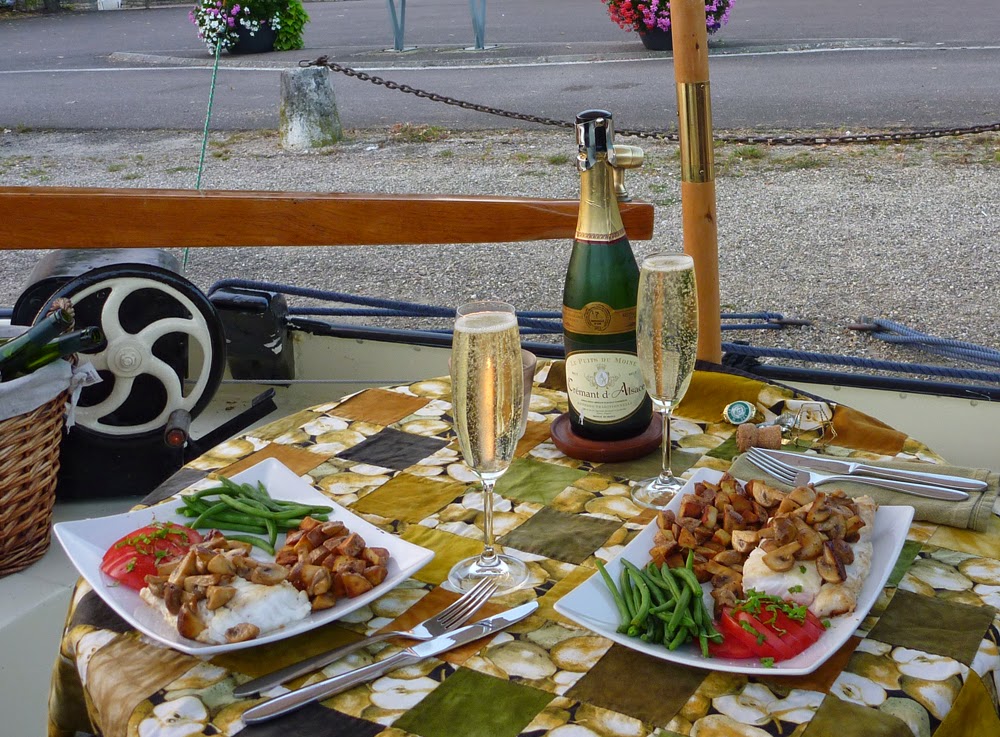 We motored into the summit pound and took a mooring on the stone quai next to an electrical and water pylon. In the evening, to celebrate our reaching the summit, I prepared dos de cabaillaud with sautéed mushrooms, potatoes rissolé and steamed green beans and we enjoyed it with a bottle of Crémant d’Alsace.
Posted by Zonder Zorg at 13:06