Continuing Up the Bourgogne 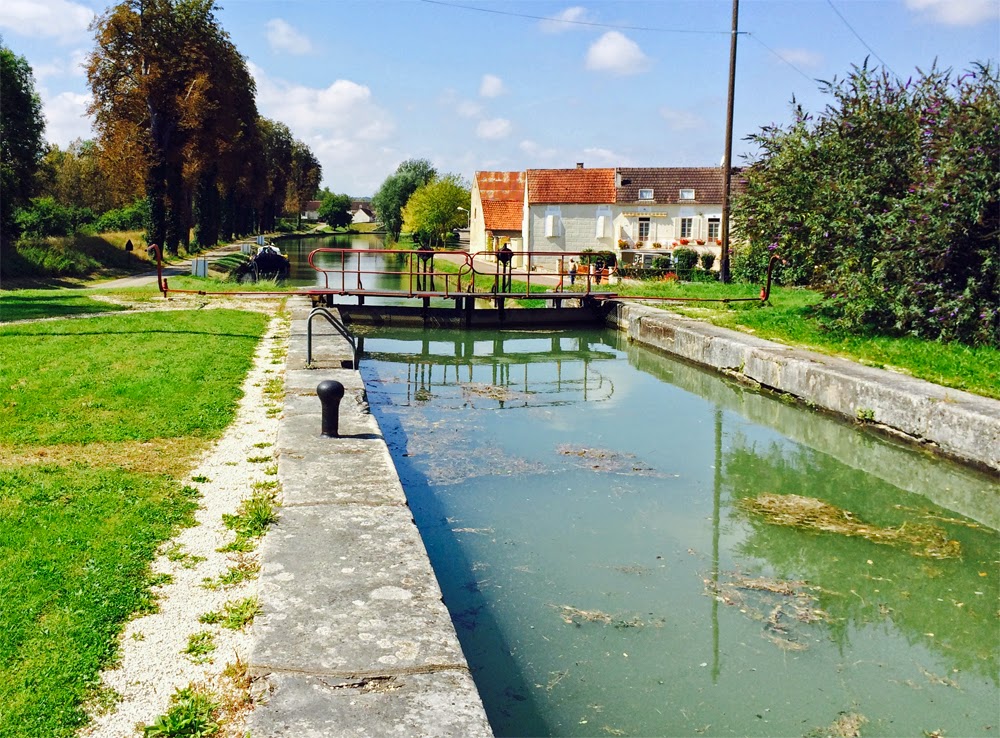 At 1240 on Wednesday, 4 September we slipped from our moorings in Tanlay and continued up le canal de Bourgogne, timing our departure to have us at the next lock as it reopened after lunch. A couple of locks along we had to wait for the arrival of l’éclusier to prepare it for us. As we waited, we wandered up to the lock to see it full of grass clippings. We continue to be amazed that the only apparent maintenance along the canals is the grass cutting, which dumps clippings into the canals to clog the gates and sluices and the cooling water intakes of the boats. 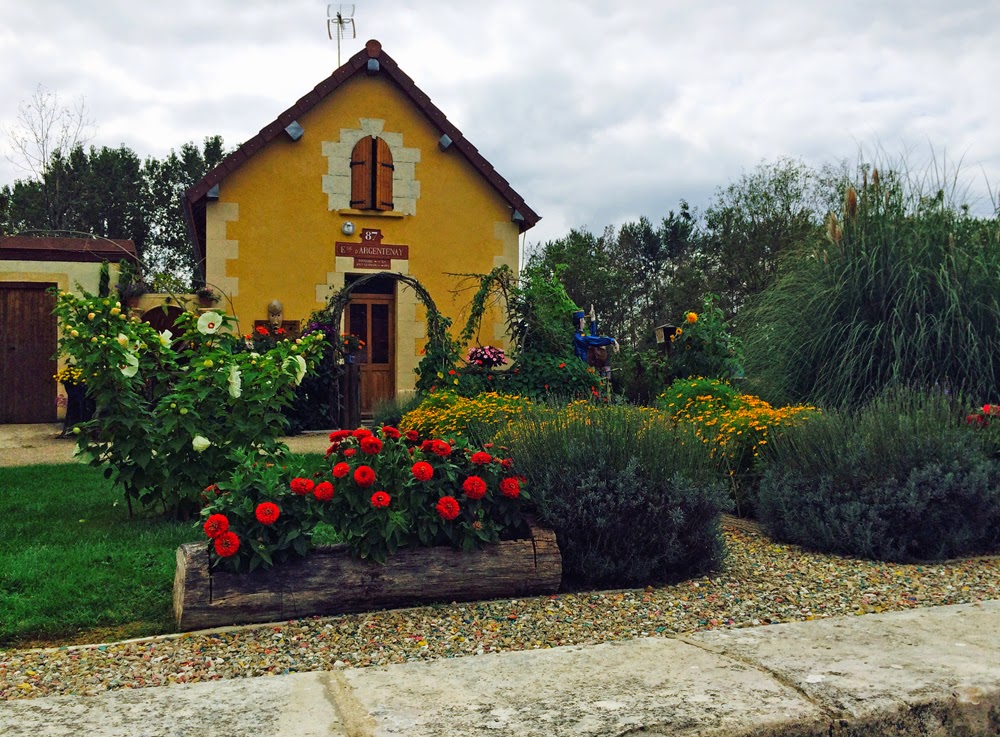 At Écluse d’Argentenay we asked l’éclusier about nice mooring recommendations in the next few kilometres. He told us there was little to choose from; the moorage four kilometres along at Lézines is close to a railway bridge and noisy. Ten kilometres further is a quiet stop at Ancy-le-Franc. We decided to head there. 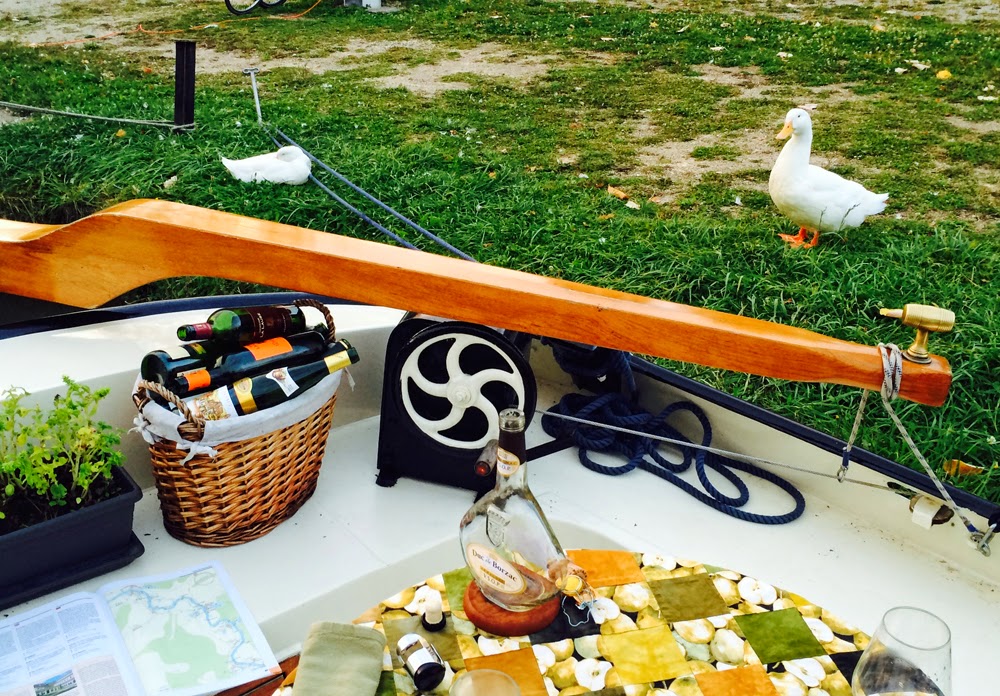 Shortly after 1800 we moored with the spud pole and a pin pounded into the grassy bank. The local ducks came over to guard our mooring line as we relaxed with a bottle of rosé to revive us from the day’s twenty-one kilometres and eight locks. 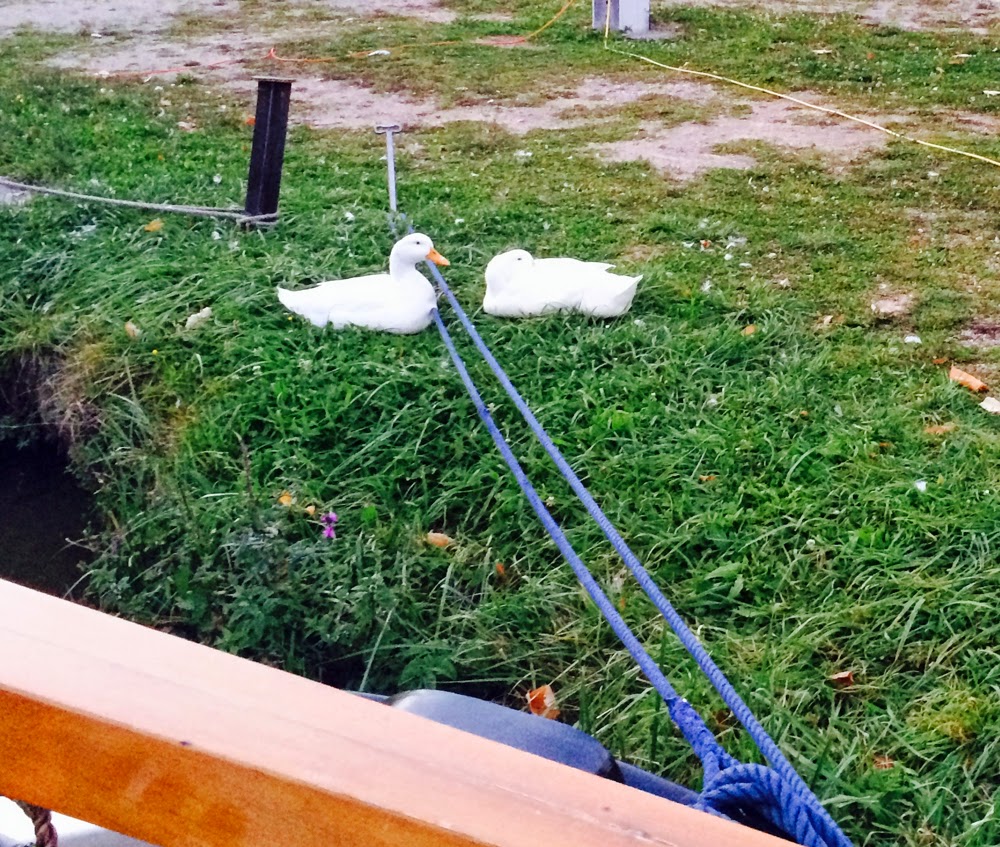 We plugged into the electrical pylon and filled our tanks with water, but nobody came to collect moorage fees, and we could see no port office nor any indication of where one might be. The ducks settled-in with their guard duty. 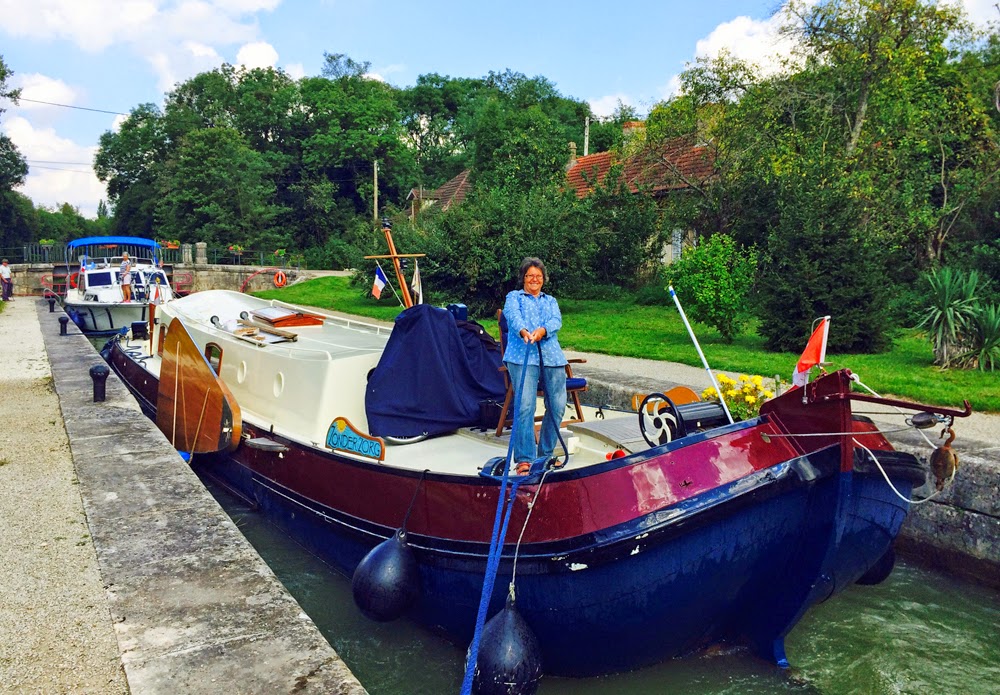 On Thursday morning we worked our way through seven locks on our own to Cry-sur-Armançon before we picked-up another boat to accompany us in the chambers. Fortunately, it was a private boat, and the owners were experienced, so we moved through the locks efficiently. 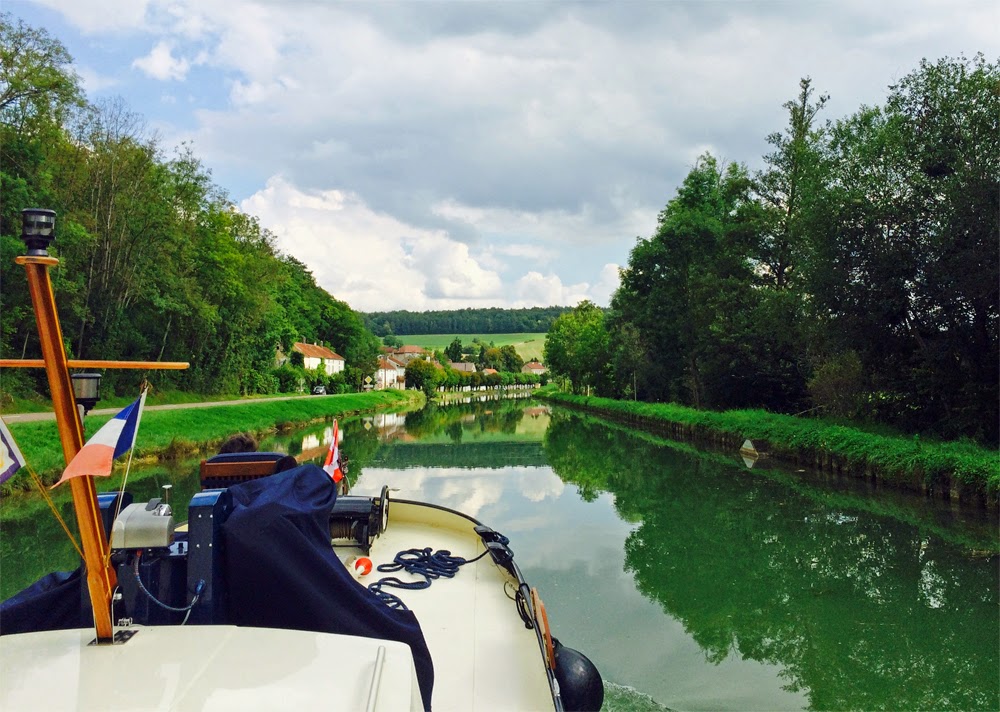 We wound along through very pleasant rural settings with a scattering of small villages. Most of these are many centuries older than the canal and had been built along the course of the Armançon River. The canal followed beside its course when it was built in the 1820s and 30s. After a total of twenty-nine kilometres and sixteen locks, in the late afternoon we moored in Montbard. 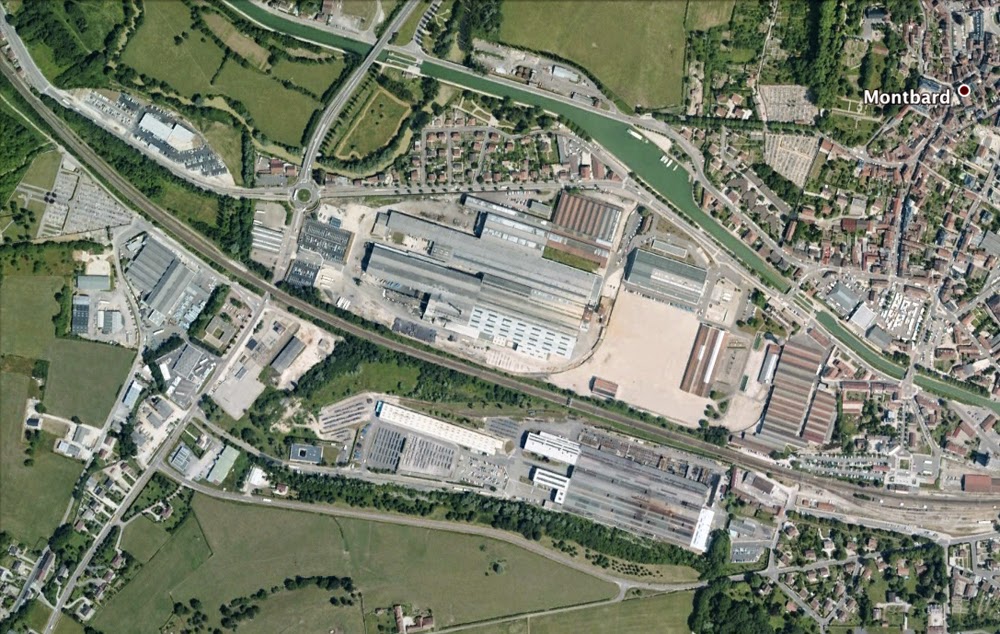 Our moorage was in the centre of the town, across from some huge metal fabricating plants. It is difficult to find a place in the town that is not close to a metals plant, since there are nine large metallurgical companies here. From the canal, their grimy and bleak façades hide vast building complexes that are best seen from space. 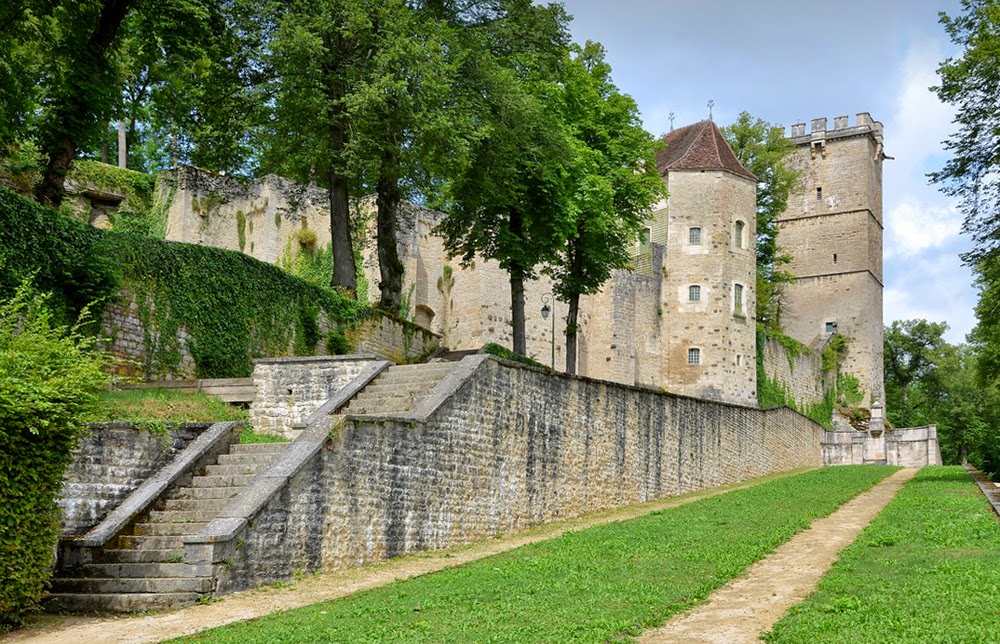 Fortunately, there are also some other sights, such as the Parc Buffon around the remnants of a tenth century château, once the property of the Dukes of Burgundy, on the hill above the centre of town. In 1733 the king authorized the young Georges-Louis Leclerc, naturalist and future Count Buffon to be the custodian of Château de Montbard and for the next two decades Buffon systematically demolished most of the château to make terraces and gardens for his exotic trees and plants. Buffon became a world renowned naturalist, mathematician, biologist, cosmologist, philosopher and writer. He is equally famous as a pioneering metallurgist and built a state-of-the-art industrial forge in the nearby village of Buffon, where he conducted experiments. 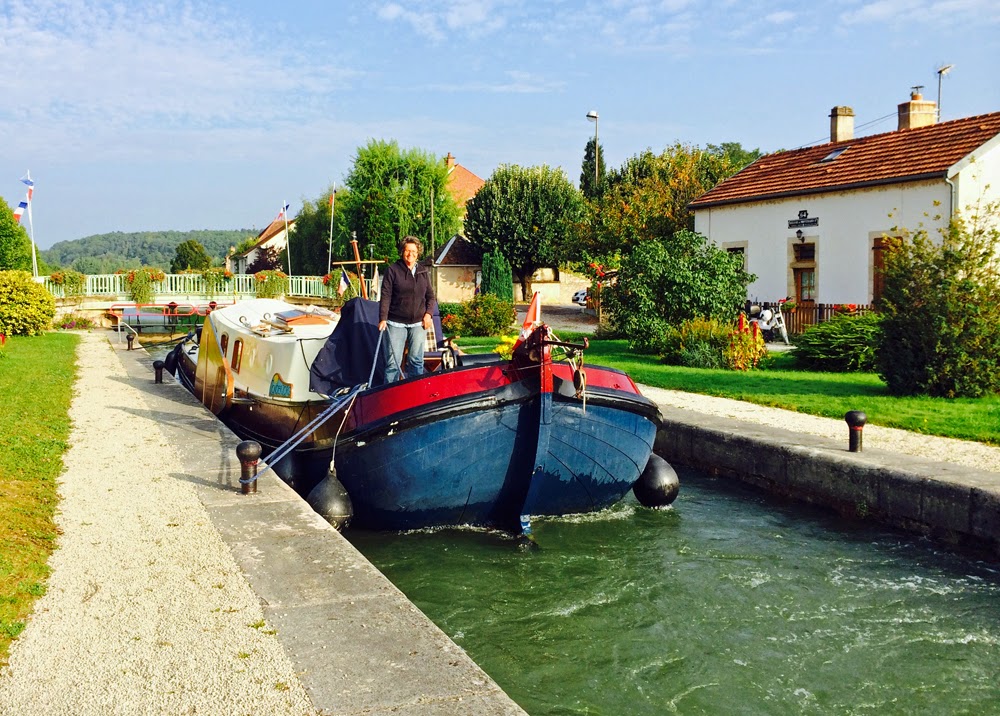 After a three-day pause to relax and replenish our fresh supplies, on Sunday morning we continued up the canal, arriving at the next lock as it opened at 0900. 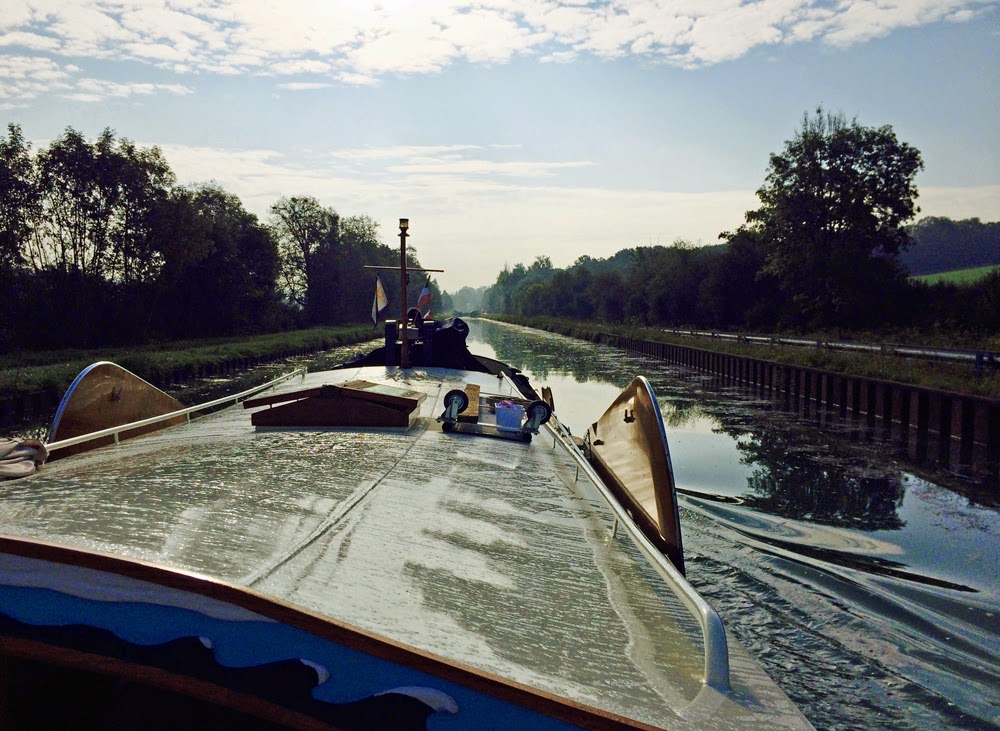 Unhampered by any other boat traffic in either direction, we moved along through placid waters in the early slanting sun. 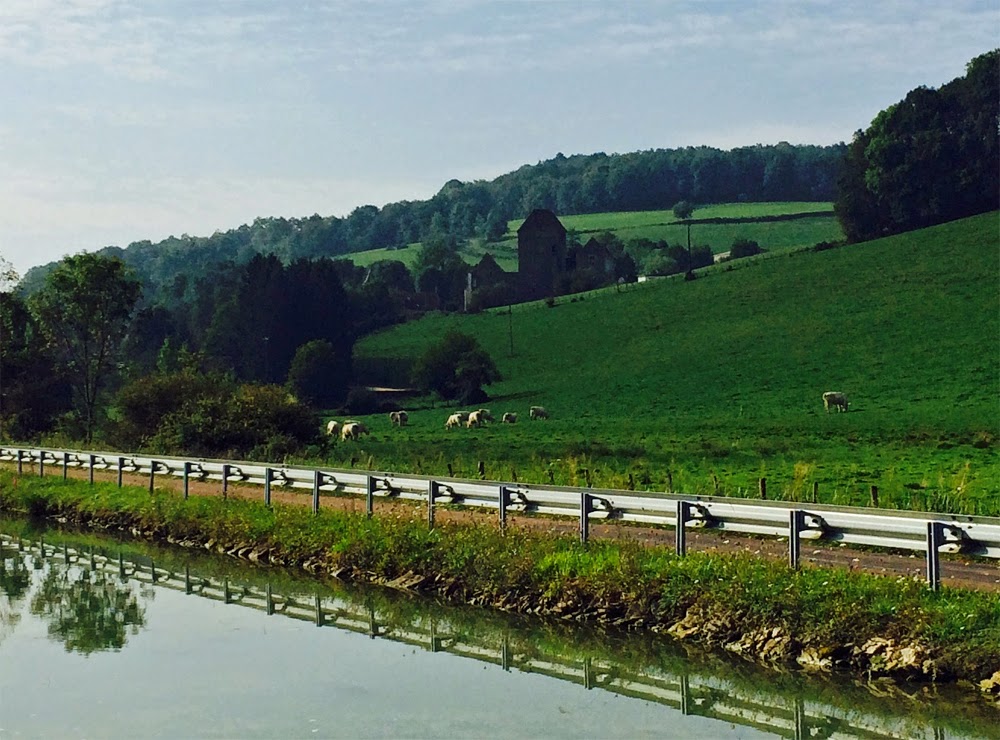 The countryside was becoming more hilly as we moved up the valley. Charolais cattle grazed in the sloping pastures, which were occasionally punctuated with ancient farm buildings and tiny villages. 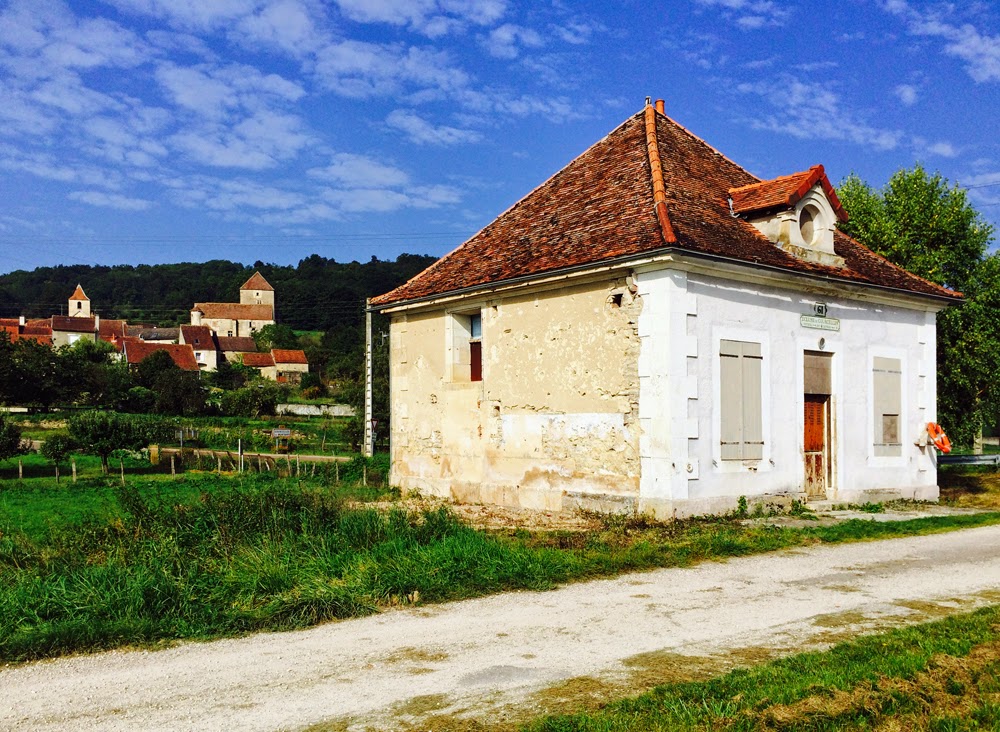 Some of the lock houses, like this one at Écluse Venarey were unoccupied and rather forlorn looking. 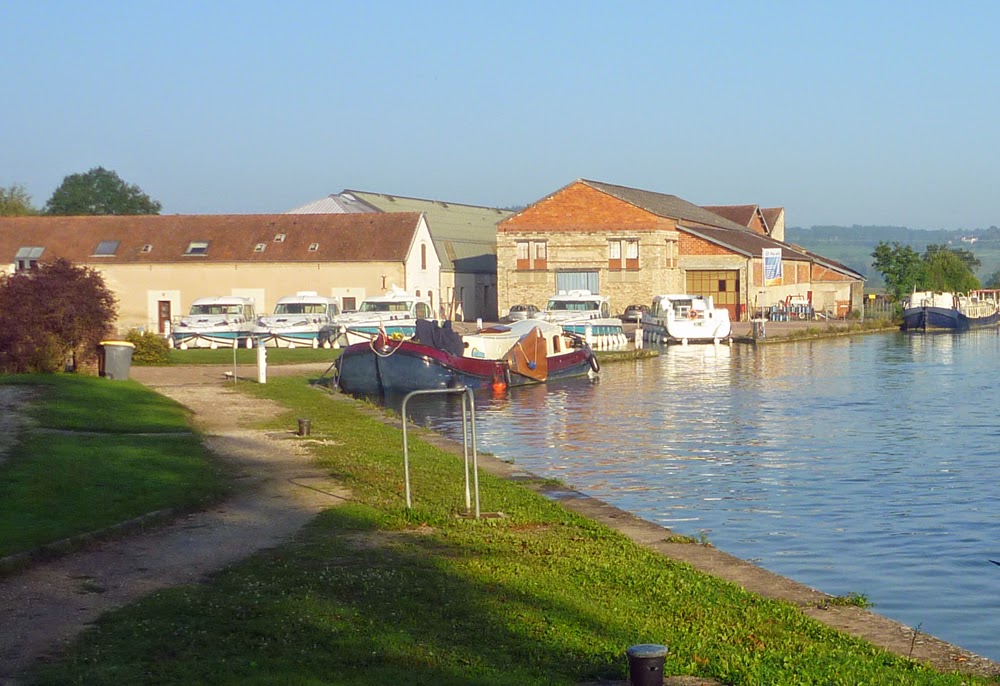 After nine locks and just short of fourteen kilometres, we decided to stop for the day in Venarey-les-Laumes. In a basin off the canal is a Nichols rental base and we were pleased to see so many boats in port, leaving that many fewer out there to endanger us. We moored along the canal bank, plugged into the shore power and topped off our water tanks. Through the remainder of the day and into the following morning when we left, we could find nobody who was interested in being paid for the moorage and services, nor anyone who knew who might be.

We had moored astern a hotel barge, which was facing up canal. On Sunday afternoon it appeared to be storing ship in preparation for departure the next morning. I had walked over and asked the skipper his intentions and was relieved to hear they were heading back downstream at 0830 Monday. We watched as the barge slipped and wore around in the turning hole. 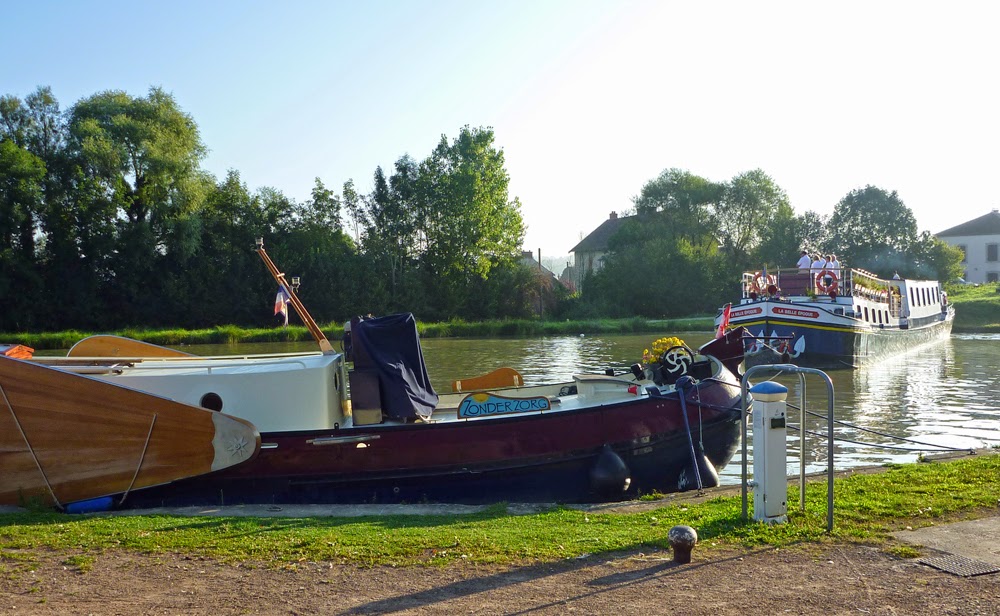 As they were maneuvering, we prepared to continue up canal. 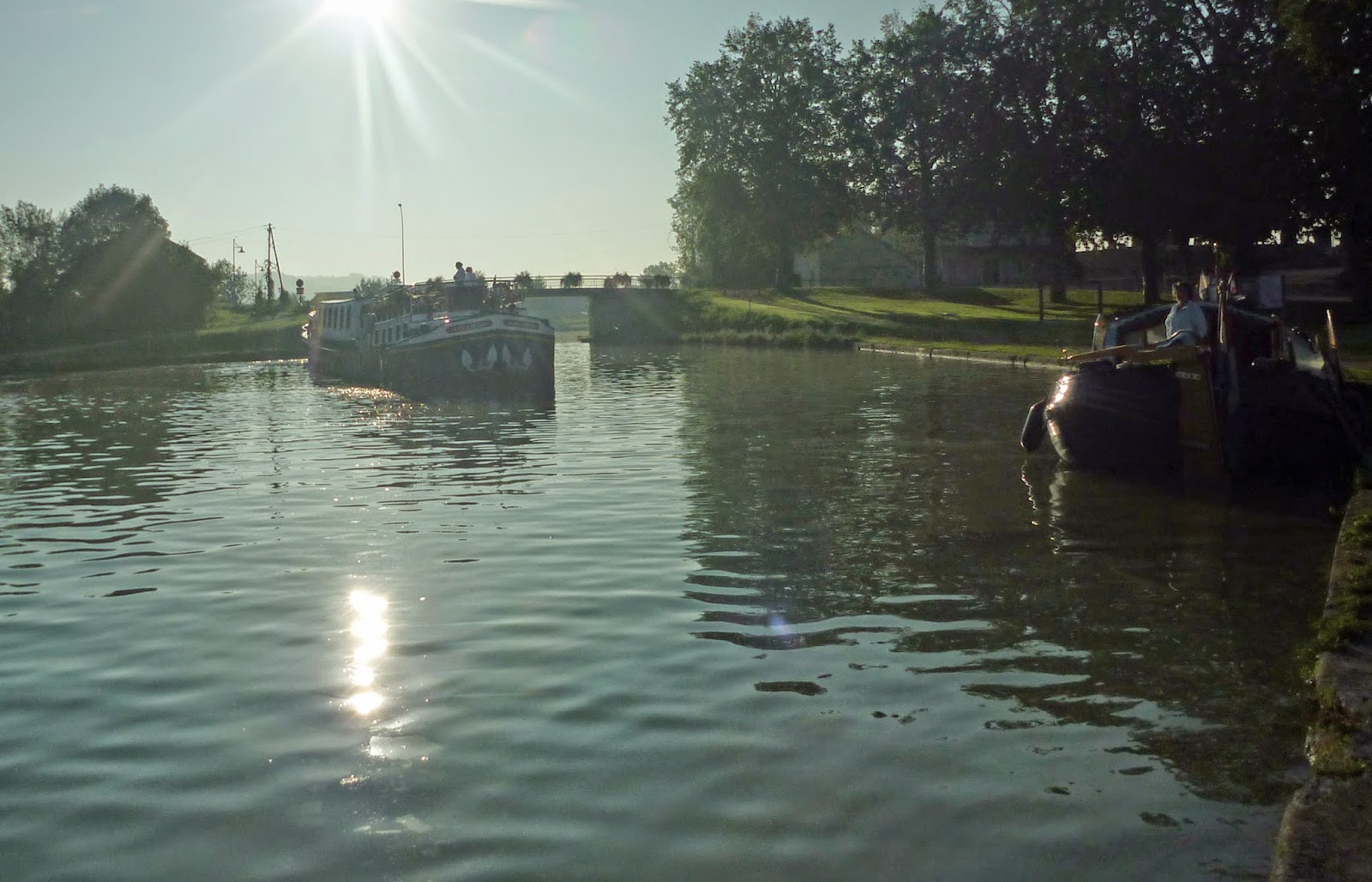 Shortly after they had passed, at 0850 we slipped and headed toward the next lock. We were about to begin a steep ascent with forty locks in twenty-four kilometres. 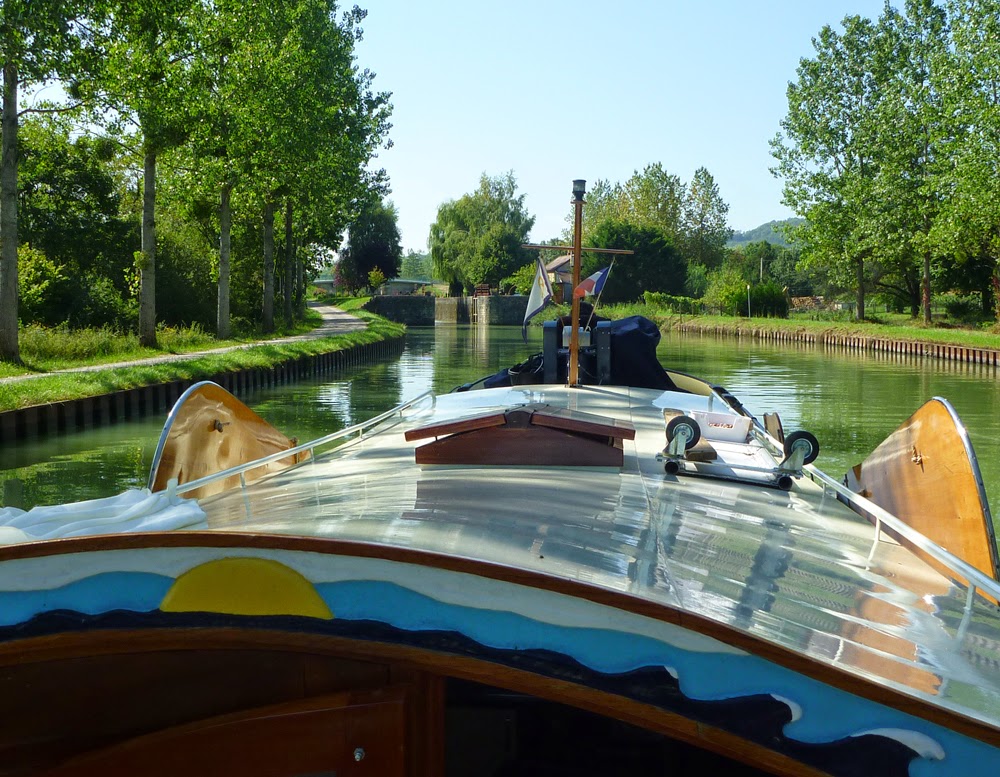 Fortunately we were on our own again in the locks, and the passages all went smoothly and quickly. 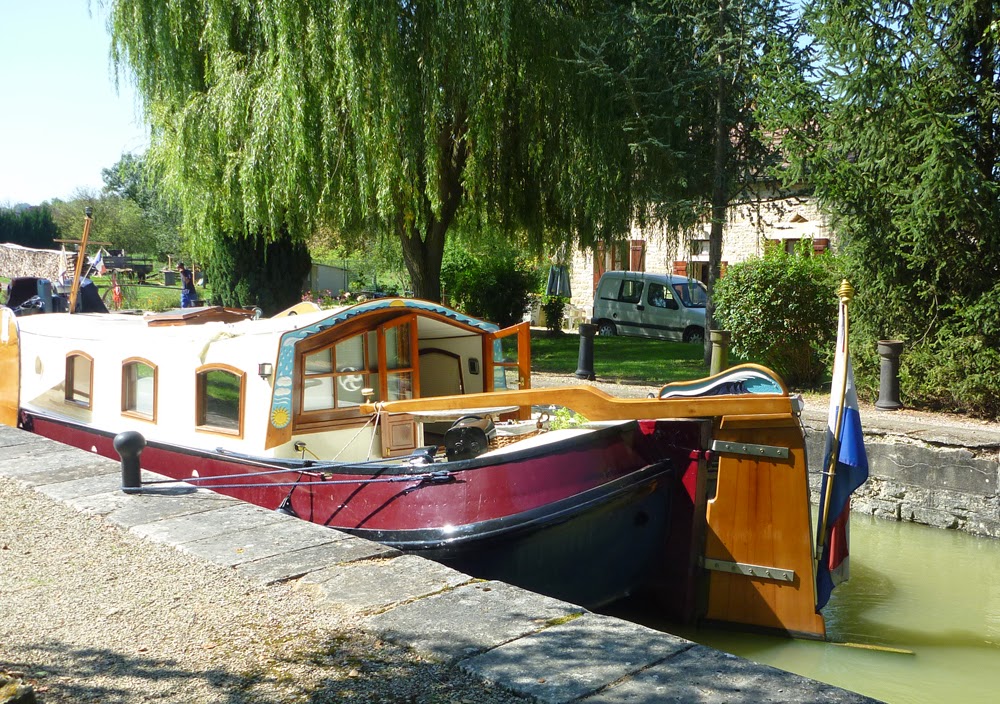 Shortly before noon, after only 4.6 kilometres we arrived at Écluse Pont de Pouillenay, our tenth lock of the day. It was also our one-thousandth lock in Zonder Zorg. In just short of two years since we left Aalsmeer, Noord Holland on our maiden voyage, we had been through one thousand locks. 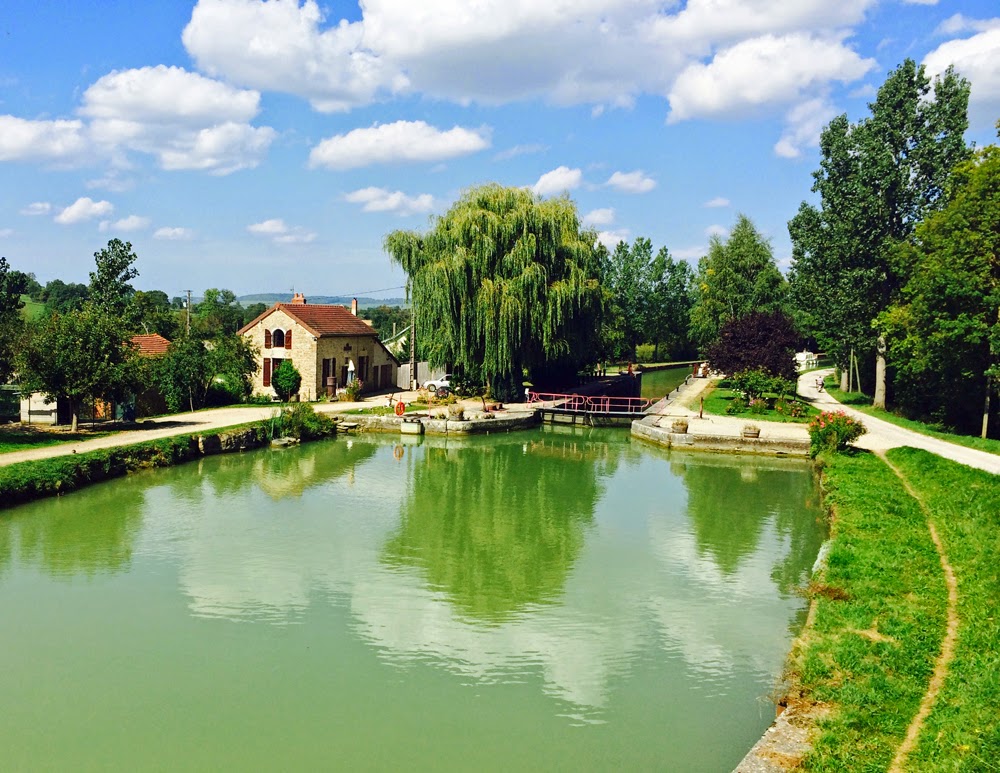 There is a good mooring basin just above Écluse Pont de Pouillenay, which is a standard stopping place before the next steep series of locks and we had decided to stop there for the day. The guide shows an épicerie and a boulangerie in the village of Pouillenay the better part of a kilometre east of the canal. We waited aboard giving the shops ample time to reopen after the noon break and then walked across the bridge overlooking the lock and continued into town. 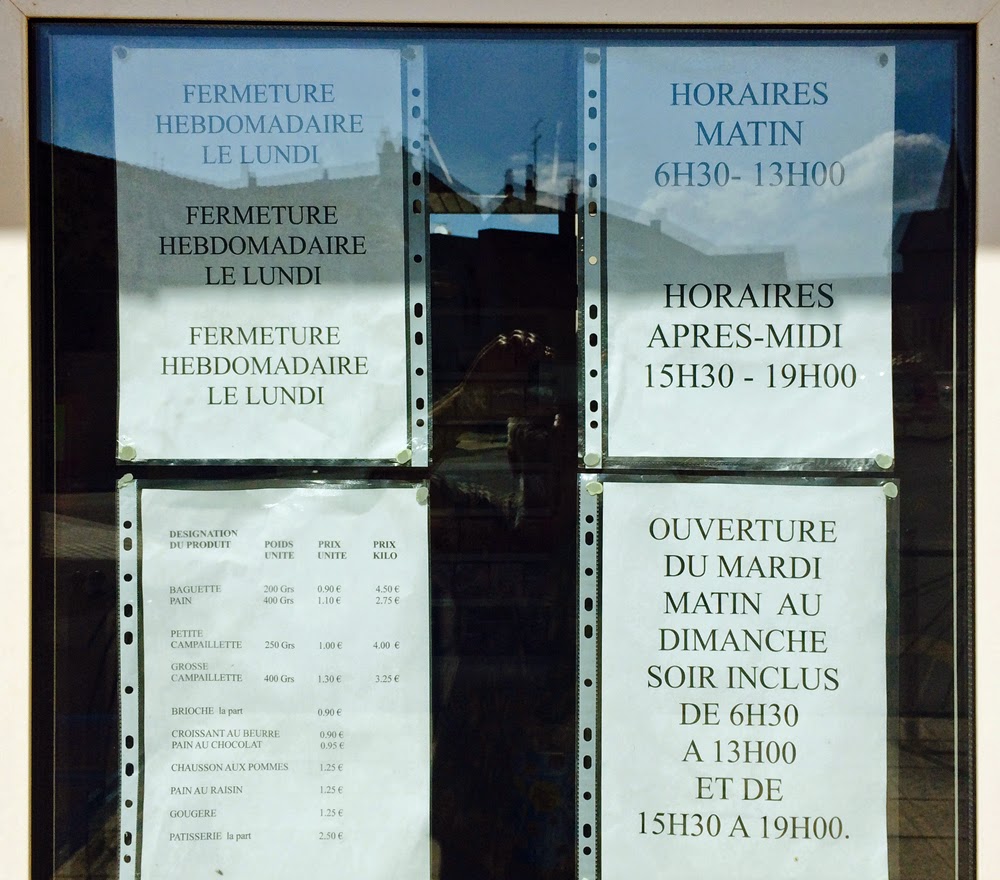 We arrived at the épicerie to see signs in its window indicating Fermature Hebodomadaire le Lundi, its weekly closing day is Monday. We wandered the tiny hamlet looking for the bakery and finally found a man who directed us back to l’épicerie, saying it was the only retail business remaining in the village; it does everything. We walked back to Zonder Zorg empty-handed. 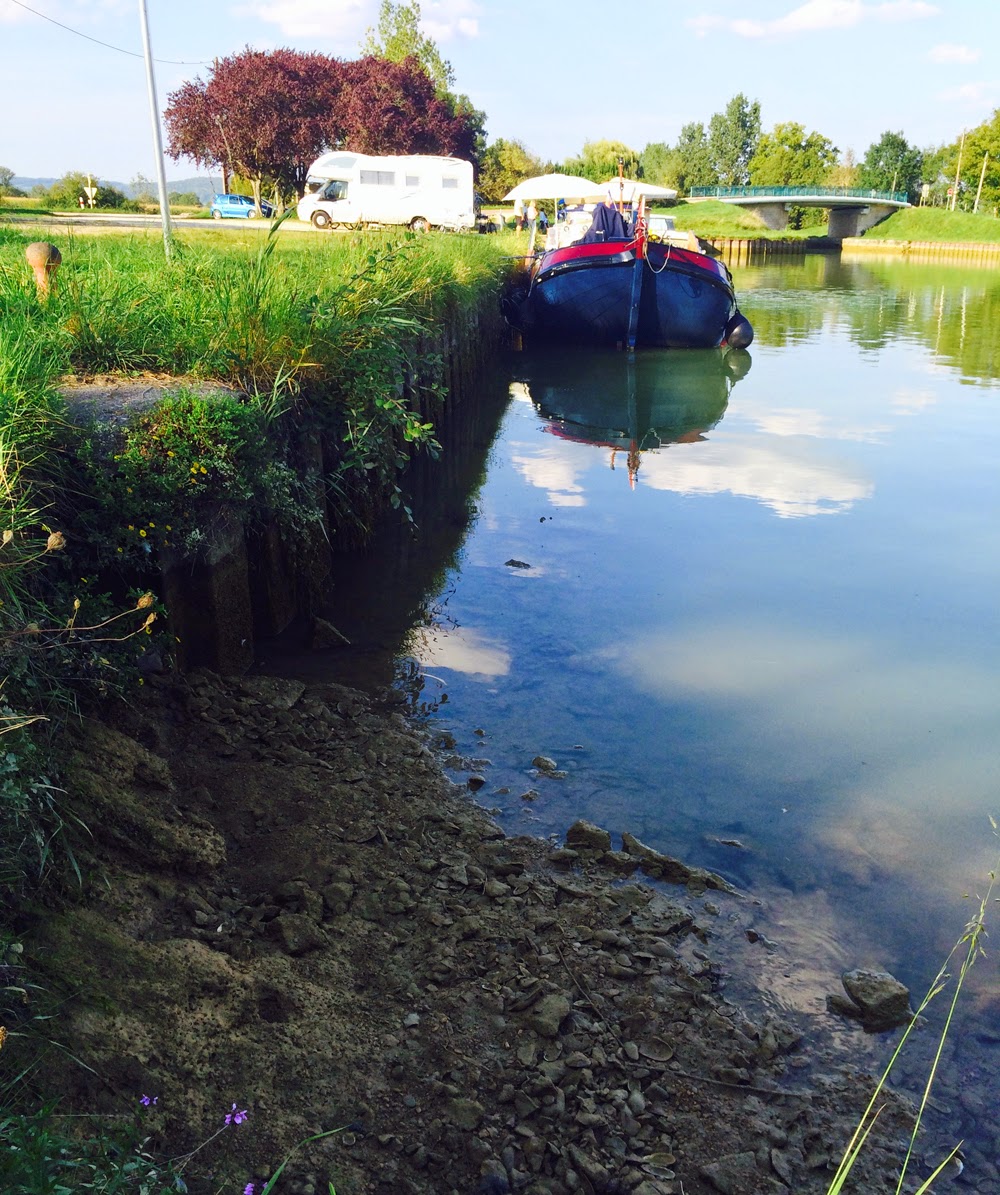 In the late afternoon we began taking on a list to port. After a quick check of the bilges, I realized we were aground; the water level in the pound had quickly receded and was nearly forty centimetres down by the time we noticed it. Our starboard side was on the sloping bottom. 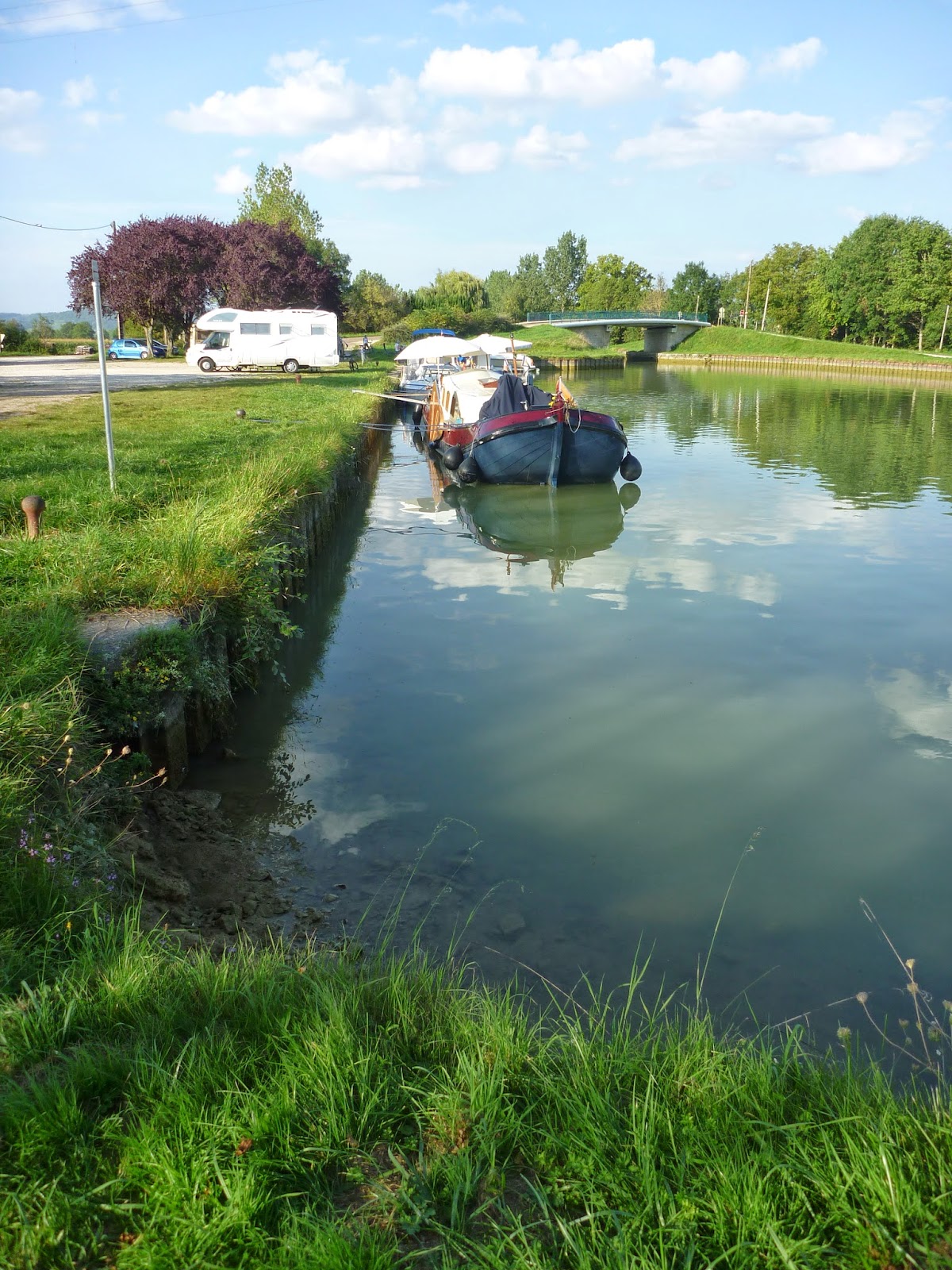 I phoned the VNF office to report the water level problem and then we set about getting Zonder Zorg off the bottom and away from the sloping bank. We loosened the mooring lines and I gave the bow thruster a long kick to port. The bow slowly swung out away from the bank. When it was a good metre off, I dropped the spud pole. We rocked the barge and slowly pushed the stern off the crud and away from the bank. Once we were in deeper water, we held the stern off with the gang plank tensioned against a line to a bollard. 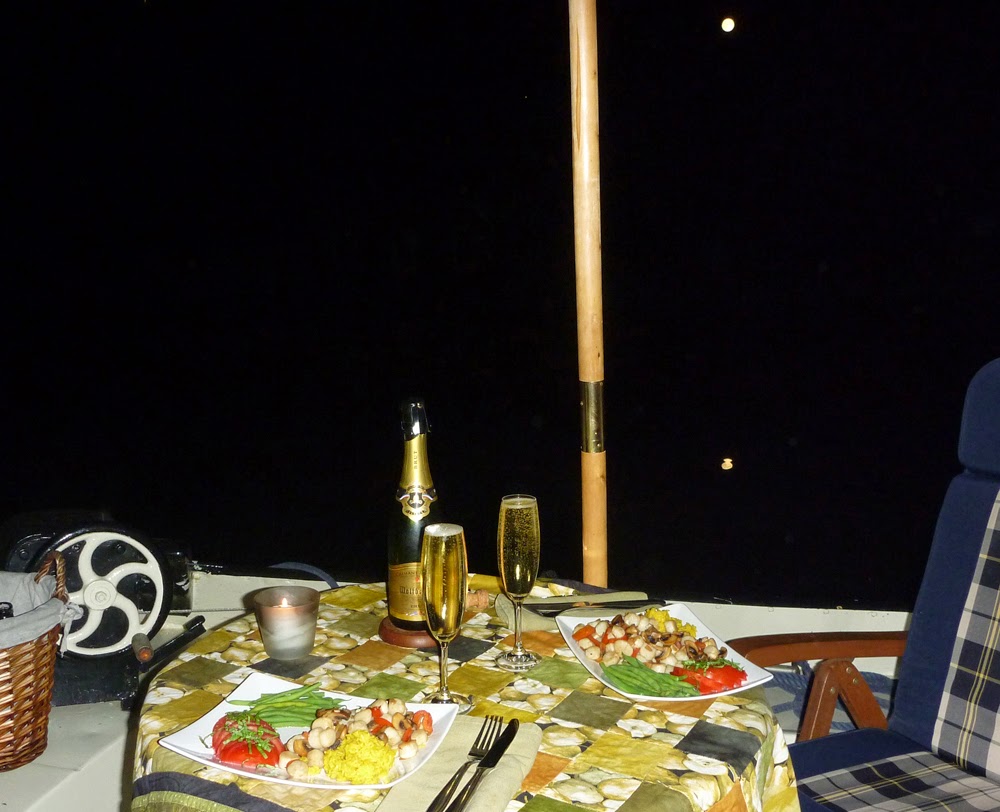 With the excitement of a spontaneous grounding over, we relaxed. In the evening to celebrate our thousandth lock, I prepared scallops sautéed in Normandy butter with diced shallots, garlic and red peppers with a liberal splash of Bas Armagnac served on a bed of saffron basmati rice. The Wolfenberg Crémant d'Alsace complemented the meal splendidly and the full moon added to the occasion. We were looking forward to our next thousand.
Posted by Zonder Zorg at 00:22