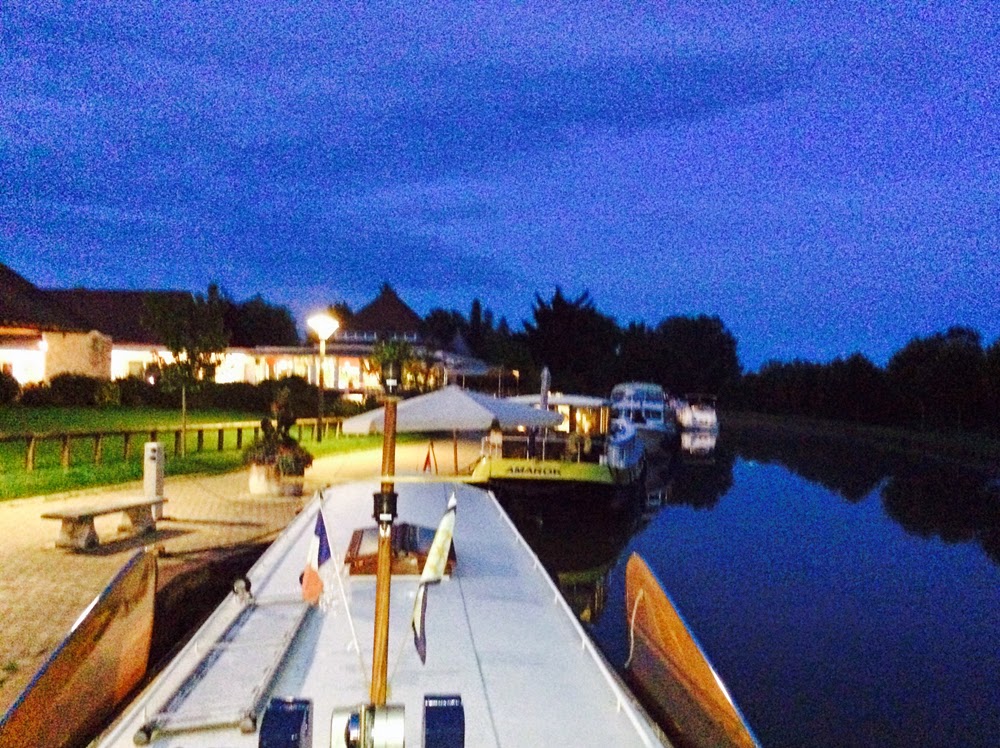 Early on Saturday afternoon, 2 August we had entered le Canal du Centre, passed through the first lock and stopped for the day in Fragnes. We had expected the halte nautique to be crowded; we were on one of the most popular canals in France. Also, it was the beginning of August when most of France heads out on vacation and the rental boats are notoriously as thick as files in a cow barn. In the marina with us was one other barge and through the remainder of the day, one private cruiser and a rental boat came through and stopped. 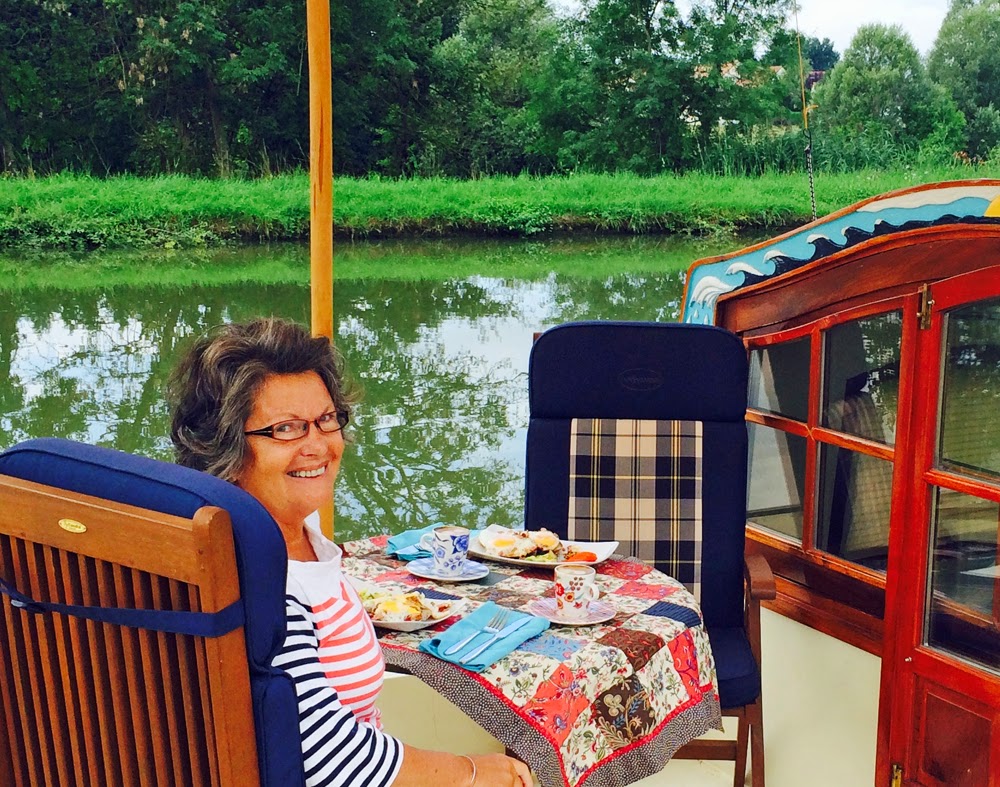 This was my sixth trip along the Canal du Centre and each time I have been delighted with the improvement in the moorage facilities in Fragnes. It is one of the nicest small town moorages in the region. The rain that had been our rather steady companion the past two weeks seemed to have taken a pause, so we enjoyed breakfast in the cockpit on Sunday morning. It was so pleasant that we decided to spend the Sunday relaxing and told l’éclusier we would continue up canal at 0900 on Monday. 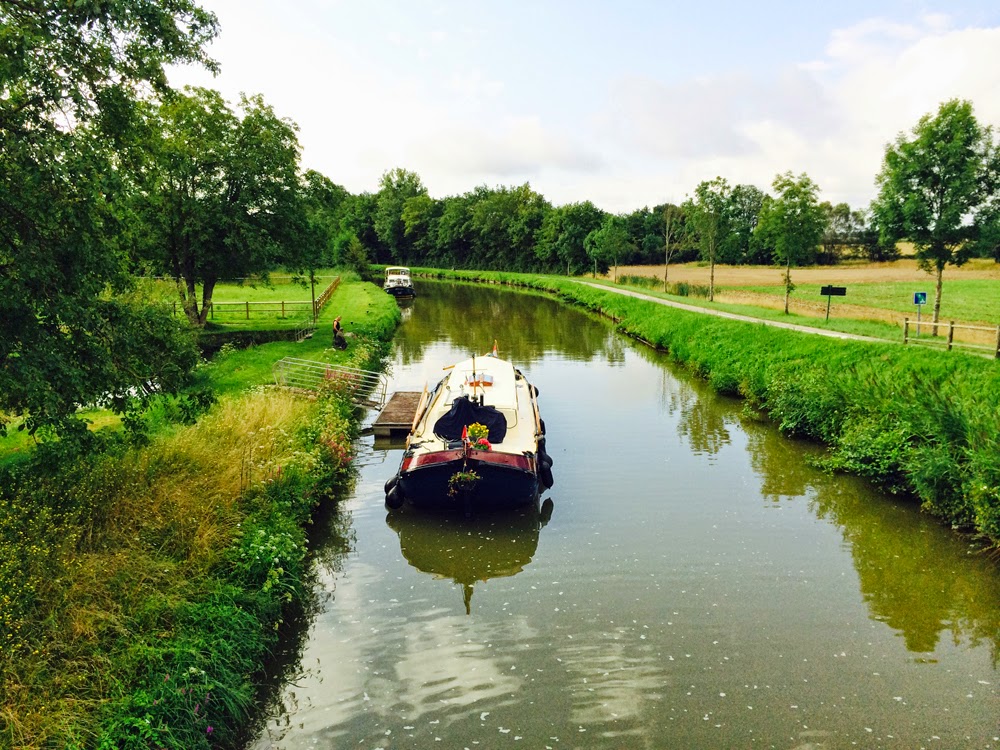 At 0850 on Monday we slipped and headed to the next lock, which was ready for us as we arrived. A couple of locks along we had to wait for a down-bound rental boat to lock through. The landing float was too small to moor on, so I looped a bollard for the stern and dropped the spud pole to stabilize the bow while we waited. Another boat came up astern of us as we were waiting and we invited it into the lock with us once the rental had bounced its way out of the chamber and zigzagged past us we. 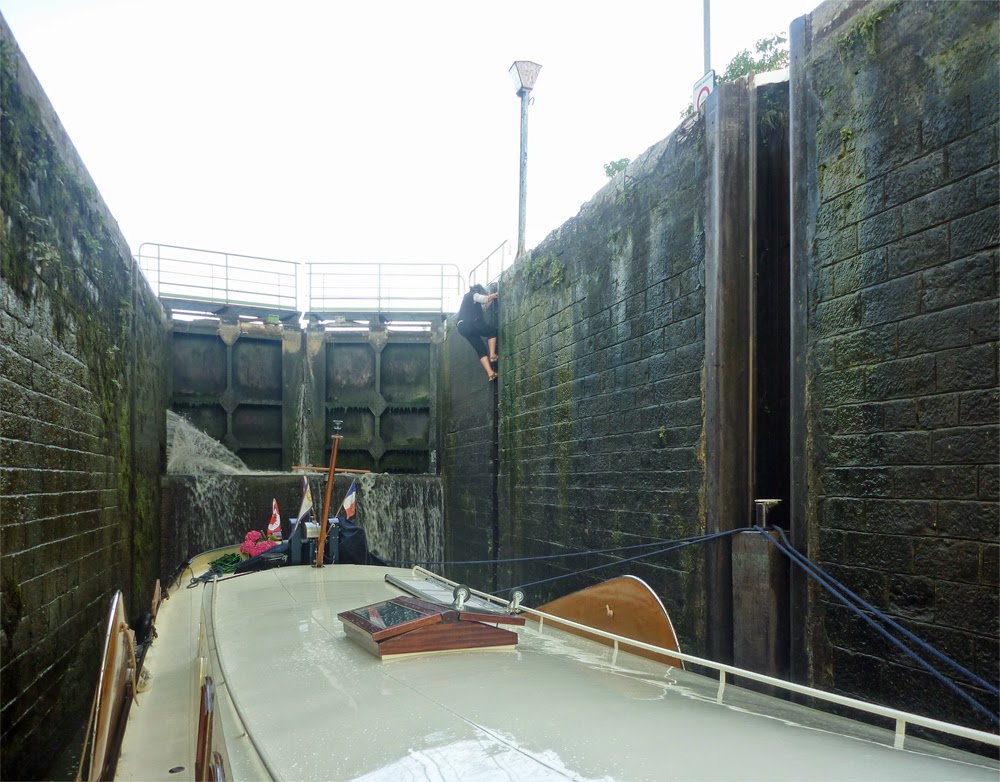 The eleven locks between Fragnes and Chagny are a mixed bag of heights, ranging from 1.83 to 5.80 metres, with five of them above 5 metres high. These high ones have floating bollards, so it is easy to secure in the chamber. However, to activate the lock, a blue cord dangling from a chamber-side pole has to be pulled. This worked well until we arrived at a lock in which the cord was broken and didn’t reach below the lip of the chamber. Edi had to climb the slimy ladder to reach the end of the cord. 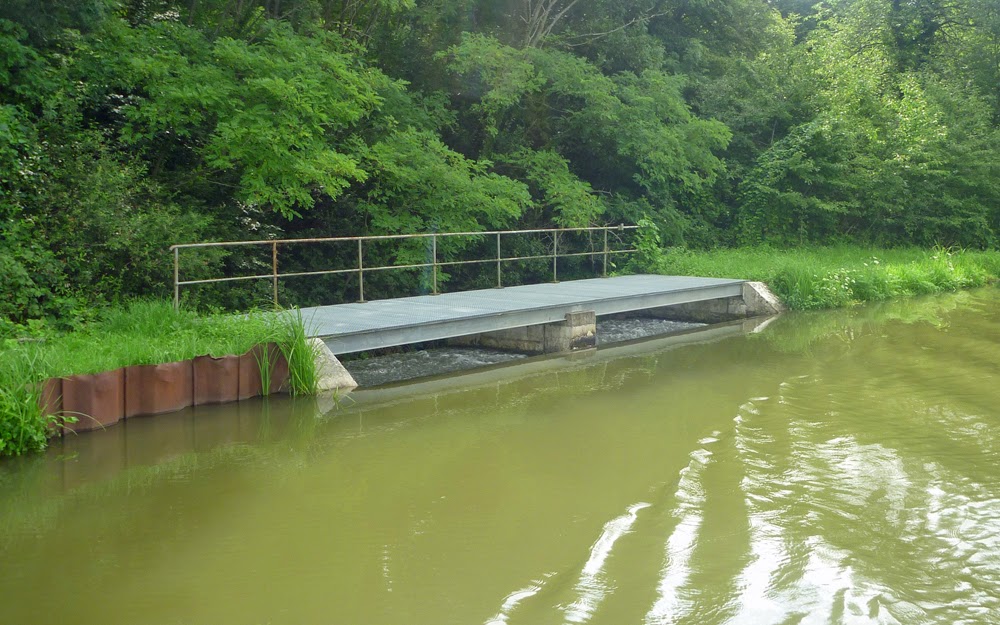 There had been warnings that the canal would be closed before the end of August, possibly as soon as mid-month because of a lack of water in the reservoirs feeding the upper locks and the summit pound. We spoke with l’éclusier for confirmation, who told us the traffic had been light and the rains heavy; there was sufficient water that if properly managed would last to the end of August. In the pounds between the locks we saw many spillways where excess water was being bled from the canal in large, steady flows, so the water shortage story seemed a bit strange. 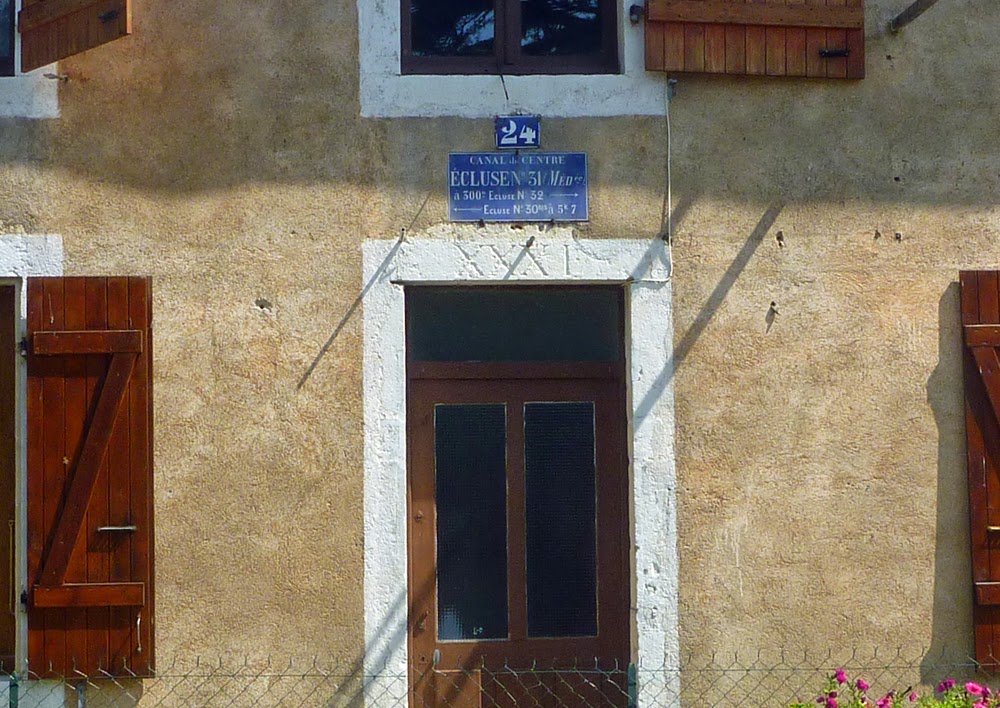 At the eleventh and final lock in the series to Chagny, the numbering on the lock house was rather confusing. Chiseled in the door lintel is XXXI and on the sign above the door is Écluse Nº 31. Above that is a 24 plaque and in the guidebook, it is referred to as Écluse 24. The rebuilding of some of the original multiple locks into high singles has caused the renumbering. 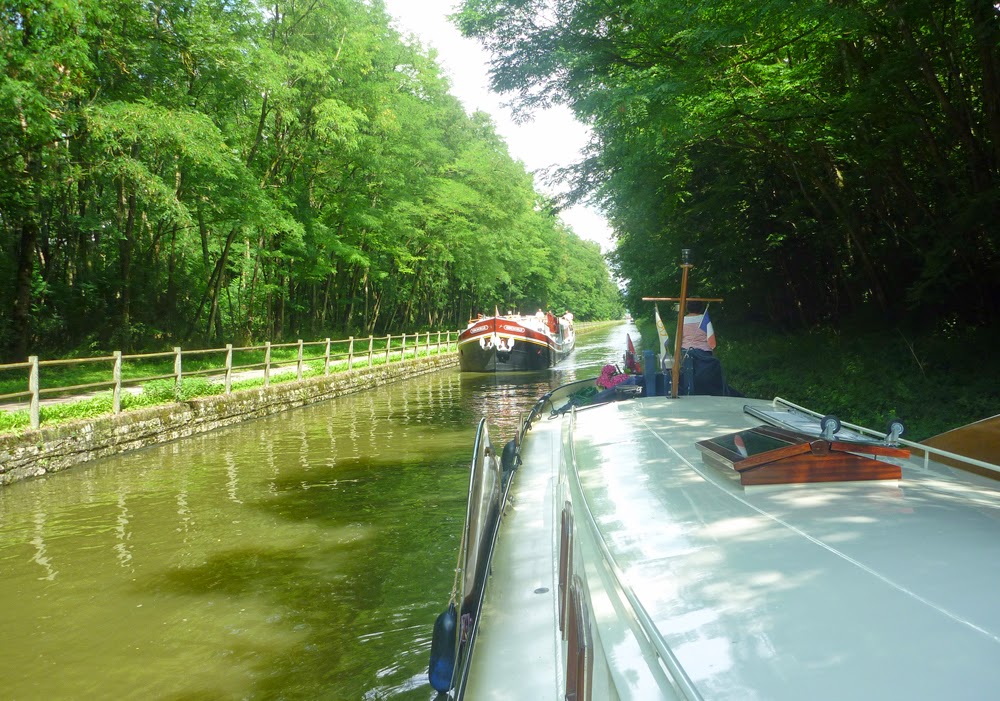 Out of the top of the lock is a narrow stretch for the final few hundred metres to the basin in Chagny. As we approached, I saw a large péniche entering from the far end. We pulled into a notch and waited as the hotel barge, Hirondelle made her way through. 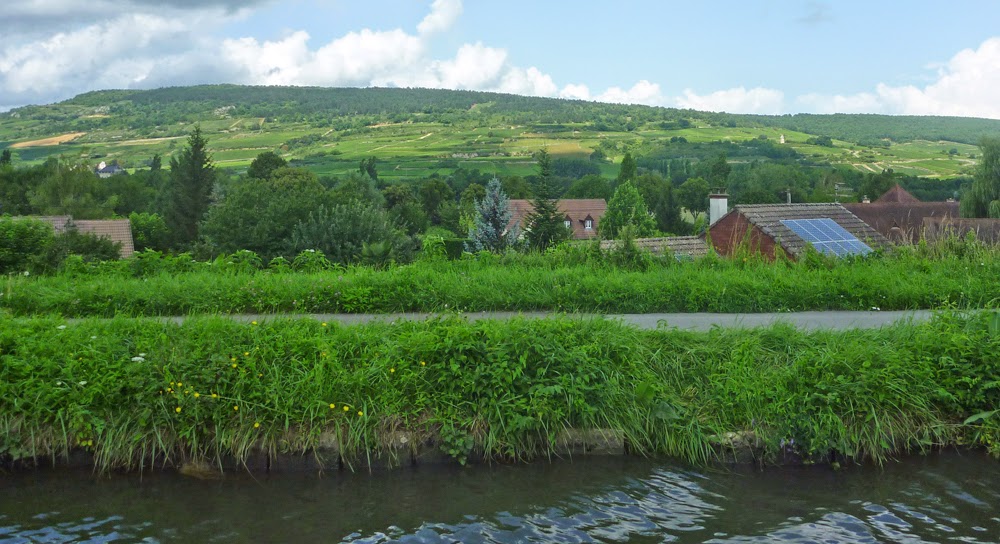 I had previously visited Chagny five times by canal, the first being in 1984 and the last in 2005. On each of the previous trips I been disappointed with the very poor facilities and the uninviting aspect of moorage. I had forced myself to put up with the ugliness of the basin twice to stop and dine at one of my favourite Michelin three-star restaurants, Lameloise a short walk away. I was hoping that in the nine years since my last visit that the town had taken a hint from Fragnes and improved the moorage. It had not. Since we had no reservations at Lameloise, we continued along the canal with a fine view of the vineyards of Cassagne-Montrachet and Santenay. 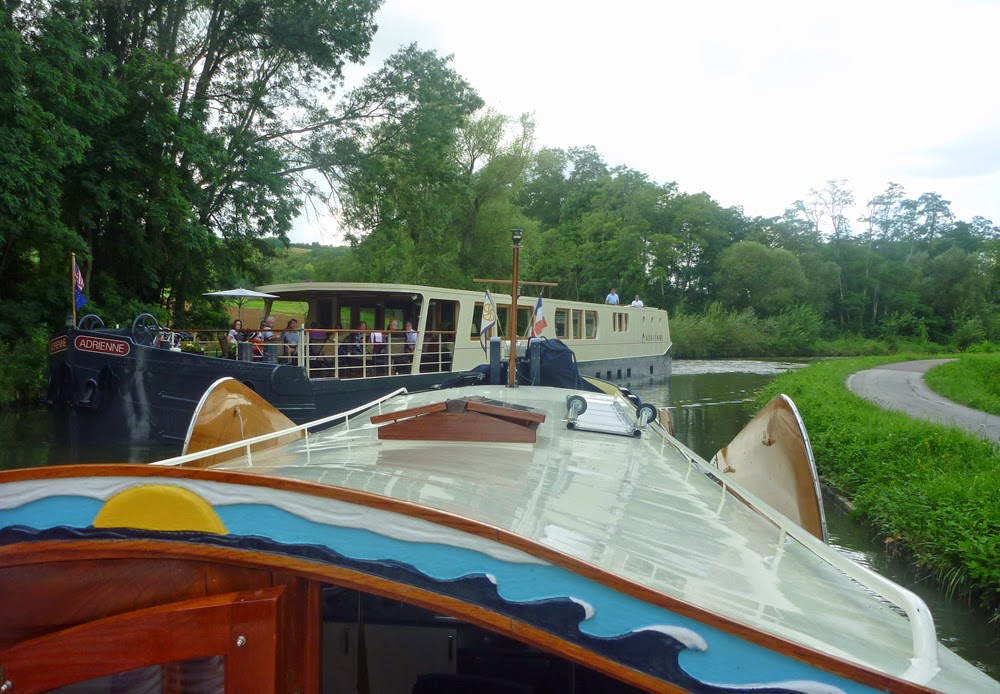 As we approached Santenay I responded to a horn blast and shortly we saw the hotel barge Adrienne coming around a tight bend. We paused before a second bend for it to slide past. 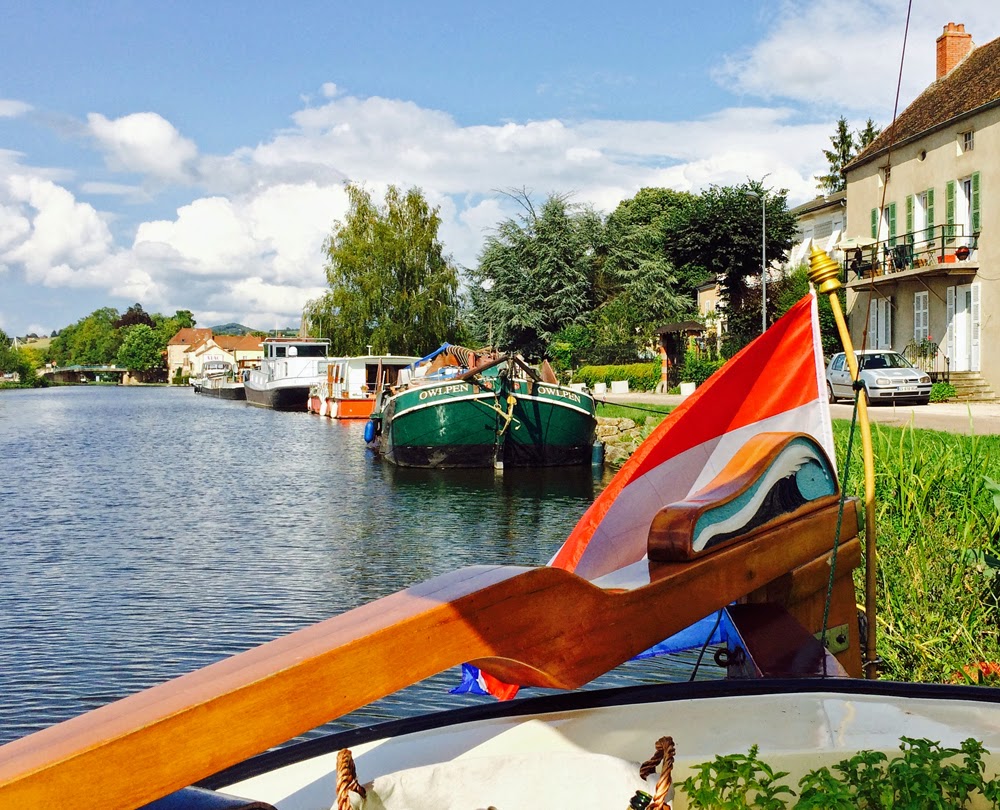 We continued along through four more locks and paused for the night in St-Léger-sur-Dheune, where I remembered a convenient supermarket from previous trips. Moored astern of us was Owlpen, a skûtsje we had looked at online when we were searching for a barge. Seeing her here in the flesh, we were delighted we had searched further. 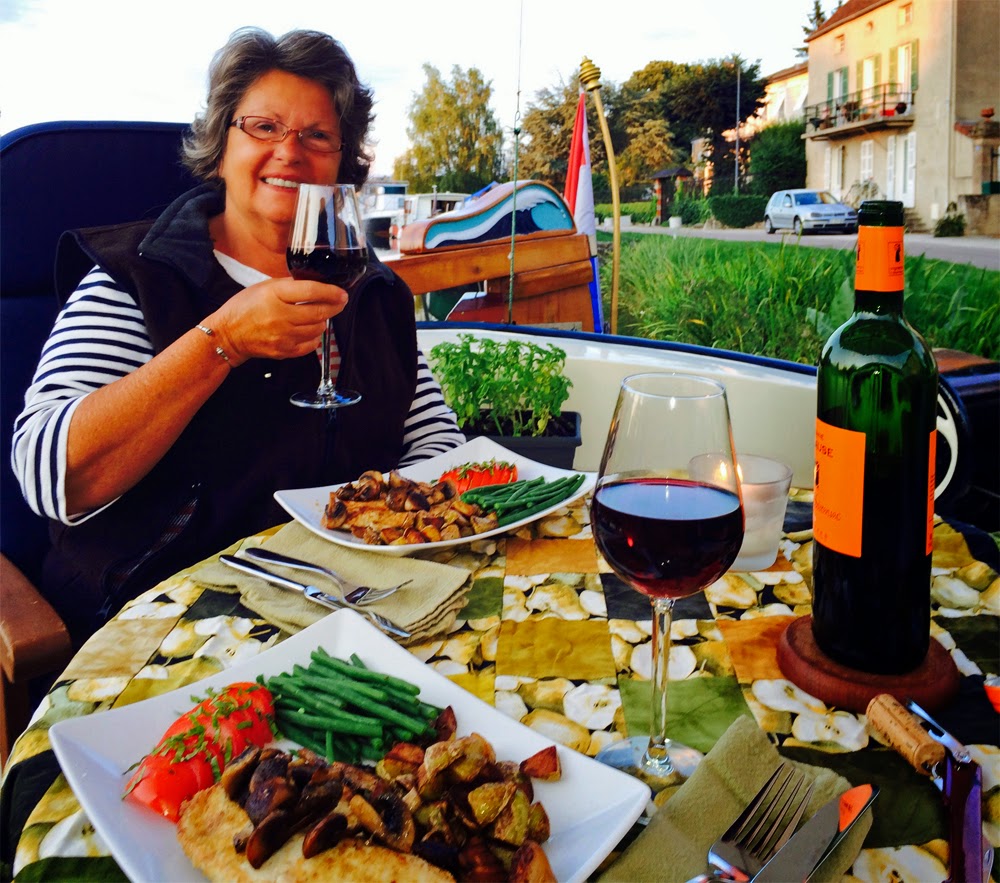 With our fresh supplies again replenished, we relaxed. In the evening we enjoyed another delicious dinner in the cockpit. 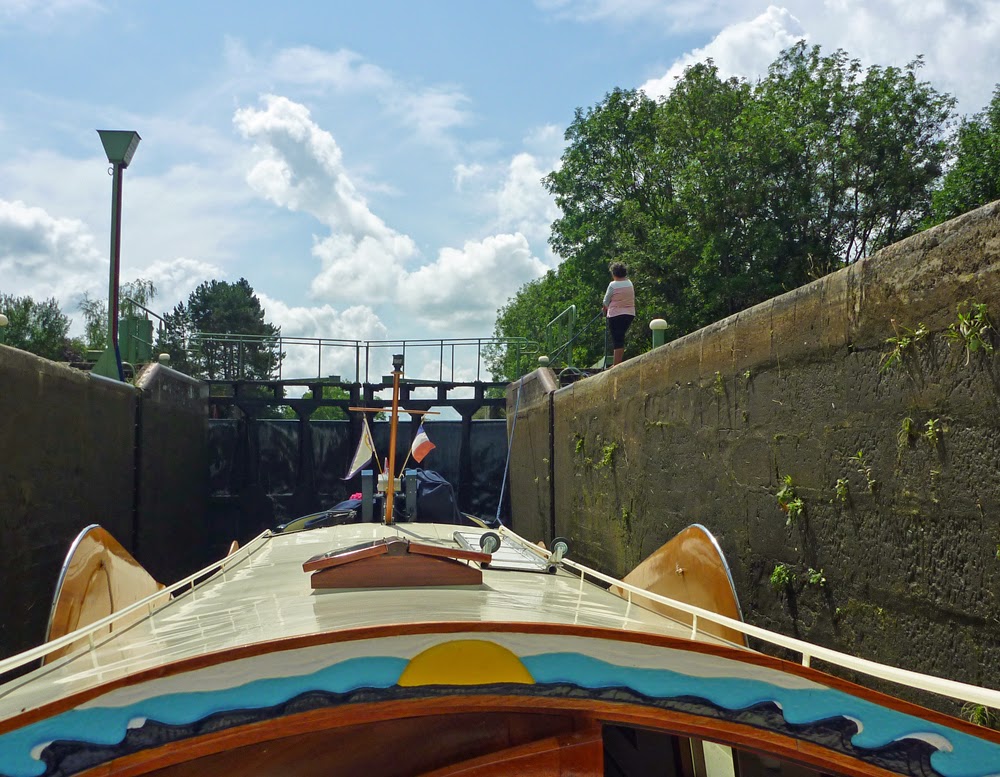 On Tuesday morning we continued up the canal. The series of locks we were now in had security fencing adjacent to the upstream gates that made it impossible to loop the bollard. We had another boat in the locks with us, so there was no choice but to use the front bollard. 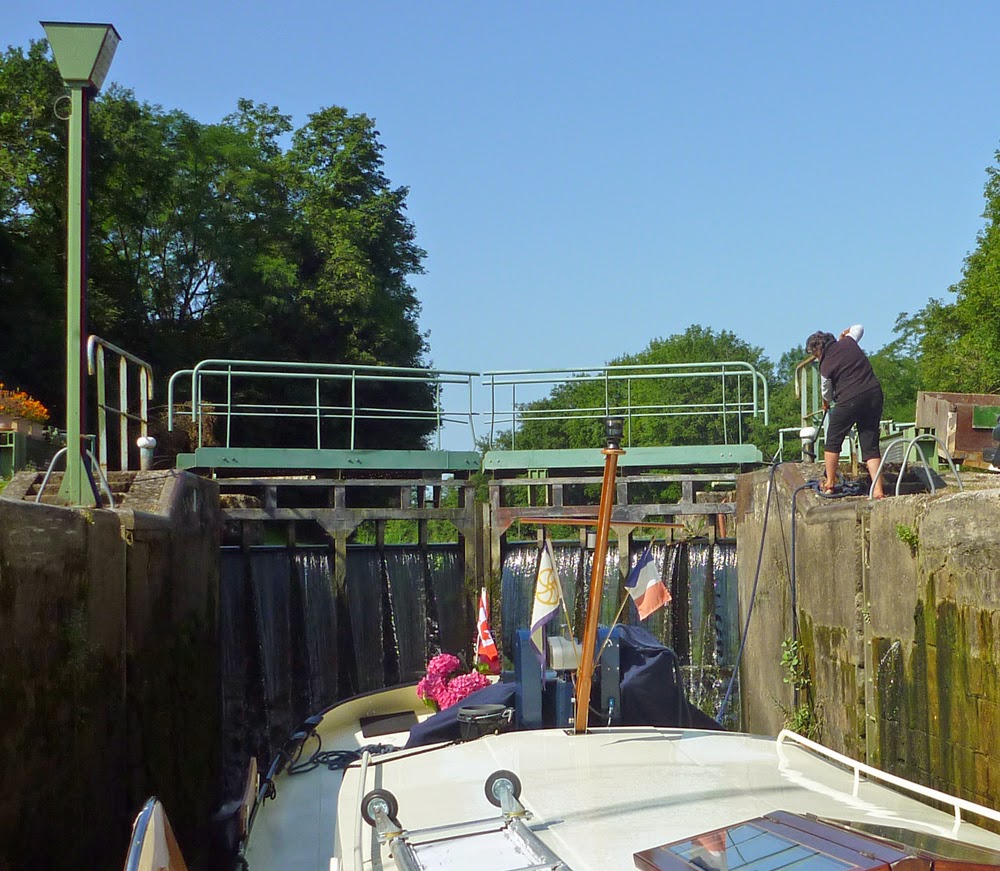 Edi had to climb the ladder and struggle to manipulate the bow line onto the bollard through the security fencing. We continued to be saddened by the deteriorated state of the canal infrastructure and amazed that the only apparent work on the locks is to make them more difficult and dangerous to use by boaters. Edi was in great danger of falling into the chamber while trying to use the only available bollard. 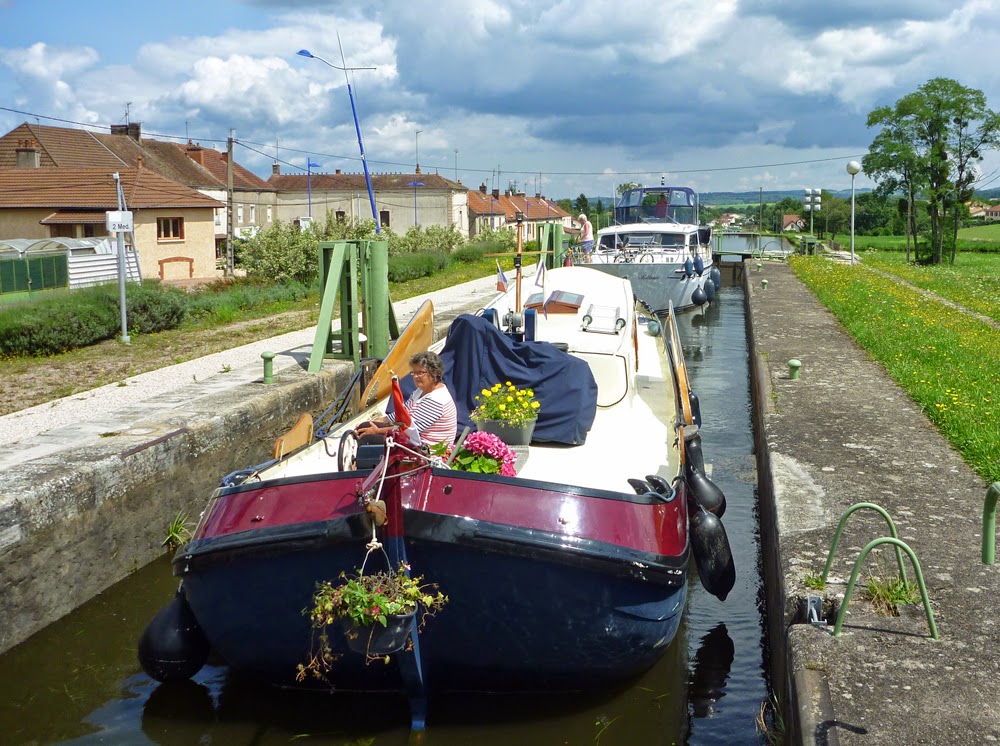 We continued up, passing a couple of moorings I had used in the past. We still felt fresh, so we kept going through the remaining nineteen locks to the summit pound, hoping that the mooring facilities had been improved in Montchanin in the nine years since my last visit. 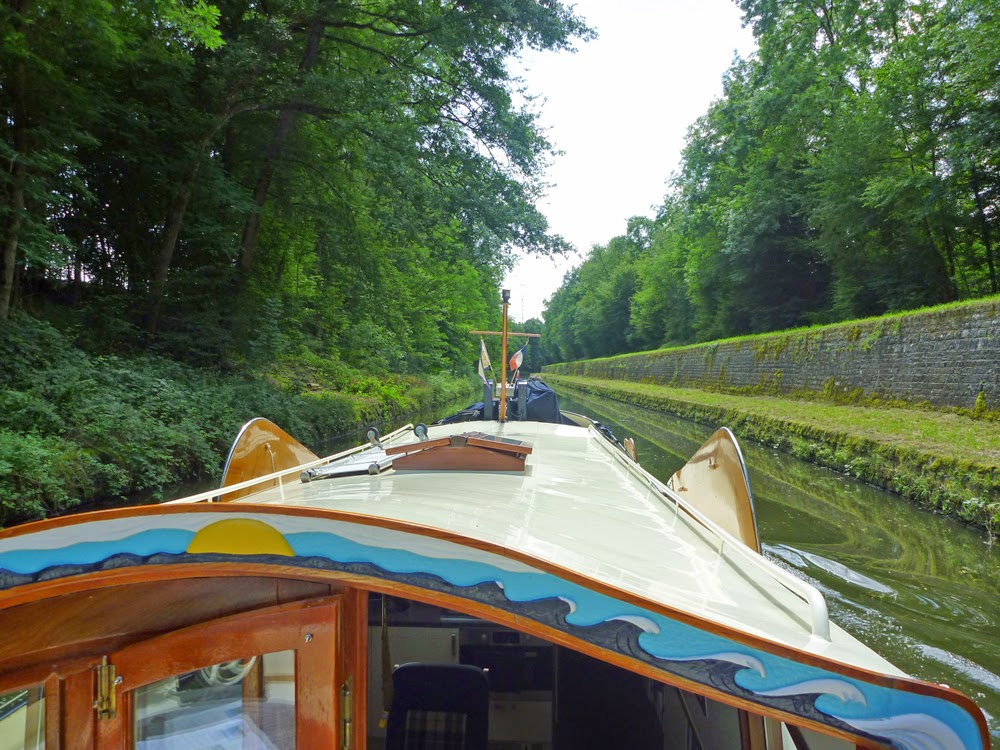 We motored along the 3.5 kilometre cut across the summit and arrived at a grubby mooring dock next to the VNF works yard. The former port across the way, instead of being upgraded, had fallen further into dereliction. 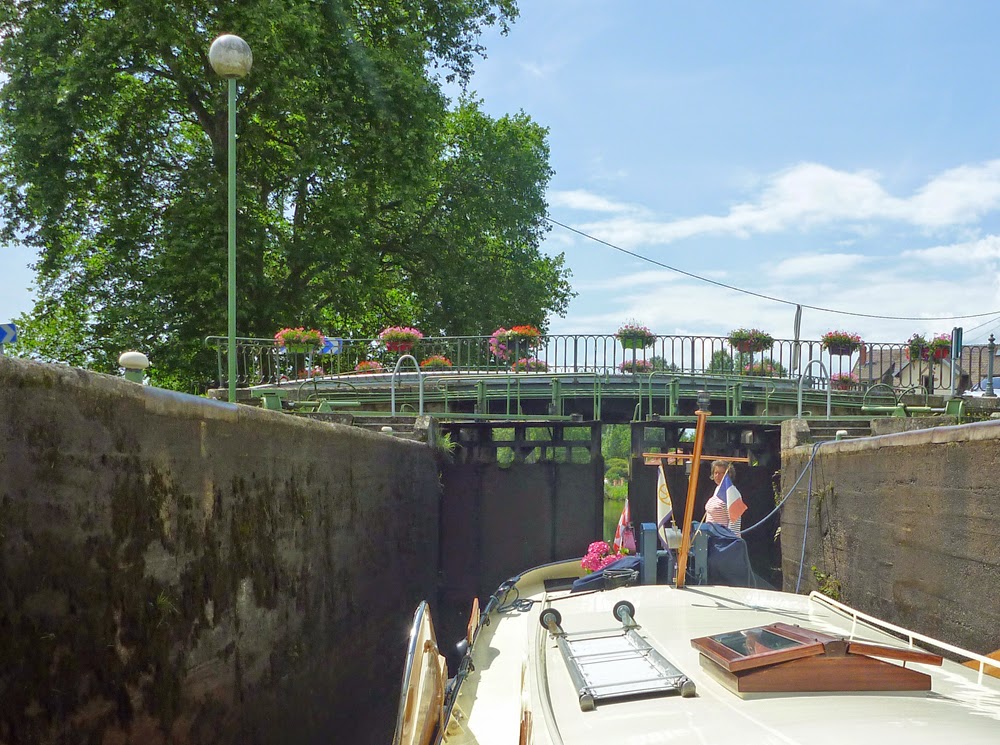 We decided to continue and began descending toward the Loire looking for a suitable place to moor. A rather busy road follows directly beside the canal and there are no peaceful settings, so after a few locks we figured that we may as well press on to Monceau-les-Mines. 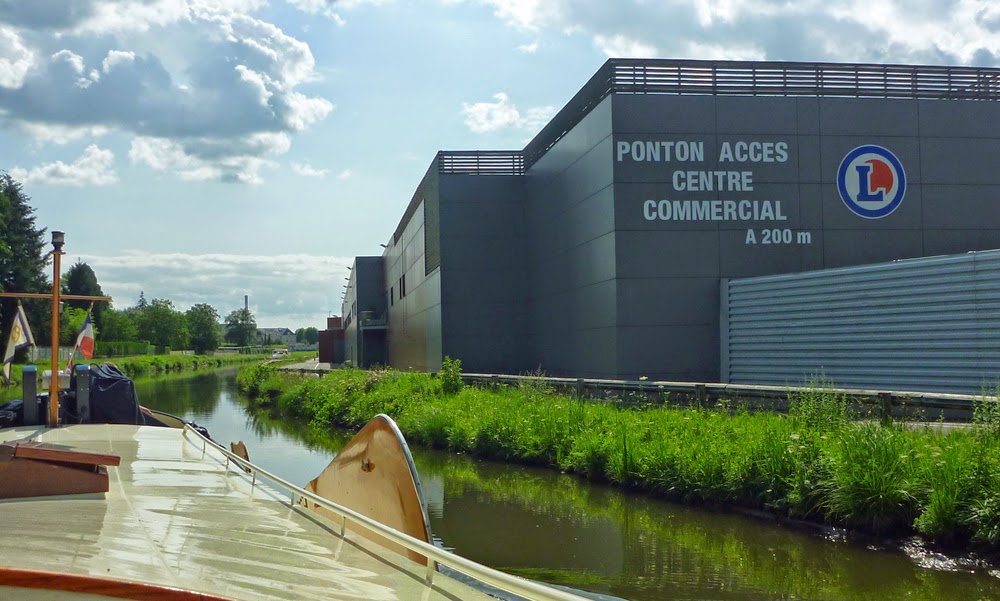 On the outskirts of town we passed the huge Leclerc shopping centre and were pleased to see that someone in their marketing department had the sense to provide not only a mooring pontoon for passing boaters, but also a huge sign indicating its presence. 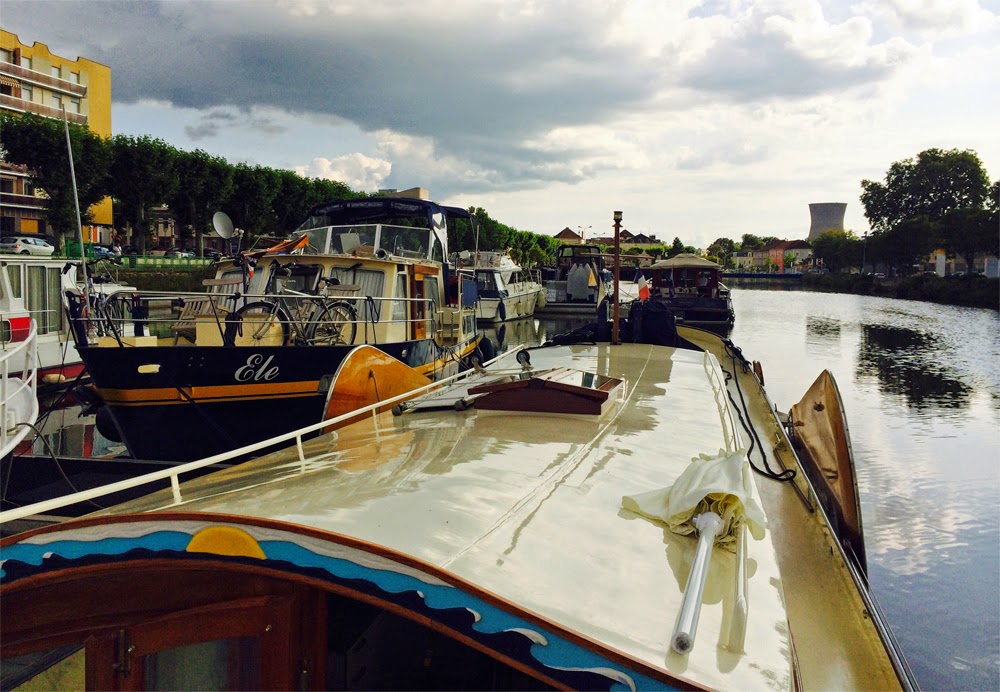 At 1700, after a day’s total of twenty-seven locks and 31.6 kilometres, we moored on a T-head in the port de plaisance in the centre of Monceau-les-Mines. 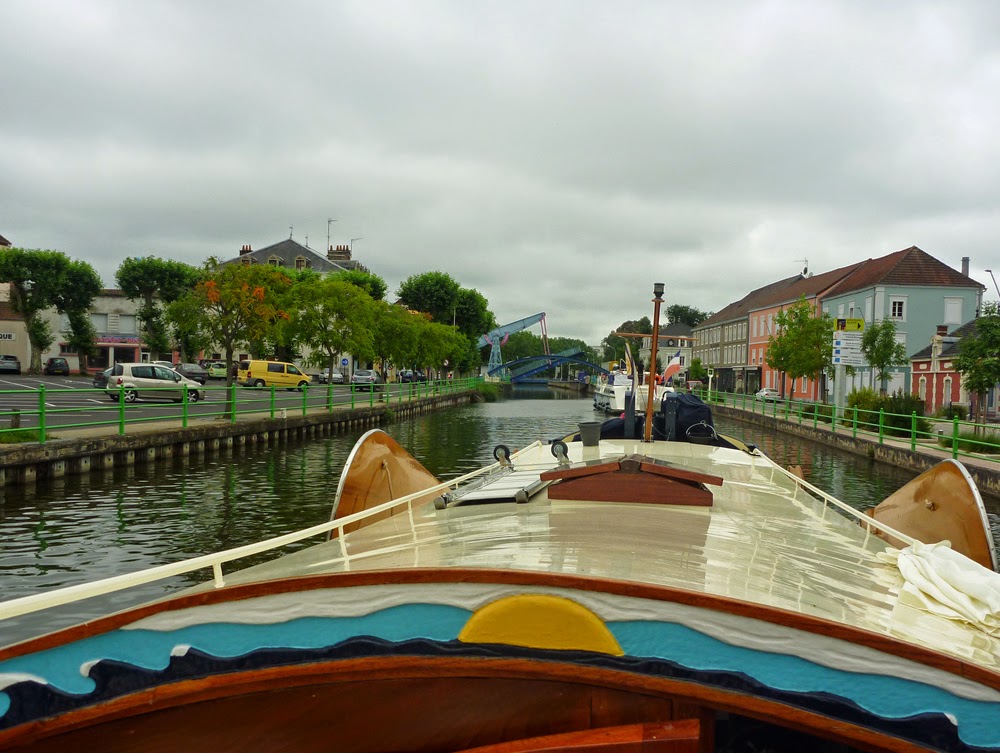 We took Wednesday off to explore the town and to refresh our pantry from the supermarket just back along the canal. At 0850 on Thursday morning we slipped and fell-in astern of two other boats to await the opening of the first two of three lift bridges leading out of town. 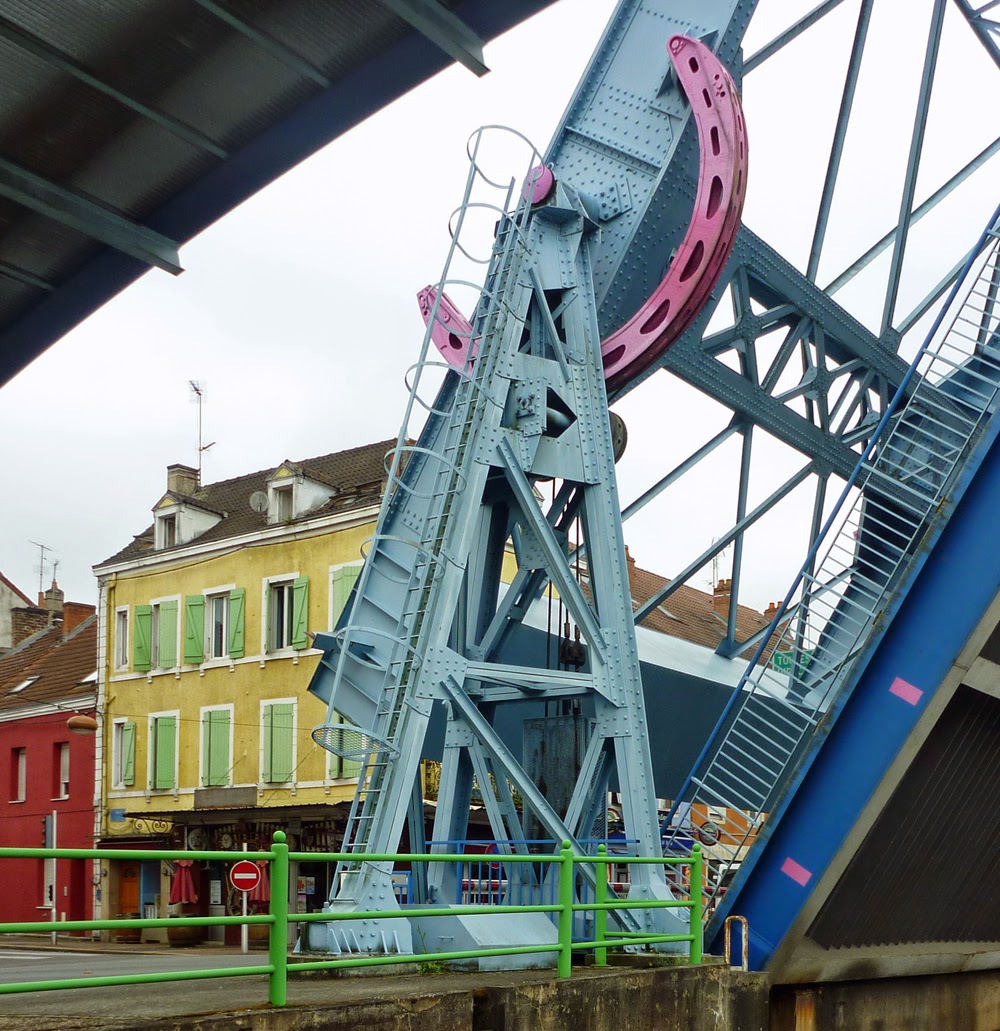 The first of the series is a wonderful bascule lift with colourfully painted parts, clearly showing the massive counterbalance and the complex of semicircular tracks and rollers connected by huge bicycle-type chains and enormous turnbuckles to the bridge deck. The second bridge is triggered at the same time, and is a much simpler affair, hinged to the left bank and lifted by hydraulic rams. 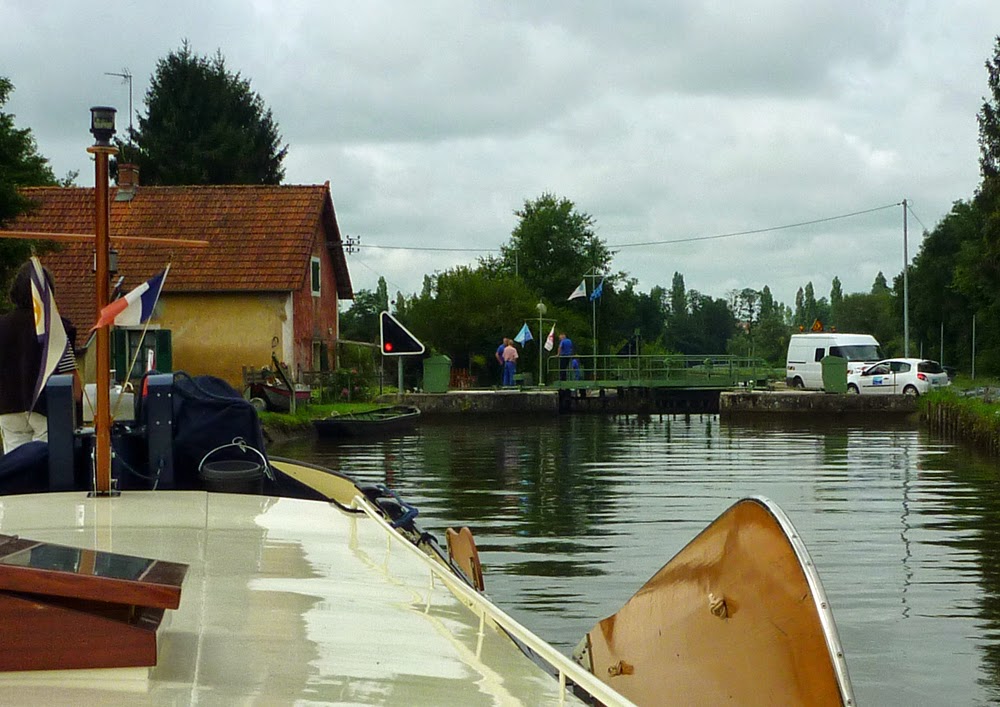 After the third bridge we had to wait as the two boats ahead of us passed down through the lock and then cycled back up for us. A few locks along we were stopped as VNF technicians worked at resolving a problem with the automatic lock operating mechanisms. 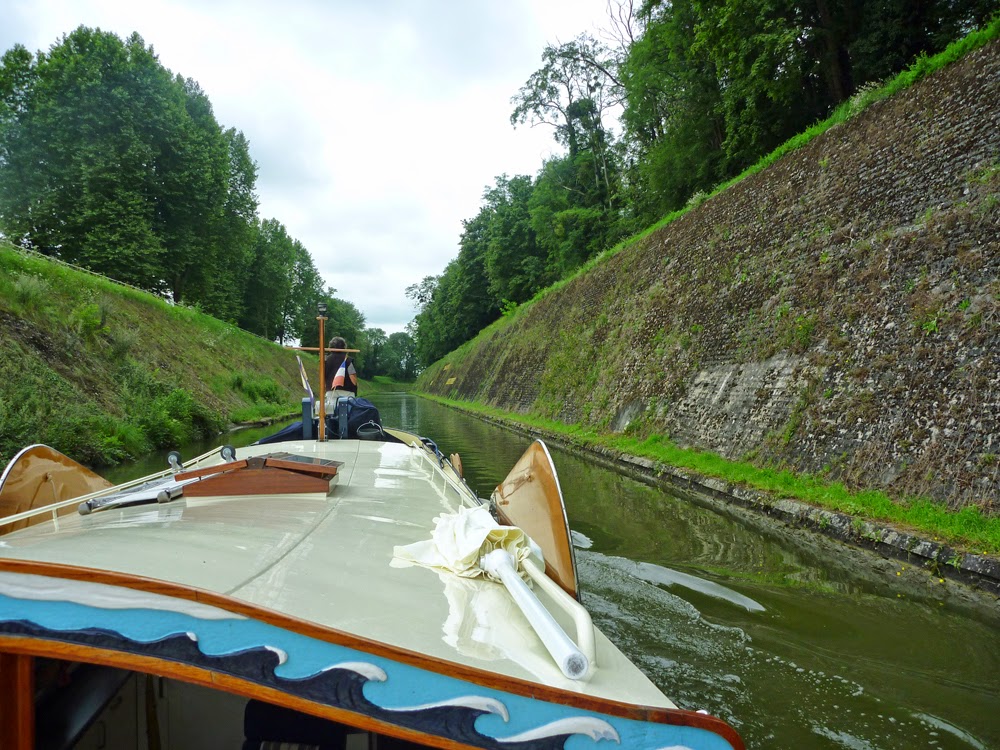 On our way again after a half hour pause, we continued to work our way down through the locks and soon came to a deep masonry lined cut through a ridge. 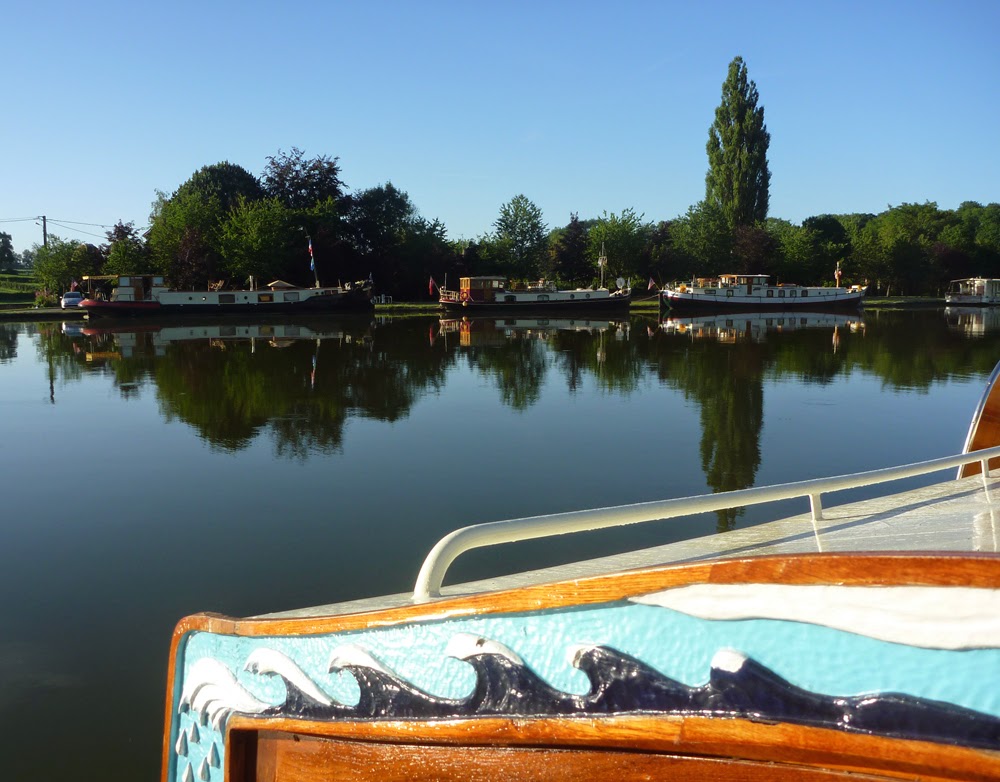 After our seventh lock of the day, at 1236 we secured in the wonderfully peaceful basin in Genelard. This was the fifth time I had stopped here in thirty years, and it has never failed to please. Across the basin from us were several barges, both converted  and new-built that appeared to have found home. 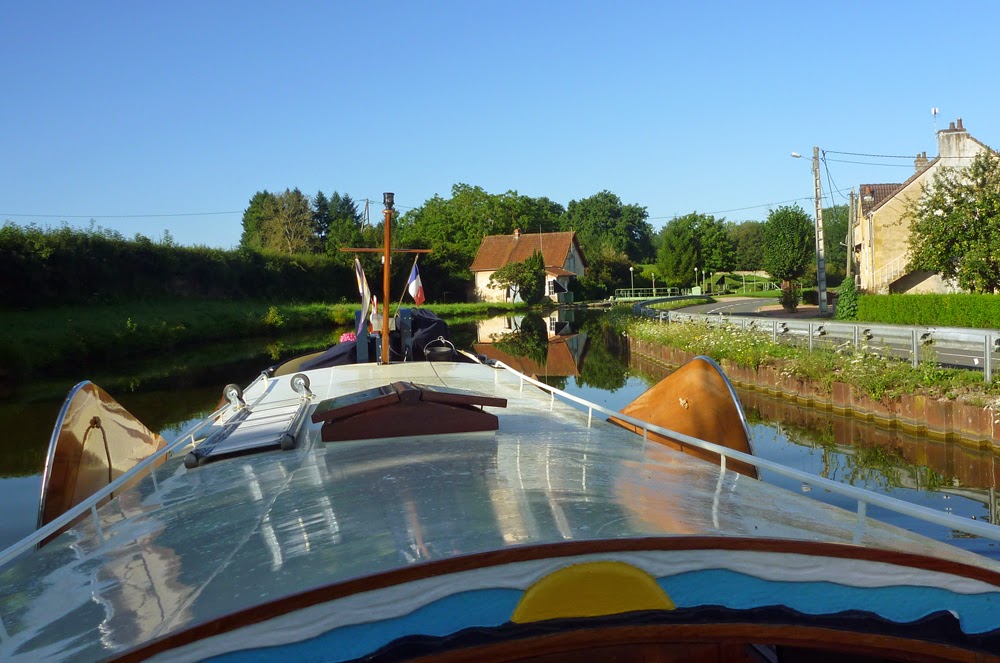 At 0840 on Friday we slipped, timing our departure to put us at the next lock several minutes before it opened and ahead of the three or four other boats we had identified as intending continuing down canal at the same time. We won the lottery and were first in line of four. Next in line was Sancerre, a plastic cruiser we had first shared a lock with descending into la Garonne at Castets-en-Dourthe in June. We had subsequently shared many other locka as well as moorings in Bordeaux, Castelnaudary, Narbonne, Frontignan, Fragnes and Genelard. We each jokingly accused the other of following. 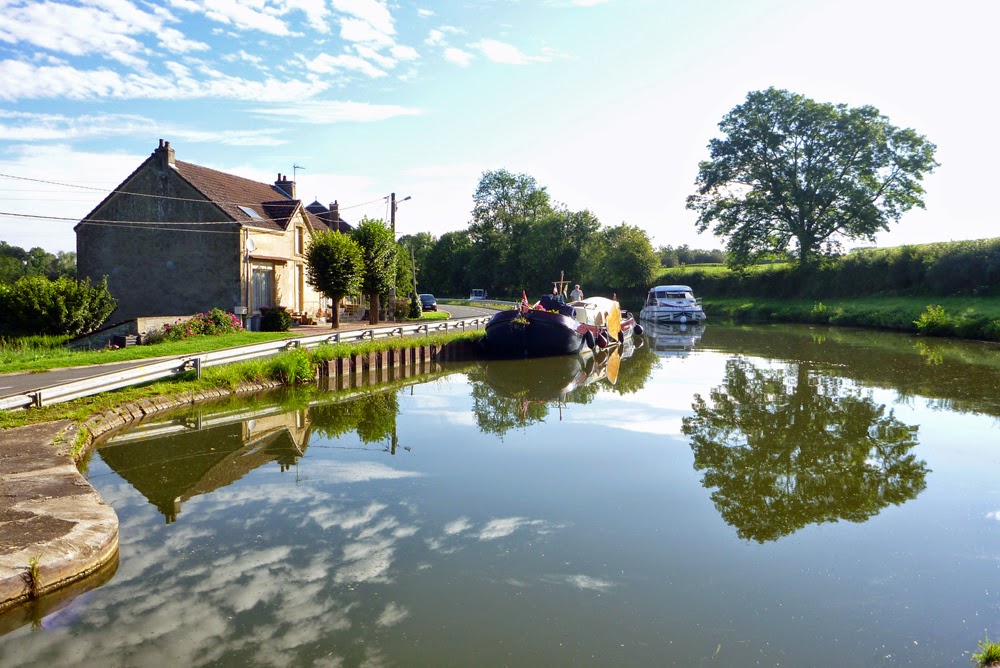 The early morning light along this section of the canal makes ordinary things look extraordinary. 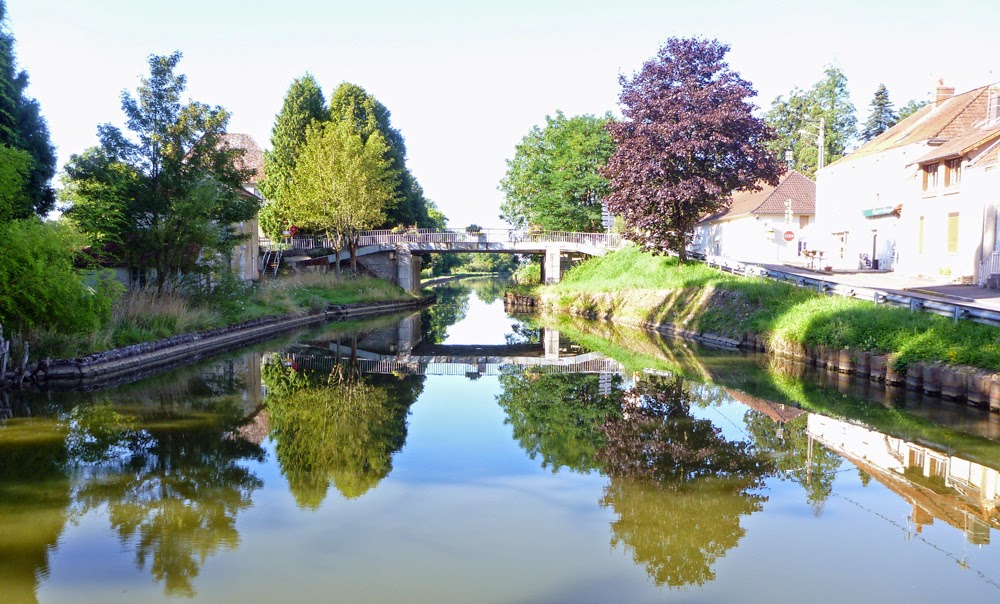 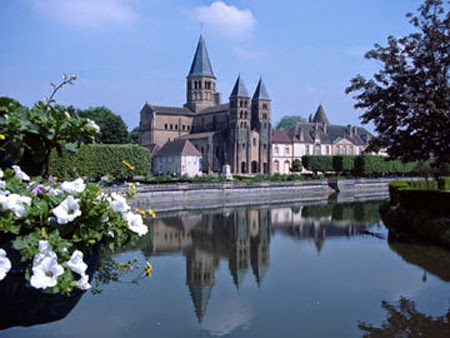 At 1255 we secured to a wood-faced wall in the centre of Paray-le-Monial and after refreshing, went to see the basilica. It was as disappointing as it had been on my previous visits. 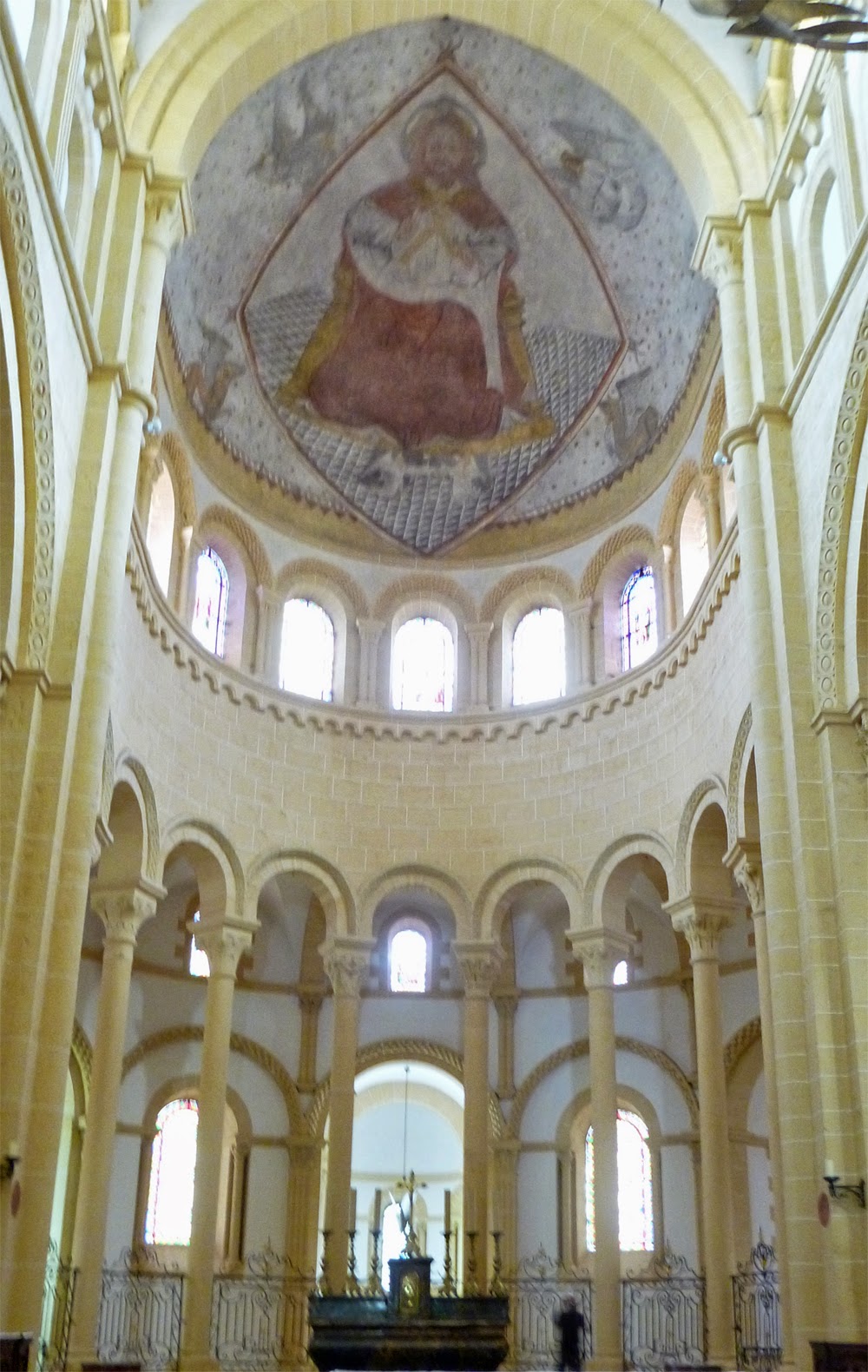 The Romanesque building had been elevated to a basilica as a place to worship a nun who had visions of a bleeding heart in the nineteenth century in a nearby chapel. The interior of the church is rather bland and lifeless. 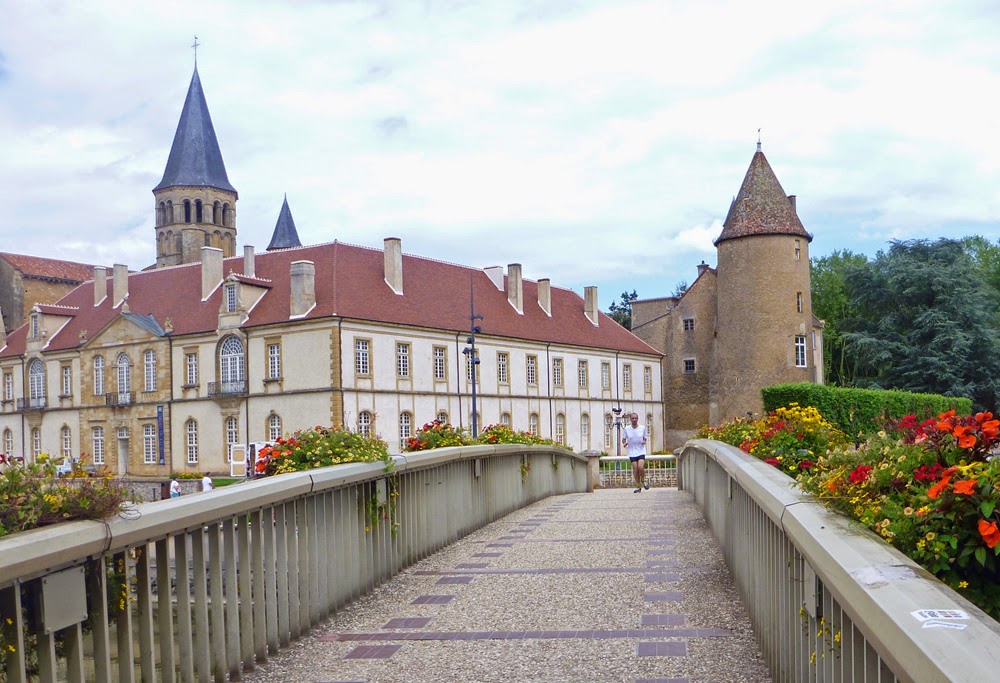 One thing had changed in the town since my last visit; except for a small one, les épiceries were all closed. The little grocery store had a very short selection of produce, none of it fresh. We returned to Zonder Zorg empty handed. 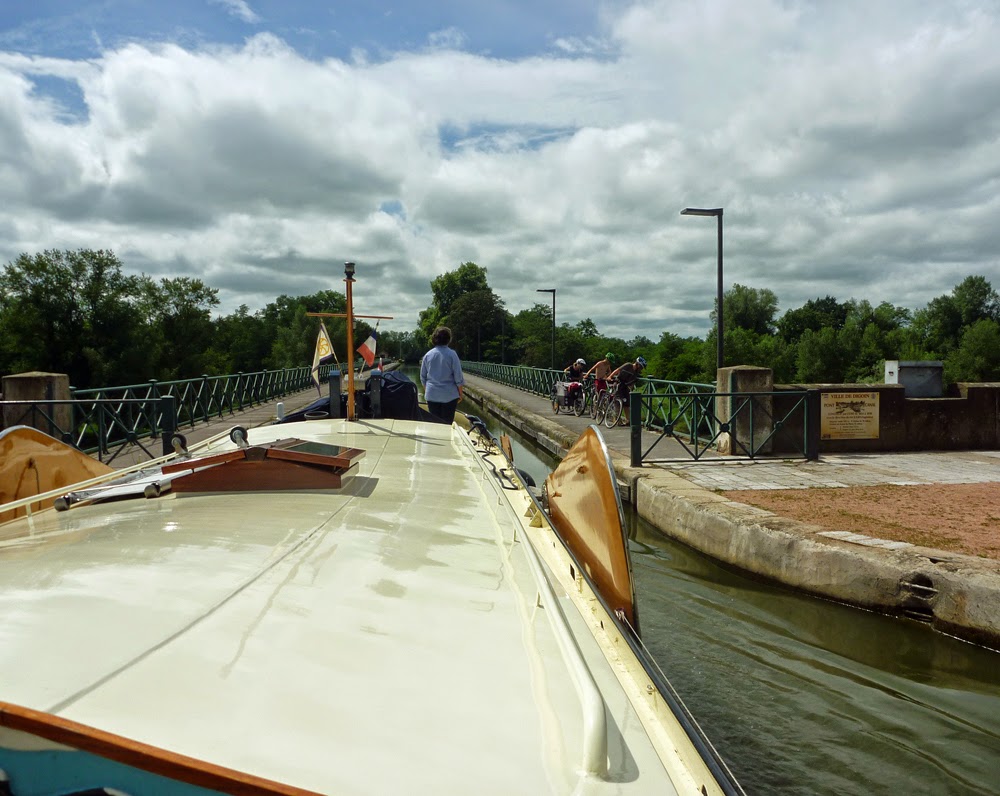 We decided to move on through Digoin Saturday morning and stop in front of the InterMarché beside the canal. I had used this convenient supermarket several times in the past, and with the weekend coming, we needed to re-stock. We slowly motored along the stretch where I remembered the InterMarché to be, but all we saw was a BricoMarché. We rounded a bend and were committed to the approaches to le Pont Canal de Digoin, the aqueduct across the Loire. I then realized that the InterMarché had been converted to a BricoMarché and the new supermarket was nowhere to be seen. Since we couldn’t turn around, we decided we had finished with le Canal du Centre and kept going.
Posted by Zonder Zorg at 03:31