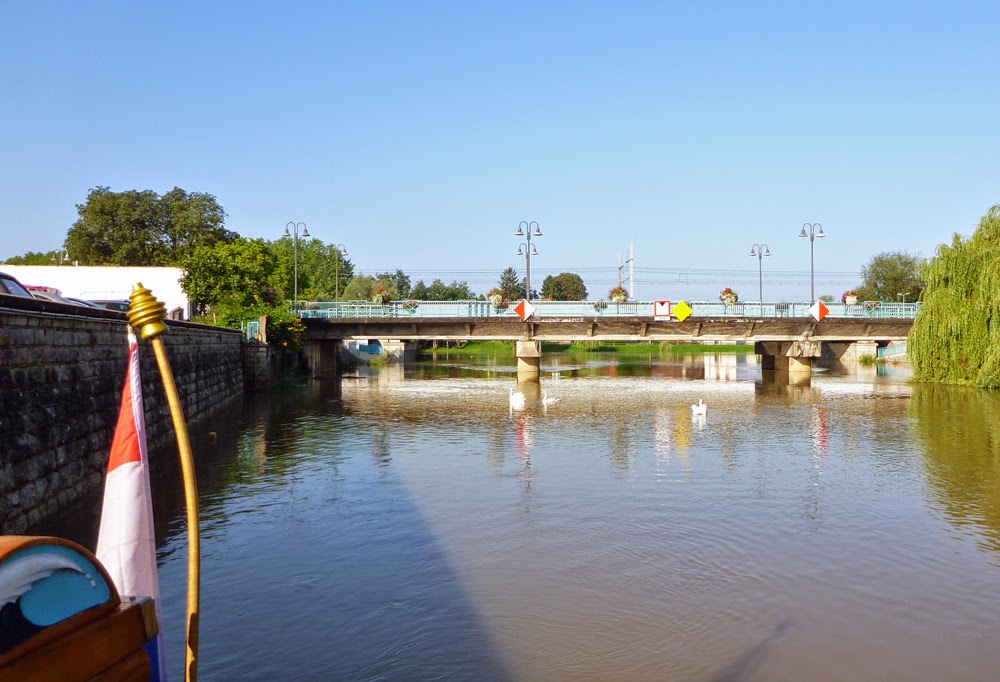 On Tuesday, 29 July we had arrived in heavy rain in Louhans at the end of navigation up the River Seille from the River Saône. We had lowered our mast to pass under the low railway and road bridges to find mooring on solid bollards on a sloping masonry wall. Through the remainder of the day the river rose, and by Wednesday morning it was up eighty centimetres from our arrival. The top of the sloping wall had gone from thirty centimetres above our side decks to half a metre below them and was within a few centimetres of disappearing beneath the water. The clearance below the bridges was far too low to allow us back under. We were trapped. 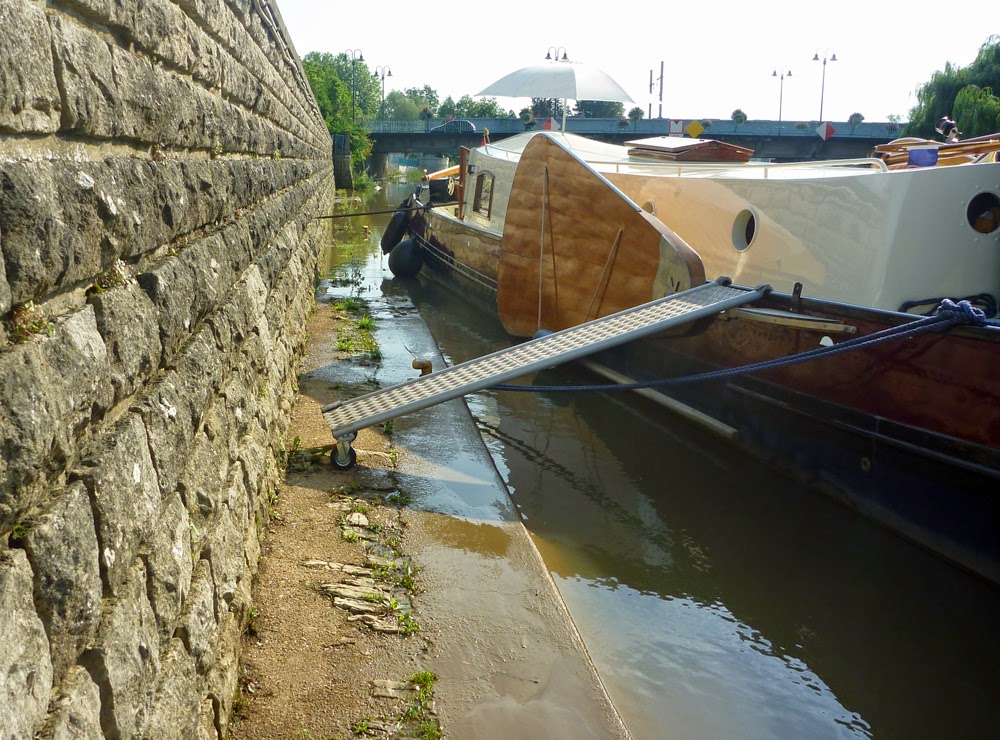 Wednesday the river continued to rise and by the end of the day it had topped the wall on which we were moored. On Thursday the river crested and by early afternoon the wall top began drying. 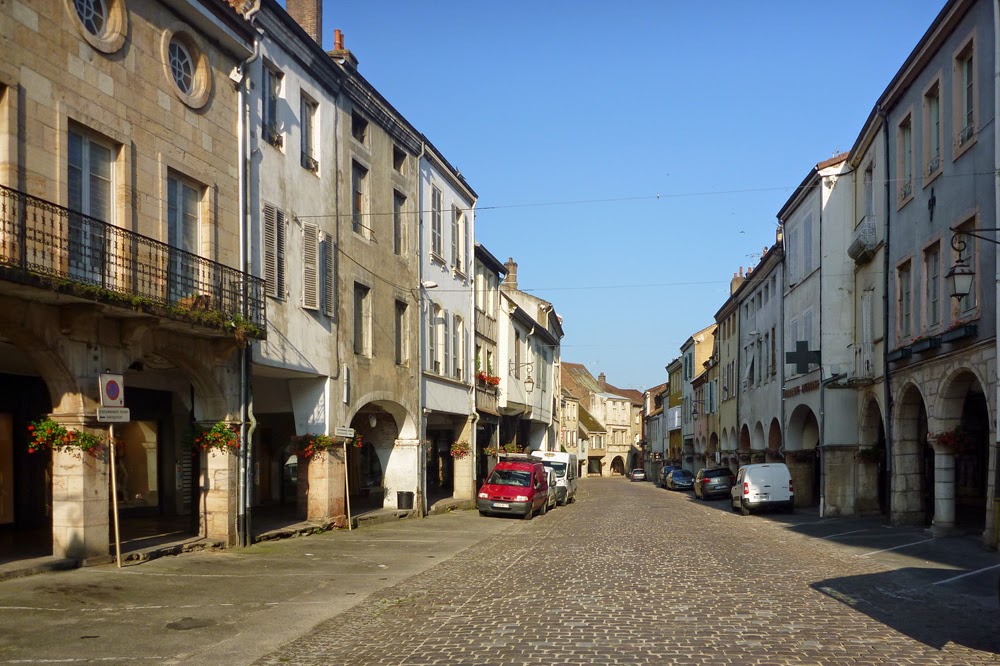 We took advantage of our captivity by wandering along the streets of the old town exploring the shops under the arcades. It appears that heavy, prolonged rain is not unusual here; the town boasts 157 arcades to keep shoppers dry. 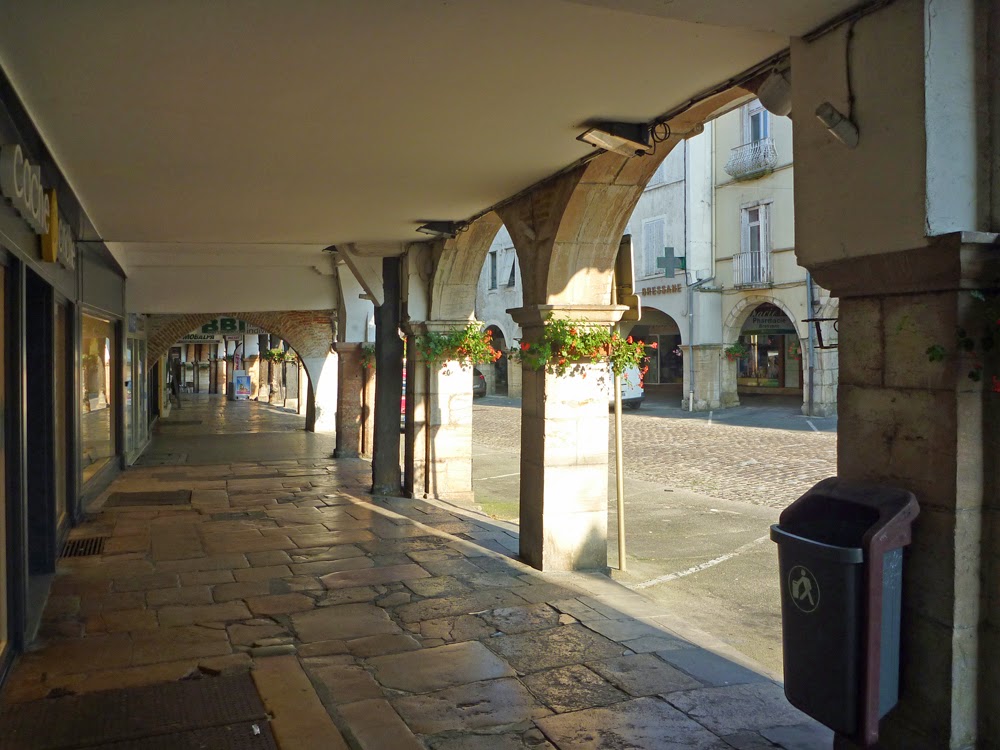 Our explorations had been put on hold when we arrived because the town is closed on Tuesdays and we wandered as if through a ghost town. For the remainder of our stay the shops were open, except during two or three hours for lunch and except for those shops that had decided to start early with their August vacation shut-down. 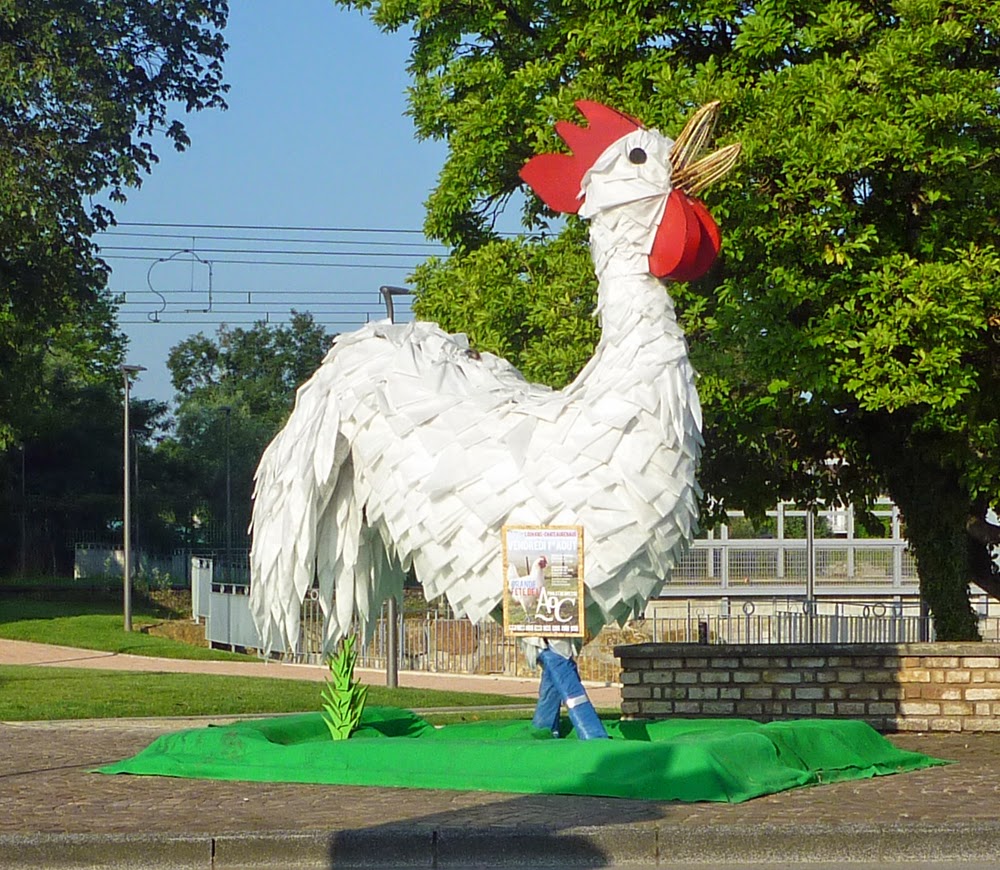 Louhans is the capitol of the Burgundy’s Bresse region, famous for its chicken: Poulet de Bresse, which is renowned for its gamey depth of flavour and fine, tender flesh. In 1957 it was granted an Appellation d’origine contrôlée, the first livestock given such protection in Europe. The meat is highly prized throughout France and sells at double the price of other chicken. Guarding the bridges that had trapped us was a huge model of the bird with its patriotic red comb, white feathers and blue feet. 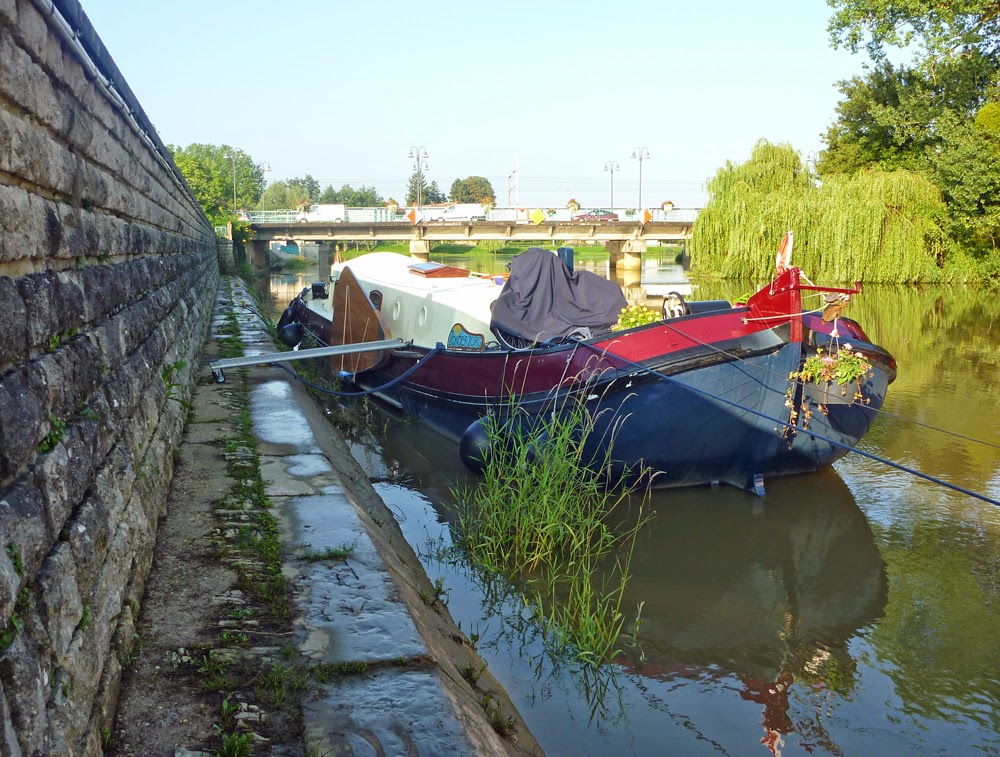 On Friday morning as I headed out for breakfast croissants, I saw that the river was down to a level that would allow us to squeak under the bridge. 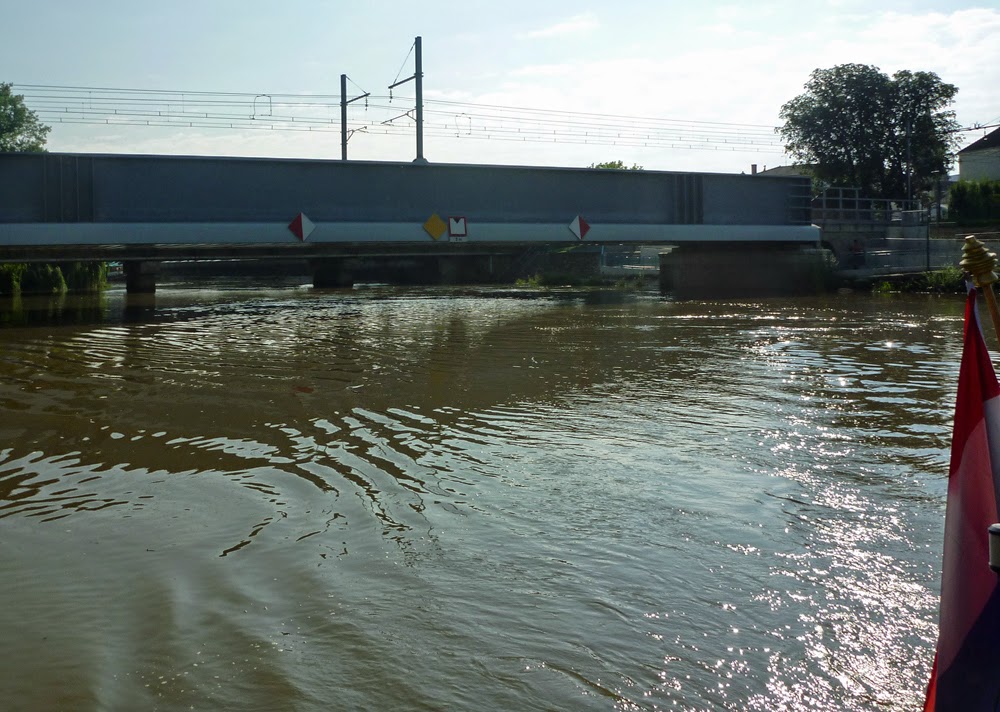 After breakfast we slipped and wore around in the river current to slide under the bridges with a few centimetres to spare. At 0940 we began retracing our route back down la Seille toward la Saône. 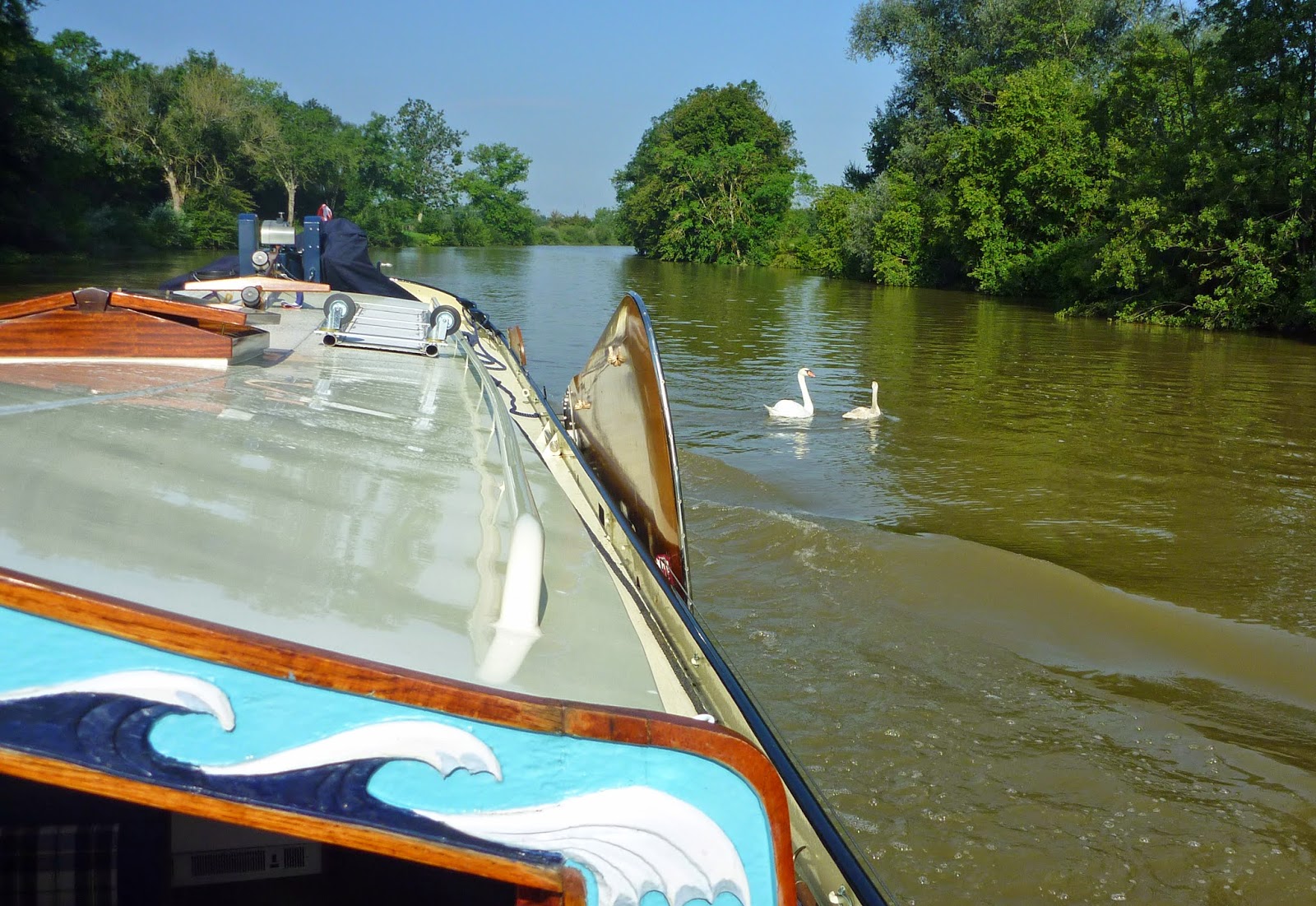 The river current was strong, sweeping us along at between 13 and 15 km/h with the engine at 1200 rpm, turns for eight. 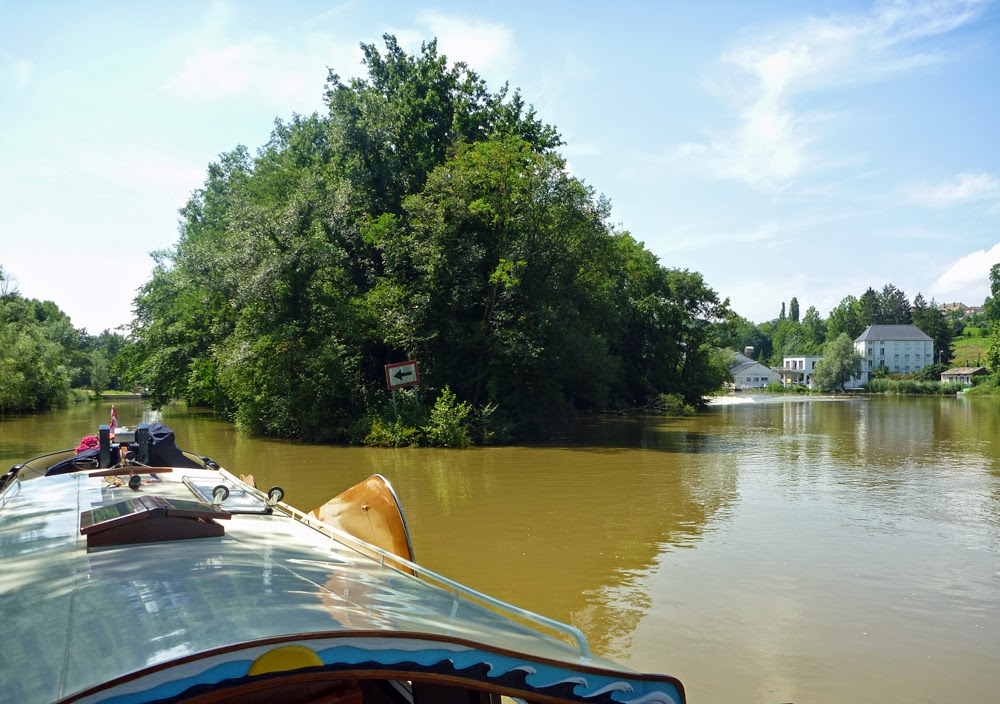 We had some tricky maneuvering in the tight bends and in the approaches to the locks where the current wanted to take us places we didn’t want to go. 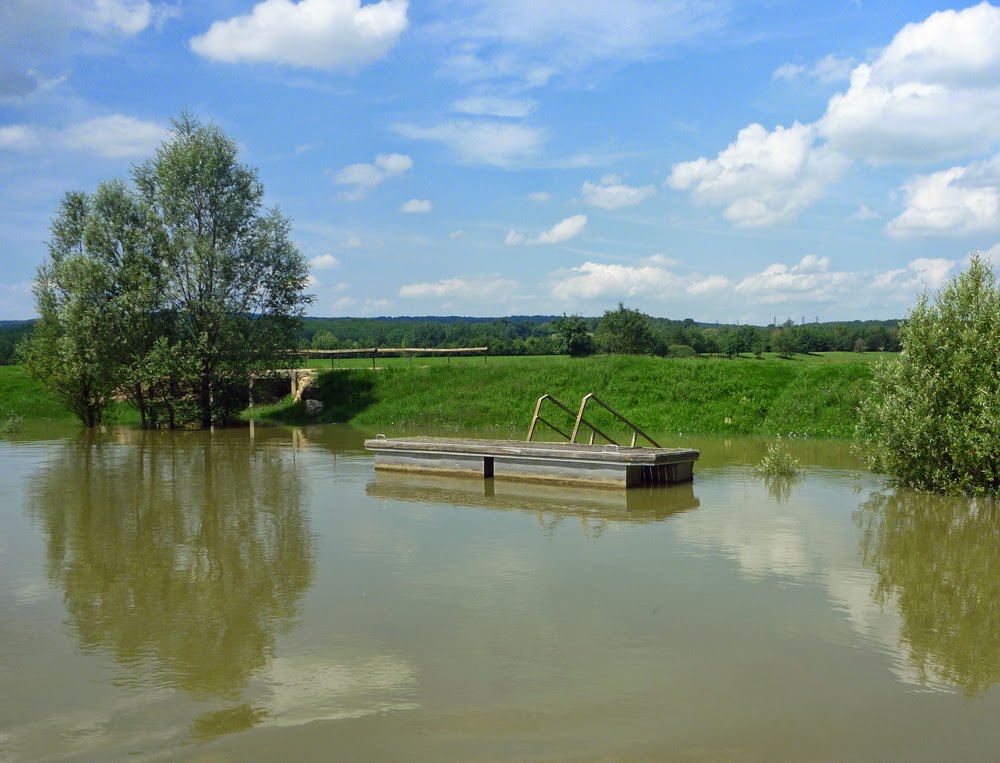 Within three hours we had made our way down twenty-eight kilometres and were in the fourth and final lock before la Saône. Unlike the others on the river, this lock was manned. L’éclusier warned us of very high levels on la Saône; it was approaching two metres above normal. We locked through with barely any drop in level, and as we passed the landing float below the lock, we saw it was an island. The water was so high that the ramp giving access to the bank led down at a steep angle and was totally submerged at least two metres short of dry land and useless for up-bound boats. 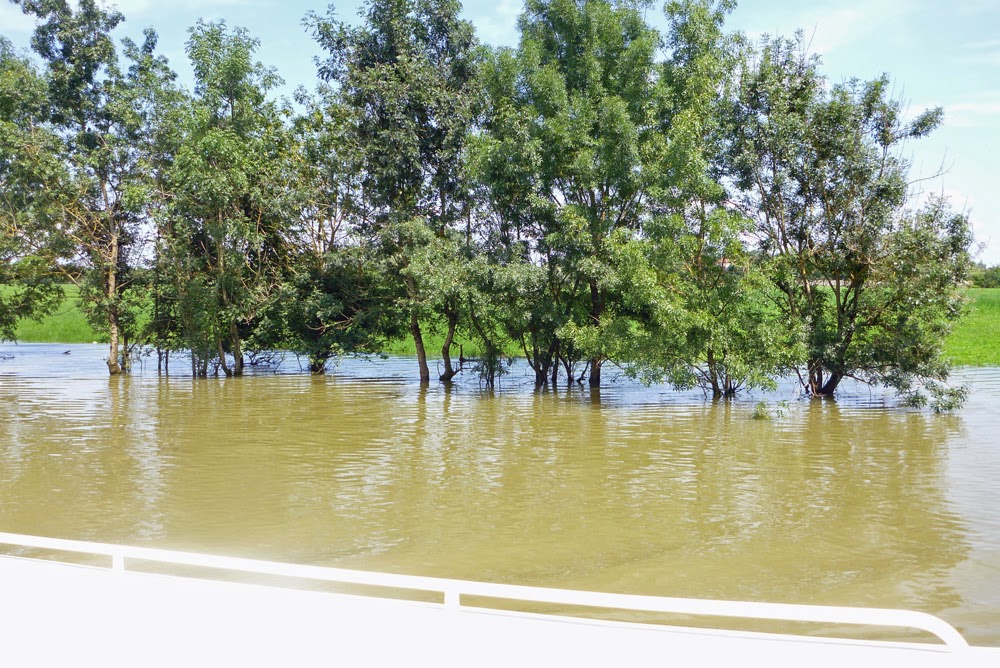 Along the winding half kilometre arm leading to la Saône we had to guess where the river bank was. Fortunately, there were a few lines of trees to give clues, and the GPS marker on our Navionics screen in the iPad gave even better ones. At 1358 we entered la Saône and turned upstream into the current. 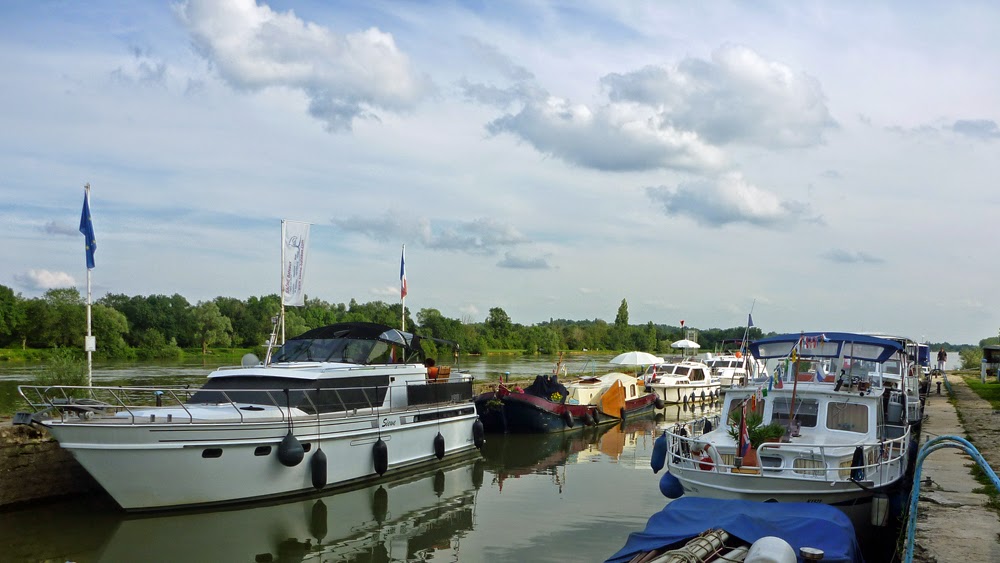 Six kilometres along as we arrived in Tournus, we saw the river was about two metres above normal and had flooded over the tops of the mooring walls we had planned to use. We continued another seven kilometres to the next lock, Écluse Ormes. The rise is listed as only 2.53 metres, but when we entered the chamber, we were already nearly to its top. We rose less than half a metre and continued out into la Saône, which appeared to be at normal levels above the lock. At 1615 we secured in l’Ancienne écluse de Gigny, one of the old locks that were replaced by new works. It is now being used as a marina. 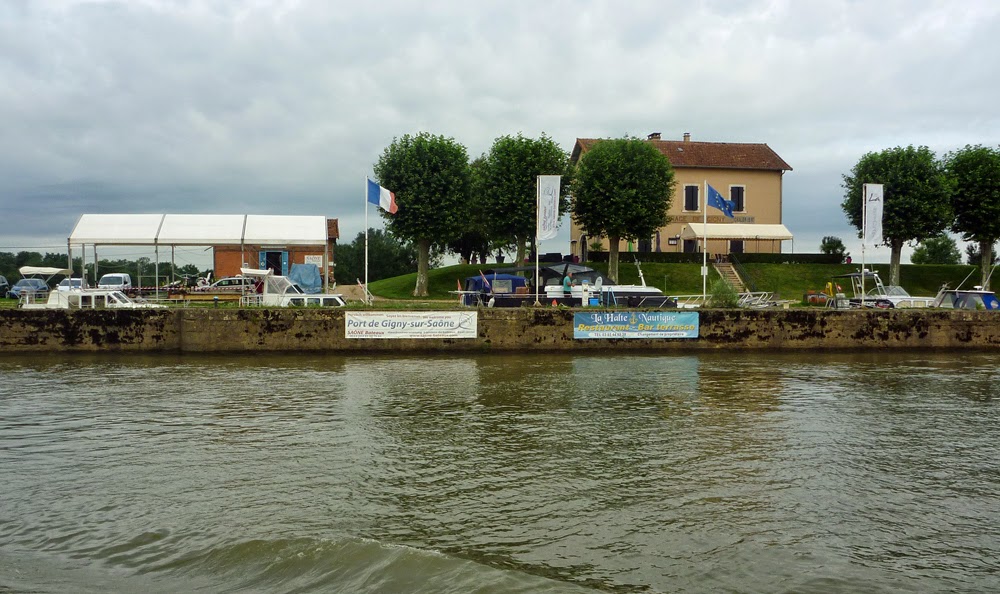 At 0930 on Saturday we slipped, backed out of the old lock and headed upstream into the current. 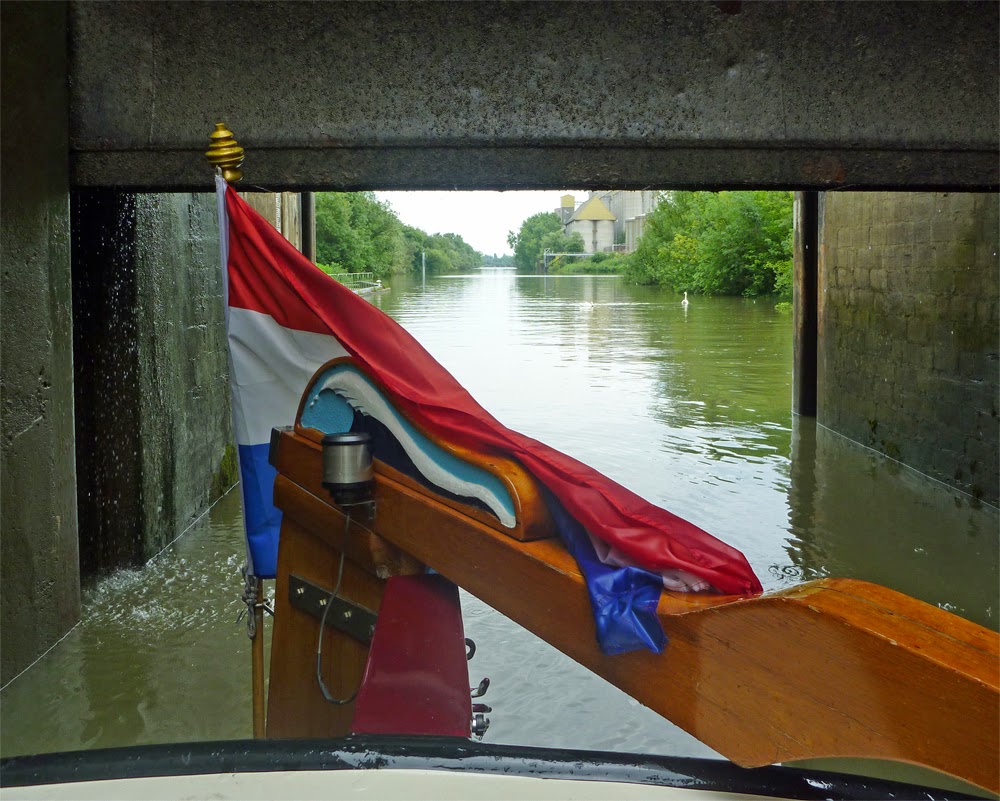 As we approached Chalon-sur-Saône I phoned the marina, requesting permission to pause on their floats for half an hour to visit the adjacent Carrefour. After restocking our fresh supplies in the huge supermarket, we slipped and continued three kilometres upstream to the junction of le Canal du Centre. In the first lock we watched the guillotine door behind us close on the currents of the river. 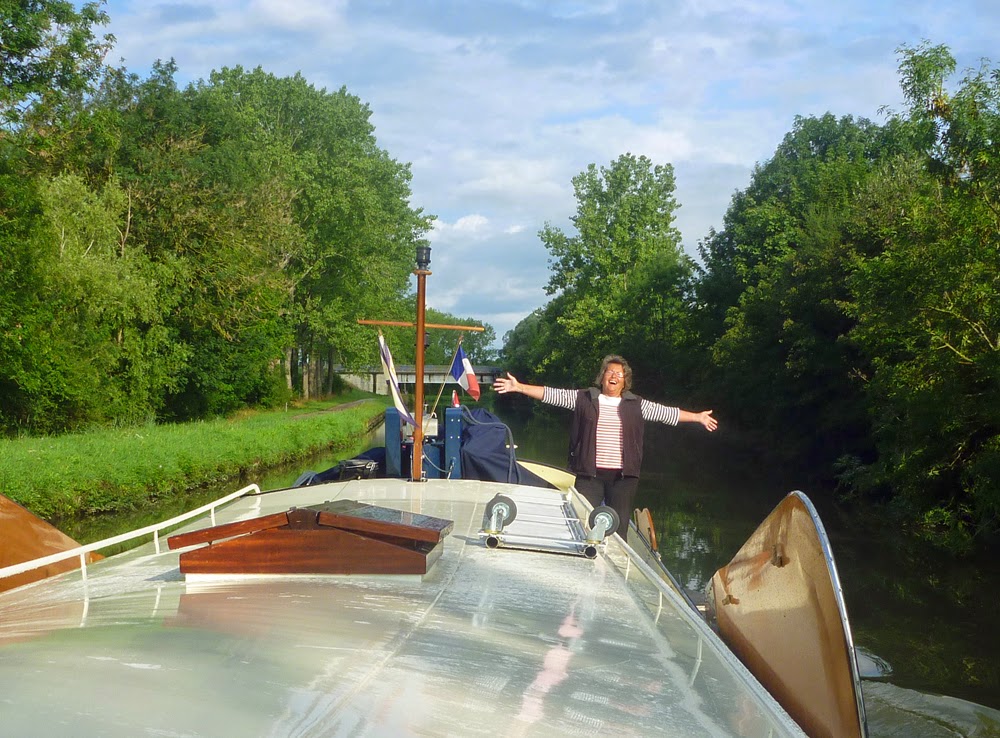 Out of the top of the lock we rejoiced that after more than 500 kilometres and fourteen days in river currents, we were finally back in the placidity of the canals.
Posted by Zonder Zorg at 02:09