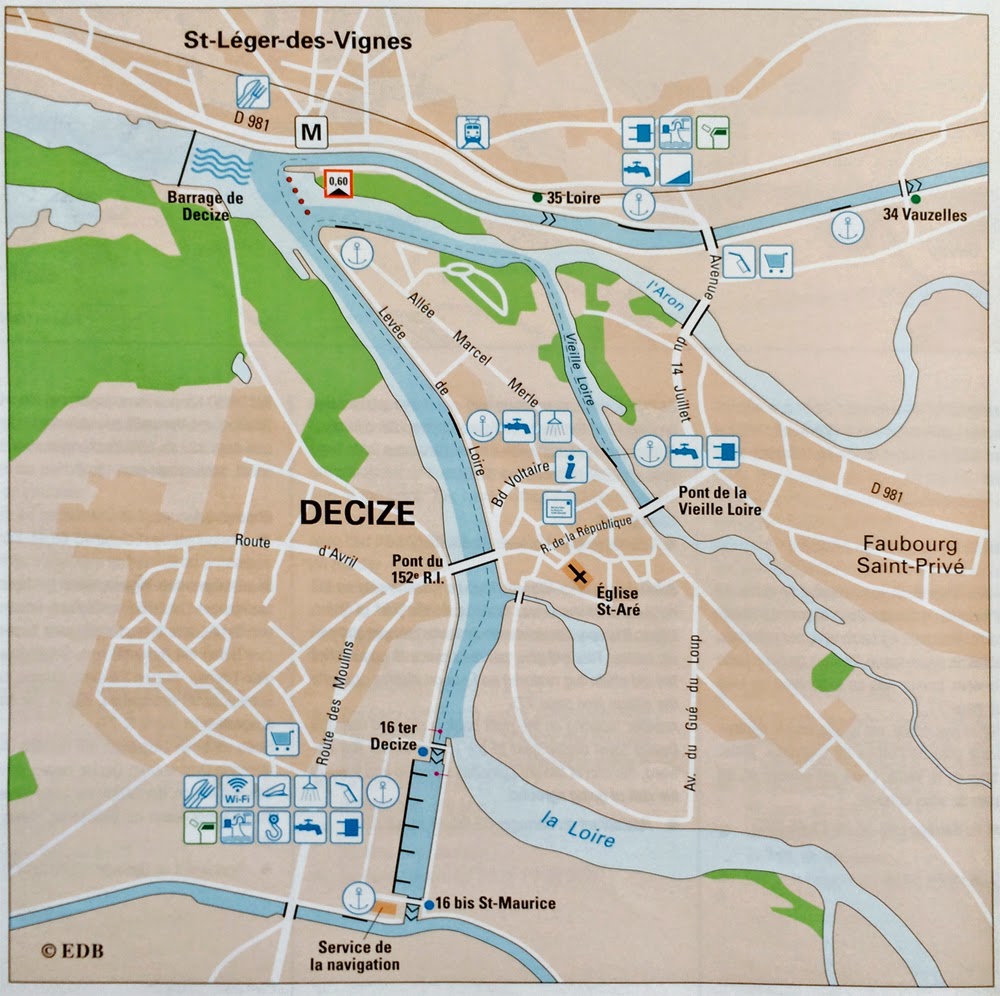 On Wednesday, 13 August we arrived in Decize and moored on the Loire River just upstream of the entrance to Canal du Nivernais. We had arrived in a torrential downpour as a line of thunderstorms moved through. After it had cleared in the late afternoon, we walked across the bridge and along a little over a kilometre to the supermarket to stock-up. We had a long distance to cover with very few large communities along the way. 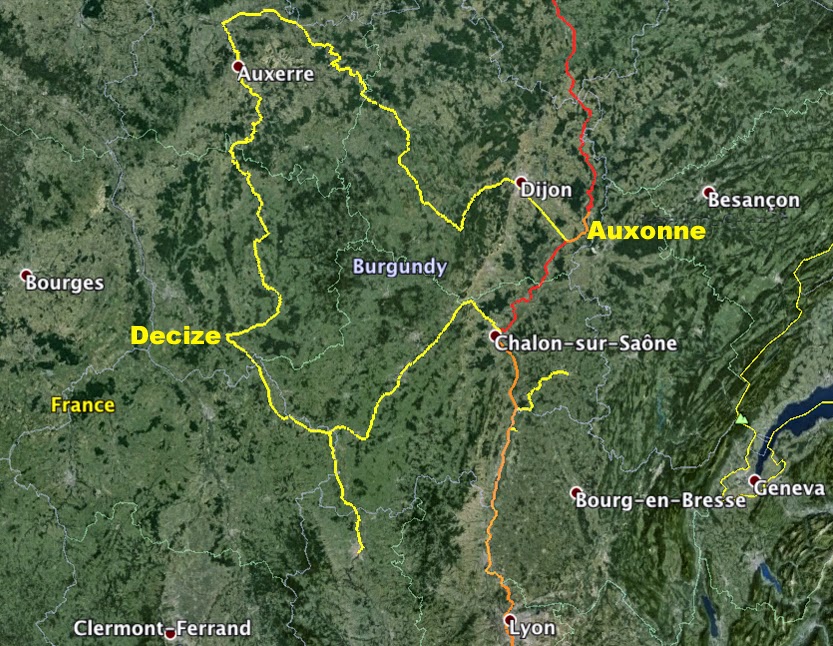 When we had arrived in Chalon-sur-Saône at the beginning of August, we were just two locks and less than ninety kilometres from our winter moorage in Auxonne. With two good months of cruising weather remaining, we had opted to wander west across Canal du Centre, then along le Loire to Decize and from there follow Canal du Nivernais and Canal du Bourgogne back to la Saône. This loop added over 800 kilometres and more than 400 locks to the 1831 kilometres and 375 locks we had done since leaving Carcassonne at the beginning of April. The Nivernais and the Bourgogne are rated as two of the prettiest canals in France and we were looking forward to them. 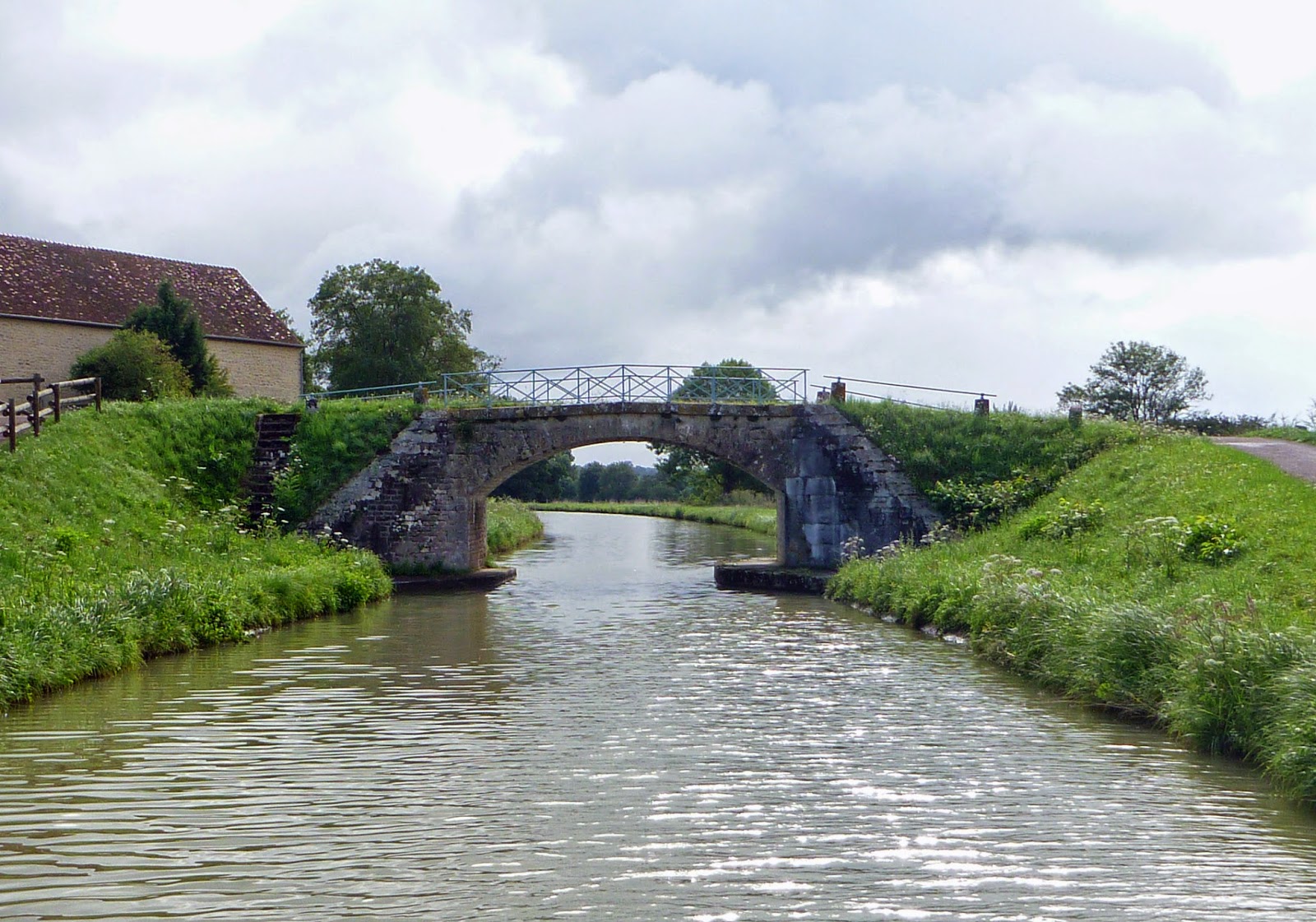 The unsettled weather continued with a cold, bleak day on Thursday. There was a light drizzle as we slipped at 1000 and headed to the  beginning of the Nivernais. Intermittent rain showers continued, so at 1255 we decided to stop for the day on a float in the river at Cercy-la-Tour. We had passed through three locks and had come 16.9 kilometres along a rather bland section. The canal was beginning to become pretty. 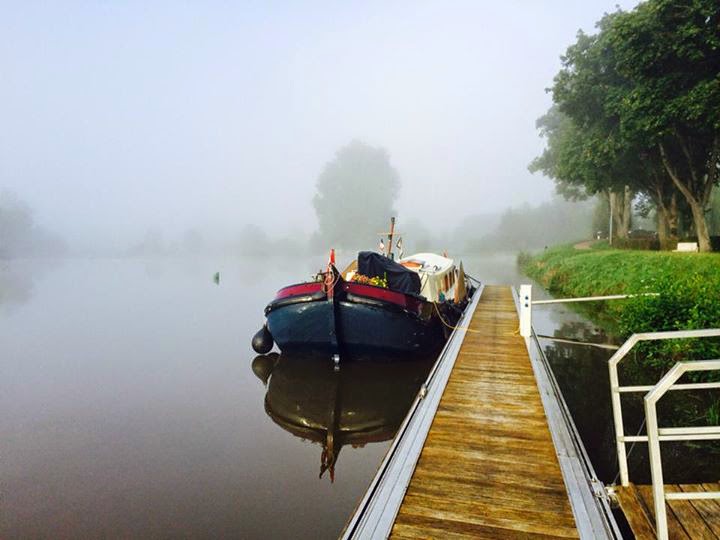 On Friday morning we awoke to dead calm with the early sun just beginning to burn through the fog. The decks were thick with dew. 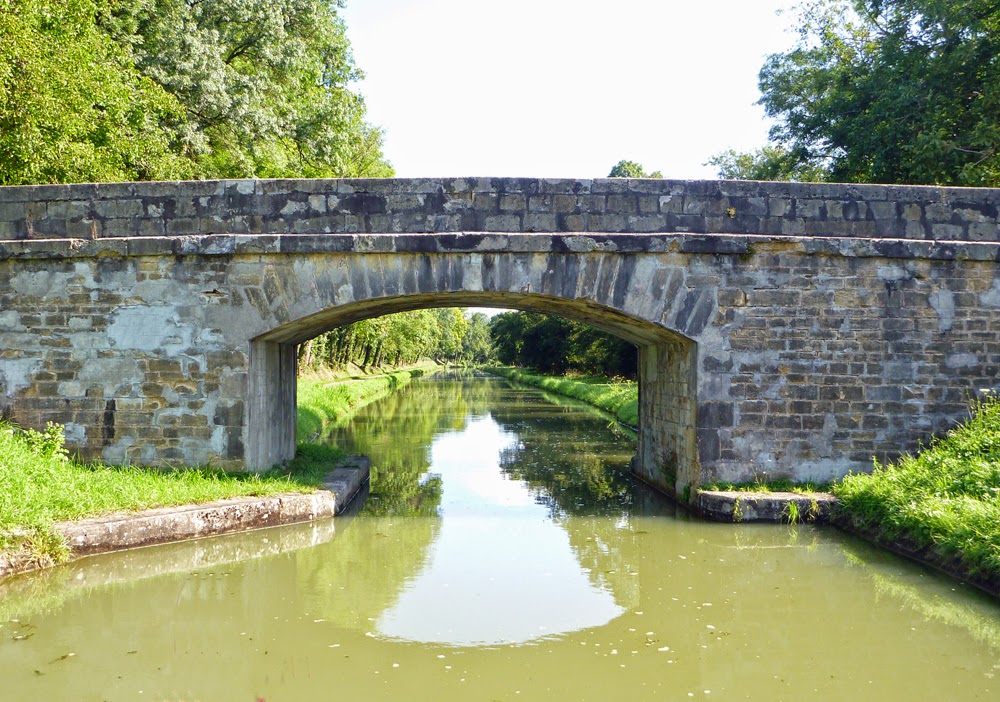 Our fuel gauge was showing about 100 litres remaining in the tanks, so we had about 30 hours of motoring remaining before running dry. The next fuel facility shown in the guide is 180 kilometres and 111 locks further along the canal in Auxerre. With very careful engine use we could just make it, so as we continued along the canal we kept our eyes out for earlier possibilities. 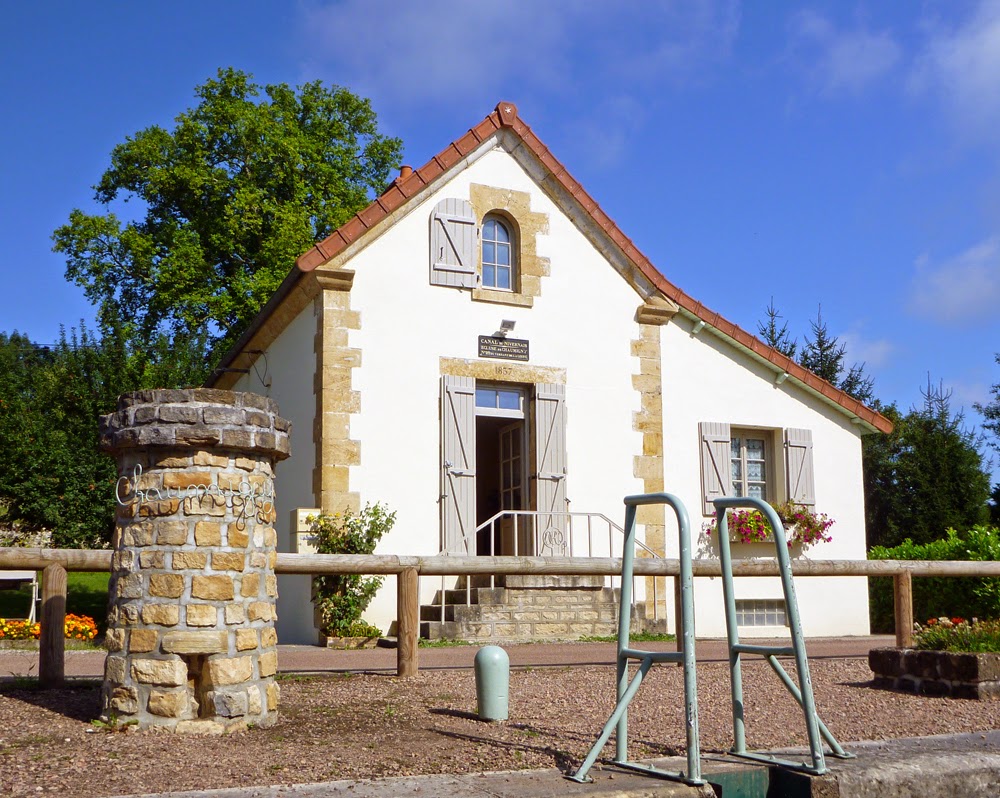 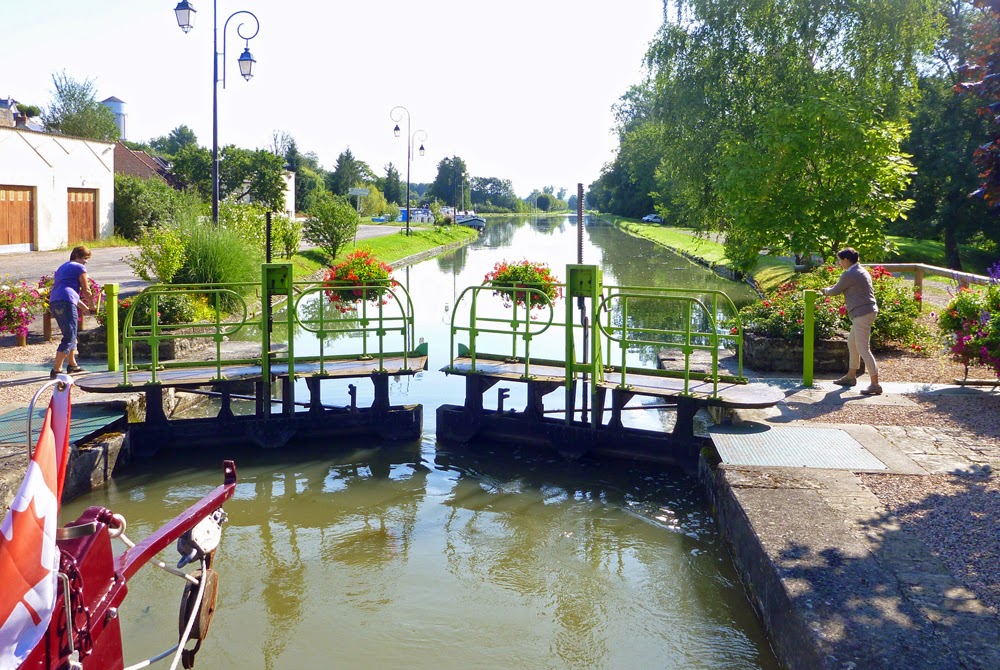 It is a pleasure to see that in many instances their personal pride has spread into well-maintained grounds and locks. 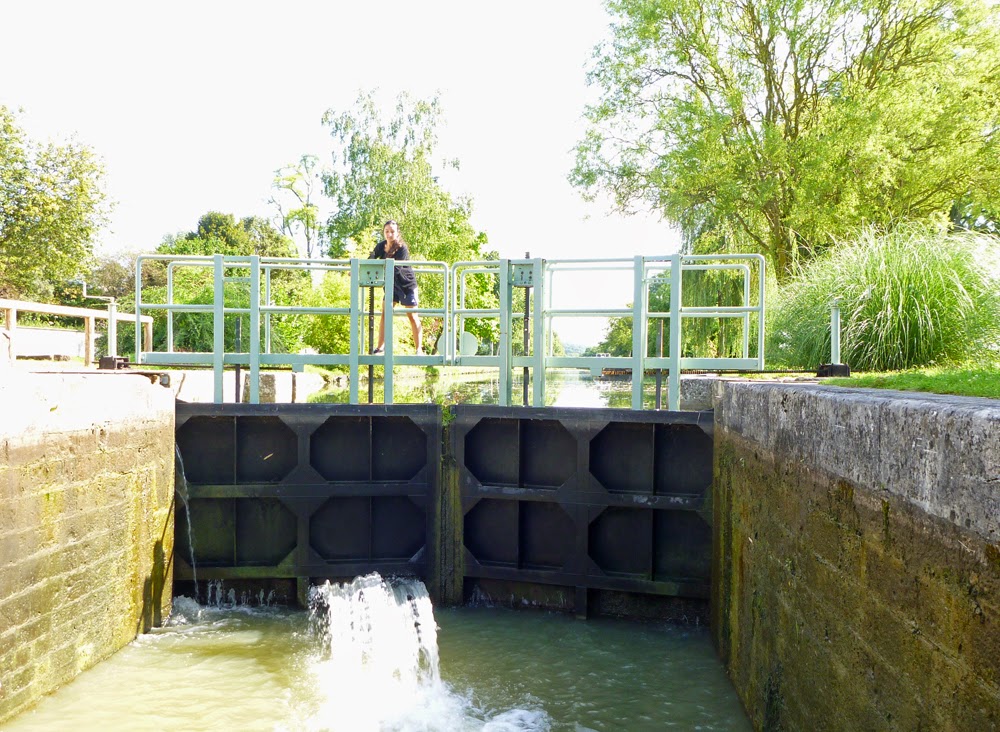 In the more remote areas, the lock keepers are students on summer employment and they operate a series of two or three locks, traveling between them on motor scooters or by bicycle. 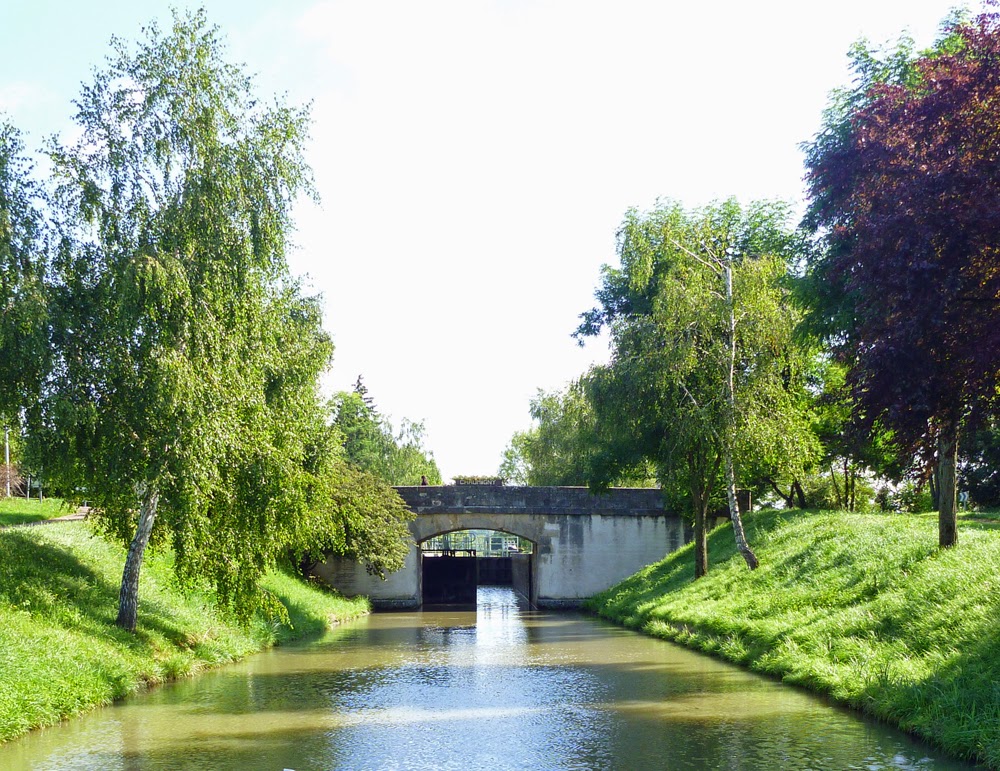 Along one section, the locks all needed to be drained before we could use them so with the short distances between locks, we generally had to wait five or ten minutes while the lock keeper scooted ahead, closed the upstream gates, closed their sluices, opened the downstream sluices, drained the chamber and then opened the gates. 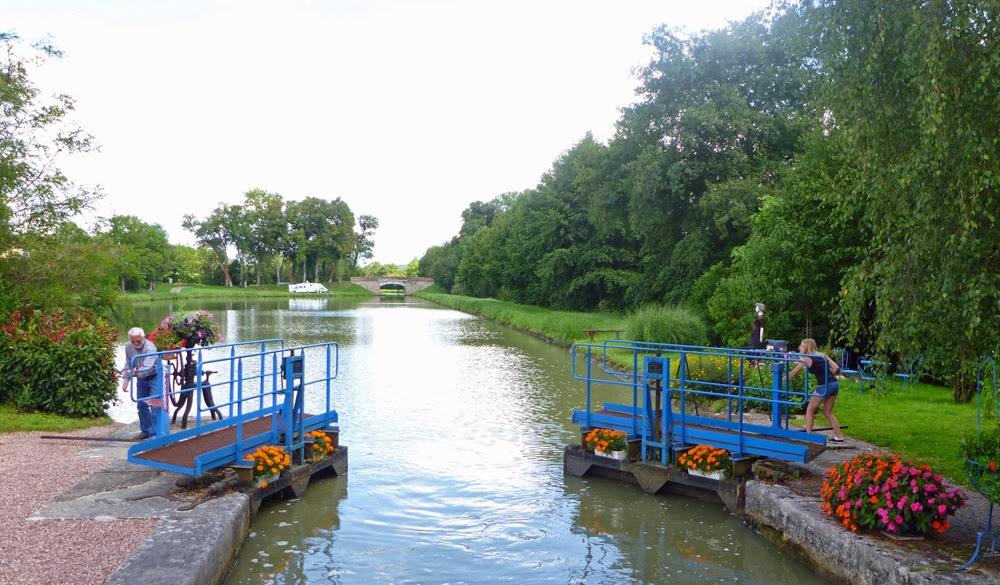 In most locks I was able to moor next to a ladder so I could climb out of the chamber to close one of the downstream doors. Also, I always opened one of the upstream doors once the chamber had filled. This made the job much easier and quicker for the keepers and seemed to encourage them to pass a good word along the canal as they contacted the next lock keeper to announce our coming. We enjoyed very good receptions all the way along. 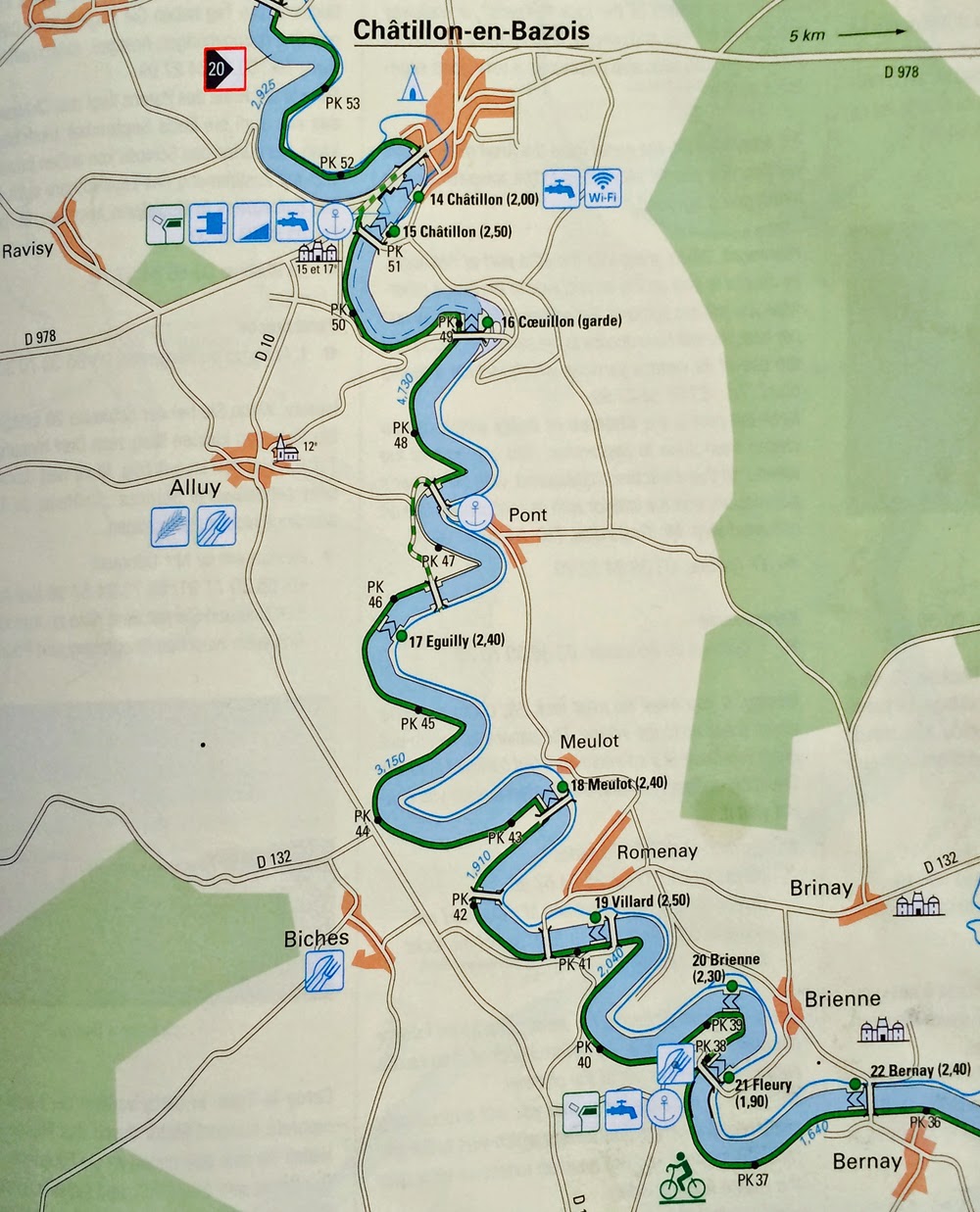 Mid-afternoon we stopped for the day along a low wall with bollards just short of Écluse Fleury. We had come 30.1 kilometres and had worked our way up nine locks. Ahead of us was a very winding course taking fourteen kilometres and eight locks to make five kilometres up the slope. 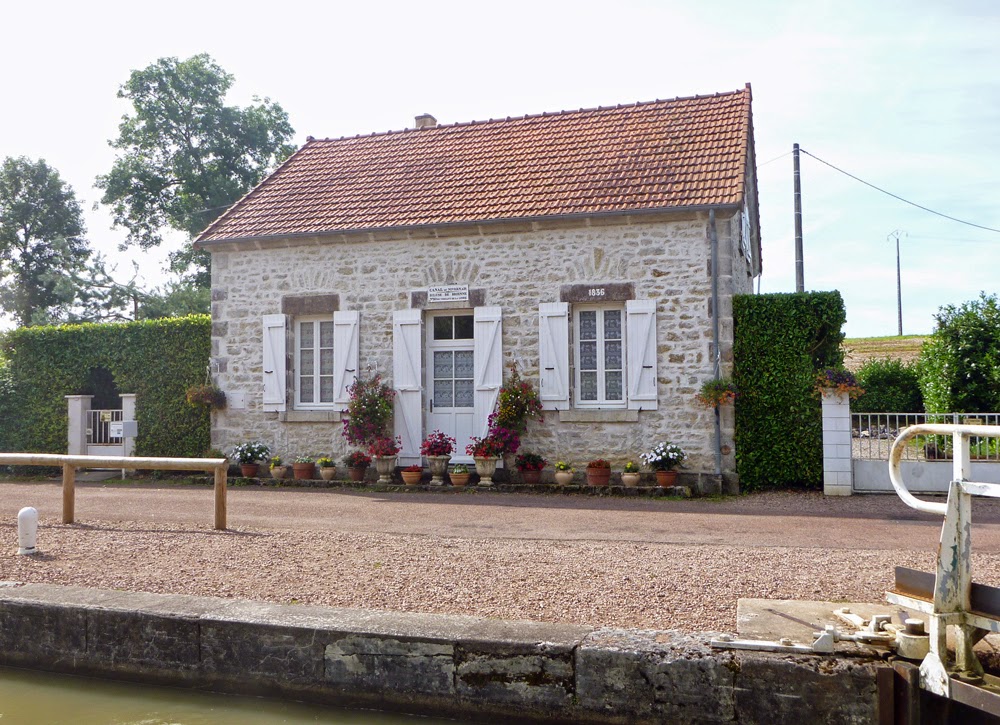 After a leisurely breakfast, at 1015 on Sunday morning we slipped our lines and continued along the canal. We continued past beautifully restored and maintained lock houses, most of them built in the mid-1830s as the canal was being completed. 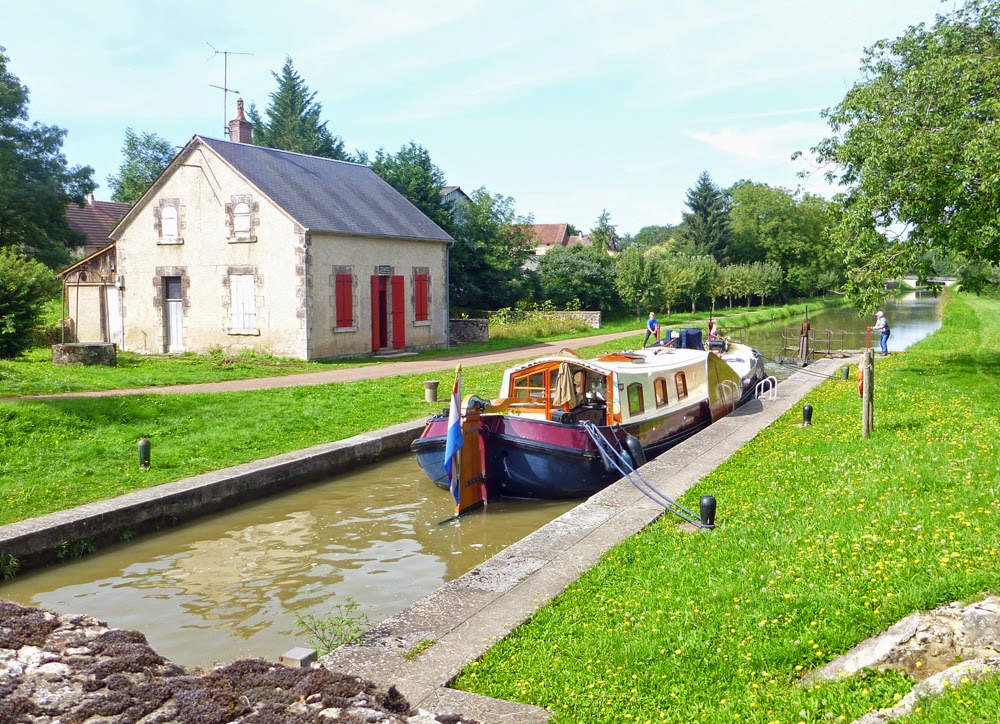 I assisted les éclusiers with the gates and we moved along quickly. 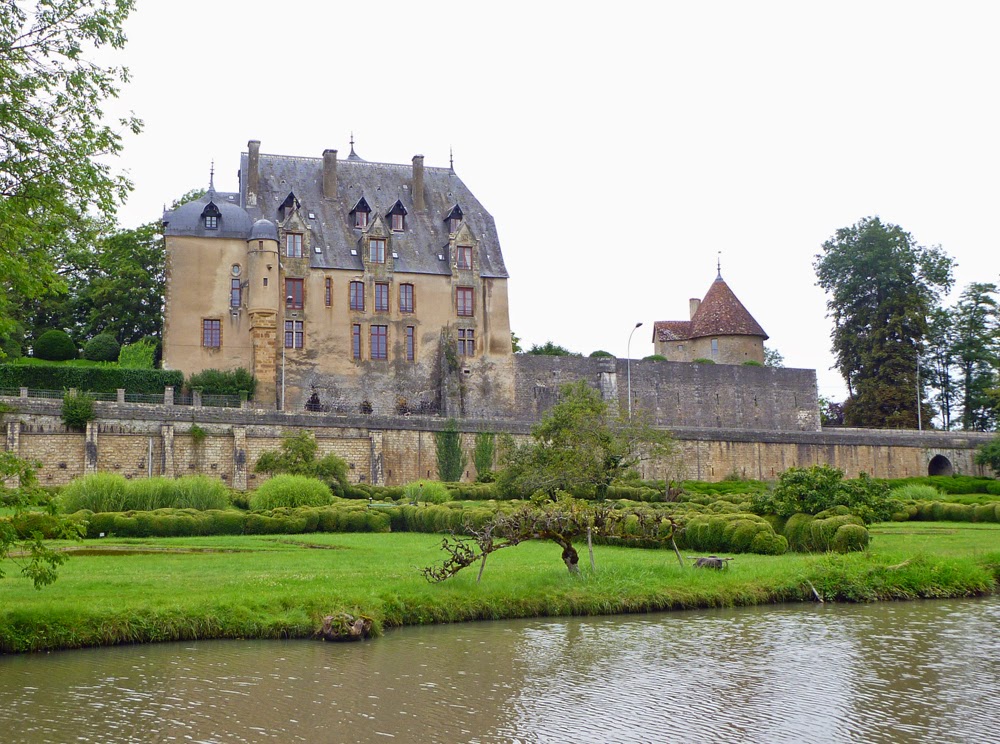 After pausing for an hour at noon for the lunch closure of the canal, at 1405 we arrived in Châtillon-en-Bazois and secured for the day below the imposing château. 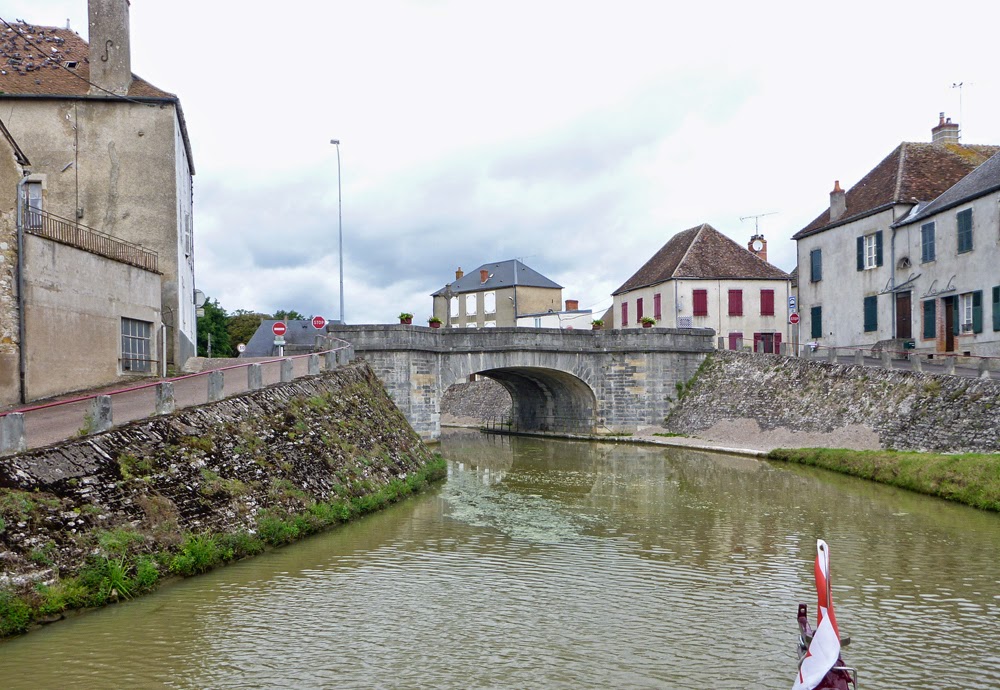 On Monday morning we explored the area and restocked our fresh provisions from the mid-town supermarket. Shortly before 1300 we slipped and continued up the canal, timing our departure to have us at the next lock as l’éclusier returned from lunch. 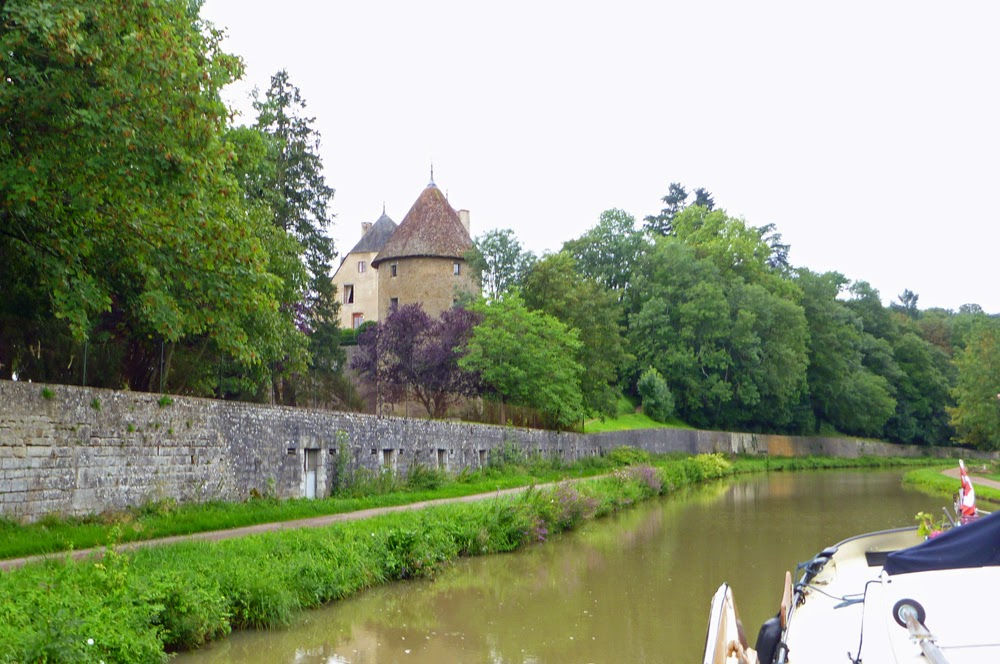 Along the way we passed wonderful old structures. 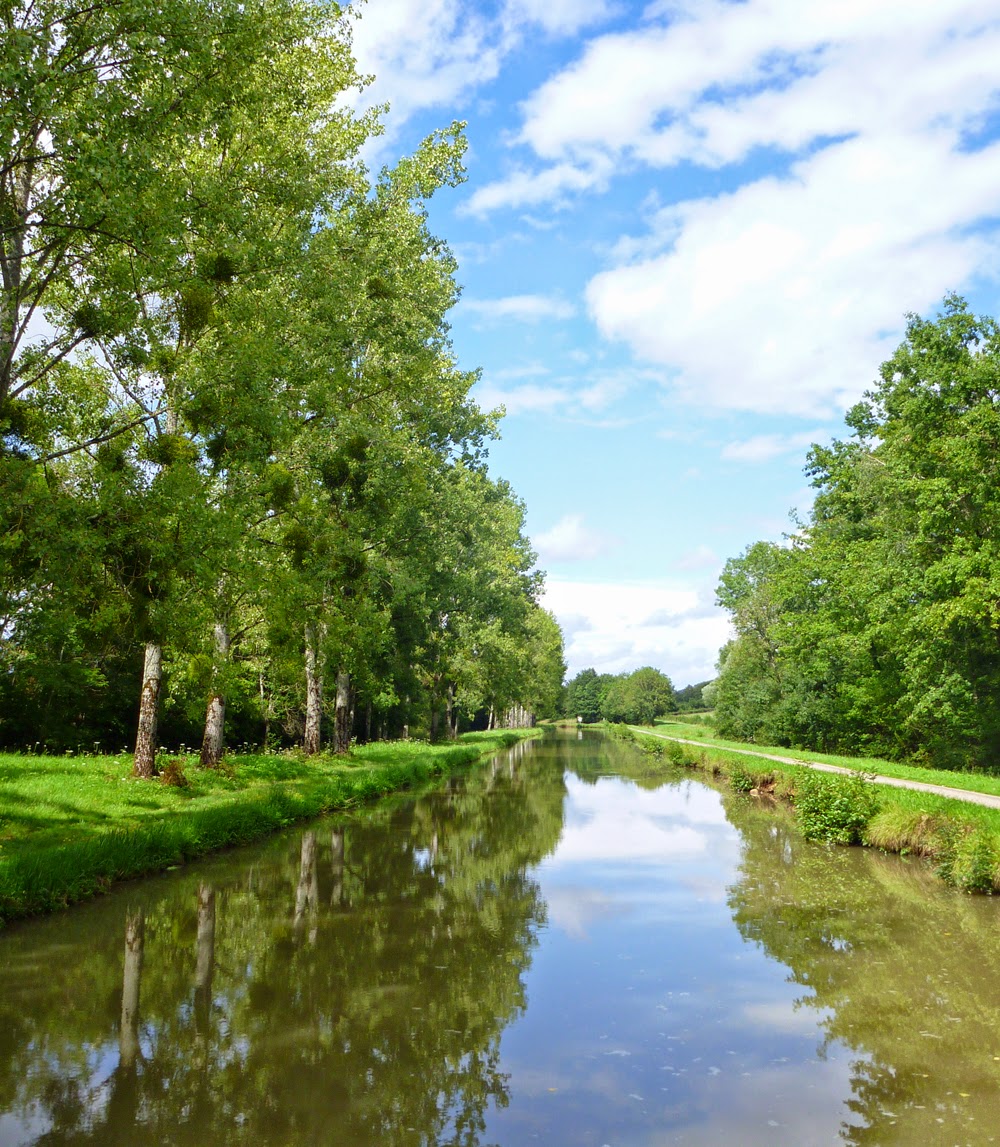 We wound our way through tranquil pastoral settings… 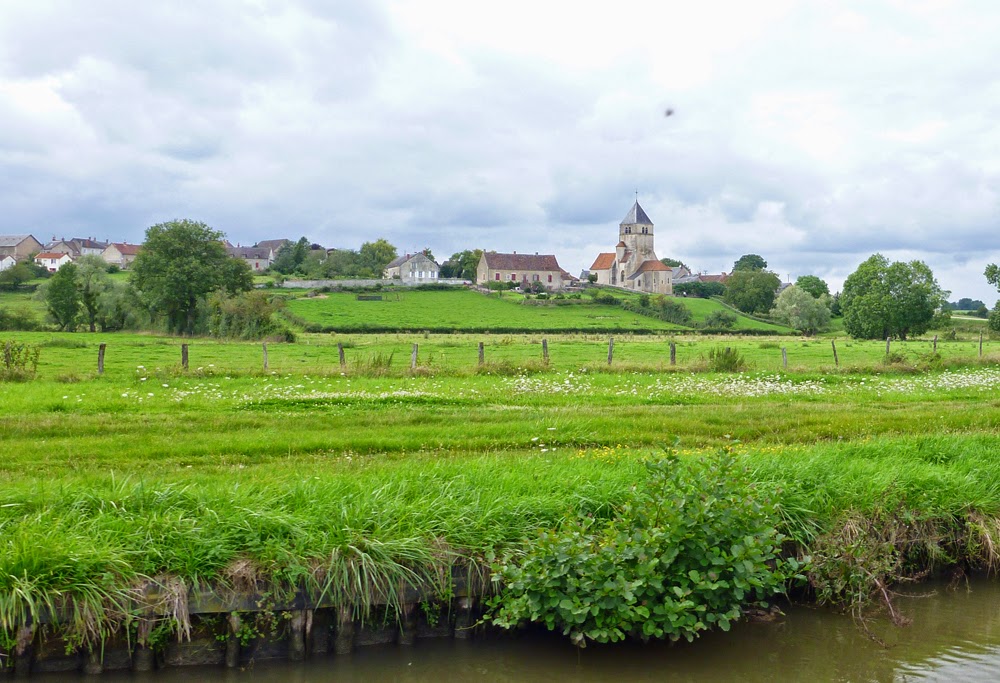 … and beneath peaceful villages on the hills, both in the foreground and in the distance. 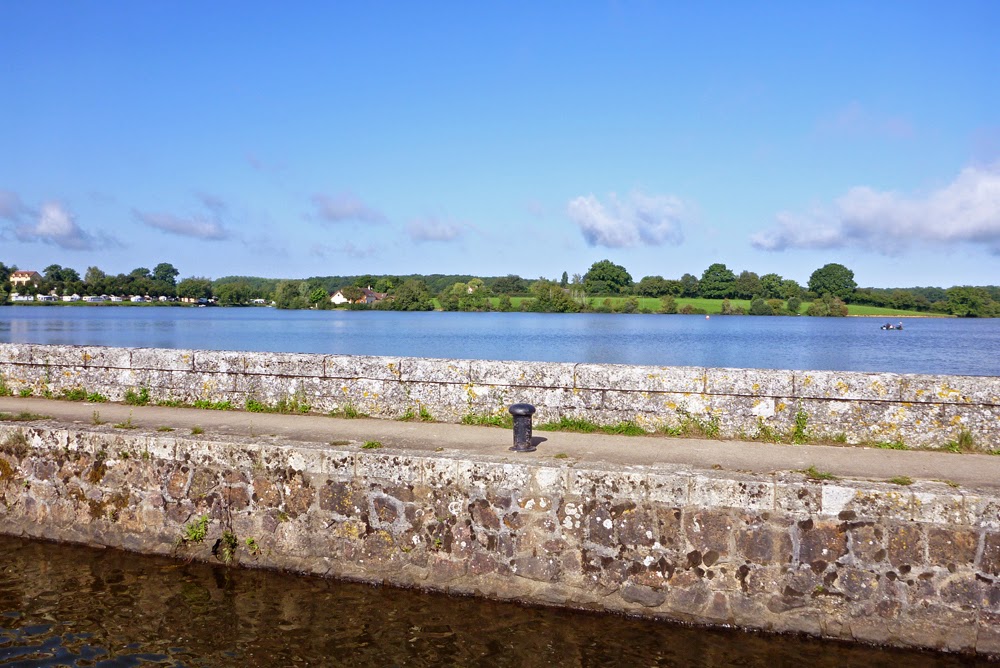 After sixteen kilometres and fourteen locks, at 1830 we secured to a stone wall on bollards and rings. The wall is the dike between the canal and Étang de Baye, the main reservoir of Canal du Nivernais. We had reached the beginning of the summit pound. 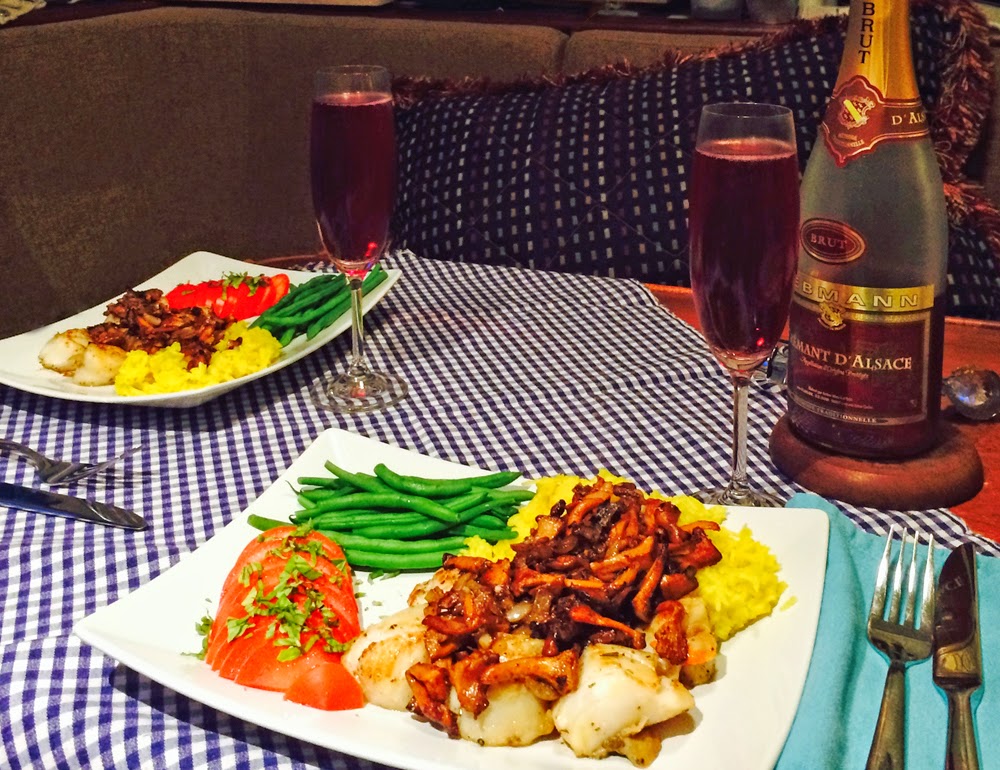 To celebrate, in the evening I seared some huge noix de St-Jacques and served them with girolles sautéed in butter with minced garlic and shallots and a liberal splash of Bas Armagnac. Saffron basmati rice, steamed green beans and sliced roma tomatoes with shredded fresh basil completed the plates. The accompanying Rebmann Crémant d’Alsace rosé complemented splendidly. We love wilderness boating. 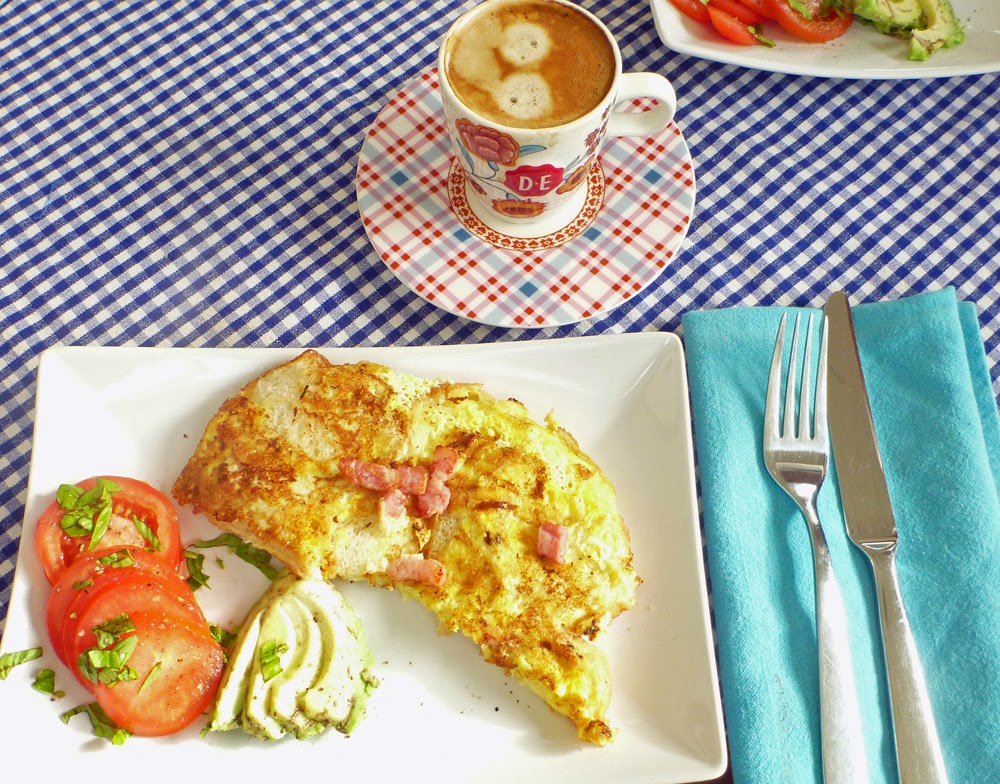 The following morning, As Edi prepared pain perdu for breakfast, I walked the 200 metres back to the previous lock to inform l’éclusier that we wished to continue across the summit, through the tunnels and begin descending the other side. 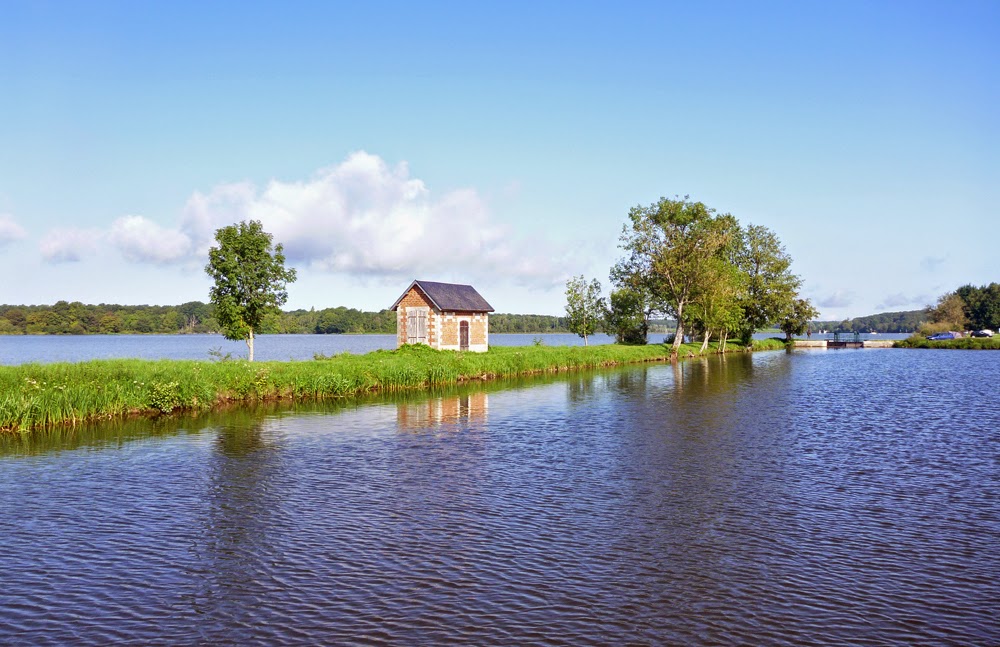 At 1010 we slipped and motored along the canal beside the reservoir toward the beginning of the one-way section. 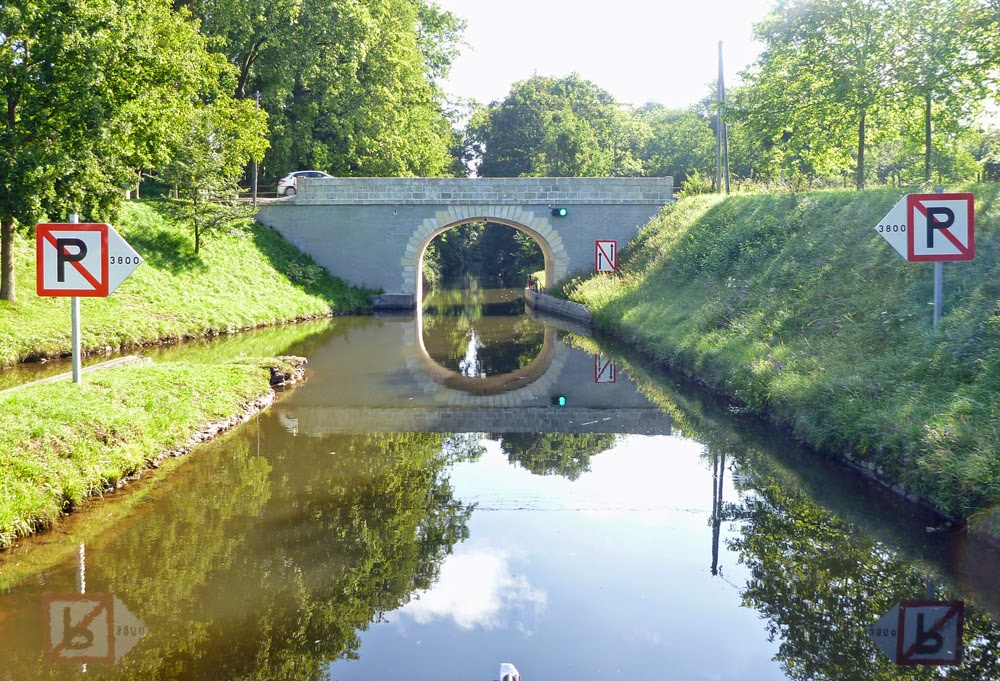 This narrow section is 3800 metres long and passes through deep cuts and three tunnels. The light was green for us as we arrived. 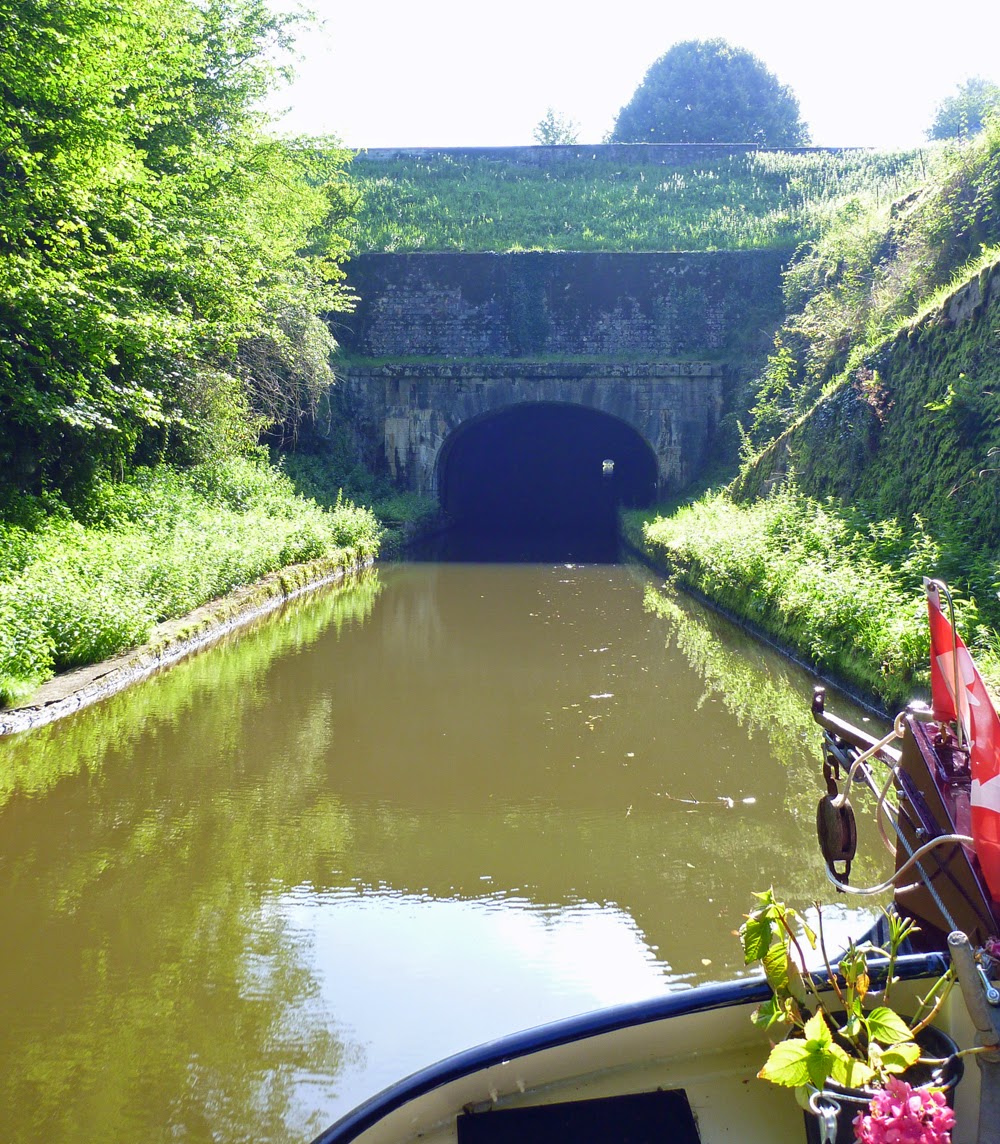 We approached the first of the tunnels and found it unlit. Fortunately, it is only 758 metres long and we could easily see the light at its far end. 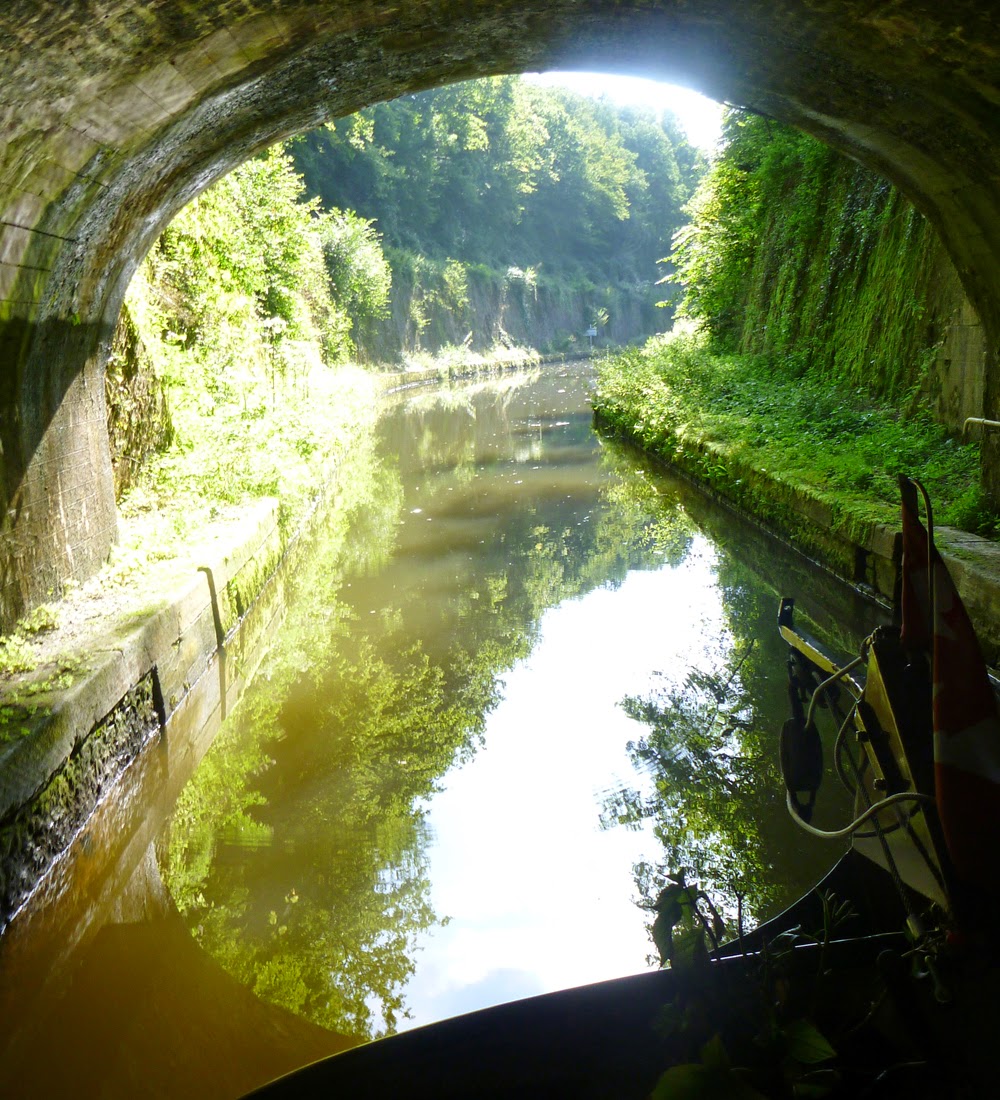 We were quickly through and heading into a deep, narrow cut. 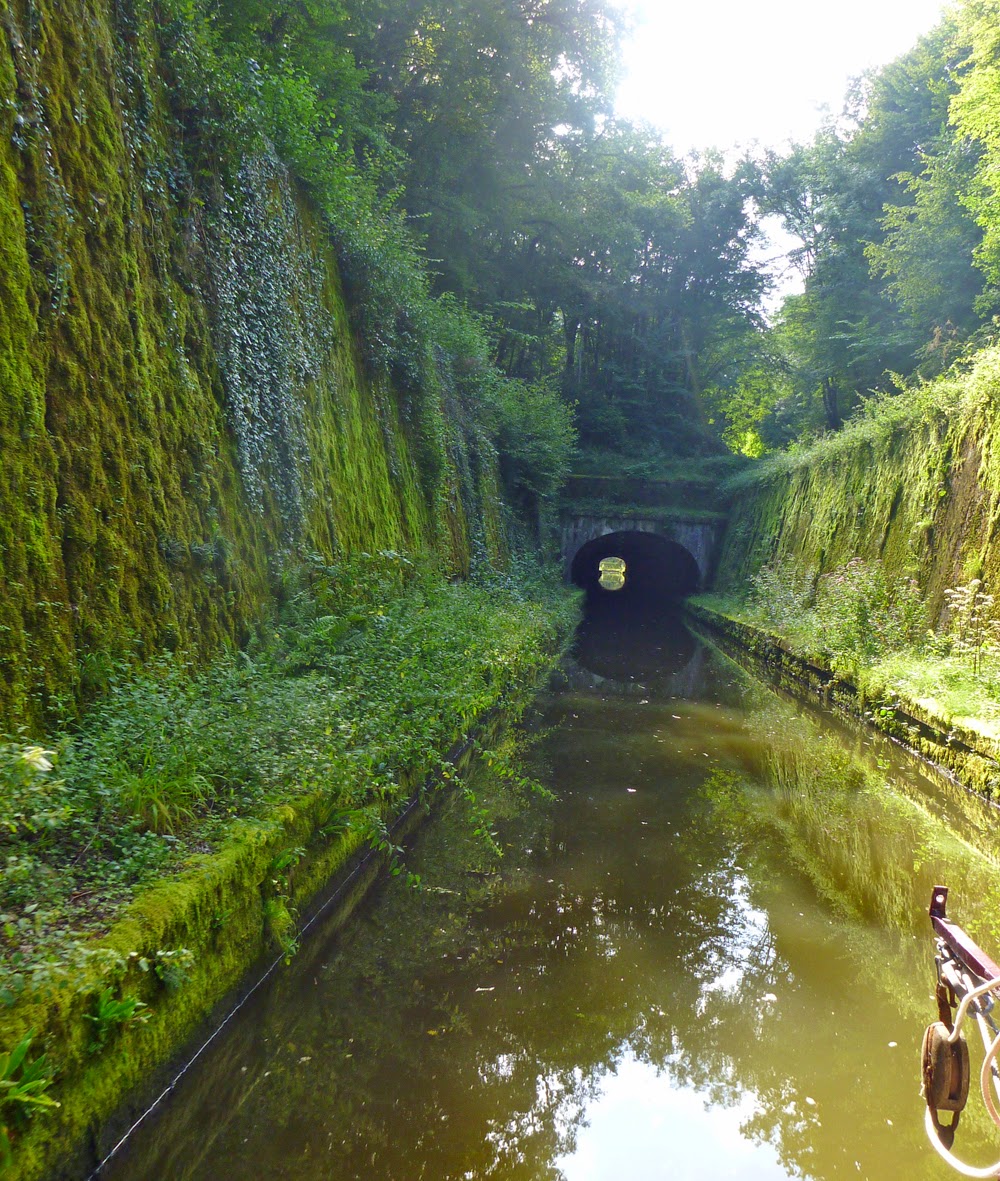 This led to the next tunnel, a shorter one at only 268 metres. 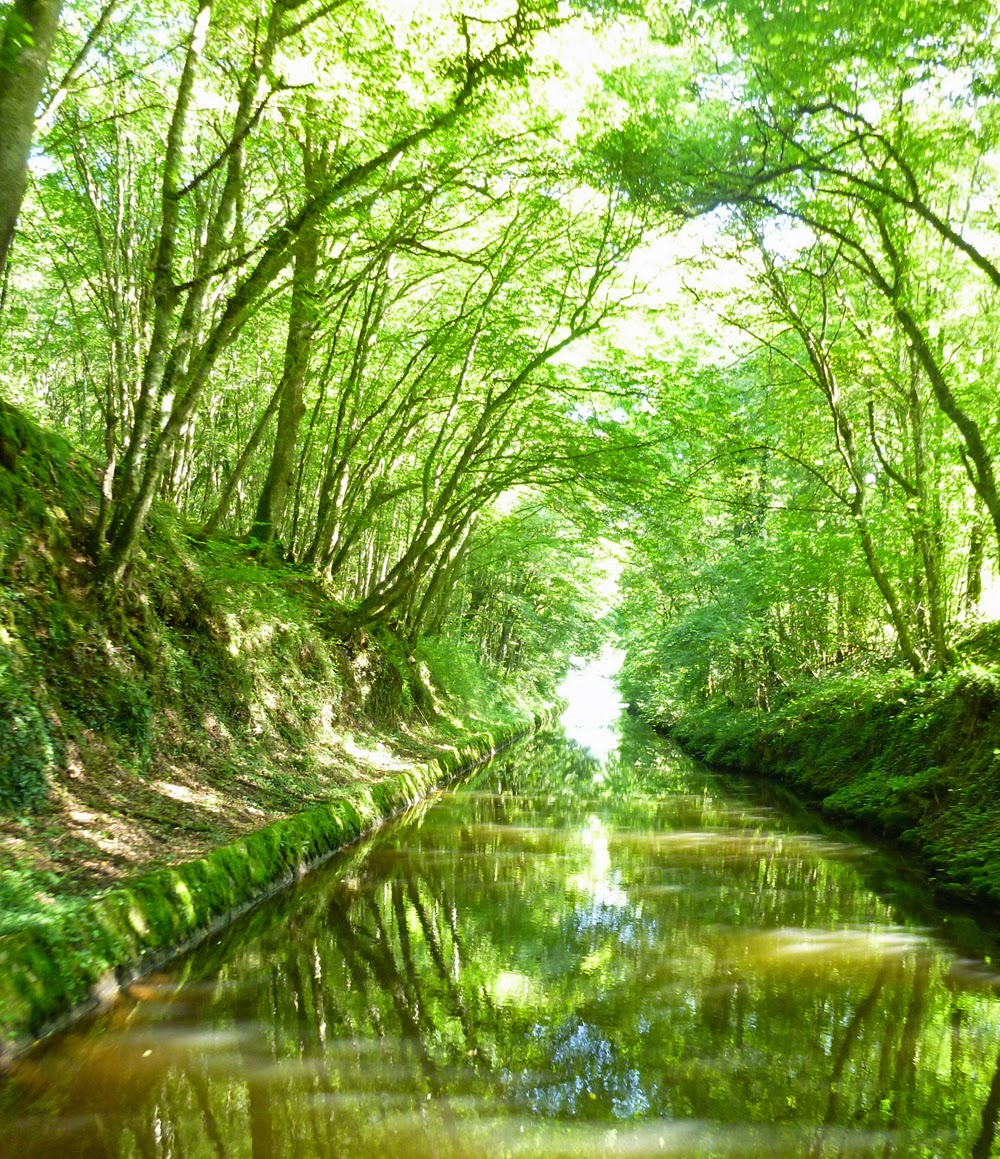 The third tunnel quickly followed and we passed through its 212 metre length and out into a long and wondrously serene trench through overhanging trees. 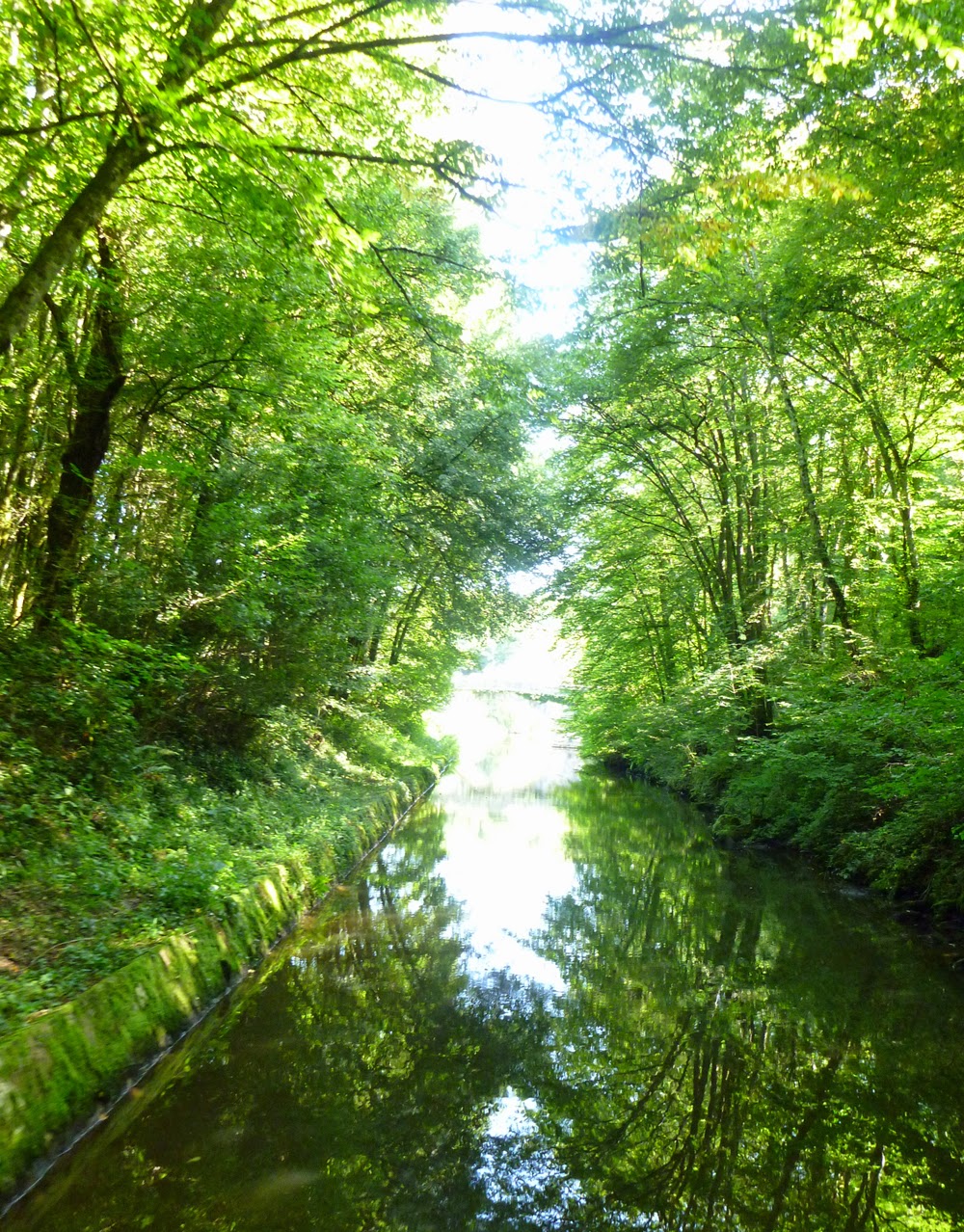 The trench is close to 1500 metres long, interrupted only by an abandoned bridge. As we neared the end of the trench, faint images of an arched bridge began to emerge in the glare of the light at the end of the vegetative tunnel. 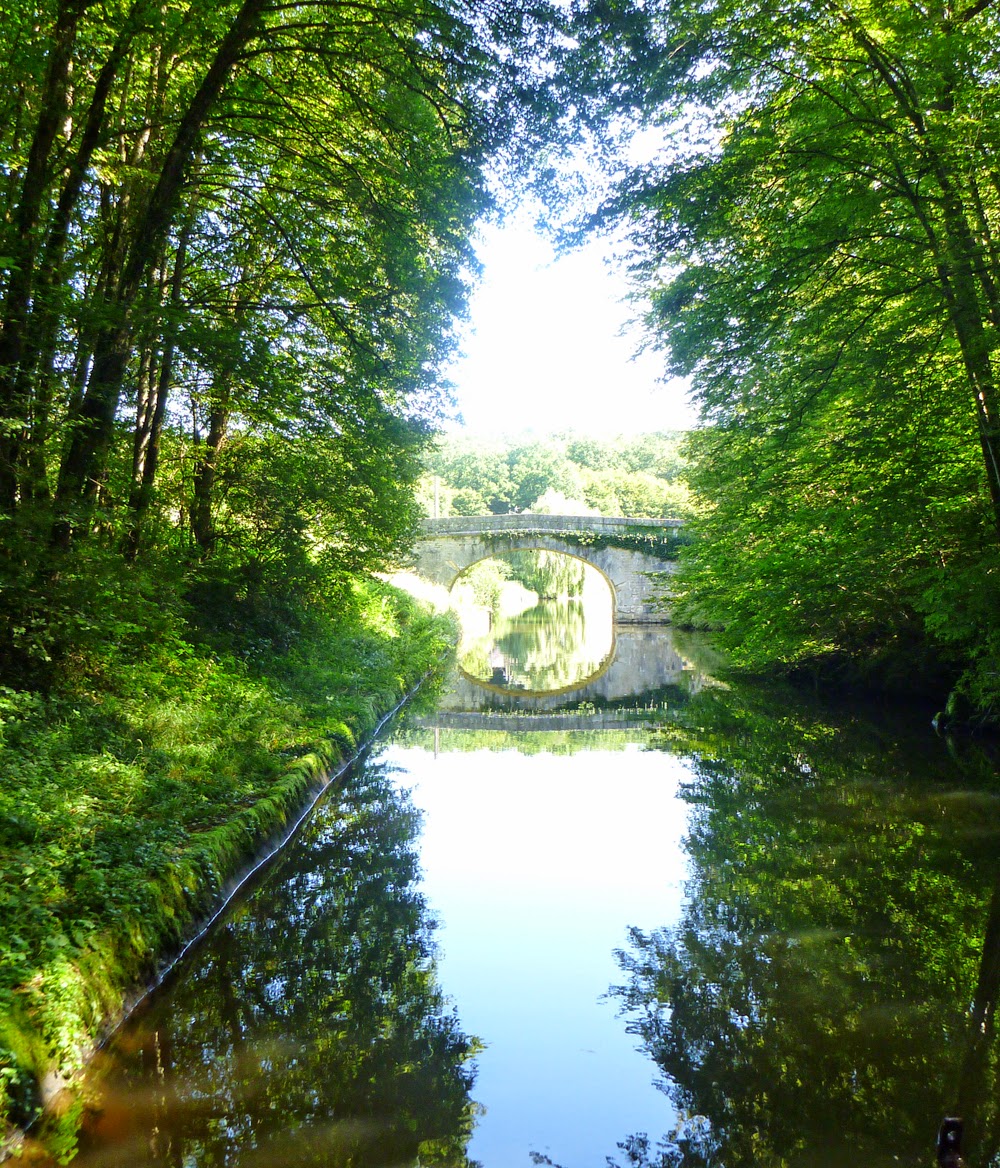 As we approached, these slowly resolved into a graceful stone bridge. 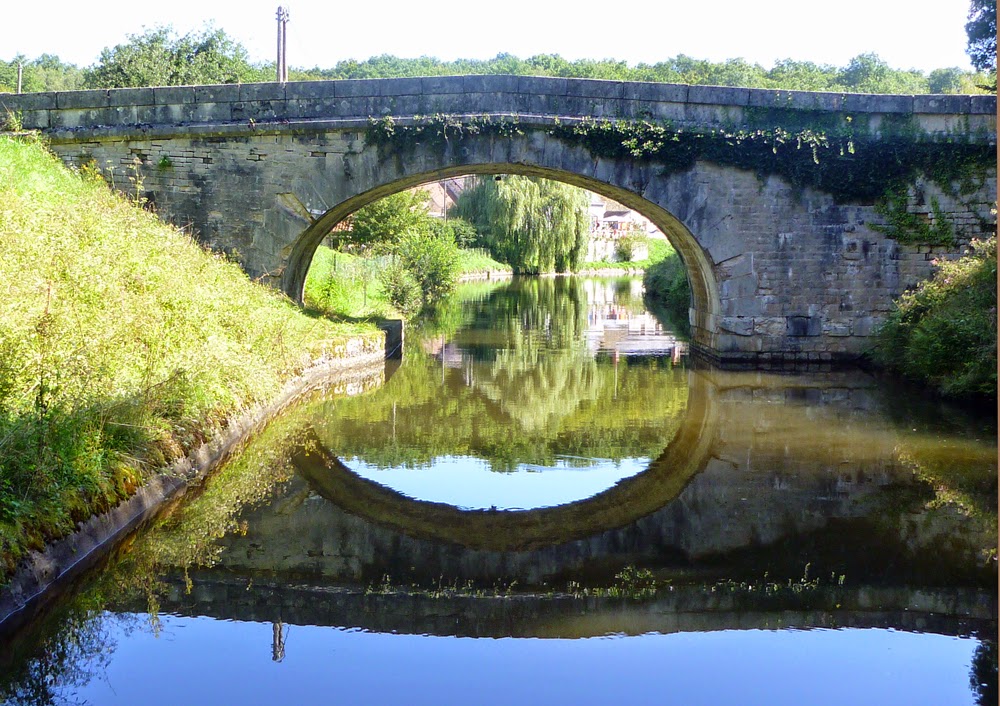