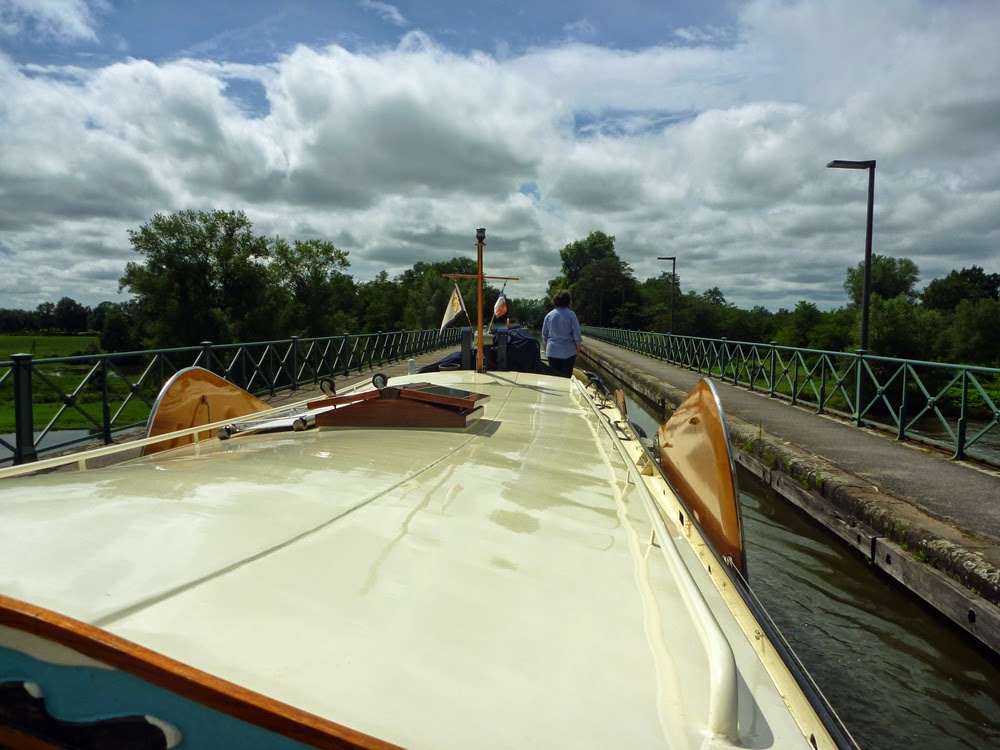 On Saturday, 9 August we motored through Digoin looking for the supermarket I had used several times in the past. Before I realized that the former supermarket had been converted into a building supply store, we had committed ourselves to the single-lane traffic of le Pont Canal de Digoin, the aqueduct across the Loire. The next turning basin was in le canal lateral à la Loire, beyond the lock at the far end of the aqueduct, so we decided to keep going and find food for the weekend somewhere along the way. 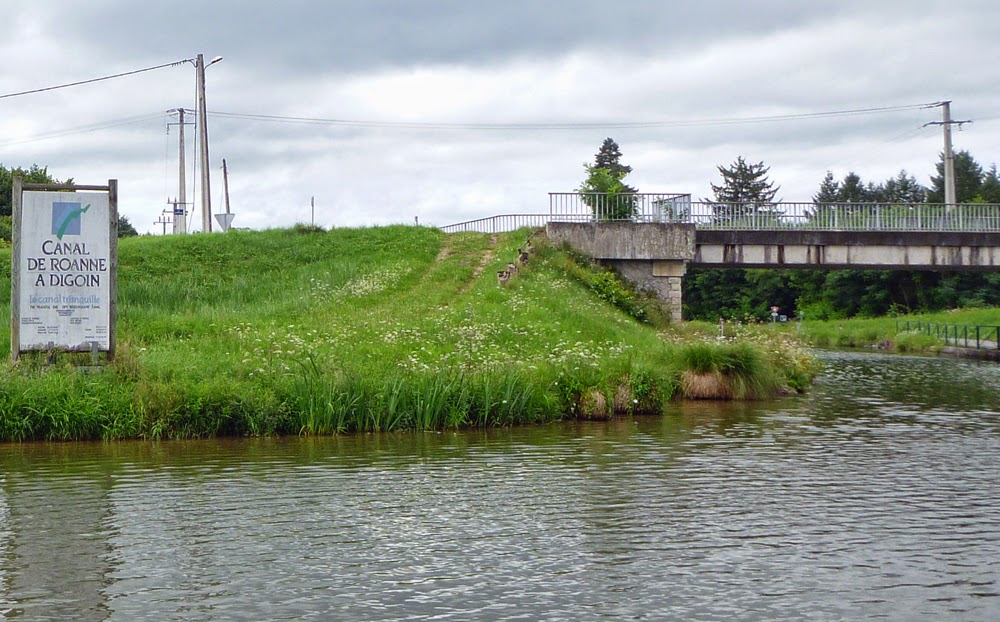 Just over a kilometre past the lock we turned left off le canal latéral à la Loire and into le canal de Roanne à Digoin. This 56 kilometre canal was completed in 1838 further  upstream along the Loire to link the city of Roanne to the rest of the canal network. 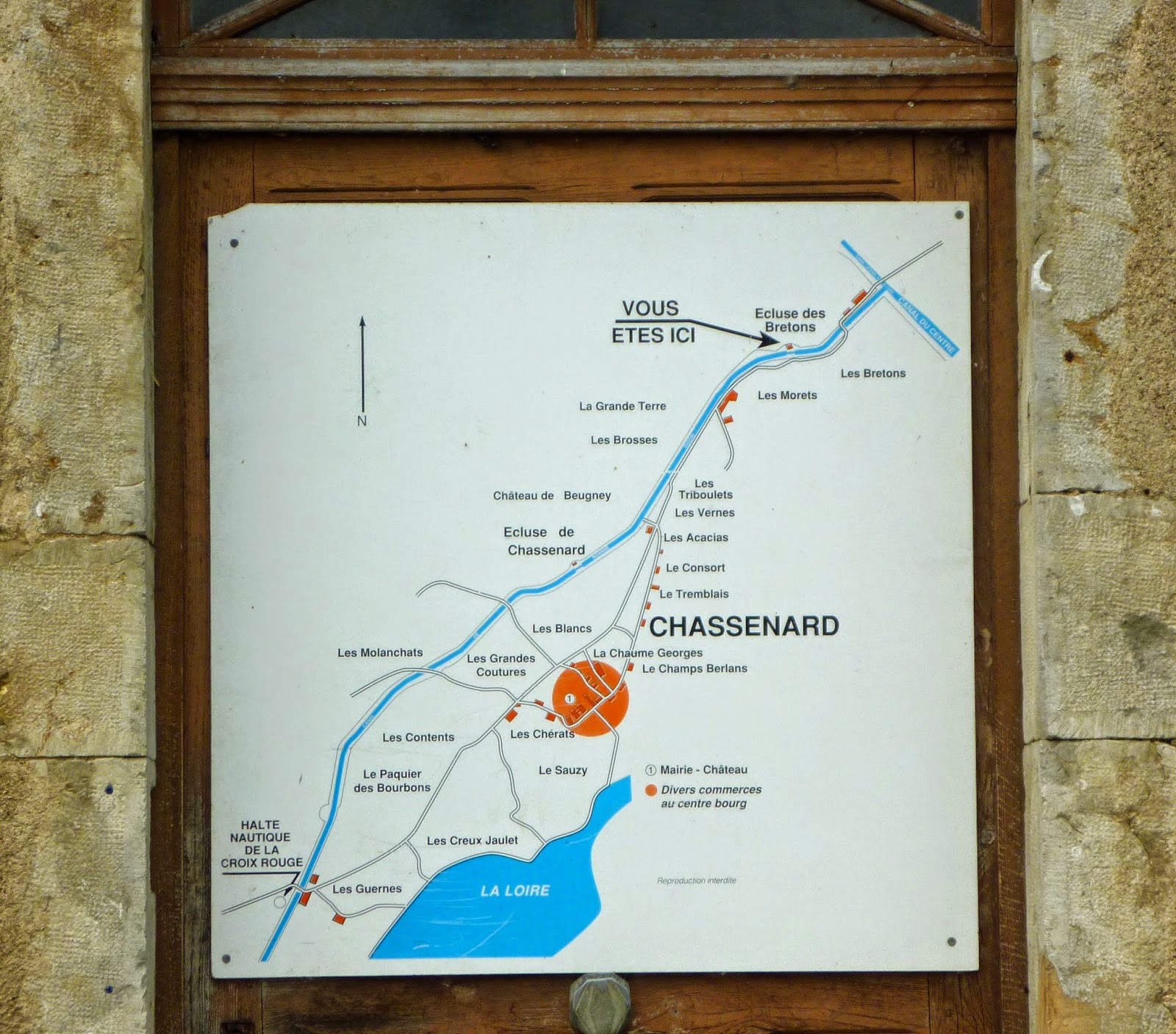 The map panel on the door of the first lock house showed us where we were and gave the names of communities around us, but there was no indication of any shops or services that might be in any of them. L’éclusier told us the closest supermarket upstream was a few kilometres east of Chambilly, across la Loire in the town of Marcigny. Our map showed Chambilly to be twenty-two kilometres and two more locks along the canal. It was just after 1400 and we saw there was sufficient time to make it before the store closed for the weekend, so we decided to press on. 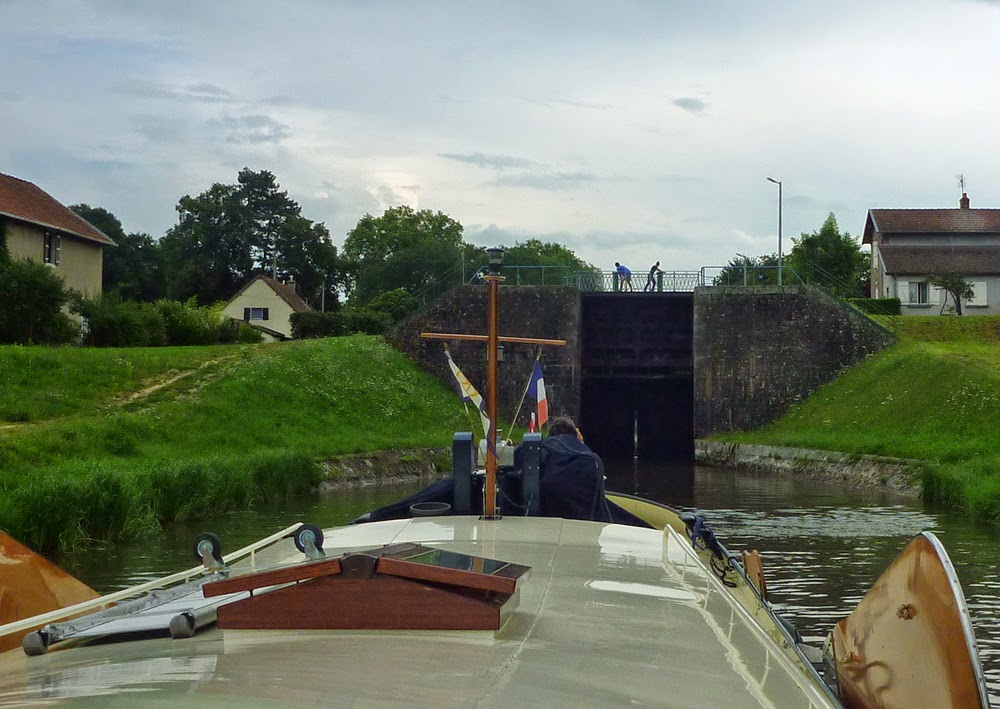 The next two locks are rather high at five and seven metres and neither of them was ready when we arrived, so it took a long time to work through. 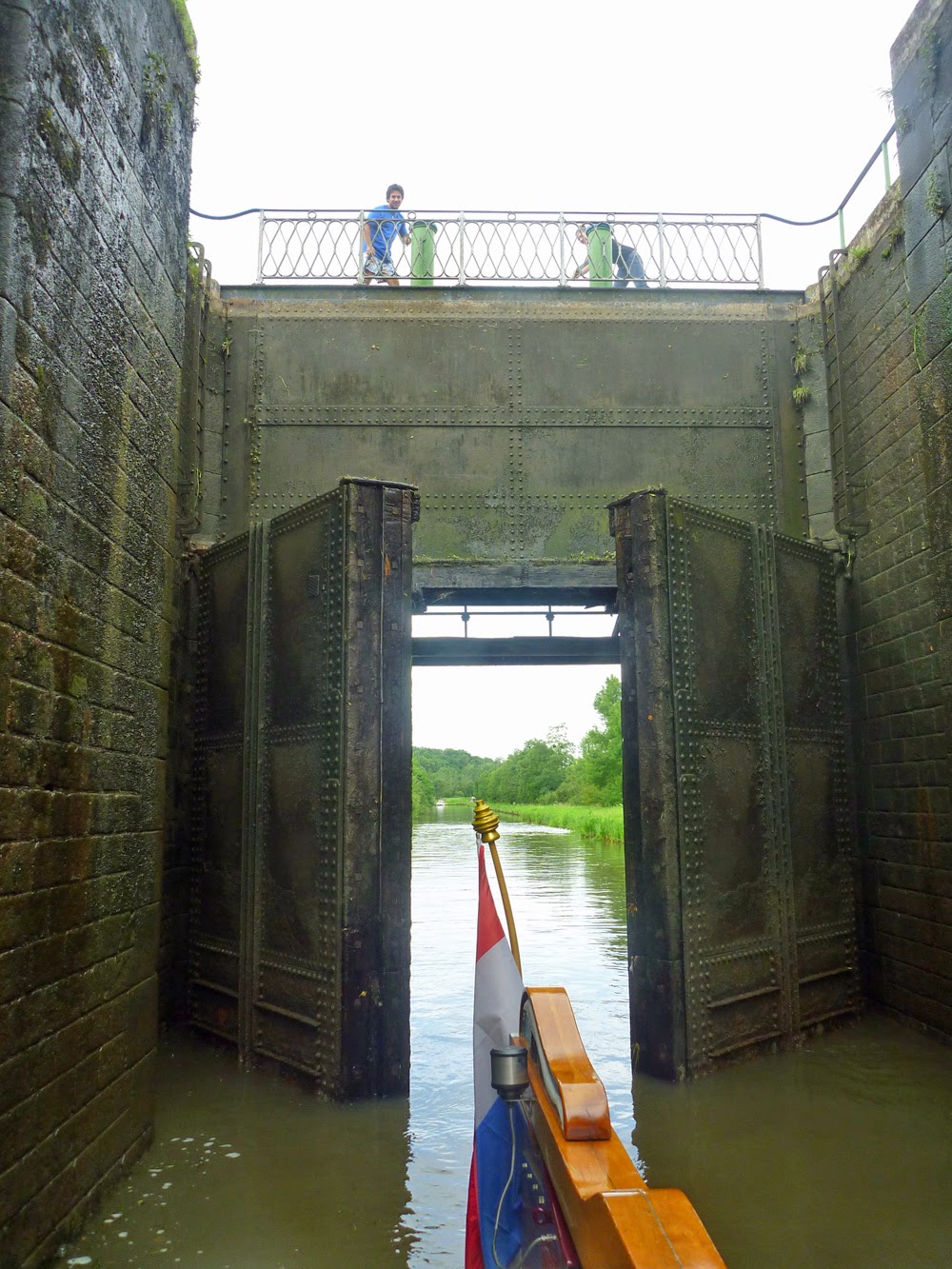 The second of these locks is so high that the downstream doors close against an upper jamb and the water fills to more than three metres above the door tops. 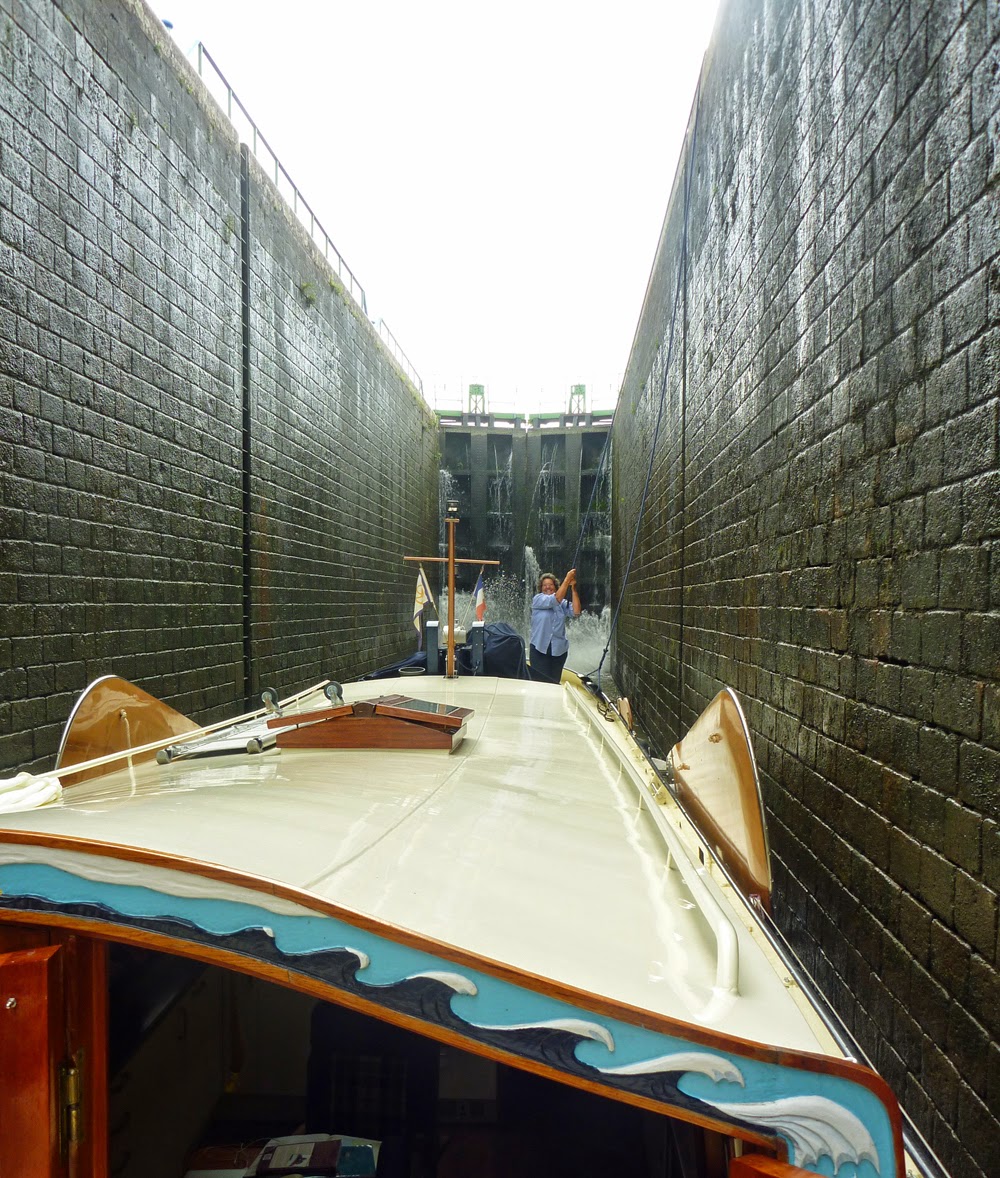 At 1745 we secured in the small basin below the fourth lock in Chambilly. I unloaded my bike and pedaled across the river and found the Atac supermarket to restock our fresh supplies before France ground to a halt. Shortly after I had returned to Zonder Zorg, the skies opened up with a torrential downpour. As the evening progressed, the lightning became closer, many thunder claps occurring within a few seconds of the flashes, some almost simultaneously. 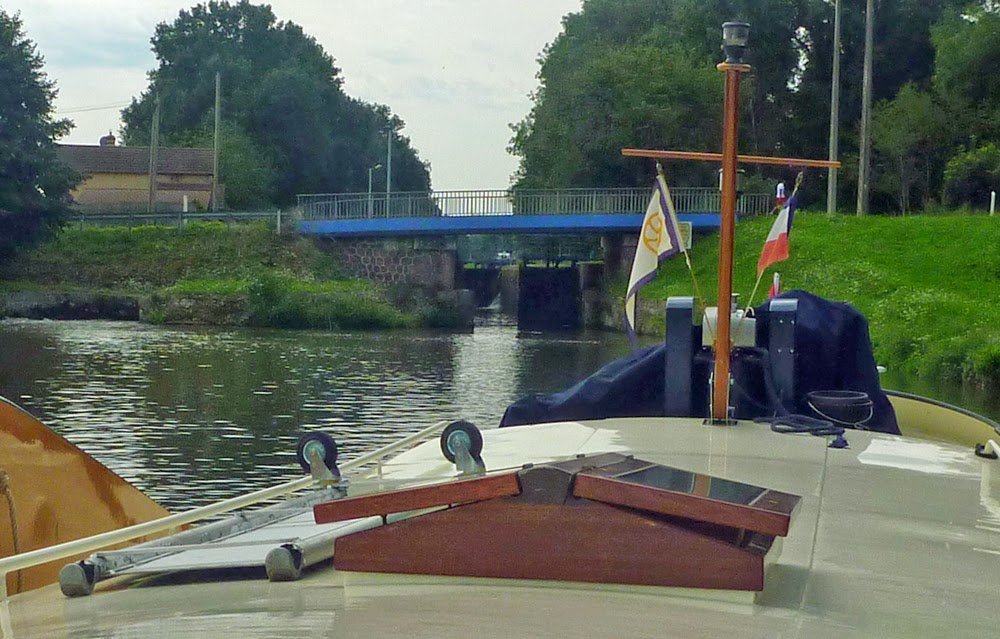 After a sleep-in on Sunday morning, I walked the kilometre to the boulangerie for a breakfast baguette and paused at the lock on the way back to inform l’éclusier that we wished to pass through his locks at 1100. There are three locks in quick succession and he began preparing them for us. When we  slipped forty minutes later he was opening the last gate for us. 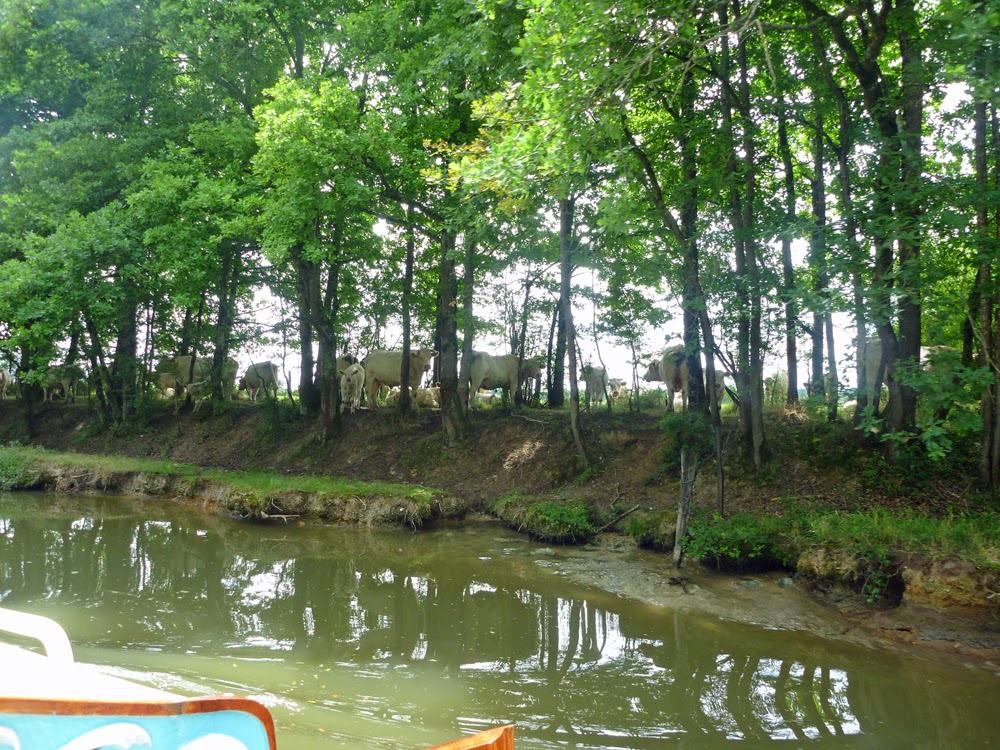 We passed through the three locks, and just before the system closed for lunch at noon, we entered an eighteen kilometre pound to the next lock. In many places the banks of the canal have collapsed and there are shallow shoals well out into the channel. The grazing cattle take advantage of the easy access to drinking water. 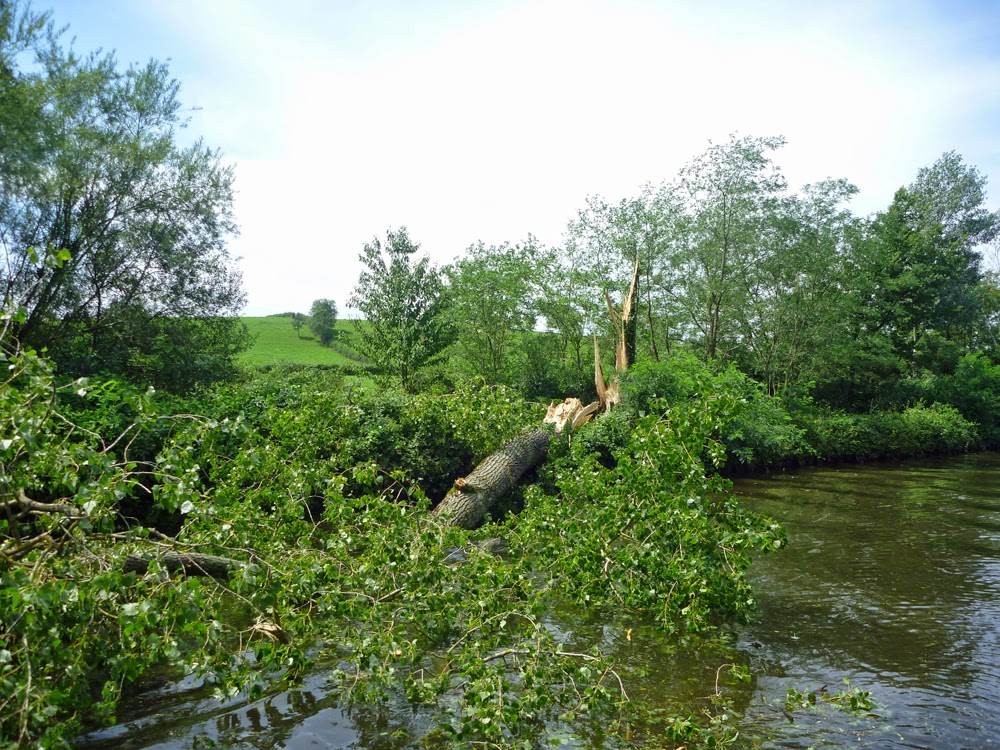 Along the banks we also saw signs of lightning strikes from the previous evening’s storm. At one place there was a mature tree fallen into the canal, nearly blocking it. 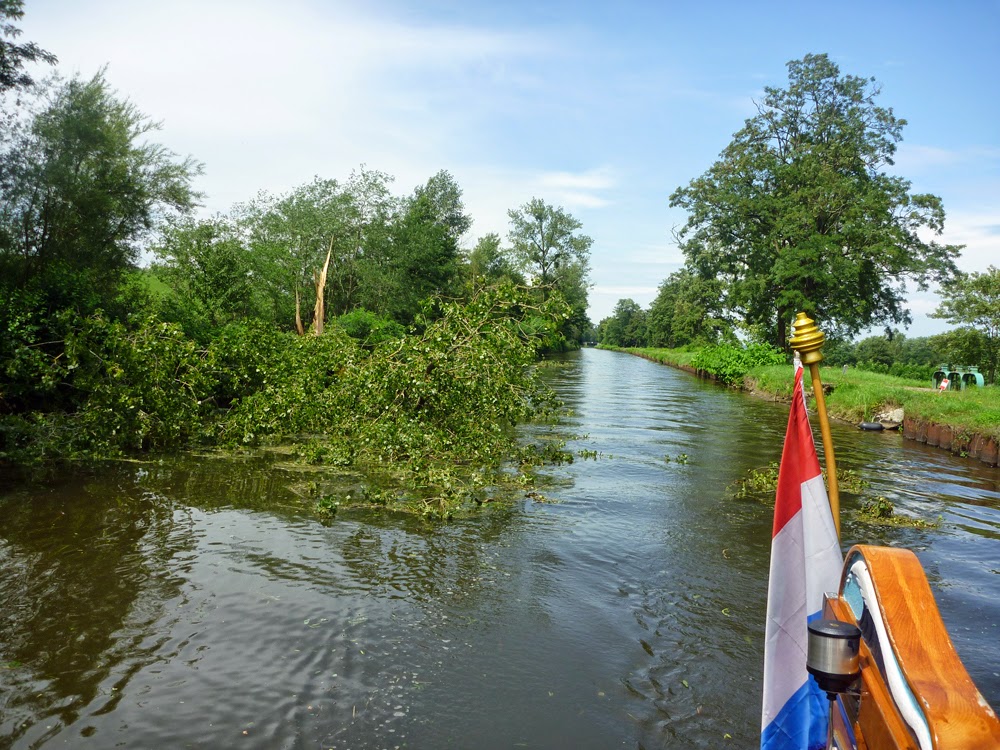 We coasted over the upper branches of the tree with the engine off. This allowed the momentum of the hull to depress the limbs as we passed over and prevented snarling and possibly damaging the propeller. 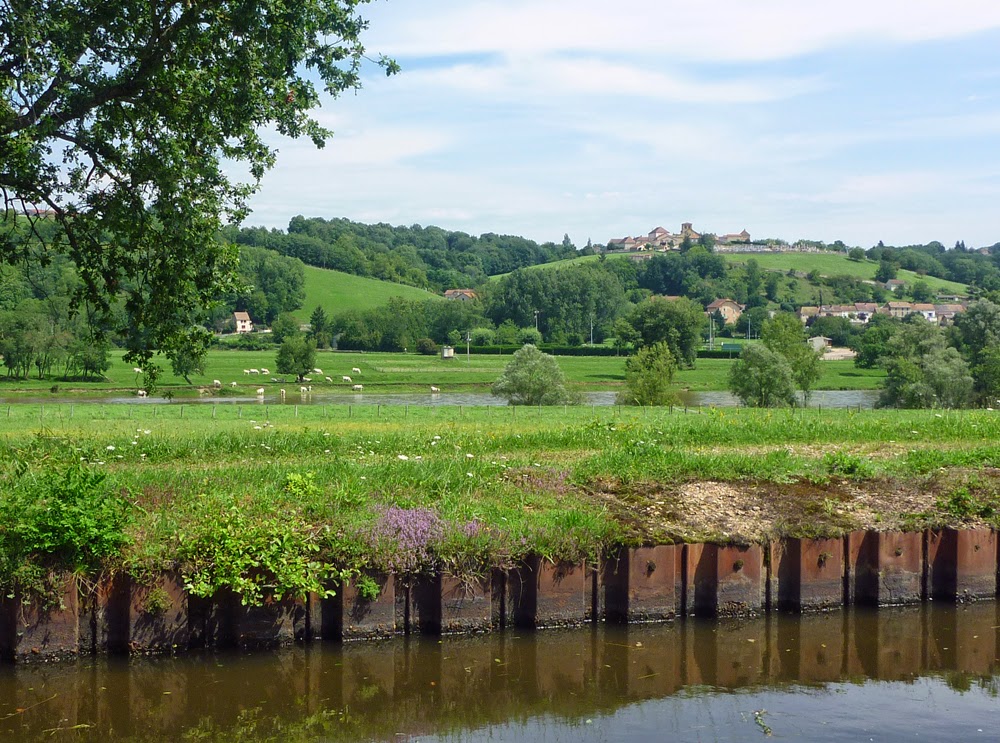 Below and to the east of us flowed the Loire with Charolais cattle grazing beneath riverside farms and hilltop villages. It is a very tranquil canal. 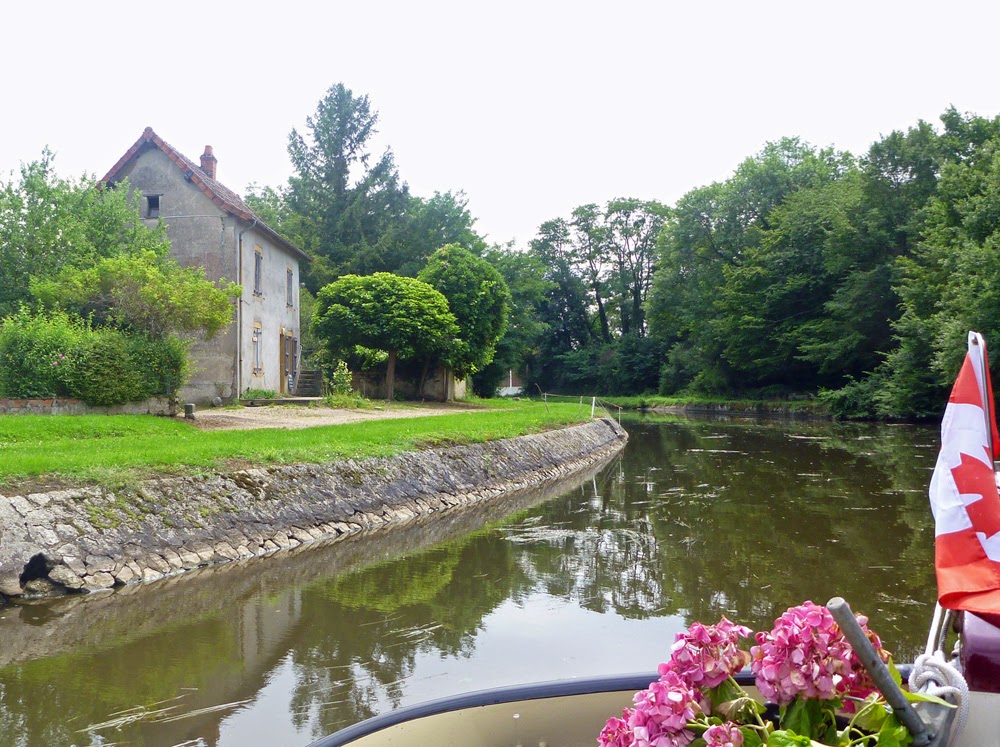 We passed through peaceful villages. 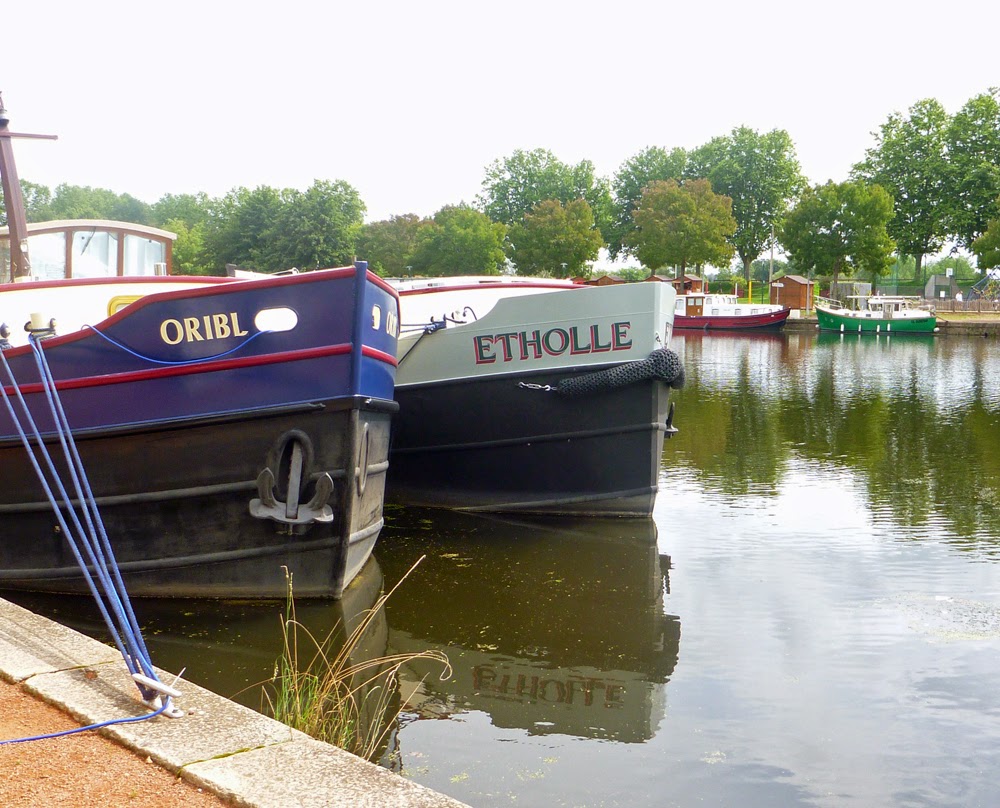 At 1645, after another three locks, we entered the basin in Roanne and secured to rings on the masonry quai. We were at the blind end of the canal. Moored along the quai were many barges, a couple of them named rather like the words we used to describe some of the horrible and a-hole boaters along the way. 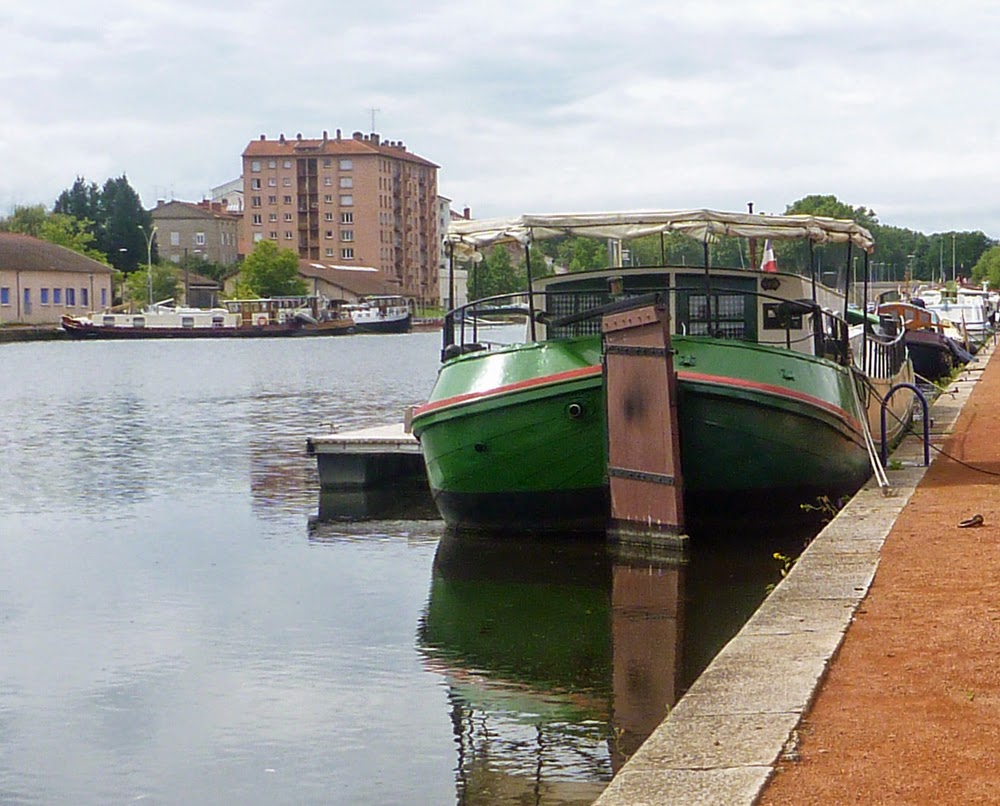 Moored astern of us was a small tjalk, which we recognized immediately. It was the online brokerage listing of this particular barge that moved our thinking from another modern cruiser to a converted tjalk. On our way up the Brazilian coast from Cape Horn we had pored over her photos and details and had exchanged many emails with the broker. The photos showed the interior to be chaotic and in need of gutting, but the broker remained firm with the price. Seeing her here in Roanne, still listed by the same broker but with the price now slashed dramatically to well below what we had been willing to offer two and a half years previously, we were delighted the broker had been firm with the price. It was a great lesson in patience. 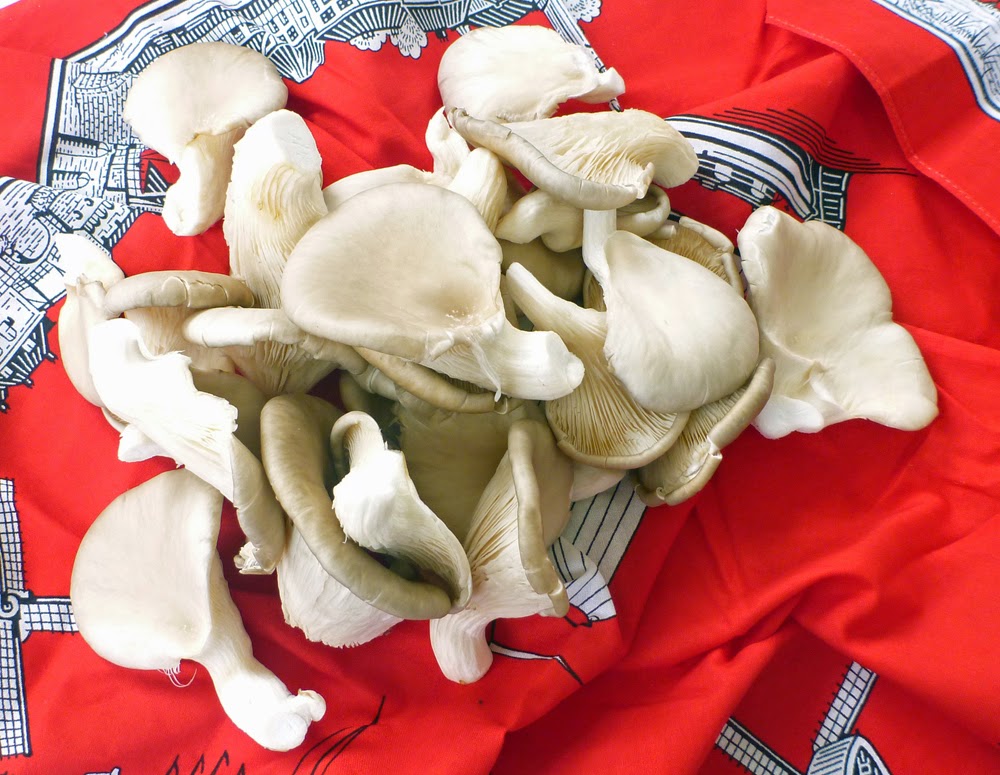 The following morning we walked across to les  Halles, the covered the market to find it closed on Mondays. We asked a passerby where we could find a supermarket and were directed around the corner. Inside we found a wonderful selection of fresh produce, including the finest pleurottes we have seen in France. Here was more evidence that the supermarkets are bettering the traditional markets, not only with selection and price, but also with freshness and quality. Also, they are open. 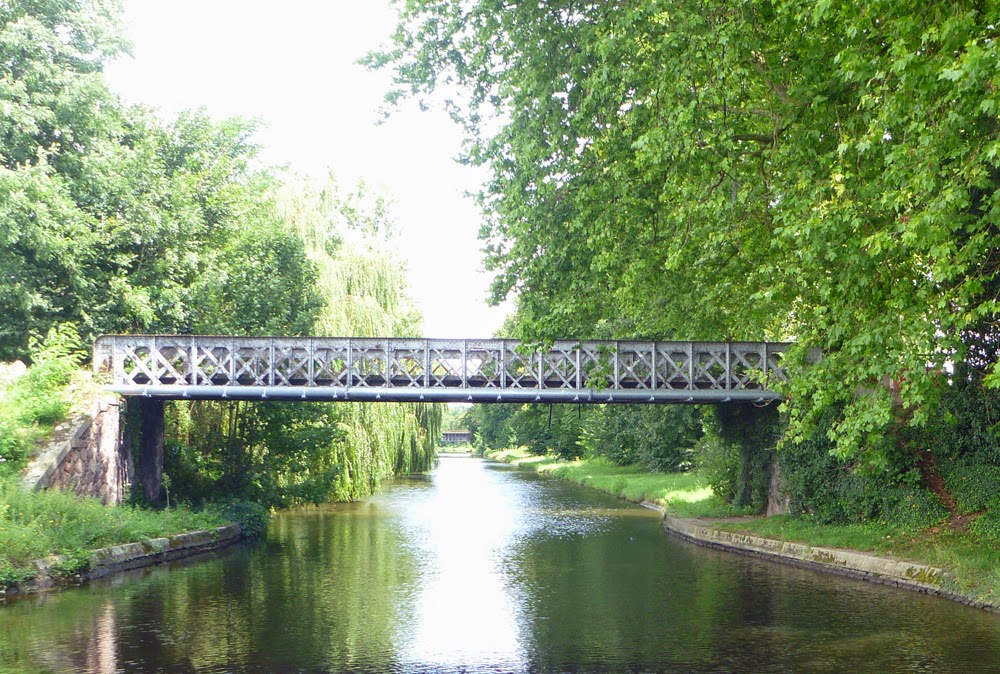 We could find very little of interest in the city to keep us longer, so shortly before 1300 we slipped to head back through the lock and down the canal out of the urban environment and back into the pastoral. 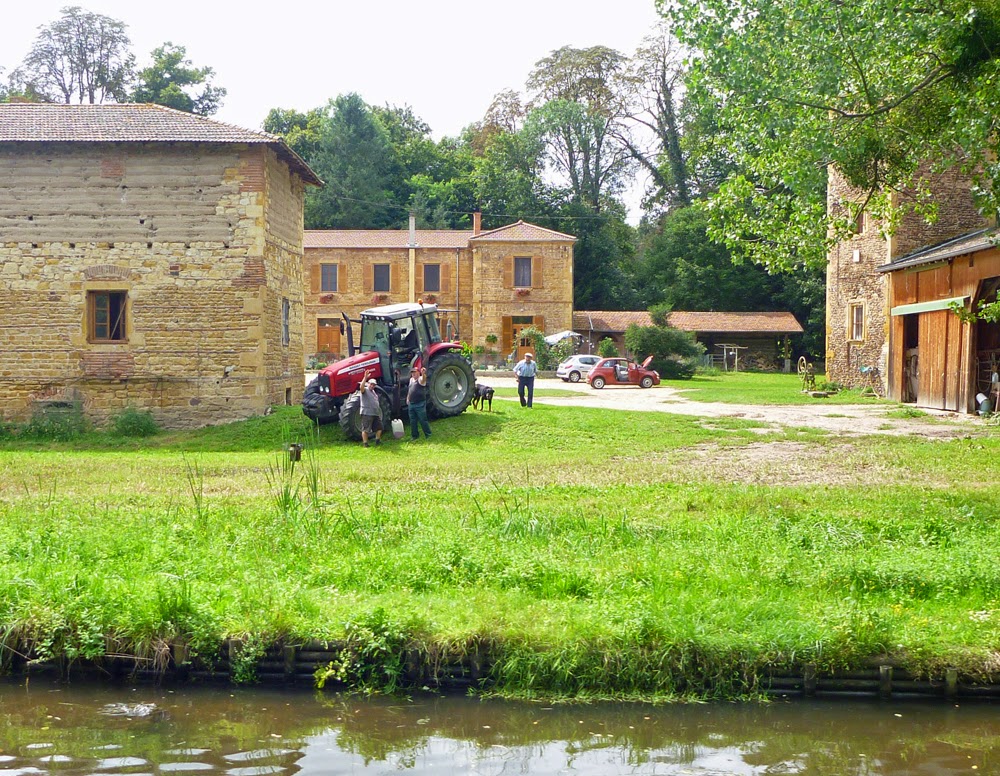 Along the way we passed fine agricultural estates that had obviously been built, expanded and operated by many generations. 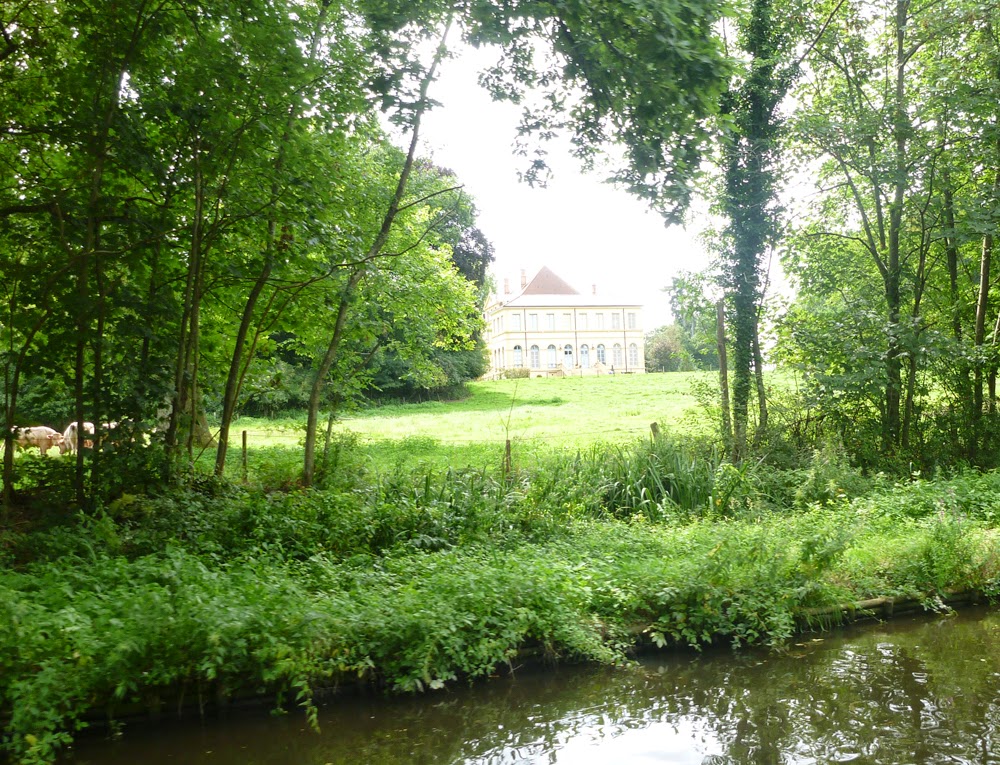 Here and there we passed more modern seventeenth and eighteenth century homes that had been built to add to the farmers’ comforts. There is a look of longstanding general prosperity through the area. 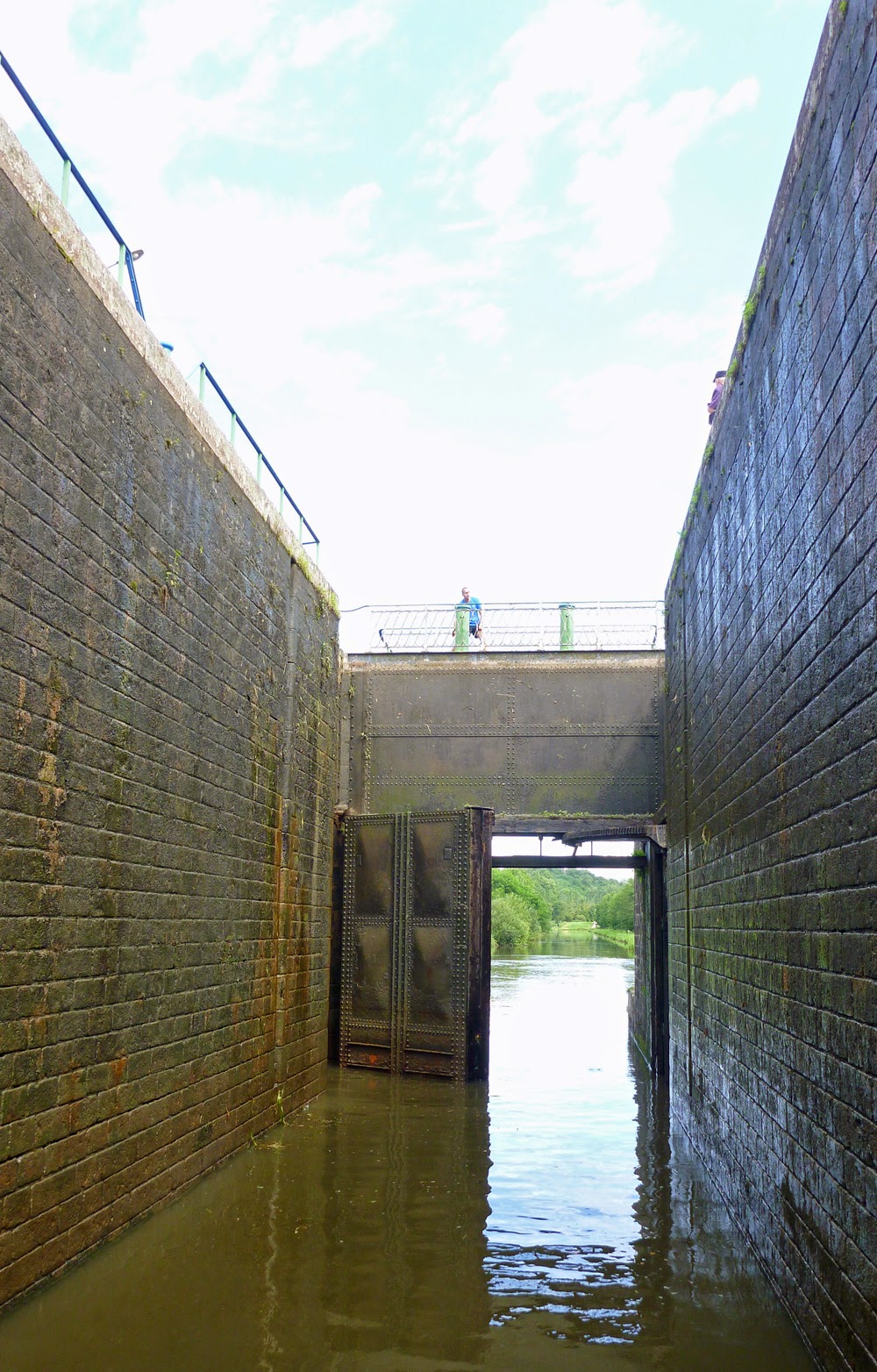 At 1820 we paused for the night just above the series of locks leading down to Chambilly. L’éclusier came by to ask what time we wished to continue down through the locks; we said 0900. On Tuesday we waited for the lock to be prepared and after half an hour of no action, I went looking for l’éclusier. He had drained all three locks in preparation for an up-bound Zonder Zorg. It took him a while to realized he had misread the instructions in the lock book. He had to refill all three locks and we were delayed well over an hour. 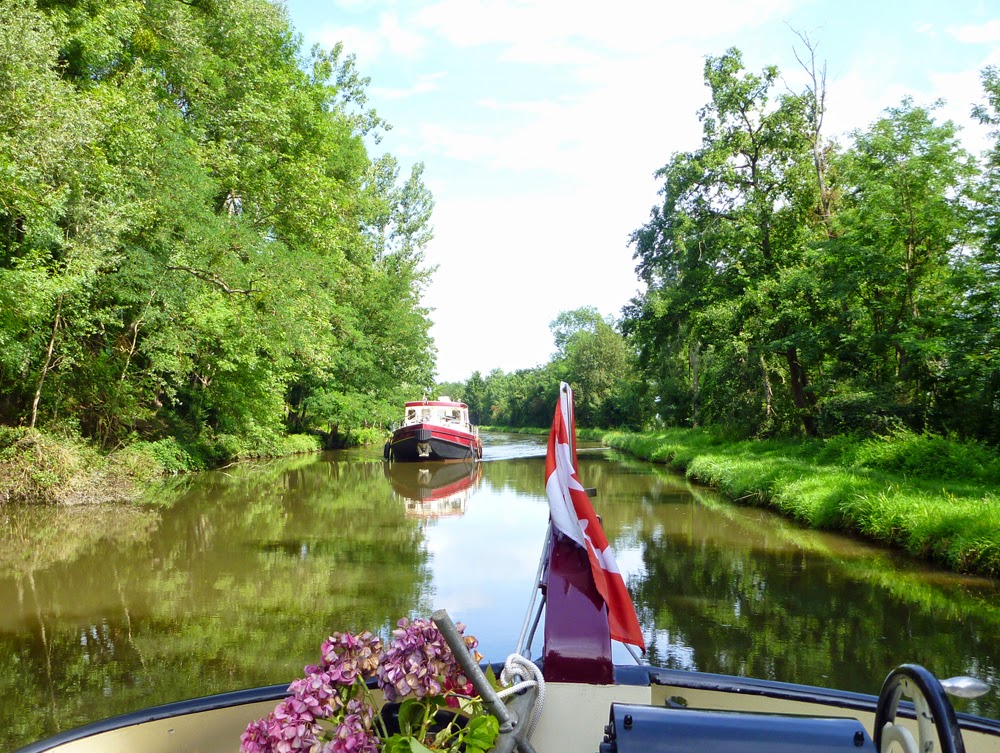 We met very little traffic on the canal, both coming and going. When we did meet the few boats, we had to be very careful not to run aground on the shoals that often extended far out from the banks. 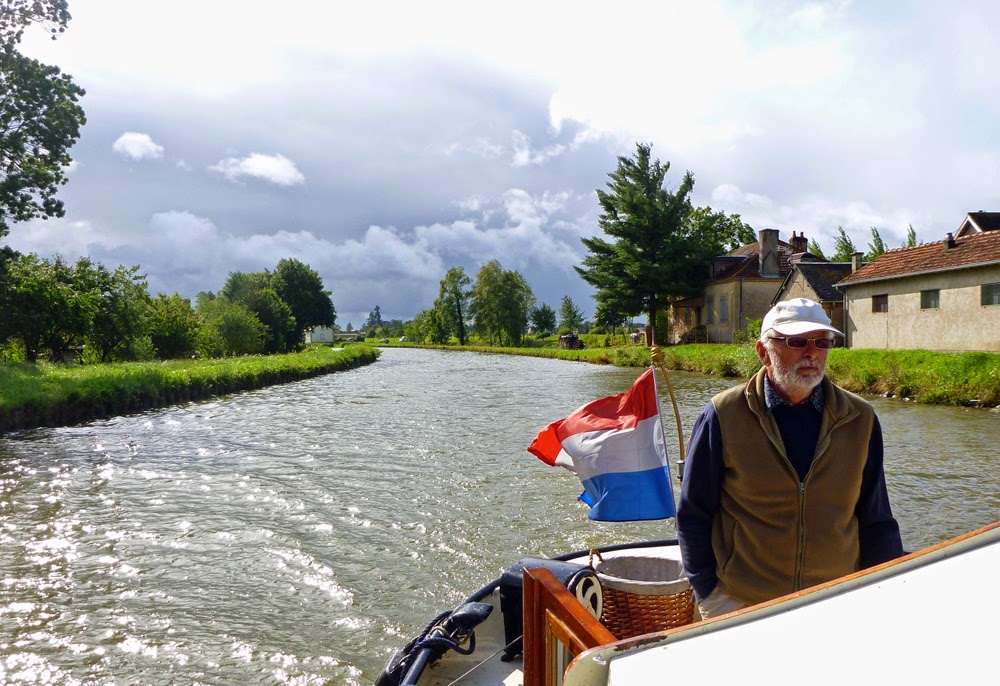 Shortly after 1500 we came to the mouth of the canal and reentered le canal latéral à la Loire. We turned to port and continued downstream. The unsettled weather of the previous few days appeared to be settling on being cold and wet. We were still in the first half of August and we were wearing multiple layers of fleece. Shortly after 1700 we secured to bollards on a quai in Pierrefitte-sur-Loire and scurried below as the first wave of thunderstorms hit. 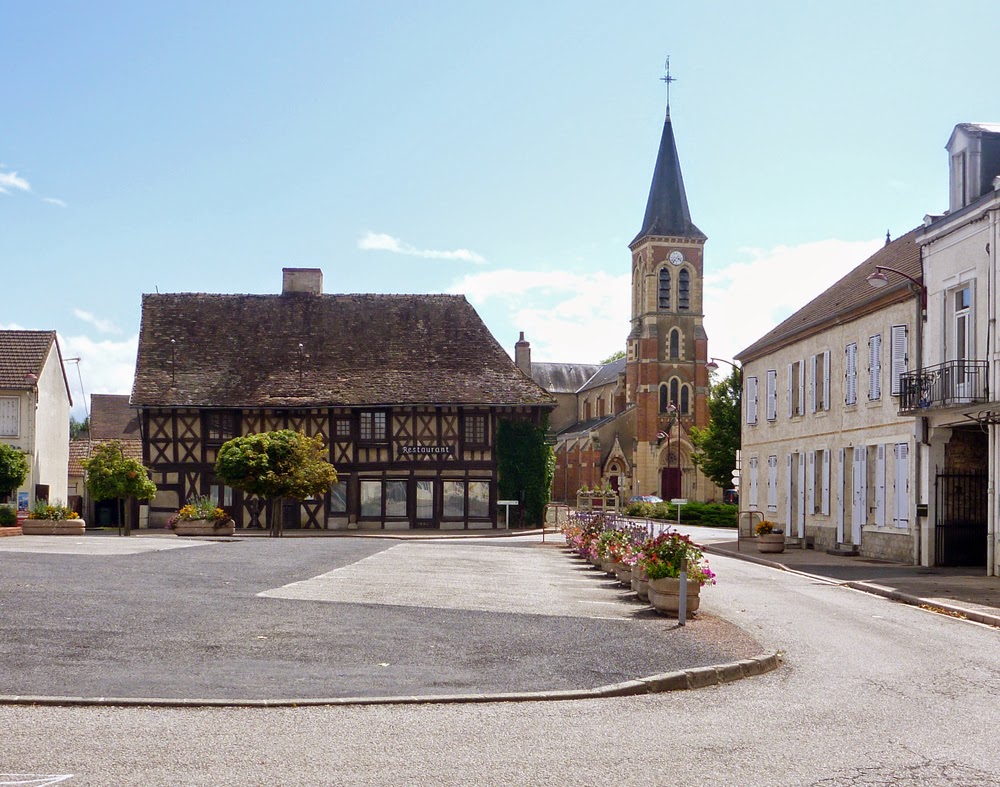 On Wednesday, after a leisurely breakfast we continued down the canal another nineteen kilometres and five locks to Beaulon, where we secured for the day at 1410. We walked the long kilometre into the town to find the bakery and épicerie advertised on the canalside signs. The town appeared abandoned. Both bakeries were closed, one for August holidays and the other for its regular Wednesday closure. 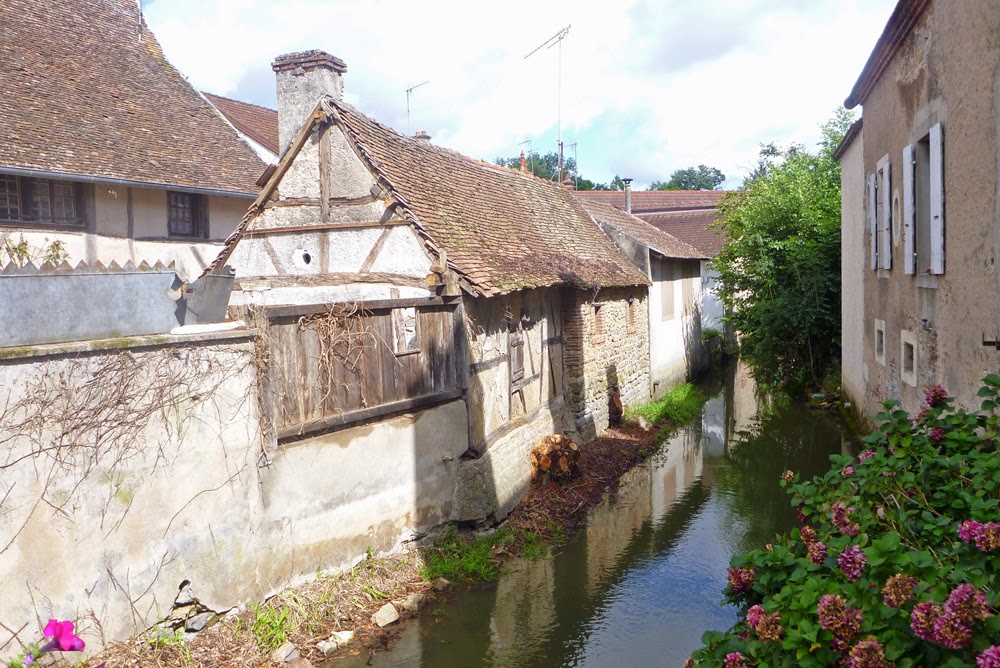 We strolled around the very pretty village looking at the sights and searching for the épicerie. It was also closed Wednesdays. 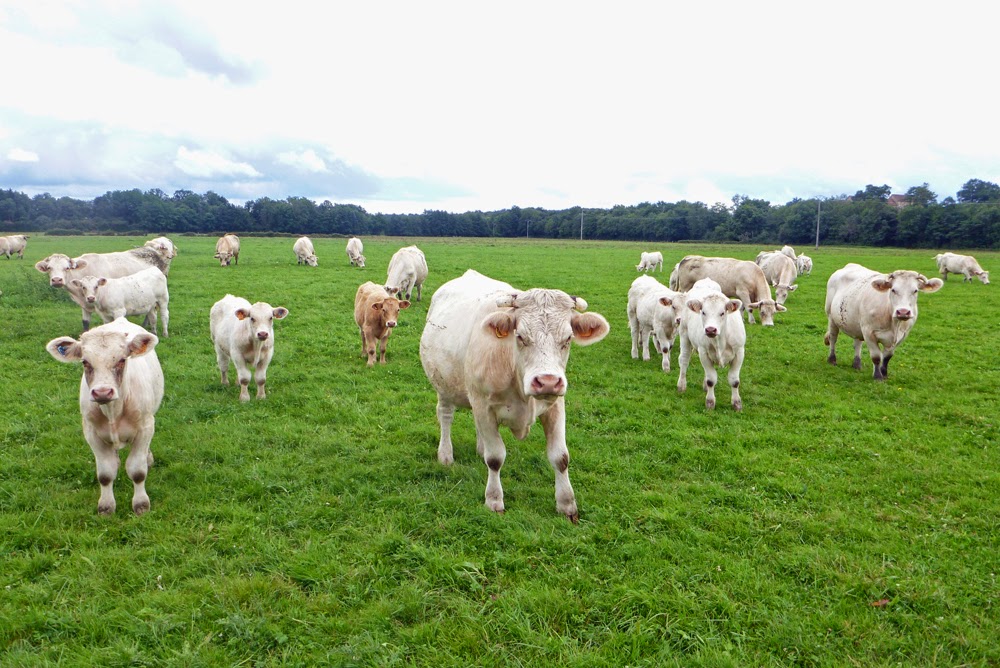 On our way back to Zonder Zorg, the local Charolais cattle seemed curious to see if we had had any success with our shopping. 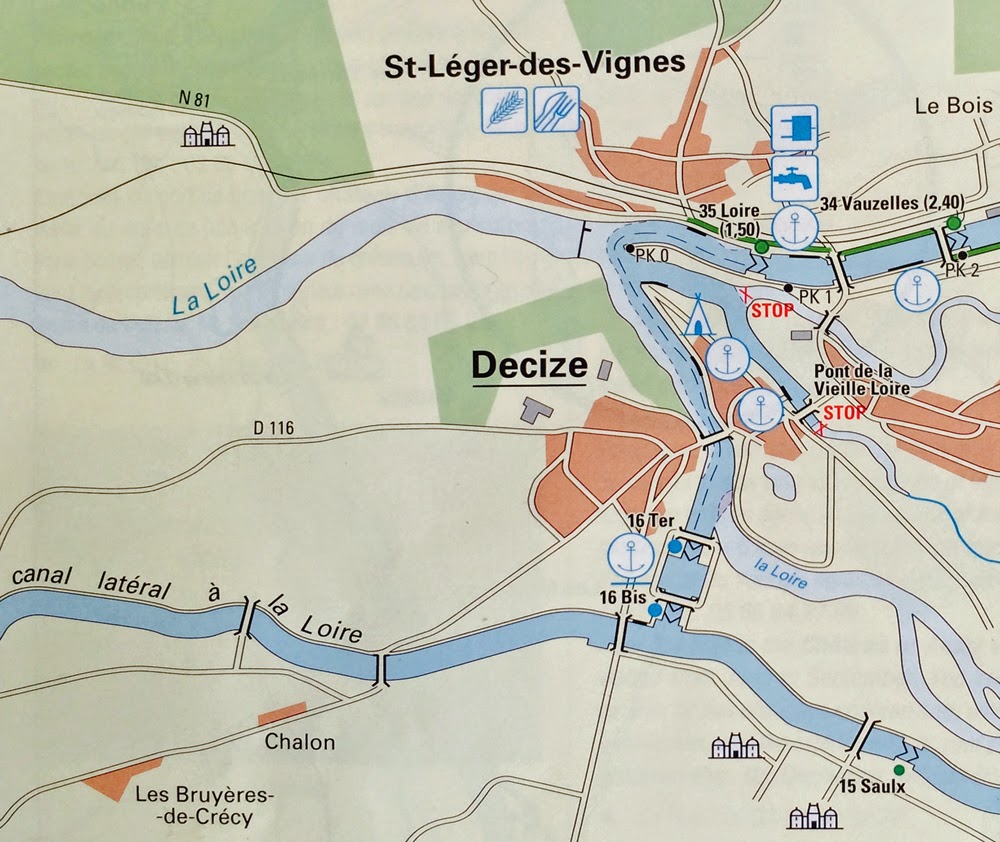 Thursday morning we slipped at 0945 and continued through another seven locks before leaving le canal latérel à la Loire and passing down through two locks into la Loire at Decize. As we left the second lock the skies opened in a torrential downpour. Edi scurried below while I navigated down the swiftly flowing river, under the bridge and found an eddy on the right bank to help me make it alongside a concrete quai in the blinding rain. At 1520 I secured to bollards, shut down and went below out of the storm. Less than a kilometre ahead was the beginning of le canal du Nivernais.
Posted by Zonder Zorg at 05:47