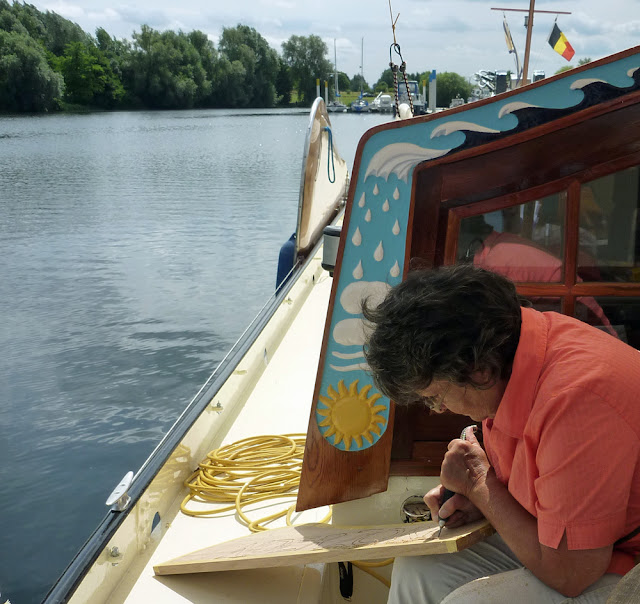 We paused in Maastricht to complete a short list of outstanding items, some of which were essential for our entry into Belgium. The guides, online forums and blogs all talk of the strict control by the Belgique authorities on arriving boats. There is mention of a checkpoint just inside the country where all arriving pleasure boaters must stop and have their papers, certificates, licenses and their boats inspected. Among the items we needed to complete was our new Zonder Zorg name boards. Edi continued chipping away at the task. 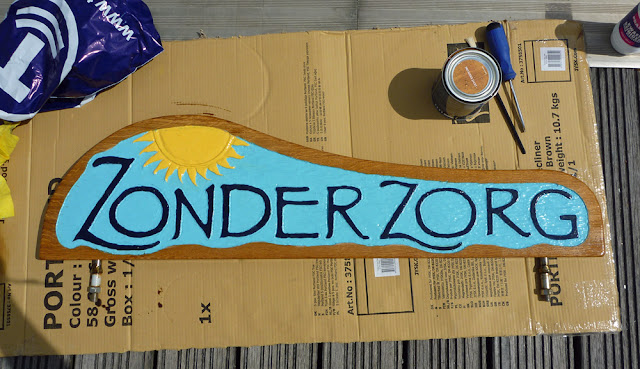 Edi finished one name board and applied two layers of paint to match the artwork on the klick and the fries. 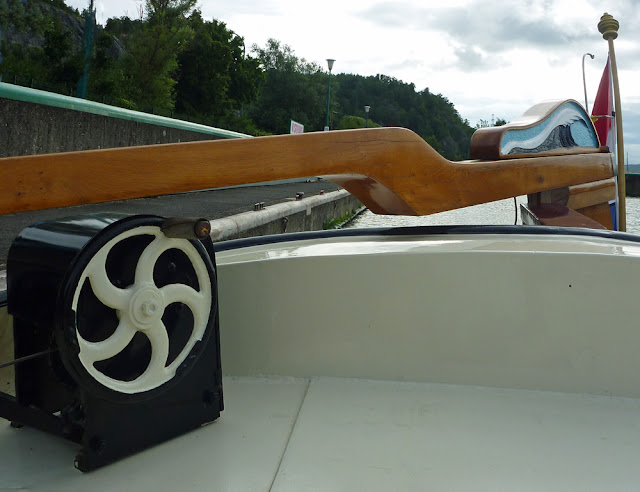 While she was at it, I repaired and restored a few spots on the fries and she repainted it and the klick. I also painted the spokes in the two leeboard winches and the anchor windlass. 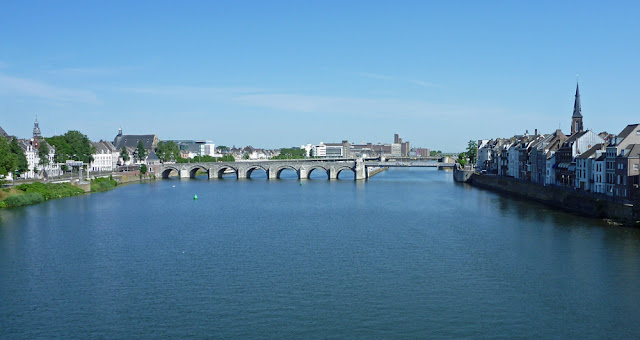 It was not all work; we pedalled into Maastricht nearly every day to shop and to look around. It is an old city. Neanderthal remains have been found here and there are many Paleolithic remains from 8000 to 25,000 years ago. The Celts lived here 2500 years ago and by the first century it had become a Roman settlement. 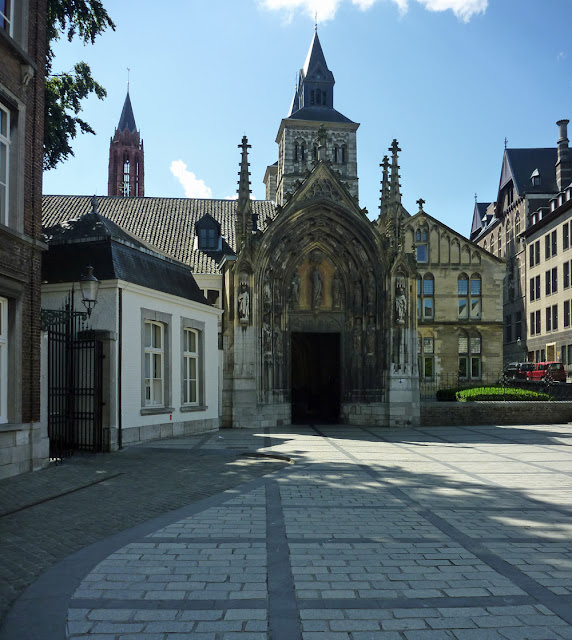 We wandered the centre of the old city, pausing here and there to visit interesting looking buildings. Mostly, we were filling time while we waited. 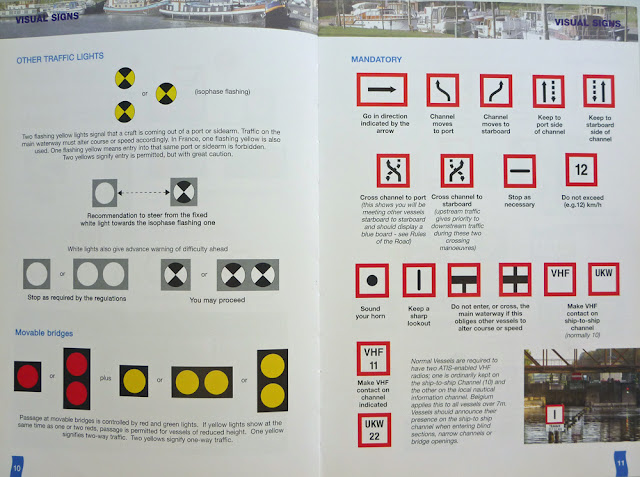 We were waiting for my International Certificate of Competence with a Code Européen des Voies de Navigation Interieur endorsement. More easily stated, this is an ICC with CEVNI, which is the driver’s license that I require to take Zonder Zorg through Belgium and into France. I was still waiting for its arrival in the post. 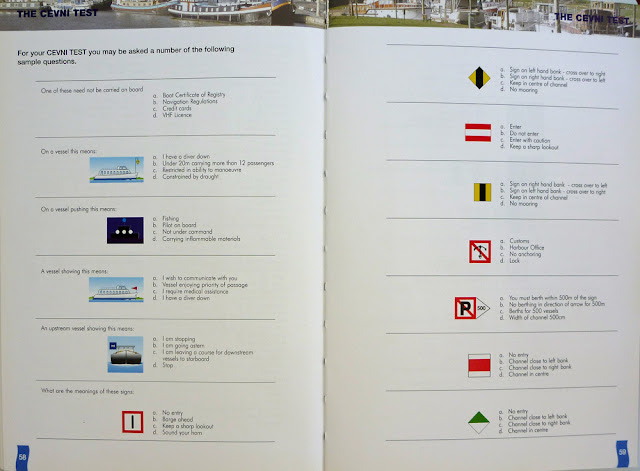 In early July I had received confirmation from the Royal Yachting Association that my 1972 Canadian Navy Upper Deck Watchkeeping Certificate and my 1975 Canada Department of Transport Certificate of Service as Master Foreign-Going Steamship were sufficient qualifications to waive having to pass courses and be examined for an ICC. While we were in Haarlem, I registered for an online CEVNI exam with Zeezeilschool Scheveningen in Den Haag and sent them the €45 fee. By the time we had reached Gouda, the school had received my payment, and the link to the exam had been activated. I sat in a cafe next to the cheese market and wrote both parts, with 100% scores on each.

I sent my application and for the ICC with a reference to the pass on the CEVNI exam to the RYA in England, asking them to send the licence to me in care of SRF in Harlingen. Since we were on the move with no planned itinerary, I thought this the easiest solution. Once we had a receiving address, I would have SRF forward the envelope to us. 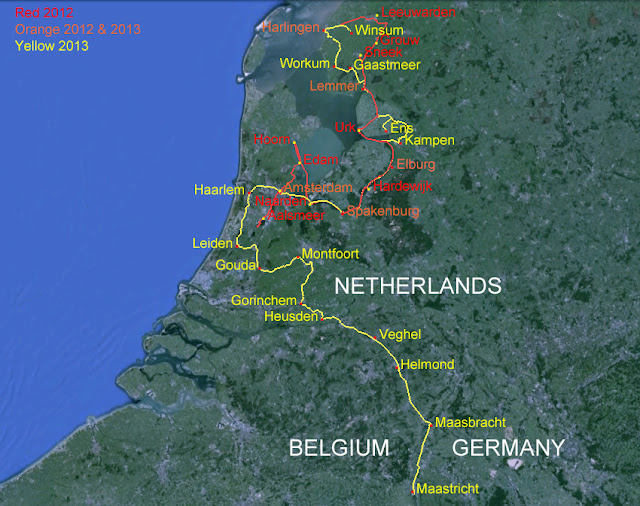 I had received confirmation from the RYA that the certificate had been issued and sent to Harlingen on 24 July, so immediately we arrived at Pietersplas in Maastricht on 01 August, I emailed SRF in Harlingen to have the envelope forwarded to us. Then we waited.

Finally after five emails to SRF over the following week and more, the envelope arrived on 10 August. In the envelope was my new membership card for the RYA, a copy of the latest member’s magazine and a huge sheaf of flyers, pamphlets and advertising sheets. I had applied for RYA membership, since it was at no cost, the ICC being free for members or £45 for non members. Membership was £45. I searched several times through the volume of papers in the envelope, but could not find the ICC.

It was mid-afternoon on Saturday and RYA offices were closed. I sent an email to my contact at the RYA offices telling her of the missing certificate and telling her we were moving on into Belgium and would send her a new address to which she could send the misplaced certificate, or a replacement. 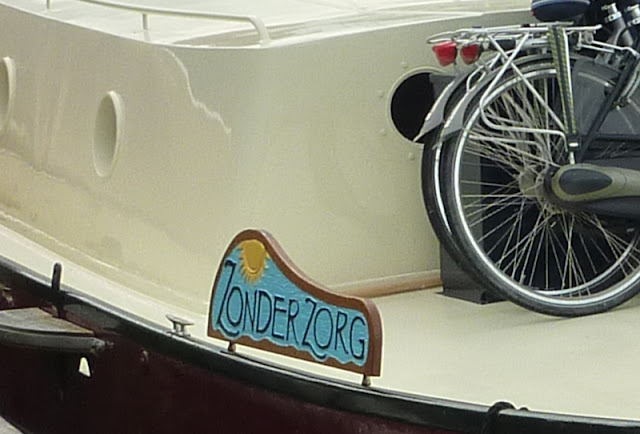 Except for the certificate, we were ready to pass through the Belgique control point, so we decided to see if we could bluff our way past the authorities. Last year we had spent six weeks without papers dodging and bluffing the authorities along the 3800 nautical miles of the Brazilian coast on our way back up from Cape Horn, so we figured that a Belgian checkpoint should be easy. We prepared to leave on Sunday morning.