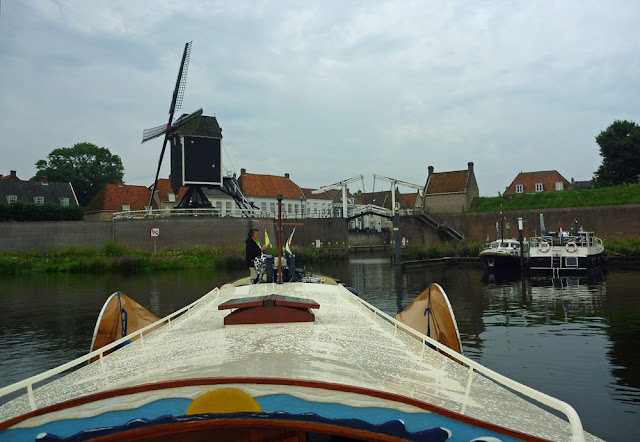 Shortly after noon on Friday the 26th of July we slipped from alongside in the jachthaven and motored the short distance across to the entrance to Huesden Stadshaven. 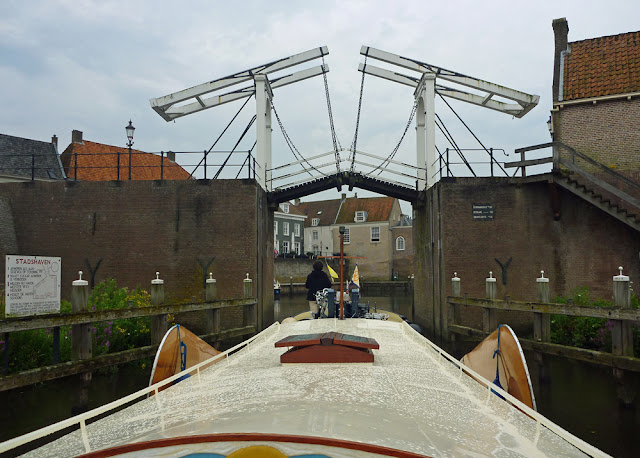 We squeezed through the narrow entrance and into the tiny inner basin. 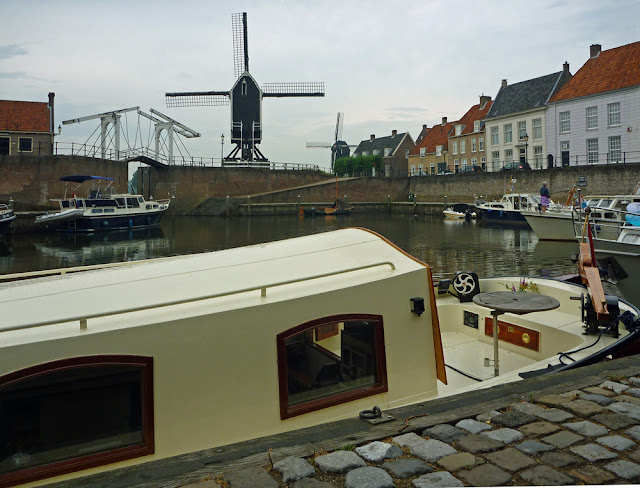 Inside we found a vacant length of wharf with a few metres of spare room and maneuvered alongside. 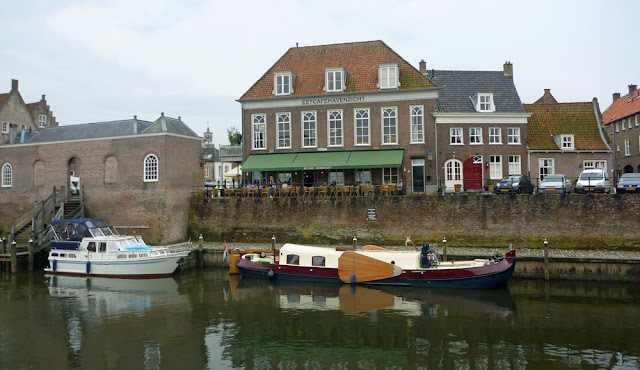 We stepped ashore and did a circuit of the small harbour, shooting photos of Zonder Zorg lying in this restored medieval harbour. 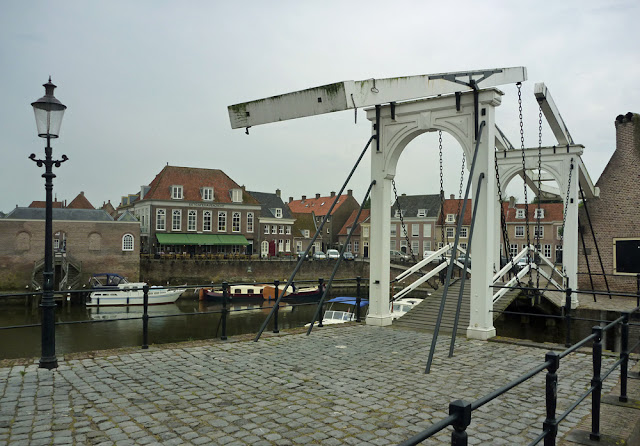 Had there been room in Stadshaven when we had arrived on Wednesday we would have stayed there instead of outside in the modern jachthaven. 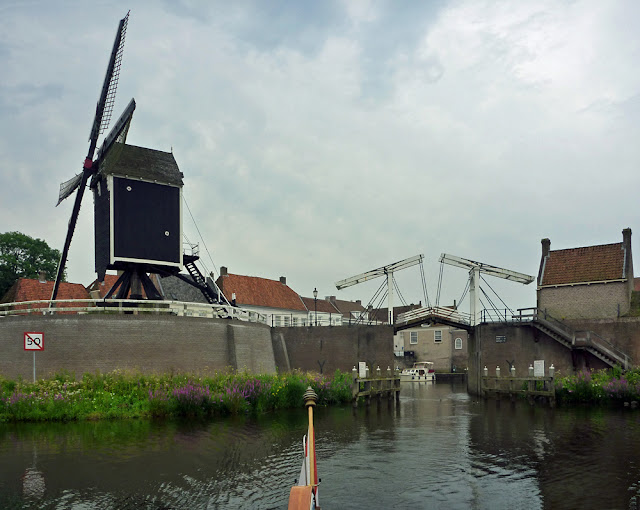 After we had satisfied our craving for a visit, we slipped our lines and turned in the very tight space to thread our way back through the old gate. 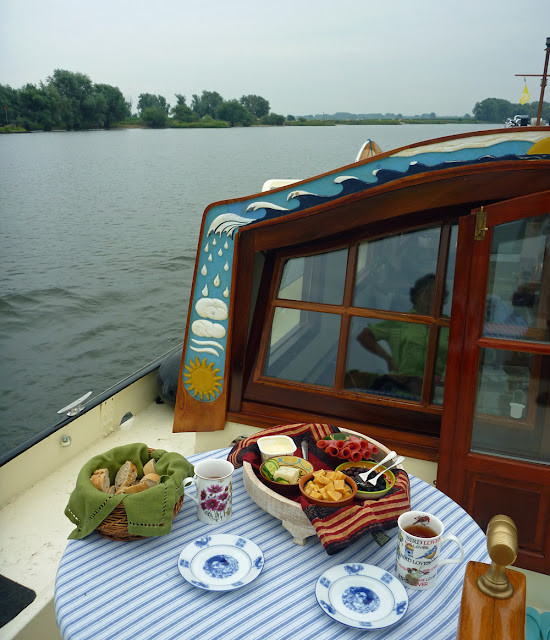 We continued along the Maas for about ten kilometres, and then turned southeasterly along Zuid-Willemsvaart. Edi brought up a wonderful tray of food to nibble at along the way. 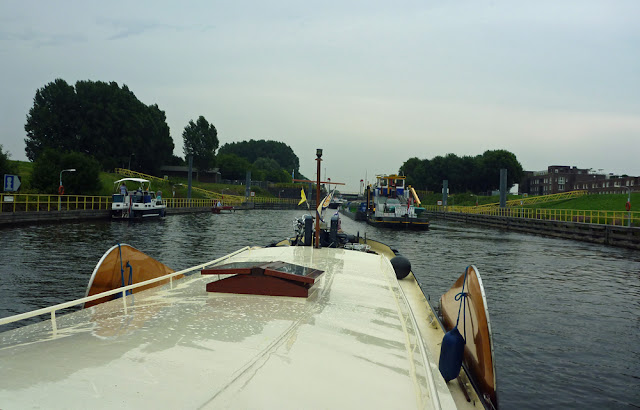 Shortly after leaving the river for the canal, we arrived at the first of thirteen locks that would take us cross-country while the Maas looped a much longer course to our north and east. Ahead of us at the lock were two large commercials, one of them a pair of dumb barges with a pusher that was together so long that in order to fit in the lock, it required decoupling the pusher. 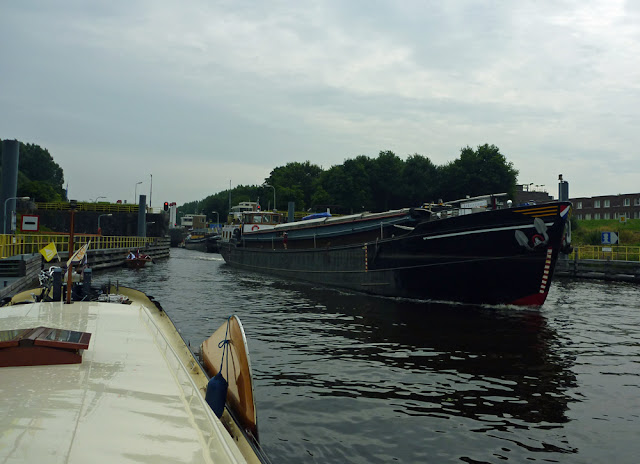 We waited for two lock cycles before we were shown a green. On each of these, the lock was full with down-bound commercials. 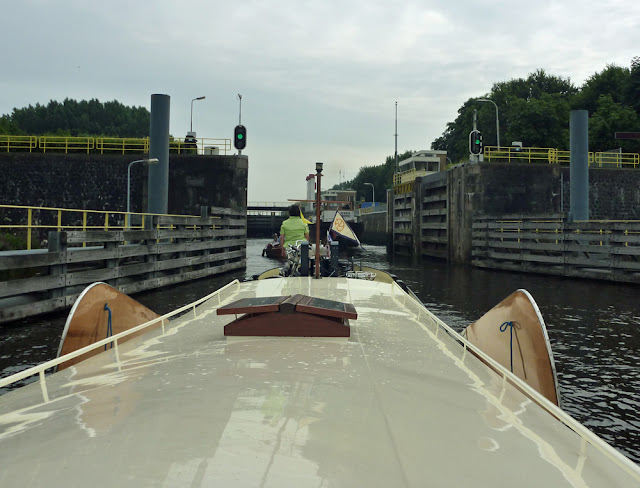 We followed a freshly arrived commercial into the lock and rode up. 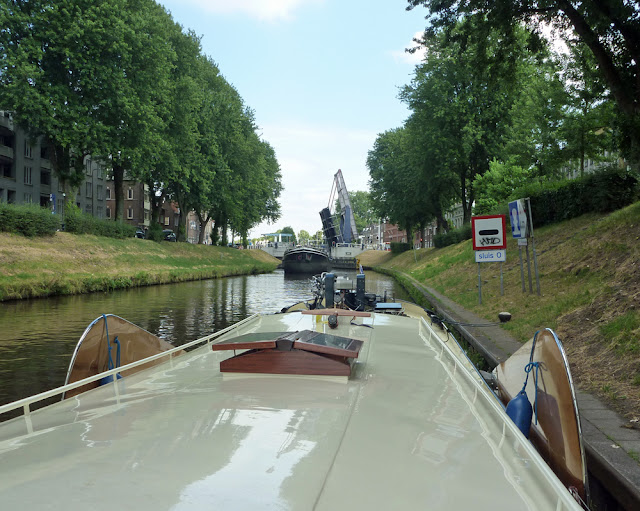 Further along, as we approached 's Hertogenbosch, we had to wait for down-bound commercials to make it through narrow lift bridge cuts. The delays at the locks and the bridges meant that our 20 kilometre trip to 's Hertogenbosch took over five hours, more than twice as long as anticipated, and all the mooring places were full when we arrived. In the Netherlands, it is prohibited to moor anywhere except where posted; whereas in France, it is permissible to moor everywhere except where prohibited. 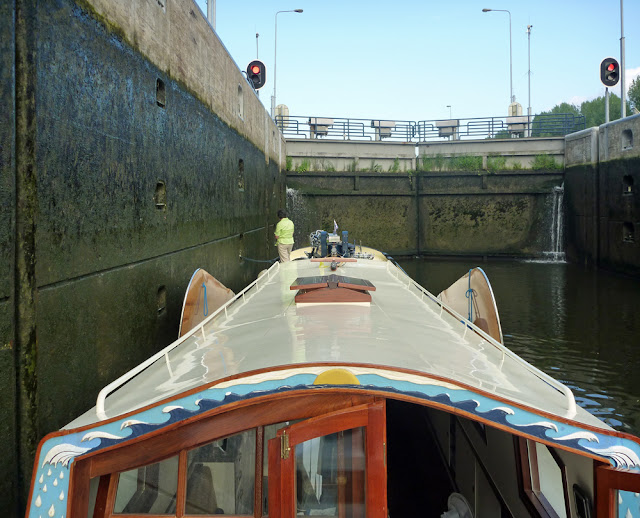 We decided to carry on to Veghel, eighteen kilometres and three locks further along. We were the only boat in the locks along the way. 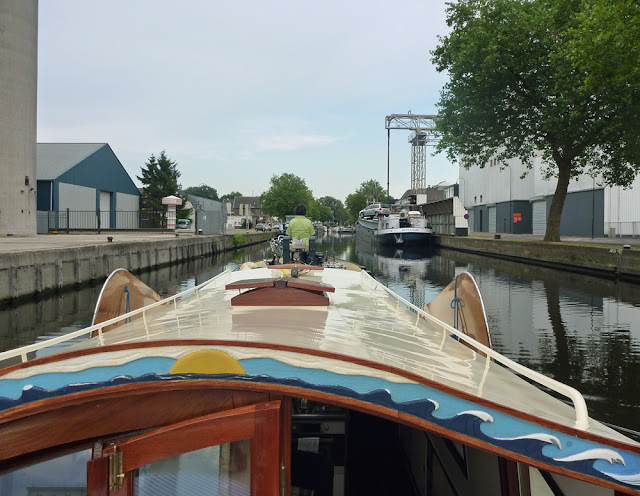 At 2014 we arrived at Jachthaven Veghel, at the end of a kilometre-long blind branch through a heavy industrial area lined with wharehouses and commercial barges. Edi's computer had crashed again, and she had booked the next available appointment with the Apple Genius in Amsterdam. It was for mid-afternoon on Sunday, so we decided to spend three days in the haven. 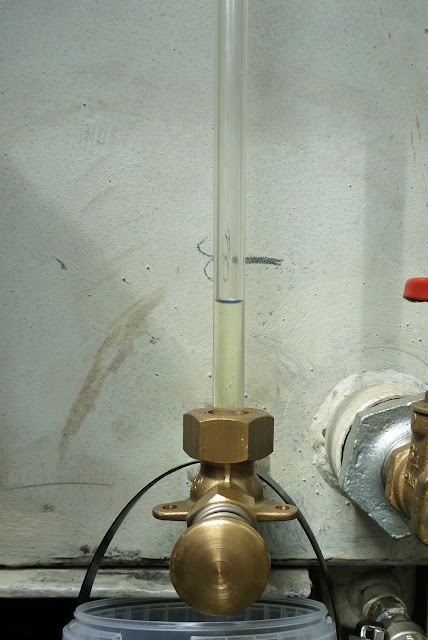 There is a very fine and rather compact shopping district centred about 300 metres from the haven and about half a kilometre from the boat is a large and well-stocked Albert Hein supermarket. We took advantage of these to refresh our supplies. Also, while Edi took the bus and train to Amsterdam, I lashed the two 20-litre diesel jerry cans to the trolley and walked a couple of loads from the Total station 400 metres down the street. The 80 litres cost €12 less than it would have at the last marine station we had seen. This exercise gave me the opportunity to start calibrating the gauge on the interconnected pair of tanks. The gauge was at what I interpolated to be about 42 litres, if the 50 litre chalked line on the tank were to be trusted.

I shot photos of the sight glass after each 20 litre slug and used Photoshop to crudely line-up the photos. I then measured the outside dimensions of the port side tank, the starboard one being buried behind the house battery and the inverter and impossible to put a tape to. Both tanks appear to be of similar, if not identical size, so I calculated the volume of the truncated and slightly wedge-shaped port tank and doubled the results. 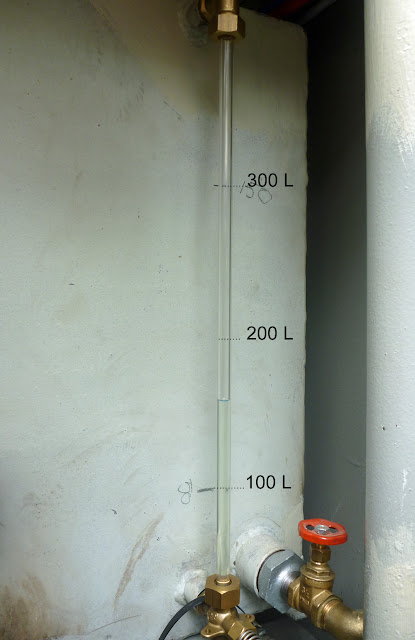 Chalked onto the port tank above the 50 mark is a 150 mark. Comparing my incremental gauge photos with the marks and the volume calculations, I assumed that the 50 and 150 marks on the port tank were added for that tank only, and that the quantity should be doubled for the pair of interconnected tanks. If the start level of about 42 on the 50 chalk mark is assumed to be doubled at about 84 liters, then the addition of 80 liters to the tanks should have taken the level to about 164 litres. This appears to be the case. A few more measurements will likely refine this and then some more permanent marks can be added to the gauge. 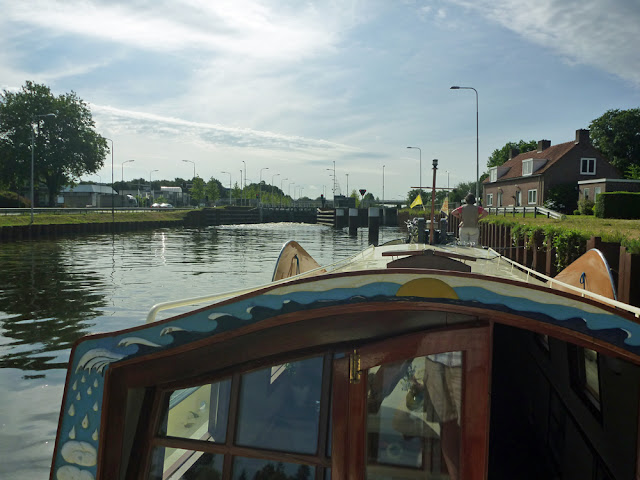 On Monday morning we headed back out the side branch and continued along Zuid-Willemsvaart, arriving almost immediately at the next lock. We could see the churn of water draining from the chamber as we arrived, and our wait on the mooring bollards was short. 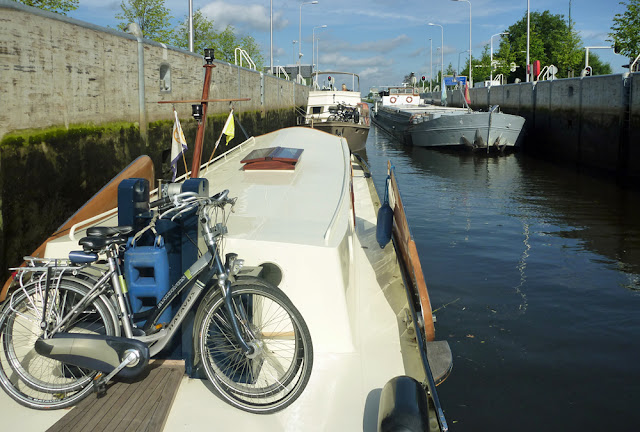 We were followed in by a rather erratically handled cruiser that bounced to a stop with several conflicting bursts of the engine and bow-thruster. After a short wait, we were joined by a 48 metre laden commercial. 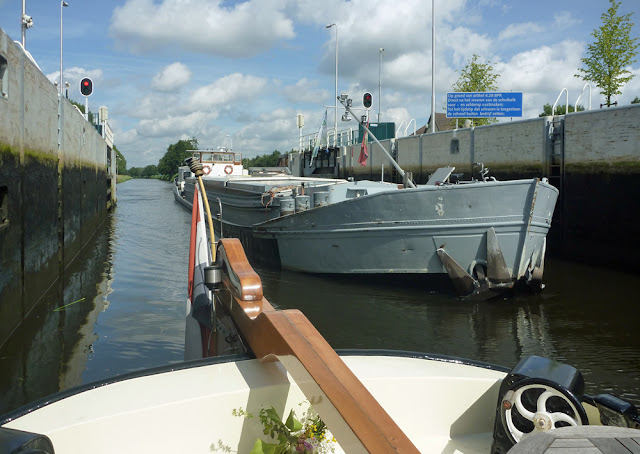 The commercial waved us and the cruiser to exit ahead, since in its laden state it was restricted to 9 kph on this stretch. The cruiser roared past us immediately we had left the lock and sped on up the canal. We continued along more slowly, keeping safely ahead of the commercial and knowing we would be locking through the next locks with it, so there was no sense going faster and wasting fuel. We arrived at the next lock to see the cruiser impatiently waiting for us. After it had bounced and jostled into place in the lock, I nestled in behind it and had the commercial come up our port side. 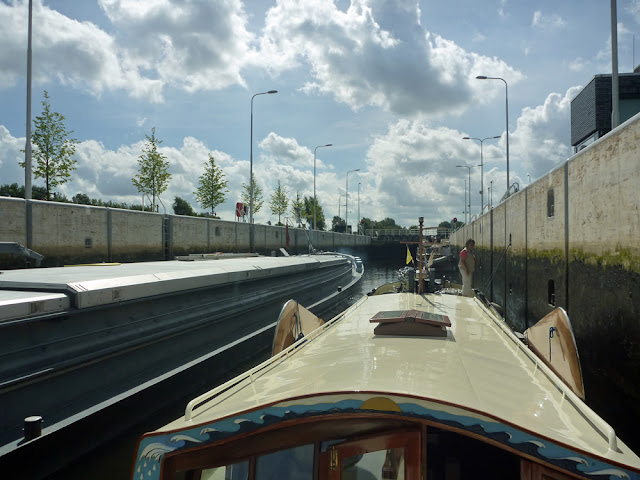 One more similar sequence brought us to the third lock of the day. Then fortunately, before the next lock, the erratic cruiser turned into the old dead-end canal to Helmond and left the commercial and us at peace on the canal. Beyond the Helmond lock we turned back up the other end of the old dead-end canal and took a peaceful canal-side mooring just short of the small lock into town. 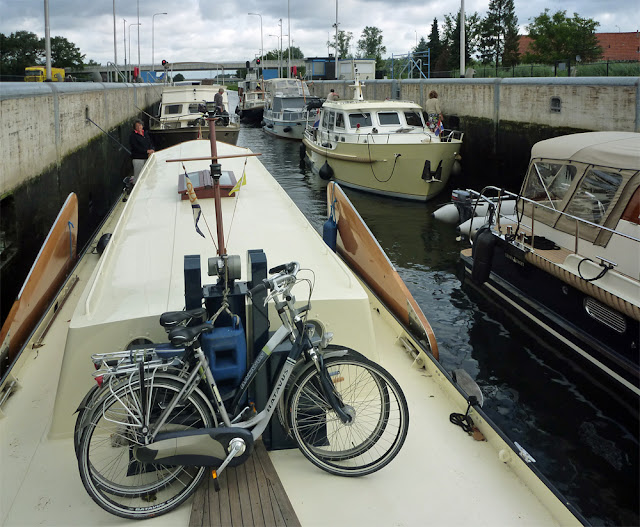 The following morning we slipped just after 0930, turned in the narrow canal and headed back out into  Zuid-Willemsvaart. As we entered the canal, we saw astern of us a parade of seven cruisers about a kilometre back, and we maintained speed to remain just ahead of them. At the next lock we entered first and took bollards on the starboard side at the top of the chamber. Two cruisers gently came to port side bollards beside us, then we heard a familiar roaring and thunking as the erratic cruiser bumbled in astern of us. 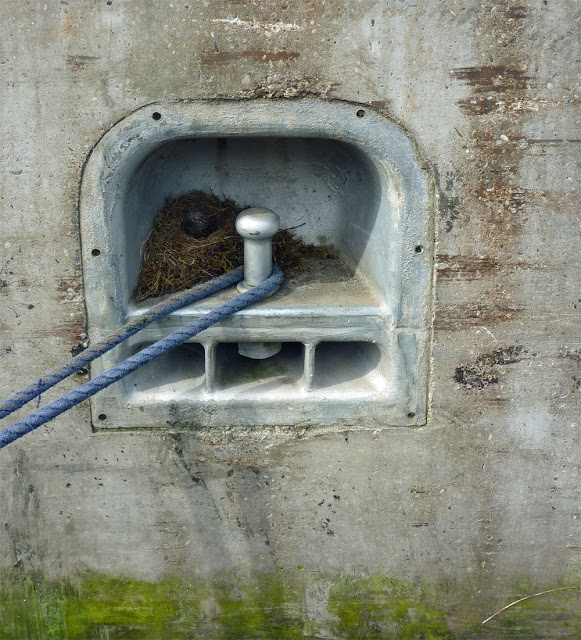 There were four of these up-bound locks and the routine was the same: We led the eight boat fleet out of the lock, along the pound and entered the next lock to watch the antics of the erratic cruiser. In these locks, the lift requires changing the mooring lines up successive bollards in the chamber walls as the boat rises. In one of the locks I had to share a bollard with a bird nest, which had been built in the pocket I needed to use just above high water line. The birds had flown the coop, but I thought it would have been an interesting conflict of interest during incubation and rearing new hatchlings. 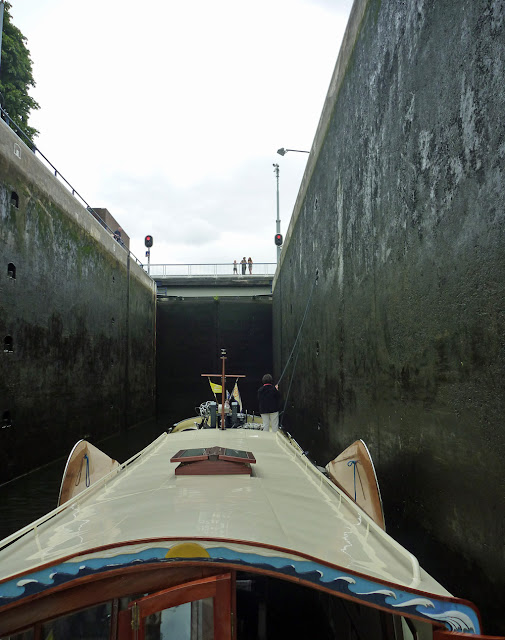 About five kilometres after the last of the up locks we came to a junction. Zuid-Willemsvaart turned right toward Belgium, about twelve kilometres away. We continued straight on Kanaal Wessen-Nederweert for another fifteen kilometres until we came to the Panheelsluis, which took us down about ten metres to the level of the Maas. 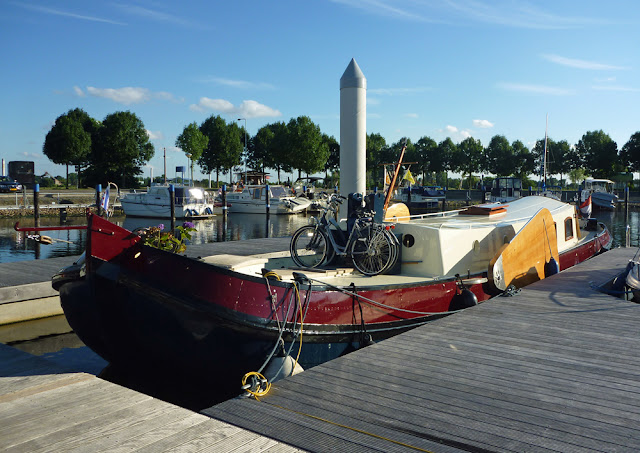 At 1514 we secured alongside in Jachthaven Eurosports Wessem. It was cold and blustery and began raining as we arrived. We ducked inside and enjoyed our comforts through an increasing storm. Wednesday morning the front had passed and the day grew clear and warm. 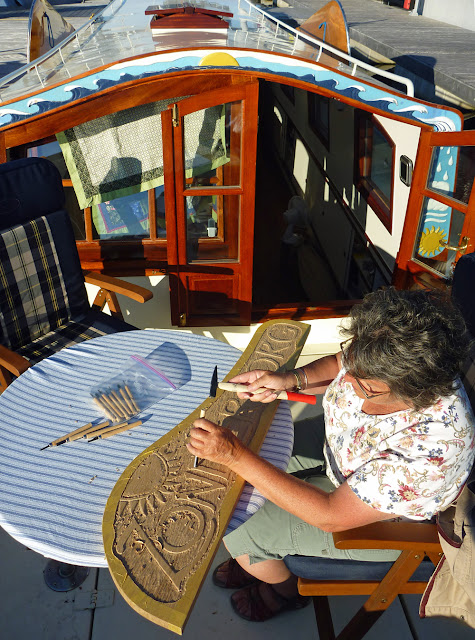 Mid morning we offloaded our bicycles and went exploring and grocery shopping. Back onboard Edi continued chiseling away on the Zonder Zorg name boards she is making to replace the old Nieuwe Zorg ones. We are getting close to the Belgique border, where boat and papers and certificates will be checked. We need to have everything in order by then. 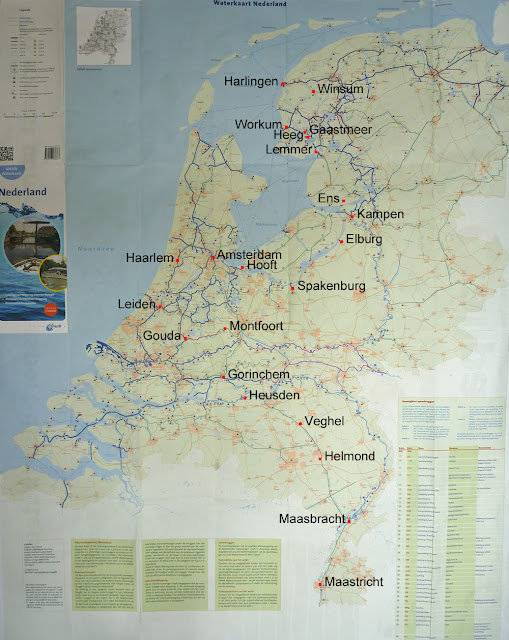 Our plans are to head up the Maas to Maastricht on Thursday and spend a few days there relaxing and getting everything in order for continuing into Belgium.
Posted by Zonder Zorg at 00:07