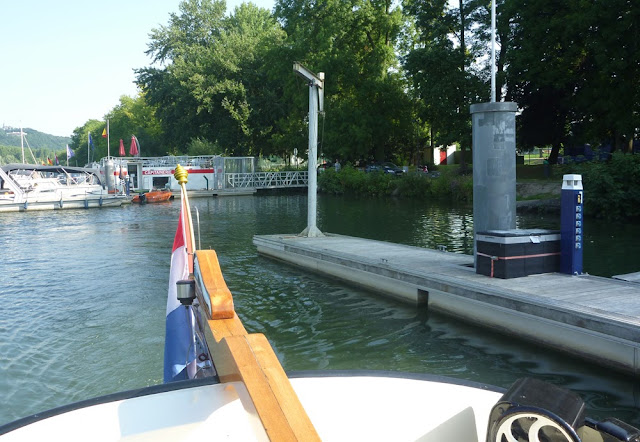 We had returned to Namur, Belgium on Tuesday 22 August from a five-day trip back to Canada to visit family and scatter some ashes. Belgium held no attraction for us, so early on Wednesday morning we slipped our lines and continued up the Meuse toward France. 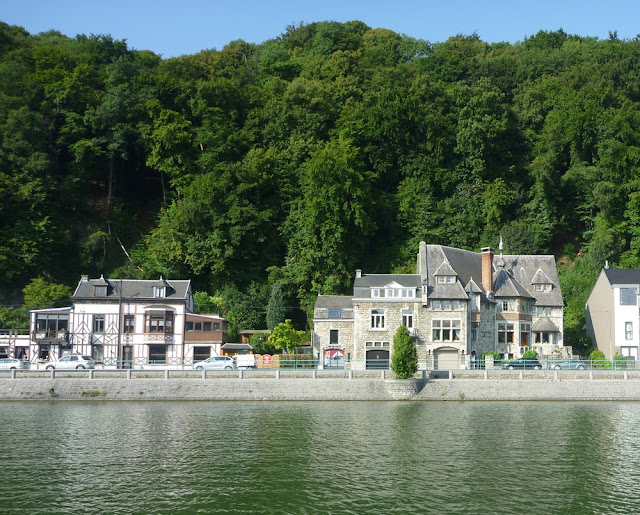 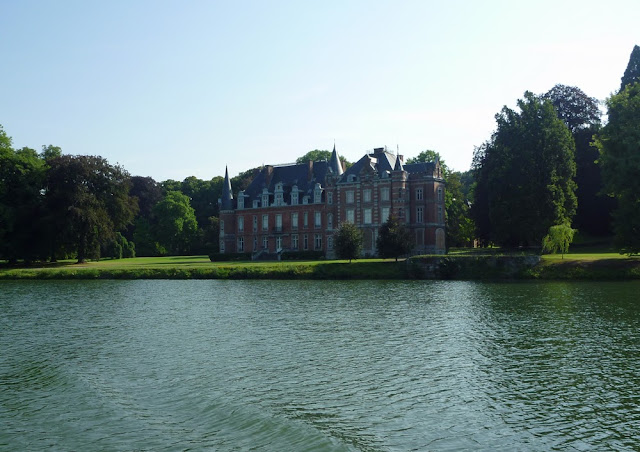 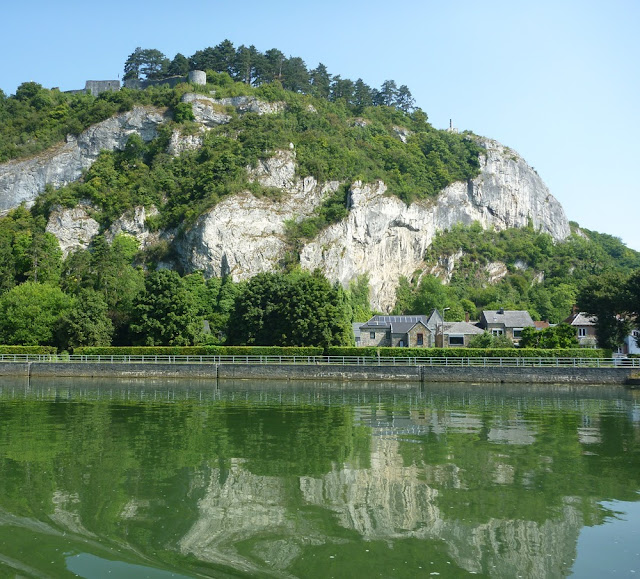 The scenery continued very pleasant with many fine buildings, some grouped in small villages and many standing as solitary riverside estates. Along the way we passed several impressive chateaux and some fortified hilltops. 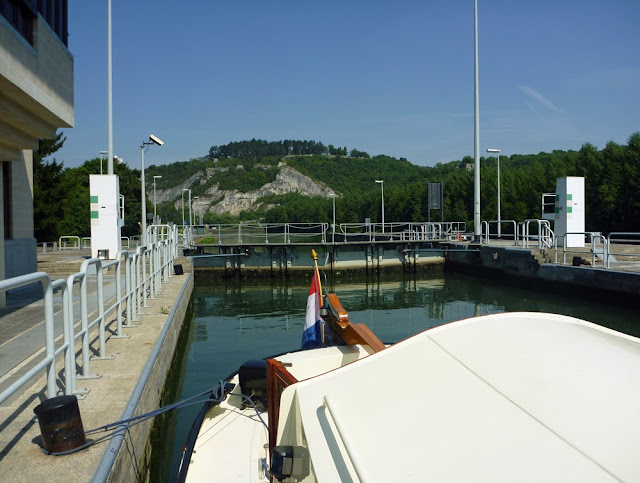 There are nine locks between Namur and the French border, their chambers taking barges up to 98 metres long and 11.8 metres wide. The lifts vary from 1.7 to 2.89 metres, all but two of them being over 2 metres. The bollards along the tops of the chambers are broadly spaced for the large commercial barges, with no intermediate securing points for smaller craft. Some overly zealous safety bureaucrat had caused protective fencing to be recently installed, making it impossible to toss lines over the bollards from our barge. Edi had to climb the slimy ladder up the chamber wall dragging the bow line with her, while I stabilised the barge in the chamber. After she had looped the bollard and passed me the end of the line to secure the bow, we moved aft and I tossed her the stern line to repeat the process. This system worked satisfactorily; we had plenty of time to stabilise in the chamber before the operator began closing the downstream doors and then gradually opening the sluices to flood the lock. However; it was beginning to wear on Edi, who was nursing cracked ribs from being overeagerly hugged by my nephew as we were saying our farewells in New Brunswick. 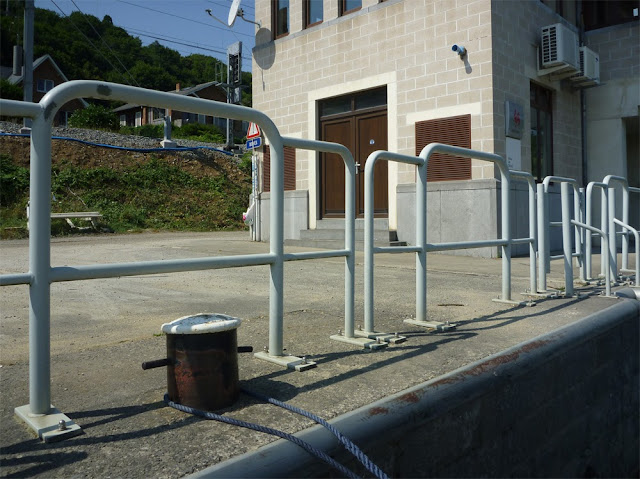 As we were midway through the gates of Ecluse du Dinant, they began closing. We rushed to secure. There was no reachable bollard for our stern, so we did a long bow line and used it as a spring, motoring forward onto it as the lock keeper opened the upstream sluices all at once and sat back in lock-side chairs with a buddy drinking beer and watching the antics of les maudits plaisanciers hollandais, the damned Dutch pleasure boaters. Fortunately, there were only three more Belgian locks before France. 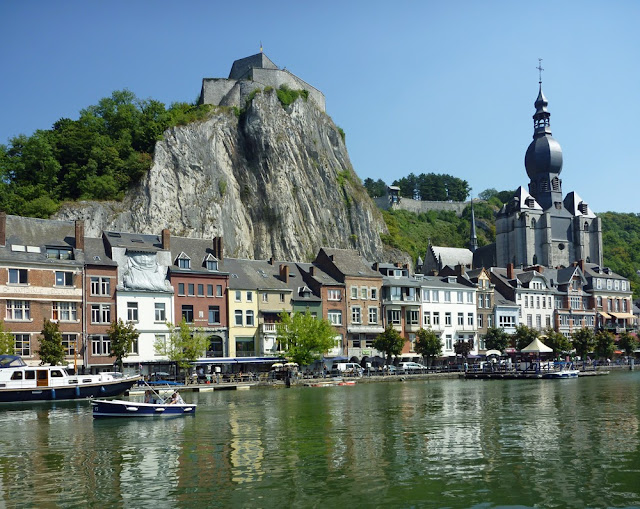 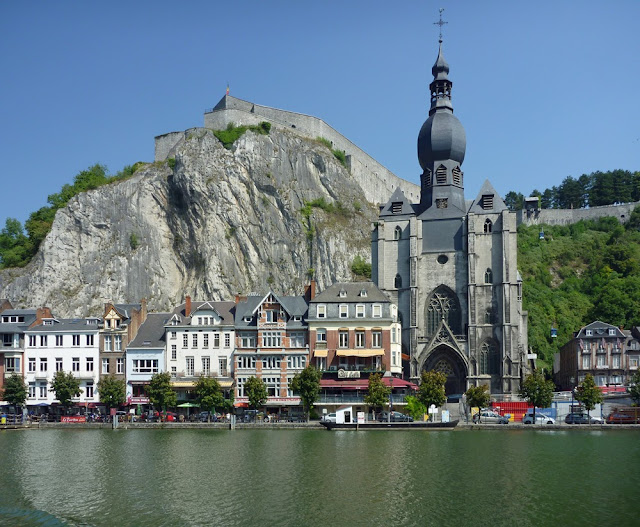 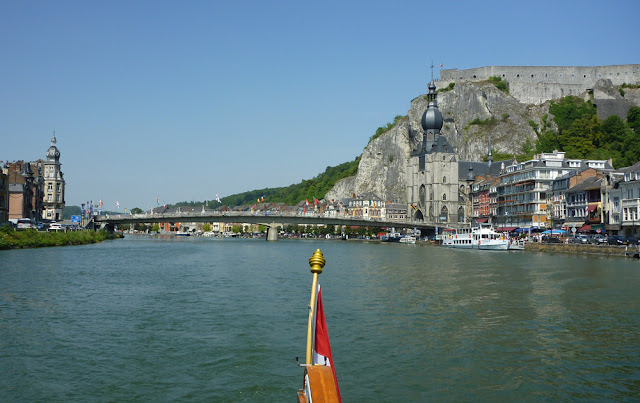 We survived the abuse and motored into Dinant, which looks like a wonderful place to stop; however, we were by that time so turned-off by Belgium, that we continued on through. 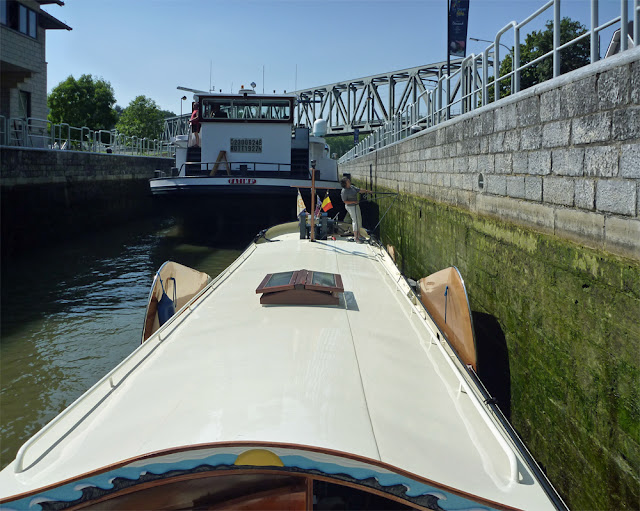 At the next lock, we waited for a large commercial barge to enter the chamber, and then on his invitation, joined him for the ride up. We nestled-in astern of Fatima of Rotterdam with about two metres to spare. He welcomed us into the next two locks and while we were rising in the final one before France, he craned his car ashore and walked over to tell us he was stopping just after the lock. 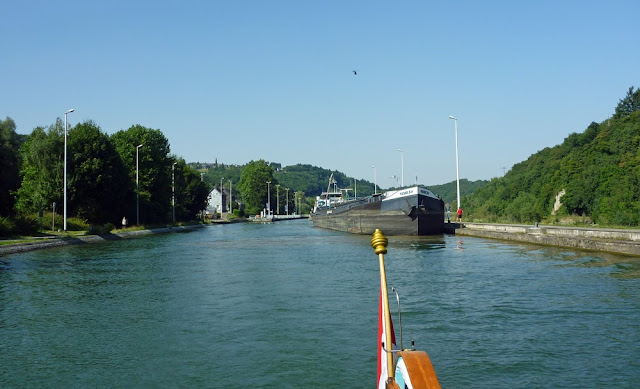 It was a relief to have this Dutch boating courtesy amid the rudeness and ignorance of the Belgique. After the lock we waved our thanks and continued on toward the border. 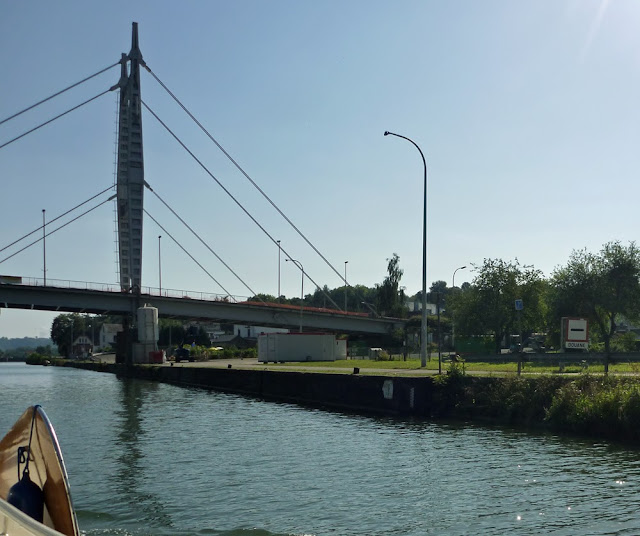 We were still looking for the Belgique declaration station, when we passed a Douane sign. 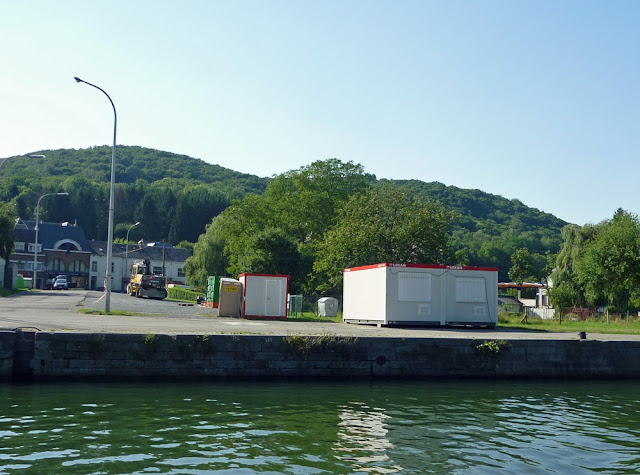 Just beyond it we saw a temporary building near the canal bank that could have been the reporting post, but its shutters were closed and it was very obviously not in use. 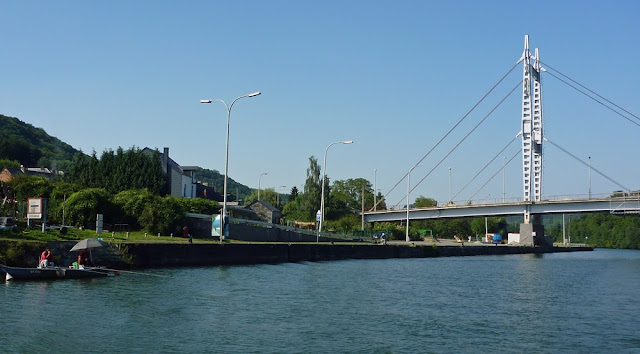 Looking back from across the border, we could see no signs indicating boaters should stop. We suspect that the Belgians had decided to shutdown the reporting post, their attitude and their pleasure boating infrastructure having scared away most of the pleasure boaters. It no longer mattered; we had left Belgium and were in France.

We shortly arrived at the next lock, the first one in France. L’eclusier took our lines with a hook on a long pole and placed them over the bollards for us. When we were secured he activated the lock and when we had reached the top, he motioned to me to come into the office. I took our thick portfolio of licenses, certificates, documents and other boat related papers. He didn’t want to see any of it, he wanted only my name and the name of the barge to write in his log. He gave me a remote-control clicker to activate the automatic locks in the Departement d’Ardennes, saying we would give it back at the final Ardennes lock. 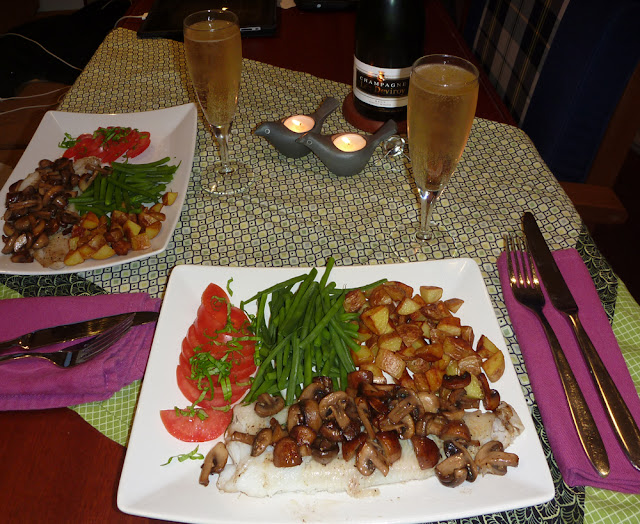 We continued on to Givet, where at 1753 we stopped for the day. To celebrate our arrival in France I sautéed some filet de fletan and enjoyed it with mushrooms, fine green beans, pan-fried potatoes and sliced tomatoes with shredded basil. 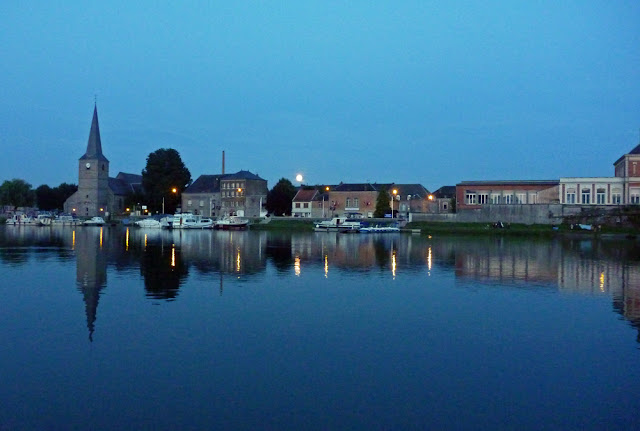 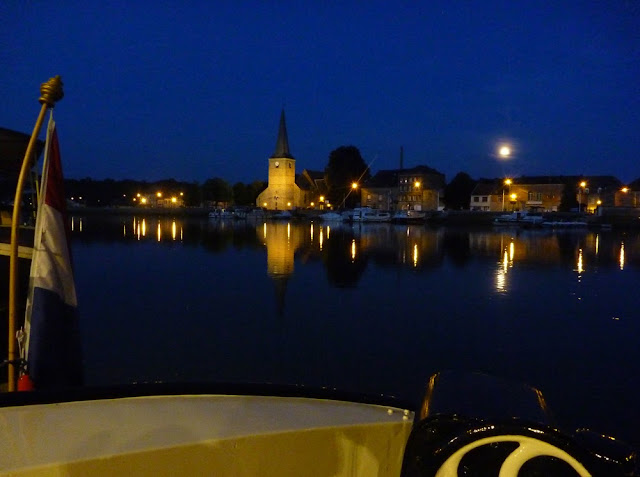 We anticipate that the accompanying bottle of Champagne and the full moon are the first of many we will enjoy in France.