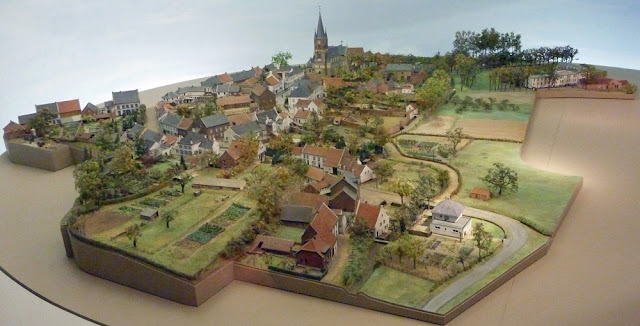 Our museum passes had given us free access to Abdijkerk in Thorn, and we emerged after more than an hour totally entranced. We walked along Wijngaard to the Gemeentemuseum Het Land Van Thorn, the community museum. Again, our museum passes gave us access. Among the displays, the most fascinating for us was the very large and wonderfully detailed scale model of the village of Thorn as it was when the seven-year modeling project was completed in 1985.

From the museum we pedalled along to the Spar supermarket, where we picked-up a few items to replenish our fridge, breadbox, wine cellar and pantry. After two months aboard on the European canals, we have finally become accustomed to not having to stock-up for weeks or months at a time as we had done for three years on our sailing adventure around South America. 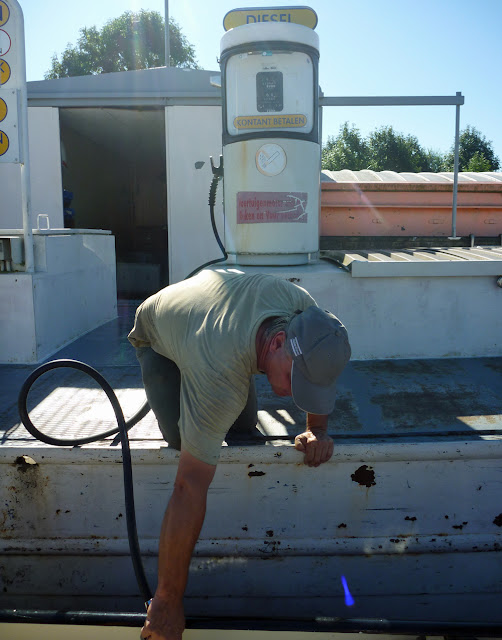 Back onboard Zonder Zorg we relaxed for the remainder of the day, and then at 0930 on Thursday the 1st of August we slipped and motored along the kilometre or so to the bunker barge to take-on some diesel. 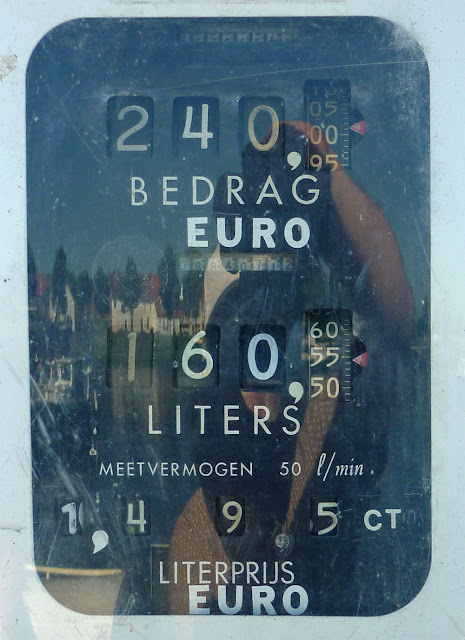 I had been discussing the price of diesel fuel on the DBA Forum for the past few days, and the consensus was that the bunker barge at Wessen had one of the best prices in the Netherlands. It was at €1.495 when we stopped, which is only €0.04 more than the road station from which I had hauled jugs in Veghel. 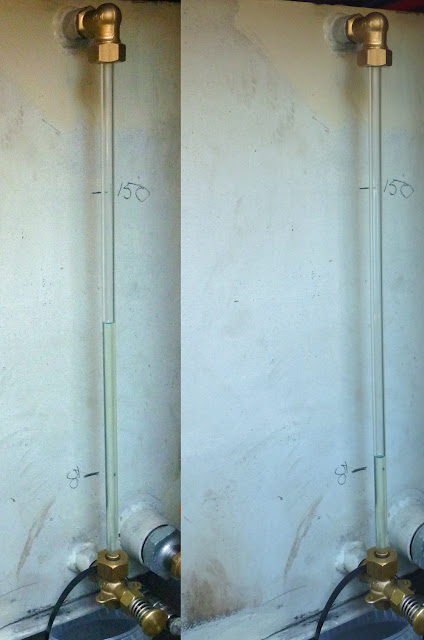 We took on 160.55 litres, and to continue calibrating the gauge, I took photos before and after adding fuel. The level at the beginning was about a tenth of the way between the two chalked marks: 50 and 150. After adding 160.55 litres, it was showing about six tenths of the way to the 150 mark. I now have some more clues on the calibration of the gauge, and will need to do some calculations to fine-tune it. 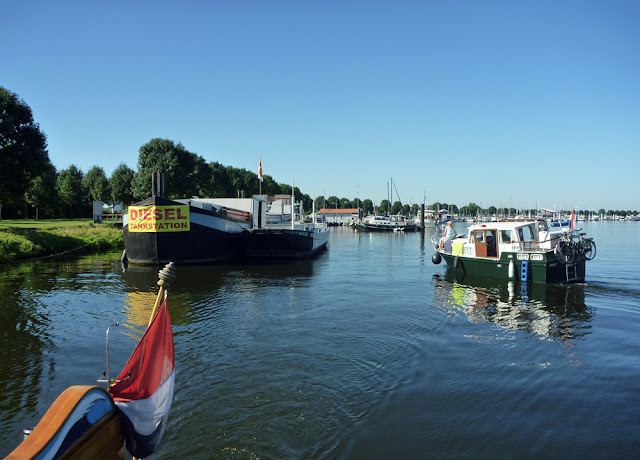 As we were fueling, a line-up of waiting boats began to build, and as soon as we slipped, the mooring spot at the pump was quickly filled. 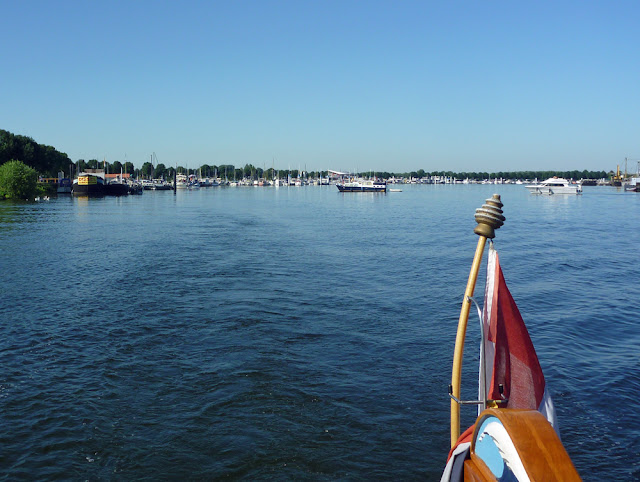 As we headed up the arm to its junction with the Maas, we watched as more boats joined the waiting line. This is the only marine fueling facility we have seen in the Netherlands with a line-up. Its price is 10 to 15 cents cheaper than the others we have seen thus far, and it is good to see that the business is being rewarded. I would wager that its low markup, high volume formula easily makes it a more successful business than the high markup places we had seen with few or no customers. 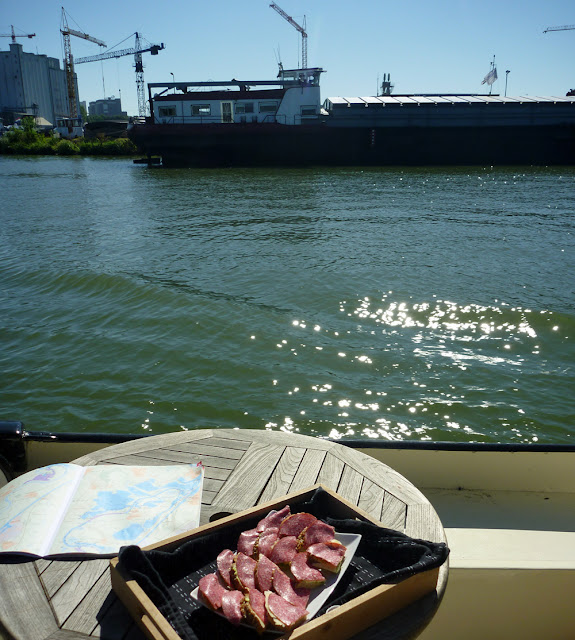 As we made our way back out into the Maas and along it, Edi brought up a platter of open-face sandwiches, which we enjoyed as we passed through rather bland industrial areas. 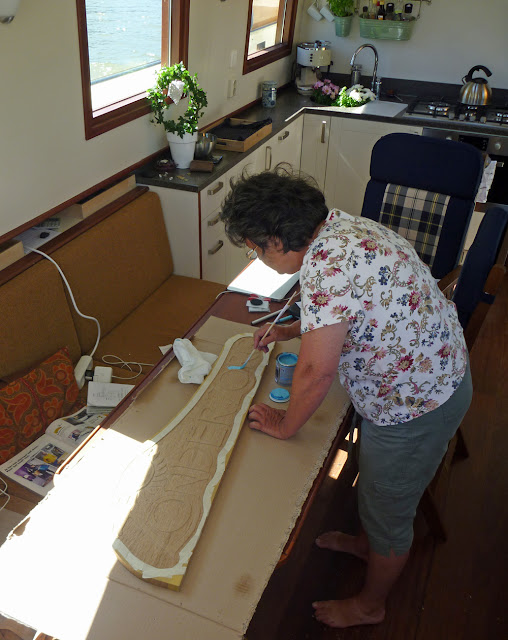 With little scenery of interest, Edi went below and began painting the Zonder Zorg name board that she had finished carving. 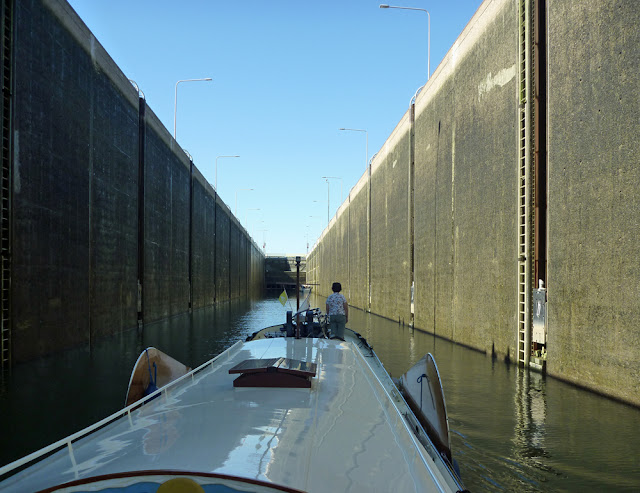 Shortly we came to the first lock of the day. This was one of the two smaller ones in a triple set, but it was still huge to us. We were pleased to see as we entered, that there are floating bollards in the walls. 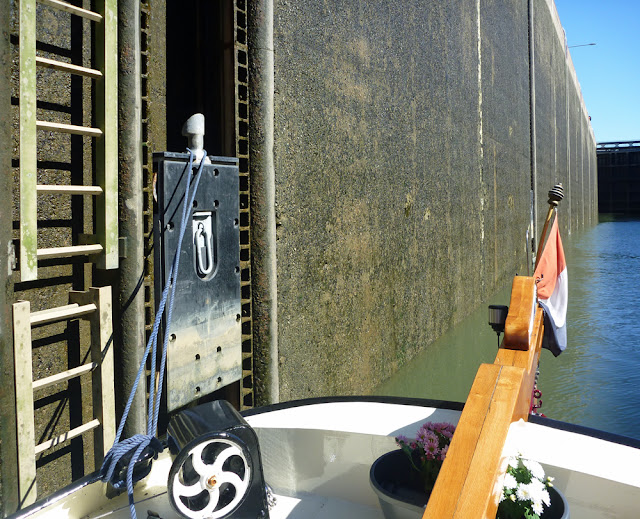 With the floating bollards, we simply secured Zonder Zorg between a pair of them and monitored the system to ensure that it didn't stick or jam. As the water rose, the bollard floated up, maintaining the barge nicely alongside the wall. 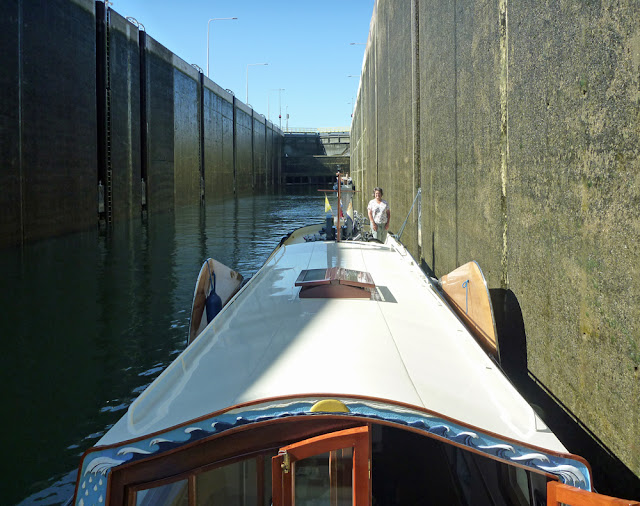 This was much simpler than the last several locks we had been through, where we had to keep moving the lines up the walls to successively higher bollards. 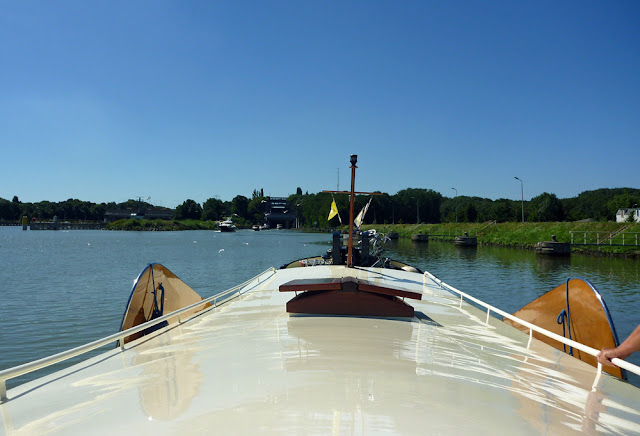 A dozen or so kilometres further along we came to the second lock, another set of three side-by-side chambers. The lights were red for all three of them, so we paused to see which one would cycle for us. Shortly, the Oude Sluis gate opened and a parade of boats came out, and when they had cleared the chamber, we were given a green light. 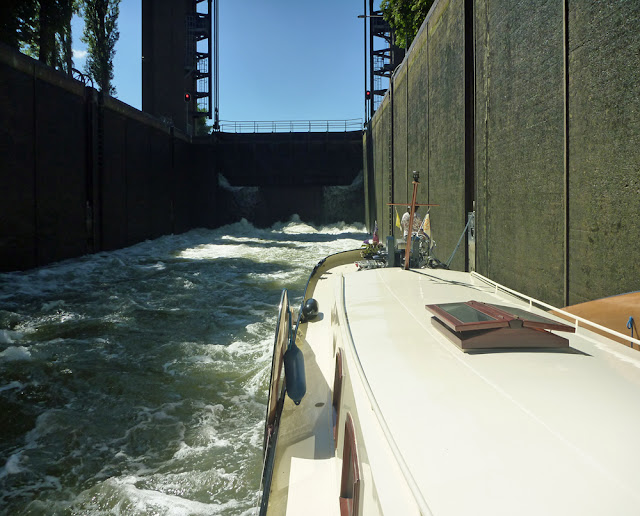 There is a caution sign at the entrance to the chamber mentioning turbulence toward the head of the lock. We secured to a pair of floating bollards about two-thirds of the way along the chamber, leaving room behind us for later arrivals. When the chamber began flooding, we experienced the largest and most violent churning I have ever seen in my many hundreds of locks during eight years of European canal boating. The floating bollards, and Zonder Zorg's shallow draft and flat bottom allowed us to comfortably ride the roiling water. 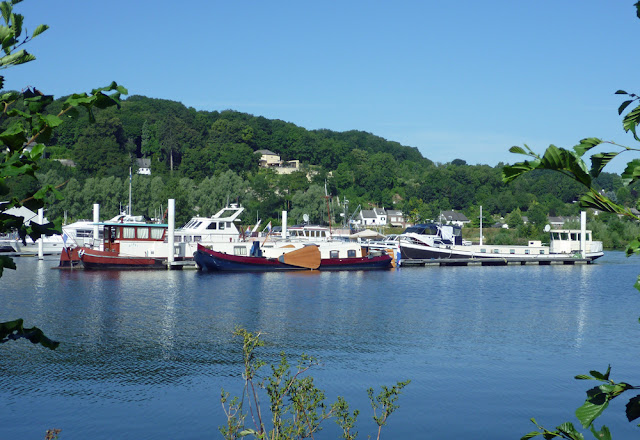 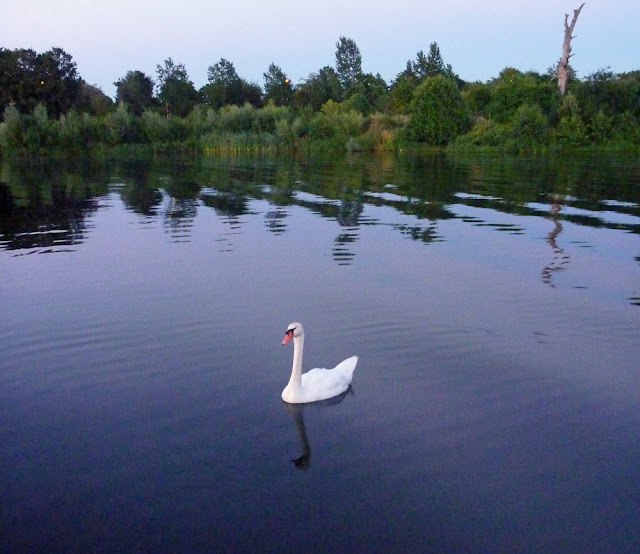 We enjoyed a wonderfully relaxing evening, with dinner in the cockpit and itinerant swans dropping by looking for orts. 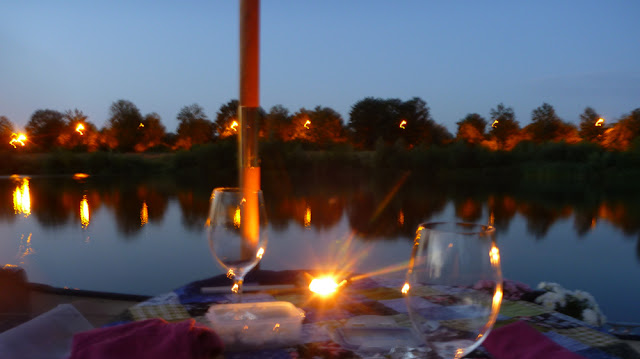 Our after-dinner Cognac rendered the late twilight a tad blurry, even for the camera.