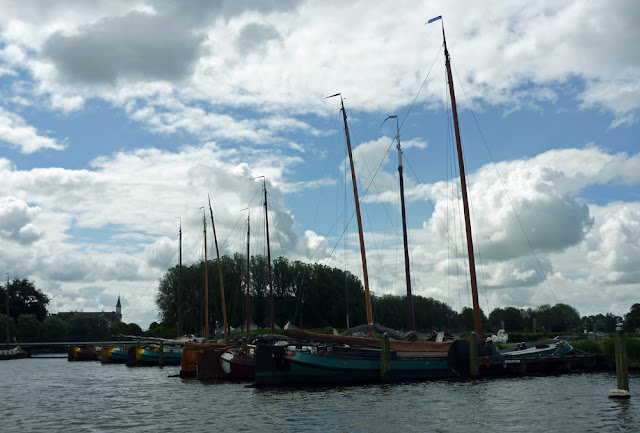 At 1050 on Tuesday the 25th of June we slipped from the wharf in Heeg and headed out into Heegermeer, across it and into Wâldsinster Rakken to Woudsend. As we arrived in Woudsend, we passed a dozen racing skûtsjes moored on piers alongside the canal. It is wonderful to see so many century-old vessels in such fine condition, and to know that each is raced hard in the many Friesland sailing competitions. 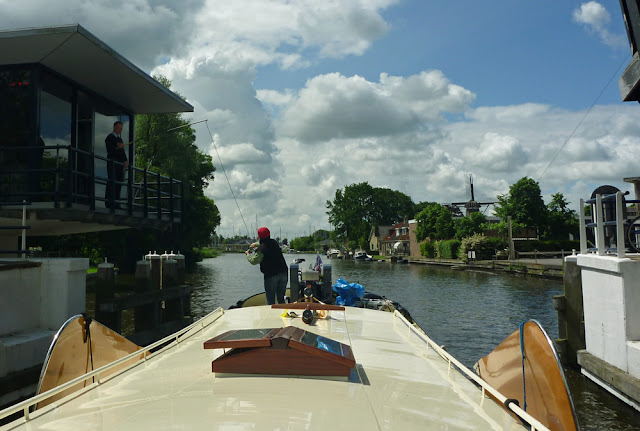 As we continued through the town, we passed the line-up of boats waiting for the bridge to open, and easily ducked under the 2.45 metre span. We crossed Slottermeer in a strong crosswind and entered Slotergat. A short distance along, in the centre of the town of Sloten, we came to the Nieuwe Langenbrug, which at 1.11 metres was too low for us. The keeper had opened the bridge for us as we approached, and as we passed through, he swung a wooden shoe out for Edi to drop in the €2 bruggeld. 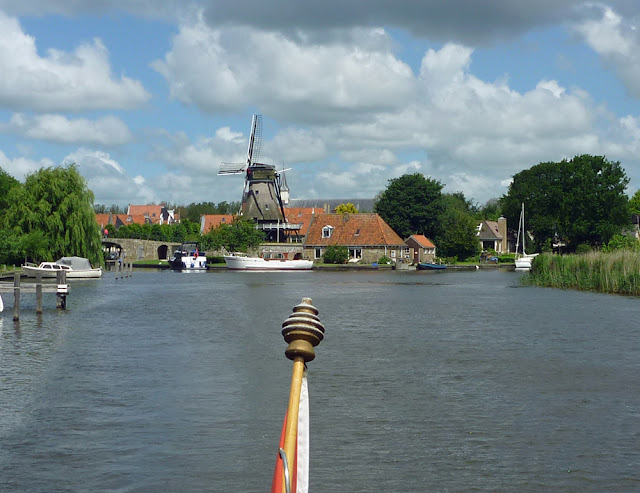 The scene behind us as we left Sloten was definitely the Netherlands. There was a windmill, many red tiled roofs, a stone bridge, two canals and a variety of boats old and new. South of town we turned eastward into Wâldsleat, crossed Brandermar and then followed Hjerringsleat and Reinsleat to Grutte Brekken, which we followed southward.

From its southern end we turned into Stroomkanaal and then followed Zijlroede into downtown Lemmer. Here there are three bridges that require lifting. At the first one Edi put the posted €5 bruggeld into the clog-on-a-line and we confirmed that this fee was for all three bridges plus for the lock at the far end of town that will take us up to the level of the IJsselmeer. 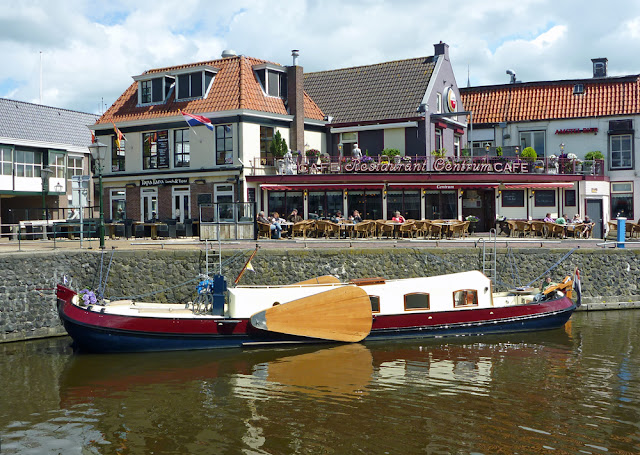 As we entered the centre of town, we saw the canal banks lined with visiting boats. It was still early in the afternoon and the havenmeester obviously hadn’t yet been around to condense them; they were loosely spaced with many 10 and 12 metre gaps. However; since we need 18 or more metres for Zonder Zorg to squeeze-in, we continued through the third bridge. We were hoping to find a place on the wall in the basin before the lock, where we had stayed on our arrival in Friesland in September. 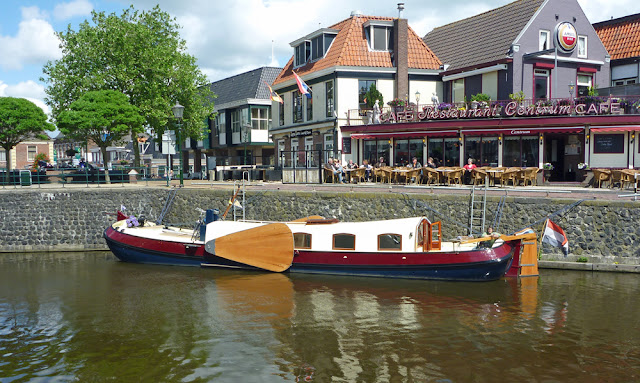 We were fortunate in finding a space of more than 20 metres just down stream of the bridge. At 1358 we secured against a 3-metre high stone wall with a stout wooden rubbing strake along its bottom and solid bollards along its top. We were in the heart of the city; the bridge is main cross street of downtown Lemmer. We decided to pause for a couple of days.
Posted by Zonder Zorg at 04:08