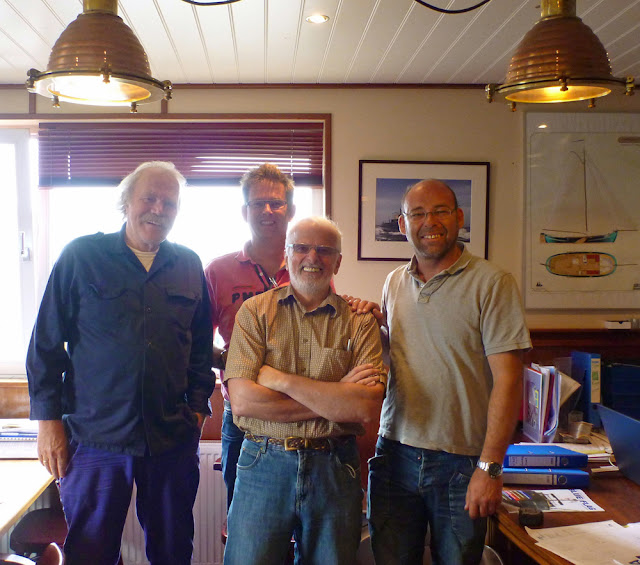 On Wednesday morning, the 19th of June, with our seven-month refit in Harlingen complete, we went up to the office of Scheepsbouw & Reparatie Friesland to bid our farewells. We had the rare good luck of finding the three partners, Lex Tichelaar, Wychard Raadsveld and Klaas Koolhof in the office at the same time. After we had thanked them for the wonderful work they had orchestrated, I posed for a photo with them. I am not a short person, but with the Dutch having the tallest average height in the world, these three men at 195 to 200 centimetres tall towered over me. Their work seems to tower over that of other yards in our experience. 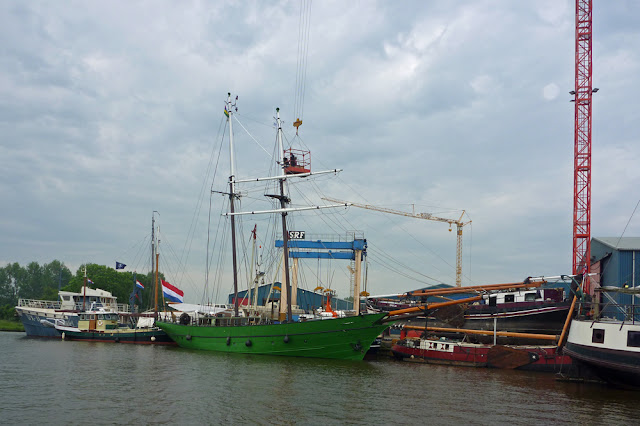 We flashed-up Zonder Zorg’s new engine, and at 1015 we slipped our lines and headed out. As we motored past the yard, Andre shouted a “Bon Voyage” from his perch on the foremast of his new topsail schooner. We had watched the previous week as the masts were stepped, and now we saw the yards being rigged. There is still considerable interior work to be completed, but she is looking very shippy. 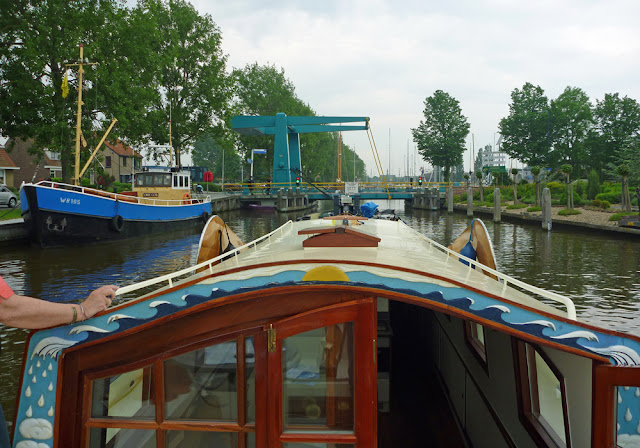 Within ten minutes we were at the Industriebrug waiting for the bridge to be opened for us. We had decided to take the narrow Harlinger Trekvaart, which winds through farmland and small villages to Bolsward. Along the way are several low fixed bridges, the lowest being 2.16 metres and the narrowest 4.5 metres, but before we can get to them, we have five movable bridges that need to be lifted for us. We phoned the number on the bridge sign and were informed it would be about ten minutes; they were just finishing at the other end of the series. 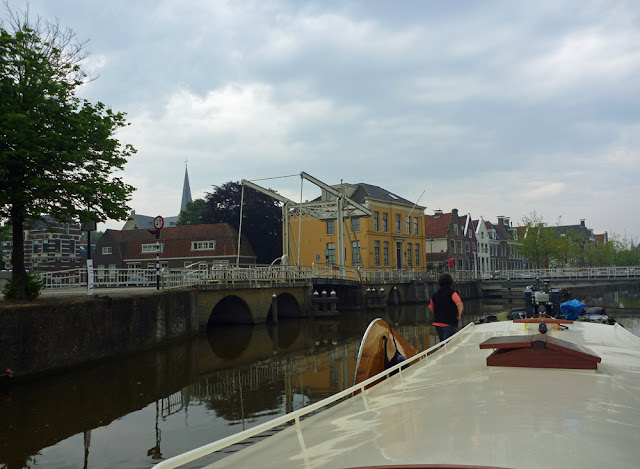 The second bridge was 6.9 metres wide, but required a 90º turn to port from the narrow canal, so it was a good test of my barge-handling skills. I surprised myself with the ease of the manoeuvre, and am delighted that I had fitted the left-hand propeller. 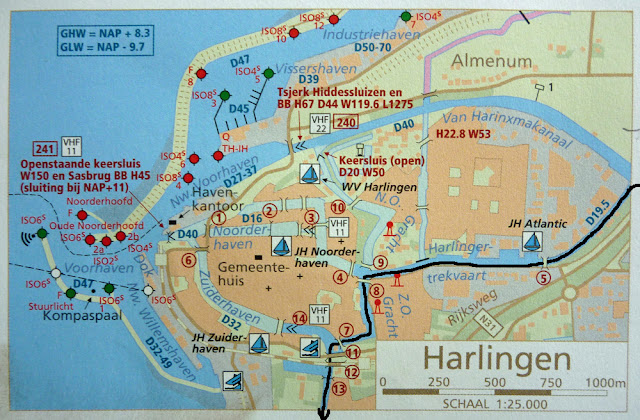 The third bridge, number 7 on the inset from the chart, is a 5.5 metre wide swing bridge with an immediate 80º port turn into the 6.6 metre wide road bridge and the adjacent 6.4 metre wide rail bridge. It was all wonderful barge handling practice. 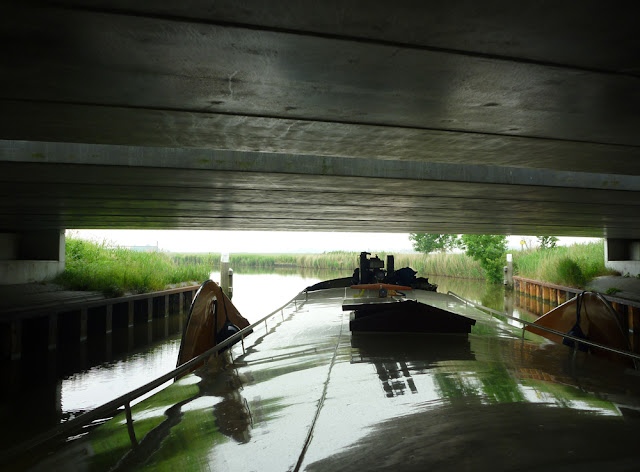 At 1059 we were through the rail bridge and then very quickly into rural Friesland, with no more movable bridges until the city of Bolsward. There were; however, many fixed bridges, mostly with 2.5 metres of clearance above water. We have not yet accurately measured our air draft since the refit, but preliminary rough measurements that I took show us to be about 2.05 metres. We slid under the lowest of the bridges with room to spare. 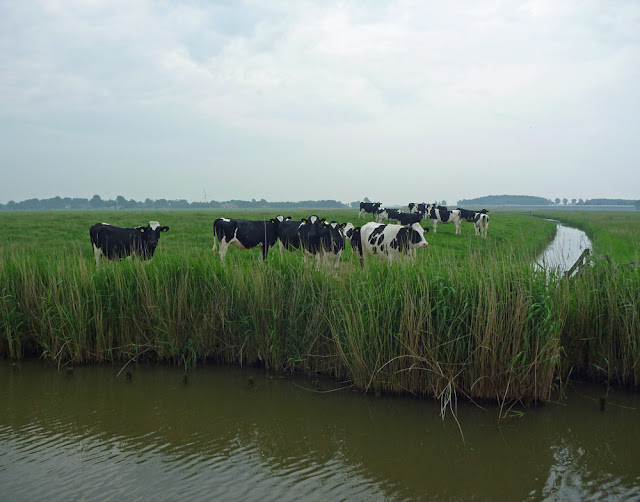 Along the canal banks were herds of grazing cattle, needing no fences to keep them in. The canals and drainage ditches serve a dual purpose; enclosure and drinking water. 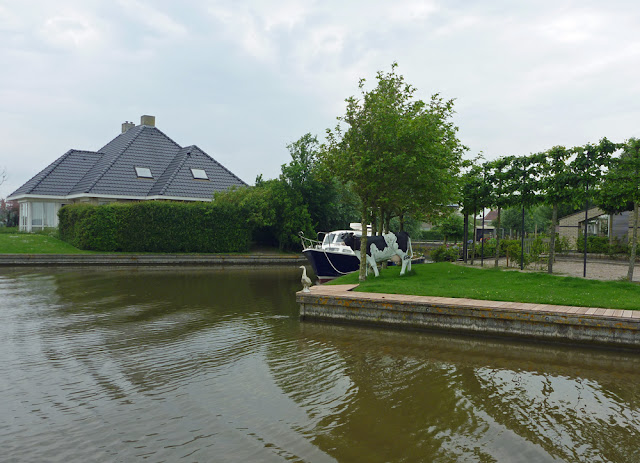 The canal wound through several tiny villages and settlements and we admired the wonderfully kept homes alongside the canal. Many of these had life-sized livestock sculptures as lawn ornaments, likely representing their owners' livelihood. And everywhere, there were boats moored. 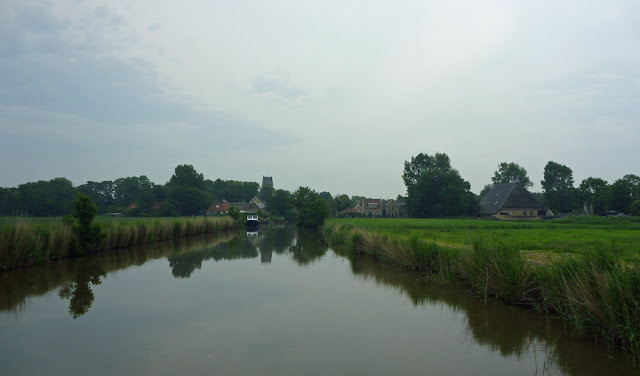 Shortly before noon we approached the village of Kimswerd, which offered a placid, almost surreal appearance as we neared. The day was very hot, with temperatures in the 30s and all morning the sky had been cloudless. We were relieved to have a layer of cirrostratus move in to offer some protection; our bodies are still rather pale from a rather cloudy spring. 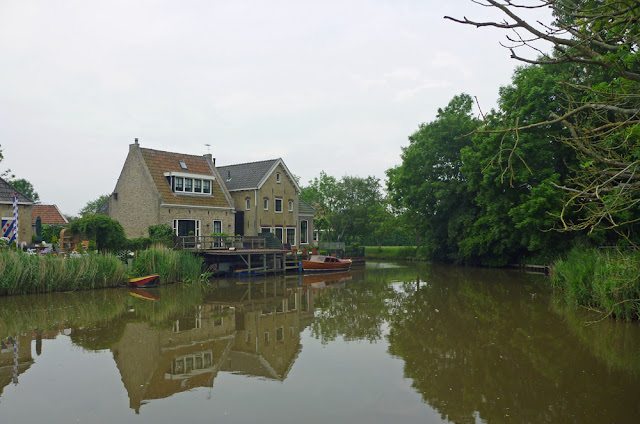 We wound our way around some tight turns in the village... 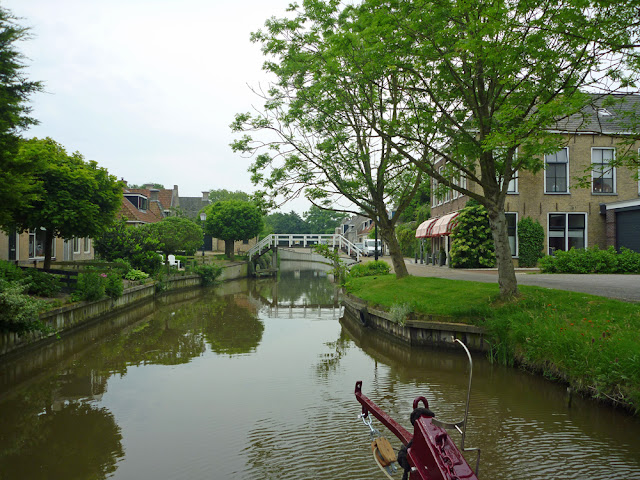 … and through some tight bridges. 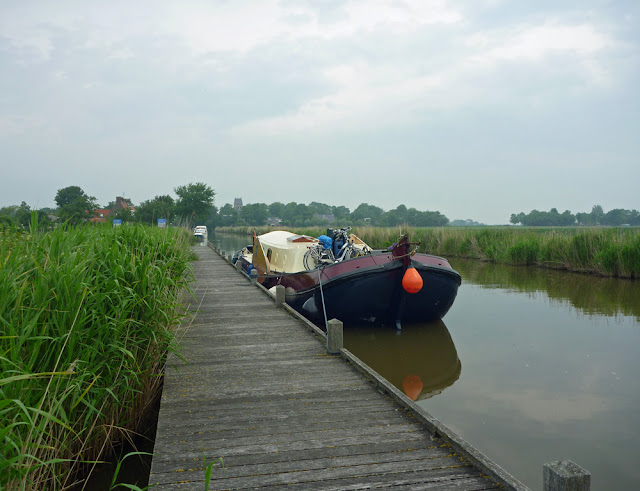 Just beyond the village, we saw a very pleasantly sited wooden wharf, and decided to secure alongside to pause for lunch. The structure is about 60 metres long and it has solid mooring bollards spaced about 4 metres apart. Alongside it runs the old towpath, now a bicycle route. We surmised that because the canal is so narrow and winding through Kimswerd, making moorage there impracticable, the wharf has likely been built to offer passing boats a place to stop to visit the village.

After a relaxing hour, we slipped our lines and continued along the canal. Shortly past 1500 we arrived in Bolsward and paused briefly as the Jansbrug was lifted for us to pass through. The bridge keeper then pedalled along and prepared the next two bridges for us, and each was ready for us when we arrived.  Within twenty minutes we were through Bolsward and back out into the farmland. 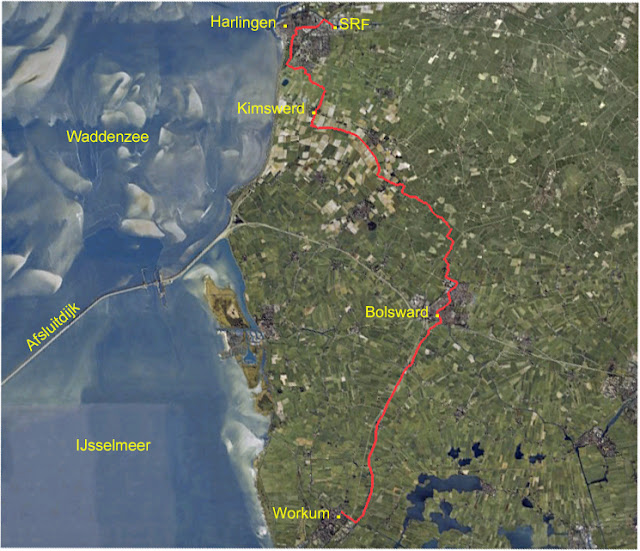 Four more lifting bridges and about eleven kilometres brought us to Workum, where at 1810 we secured alongside on the municipal moorings on the northern edge of the city. We had come 32.7 kilometres in about seven hours of motoring. Unlike our in sailboat Sequitur, there is no autopilot in Zonder Zorg. Steering is a constant hands-on affair with a huge oak tiller, and we were a tad weary. 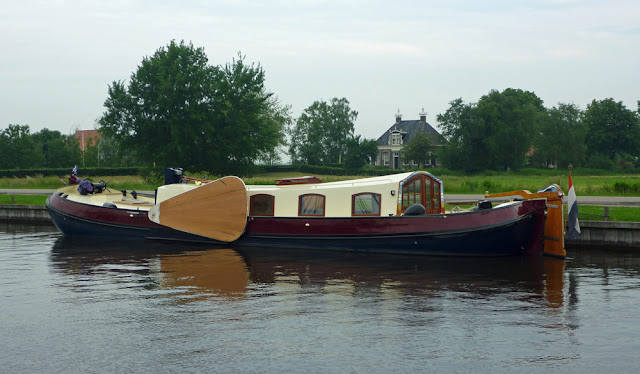 We decided to stay two or three days to relax and explore the area. The past three weeks or so had been rather hectic with leaving Vancouver, setting-up house in Zonder Zorg, wrapping-up the last bits of the refit and preparing to head south. We need to catch our breath. 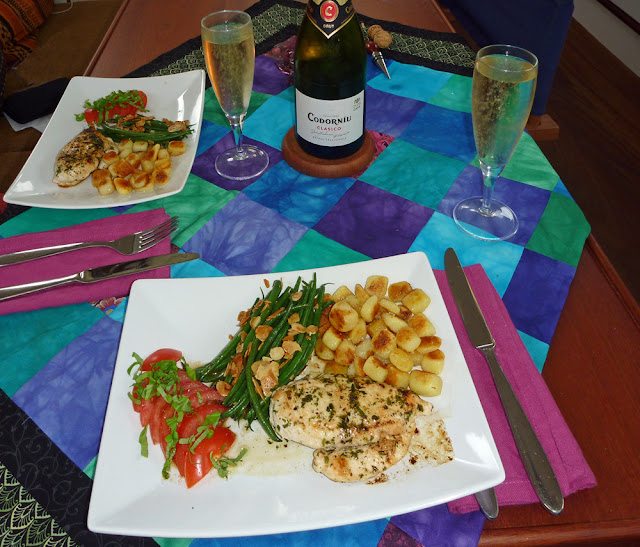 To mark the beginning of our new cruising life, I prepared chicken tarragon and served it with fine green beans almandine and sautéd small potatoes garnished by sliced Roma tomatoes with shredded fresh basil. With dinner we enjoyed a celebratory bottle of Cava Codorniu Classico. I think we will quickly learn to enjoy this style of cruising.
Posted by Zonder Zorg at 09:47