A Visit to Hindeloopen 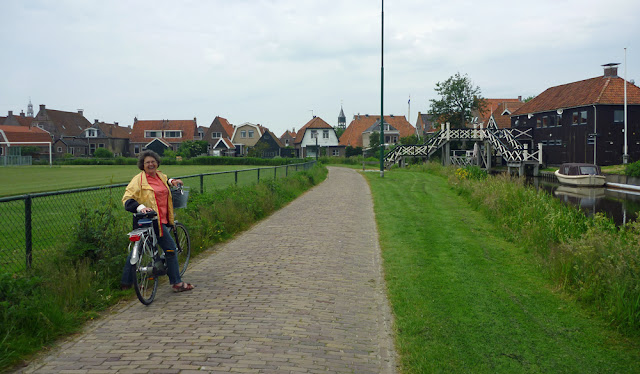 The thin cirrostratus that we had welcomed as a sun blocker on Wednesday afternoon had changed to a solid altostratus by evening. Thursday morning we were under low nimbostratus and rain appeared inevitable by mid-afternoon. Nonetheless, after a luxurious sleep-in and a late breakfast, we unloaded our bicycles from the foredeck and pedalled through Workum and out the other side and using TomTom on my iPad, we chose to follow the bike path on Oude Dijk that runs southwest toward the coast. After nine kilometres we arrived in Hindeloopen. 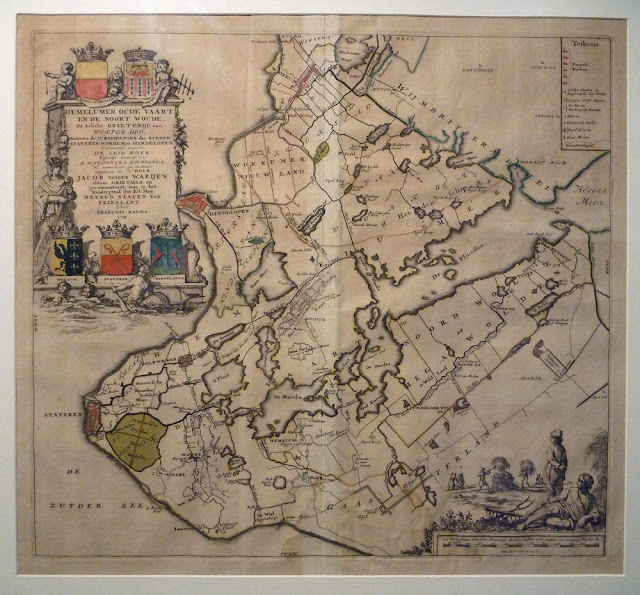 Hindeloopen was built on three mounds in the saltwater marshes along the Zuiderzee coast of Friesland. It was granted city rights in 1225 and became a member of the Hanseatic League in 1368. In the twelfth century mariners from Hindeloopen had begun voyaging along the North Sea and Baltic Sea coasts fishing and trading. Their strong overseas connections with foreign countries and infrequent contact with the hinterland across the marshes, caused the development of the Hindeloopen language; a mixture of West Frisian, English, Danish, and Norwegian. 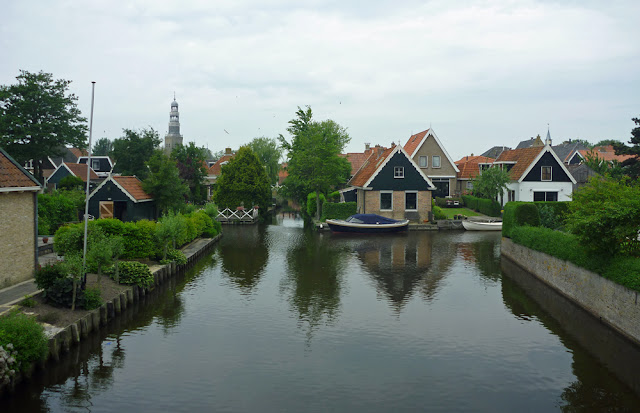 We pedalled into the tiny city, pausing frequently to admire the views. 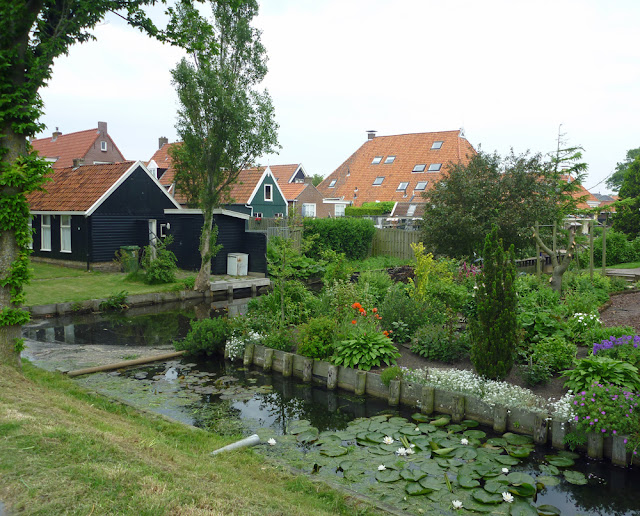 Everything we saw was tidy and well-maintained. There is an evident pride everywhere here. 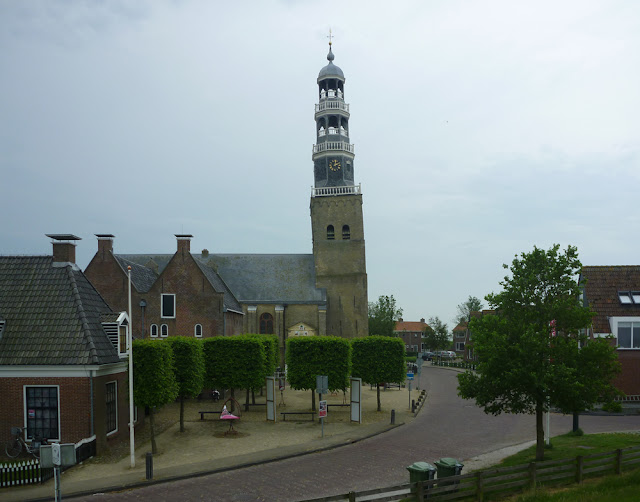 We pedalled around the church to get the best angle to see its leaning steeple. Though not as impressive as Pisa's leaning tower, it is certainly out of plumb. 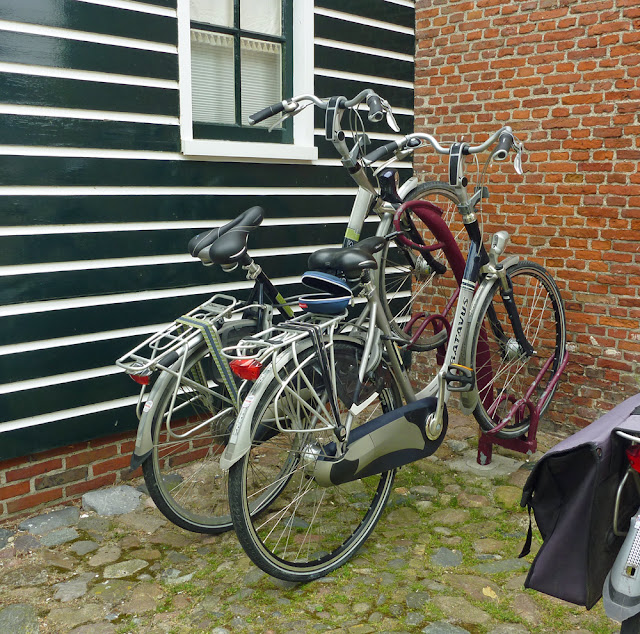 We locked our bikes in the convenient racks beside the church... 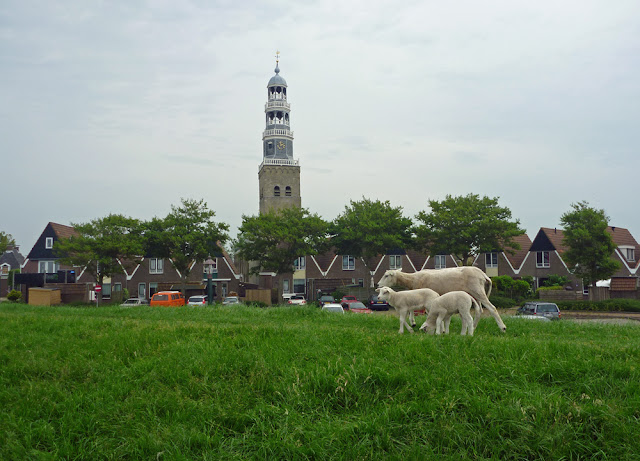 ... and took our panniers up onto the sea dike and down the seaward side to sit on the large blocks of riprap and have lunch. Edi had prepared ham and cheese croissants and we enjoyed them as the sheep and lambs around us grazed on the lush grass. 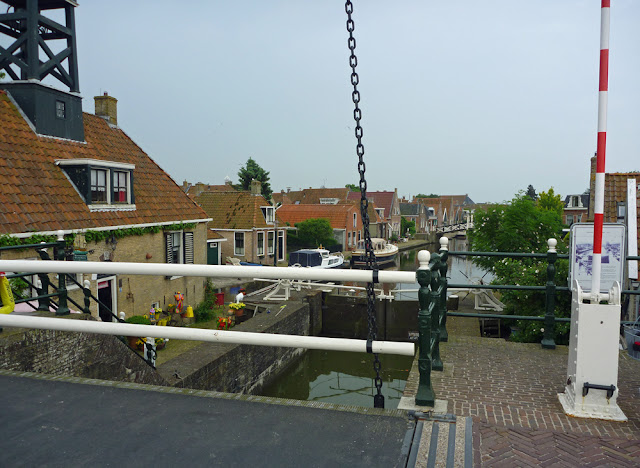 After lunch we left our bicycles on the racks and went wandering the city and browsing the shops. We bought a few things for Zonder Zorg. I bought a spare Friesian flag for the jackstaff and Edi bought some of the famous Hindeloopen fabrics and some Douwe-Egberts Hindeloopen cup and saucer sets from the artist who designed them. Then it started to rain. 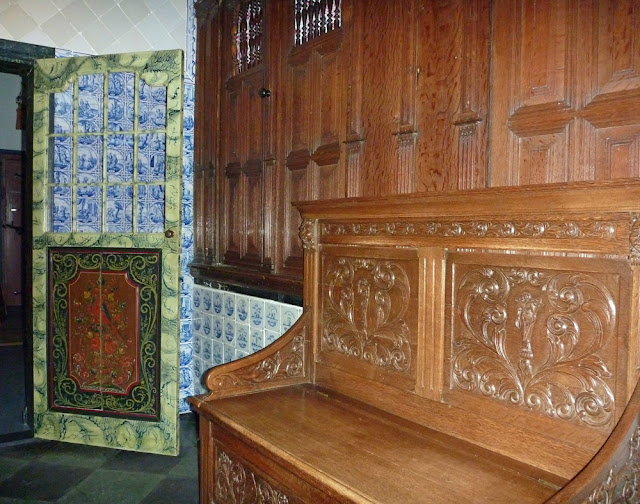 We walked back to our bike rack, which was nestled between the church and the museum. The continuing heavy rain convinced us that this was the prefect time to visit the museum, which is in the building that was the City Hall from 1683 to 1919. The receptionist told us that with all the shipping trade in the seventeenth and eighteenth centuries, the citizens had become quite wealthy and spent a great amount of money in Amsterdam on precious fabrics, furnishings and decorations. They bought many of the goods imported from Asia through the Dutch East India Company. 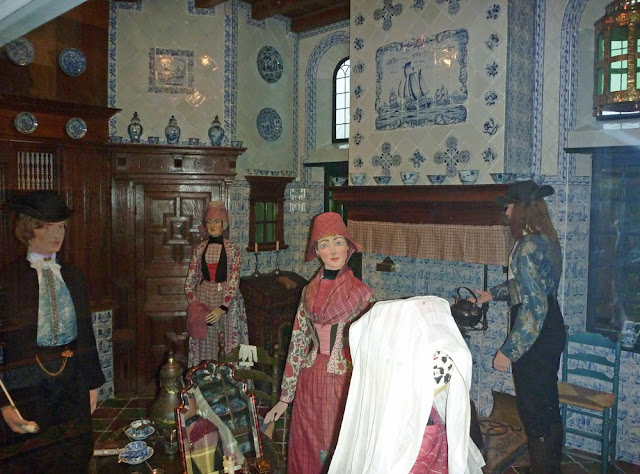 The rich town developed its own distinctive costume and a unique style of colourful painted walls and furniture. 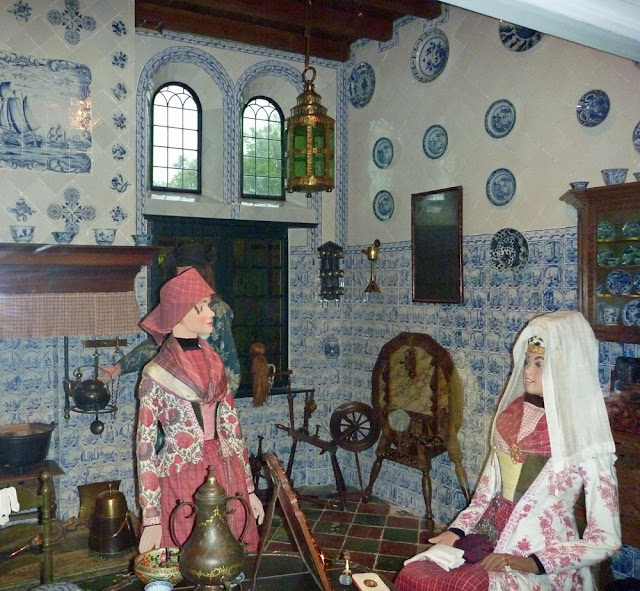 The fabrics and clothing designs showed a distinct Asian influence. 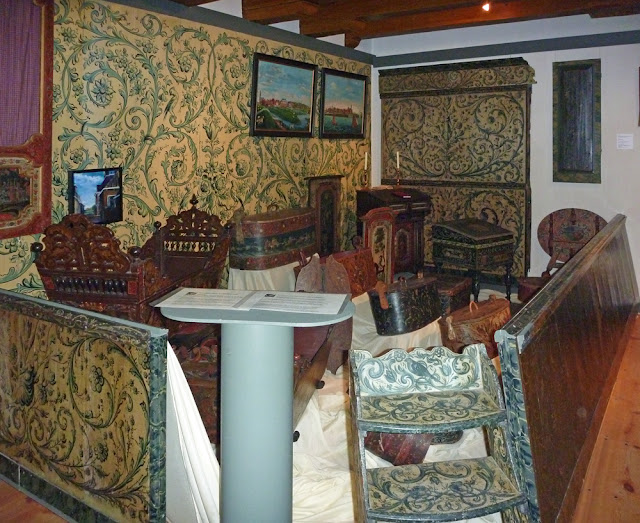 As the prosperous times waned, and oak could no longer be afforded, furniture and panelling were made with simpler, less expensive woods. These were ornately painted by the locals to replicate the intricate carving of the oaken pieces. Thus the now famous Hindeloopen decorative style evolved. 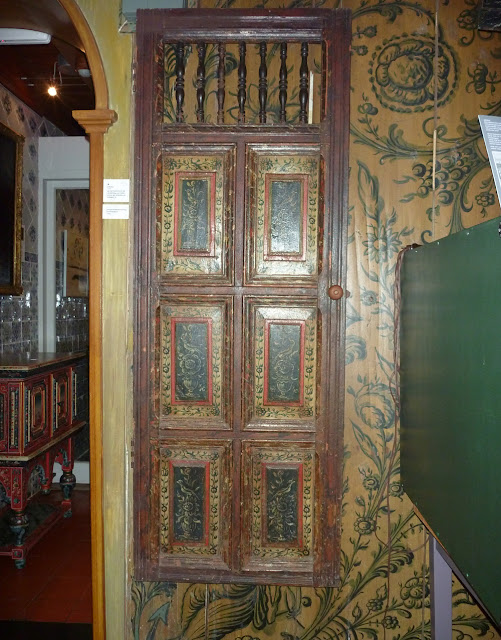 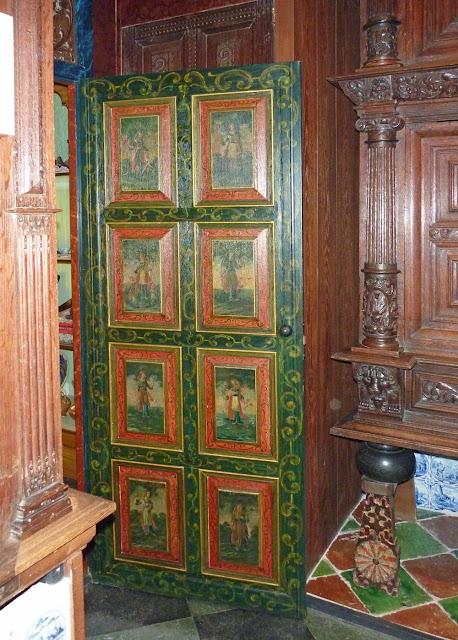 The museum was full of wonderful examples of early Hindeloopen decorative art. 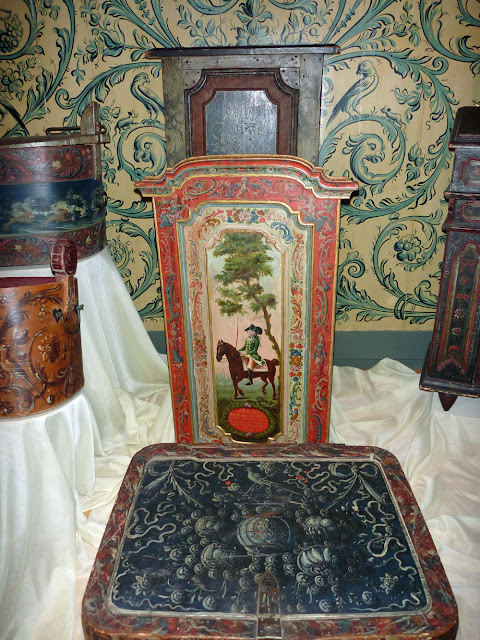 After nearly two hours of admiring the displays, we were filled to the brim with this wonderful art. We left the museum and scurried fifty metres through the downpour to Restaurant Sudersee, where we had a koffie en chocoladecake to help the rain diminish. The rain persisted, but to help us pass the time, the owner, Piet Bakker offered his wifi code and a link to a weather radar site so we could watch the progress of the storm on my iPad.

After an hour's pause in the restaurant, the radar showed the heavy downpour decreasing to only a downpour, so we took that weather window and pedalled back the shorter six kilometre route to Workum. It was less scenic, but with the heavy, wind-driven rain, we weren't really into looking around that much. Back onboard Zonder Zorg we enjoyed very long, hot showers and were very quickly relaxed and comfortable again.