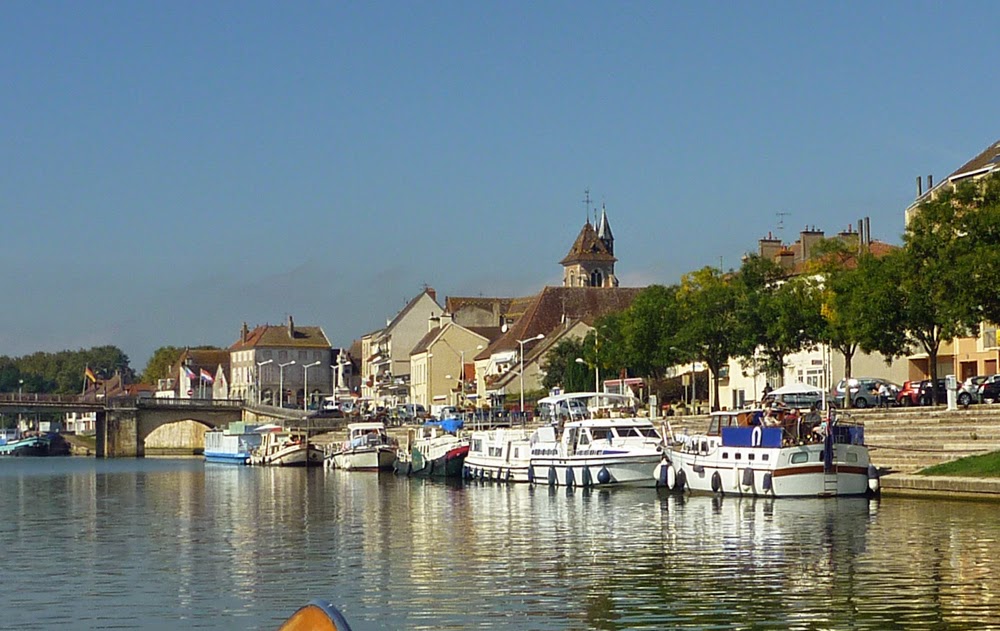 After four days relaxing in Saint-Jean-de-Losne, on Sunday 21 September we slipped from our moorings on Quai National and headed up la Saône.  It was pleasant to be on the river again; it is broad enough for relaxed steering and we faced negligible current. 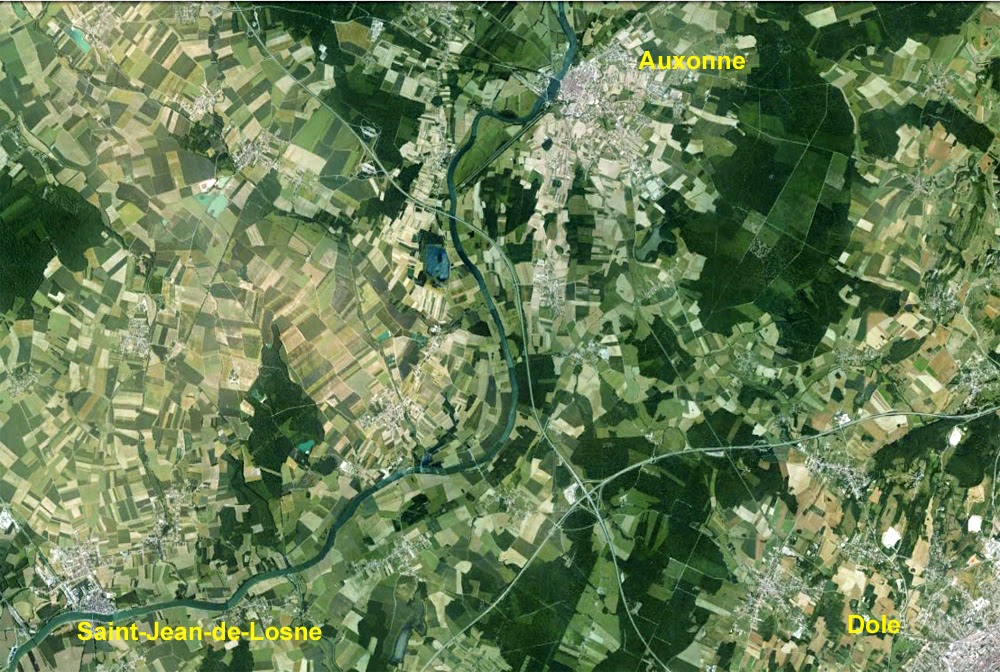 Our destination was Auxonne, eighteen kilometres upstream. This city is at the eastern edge of the Burgundy region, just three kilometres from the boundary with the Franche-Comté, a position which made it very strategic in battles for many centuries. 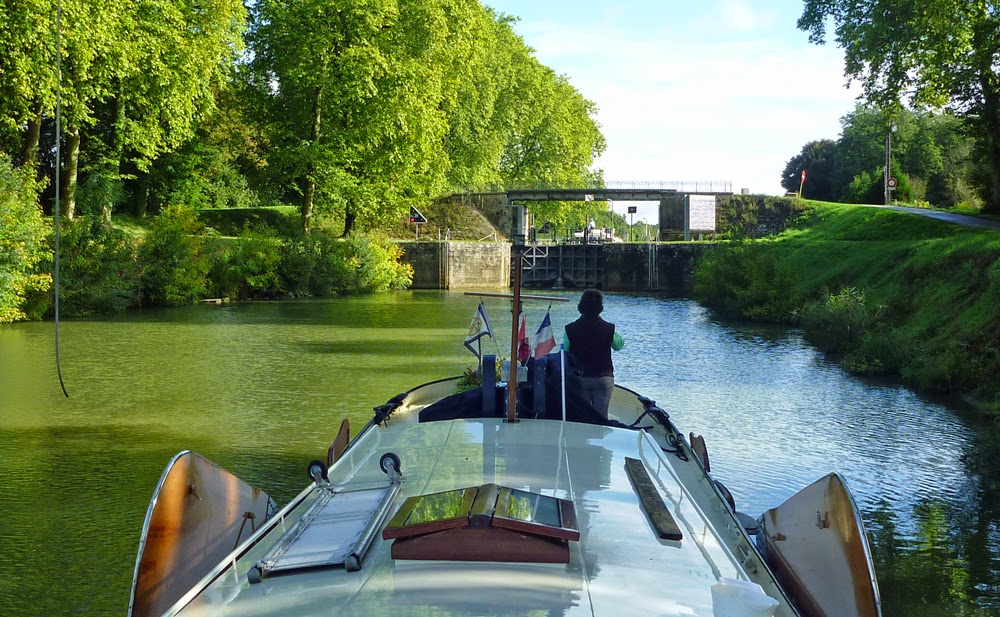 A pleasant two hours later we arrived at Écluse Auxonne, the only lock on the route. Two down-bound boats were just beginning to enter the chamber, so we had to wait. 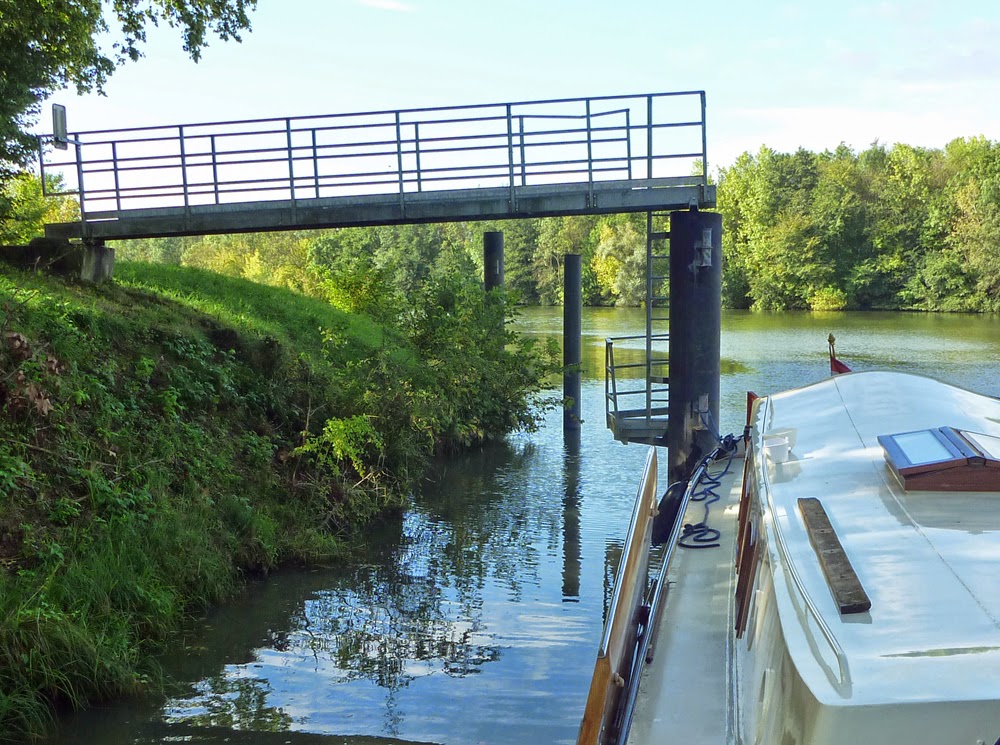 After manoeuvring Zonder Zorg’s bow for Edi to twist the dangling rod to signal the automatic lock system, I backed down toward a duc d’Albe, tossed a loop around its bollard and secured the bow with the spud pole. The waiting station is set-up for 38-metre barges and there is no provision for anything shorter. 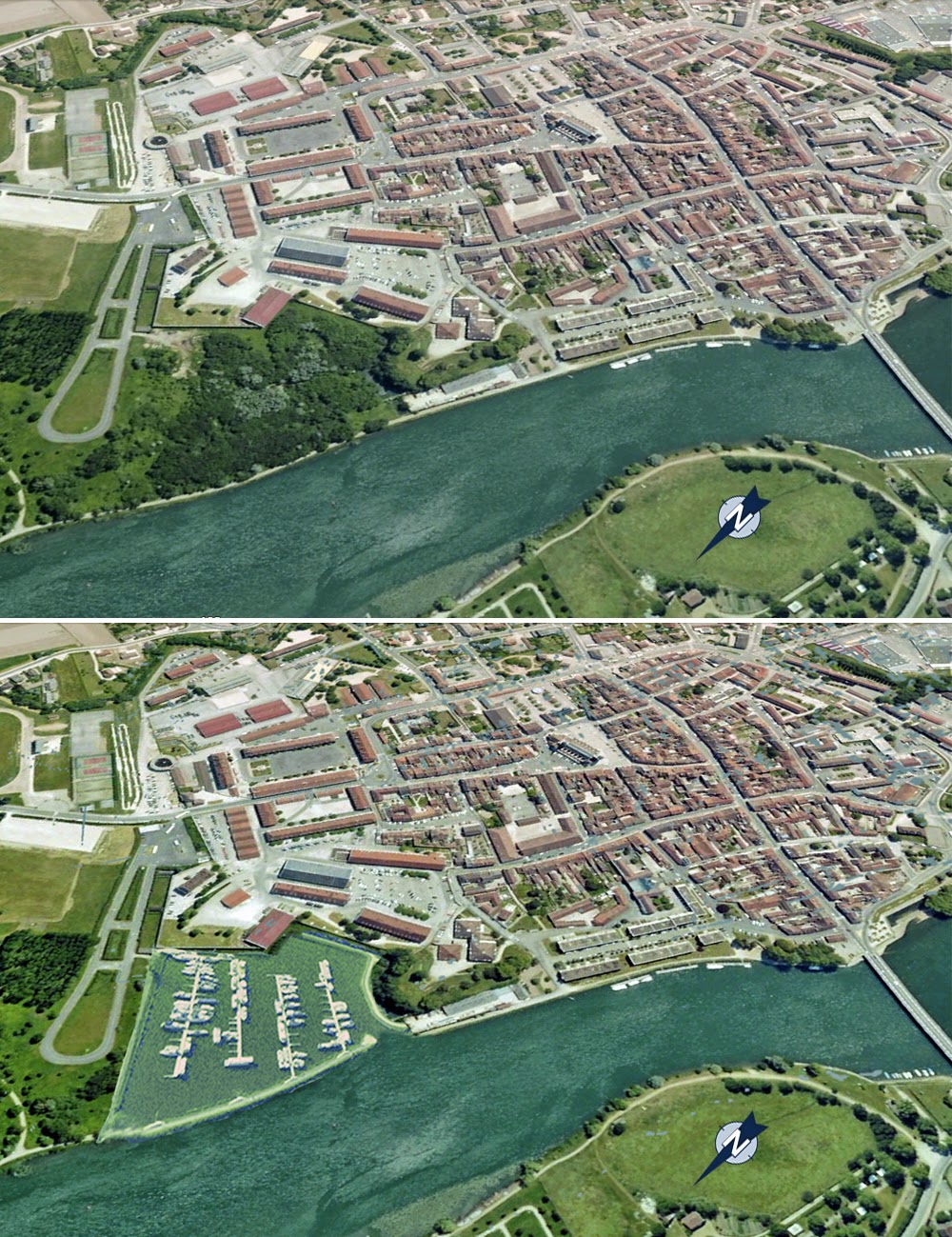 Out of the lock we motored along the bypass canal back to the river and then past the centre of Auxonne to Port Royal. Four years previously the marina had been dug out of an unused copse on the northwestern corner of the city close under its centuries-old fortification walls. 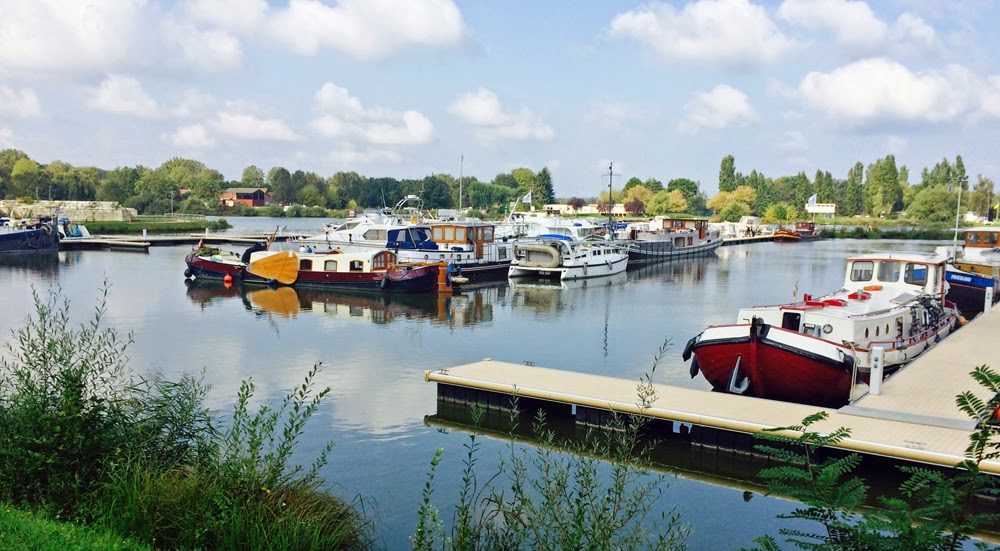 It was midday when we entered the port and nobody was around, so we took a mooring on the T-head at the end of the second wing of floats and settled-in to wait for an assigned mooring. 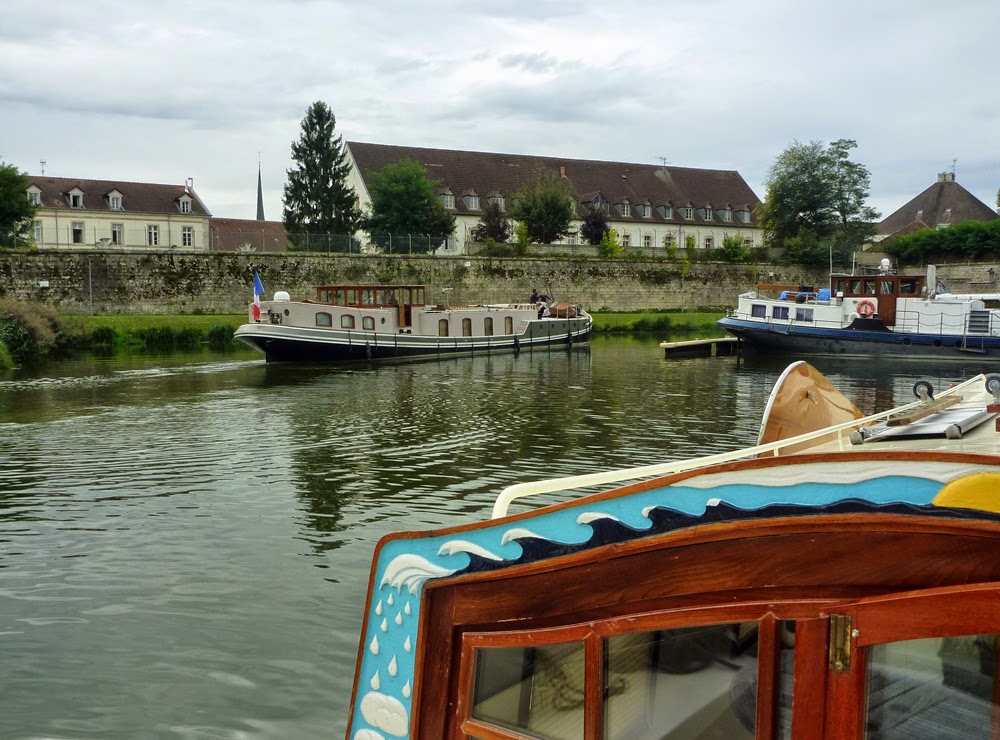 Beside us, across the city walls were the military barracks that occupy much of the northwest quadrant of the city. 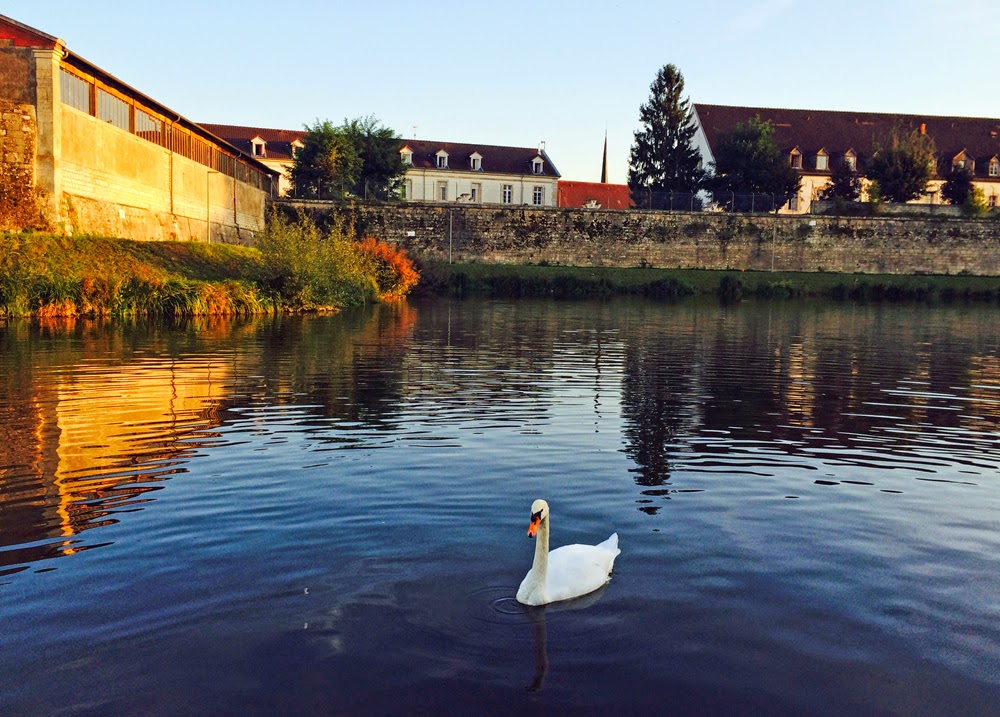 In the late afternoon there was a knock on the hull. Roy, the Capitain was looking for mooring fees and asked how long we would be staying. When I said we were here for the winter, he told us that he had no notice of our coming. I told him Charles had said there was plenty of room for us, but it became apparently that he had done nothing beyond that. Roy told us there was no more room for anything above fifteen metres. I then told Roy of my email exchange with Charles many months before and of the confirmation of winter space in Saint-Jean-de-Losne and of how that ball had also been dropped. Roy took sympathy and said he would juggle a space for us. 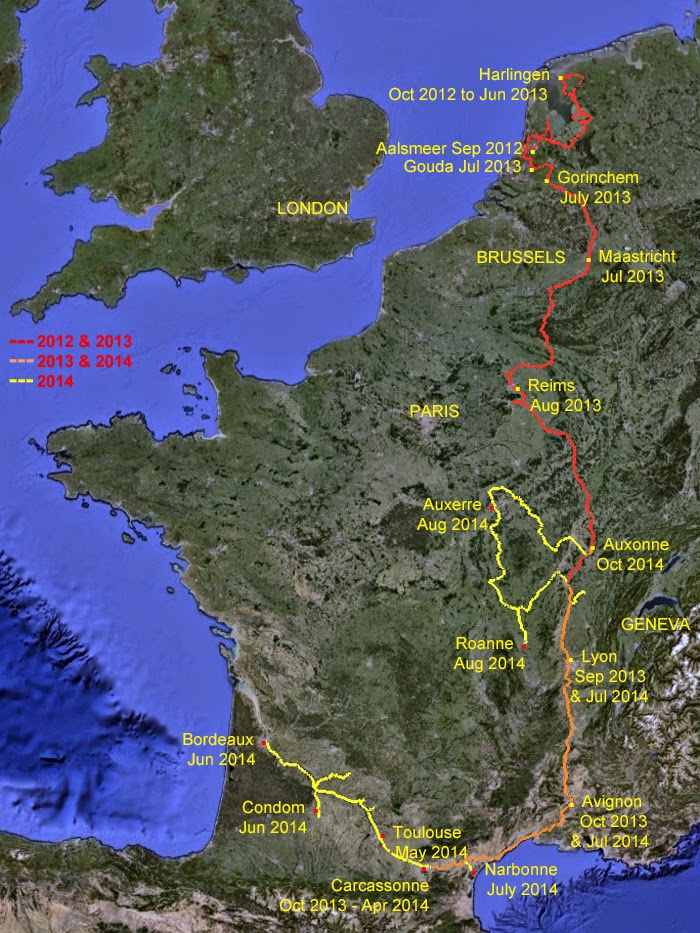 Relieved, we began to acquaint ourselves with Zonder Zorg’s new winter quarters and we reflected on where we had been. In the twenty-five months since we took possession of our skûtsje, she had taken us a total of 4968 kilometres through 1120 locks on 121 waterways in three countries. During all this travelling, we had experienced only three problems with the barge: the house battery had suddenly died and refused to take a charge, a connection in the central heating had failed and the automatic igniter for the water heater/furnace required frequent resetting. 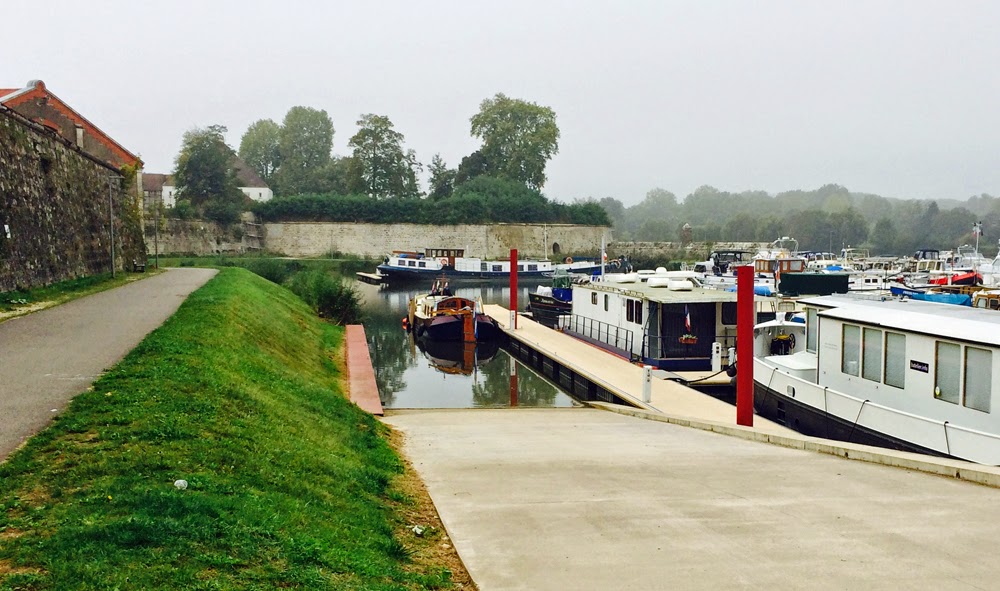 We were waiting for the arrival of the engineers from SRF in Friesland with our 22.6 kWh battery. In July they had removed it and installed a temporary 14.6 kWh bank. Even though they suspected the problem was from a faulty connection, they wanted to ensure the battery was not damaged, so they had taken it back to Harlingen. Now their drive was considerably shorter than it had been to Capestang in July. To make their job easier, the evening before their scheduled arrival we moved Zonder Zorg to the float alongside the haul-out ramp. This would give them easier unloading and reloading. 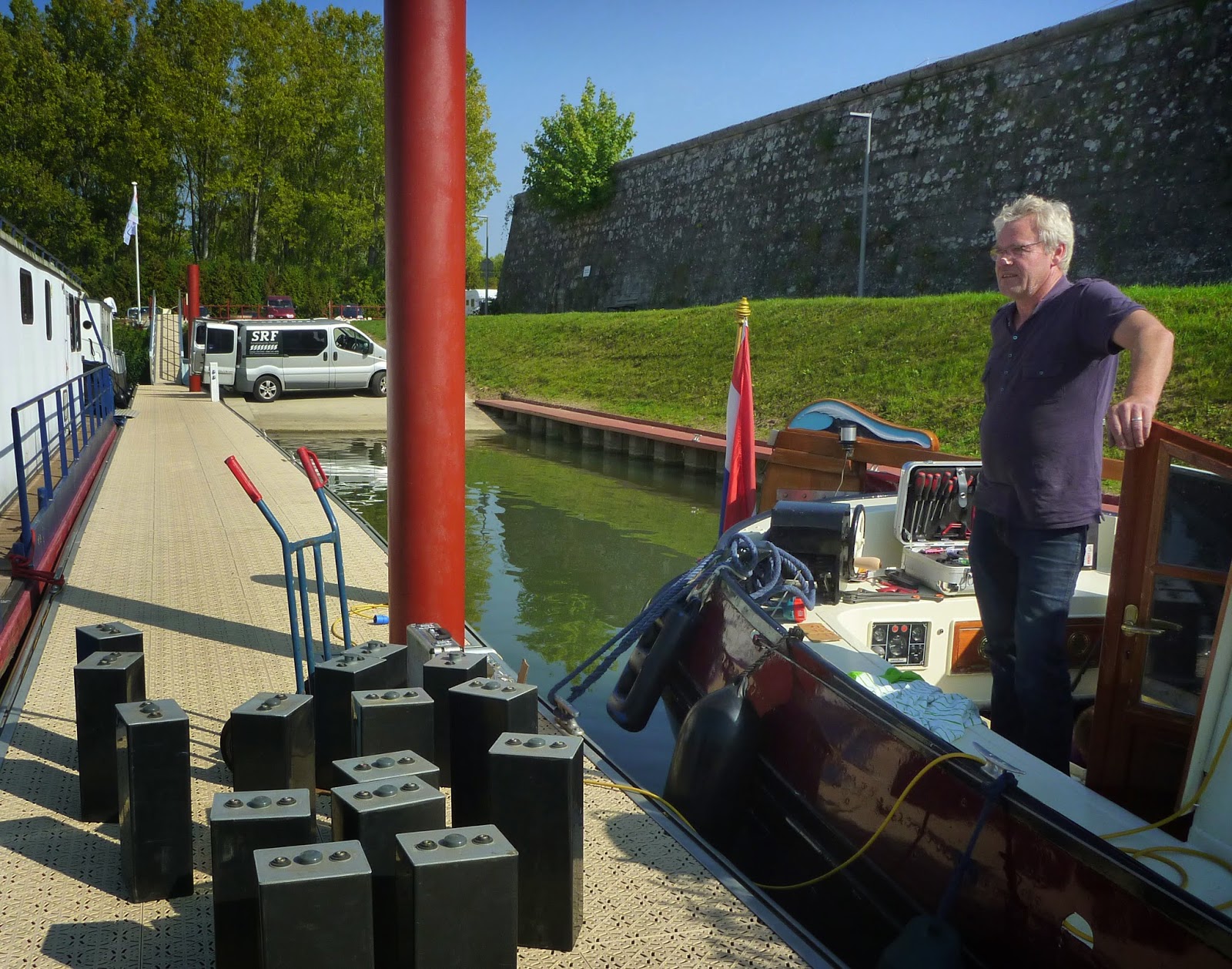 From a 0400 start in Harlingen, Wychard and Laurens arrived mid-morning after an 875 kilometre drive, and after cups of espresso, they set to work. While Wychard began disconnecting the temporary battery, Laurens loaded the more than half a tonne of battery cells from the van to the float and moved them along to the barge. 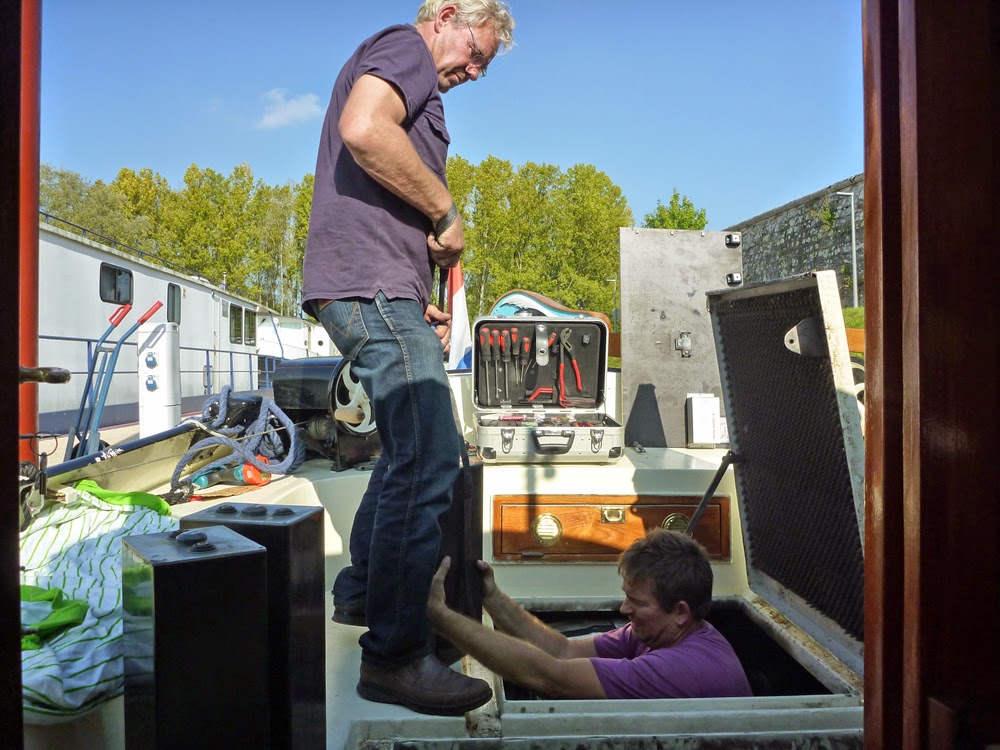 They manhandled the cells of the temporary battery out of the engine compartment, and then after a large platter of ham and cheese croissants, they began lowering the cells of our original battery back into place and connecting them. The manufacturer had bench tested each cell and all were deemed to be in top condition. By mid-afternoon the electrical system was reconnected and we load-tested it with the oven switched to microwave-convection and Edi’s hairdryer on high, for a total load of 2950 Watts. The system passed. The men then set to work on the faulty igniter system on the water heater/furnace. By 1830, after many blind leads, they had it repaired and we shared some welcomed Heinekens after their very long day. 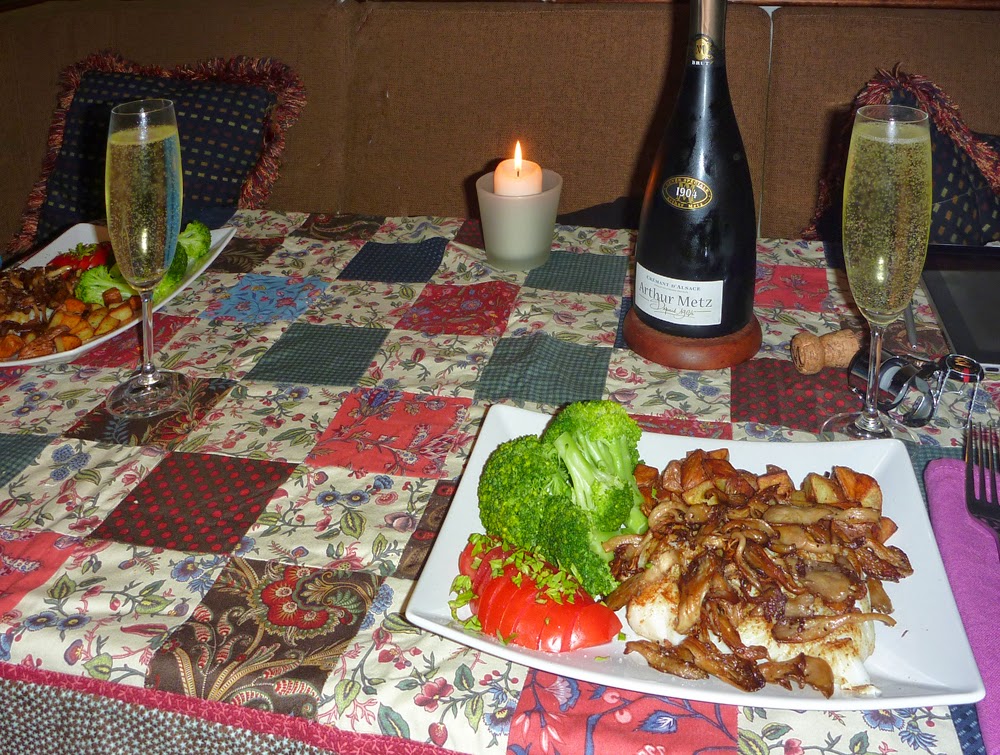 Later in the evening, after Wychard and Laurens had gone off to their hotel for a well-earned rest, Edi and I celebrated the completion of repairs with some Arthur Metz Cuvée Speciale 1904 Crémant d’Alsace. To go with it, I prepared cumin-crusted dos de cabaillaud topped with butter sautéed pleurottes and accompanied by pommes rissolées and steamed broccoli. 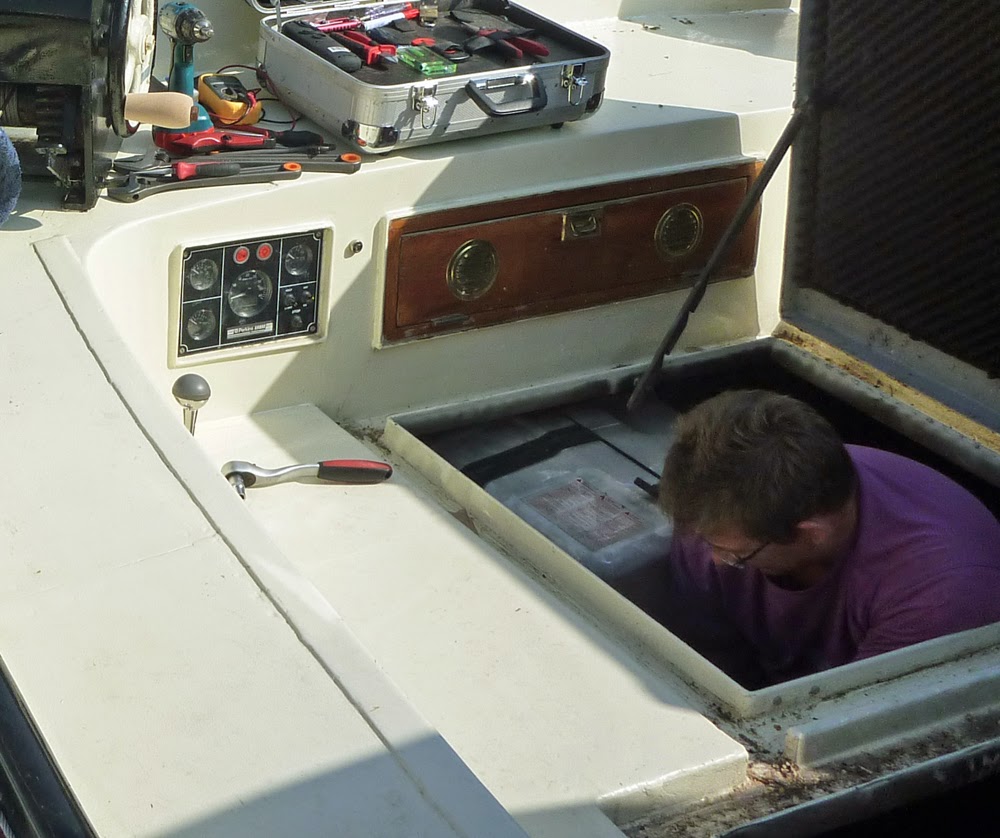 After dinner we heard the water heater start to cycle and we listened closely for it to ignite. It aborted the cycle. I emailed Wychard, hoping he would see the message before starting to drive north. There was a knock on the hull as I was pulling our first espresso the following morning. Wychard and Laurens spent over an hour in the engine compartment before Laurens finally noticed that a sensor had been installed in an inverted position, which caused it to often give wrong information on the flame, which led it to abort the start-up. He turned it over and successfully ran the system through several start-up cycles. They left mid-morning, hopeful that the last of our short list of problems from the refit had been resolved. All this service was without charge; rather it was a follow-through on SRF’s commitment to ensuring their work is satisfactory. Wychard and Laurens, both professional engineers are two of the four partners in the company. Wonderful! 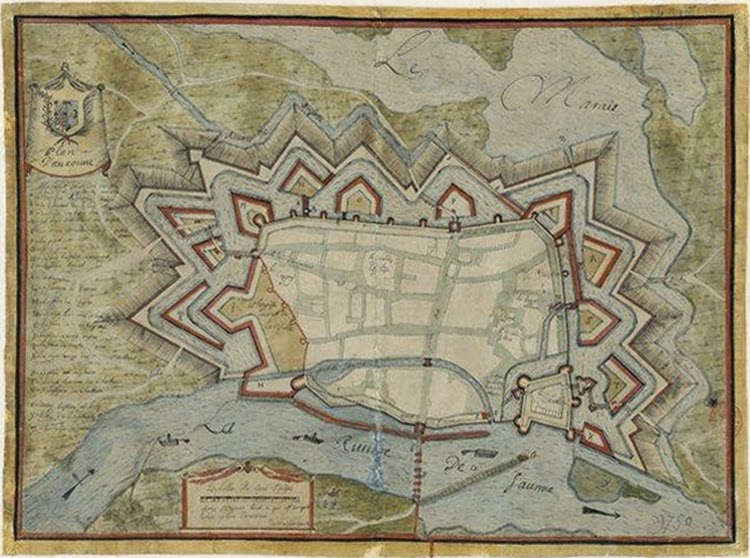 Over the next several days we explored Auxonne. The first settlements in the area date to the ninth century as fishing camps along the river. The 843 Treaty of Verdun to divide Charlemagne's empire had used the Saône in this area as the boundary between East Francia and Middle Francia. This placed the site of Auxonne on the Germanic side of the line. In 1197 Stephen II, Count of Auxonne moved his allegiance across the river to the Duke of Burgundy, and forty years layer all the possessions of the Count of Auxonne in the basin of the Saône were transferred to the Duke of Burgundy. With this, Auxonne became a bridgehead of the Duchy on the eastern bank of the Saône, ostensibly on Holy Roman Empire soil. This position was progressively fortified, culminating by the middle of the fourteenth century in a wall with twenty-three towers and four gates girding the small city. 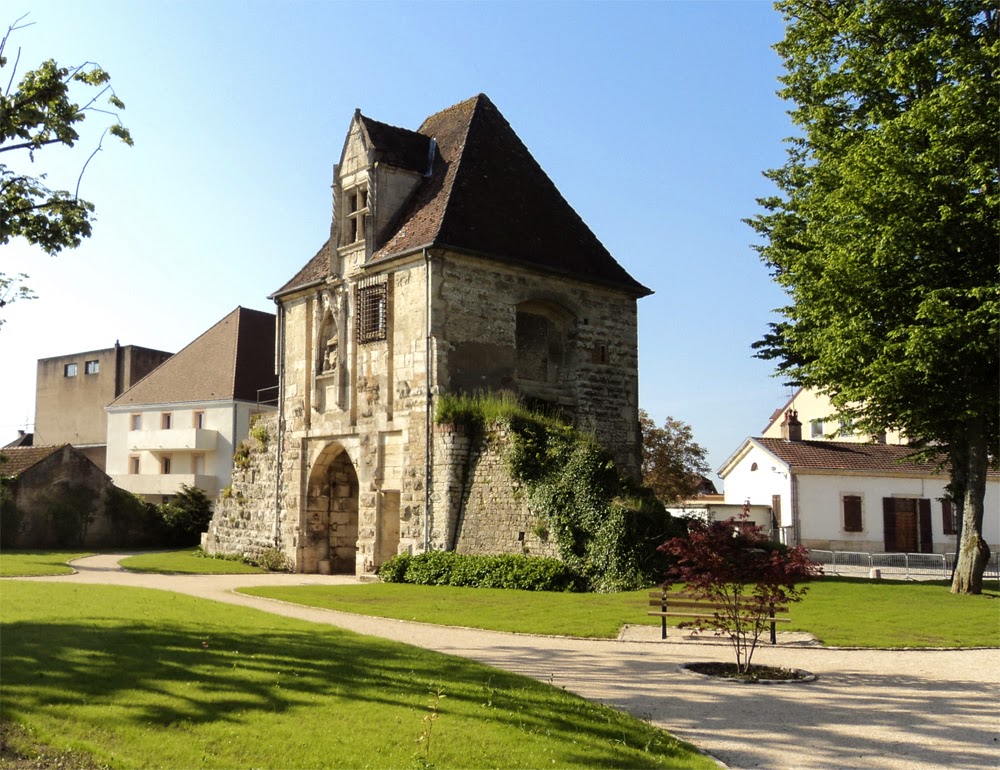 The walls were strengthened and the gates were rebuilt. One of these, Porte de Comté was built in the fifteenth century on the eastern side of the city, leading out into la Franche-Comté. It is preserved today as a national monument. 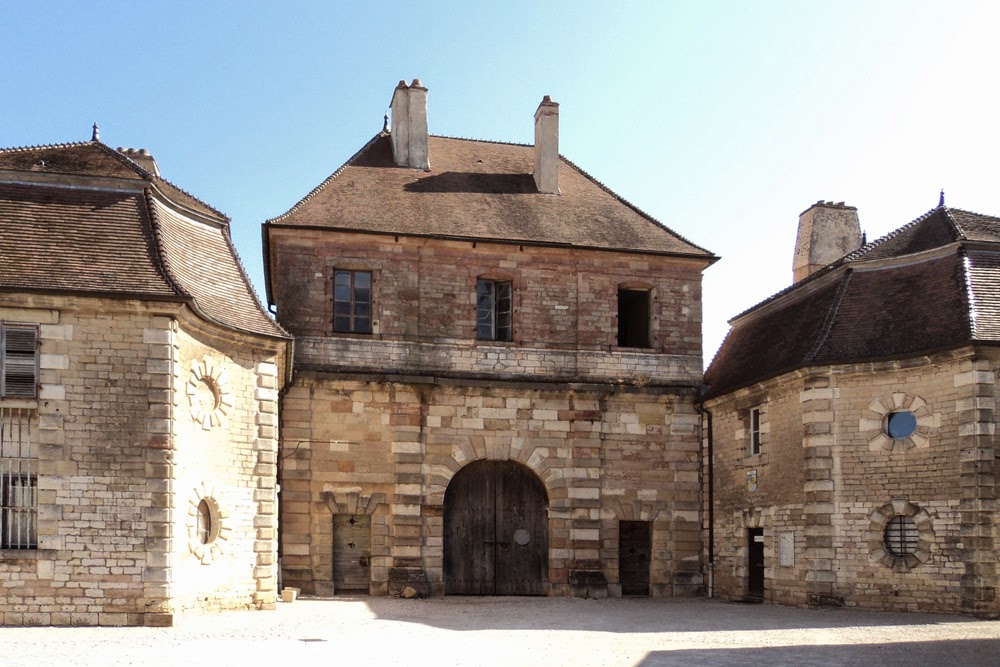 Another surviving gate is la Porte Royale built in 1775 to replace an older one on the northern side of the city, near the new marina, Port Royal. This makes a splendid play on words and on history. 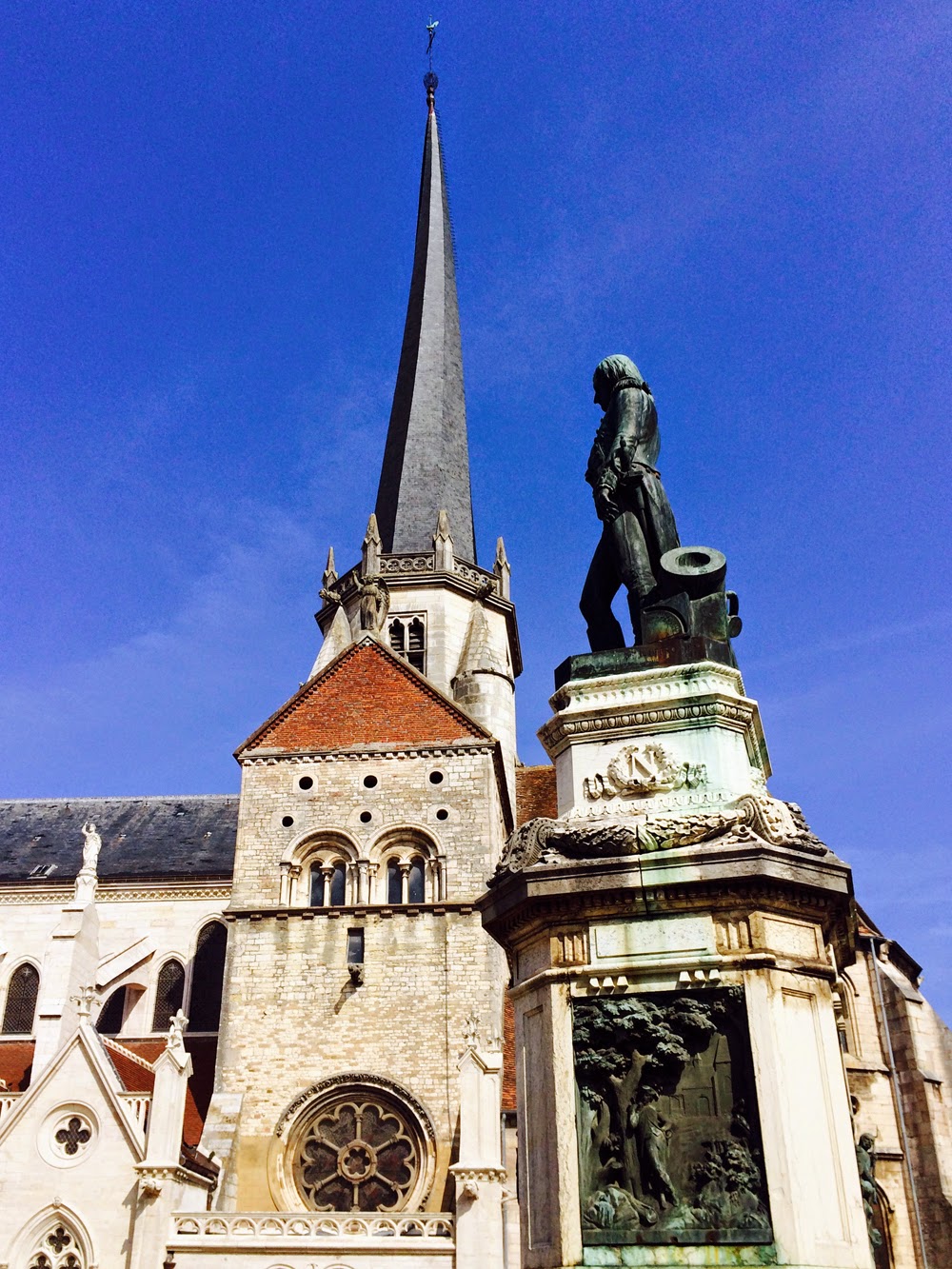 In the centre of the city stands Notre Dame, which was begun in 1200. Among other notable features of the church is the helicoidal spire. This rises thirty-three metres above top of stone tower. In the square beside the church stands a statue of the young Lieutenant Bonaparte. Napoleon trained as an artillery officer for a total of twenty months during his two postings here between 1788 and 1791. Among the treasures inside the church is a statue named la Vierge au Raisin, the Virgin of the Grapes. It is attributed to Claus de Werve, who had completed the magnificent sculptures for the tomb of Duke Philip the Bold in 1410, which we had seen in Dijon. 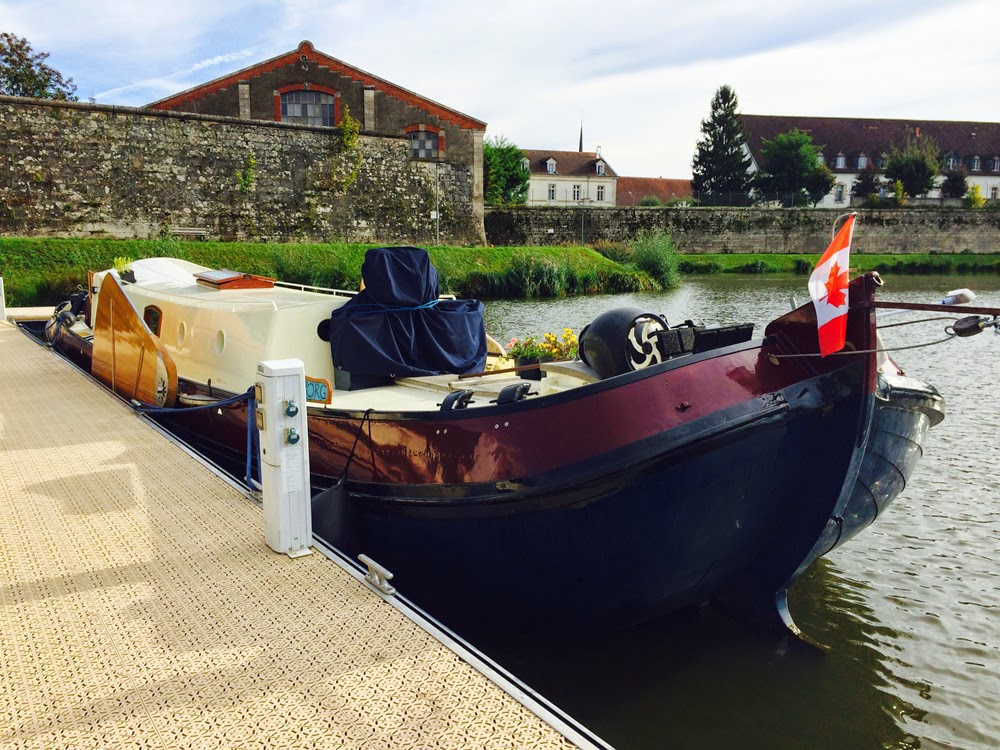 Besides exploring Auxonne, we began preparing Zonder Zorg for winter. Among the tasks was tending to the paint scrapes from more than eleven hundred locks and two hundred moorings. There were surprisingly few, mostly on the black rubbing strake, which had been designed to take the punishment. After some wire-brushing, cleaning and a few dabs of paint, she looked like she had never left port. I moved the bicycles down into the fo'c'sle along with other attractive portable items. The bicycle cover was repositioned to wrap the stricken mast, mast step, spud pole winch and gaz lockers protecting them from both eyes and winter. 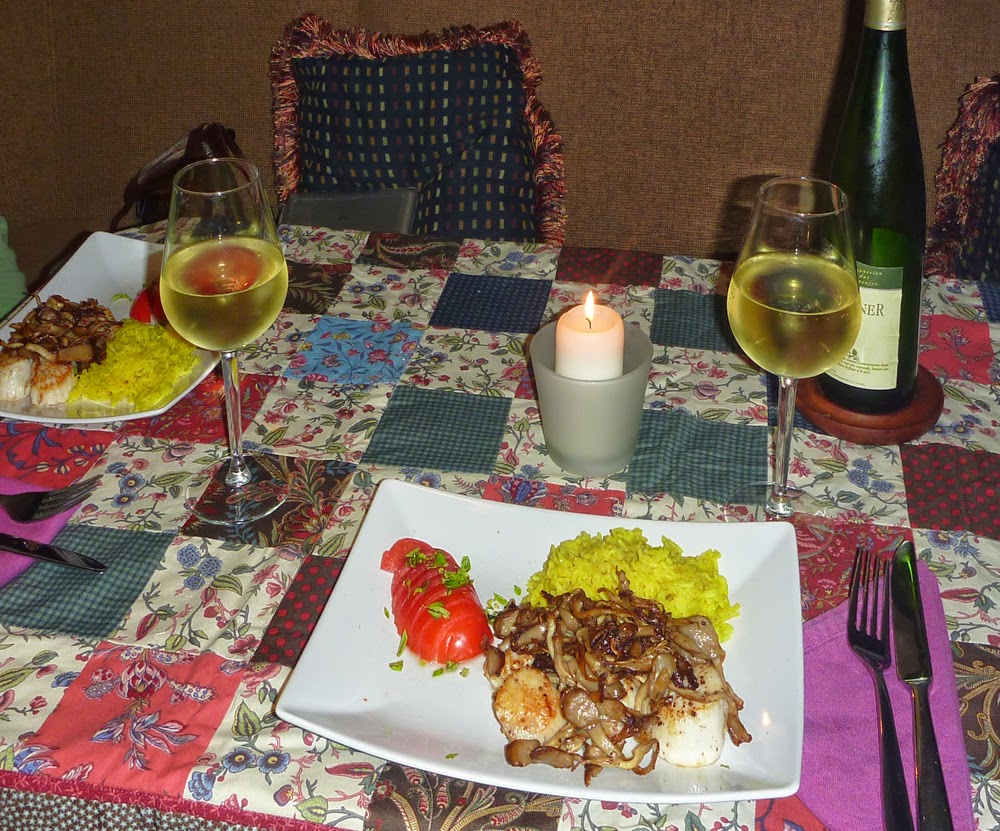 We had been steadily reducing the contents of our pantry, fridge and freezer, aimed at having nothing perishable remaining by the time we closed-up Zonder Zorg for the winter. On the morning of 7 October we took the train to Dijon and drove back in a rental car from Hertz. In the evening we had our season’s last dinner aboard. I seared some jumbo coquilles St-Jacques, smothered them with crisply sautéed pleurottes and served this with saffroned basmati rice and sliced tomatoes with fresh basil. It was deliciously accompanied by an Alsatian Gewürztraminer. 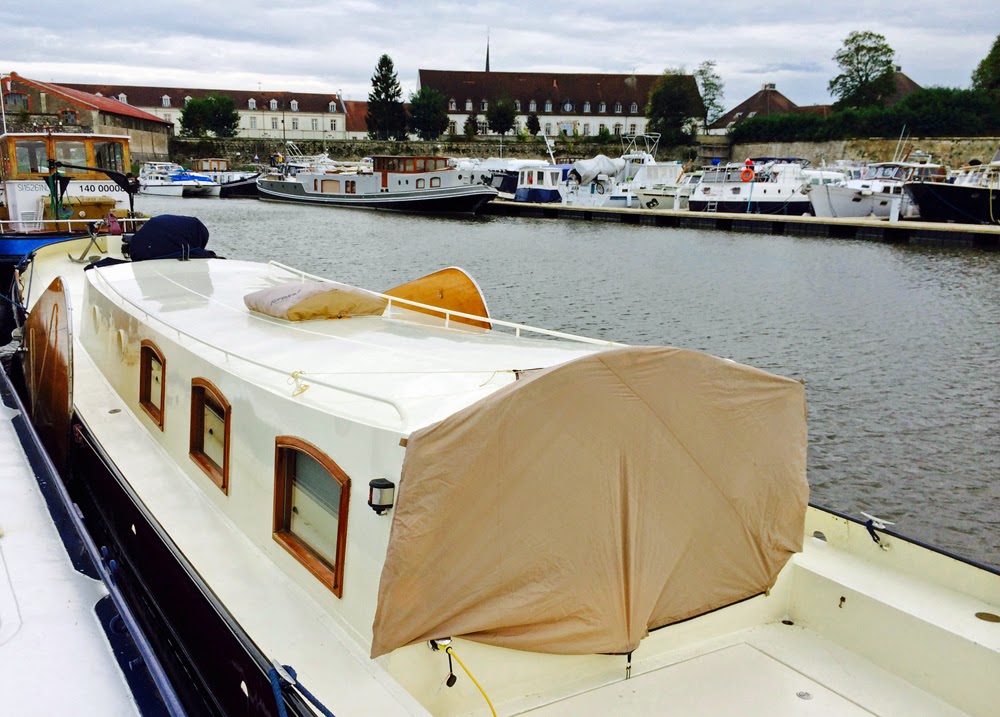 The next morning the mechanics from H2O came to do the winterising of our systems. When they had completed their work, we closed-up Zonder Zorg, placed the protective covers over the tiller and klik, the skylight and the friese and rear of the roef. We then loaded our luggage and drove to a hotel near CDG airport to be ready for our flights to Canada the following morning. Zonder Zorg was ready for winter, but we weren’t.
Posted by Zonder Zorg at 19:44