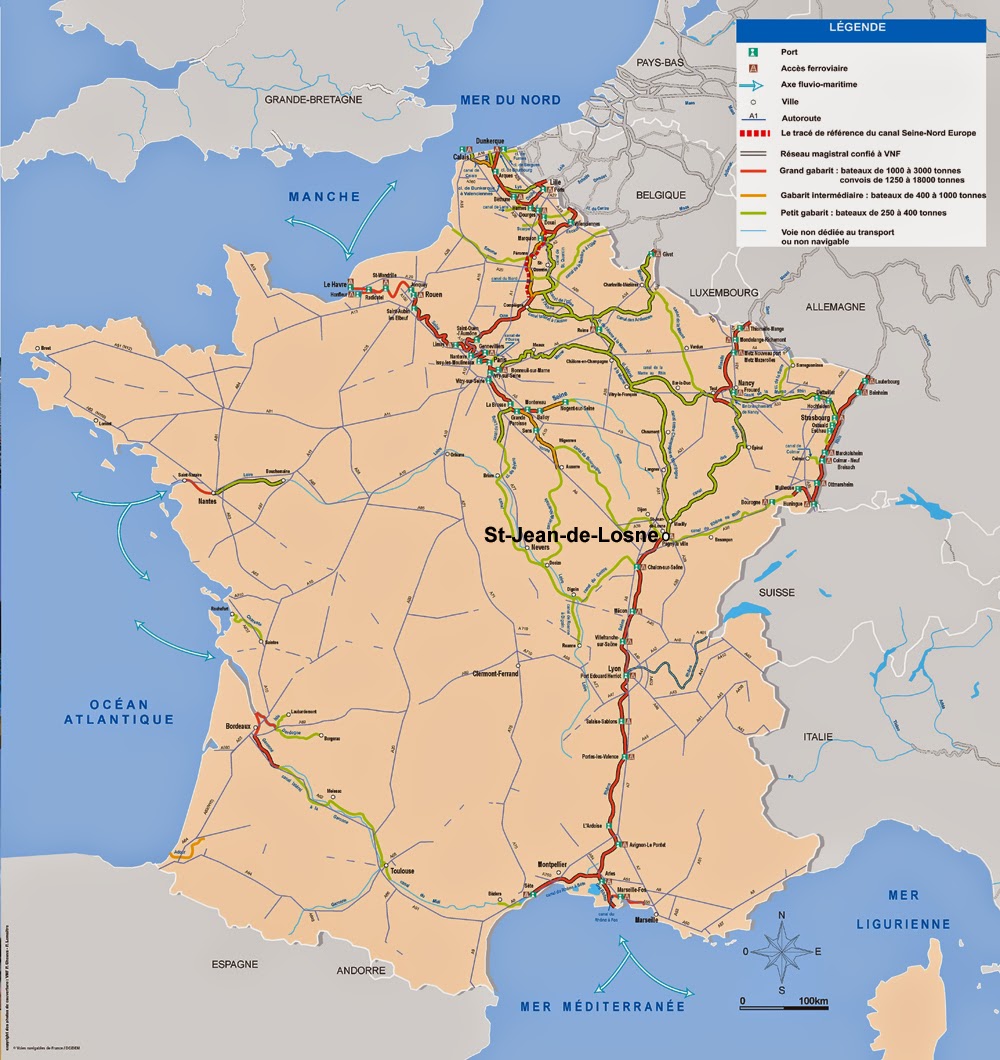 We had arrived in Saint-Jean-de-Losne on Wednesday, 17 September and had moored along Quai National. This town is quite legitimately referred to as the centre of the French canal system, since from this hub it is possible to head in six different directions. 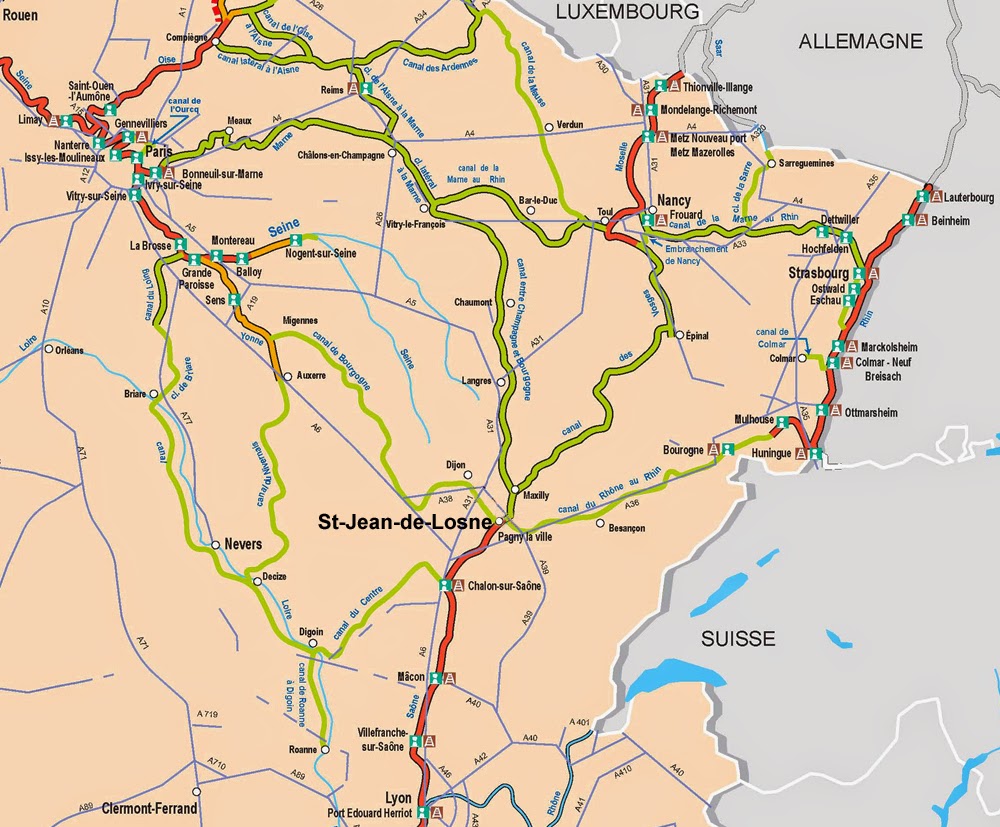 From here boaters can choose to head southward along the Saône and Rhône to the Provence and the Midi, they can head southwestward across canal du Centre to the Loire, northwestward along canal de Bourgogne to the Yonne and Seine, northward on canal entre Champagne et Bourgogne to the Champagne, northeastward along canal des Vosges into Loraine or slightly more eastward across the Vosges on canal du Rhône au Rhin into the Alsace. 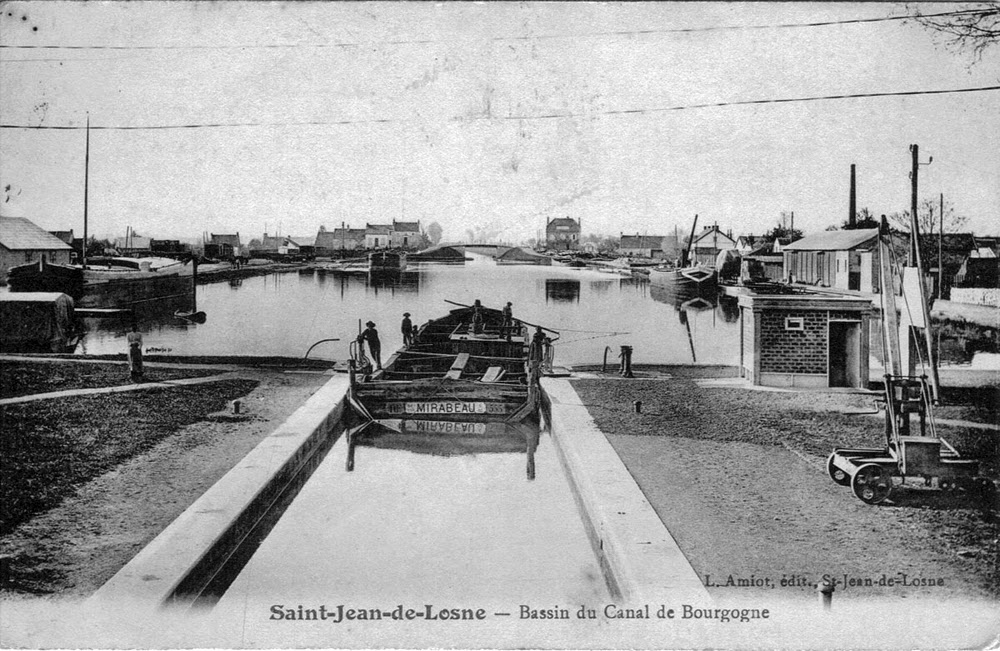 With its location at this important barging hub, a marine infrastructure grew in the years following the 1832 opening of canal de Bourgogne. Much of this was immediately upstream of the first lock on canal de Bourgogne in the wide basin that was designed to serve both as a port and as a repair and maintenance facility. 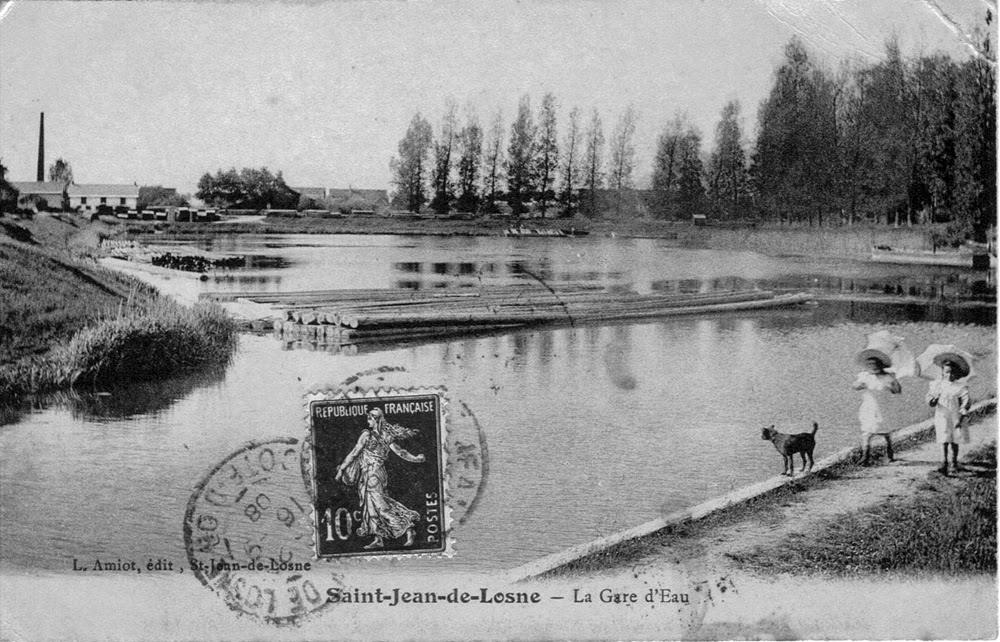 Just below the lock, at the level of the river is a large excavated basin, la Gare d’Eau on the north side of the town. This was dug as a place of refuge for barges when the Saône was in flood. This Water Station was also used to store rafts of logs that had been floated down from the forests of the Vosges and Jura.

With the dwindling barge trade, by the mid-1970s the repair and maintenance services had little business, so many of the skilled marine tradesmen had moved to other jobs or to other regions. As commercial use of the canals declined, pleasure use was slowly increasing. In 1972 Blue Line began offering self-drive rental boats in France and they had expanded to more than 300 boats by the mid-1980s. They had set-up in Saint-Jean-de-Losne in 1980 and I rented a canal boat from them in 1984 from their base in la Gare d’Eau. Blue Line is the small cluster of boats on the right side of the 1987 photo and the lines of floats in the bottom right of that photo are those of a newly established business named H2O. The 2012 photo shows the expansion of the marine facilities since then. 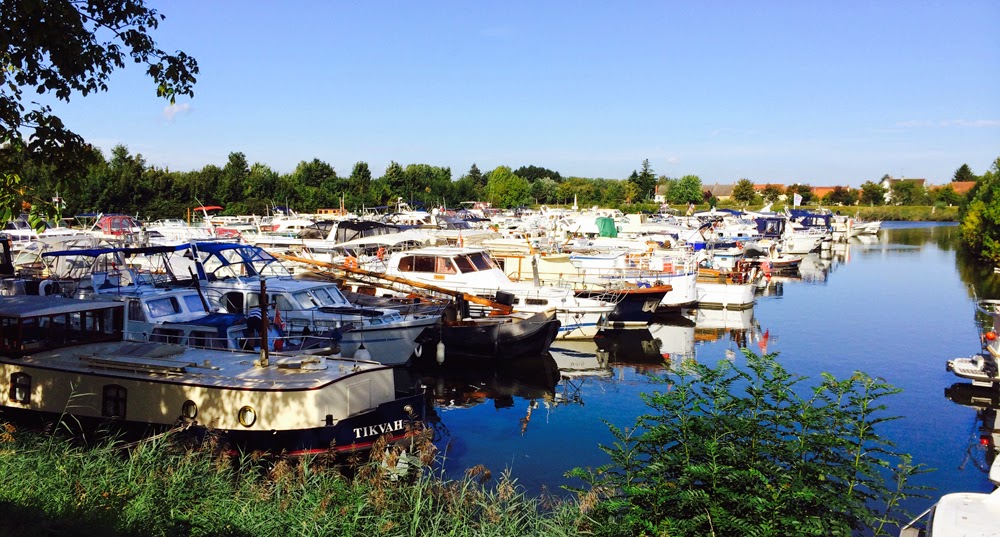 We had based our Dutch kruiser, Lady Jane in Saint-Jean-de-Losne in 2000, 01, 02 and 03 and again in 2005 and 06. Not only is it a great hub from which to explore the waterways, but it also has a dry dock, crane haul-out facilities and a marine railway. There are marine chandleries, a thriving community of marine trades and a strong boating atmosphere. 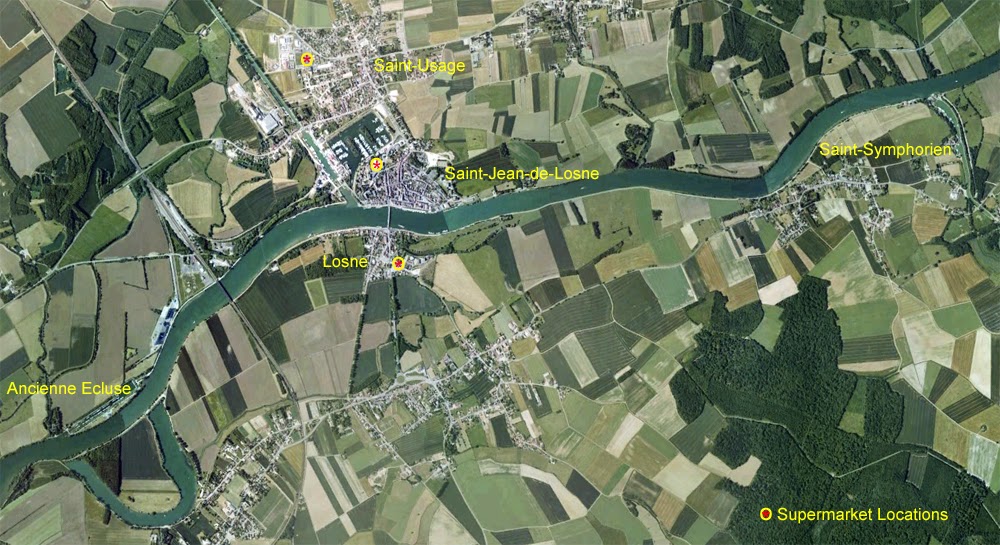 Two large marinas in le Gare d’eau, Blanquart and H2O offer moorage, both long-term and itinerant and there are three supermarkets within a kilometre of the basin. In addition, long-term moorage is available from H2O in l’Ancienne Écluse three kilometres downstream from town and from Bourgogne Marine between the final locks of canal du Rhône au Rhin four kilometres upstream at Saint-Symphorien. 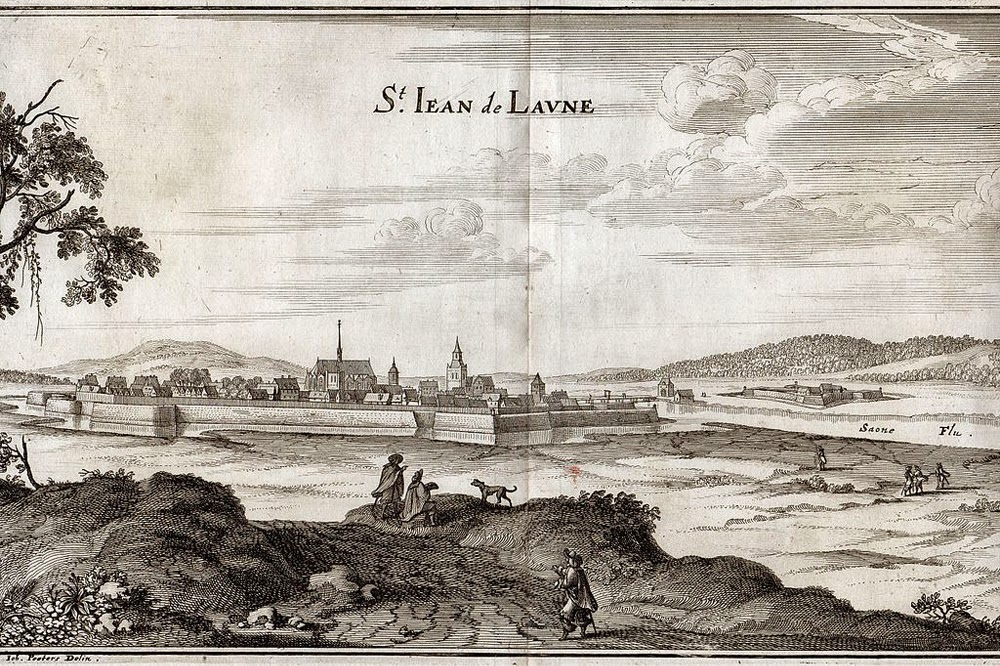 Saint-Jean-de-Losne dates back to at least 675 and it grew to prominence with its bridge across la Saône. Taxes and tolls from the crossing allowed it to fortify itself and it is famous for its defences. In 1636 the townspeople held-off the sieges of a much superior Austrian army that had already wiped-out most of the surrounding towns and villages. King Louis XIII rewarded the town’s courage by exempting taxes. During the Battle of France in 1814, the town again foiled the attacking Austrians, this time as they chased-down Napoleon. The townspeople crossed the bridge, and after attacking the Austrian camp, they retreated, destroying the bridge behind them. The following year, after Napoleon had returned from exile in Elba, he conferred la Légion d'honneur on the town. 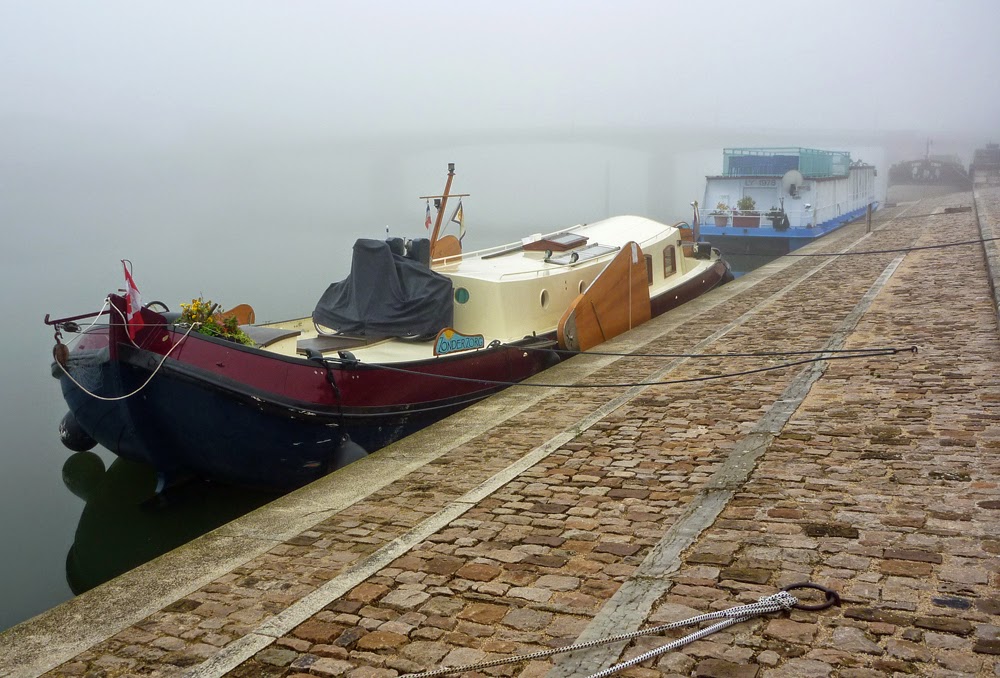 On Thursday morning we awoke to heavy fog, which hid the left bank of the Saône and nearly obscured the bridge. 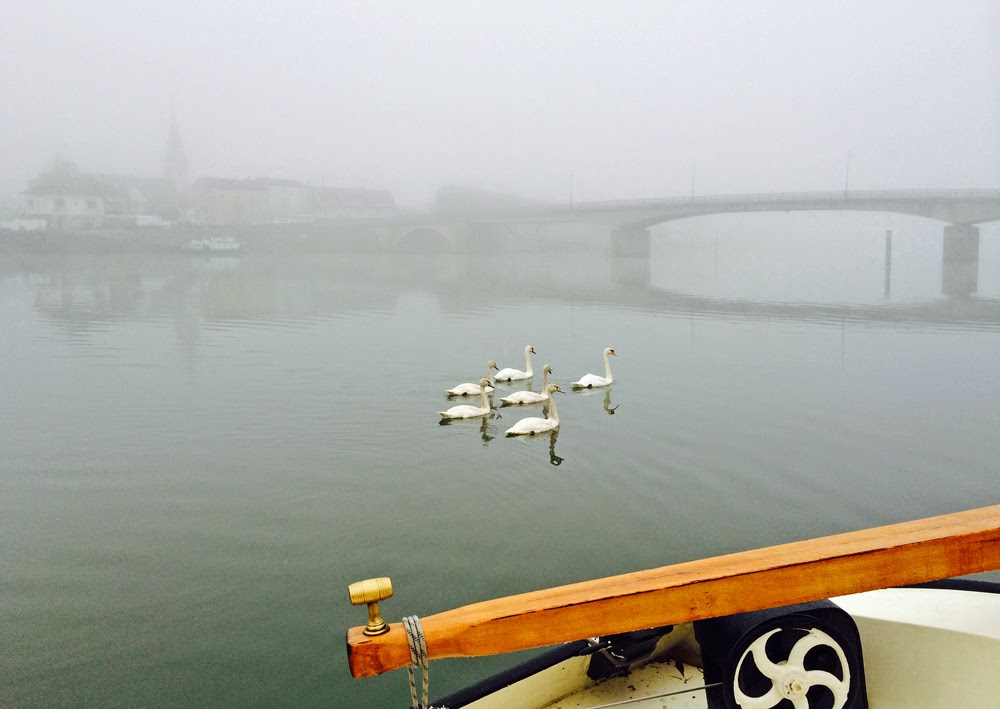 By the time we had finished breakfast the fog had begun lifting, the bridge gradually appeared and navigation was slowly resuming on the river. The bridge had been replaced after the Napoleonic wars, but was destroyed again by the Germans in September 1944 to cover their retreat eastward. 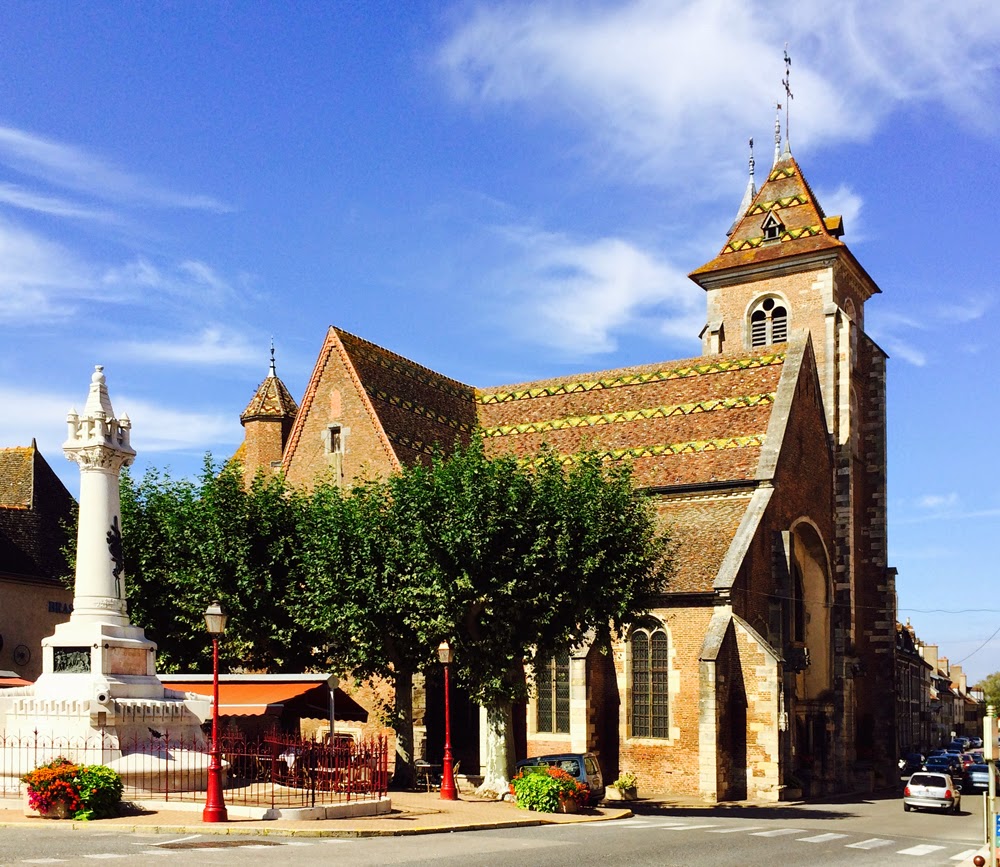 At the entrance to the bridge is a square, place de la Libération and in the centre of the square is a monument commemorating la Belle Defense de 1636. Bordering the square is Église Saint Jean Baptiste, begun in the fourteenth century, now nicely restored and maintained and resplendent under its classic Burgundian glazed tile roof. 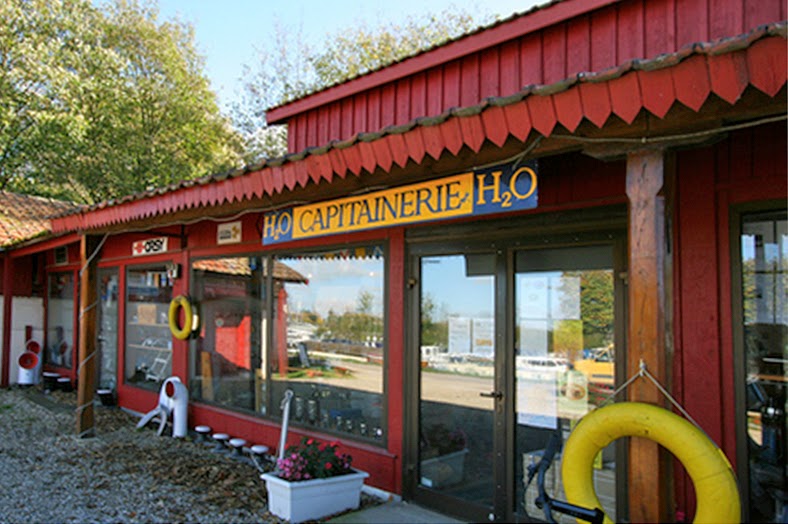 We walked through town to the offices of H2O to find out what moorage had been assigned to Zonder Zorg. Months before, while we were in the Midi I had emailed Charles, H2O’s founder and director to ask about winter moorage and had received a reply confirming a place for us in le Gare d’Eau. We arrived in the Capitainerie to find that we were not listed for moorage; Charles had apparently omitted to inform le Capitain. I tracked-down Charles, whom I first met in 1984 and had done brokerage, repair, maintenance and moorage business with him many times since. I found him overseeing excavation work for the footings of a new building. He seemed a bit flustered when I mentioned that le Capitain said there was no more space available to fit Zonder Zorg and that he knew nothing about my request for winter moorage. Charles countered with: “We have plenty of room for you at Port Royal”. 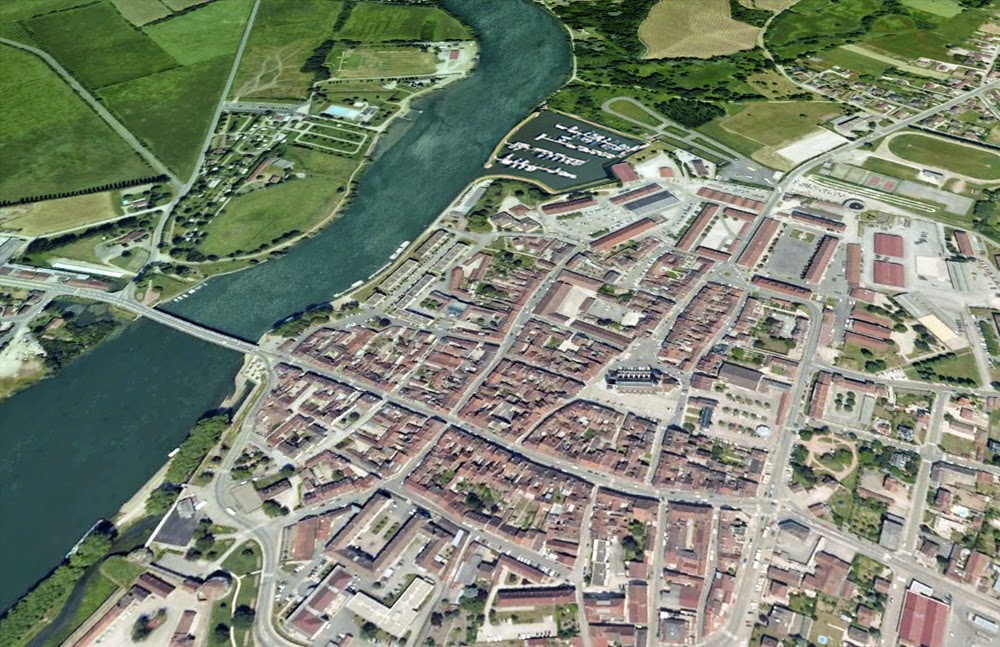 Port Royal is a new marina with 150 moorings that was created in 2011 by H2O in cooperation with the city of Auxonne, eighteen kilometres up la Saône from Saint-Jean-de-Losne. We had moored along the wall on the river at Auxonne many times over the past thirty years and had enjoyed the town. Last year on our way down la Saône we had moored in the port and were impressed with the location and the layout. Although I had my mind set on wintering in Saint-Jean-de-Losne, I told Charles that we would take the moorage in Port Royal and that we would head up to Auxonne after a few more days enjoying our spot on Quai National.
Posted by Zonder Zorg at 14:51