Further Up the Lot 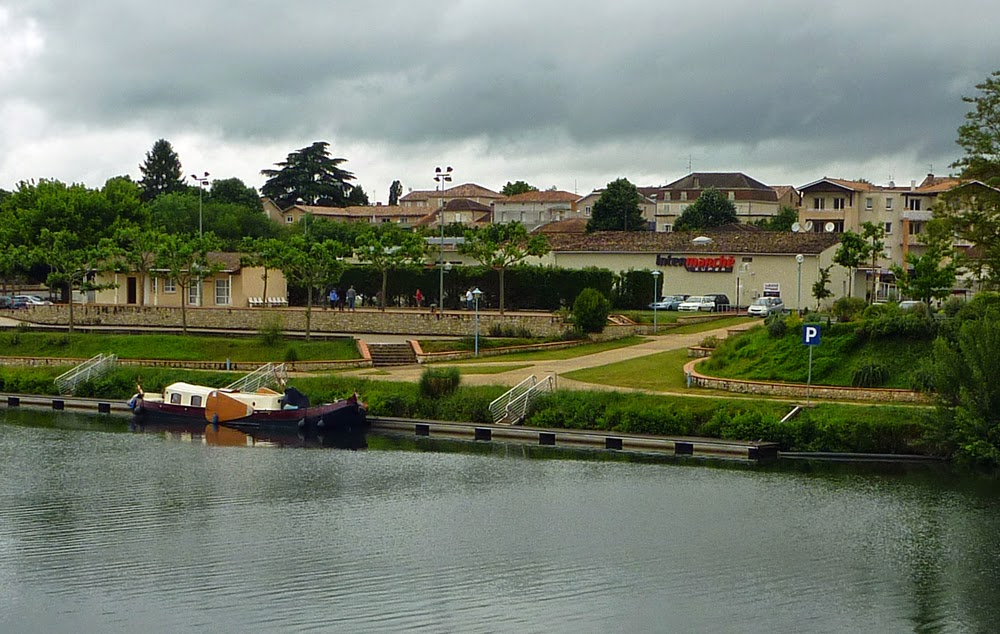 On Thursday 22 May we had secured on the floats in St-Sylvestre, fifty-nine kilometres up le Lot from la Garonne. L’éclusier at the last lock had told us that the next lock, nine kilometres upstream of St-Sylvestre was closed until Monday, so if we wanted to see the remainder of the navigable river, we had a four-day wait. About a hundred metres up the slope from the moorage is an Intermarché, just before it is a fuel station with diesel and a large selection of gaz tanks and across the street is a hardware store. An artisan bakery is half a block away and on a hilltop across the river is a medieval town to explore. 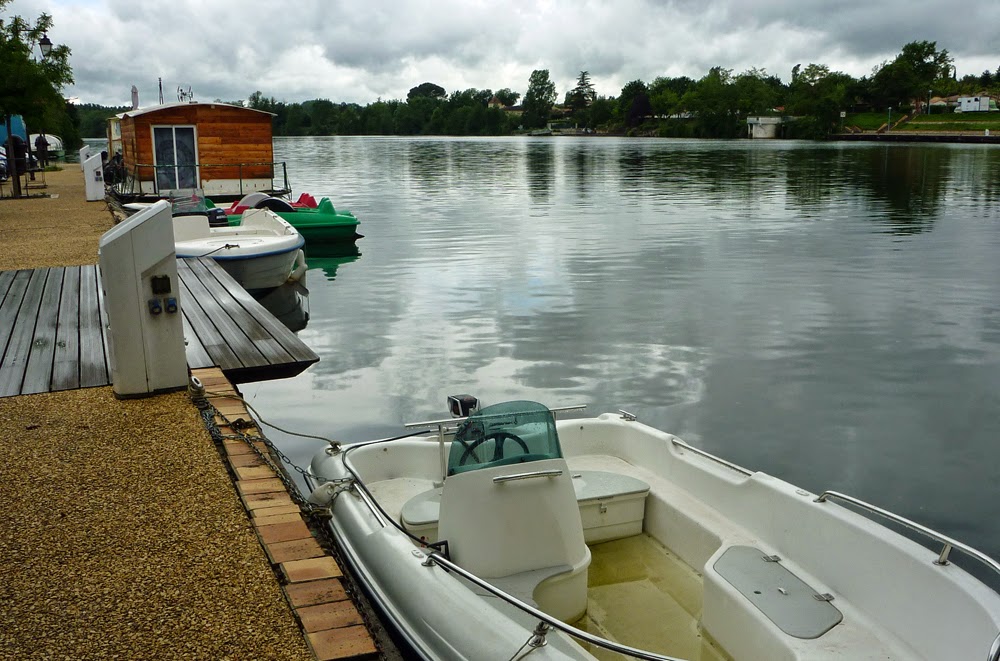 On the mooring floats are pylons with both water and electrical hook-ups, but they were deactivated. Across the river in Port de Penne is a marina, which according to the guide is managed by Babou Marine of Cahors. From our mooring it looked full, so we walked across the bridge to see if there was any space. The mooring spaces were all filled with small runabouts and a float home. On the door of la Capitainerie was a sign indicating it was closed except for a few hours on Saturdays and Sundays. There was water and electricity at the pylons. 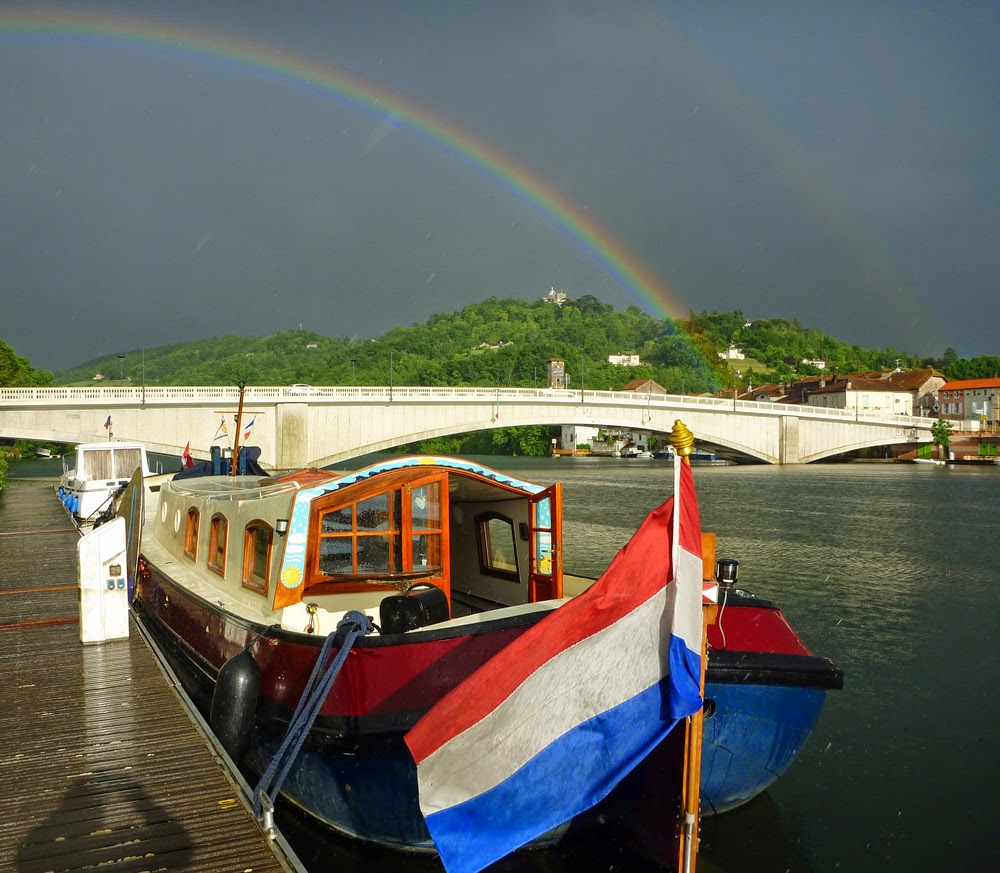 Friday continued our long spell of rain showers. In the early evening a series of thunderstorms rolled through and during one of them, as I was cooking dinner, our propane tank ran out. I got drenched changing to the spare, but we were rewarded by a small crack in the clouds that generated a double rainbow. 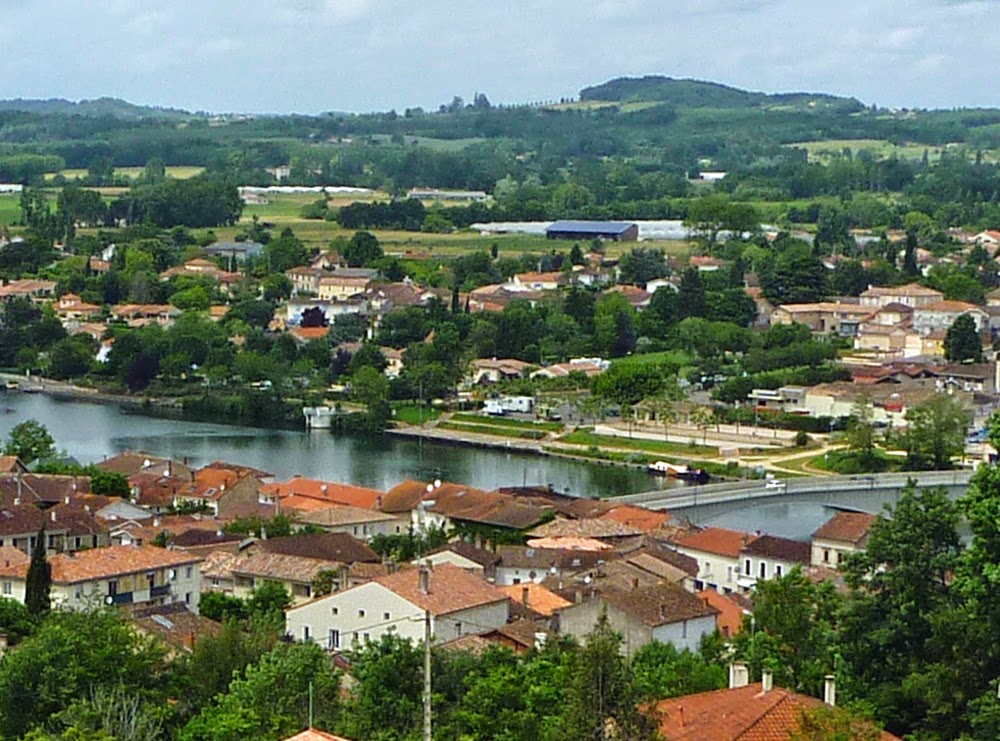 Late morning on Saturday we walked across to la Capitainerie to find out about getting some water. Le Capitain told us he would have the technician from the town come to our float to turn on the system and to collect the mooring fees for our stop. We told him we were heading up the hill to look at Penne d’Agenais and would be back aboard Zonder Zorg to meet him at 1500. We started the two-kilometre climb to the medieval ridge-top town. 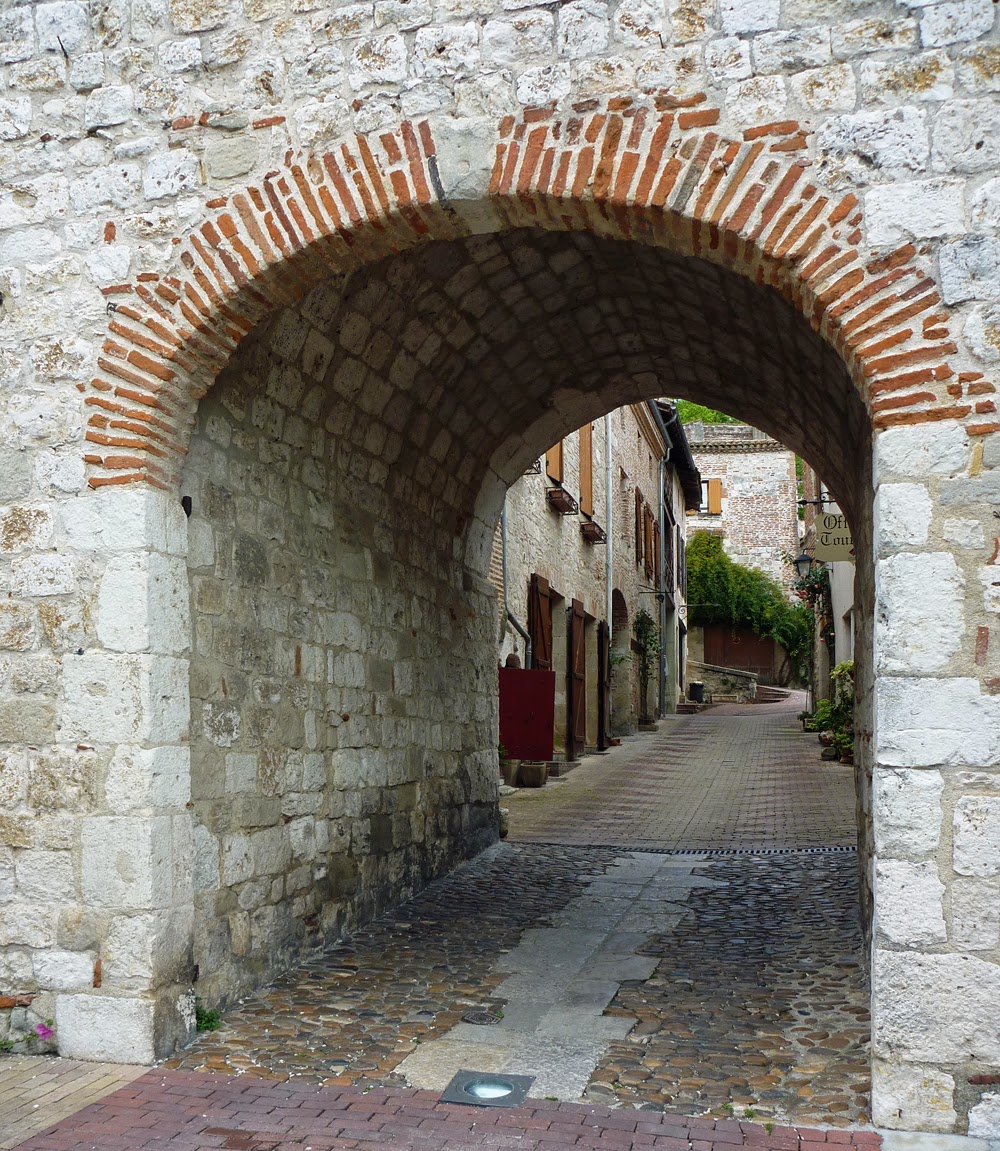 After a rather bland beginning to the town, we came to the lower gate, Porte de la Ville leading into the old quarter. 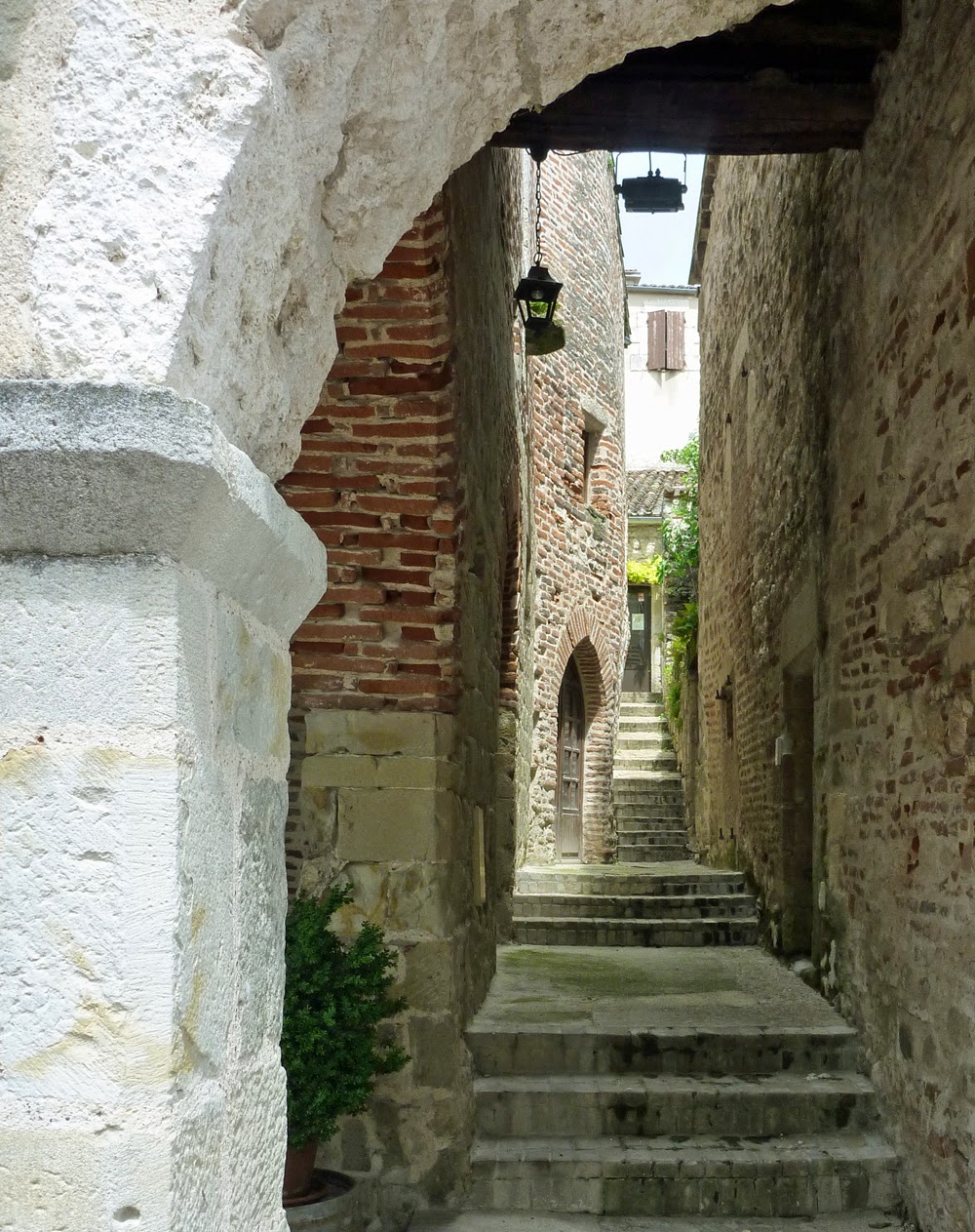 We wandered the narrow streets that wound their way up the steep hillside. Leading off these are many very narrow lanes, many with steps to make the climb easier. 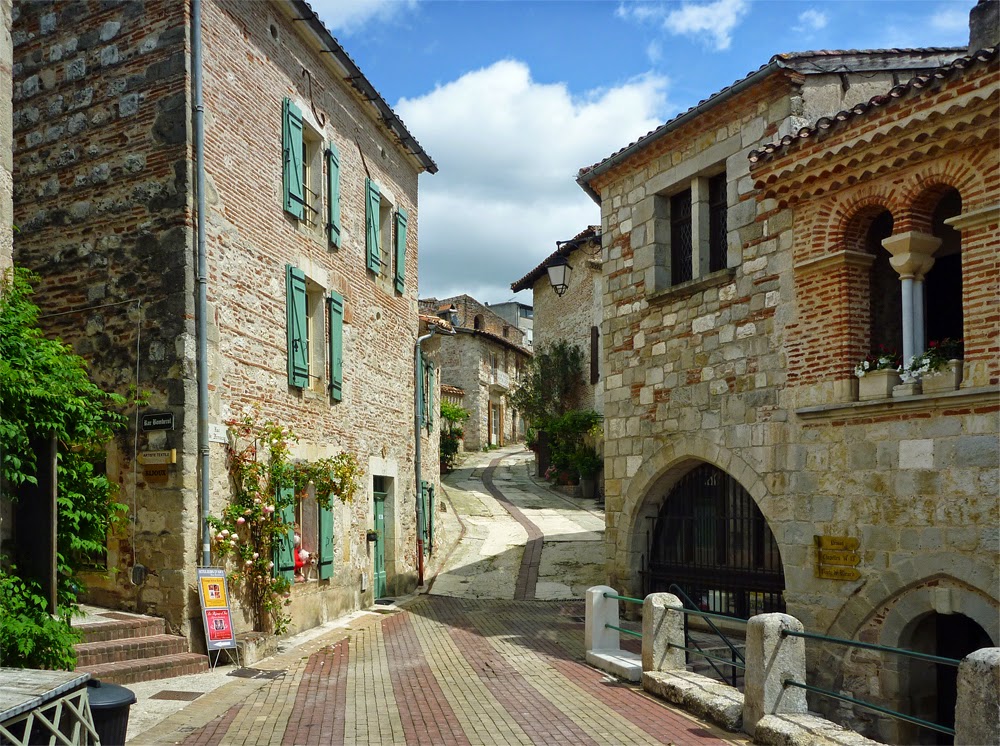 Although the town dates to the early thirteenth century, the buildings appear to be mostly seventeenth and eighteenth century and they are finely restored and maintained. 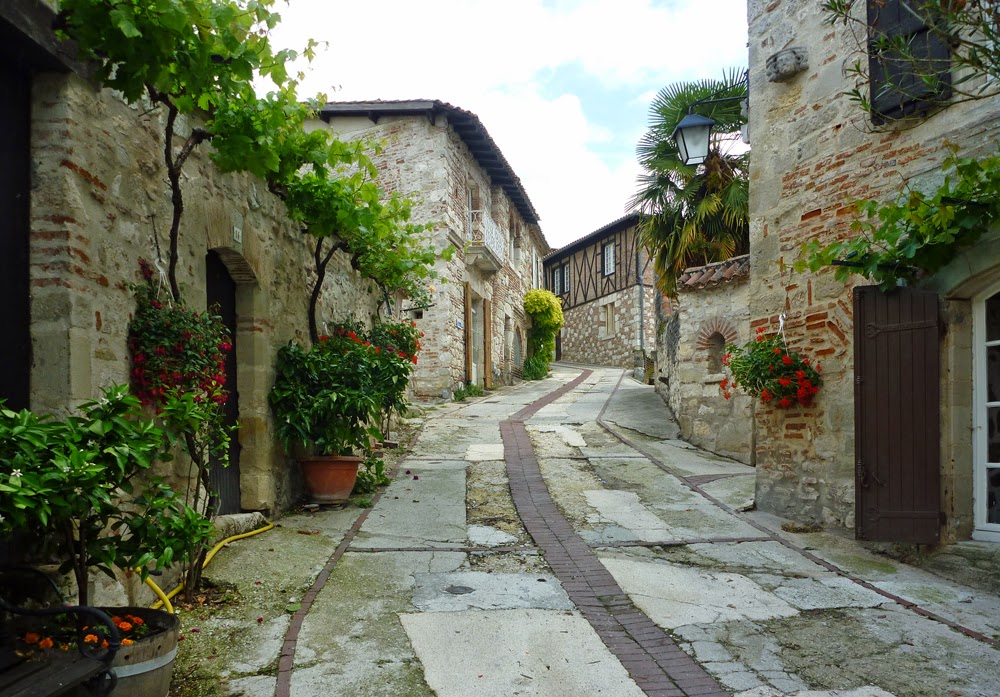 We continued to climb and wind our way up toward the top of the ridge past well cared for homes. 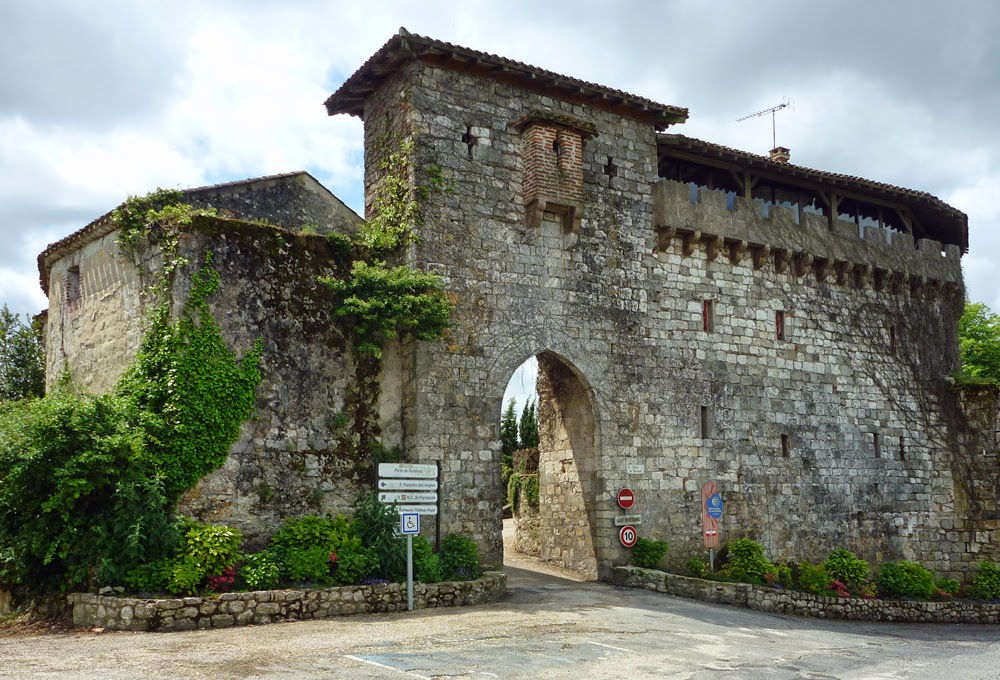 At the top we came the upper gate, Porte Ferracap, which looks both northward down over the river and southward down into the town. The view from the outside shows it to have been well fortified. 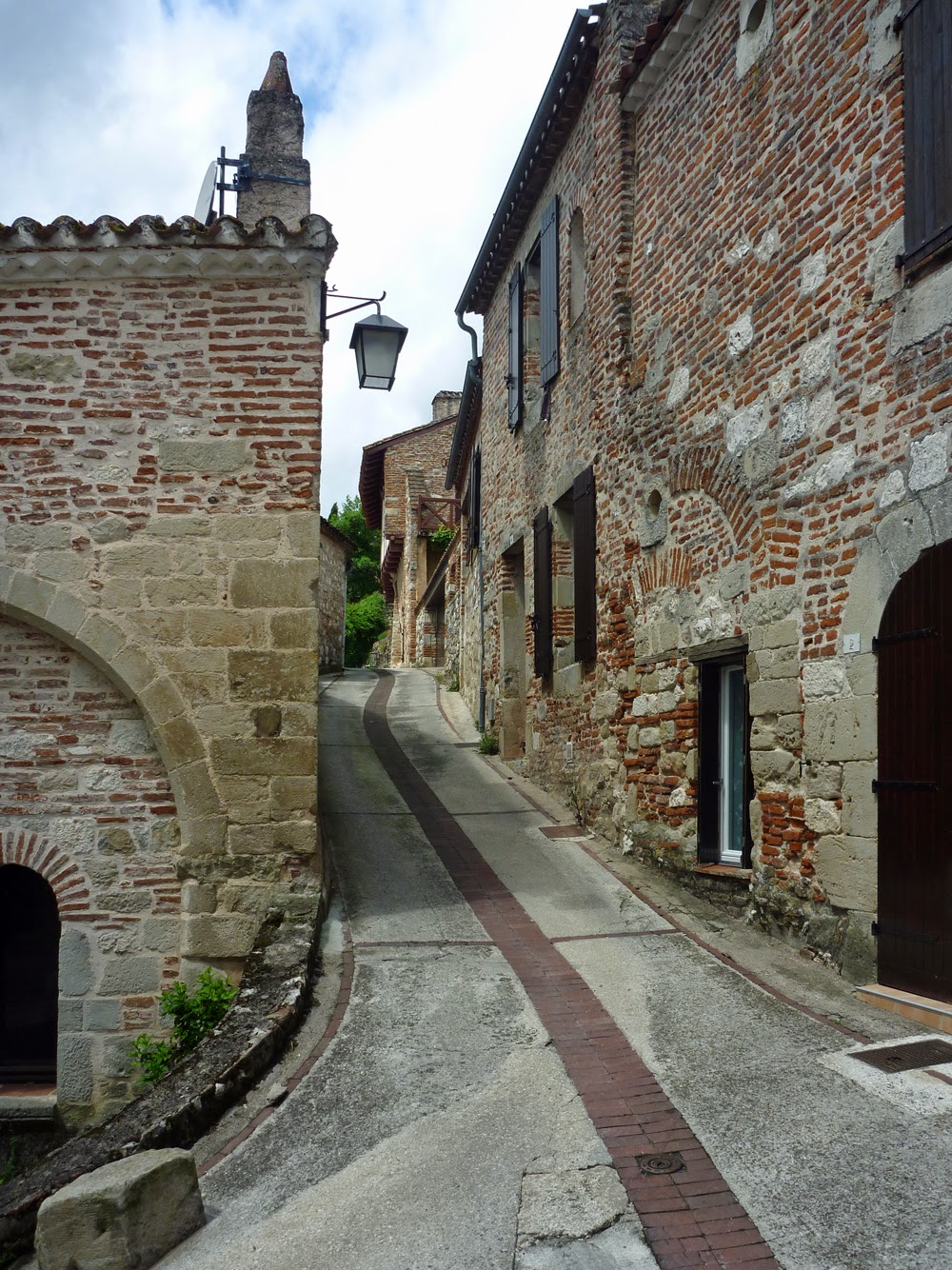 We passed back in through the gate and continued up the hill; we were heading to the silver-domed Sanctuary we had seen from the river. 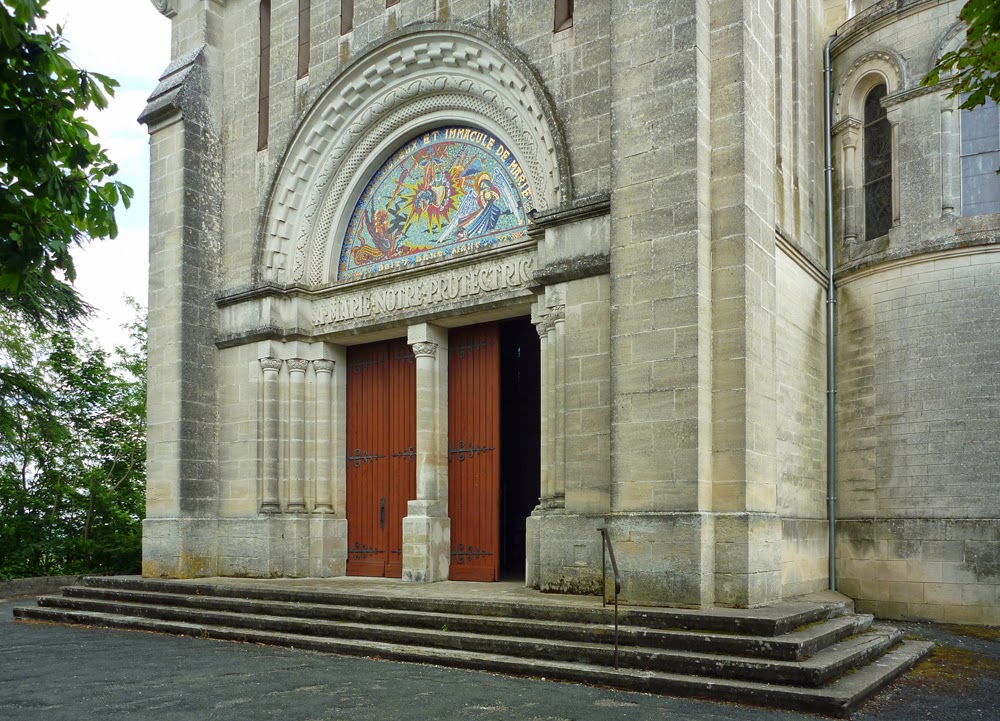 We arrived at the summit to find a comical hodgepodge of Romanesque, Byzantine and Belle Epoque architecture that seems a failed attempt to combine too many styles. Fortunately its exterior is difficult to view because of the surrounding trees and the steep drop-off on three sides. The fourth side, backs into rocky cliffs of a higher knoll to the east. 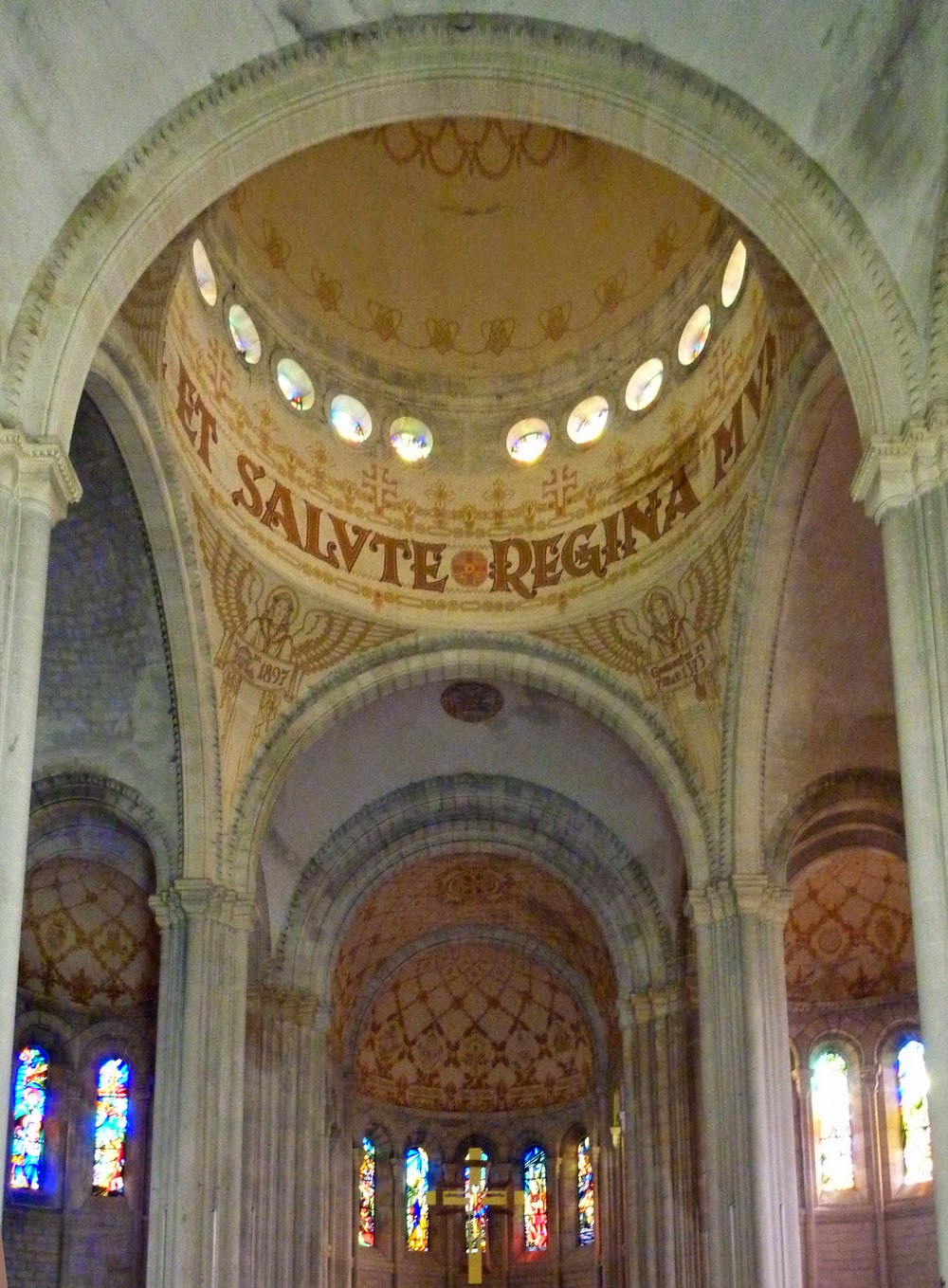 Construction on la Sanctuare Notre-Dame de Peyragude was begun in 1897 and according to the plaque inside, it was terminated in 1948. Whether the termination was upon completion is hard to determine. Also on the inside we learned that on this site sometime around the year 1000 a small chapel was built and it became a stop on the pilgrimage to Santiago de Compostela. The current Sanctuary is built on the ruins of a series of chapels destroyed during Hundred Years War, the War of Religion and the aftermath of the French Revolution. 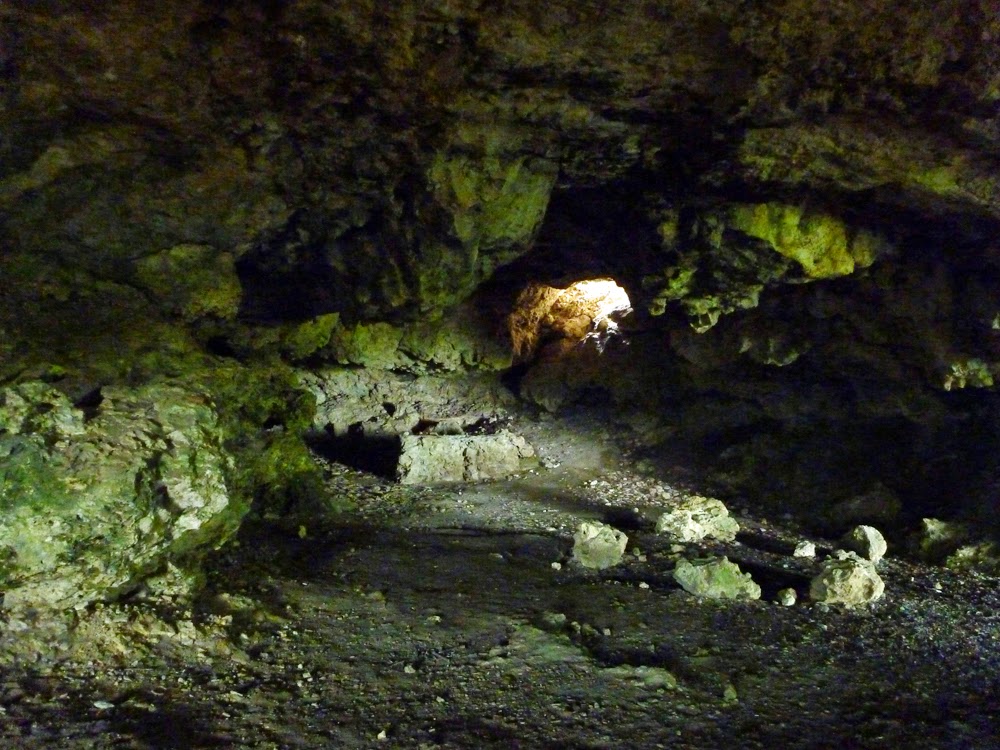 We followed a sign indicating ruins. The mud path led us last a cave entrance, so we went in for a look. We saw large rooms with three entrances, and there are likely more, but the place was unlit except from the entrances and we hadn’t brought our spelunking gear. There is no signage nor information available, but we later learned these had been occupied during Paleolithic times. 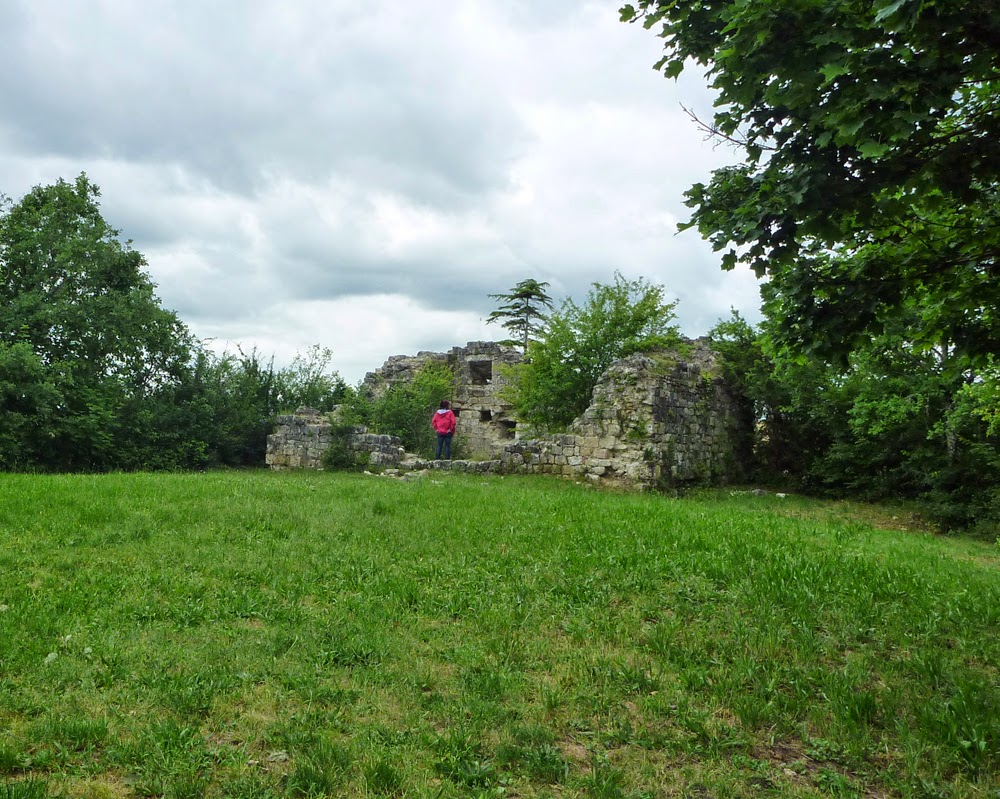 We followed the path as it wound up to the summit of the knoll, where across a short lawn we saw some ruins identified only as royal. The remaining walls were very thick, indicating a large or strongly fortified structure once grew from them. 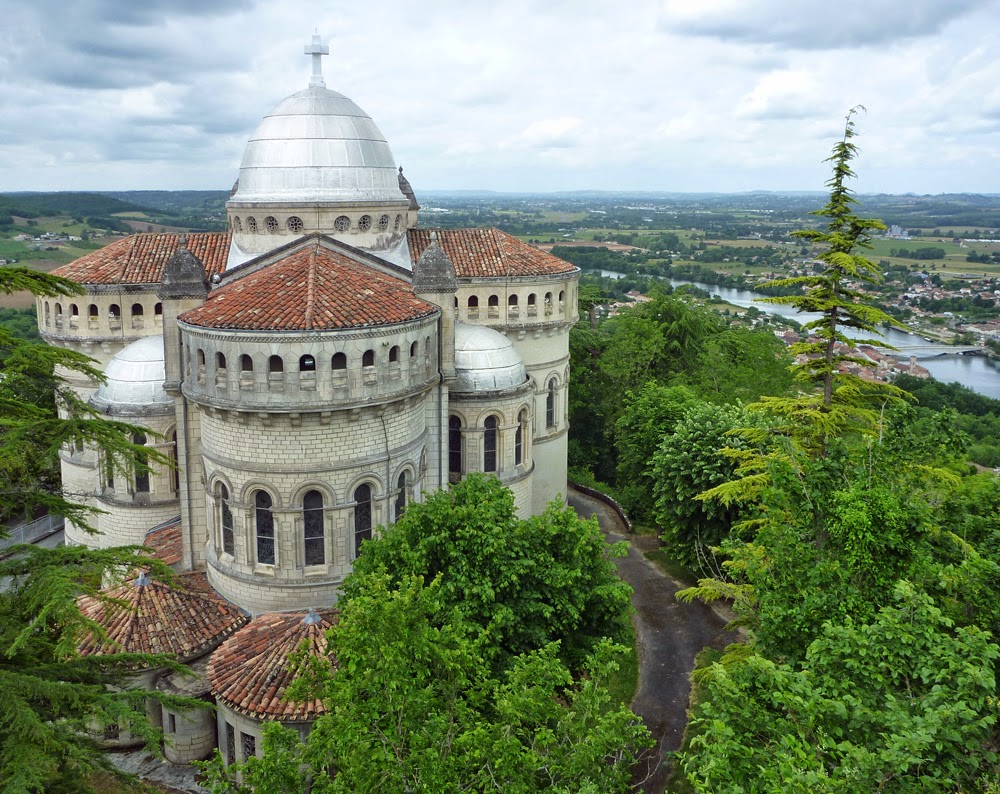 We climbed onto the south wall and scrambled along a sloping broken top to its apex at the corner with the west wall. We were looking down on roofs of the Sanctuary from which perspective it looked more Byzantine than anything. Below it in the distance we could see Zonder Zorg on the river. 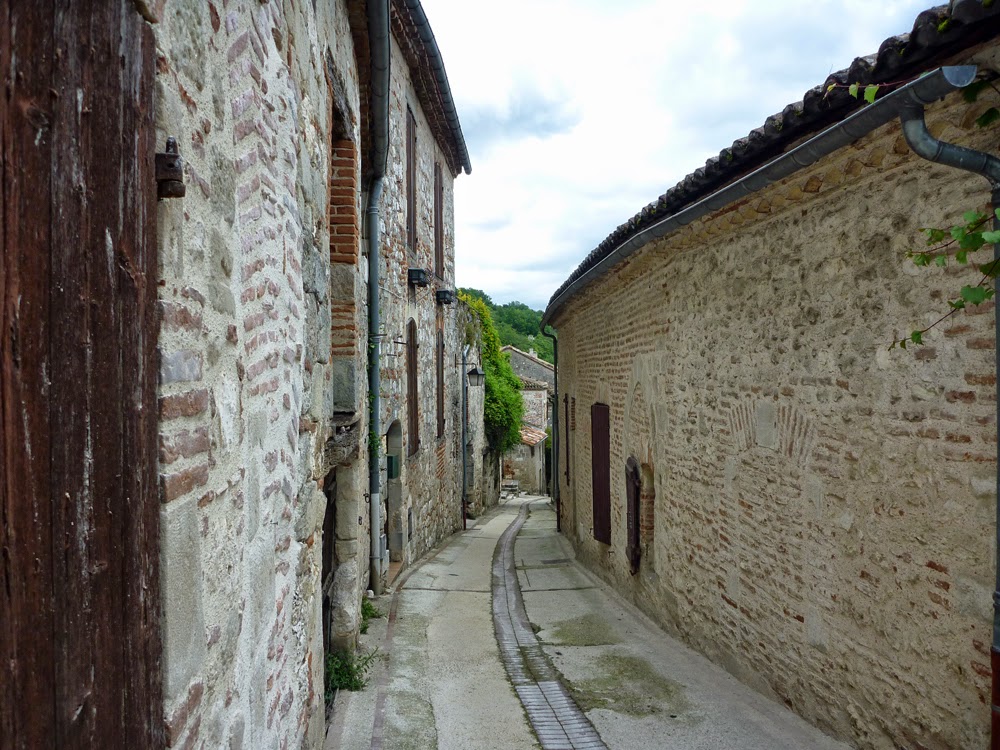 We climbed down from our exposed perch and followed a mud path that led back to the Sanctuary. Buried in a photocopied sheet about the Sanctuary was mention of the problem of the former chapels being frequently destroyed because they were so close to the castle built in 1182 by le Duc de Gascogne. A century and a half later, during the Hundred Years War, Penne was a frequent battleground as the English lost and regained the strategically positioned castle four times, each time the battles causing serious damage to the town and the chapel. As we walked back down the hill we ran our English history through our minds. The Duke of Gascony at the time the castle was built was Richard the Lionheart, the future King Richard I of England. His mother was Eleanor of Aquitaine and his father Henry Plantagenet, England’s King Henry II. That this information is obscured and the castle ruins are nearly unmarked, amazes us. We later refreshed our knowledge that Richard was also Duke of Normandy, Duke of Aquitaine, Count of Poitiers, Count of Anjou, Count of Maine, Count of Nantes, and Overlord of Brittany, thus having a control of a large portion of northern and western France. Yet he is almost ignored here by the French. 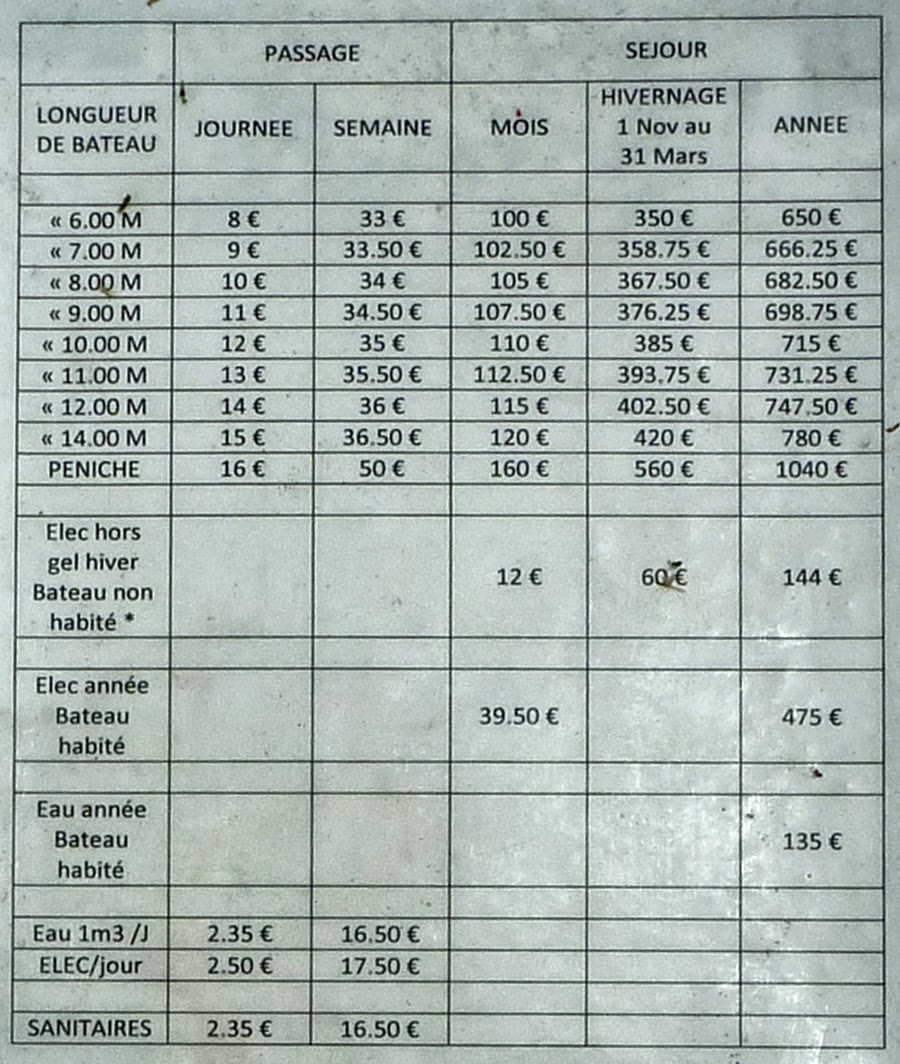 We were back down aboard Zonder Zorg by 1430, well in advance of the time when the technician was to come to switch on the water and electricity on the float. We waited aboard through the remainder of the afternoon and into the evening. We waited Sunday morning, then we walked across to la Capitainerie to find out what was happening, but found nobody there. I tested the water spigot to ensure there was water, walked back over and motored Zonder Zorg to a temporary mooring with her nose under the low bridge end and her beam poised on a corner of the stone wharf. We filled our water tanks, found a rate schedule, but could not find anyone around to take our payment. We slipped and continued up river. 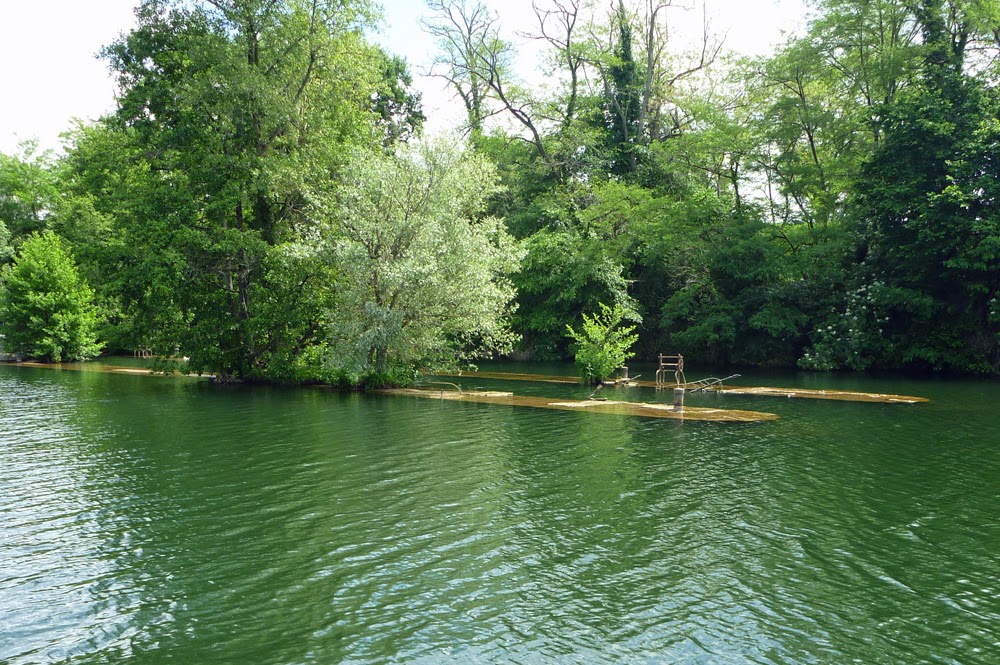 Four kilometres along we passed an old decommissioned lock, the top of which was just awash. The bollards and old iron hardware of the gates were still in place. The river was removed from the list of navigable waterways in 1926, so the last maintenance on this lock would have been more than eighty-eight years ago. 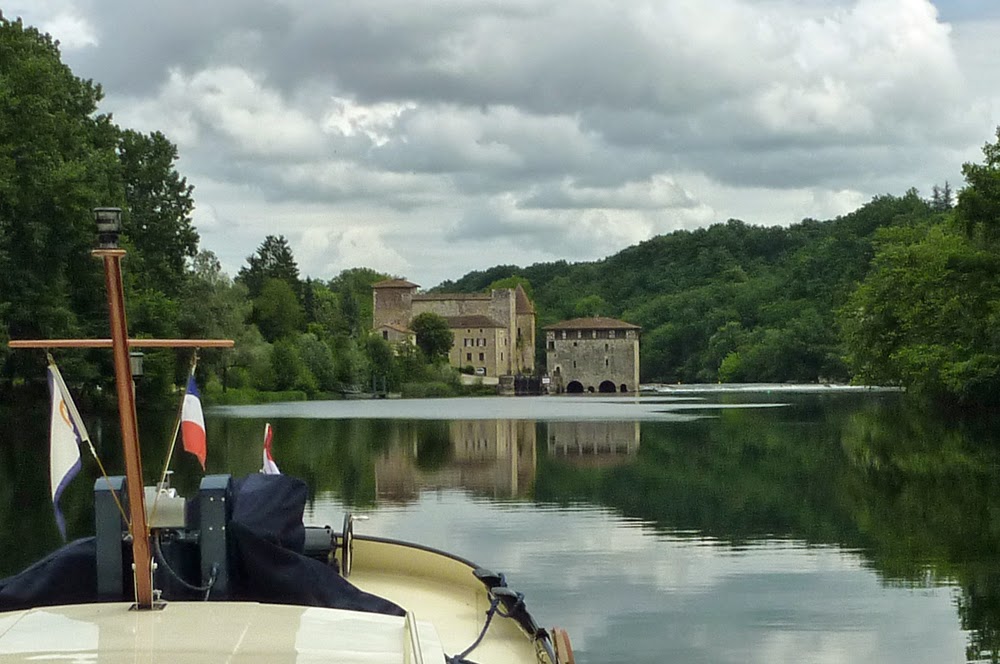 A further five kilometres brought us to Écluse Lustrac, which was closed until Monday morning. Shortly after 1600 we secured to the waiting float just downstream of the entrance to the lock. 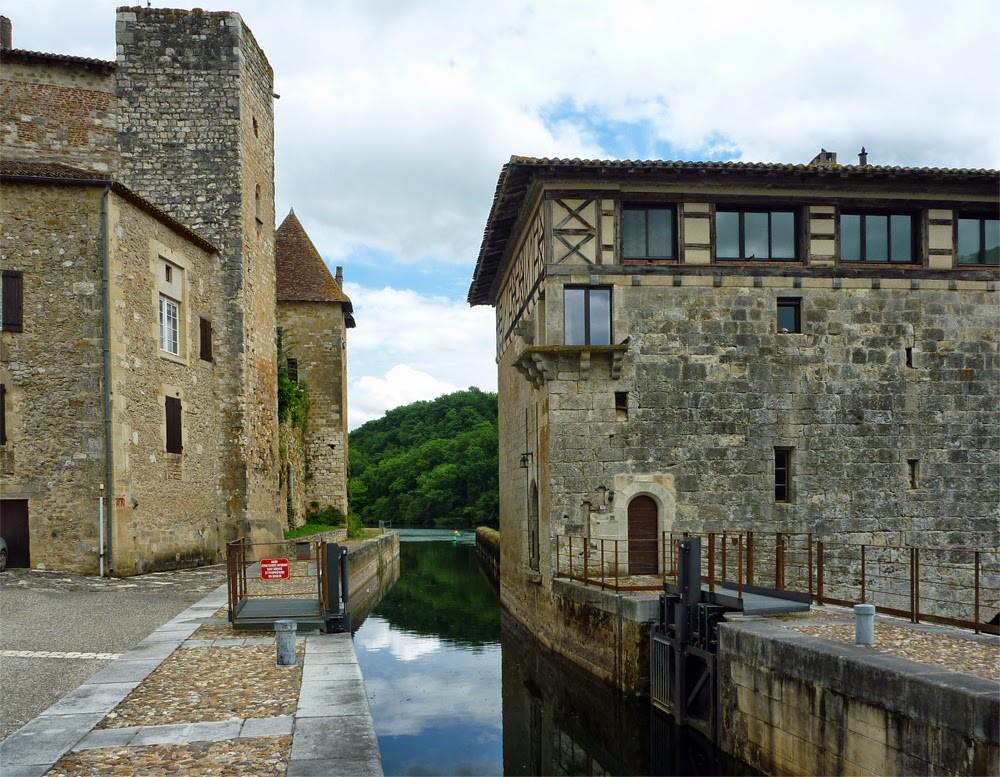 It is a very pretty setting, and we were delighted to see that the old mill buildings had been converted into residences. We walked up to the lock to see if there was any indication why the lock had been closed for four days, but could see no signs of work, recent, present or future. 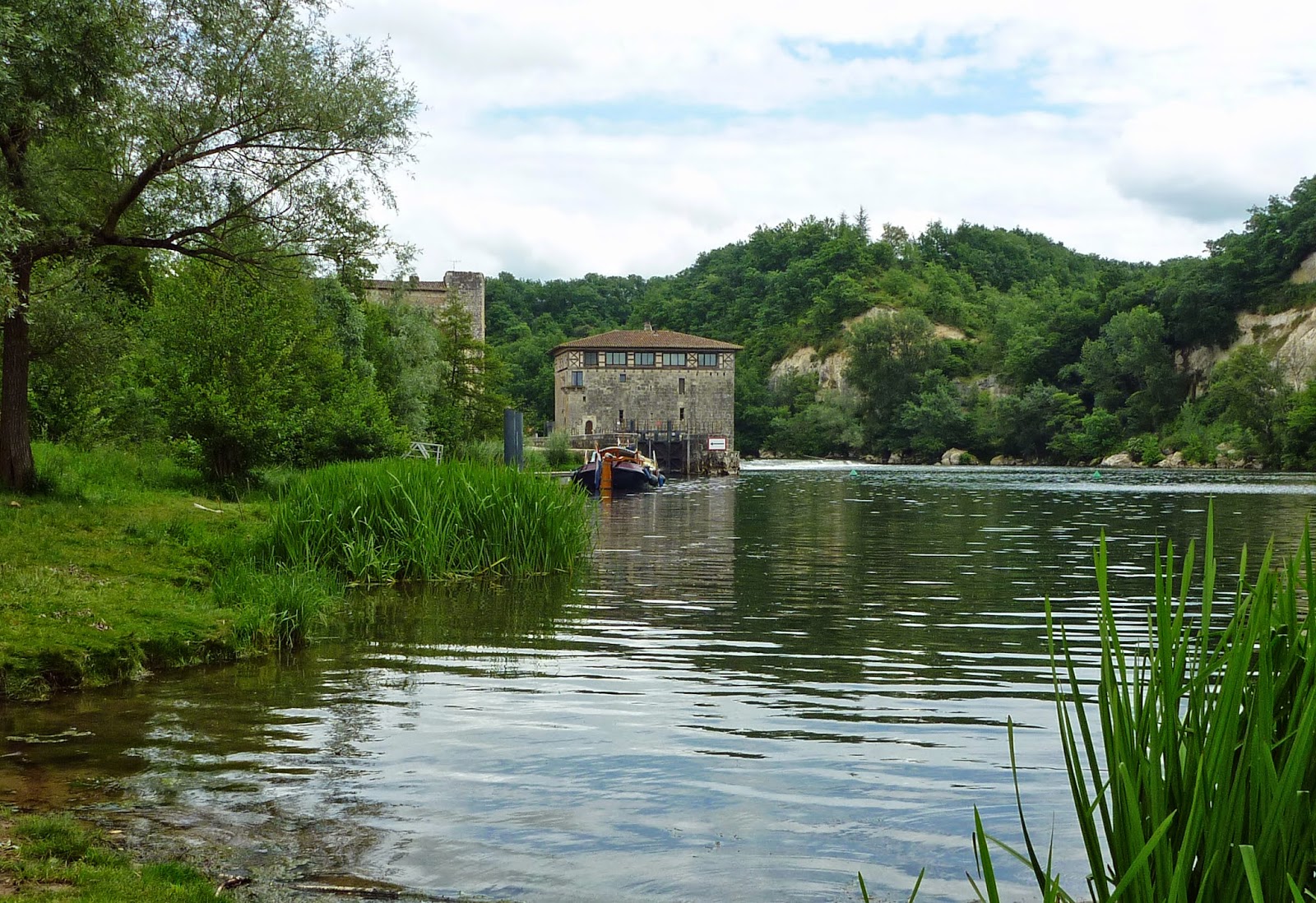 It rained heavily Sunday evening and overnight and it continued heavily on Monday, so we decided to remain on the float until the forecast clearing on Tuesday. 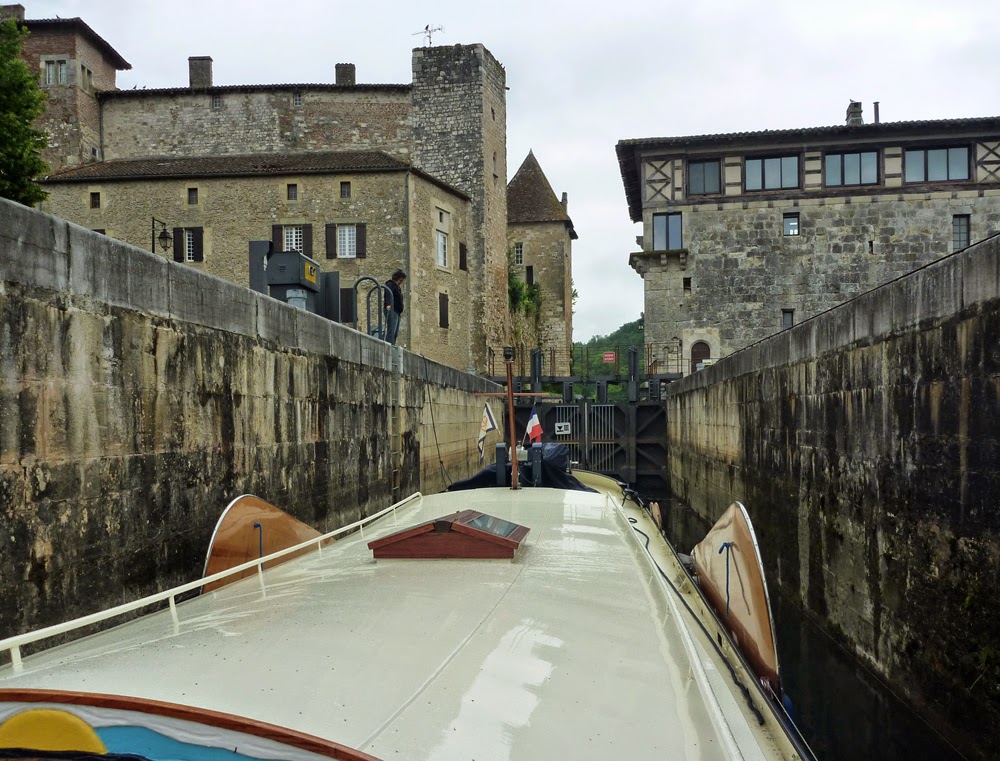 On Tuesday morning our card worked in the control slot and the lock prepared itself for us. 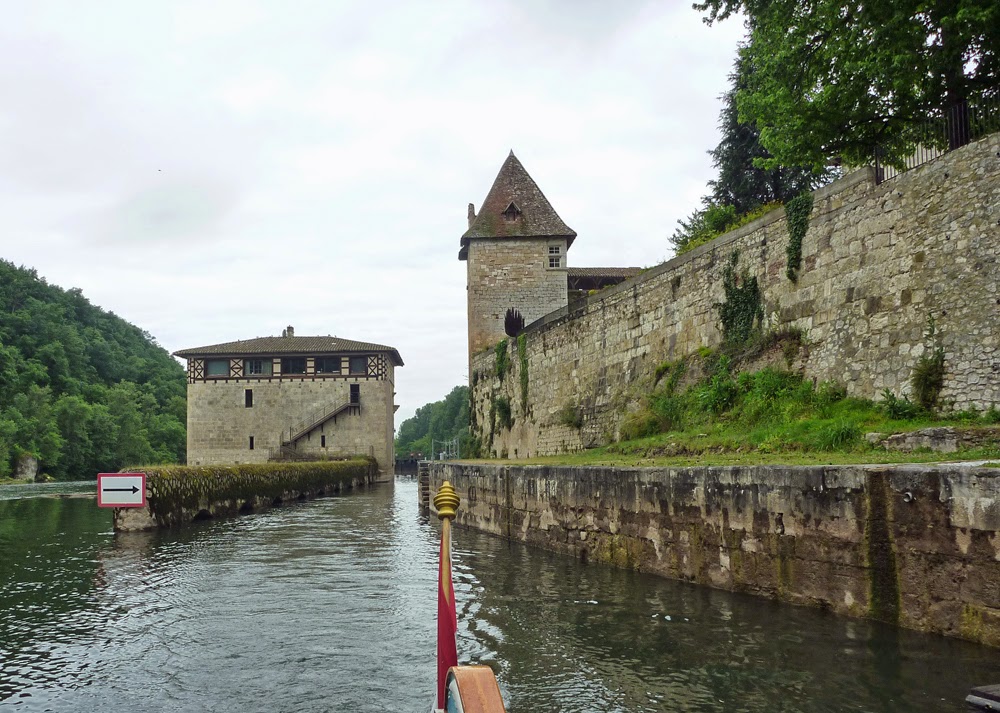 As we left the lock we found a fresh current in the river from the rains. 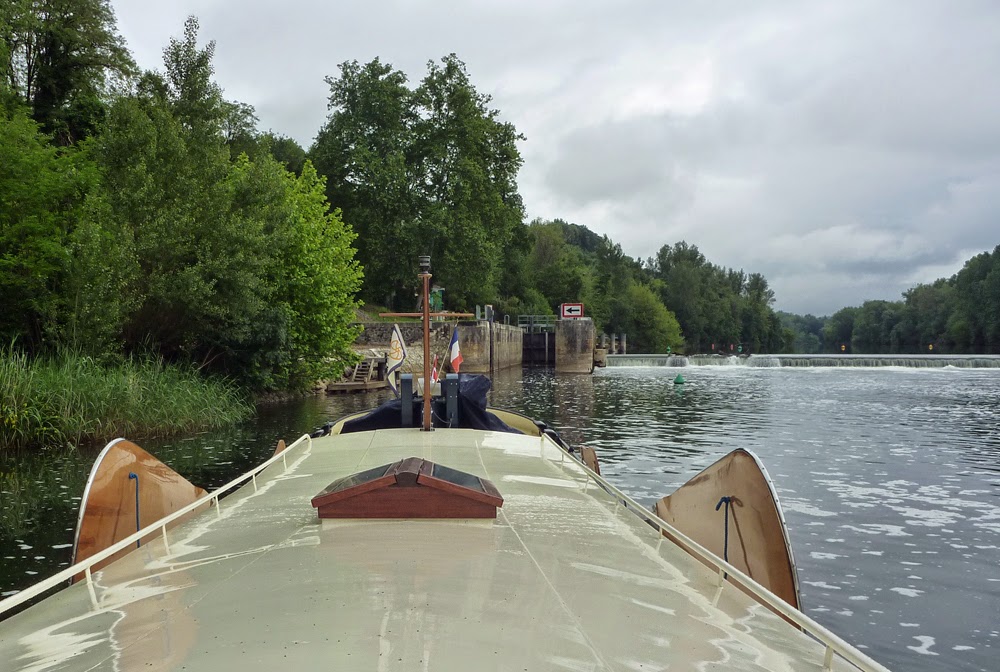 We continued along for three kilometres to Écluse Ondes, the last lock on the navigable section of the lower Lot. 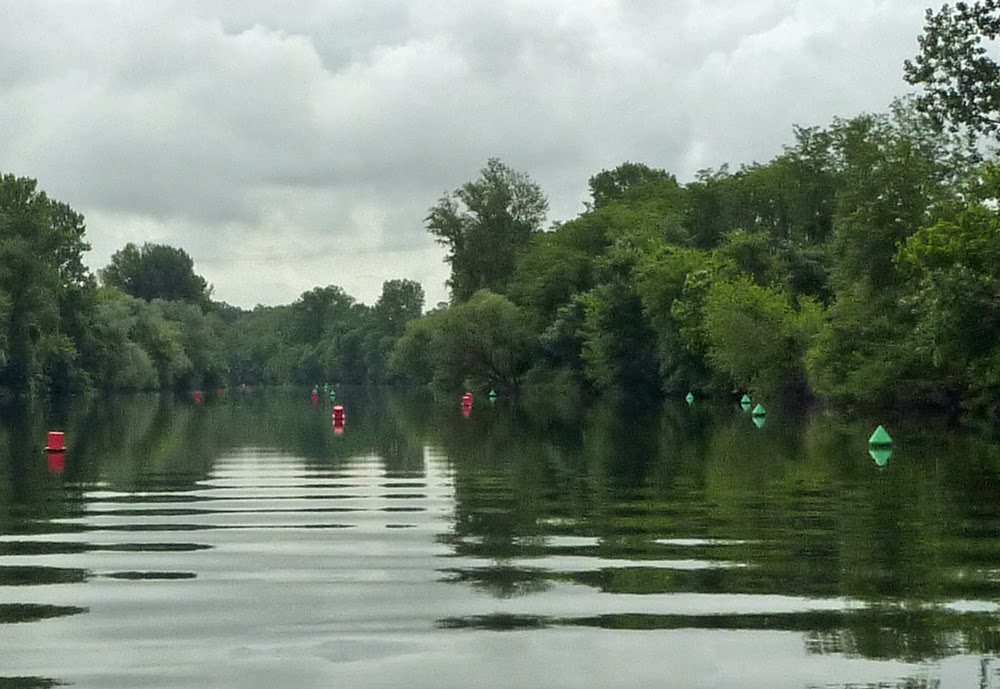 Two kilometres beyond the lock begins a 1.5 kilometre buoyed channel which was cut through solid rock in 2010 to the Saint-Vite weir, the current end of navigation. The guide says: “Do not move away from the centre as the rocks are sharp. On arriving at Saint-Vite, beware of the cross currents generated by the weir.” I looked at the narrow buoyed channel winding up the river then out of sight around the bend; it appeared to be narrower than Zonder Zorg’s length. With the current and the unknown eddies at the weir, turning around any further upstream would be risky. My mariner’s prudence caused us to forgo the final fifteen hundred metres of the navigation. We turned and started back down.
Posted by Zonder Zorg at 13:23