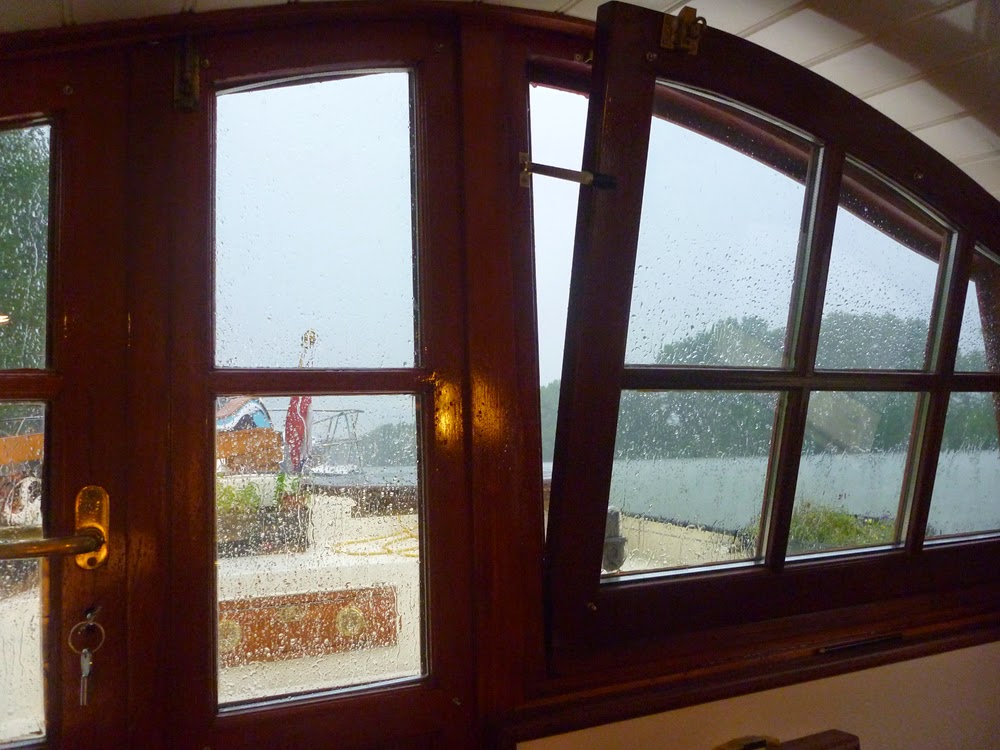 All of France had shut down on Thursday, 29 May as we celebrated Edi’s birthday. Not only were all the shops closed, but also taking the day off were the operators of the lock that would take us down to la Garonne, the pilots that would guide us up the river and the operators of the lock out of la Garonne and into la Baïse. While we waited and celebrated, it rained and the river rose. On Wednesday afternoon we had organized to do the transit to la Baïse at 1000 on Friday, when the lock operators and pilots weren’t joining the many in France taking the day off to bridge to the weekend. 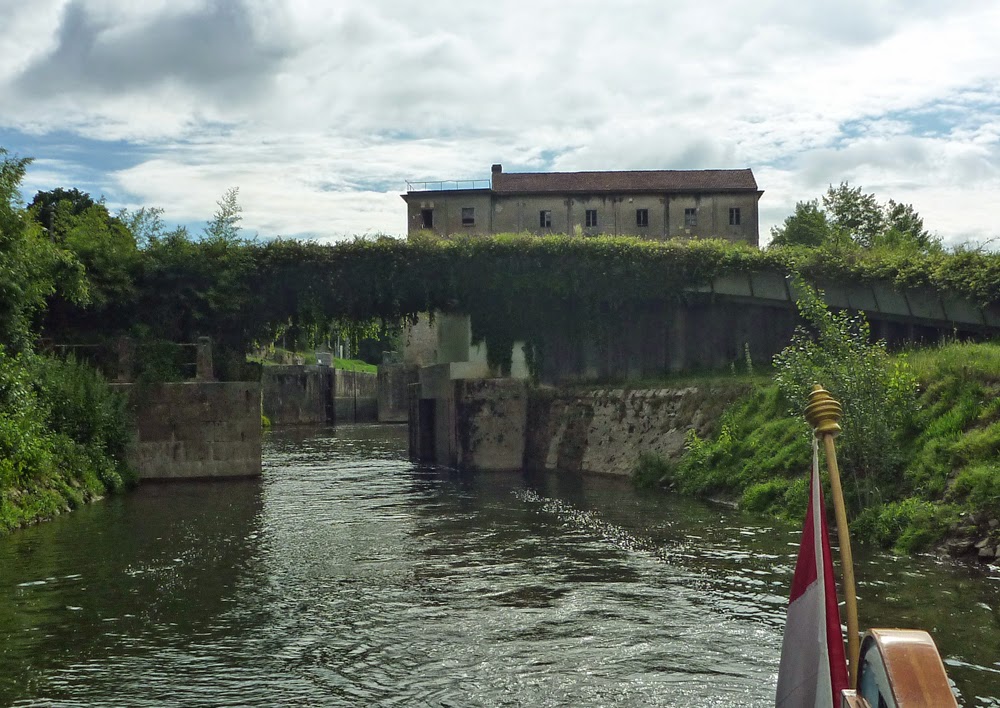 We were just beginning our first cup of espresso on Friday morning when there was a knock on the hull. The pilots told us la Garonne was rising rapidly and is being closed to navigation. They could take us through if we left immediately. We quickly dressed and headed down through Écluse Aiguillon. 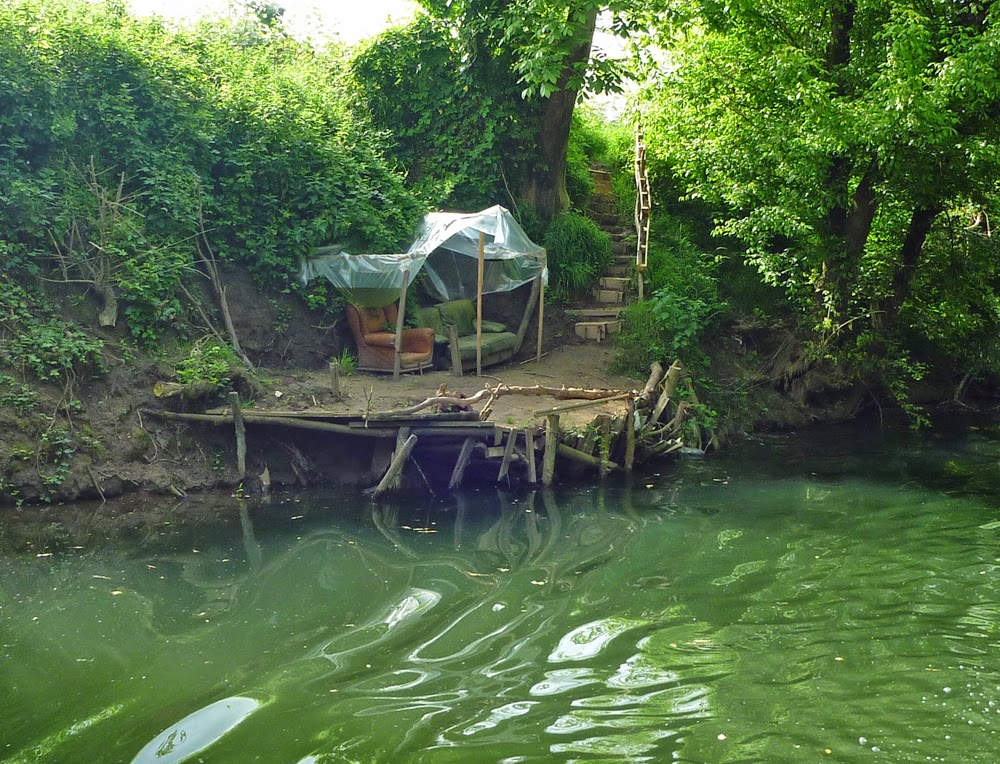 We followed the narrow winding canal that bypasses the final rapids on le Lot, passing along the way an interesting assortment of fishing spots. 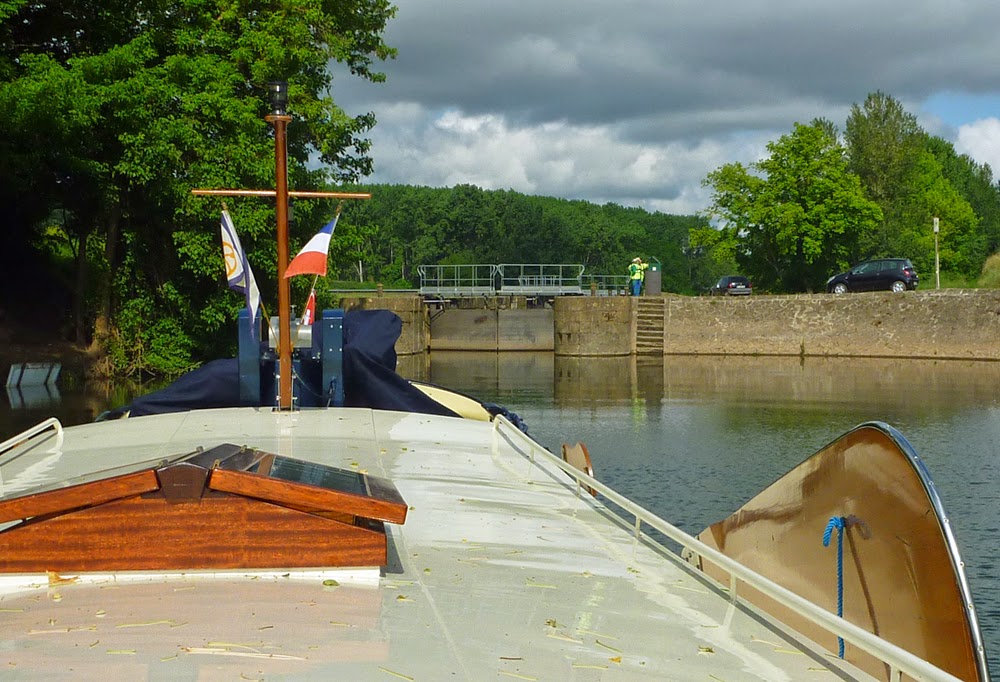 With all the urgency that had been expressed by the pilots, we were surprised to see that the lock had not been prepared for our arrival. We sat in the approaches for nearly a quarter hour as the lock chamber was slowly filled. 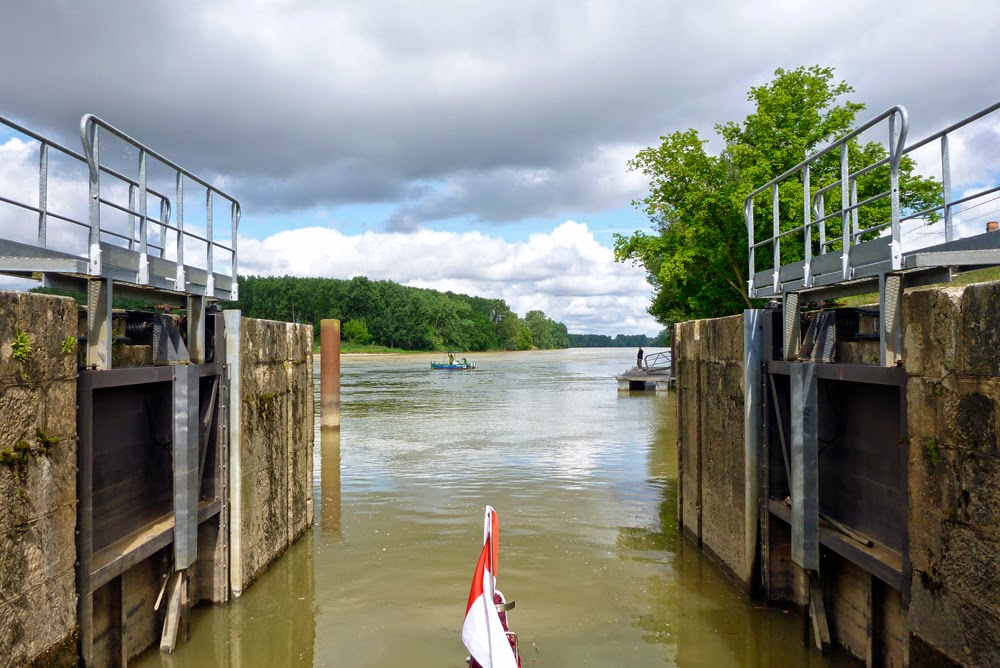 Our first glimpse of la Garonne through the opening gates showed a swirl of turbulence near the exit from the lock, and beyond that the river was moving rather uniformly past. When the pilot came aboard, he said the river was running about twelve kilometres per hour with a swifter section through le Passage de Monluc. Zonder Zorg’s theoretical hull speed is 17.5 kilometres per hour and I doubt that her 64 kilowatts of power could get her much past 17. This meant that at full power, the 4.8 kilometre passage up to the entrance to la Baïse could take an hour or more. 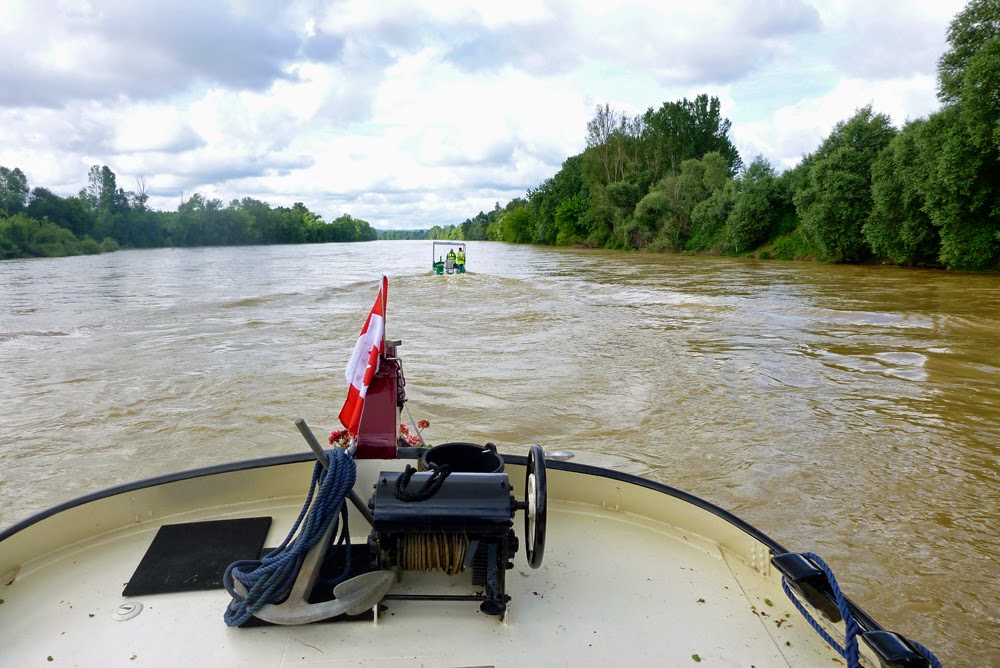 We headed out into the river and turned upstream to follow the pilot boat through the chocolate-brown water. 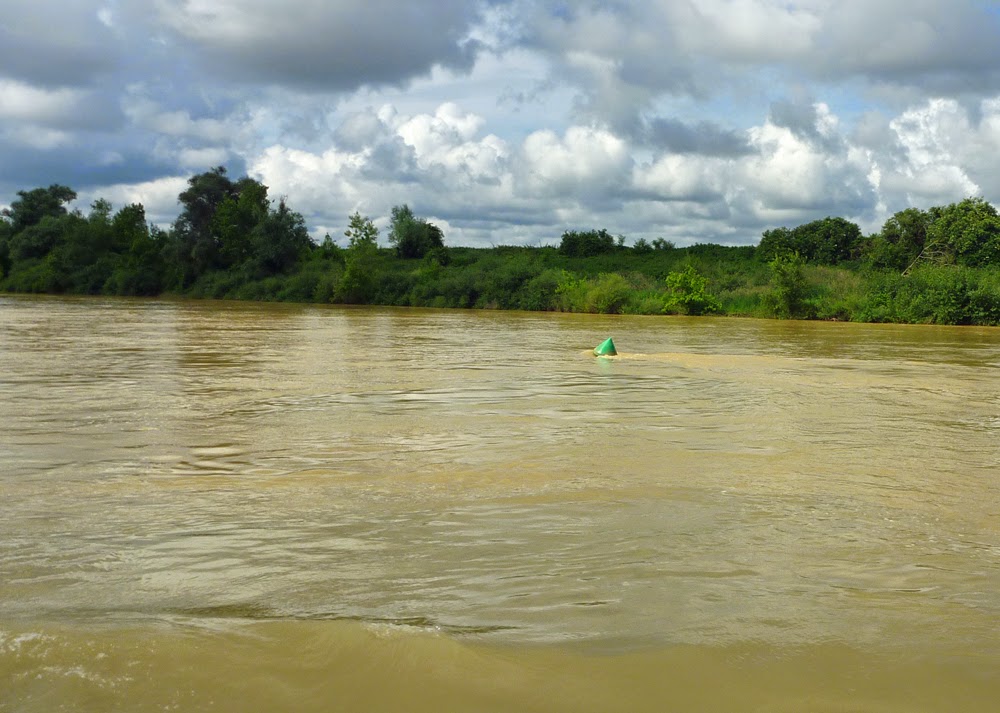 At 2500 rpm we were making a big wake in the water, but the river bank seemed to be barely moving past. We ground past buoys tugging at their mooring chains and in le Passage de Monluc, they seemed to pause beside us as we worked over the ledges. 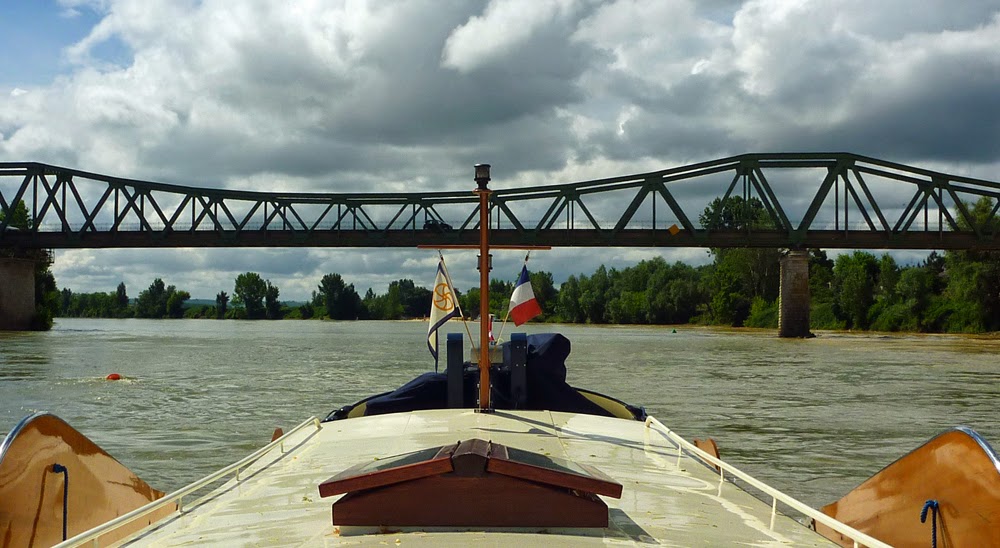 We watched as Pont St-Léger slowly grew and we finally reached the turbulent “lee” at the entrance to la Baïse at Écluse St-Léger. It had taken us an hour and eleven minutes; we had averaged 4.06 kilometres per hour at 2500 rpm. We could see much of the brown in the river was coming from la Baïse. 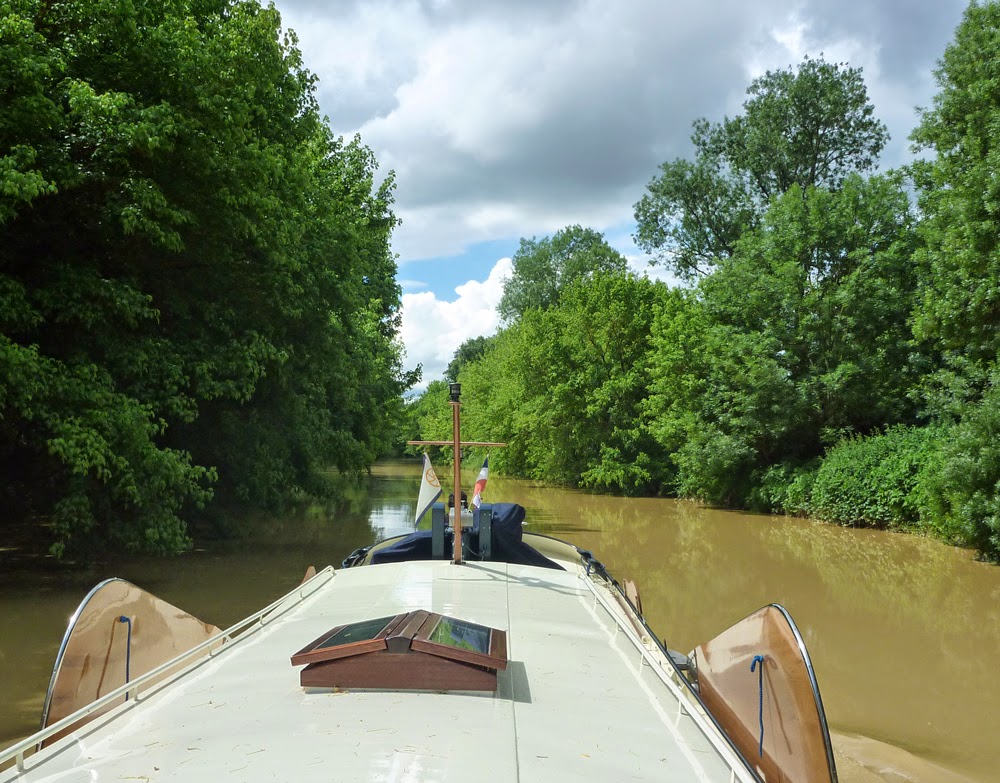 We locked through into la Baïse and started up a more placid river. The water here was even more muddy than in la Garonne, indicating a heavy runoff upstream. The placidity of the river gradually changed as we approached Écluse Buzet, four and a half kilometres upstream. During the last kilometre before the lock we ran through increasing foam and turbulence and as we approached the weir we saw water flowing high over it. The wall beneath the weir that separates the spillway current from the lock entrance was nearly awash. 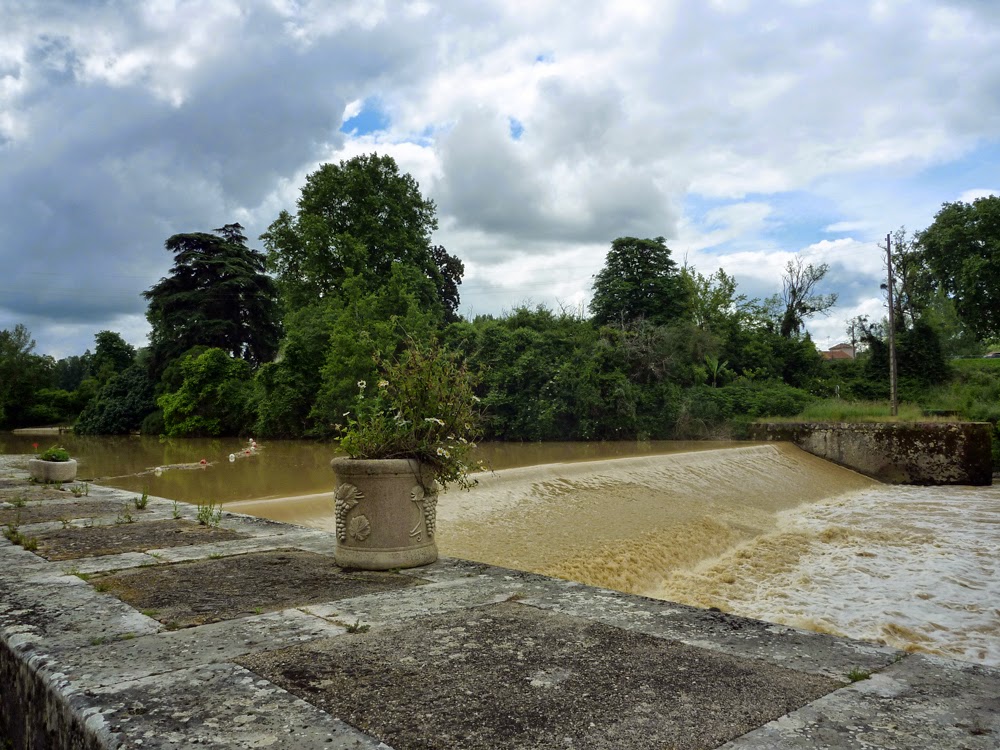 From the top of the lock chamber we had a good look at the turbulence and the source of the foam through which we had been motoring. 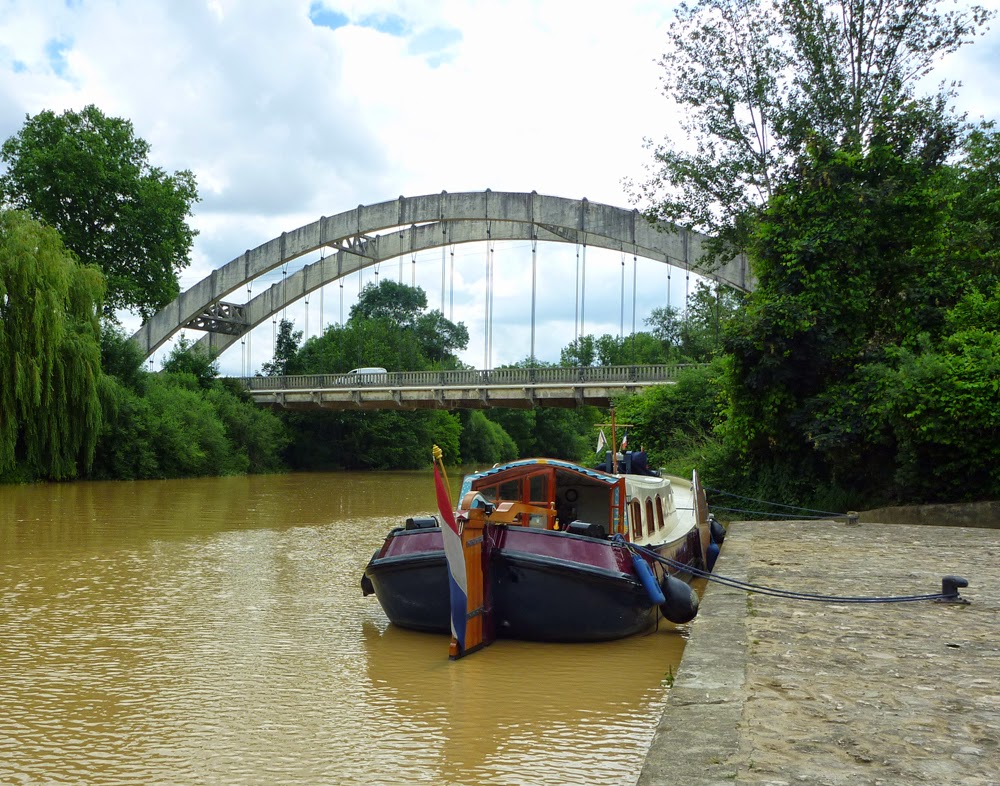 At 1240 we paused on the stone quai a short distance upstream of the weir, just below Pont de Buzet. We were hungry, having had our breakfast plans cancelled by the early arrival of the pilots. 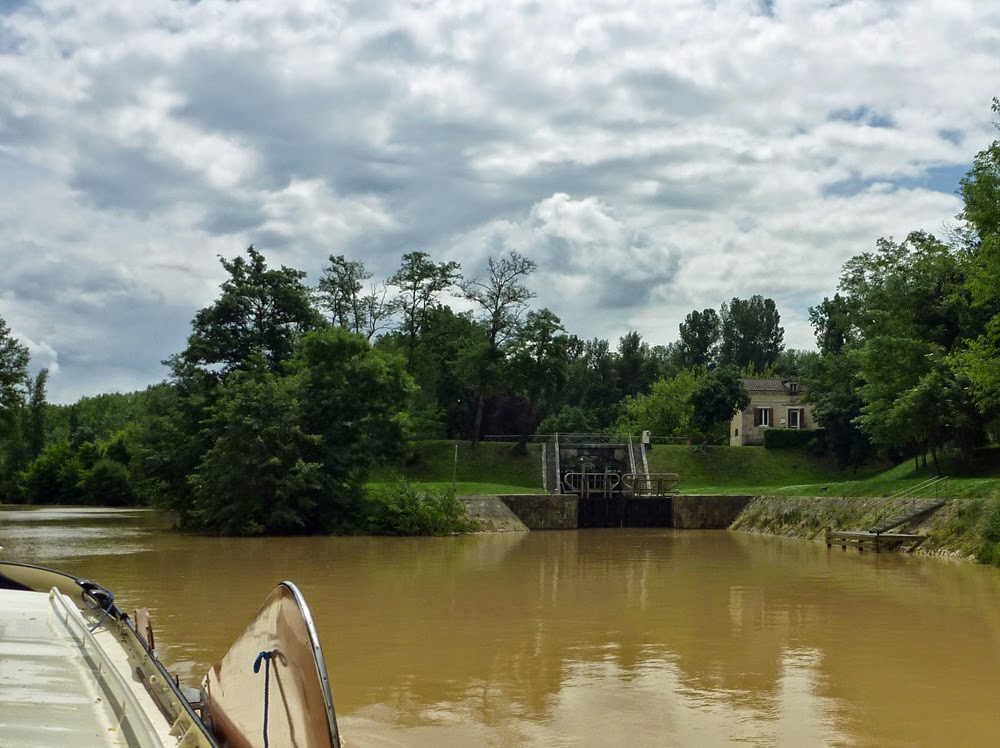 After enjoying a late brunch, we continued up la Baïse, passing the lock that leads up to le Canal de Garonne. 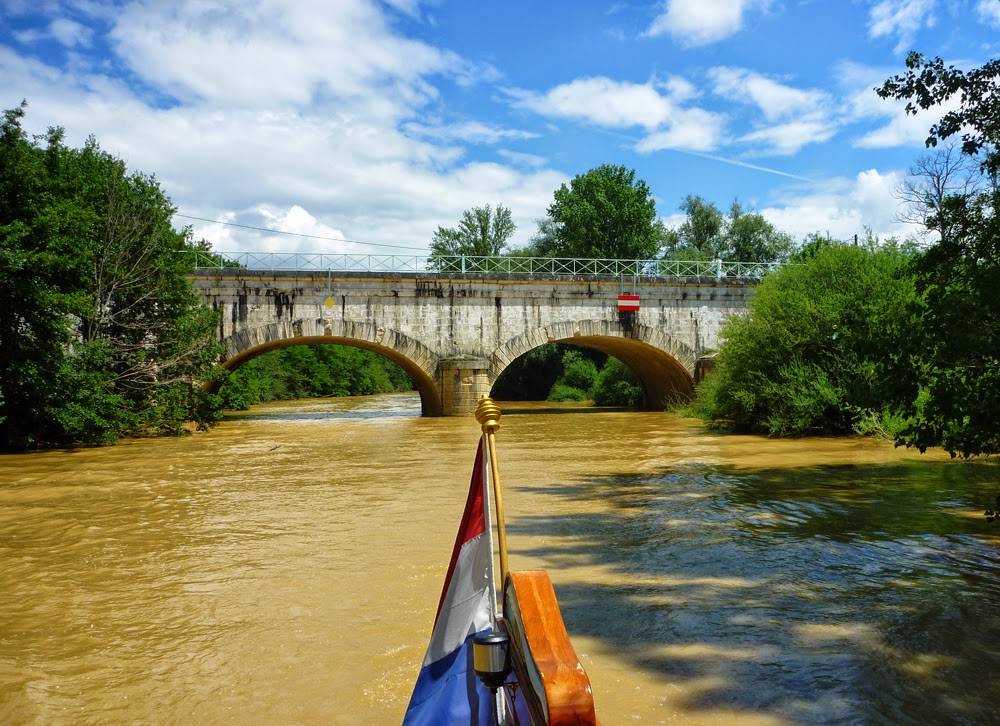 Four kilometres further along we passed under the canal as the skies attempted to clear. 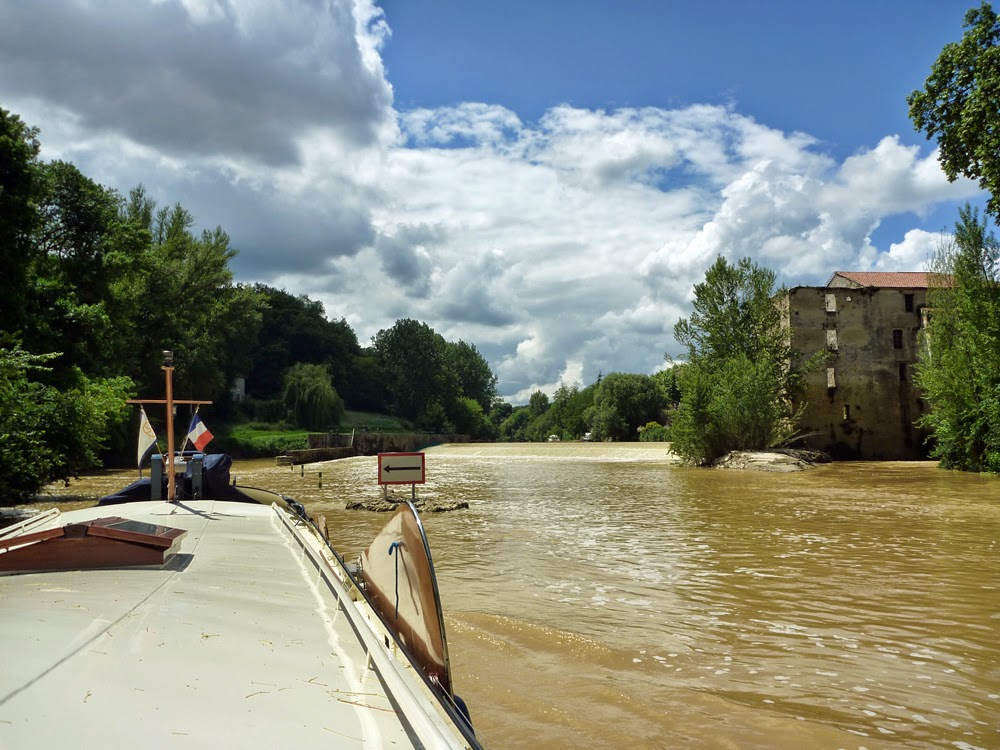 The speed and turbulence of the river increased as we approached Écluse Vianne. The river was up with water flowing over the separating wall between the weir outflow and the lock entrance. The top of an abutment, a directional sign and some navigation beacons were all that slowed the water in the approaches to the lock. 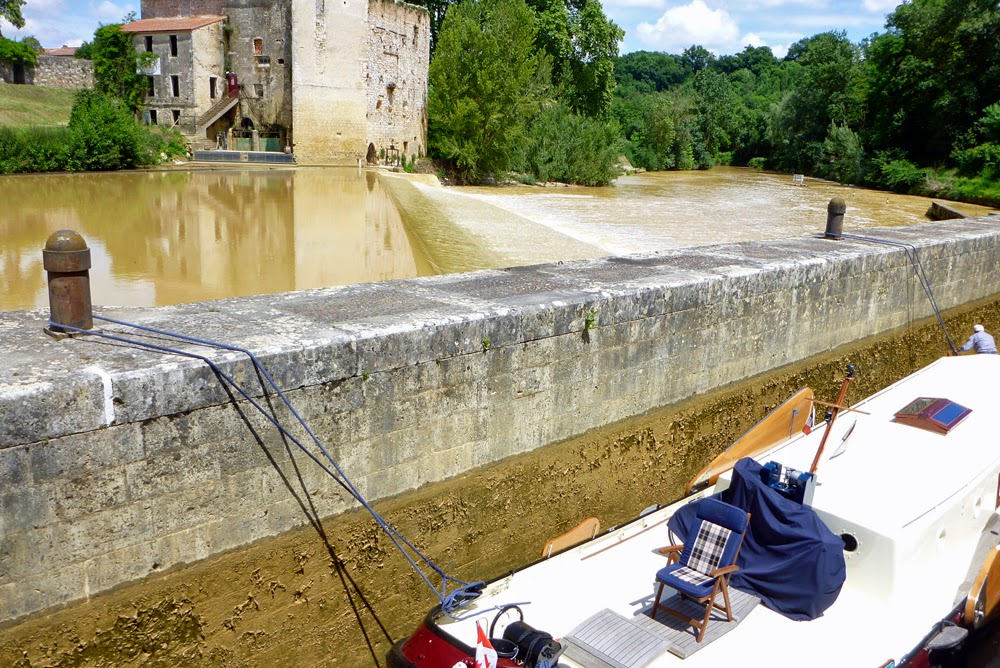 I dropped Edi off on the finger below the closed lock gates and then sat in the turbulence on the bollards as she set the mechanism in motion to cycle the lock down for us. The back eddy below the lock doors made it a tad tricky entering the chamber, but our fenders were well placed and up to their assigned tasks. 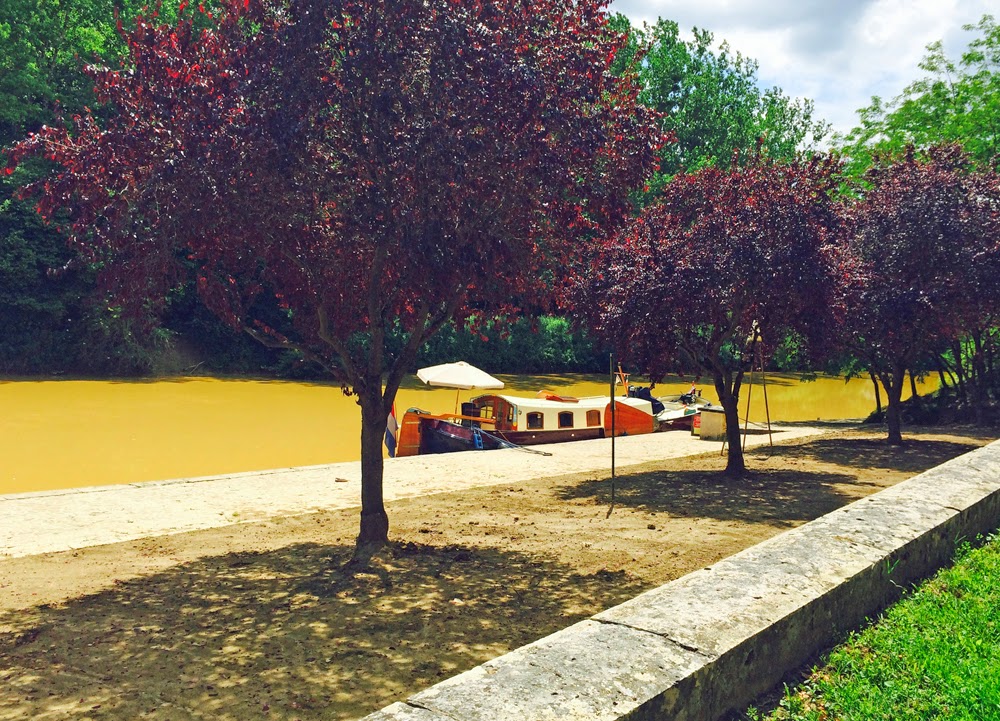 From below the lock we had seen open mooring spaces along the quai in Vianne, so once we had locked through, we secured to the solid concrete wharf and called it a  day. We had left the fast-moving Lot, ascended the faster moving Garonne and started our way up the raging Baïse. It was 1440, so we walked up into the town for fresh provisions. The only thing the town has going for itself is that its thirteenth century bastide walls are still standing. Inside it is nearly dead with most of the businesses closed. Of the two groceries, one was closed and the other may as well have been. Its shelves were near bare and its sparse produce selection was approaching compost. We selected an overpriced basket of strawberries with the fewest culls. 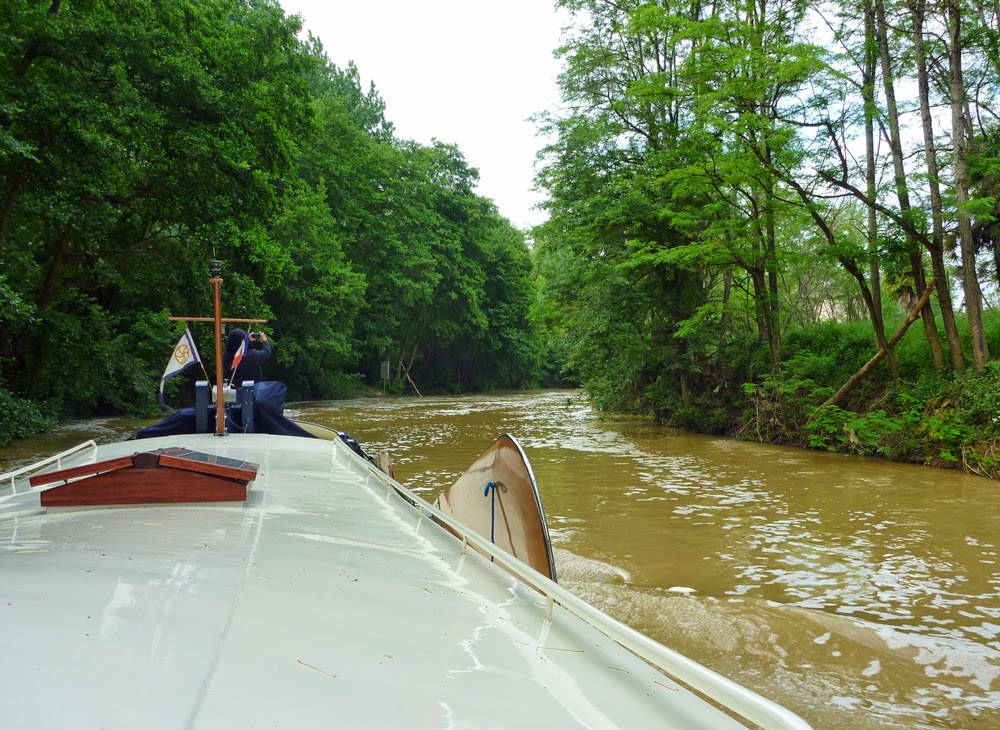 At 0850 on Saturday we slipped our lines and continued up the river. The level had risen overnight and the current was noticeably stronger. 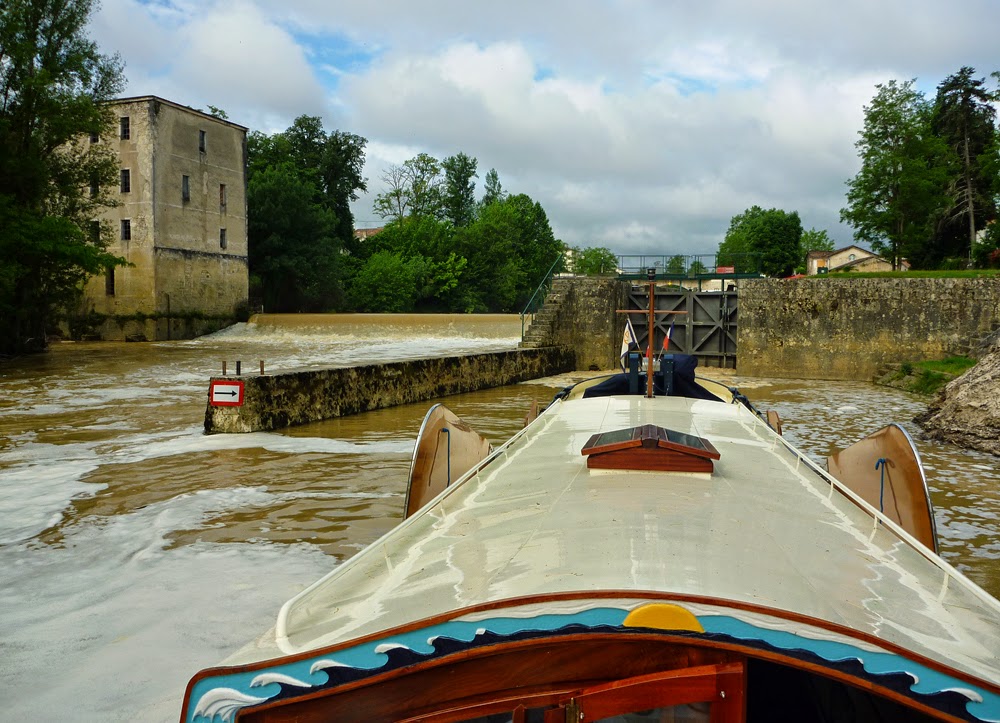 Three kilometres along and around two sharp bends, we approached Écluse Lavardac, where there was a large churn of turbulence and spume the few hundred metres leading to the lock. I dropped Edi off on a two-metre wooden wharf sited in the middle of the eddies below the weir. 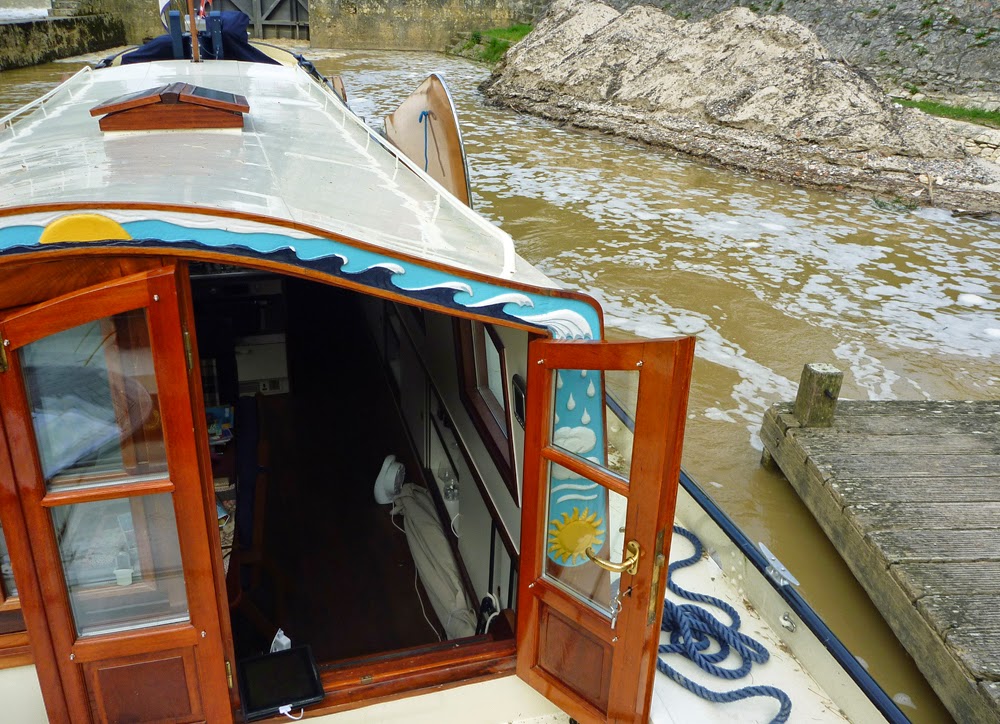 I dropped the spud pole and sat in the churn with a stern line to a bollard on the tiny quai, while Edi activated the lock. 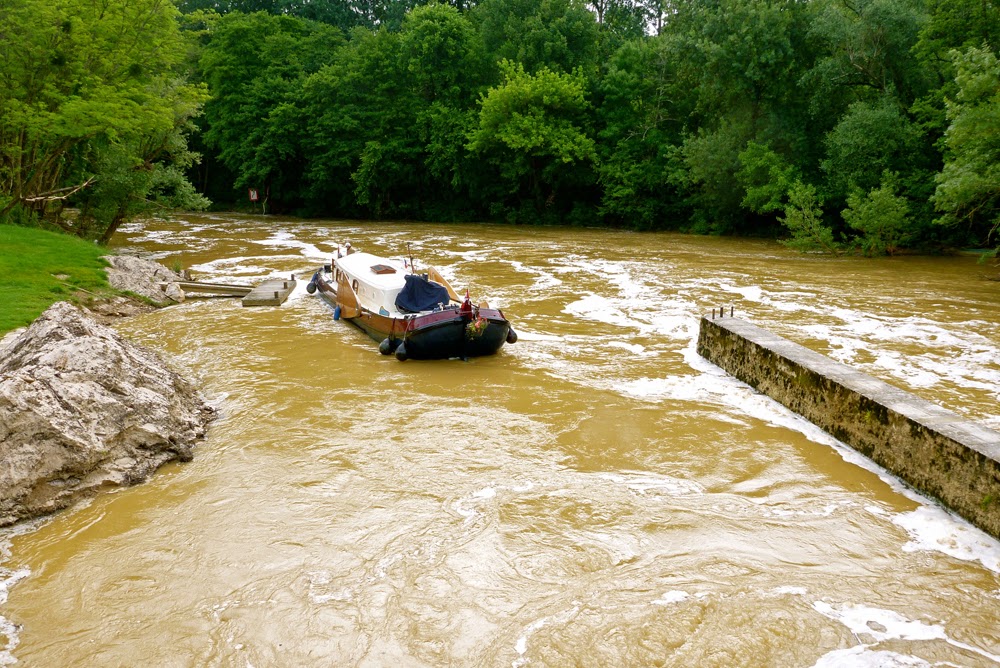 Edi’s view from the lock made the conditions on the water appear much more sever than they seemed from onboard. 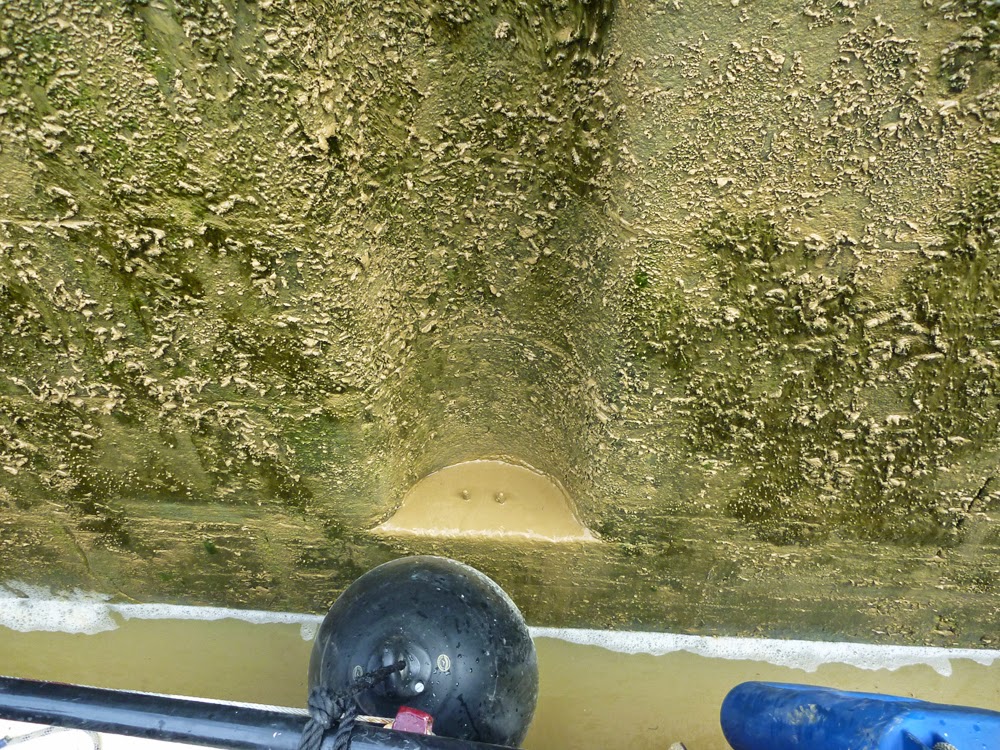 In the lock we found a continuation of the broken and dysfunctional systems. Missing bollards, badly placed bollards, broken bollards and other shortcomings do not allow a relaxation in the chambers, but force a constant adaptation and improvisation. The only predictable thing with the systems is that each lock will be differently setup and different things will be broken. 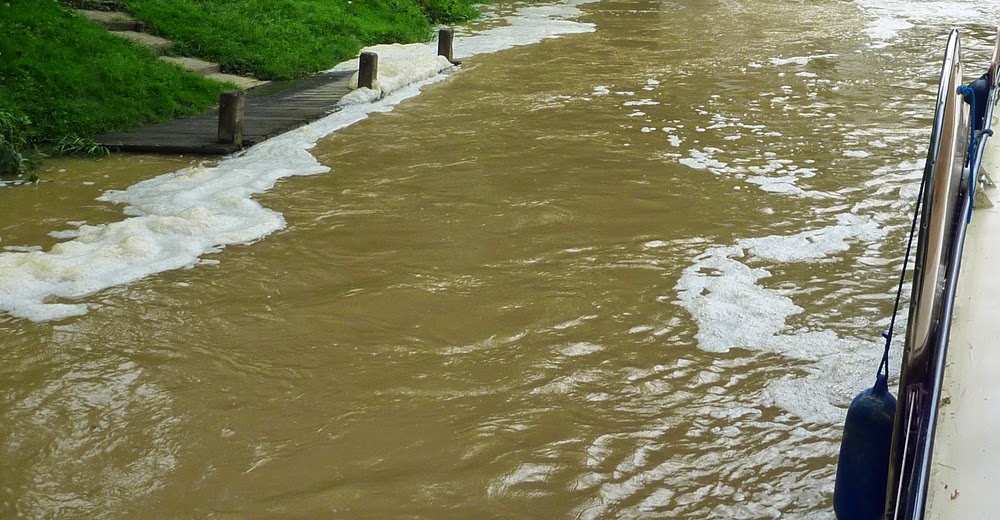 At the next lock, the landing wharf was nearly awash, its upstream end covered in foam. I stemmed the current and juggled with the eddies to land Edi so she could head up to the lock to activate the cycle. 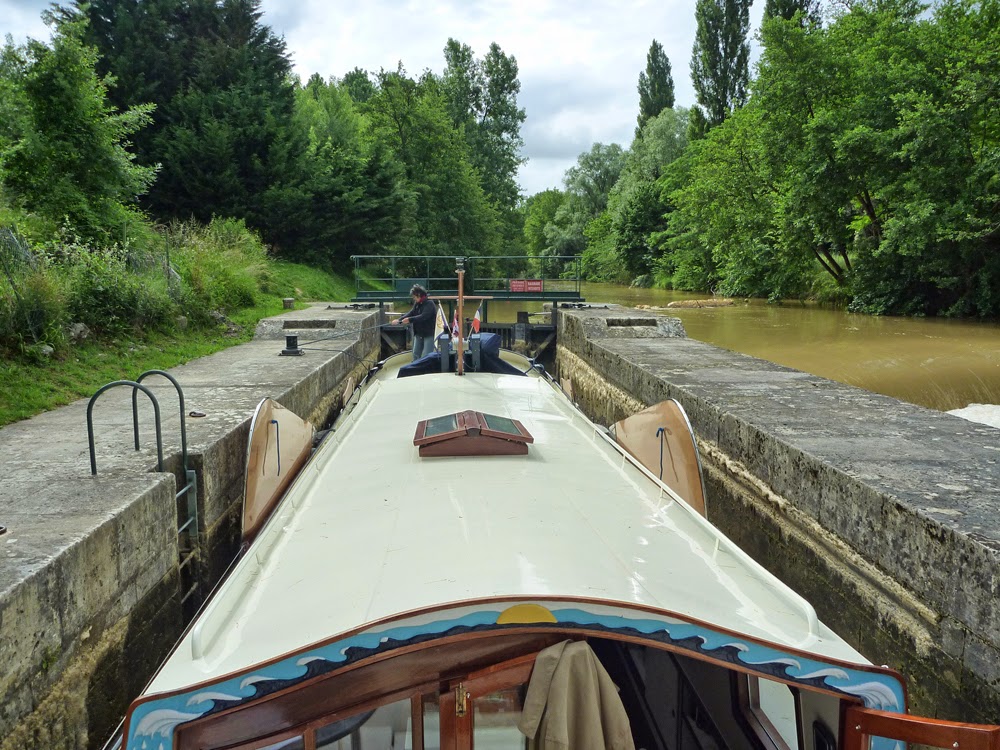 The turbulence at the lock entrance made threading Zonder Zorg into the chamber a bit more exacting than normal. This was further complicated by the locks above Lavardac being only 4.15 metres wide, rather than the 5 metres on le Lot and the 6 metres on Canal de Garonne. This narrower width left us with just a couple of centimetres clearance on each side of our leeboard fenders. 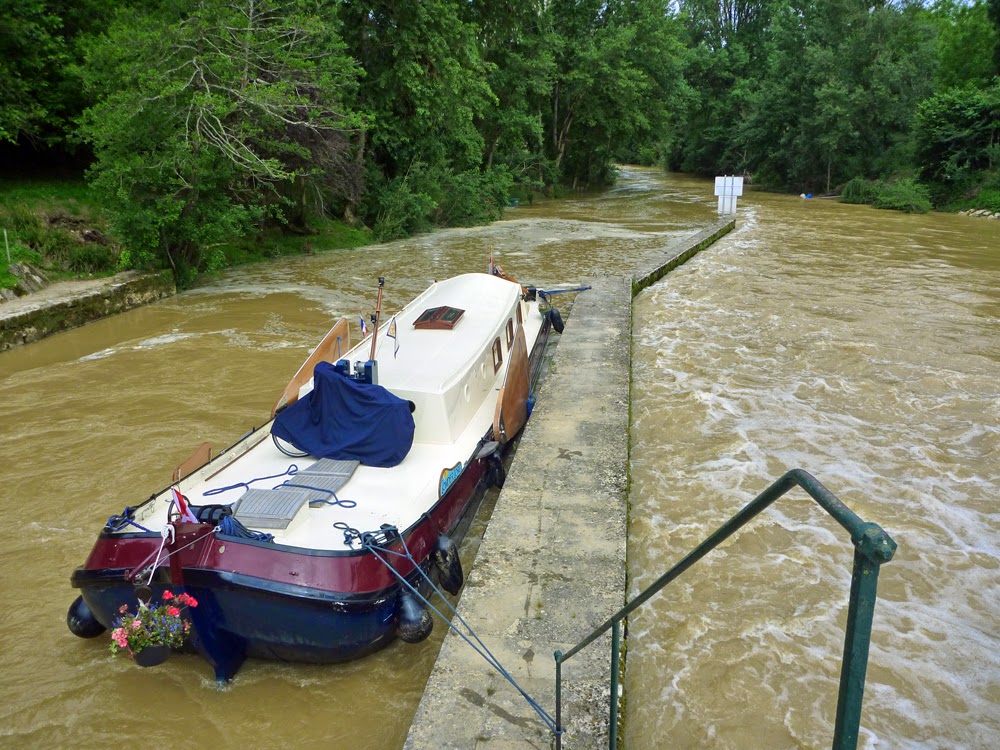 We continued working our way upstream against the heavy current and erratic turbulence. 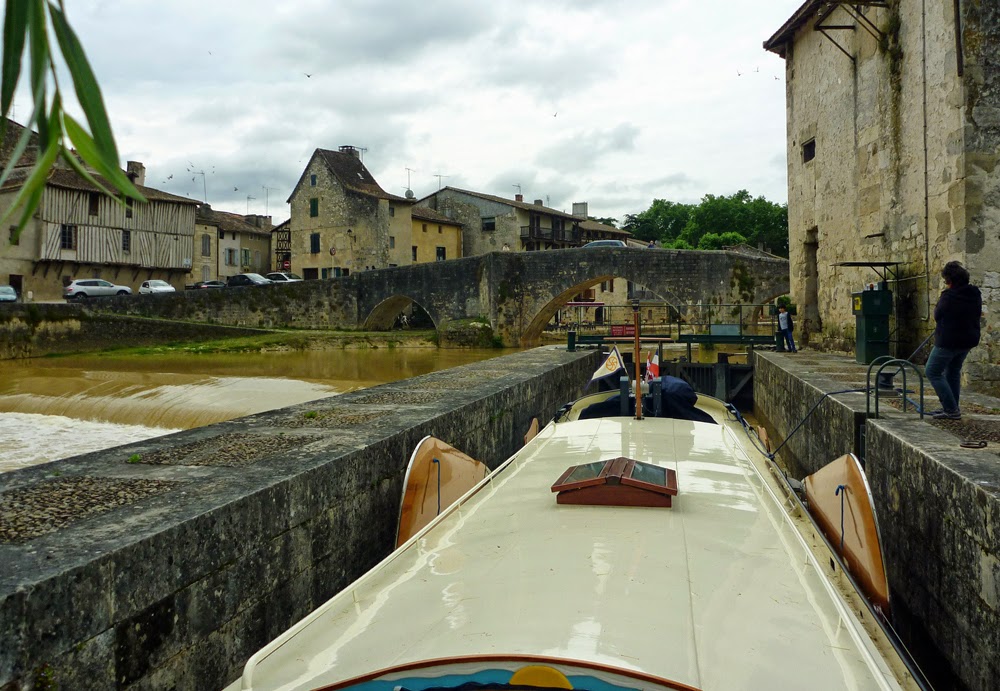 We arrived at Écluse Nérac after nearly three hours of very hard slogging against adverse conditions. We decided to stop for the day once we had cleared through the lock. 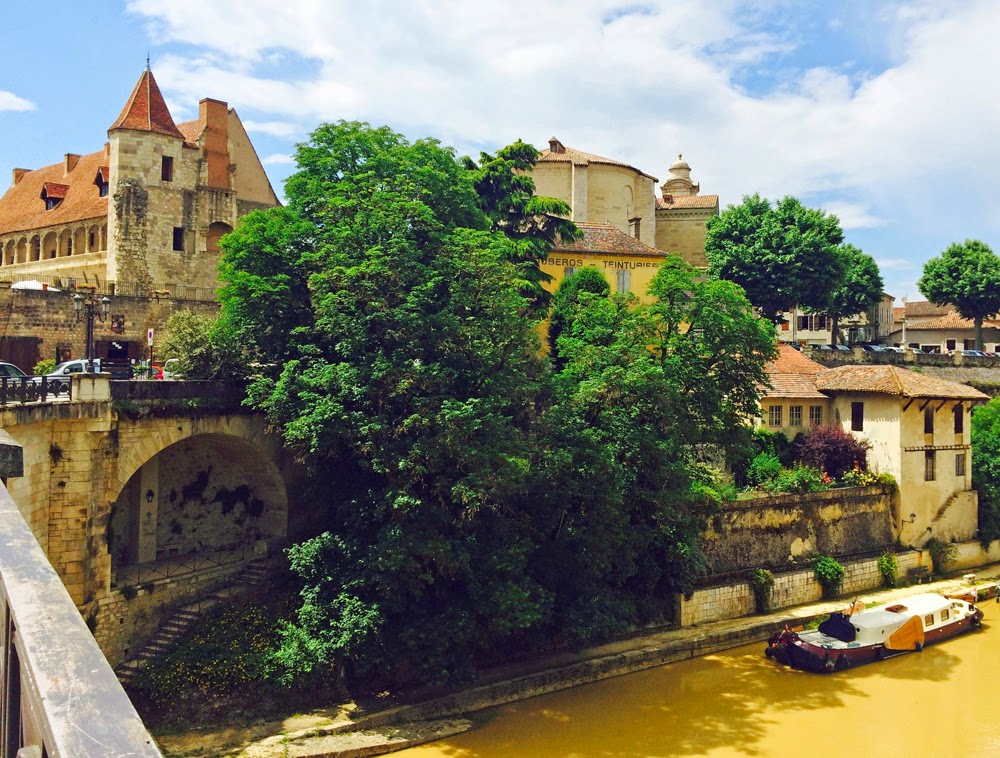 A few minutes before noon we secured to rings on the stone wall in Nérac. We were greeted with information that because of the flood conditions, the river had been closed to navigation for two days and would likely remain closed for another couple. We hadn't been informed of the closure because that happens on the way upstream only at the lock descending into la Baïse from Buzet. We decided to pause a bit longer.