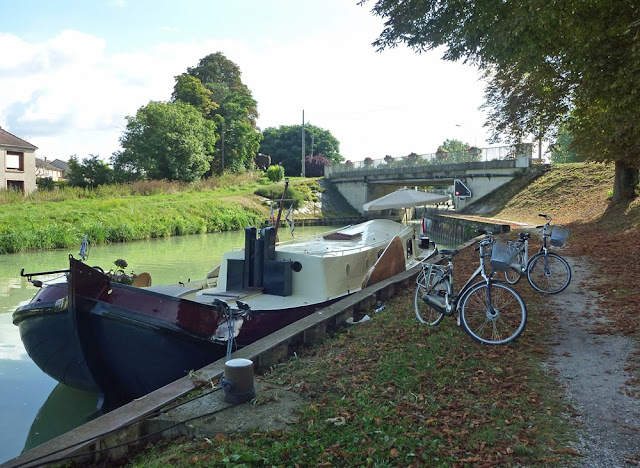 We had arrived in Ay on Sunday the 8th of September and had settled in on the wall immediately below the lock. For the first time since Namur, Belgium we dug the bicycles out of the forepeak. 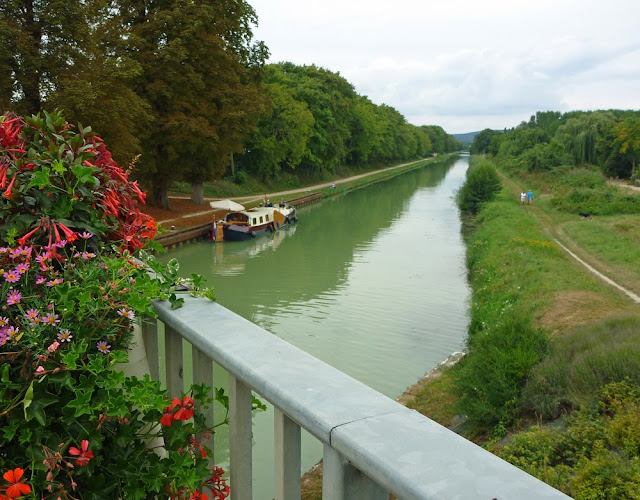 We needed fresh produce and meat or fish for dinner, so we crossed the canal bridge and continued along about 300 metres to the Leclair supermarket, which I recalled from a previous visit here a decade ago. The store was still there, but it was closed on Sundays. We turned around and headed the three kilometres into Magenta, across the Marne from Epernay, where we found the Leader Price open. It is located in a cheap neighbourhood and has very low quality produce and meats to suit its main clientele. Nonetheless, we did manage to put together a small basket to see us through until the better markets open on Monday. 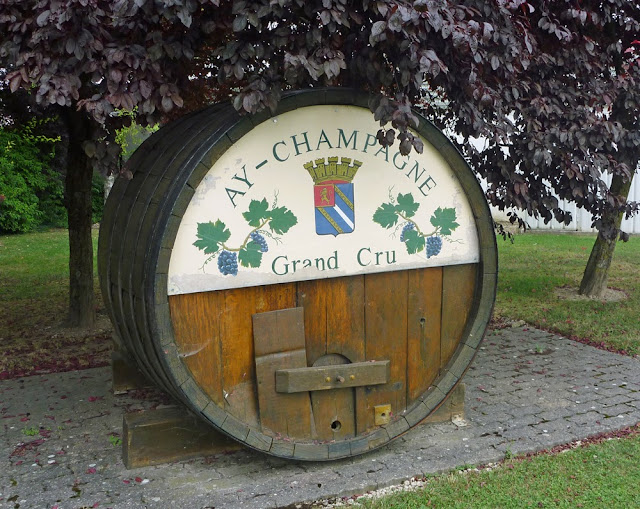 After lunch we walked into Ay to explore. At the town entrance is the wine country mandatory decorated wine barrel. Ay is one of the best of the Grand Cru villages of the Champagne and its specialty are the two red grapes of the region: Pinot Noir and Pinot Meunier. 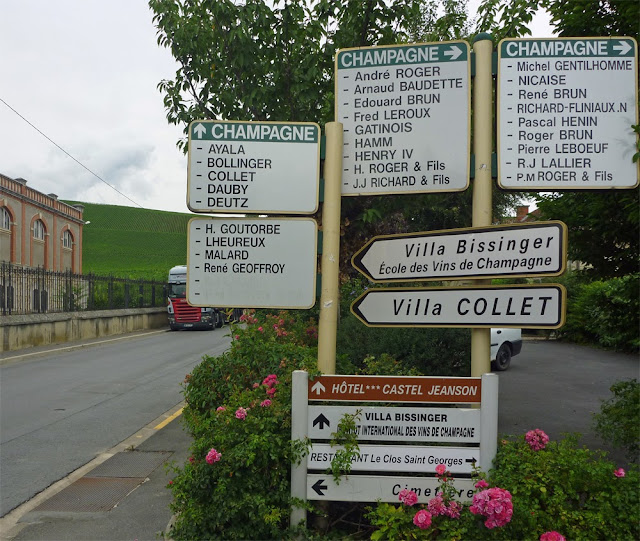 Ay is home to over forty Champagne producers. Signposts throughout the town pointed directions to those nearby. It is a small town, so most of the signposts show half to three-quarters of the producers. 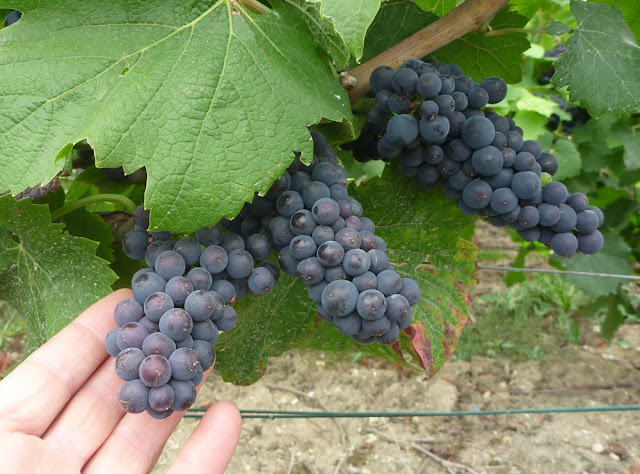 The town is long and narrow, ranging along a strip between the canal and the base of the slopes of Montagne de Reims. We walked the three blocks through to the beginnings of the vineyards. The grapes were in good tight clusters and most had taken on the deep blue-purple colour of maturity. 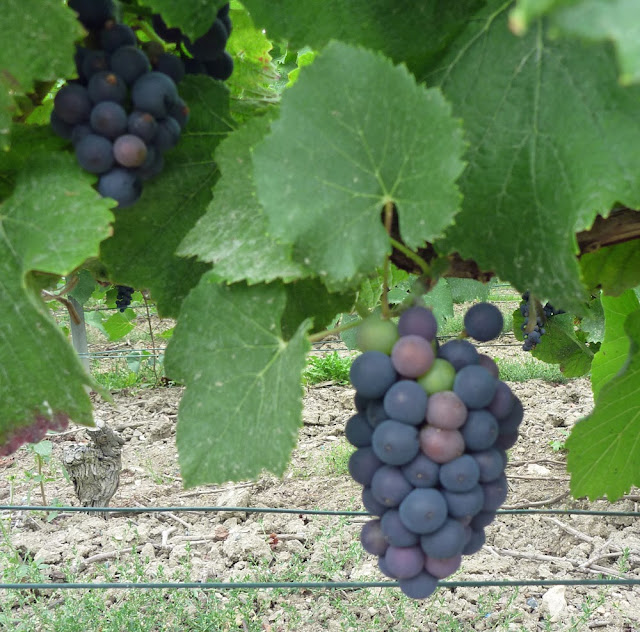 Some bunches in less sunny exposures were still in the process of changing colour. 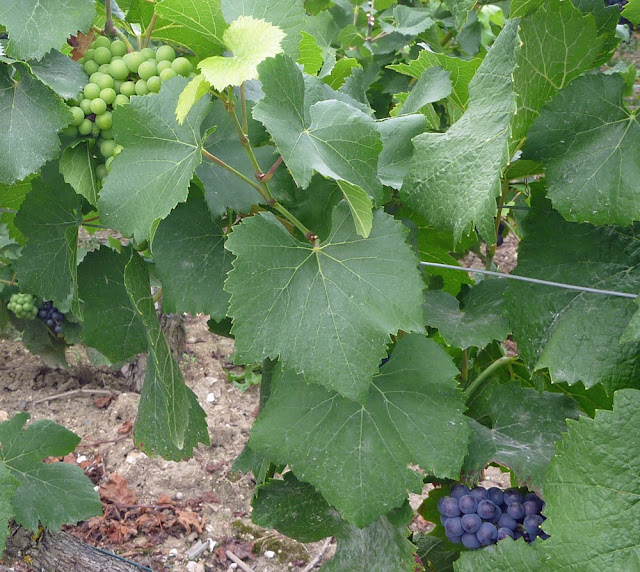 Still others had not yet begun ripening. It has been a rather patchy growing year, with frost, rain and hail disrupting the flowering, fruit set and the ripening. This is not unusual for the Champagne, a region that lies at the northern extreme of the viticultural zone. The vines are tough and resilient and over my four and a half decades of visiting the region, I have seen that the growers and producers are even tougher and more resilient. 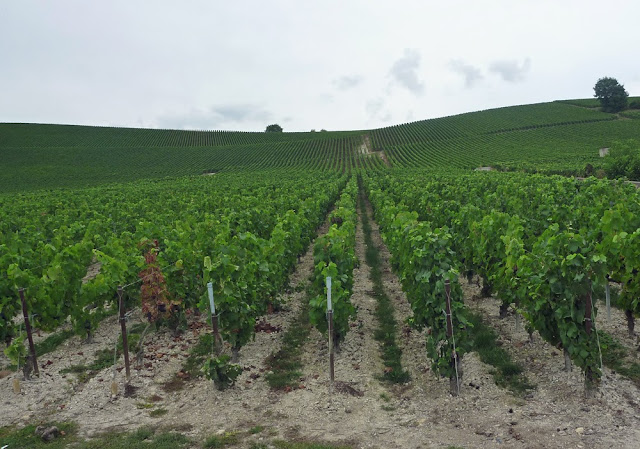 I have always been enthralled by the corduroy slopes of Montaigne de Reims. 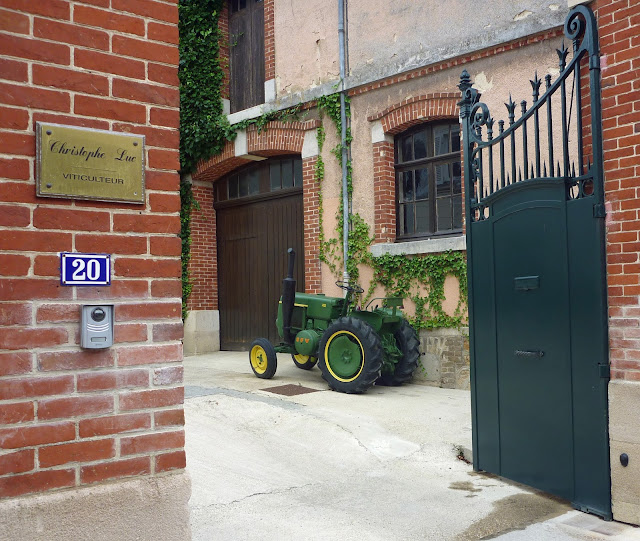 We passed a wonderful series of open gates giving glimpses into the domains and lives of les viticulteurs, the grape growers. To me the art and science of grape growing is the most important aspect of fine wine. Wine of quality cannot be made without quality grapes. The winemaker can do nothing to improve the quality that comes from the grower; the winemaker’s task is to prevent as much as possible the lessening of the quality as the grapes become wine. 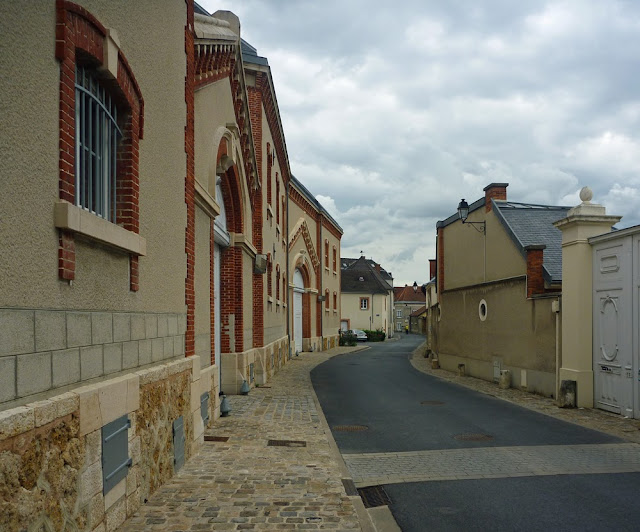 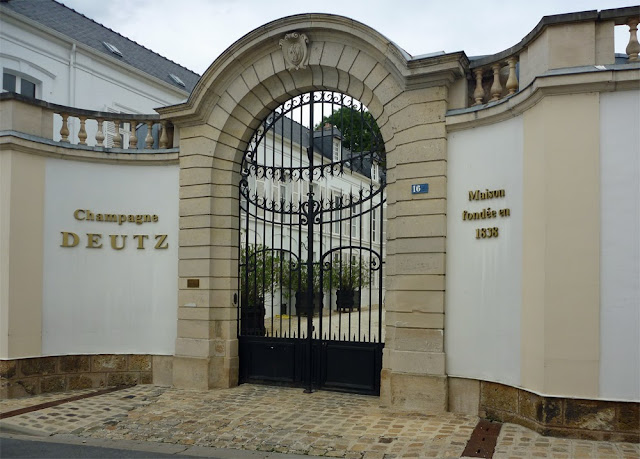 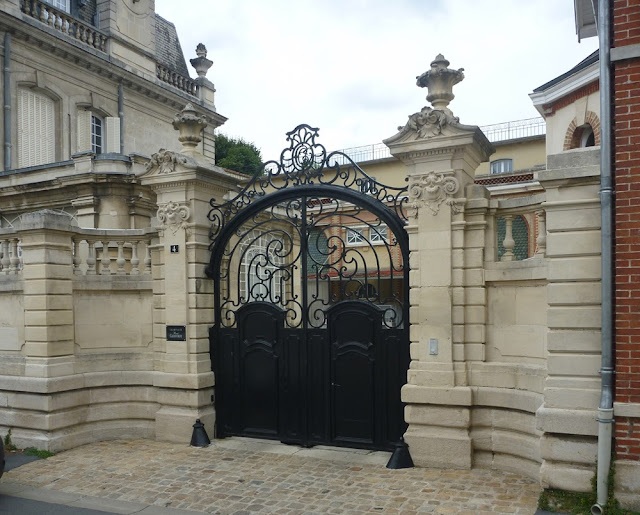 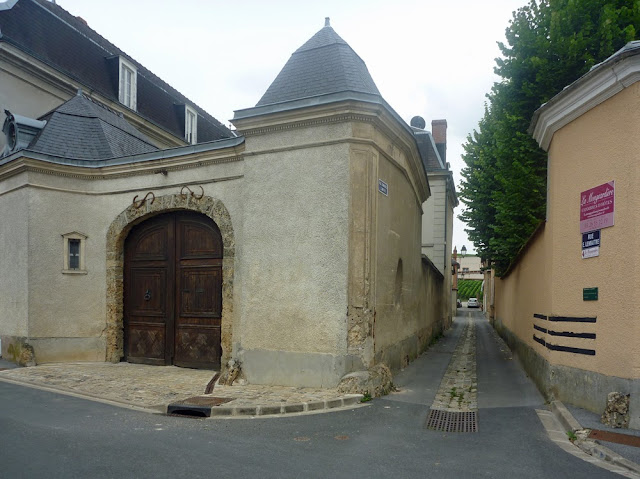 We walked along streets that seemed completely lined with Champagne producers, some large, some small, some famous, others near unknown outside their own small circles. It was Sunday and everything was closed. Edi and I seemed to be the only activity in town. 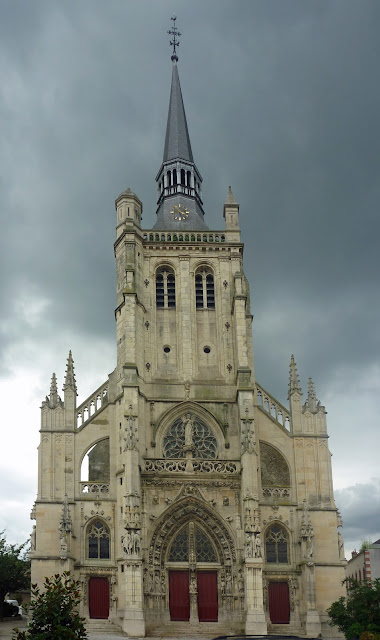 We headed back down into the centre of town, past the church as darkening clouds threatened more rain. 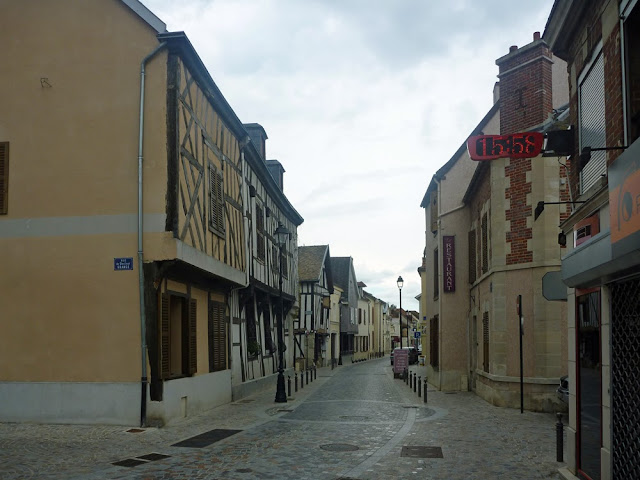 As we scurried to beat the rain back to Zonder Zorg, we hurried through an older section with many half-timbered buildings from a few centuries back. We promised ourselves to take more time in the following few days to further explore Ay and its surroundings. 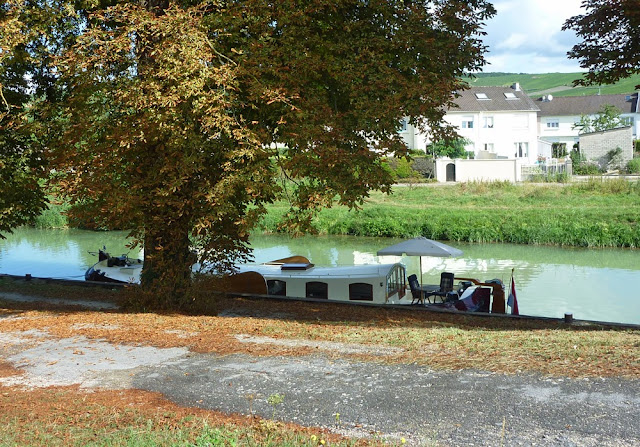 Back onboard, the rain passed and we relaxed. Within a week we had seen the temperatures plunge from a daytime high of 38º last week when we were in Sillery to 19º this week. Autumn was closing in on us and the tree above us sent a continuous rain of reminders onto our decks. 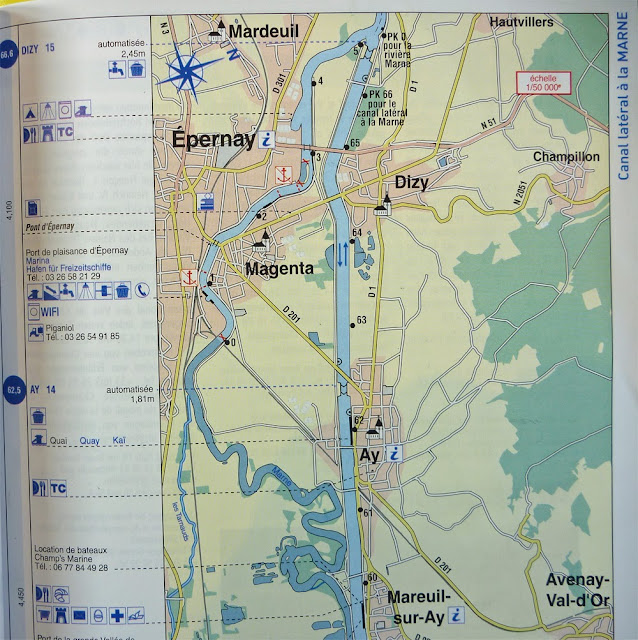 We had a visit scheduled with Champagne de Venoge in Épernay on Wednesday, and our thoughts had been to head down the canal four kilometres, pass through the lock at Dizy and then head a little over five kilometres up the branch of the Marne to Port de Plaisance d’Épernay. This would entail about two and a half hours of motoring. Moorage in Épernay was listed as €2 per metre per day, so €34 a day on top of the €14 for the ten litres of diesel consumed getting there and back to our free moorage in Ay. Edi suggested that for the €48 we stay in Ay, take taxis to and from Épernay and buy a bottle of Champagne with the change. 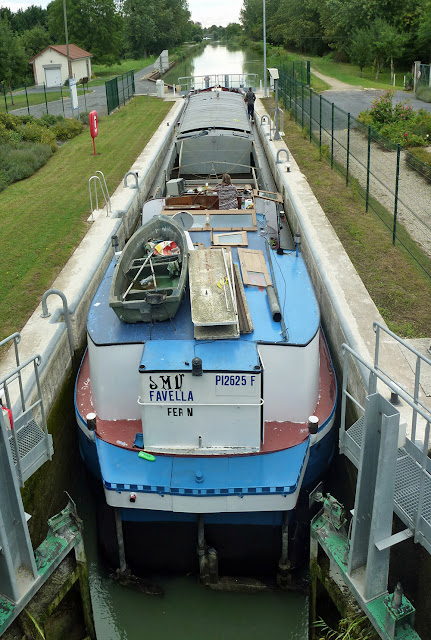 With the trees above us accelerating their defoliation, we decided to move Zonder Zorg back up through the lock to the quai above it. It has no overhanging trees. We watched as a Freycinet gauge peniche filled the lock. These barges are within a few centimetres of the same dimensions as those of the chamber, and we watched as the skipper put the twin rudders hard over so that the lock doors astern could swing past them and close. 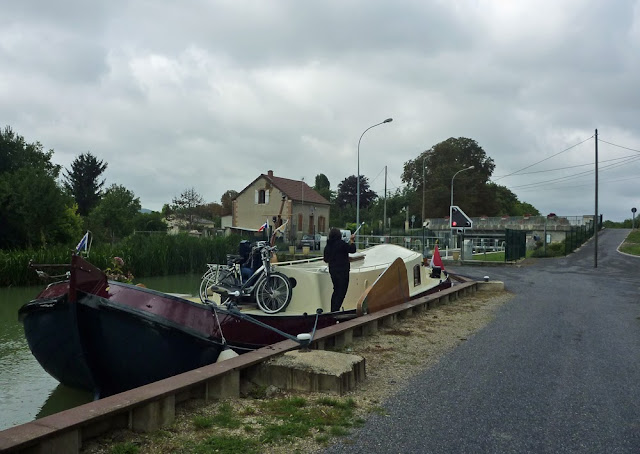 When the lock was clear we slipped our lines and I headed down canal about 200 metres to a point where the canal is about 20 metres wide, sufficient for me to wind Zonder Zorg around and in the process, twist the lock signalling wand. Meanwhile, Edi had walked up to the lock to receive the lines when I entered. In short order we had made it through the lock and were secured in a much less leafy place. We swept away the thick layer of leaves and washed the boat, then settled back into relaxing and enjoying Ay.
Posted by Zonder Zorg at 09:37