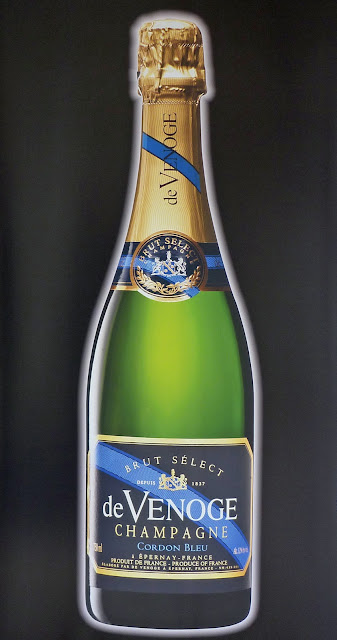 On Wednesday morning I phoned to reserve a taxi for 1440 to take us from Zonder Zorg to Epernay. This timing was calculated to get us there about five minutes before our 1500 appointment with Champagne de Venoge. The taxi arrived at the barge twenty minutes early, so we arrived at the doors of de Venoge nearly half an hour ahead of schedule. This left us with too little time to take a meaningful walkabout. Besides, it was threatening to rain again, so I rang the bell. 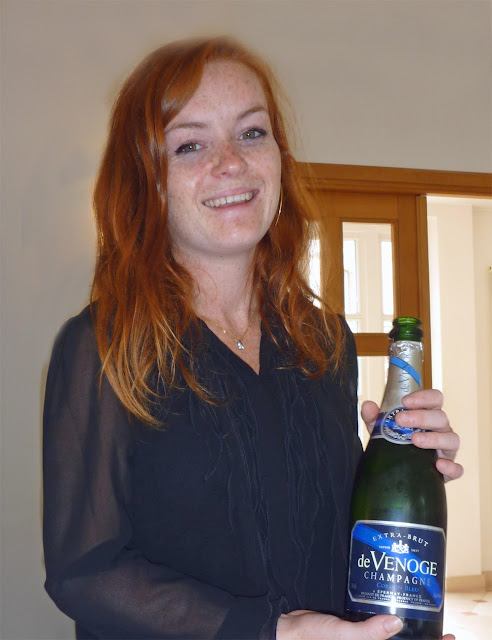 Our hostess and guide, Emma Dawe-Coz found no problem with our earliness. She is a lively young woman, born in French Guyana of a British mother and French father, and is nearing completion of her wine degree in Reims. Part of these studies is serving an internship in the export marketing offices of de Venoge. 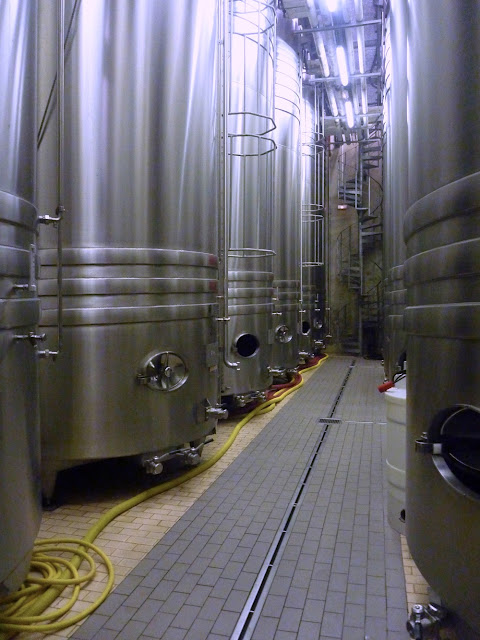 As we walked through the tank rooms, she explained the background of the house of de Venoge. It was founded by Henri-Marc de Venoge, a Swiss who had earlier travelled to Italy and discovered wine. In 1825 he settled in the Champagne in Mareuil-sur-Ay, where he set-up in the wine trade. In 1837 his business became Champagne de Venoge. His wines very quickly rose to prominence and he played a dominant role in the rapid expansion of the Champagne business. He experimented with disgorgement and the refinement of other steps in the Champagne process. In 1864 de Venoge launched Cordon Blue, a symbol of nobility since the sixteenth century, and which has since become the synonym of refinement and of the art of living. De Venoge is credited as the originator of the illustrated label, a departure from standard at the time; black lettering on white paper. 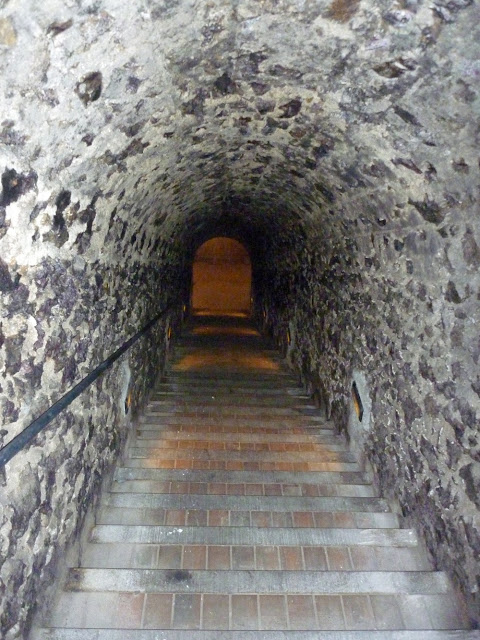 From the fermenting rooms we descended deep into the chalk strata that underlie much of the central Champagne region. The chalk holds moisture well and maintains a humidity of around 70% in the cellars and the temperature remains a rather constant 11º to 13º year round. These conditions are ideal for the secondary fermentation of the wine and for its ageing on lees. The network of chalk tunnels beneath de Venoge extend about a kilometre and a half. De Venoge is considered a medium-sized house, annually producing about 800,000 bottles. Although it is one of the Grands Marques, its wines are not found in supermarkets. The house prefers to sell to restaurants, hotels and wine shops. 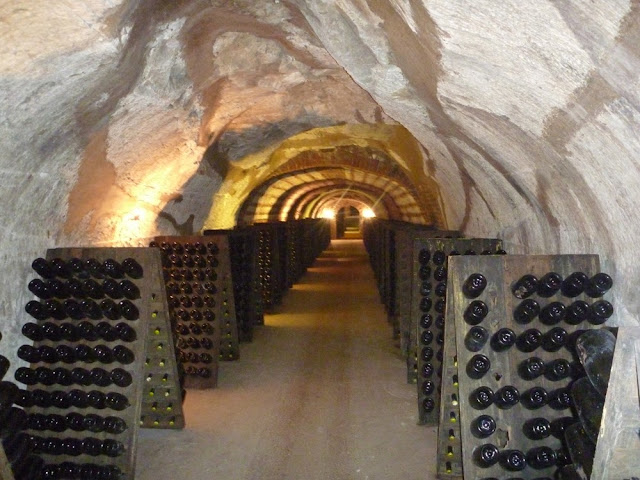 We walked past lines of pupitres, the riddling racks that are used to move the sediment from the side of a bottles to its neck. The sediment is mainly dead yeast cells from the second fermentation, the fermentation in the bottle that gives Champagne its bubbles. At de Venoge, hand riddling is still done on its cuvées prestiges and its vintage wines. 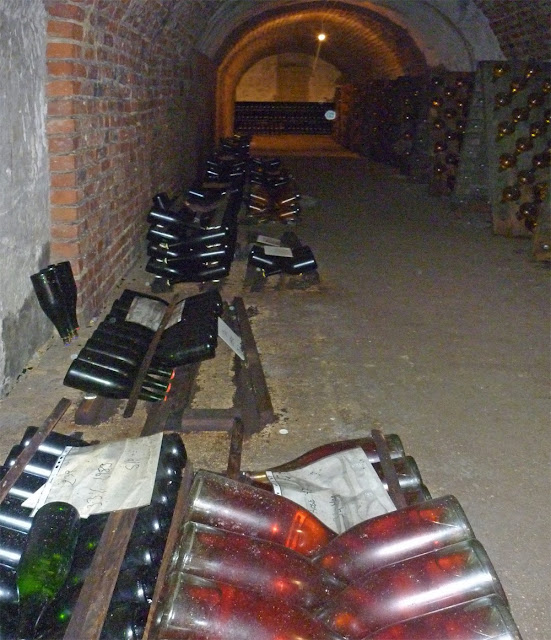 We then came to the reserves of older vintages. There are variously sized stacks of the what appeared to me to be the whole gamut of the house’s vintage-dated brands: Louis XV, Grand Vin des Princes, Blanc de Blanc, Blanc de Noirs, Brut Rose and Cordon Blue, and these were in varying size formats. 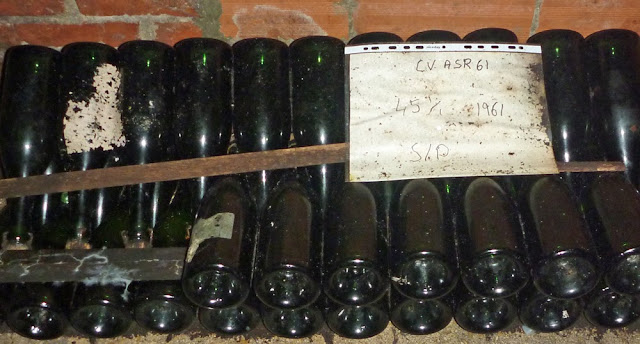 I found a bin of 1961. The scrawled label on the stack showed 45 bottles remaining. 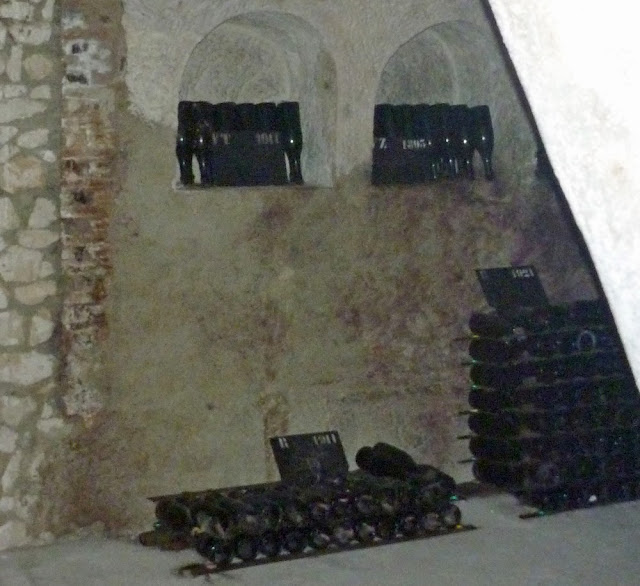 A bit further along was a barred gate, much like the image of a prison door. Emma told us the room beyond held the older vintages, but it was too dark inside to see anything but forms. I thrust my camera through at full arm’s reach and shot some random flash photos. One of the photos showed some stacks around the corner to the right and across on the opposite wall. The labels that are readable show bottles from 1921, 1911 and 1893, two of the vintages younger than our skûtsje Zonder Zorg and one older. 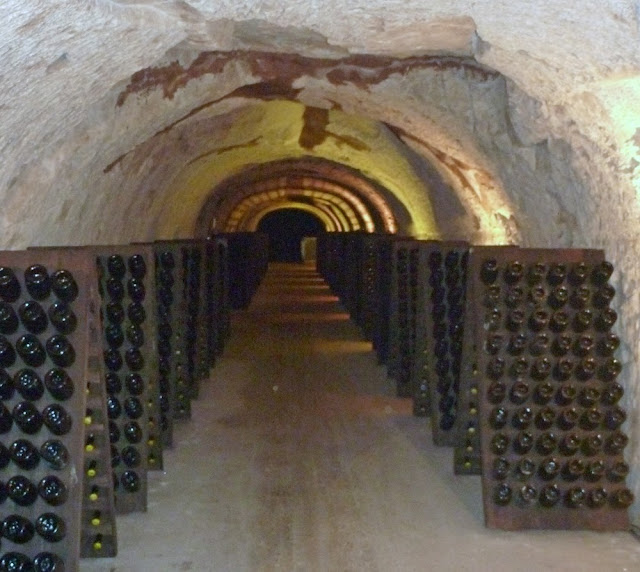 We continued our circuit of the caves, slowly making our way back to the staircase. 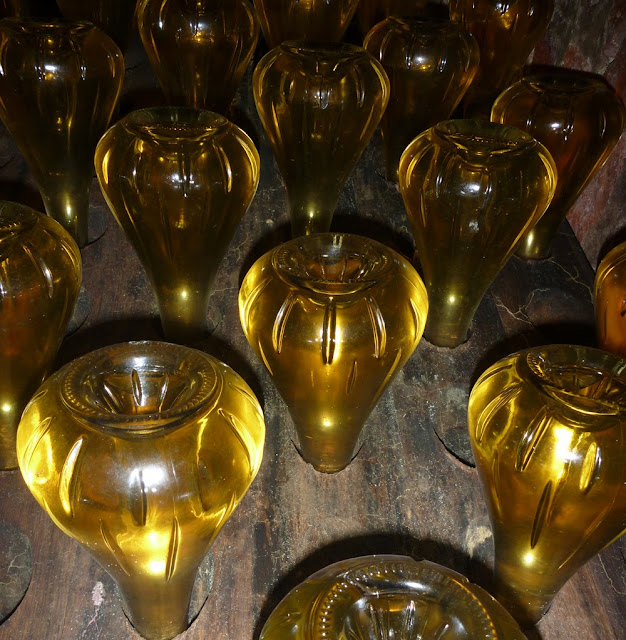 I couldn’t resist another shot at a rack of bottles of Louis XV. 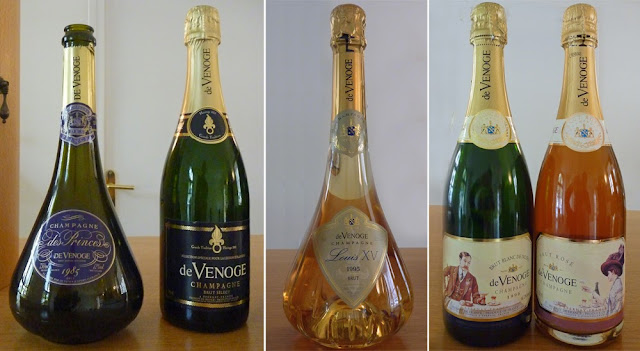 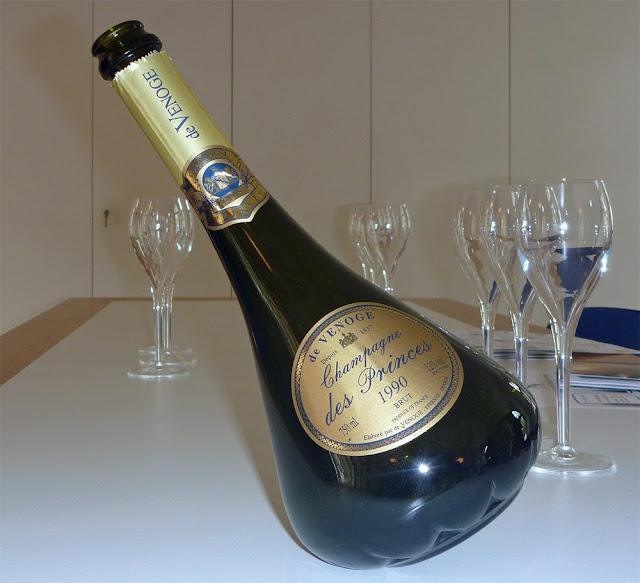 While we looked at the displays of current and past packaging, Emma prepared a tasting for us. 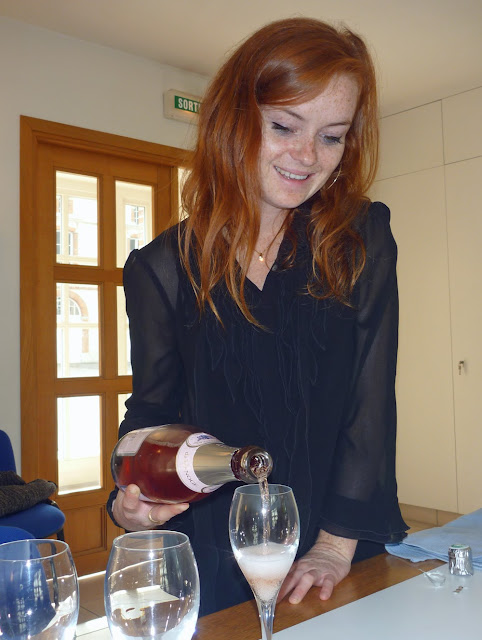 We tasted a range of Champagnes, beginning with the Cordon Blue Extra Brut and progressing through to the Rosé Brut Réserve. Our favourites were the Blanc de Noirs Marquis and the Rosé Brut Réserve. We particularly liked the Rosé, with its hints of strawberries on the nose, delicate cranberry-strawberry palate and long, elegant fruity finish. This is finest non-vintage rosé that I can recall tasting in my many dozens of cellar visits in the Champagne since my first visit here in 1966. At about €35, it is definitely on our buy list.
Posted by Zonder Zorg at 09:38