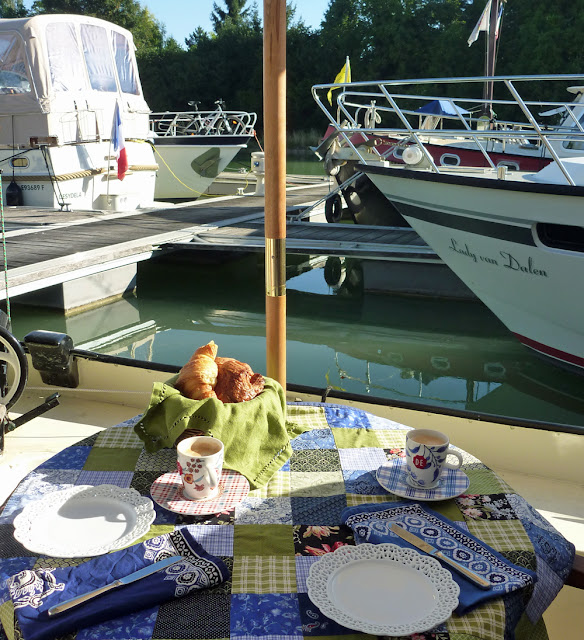 On Saturday morning the 7th of September I walked over to Case à Pain for some pain chocolat and croissants, which we then enjoyed in the cockpit with cups of espresso. As we relaxed over breakfast, the sky slowly filled with cloud and the forecast rain showers began. We had the umbrella up, so we continued. 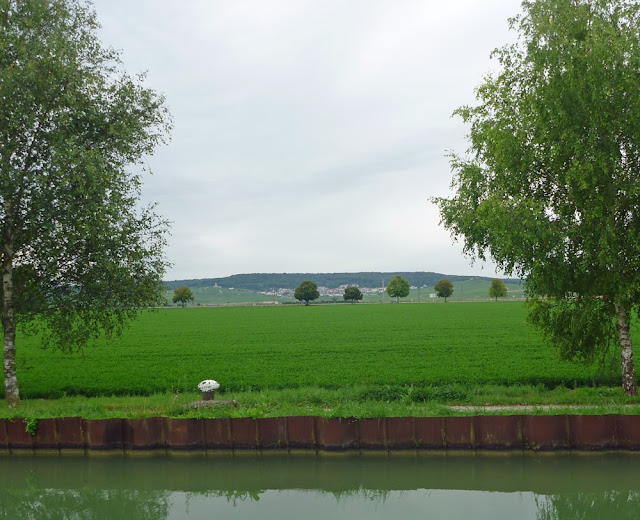 At 1015 we slipped from the wall in Relais Nautique de Sillery and continued up the canal. We glided along through wheat fields with a backdrop of Champagne villages nestled among their vineyards on Montagne de Reims. 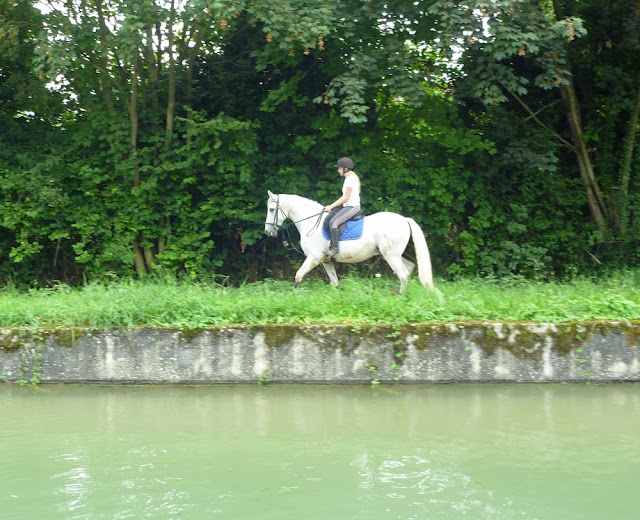 It was drizzling lightly, but this did not deter the serious fishermen, nor joggers nor even a young woman on her horse, all of whom used the old tow path beside the canal. 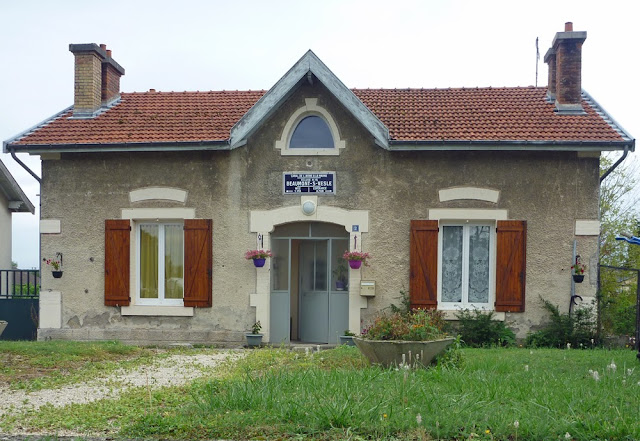 Along our planned route for the day were three locks leading up to the bief de partage, the summit pound, in the middle of which is Souterrain de Mont-de-Billy, a 2302 metre long tunnel under a rib of Montagne de Reims. From the tunnel, the waterway leads down eight locks to the end of the canal. The lock houses on the way up were occupied and well-maintained. 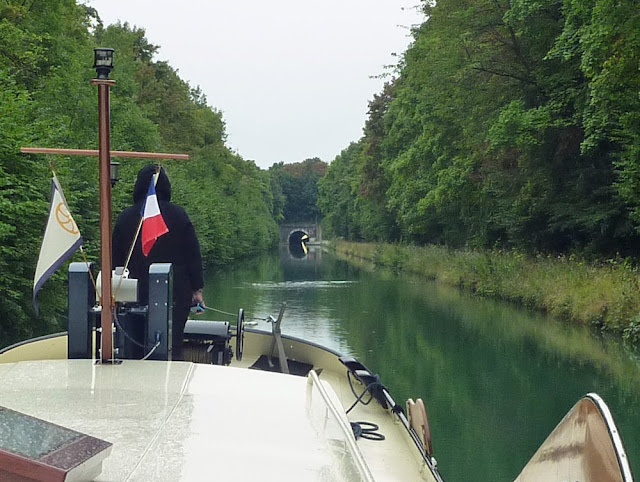 The intermittent drizzle had turned to persistent light rain by the time we arrived at the entrance to the tunnel. Its signal light was red and we could see the interior lighting was on, indicating a boat was inside. We didn’t know whether the boat was coming or going. If it was going we had a long wait; if it was coming the wait was much less. 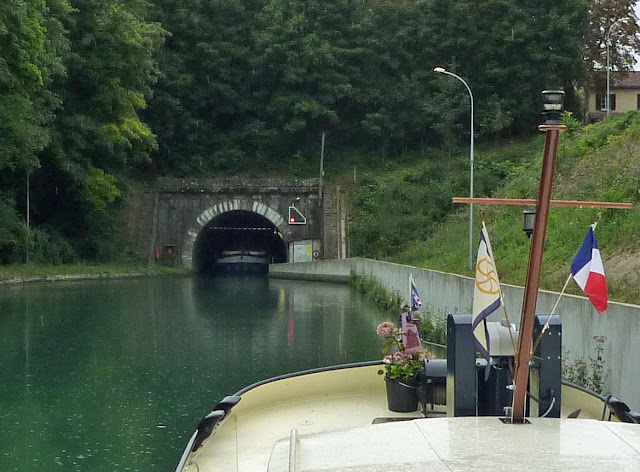 There are no bollards along the new concrete wall in the tunnel approach, so we eased over and dropped the spud pole. Within a few minutes faint details emerged in the shadowy darkness of the tunnel mouth. The details filled and soon became the bows of a commercial peniche completing its transit. 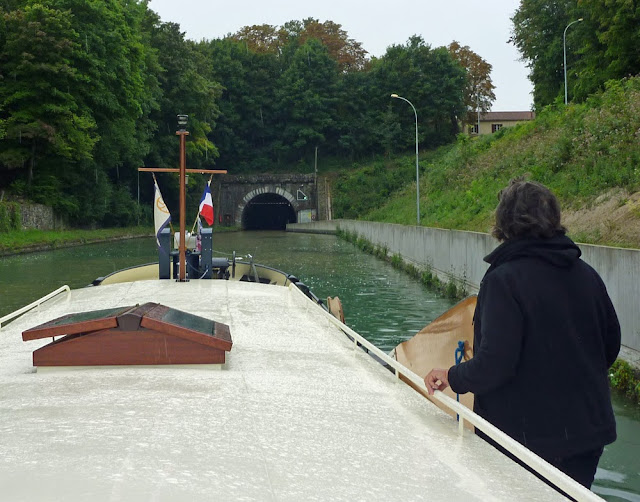 Immediately the barge had passed the sensors at the mouth of the tunnel, the traffic light switched from red to green. As its stern cleared the mouth, the tunnel’s interior lights went out. We waited for the suck and turbulence of the passing barge to ease, and then raising the spud pole, we headed toward the entrance. 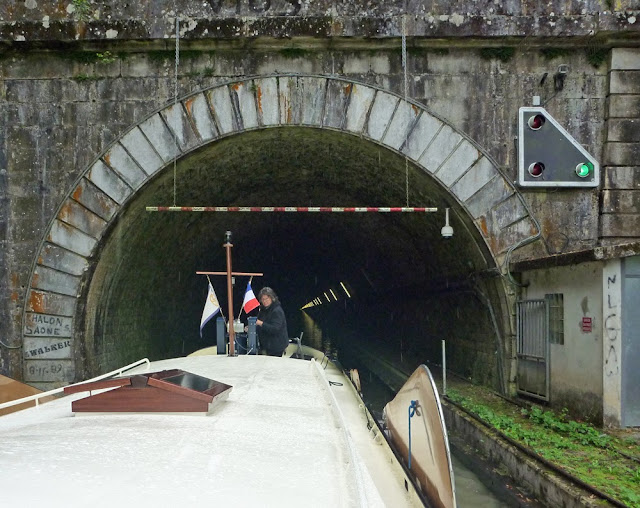 As our bows crossed through the beam of the sensors, the interior lights came on. Faintly in the distance we could see the point of light at the far end of the tunnel, 2.3 kilometres away. 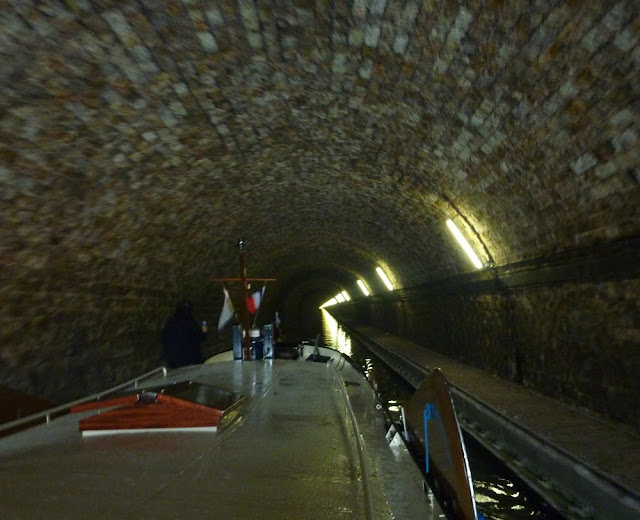 The entire interior of the tunnel is lined with stones laid in a graceful arch. From this, it appears to me that the method of construction would have been to dig a deep trench across the ridge, build the arched roof and refill the trench on top of it. The tunnel was completed in time for the opening of the canal in 1866. 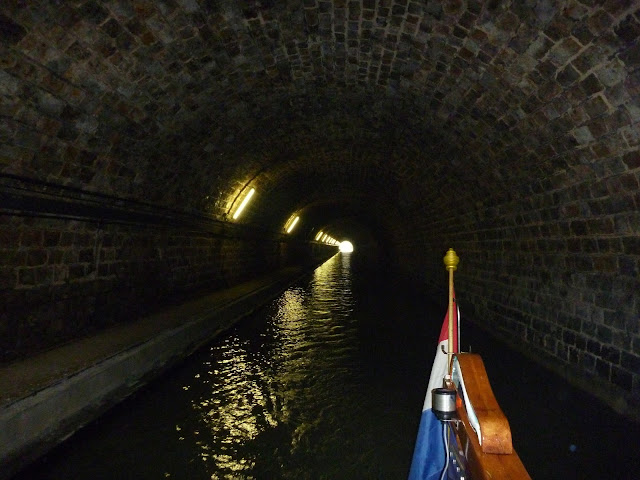 Looking back we could see the entrance slowly getting smaller. The interior was dry, with none of the commonly found dripping from the tunnel roof. 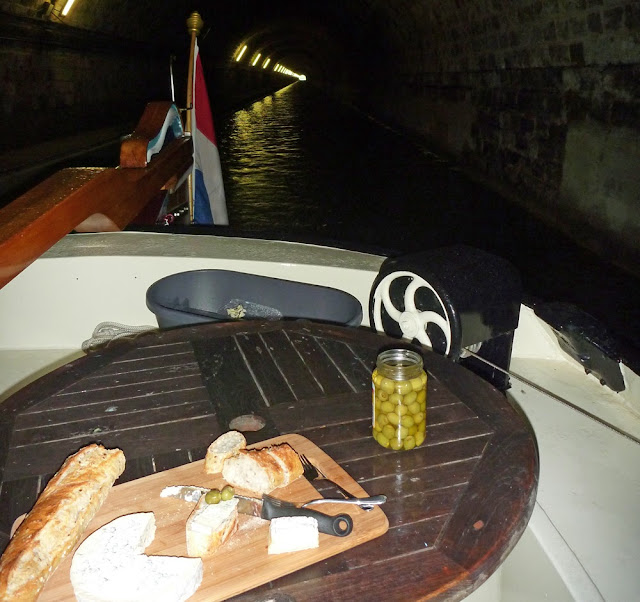 We took advantage of the respite from the rain. Edi went below and quickly put together a tray of bread, cheeses and olives for us to enjoy  during the twenty-odd minute passage through the tunnel. It was not her usual fancy spread; the table top was wet from the rain and would have soaked a tablecloth and our dry time was not anticipated to be sufficiently long to allow her to do a fancy arrangement. Lunch was wonderful, made even more so by the setting. 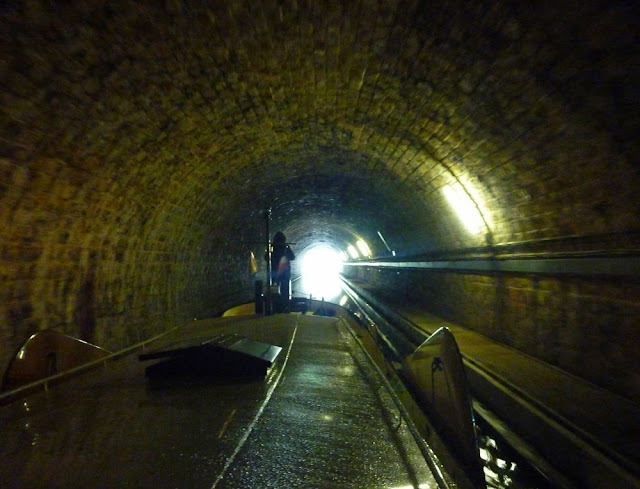 Zonder Zorg handled superbly through the tunnel, balanced between the effects off each wall and easily seeking the centre. A little bit of guidance with the tiller from time to time was all that was required. After twenty minutes we were at the end and ready to head back out into the rain. 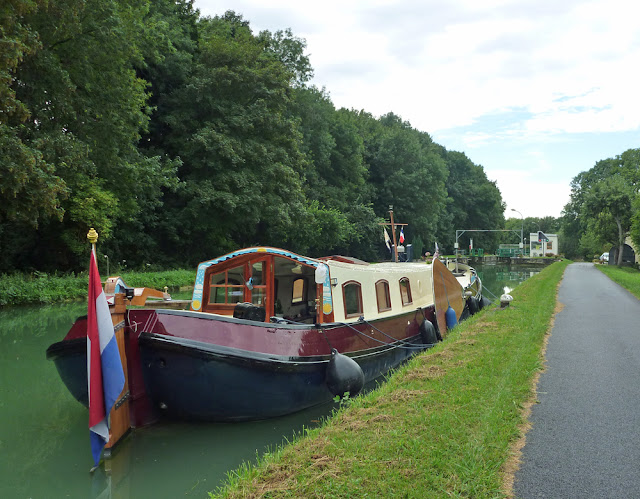 We started down the six-kilometre long series of eight down-bound locks and about halfway along we came to a malfunctioning one. As we approached, we had as usual turned the control rod dangling over the canal. It lit the orange flashing light at the gate and turned the signal from red to red and green. It did everything that was automated to happen except filling the lock and opening the gates for us. We secured to a bollard on the bank and I called Ch22 on the VHF. Mme. l’eclusier said: “J’arrive”.

The next lock malfunctioned also. It had allowed us in, but after I had lifted the activation bar the doors would not close. Again I signalled the lock keeper and she quickly came to set things in motion again. She seemed to know exactly what to do, as if these were regular occurrences, which I suspect they were so late in the season. They are likely on the VNF list of winter maintenance. 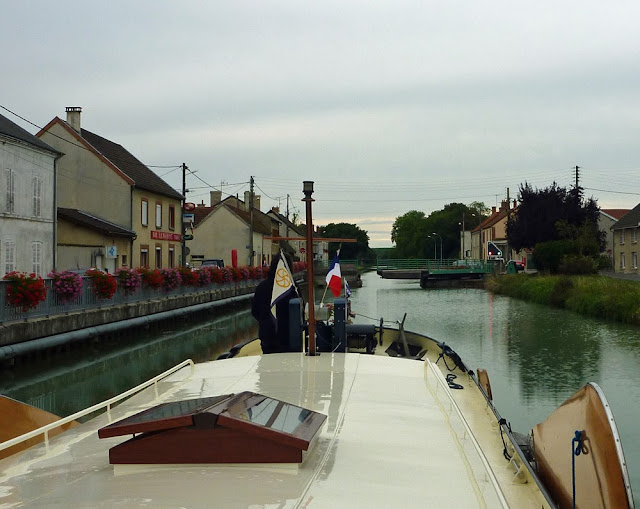 At 1607 we finally made it down to the end of Canal de l’Aisne à la Marne, a T-junction with Canal Latéral à la Marne. We turned to starboard and headed downstream. The first lock along the canal, the one in Tours-sur-Marne malfunctioned, so I needed to call VNF again. It took nearly half an hour for a different lock keeper to arrive and lock us through, and by this time it was getting very tight for us to make it through l’Écluse de Mareiul before it closed for the day at 1700. Slowing us along the way was the first movable bridge we have seen since the Netherlands, but it responded quickly to our twist of the dangling wand and we needed to pause for only short while.

We arrived at the signalling wand for l’Écluse de Mareiul at 1650 and watched as our twist was acknowledged by a flashing orange light. However, the red light went out and stayed out; we got no red and green to show the lock was being prepared for us. We later learned that, even though the system is listed as operating until 1700, any new locking-through is switched off ten minutes before that; we likely missed it by seconds. 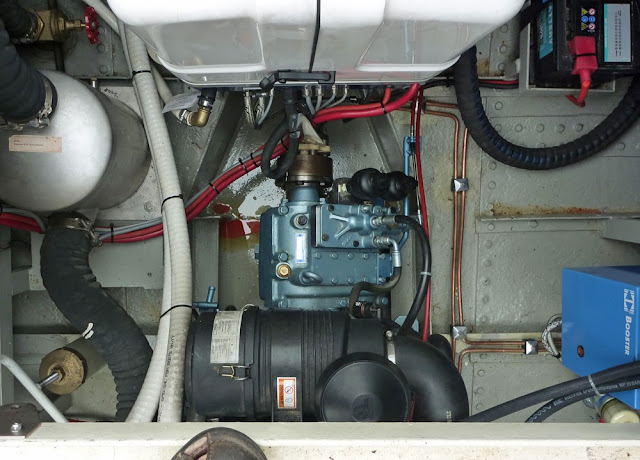 We secured to the bollards on the quai at the approaches to the lock and shut down for the day. We were in the countryside a kilometre short of the village of Mareiul-sur-Ay and four kilometres short of the town of Ay. When I checked the engine after our day’s run, I again saw diesel oil and coolant puddles in the bilge. I was not happy. 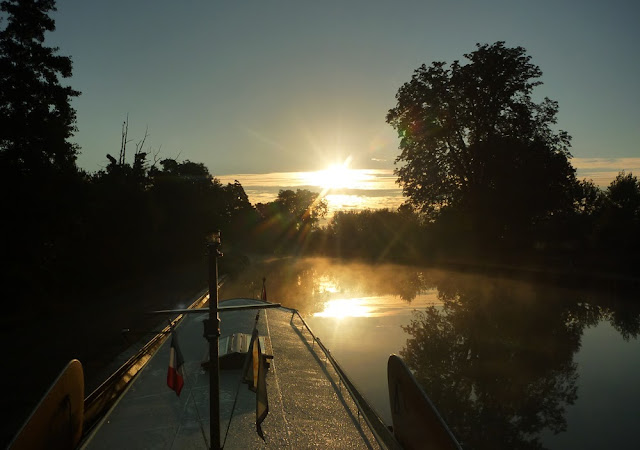 Sunday morning we arose to a world covered in heavy dew and the sun rising mists off the canal. 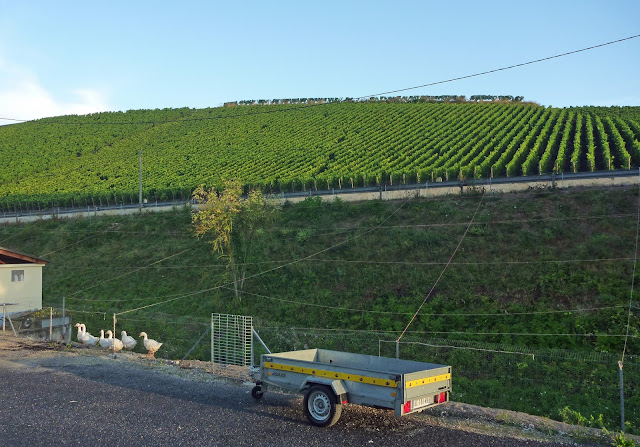 Beside us, next to the lock house the geese were warming themselves in the first rays of the sun, and above them on the slopes the grapes began another day of ripening. With only about two weeks until harvest, they need all the sun they can get. 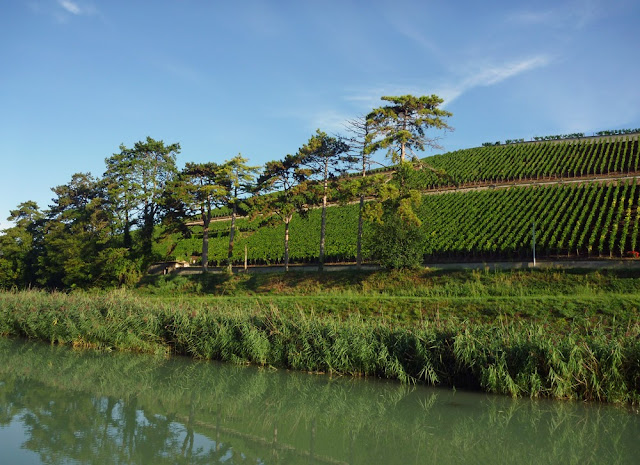 Edi had the diced bacon smelling wonderfully and was just about to add the eggs to the pan when Mme.l’éclusier arrived to ask us if we wanted to lock through. I told her we were getting ready for breakfast and were thinking of going through in half an hour. She said the lock wasn’t working properly and it needed help, but that she would be away for over an hour. I told Edi to turn the bacon off and hold the eggs. Within two minutes we were entering the lock. 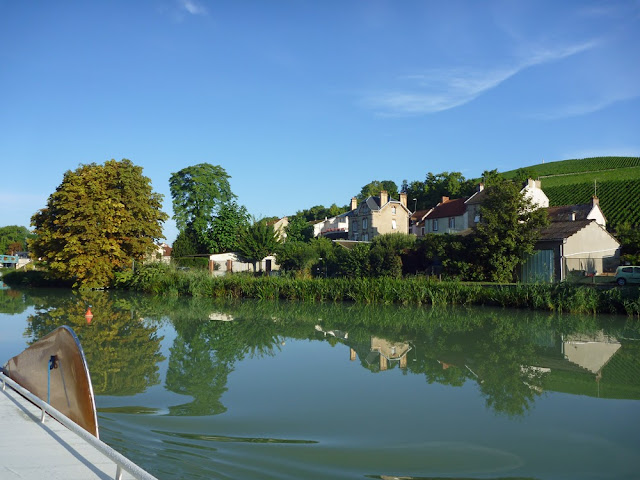 We passed through Mareiul-sur-Ay, and not tempted by the rather Dogpatch-looking moorings, we decided to continue on to Ay. From my visit here in 2004 in Lady Jane, I remembered a long quai in the centre of town, though I did recall very shallow water alongside. The new FluviaCarte showed the quai, but did not mention of the shallowness alongside. They left it to us to discover with our 0.95 metre draft. Fortunately, Zonder Zorg’s skeg is about 10 centimetres deeper than the tips of her propeller blades. 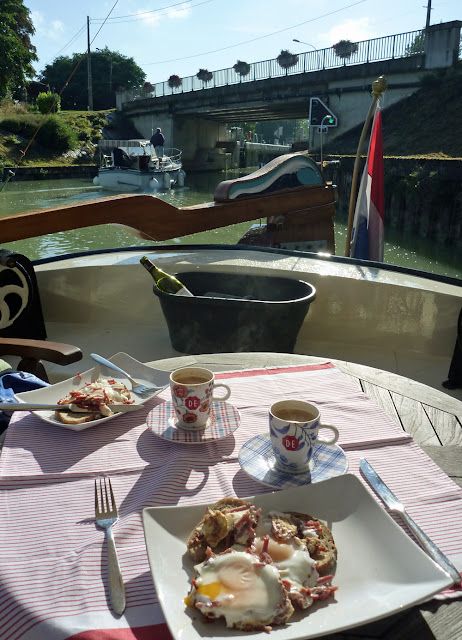 I easily poled off with a boathook, and we continued along to Écluse de Ay, which we passed through without any need of assistance. This automatic lock was working, though with its very slow emptying, we suspect there is a problem with the upstream paddles. We secured alongside the wall on the bollards just below the lock and Edi reheated the bacon, put on the eggs and I pulled some espressos. We had arrived in Ay.
Posted by Zonder Zorg at 08:17