Shortly after 1400 on Monday the 17th of September we arrived in Hoorn and secured to an end-berth in GrasHaven. We organized onboard and then walked up the floats past ten fingers of mostly occupied slips. The marina is a fully modern and very well maintained facility of 710 slips, and in the havenkantoor we checked-in and paid €49 for two nights including electricity, water and wifi. We asked for directions to a museum that would give us some background on the discovery of Cape Horn. 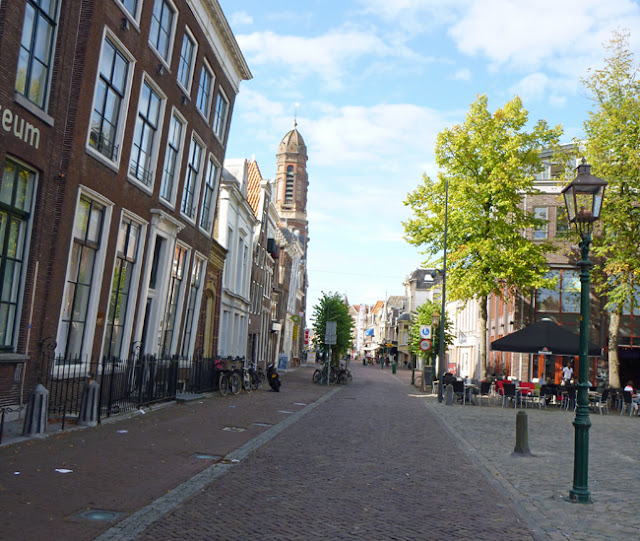 We continued ashore and followed the directions into the centre of town, where we found the Westfries Museum. Actually, it appeared to be leaning out to greet us as we approached; one certainly gets a different slant on architecture around here. We used our passes to gain admission to the museum and searched in vain for any mention of the connection to Cape Horn. The displays are mostly inward looking depictions of life in the town, with very little on the far-reaching exploits of its former citizens, whose activities included the discovery of Cape Horn and the running of the East India Company. 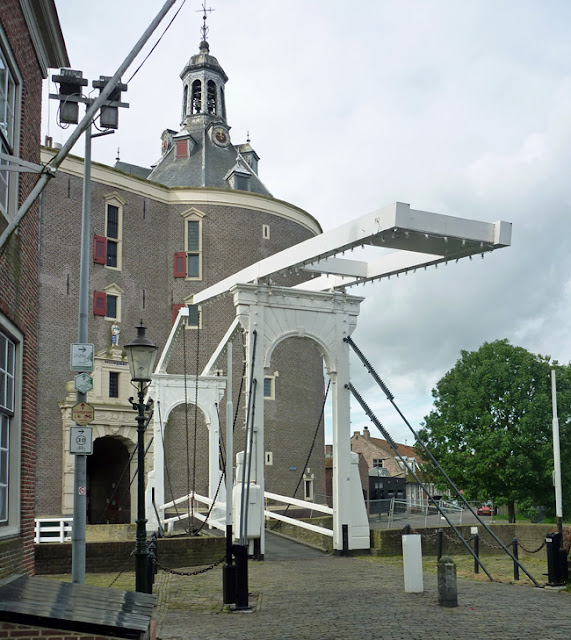 On Tuesday morning we walked to the train station and bought return tickets for €4.40 each for the twenty-one minute trip to Enkhuizen. From the Enkhuizen station we walked past the fortified tower, the Drommedaris, which was built in 1540 and then we continued through the old town to the canal and along it to the Zuiderzeemuseum, which is housed in a string of seventeenth century buildings that were once East India Company warehouses. 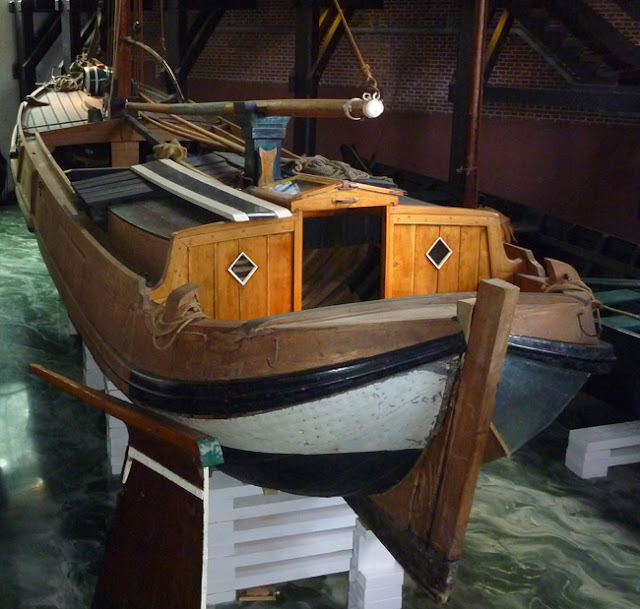 Our museum passes gave us entry and soon we were in the schepenhal and examining the collection of wooden boats packed like sardines into the fifteen metre high room. Although in the photos they look like models, they are beautifully preserved, full-sized vessels. 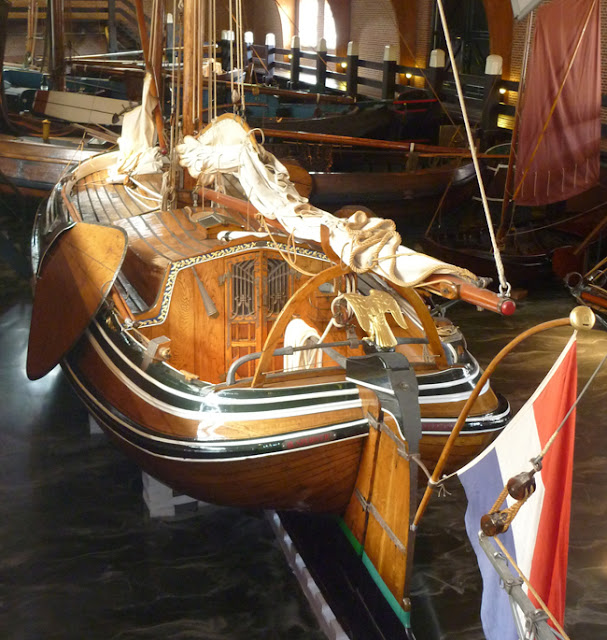 Viewing is from floor-level, beneath the boats, from a deck-level balcony and from a balcony at mid-mast height. The collection consists of both workboats and yachts. There is a Fresian bol, two tjotters, fishing boats, including a Marken smack and one similar to the kwaks we saw in Volendam. There is a small tjalk, which appears to be a predecessor of the skûtsje. 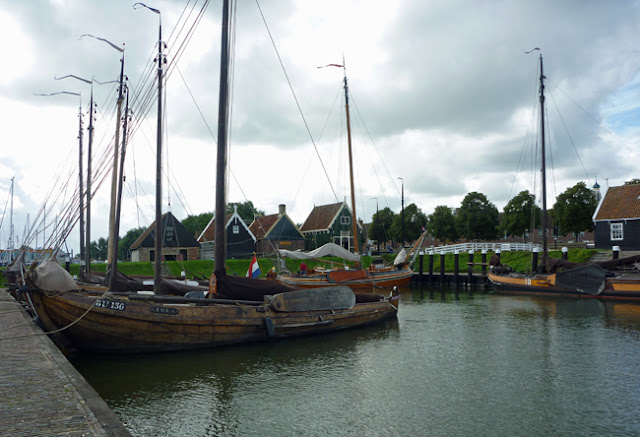 From the indoor exhibits, we headed out, across the street and along the dike to the entrance of the outdoor museum. This begins with a recreation of a fishing harbour, modelled on the one in Marken. In the harbour is a wonderful collection of boats dating back nearly a century and a half. 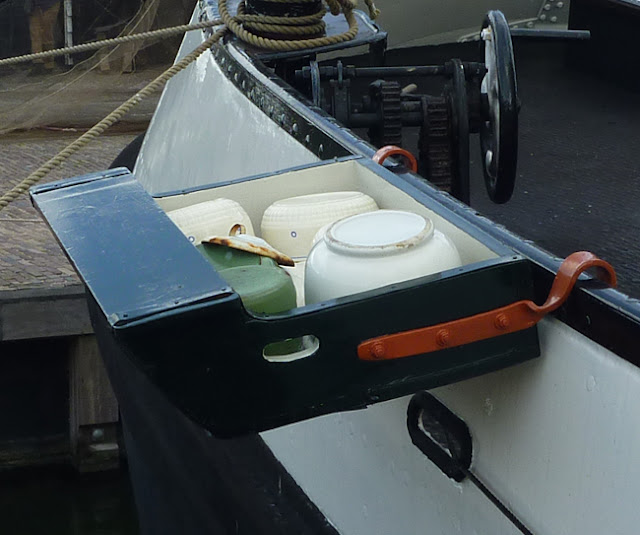 I had promised Edi that among the things that would be included in our skûtsje's renovated galley is a dishwasher. I showed her one hanging on the quarter gunwale of a tjalk in the harbour, but she said that she wanted one a tad more modern.

One of the things we were looking for among the exhibits is Hoop op Zegen, the skûtsje built in 1904 by Wildschut in Gaastmeer. Along with our Nieuwe Zorg, it is one of the fourteen known survivors of the twenty skûtsjes built by Wildschut. It was not in the schepenhall and the ladies at the desk knew nothing about it. It wasn't in the fishing harbour, nor did anyone there know where it might be. 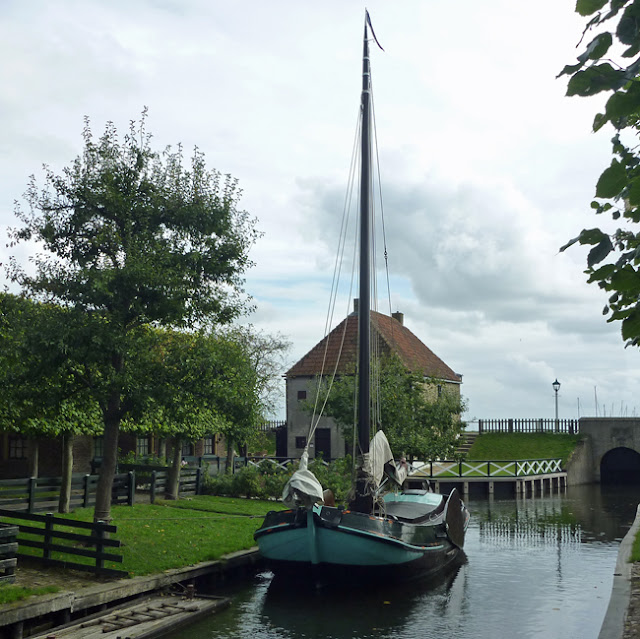 A man at the net-mending hut told us of a small tjalk on one of the canals in the recreated town. The town is divided into several districts, each a reconstruction using original spacial planning and layout from various towns and villages around the Zuiderzee. Hindeloopen is the model for the church district, the polder slope is modelled after Urk, a former island in the Zuiderzee. The town canal in the museum village is on one side modelled on Noord Holland styles, while the other side depicts the Friesland style. The Noord Holland side is an urban depiction with a row of merchants' shops; apotheek, slager, bakker, kaaswinkel and so on. The Fries side is a more rural depiction with houses set back from canalside gardens. In front of one of the houses sits a small skûtsje. 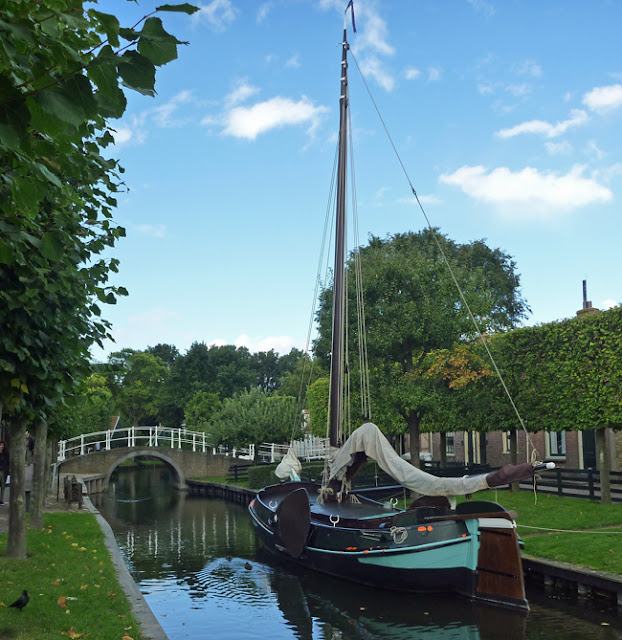 We immediately saw similarities to our Nieuwe Zorg that told us this vessel had been built by Wildschut.

The more we looked, the more convinced we were. 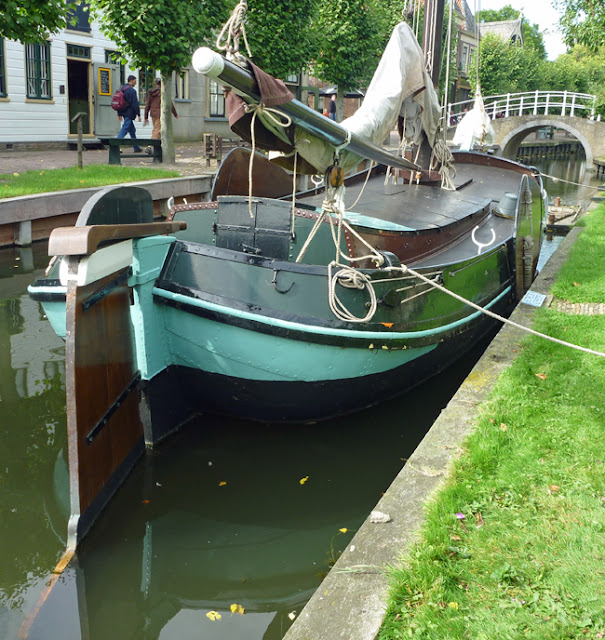 On the Noord Holland side of the canal, directly across from the skûtsje sits an elegant house. We went in and asked the museum hostess about the boat. We told her we were searching for a skûtsje built by Wildschut in Gaastmeer in 1904. We added that the internet had informed us that it is on display in the museum and that we were at the end of our line, having not found it in the ship hall nor in the fishing harbour. She told us no, the boat out there is an old fishing boat from the Zuiderzee and that it spent a long time there and then came here. We shrugged and wandered around in the elegant rooms looking at the architecture and fine furnishings. Then Edi overheard the hostess speaking in Dutch to the next people in the door, ridiculing us by saying that we were looking for a boat that doesn't exist that we had found on the internet. Edi decided it was not yet time to inform the woman that she speaks Dutch. 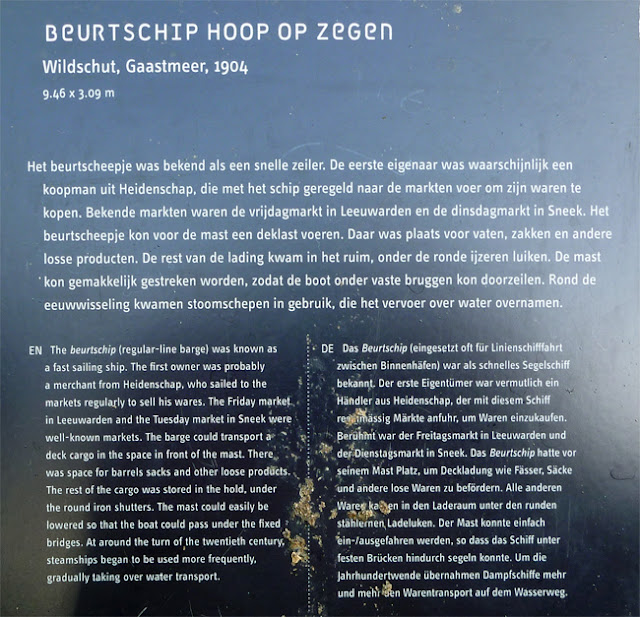 We finished viewing the displays in the house and went back out to the canal. There, almost directly in front of the house we spotted a small placard on a stake. Clearly printed on the panel is Wildschut, Gaastmeer 1904. While only 35 centimetres narrower than Nieuwe Zorg, Hoop op Zegen is nearly seven metres shorter, and is the smallest of the twenty skûtsjes built by Wildschut. Edi decided it was time to inform the tall skinny hostess in the house of her fluency in Dutch. 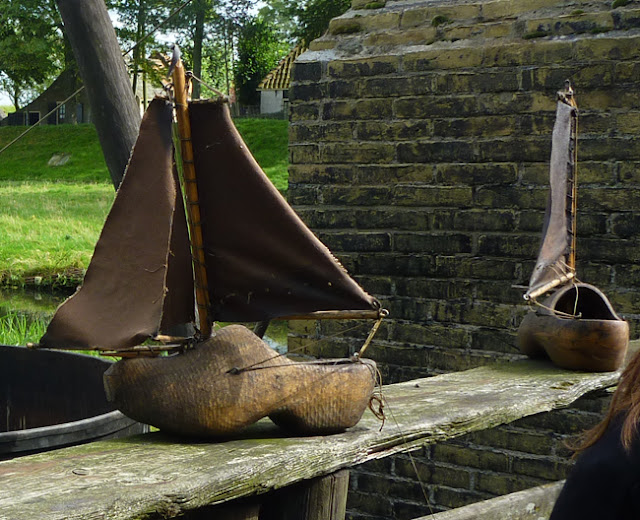 Besides the skûtsje, we also spotted other sailing clogs. These were on a bench where we paused to buy a couple of smoked kippers. The fish were very oily and they continued to repeat for a long time after we had finished eating them. We decided that they were otherwise not a repeat. 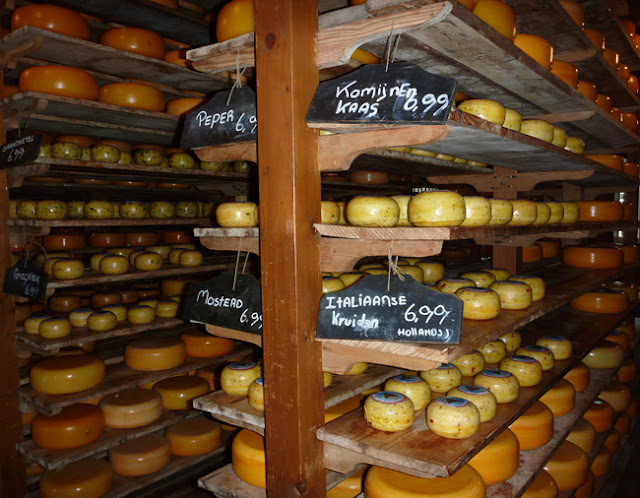 Among the fascinating things about the Zuiderzeemuseum is that craftsman, artisans and other interesting and display-related people participate in the museum. Cheese is available for purchase in the cheese shop, smoked eel and herring are available at the smoking demonstration, handmade brushes and brooms are for sale by the maker in his old-fashioned shop, the sailmaker can be commissioned to handmake a new sail or mend an old one and his working becomes part of the museum exhibit.

It was late afternoon by the time we had finished our tour around the museum park. We walked back into the centre of town and paused at Vishandel van der Veen and sat on their canalside patio enjoying delicious broodje scholfilet en koffie. The sole was so good that on the way out we bought two fresh filets for dinner the next day.

The train took us easily back to Hoorn and we paused at a book shop on our walk through town to buy a new ANWB Wateratlas for Friesland. While Henk and Madij had handed over Nieuwe Zorg with a complete chart kit for the Netherlands, Belgium and most of northern France, many of the charts date back one or two decades. We plan to spend some time exploring the waterways of Friesland, so an up-to-date chart is essential, and we saw that a compact chart book would be easier to handle than the traditional large folding charts.

Back onboard Nieuwe Zorg in GrasHaven, we reflected on our day. We had been totally enthralled by the Zuiderzeemuseum and we easily declare it among the very finest museum experiences either of us have ever had.
Posted by Zonder Zorg at 11:10