We had returned to Vancouver on 28 July from our shopping trip to the Netherlands, where we had found and contracted to purchase a 1908 skûtsje. Except for our impatience to return to the Netherlands, we enjoyed a wonderful August in Vancouver; it was mostly clear and warm with only one short rainy period. To ease our impatience, we hosted four dinner parties for family and for sailing friends, and we went on a weekend boating rendezvous to Keats Island with the Vancouver Power and Sail Squadron. 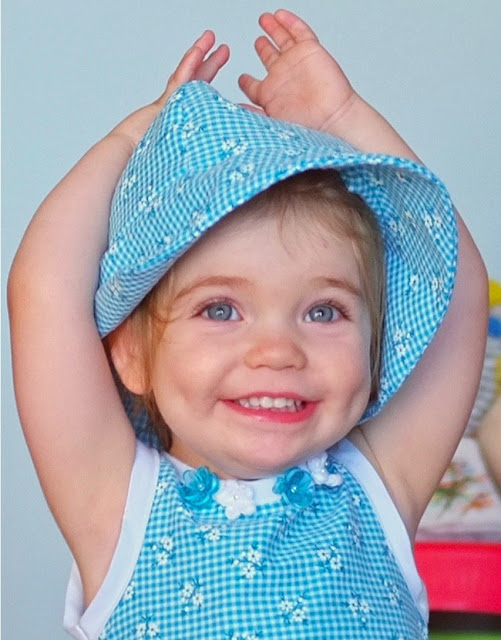 Bram and Amy brought our granddaughter, Annelies over several evenings so that she could play in our rooftop sandbox. At twenty-two months she is beginning to talk. She shows a very quick grasp of concepts and easily modifies and extrapolates activity and discoveries into new directions, so she is delightful to play with. 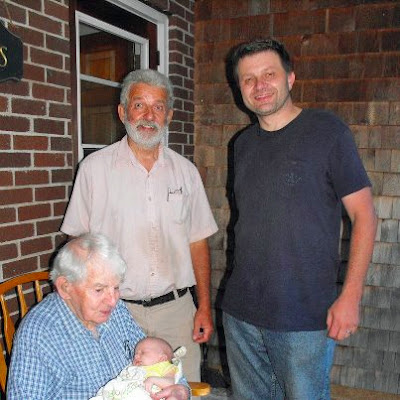 In early August, my nephew Andrew and his wife Sarah added another member to the family. I received a wonderful photo of my new grand nephew Emery, my nephew Andrew, my brother Peter and my father Gerald. Four generations of Walsh boys from a few weeks to 98 years old.

Toward the end of August, we wired the balance of our skûtsje’s purchase price to the yacht broker’s trust account in Enkhuizen, and at the same time, we wired the insurance premium to the agent. With all the purchase details taken care of, we began organizing our return to the boat in Aalsmeer, Netherlands. Although Aalsmeer is at the end of the runways of Amsterdam’s Schiphol Airport, Air Canada does not fly there. They do; however, fly to Brussels, only 205 kilometres from Aalsmeer. All the flights to Brussels were overbooked at the end of August; however, on the Tuesday after Labour Day there were flights with many open seats, so short notice booking on our choice of them was easy. There is something about Tuesday and Belgium. Edi booked flights to Brussels via Montreal for the 5th of September and I reserved a car to get us from the airport to Aalsmeer and to use during the first few days for shopping after we arrive. 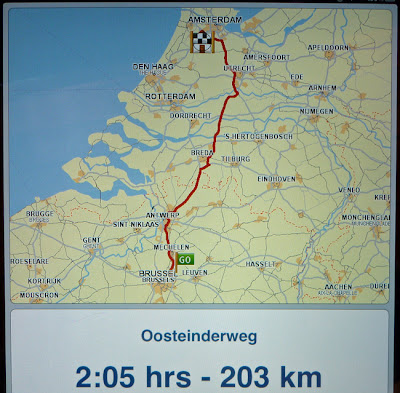 When I was reserving the car, I clicked the GPS option and was shocked to see that even with my Hertz #1 Club Gold, which still triggers Air Canada Elite discounts from a former life, the GPS charge from Brussels for the four days came to just over €70, including taxes. I decided to look at options. When we were in the Netherlands in July, everyone referred to TomTom when talking of driving or walking directions. Online in the Apple App Store I found TomTom with maps for all of Western Europe for my iPad for $89.99, about €72.50. 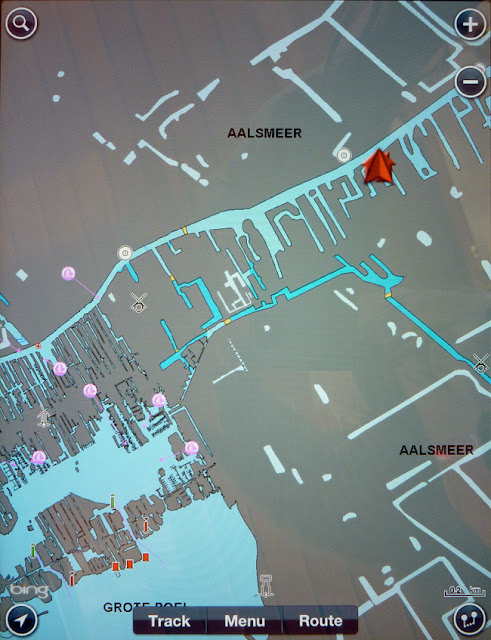 While I was in the online App Store, I decided to look at Navionics charts for Europe to see if there is coverage of the inland waterways. We had been delighted with the quality of the Navionics charts for iPad and they became a very important adjunct to our chart-plotter aboard Sequitur as we navigated from La Punta Peru southward along the Chilean coast, through the archipelagos of Patagonia and Tierra del Fuego, around Cape Horn and up the eastern coasts of the Americas. Many times the iPad was our primary source of navigational information. I found the Navionics Europe HD application for $64.99, and some quick investigation showed me that the lakes, rivers and canals are all charted. I downloaded a copy to my iPad.

We each packed a piece of checked luggage at 22.5 kilos and balanced our four carryon pieces at exactly 10 kilos each. The total of 85 kilos is much less than the 224 kilos we lugged back from St Augustine when we had left Sequitur two months previously. However, our current trip is planned for only five weeks, sufficient time to take possession, move aboard and become familiar with the skûtsje as we slowly take her from Aalsmeer, North Holland to Harlingen, Friesland for her facelift.

On Tuesday morning we wheeled our luggage the two blocks to the SkyTrain station and rode to the airport. Because of a late arrival of the inbound plane, our flight was delayed leaving Vancouver, and we had run to make the connection in Montreal. Of course, our Vancouver flight arrived at one end of the terminal and the Brussels flight departed from the other end. Fortunately, Trudeau Airport is rather compact, so the run was not so bad. 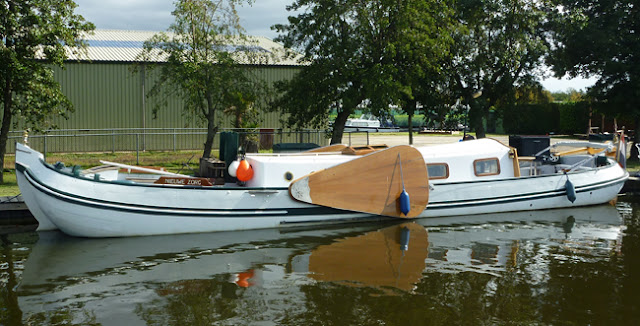 Customs and Immigration in Brussels were a snap, our luggage had made the tight connection and our car was waiting for us at the Hertz gold counter. The TomTom worked well on my iPad, and shortly before noon, we arrived at the marina in Aalsmeer. Henk was aboard Nieuwe Zorg ready for our noon appointment. During the past few weeks he had completed the work arising from the survey, which included mounting the leeboards. They look wonderful. 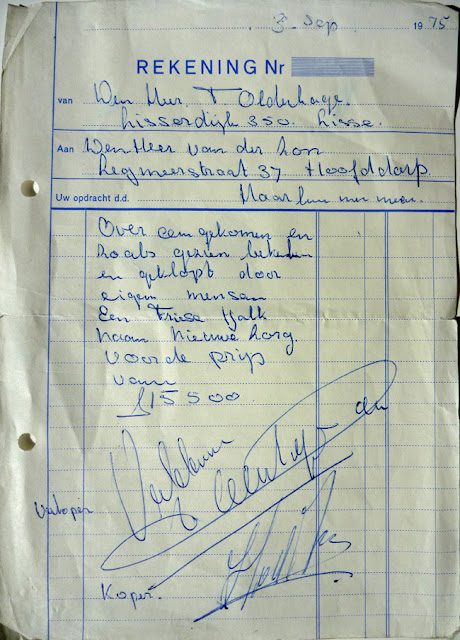 We did a walkthrough and a systems familiarization, and then we signed the transfer papers, formally taking possession. With the skûtsje came a sheaf of papers, including the bill of sale from 1975, when Henk had purchased Nieuwe Zorg. The price he paid was 15,500 Dutch guilders, about $5950 Canadian at the time. 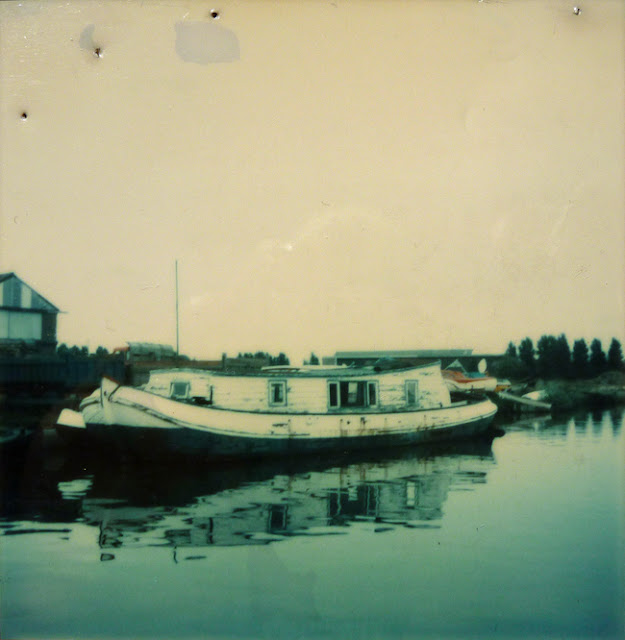 Henk also gave us a Polaroid photo showing the state of the skûtsje when he bought it. It had been unattractively converted into a woonboot, the Dutch term for houseboat, and it was by that time rather dilapidated. As crude as the conversion was, it had at least saved the skûtsje from being cutup for scrap. 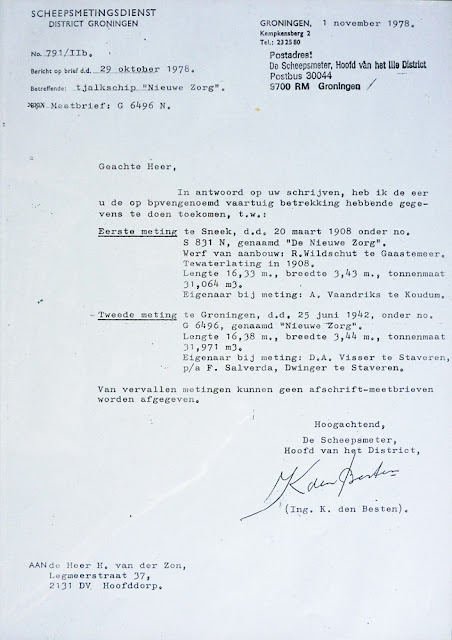 Also among the papers was a meetbrief, or ship registration document dated 29 October 1978. It shows an entry from the registration journals of Sneek with details of the first measurement done on 20 March 1908 of a skûtsje named De Nieuwe Zorg built by R. Wildschut in Gaastmeer for A. Vaandriks of Koudum. A second measurement is detailed from the Groningen journals on 25 June 1942, with the name shortened to Nieuwe Zorg and her owner listed as D.A. Visser of Staveren. The 1978 document shows H. van der Zon of Hoofhorp as the owner. We are missing the history of our skûtsje for the years between 1942 when she was remeasured for Douwe Albert Visser and 1975 when she was purchased by Henk van der Zon from T. Olderhage of Lisse. This will hopefully soon change; we have recently been contacted by the great-granddaughter of Douwe Albert Visser, and she will be seeking details from her father. 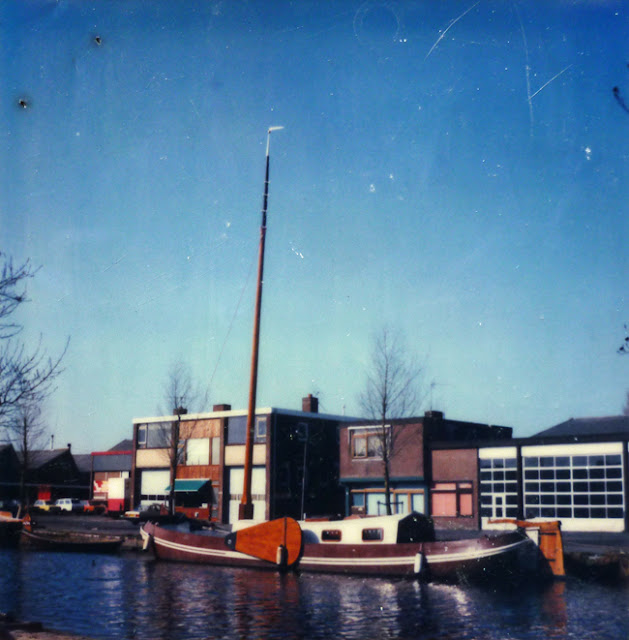 Also included in the documents given to us by Henk is a Polaroid photo of Nieuwe Zorg taken in 1983 after he had removed the dilapidated houseboat structure, added a graceful jachtenroef and restored her sailing rig. Henk and his wife Madij continued to upgrade and refine their prized skûtsje for over a third of a century. Their attention to detail, their care and their pride were all so obvious from the moment we first saw Nieuwe Zorg. She took possession of us, and now we had reciprocated.
Posted by Zonder Zorg at 00:24

Email ThisBlogThis!Share to TwitterShare to FacebookShare to Pinterest
Location: Aalsmeerderdijk 204, 1436 Aalsmeerderbrug, The Netherlands