In late July, after we had contracted the purchase of Nieuwe Zorg, we had encouraged Henk and Madij to take her out cruising during the five weeks until the completion date. They had spent three weeks cruising with their extended family, during which time Henk must have spent many hours maintaining and fine-tuning the skûtsje; she was in even better condition than when we had left her after the survey. 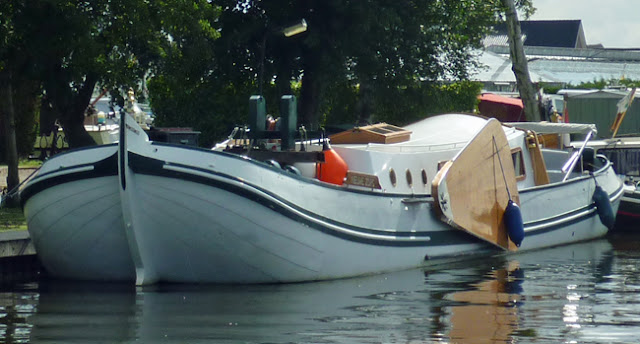 On the 5th of September, after we had all signed the formal deed of transfer, Edi and I took possession of Nieuwe Zorg. We then spent a delightful couple of hours with Henk learning the idiosyncrasies of the vessel's systems and listening to stories from their thirty-seven years of restoring, upgrading, maintaining and enjoying this wonderful historic skûtsje.

After Henk left, Edi and I lay down for a nap to try to catch-up from having been up and travelling for over twenty-four hours; we also needed to start adjusting to the eight hour timezone change. We were expecting Lex and Klaas from Scheepsreparatie Friesland to arrive onboard sometime in the early evening to discuss preliminary ideas for Nieuwe Zorg's refit and for her restoration to sailing.

Lex and Klaas arrived shortly before 1800, waking me from my slumber on the saloon couch as they arrived. We showed them through the skûtsje and threw ideas around with them for the better part of two hours. They took measurements, made notes, did calculations and we all scratched our heads and pondered the possibilities. They left with a good idea of what we wanted and a better understanding of how to achieve it than they had gleaned from the emailed list of items we had sent them a couple of weeks previously.

A little before 2000 we rushed off following directions on my iPad's TomTom to the closest Albert Hein for some groceries and cooking utensils. It was a smaller version of the huge Dutch supermarket chain, and they had no cooking utensils. From the store's information counter we were given the address of a much larger Albert Hein store in Amstelveen, which we punched into TomTom and allowed the program's mellow voice to lead us there. Their cooking equipment supply was limited, so I punched in Ikea's address in South Amsterdam and TomTom took us there with 45 minutes of shopping time left before the 2100 closing.

From Vancouver, we had brought sheets, pillow cases, duvet cover and towels, plus cutlery, stemware and our favourite coffee cups and saucers, so we needed everything else. As we hastened around the circuit, we loaded into our cart an assortment of pots and pans, cooking utensils, plates, bowls, pillows, a duvet and whatever else we could think of before the closing announcements began. We were back in the car with our load of goodies shortly before 2115 and following TomTom back to the larger Albert Hein. With a bit more than half an hour until closing, we set a more relaxing pace selecting sufficient groceries and supplies to settle us into living aboard until, after some much-needed rest, we could conduct a more organized laying-in of basic goods. 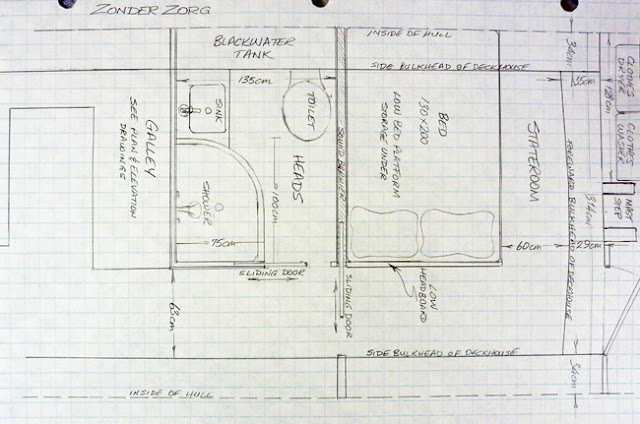 During the following days we alternately measured and remeasured spaces aboard, rested, went on shopping trips and drew preliminary layout plans for Nieuwe Zorg's interior makeover. As much as we love the craftsmanship and design of Nieuwe Zorg's interior, it is dated. It is a third of a century old, as are her systems and her construction technologies. Our intention is to totally strip-out her interior down to bare steel and start over. The makeover includes making the stateroom the full width of the hull, rather than two-thirds the width. Also, we want to move the shower to the centreline to take advantage of the higher headroom there. Because of the low curved roof, using sliding doors instead of hinged ones will make access to the stateroom and heads much easier. 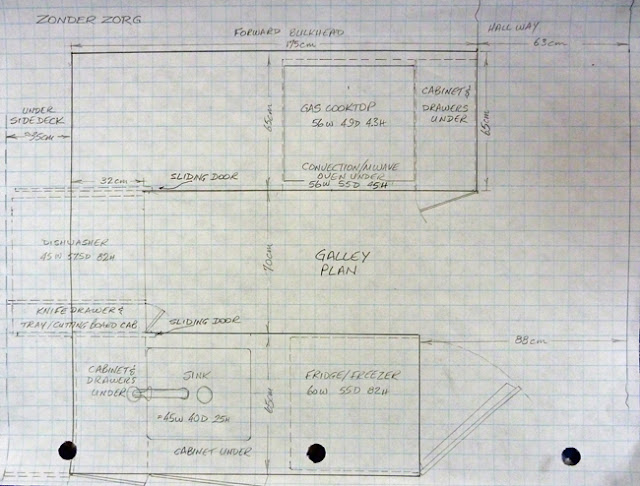 The current galley has extremely limited countertop space, the counter being mostly taken-up by the gas cooktop and the sink. We want to add an island to increase the countertop workspace and we are thinking of granite countertops. Under them we want a convection/microwave oven, a dishwasher and a fridge/freezer. Because of the easy and frequent availability of fresh produce along the inland waterways of Europe, we won't need the two fridges and two freezers we had in Sequitur; a single under-counter combo unit will be sufficient. 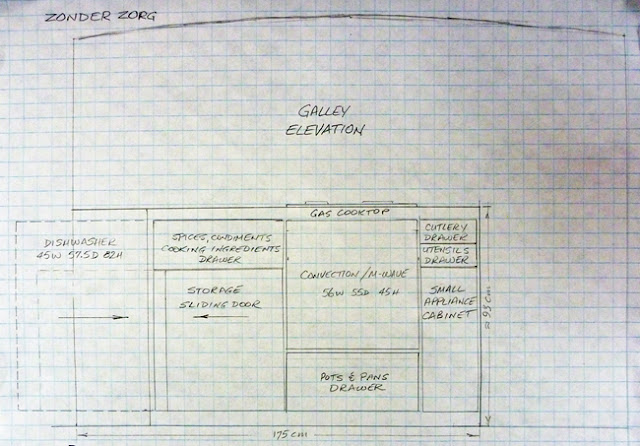 To make more convenient use of limited space in the galley, we are planning on using sliding doors in the cupboards on either side of the dishwasher. This will prevent door interference and will give quick and easy stowage access when unloading the machine. 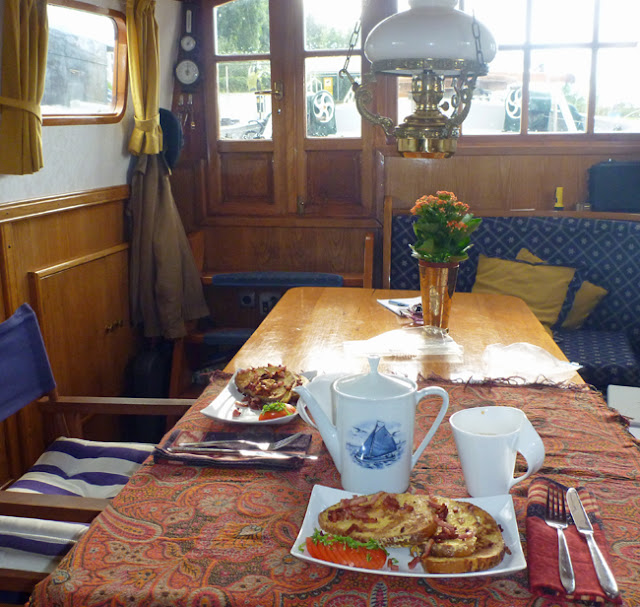 For breakfast on our third morning aboard, Edi prepared some pain perdu au jambon. We had settled-in quickly, and we began organizing for a slow trip northward to Harlingen, Friesland for Nieuwe Zorg's facelift. At 104 years of age, the old girl is past due for her hundred-year makeover.
Posted by Zonder Zorg at 01:48