We had arrived on the floats at Ponton d’Honeur in Bordeaux late morning on Tuesday, 10 June. Directly beside us was Port St-Caihau, through which lies the centre of the old city. 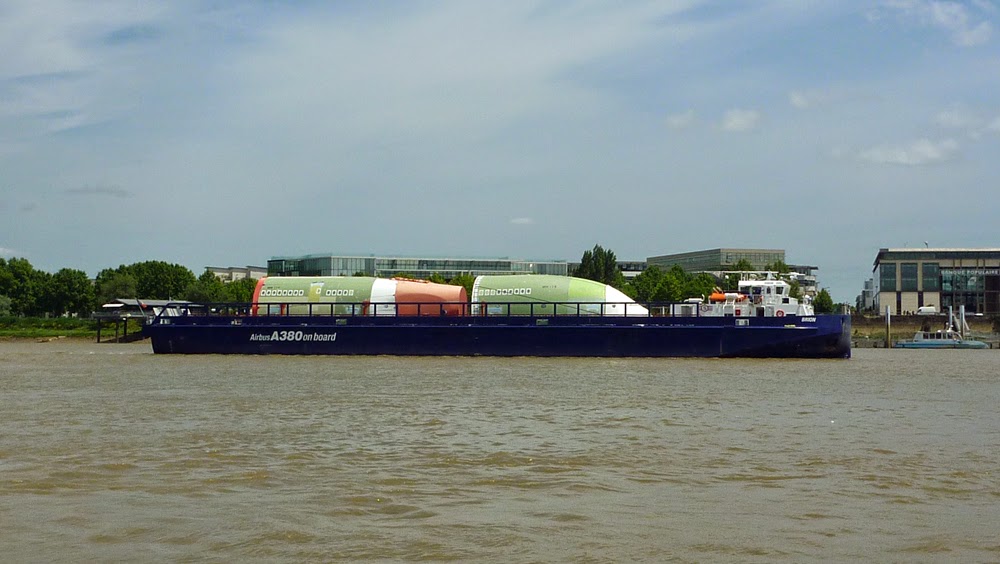 Two hours after we had secured on the float, the barge Brion arrived beside us on its way up the river with AirBus fuselage sections.

It sat stemming the current below Pont de Pierre, waiting for slack water so it could pass through and continue up to Langon. There is a strong current and turbulence around the arch bases until shortly before slack water. We had squirted through when we arrived.

Finally, after thirty-five minutes of treading water, it moved through the specially prepared centre arch of the bridge. It appears we had passed under the bridge more than two and a half hours before slack; no wonder it was rough. 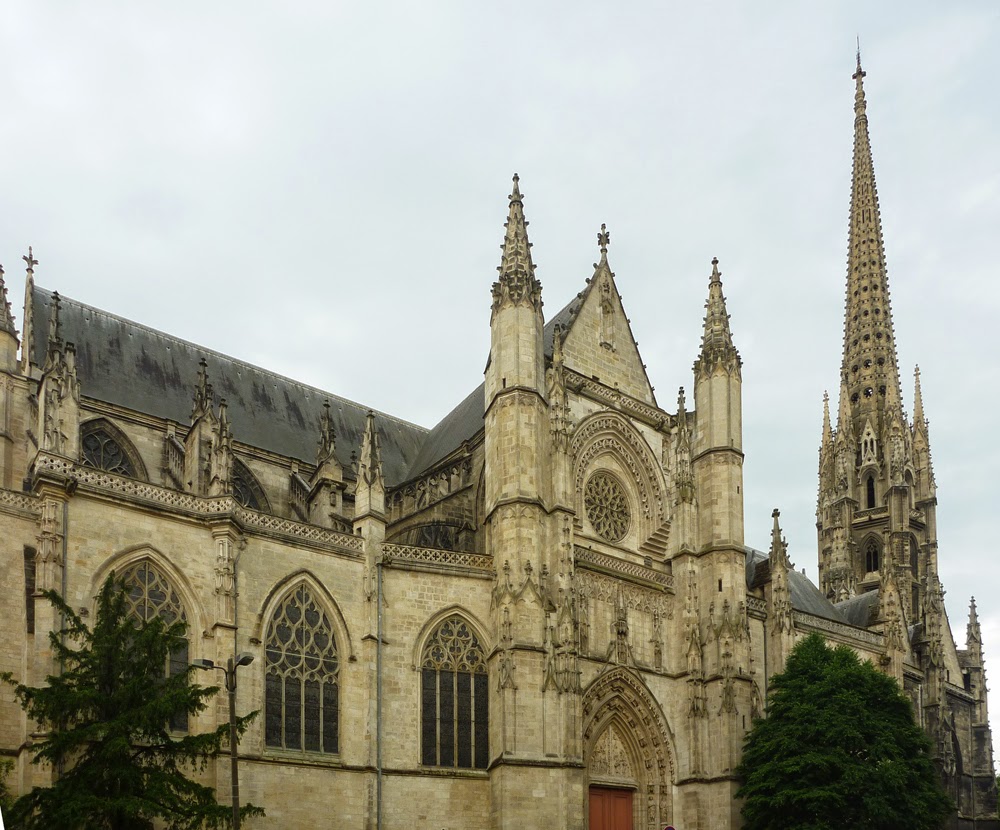 Our moorage on the float was also rough, contending with tides of over five metres and a twice daily tidal bore meeting the heavy seaward flow of la Garonne. There is a pair of mooring basins, les bassins à flot, downstream three kilometres and through a tidal lock, but we had received no replies from our emails and phone messages. We were stuck on the float in the currents and tides, where moorage cost €42 per night including water and electricity. 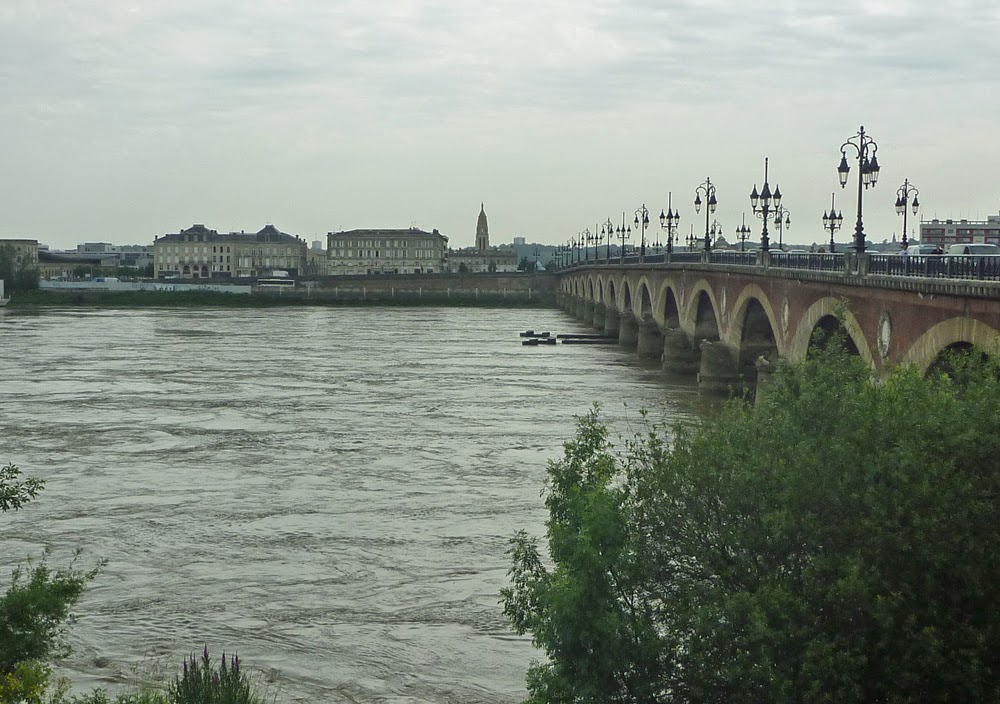 We had been thinking of heading up la Dordogne, but since it was nearing full moon, the heights of the tides and the mascarets, the tidal bores was increasing. This would make navigation more difficult, less safe and the moorings would be even more tenuous. Waiting on the expensive and uncomfortable float for more than a week for tides of lower amplitudes made little sense to us, so after an afternoon, an evening and a morning seeing the sights of Bordeaux, we decided to head back up river. 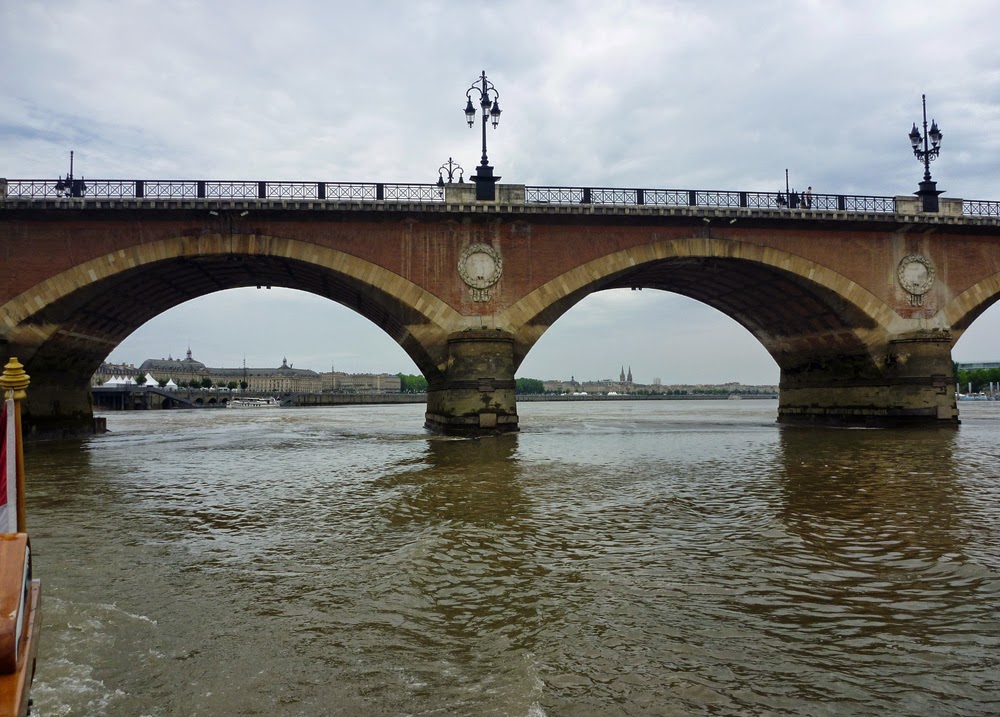 At 1400 on Wednesday we slipped from the float and headed back up toward the arches of Pont de Pierre. It was still a good half hour before slack, but I wanted to buck the slowing current for the first while to put us further upstream to use the push of the flooding tide before the river current overcame it. We selected the arch with the best looking current and punched through at 2400 rpm, having the constricted flow slow us to a near stop under the bridge. 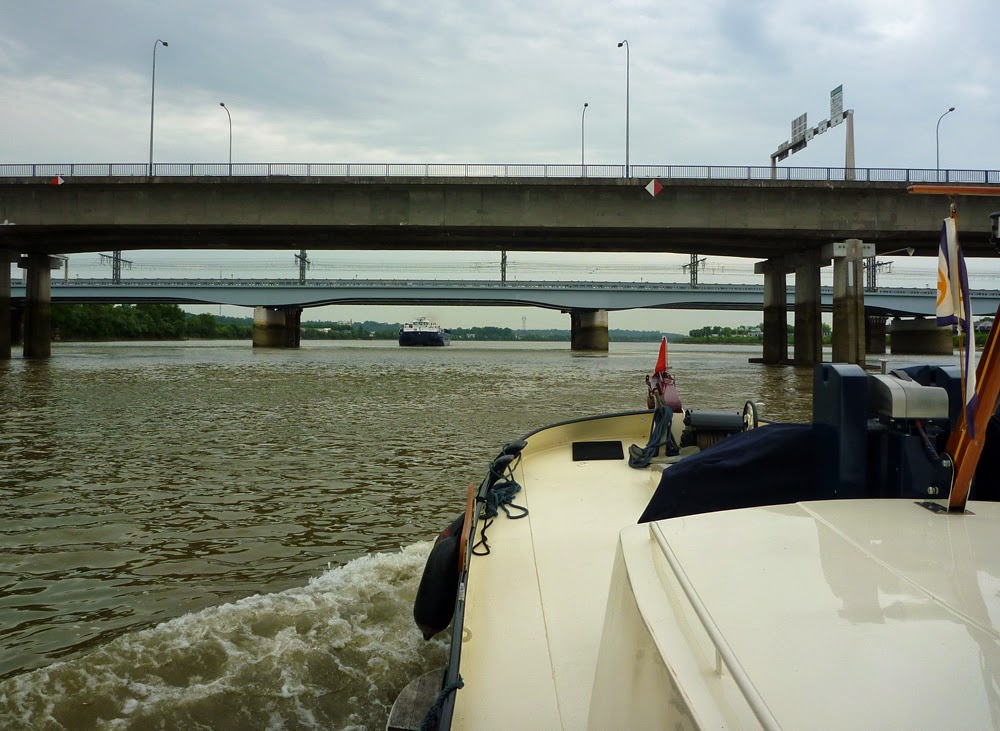 Upstream a kilometre is a set of three bridges, two road and one rail, with a navigational channel indicated by the red/white diamonds. Coming downstream was Brion, heading to fetch more fuselage pieces. I stayed on the outer edge of the marked channel, leaving seventy-five of the eighty metre width for Brion. She inexplicably veered toward us and crowded us out of the channel. 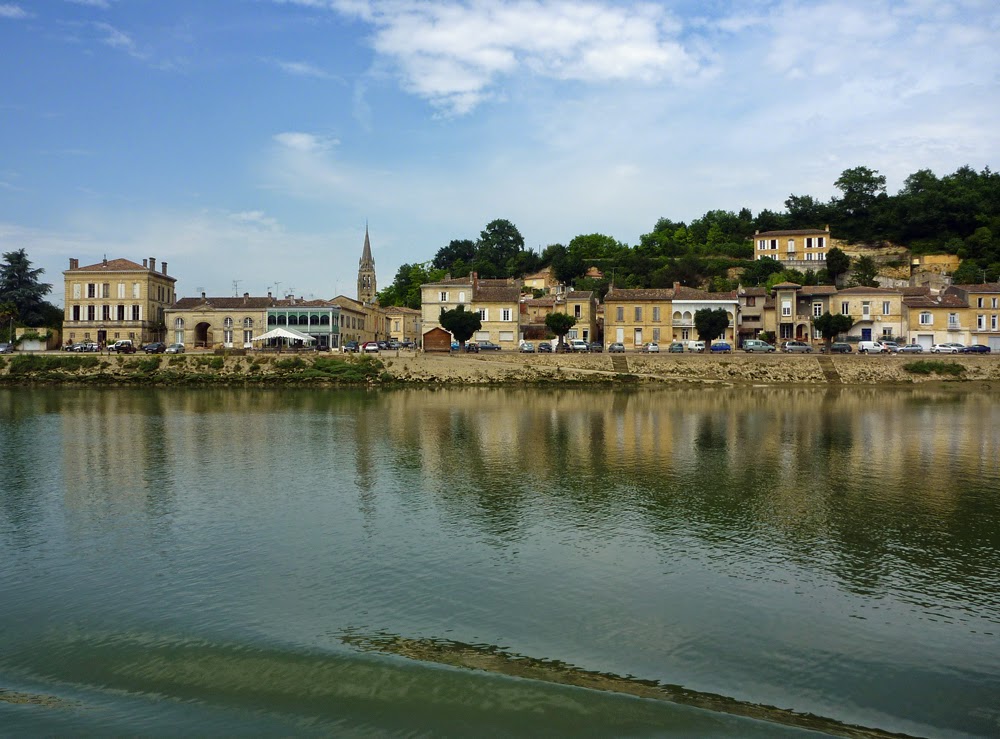 After nearly an hour we had lost the ebb current and began to feel the flood. By the time we were passing Langorian, twenty-two kilometres upstream from Bordeaux, we were moving along at better than 13 km/h. 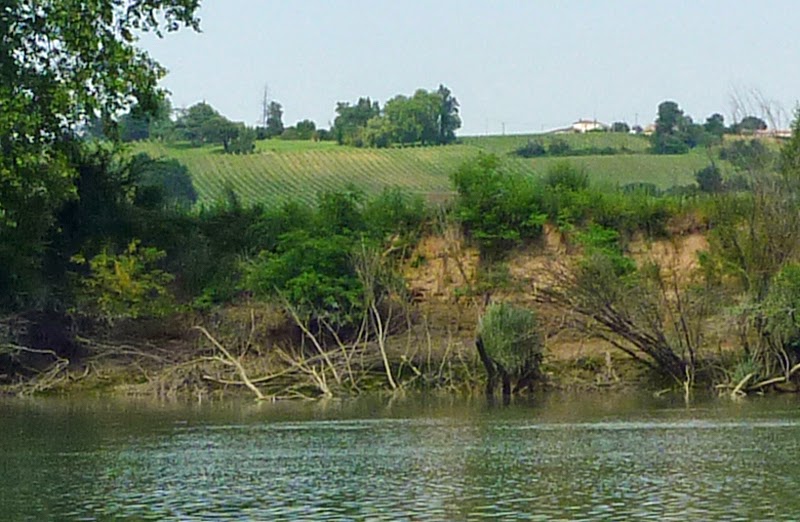 Upstream we passed the tailored corduroy slopes of  vineyards contrasted above the wild and ragged river banks. 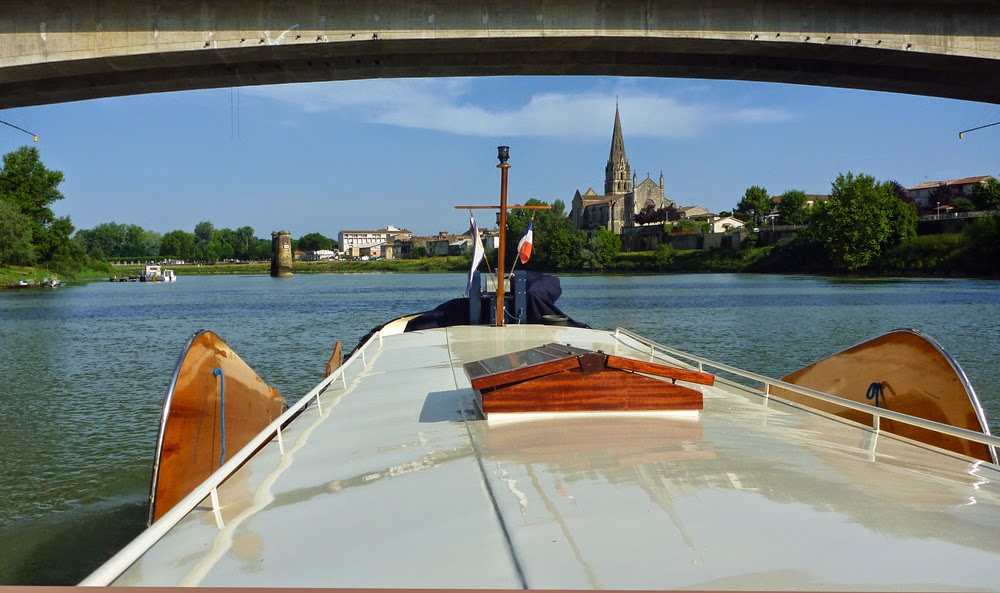 The sun was over our shoulders as we arrived in Langon and I called les éclusiers at Castets to advise them of our arrival at the lock. We were told the high water occurred after they closed for the day and that we would need to wait on the float until the morning tide. Both the paper and electronic tide tables we had showed this was not so; high water at the lock was within their working hours. However, this meant that locking us through would have entailed two or three minutes overtime. No further discussion was warranted. 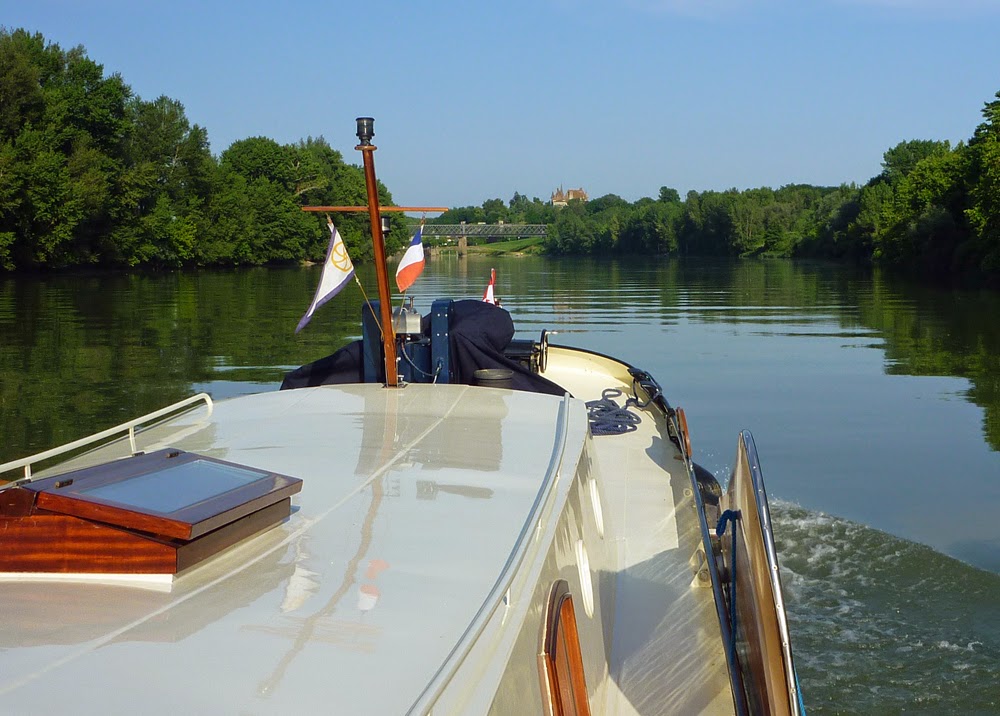 At the height of the tide an hour later, we secured on the float below the lock as les éclusiers spent their last twenty minutes idle before quitting time. 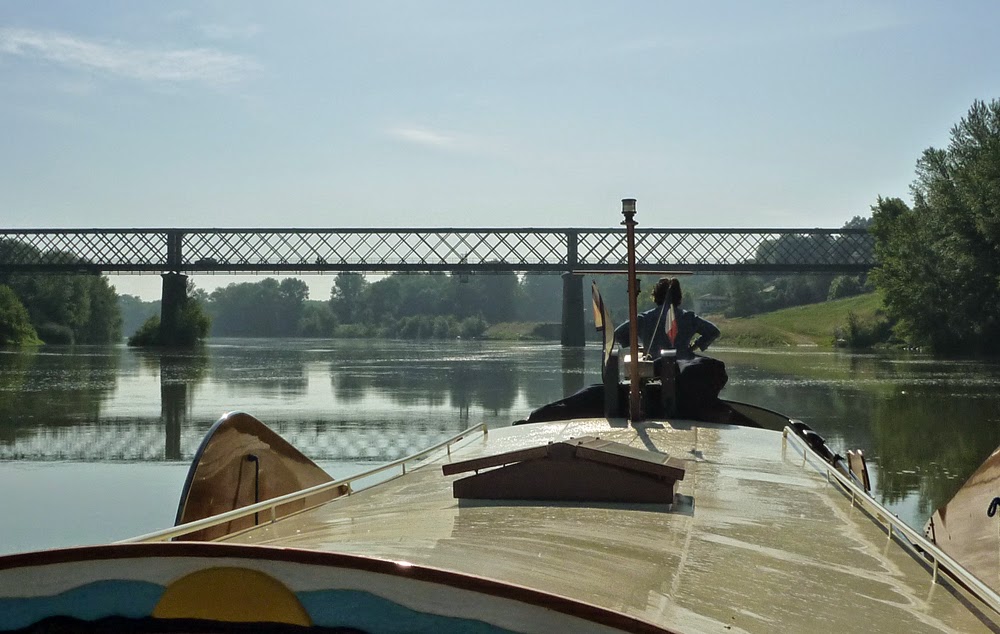 After a leisurely breakfast the following morning we slipped from the float, headed under the Eiffel bridge and into the lock. 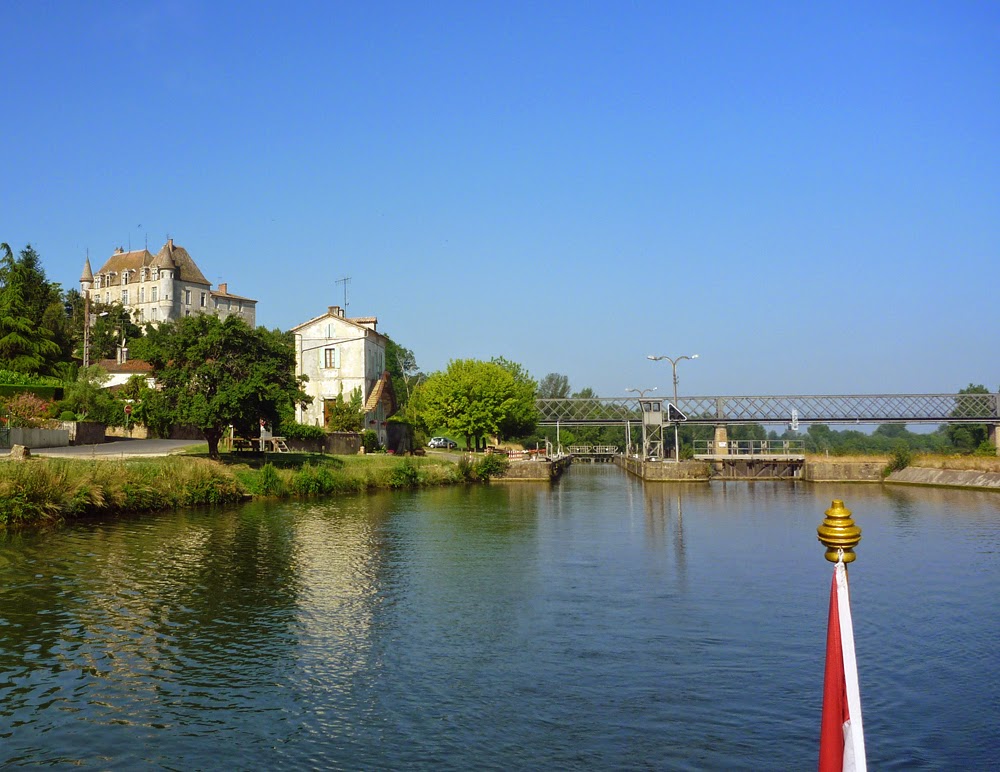 Within a quarter hour we were out of the river and back into le canal de Garonne with 52 up-bound locks and 193 kilometres to take us back to Toulouse. We decided not to stop in Castets, but to continue up canal to somewhere with a better work ethic. We joked that this might mean having to continue all the way across France and into Flanders or the Netherlands before we found such a place.
Posted by Zonder Zorg at 08:54