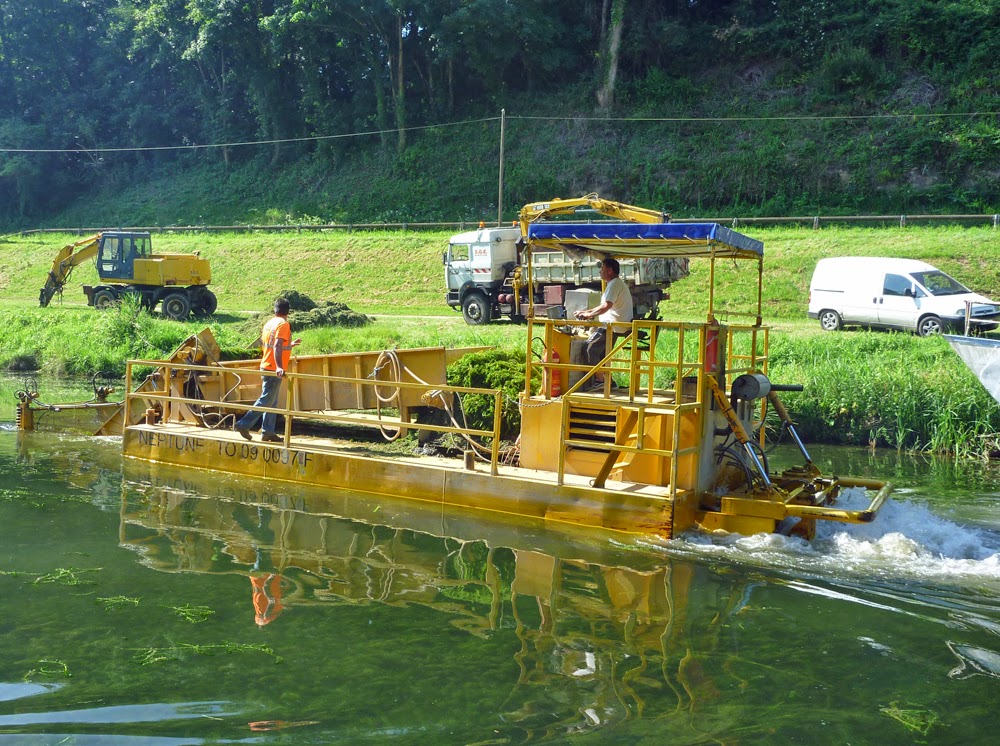 On Thursday, 12 June we had left le Garonne and re-entered le canal de Garonne. Ahead  of us was a climb of 132 metres through 52 locks spread over 193 kilometres that would take us back to Toulouse. The transit of the basin above the second lock was much easier than on our descent a few days earlier. A weed cutter had been operating in the pound for two days and had already cut a clear channel through heavy bottom growth. 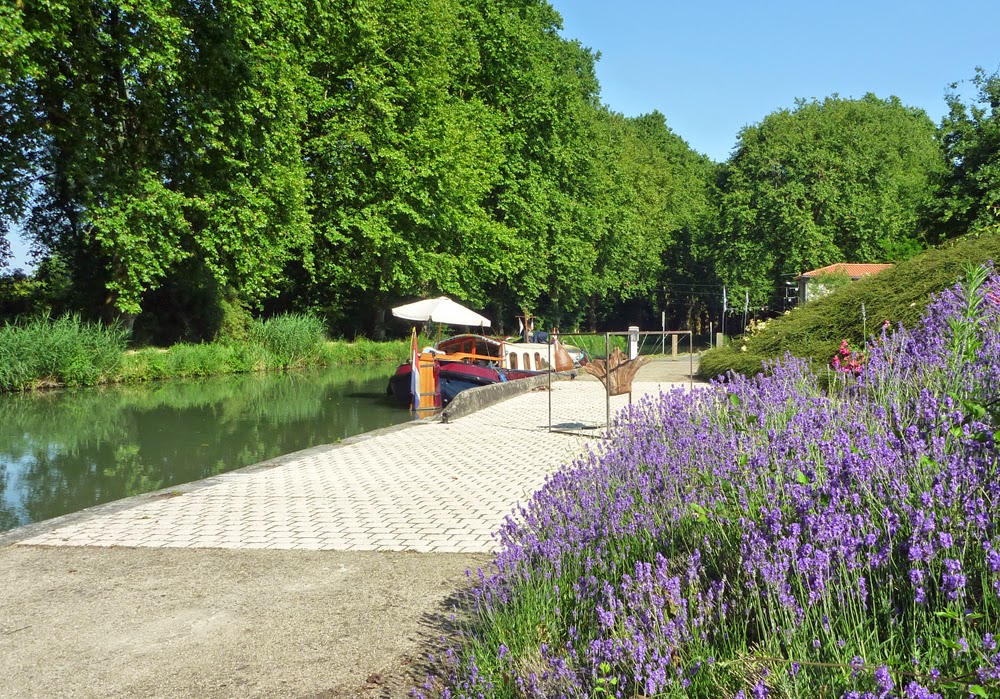 We quickly got into the routine of up-bound locks and by 1700 had we had passed through eleven locks and travelled 39.4 kilometres to Mas d’Agenais. We secured to a very fine wharf with solid bollards in a clean, attractive setting with no moorage fee. 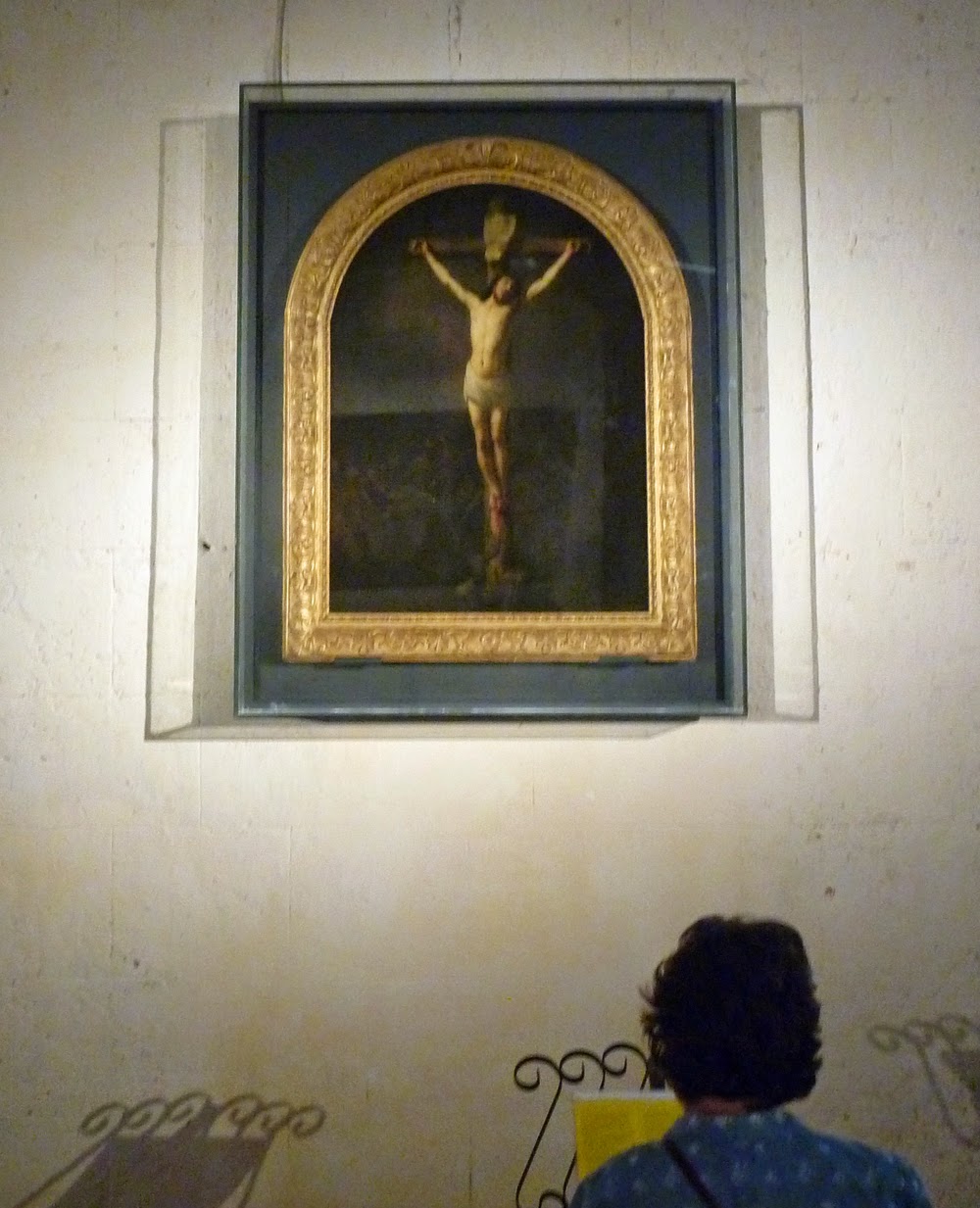 We had pushed onward without pause because we wanted to visit église Saint-Vincent and see its Rembrandt painting. The eleventh and twelfth century church a listed national monument and for some unfathomable reason it is closed on weekends. We had missed it on our way down the canal the previous Saturday. After breakfast on Friday morning we walked up the steep hill to the church and inside behind armored glass we saw the painting. Besides a cleaning lady, we were the only people in the church. 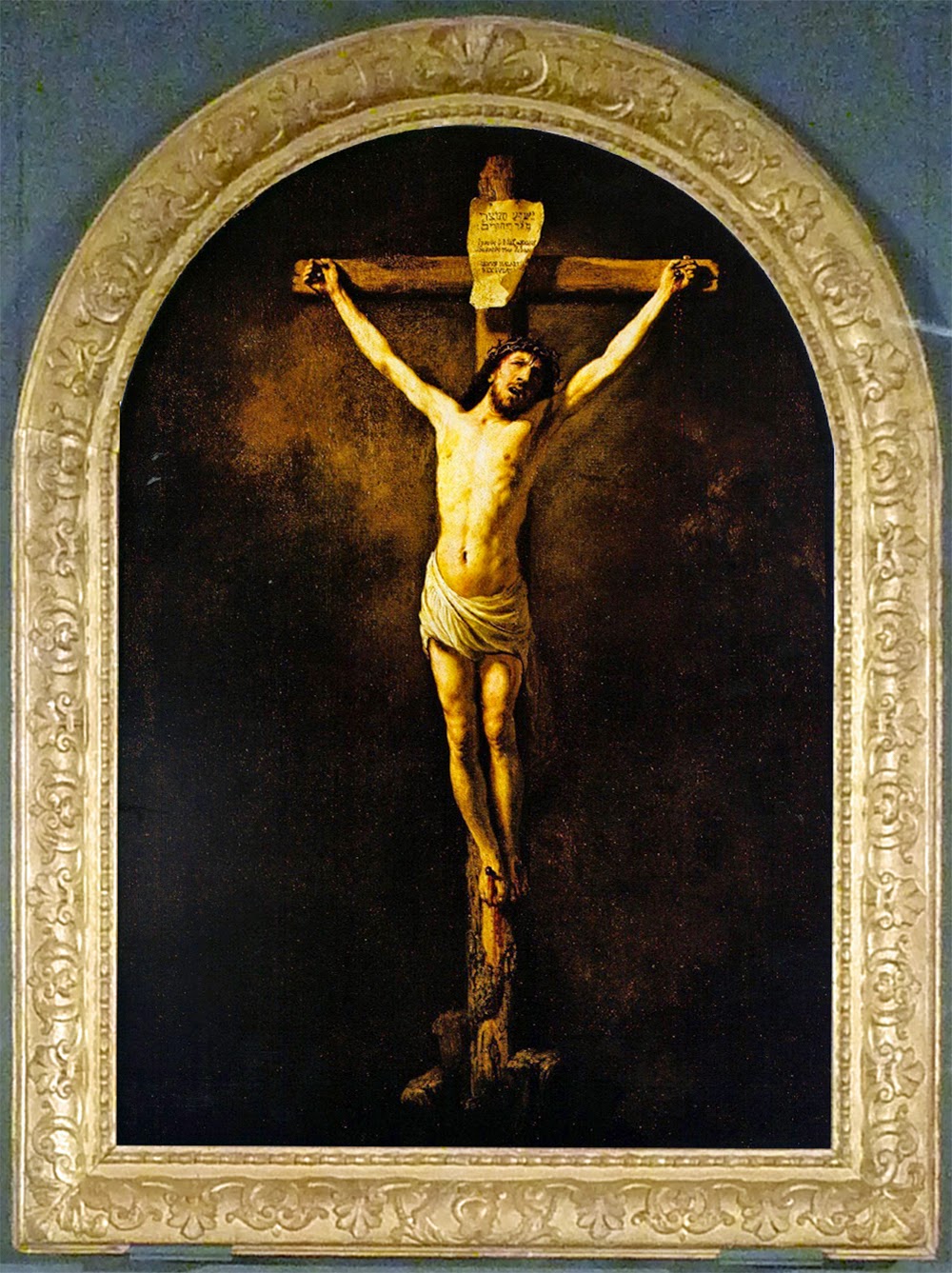 The painting was done in 1631 as part of a series of eight commissioned by Prince Frederik Hendrik of the Hague to decorate his daughter’s chapel. Six of the series are now in the Pinocotheque in Munich and the remaining piece is known only by a copy in the museum in Brunswick. The Crucifixion arrived in the church as a donation from the Dufour family a generation after they had left their native Mas d’Agenais for Dunkerque. They had bought the painting in a public auction in 1804 and gave it to the church in thanks. Rembrandt’s depiction revolutionized the traditional representation of the Christ crucifixion. It was classified as an Historic Monument in 1918, and in 1959 after much debate on its authenticity, it was sent to the Louvre, authenticated and restored. 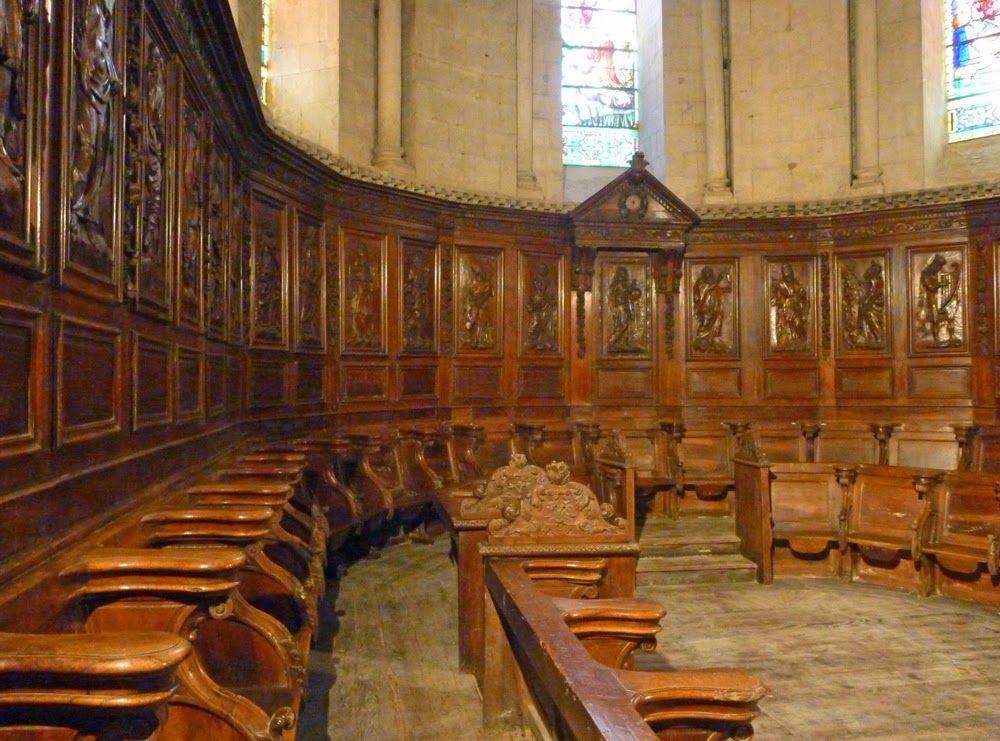 The cleaning lady appeared to be the custodian and she obviously had great interest in the contents of the church. She eagerly showed us around the church to point out other treasures and pulling back heavy drapes and moving a barrier enabling us to enter the beautifully carved choir. 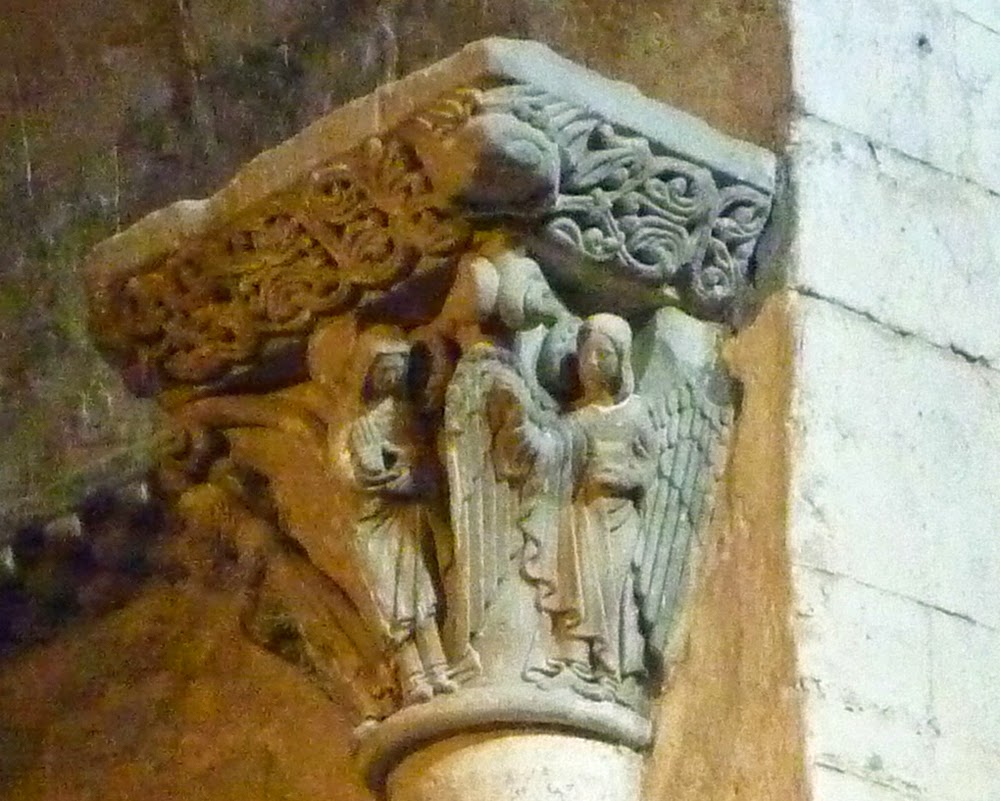 She pointed-out sculptures and carvings, including a carved stone capital displayed high on a wall. It is thought to be by the same sculptors who had done the ones in the cloister in Moissac. 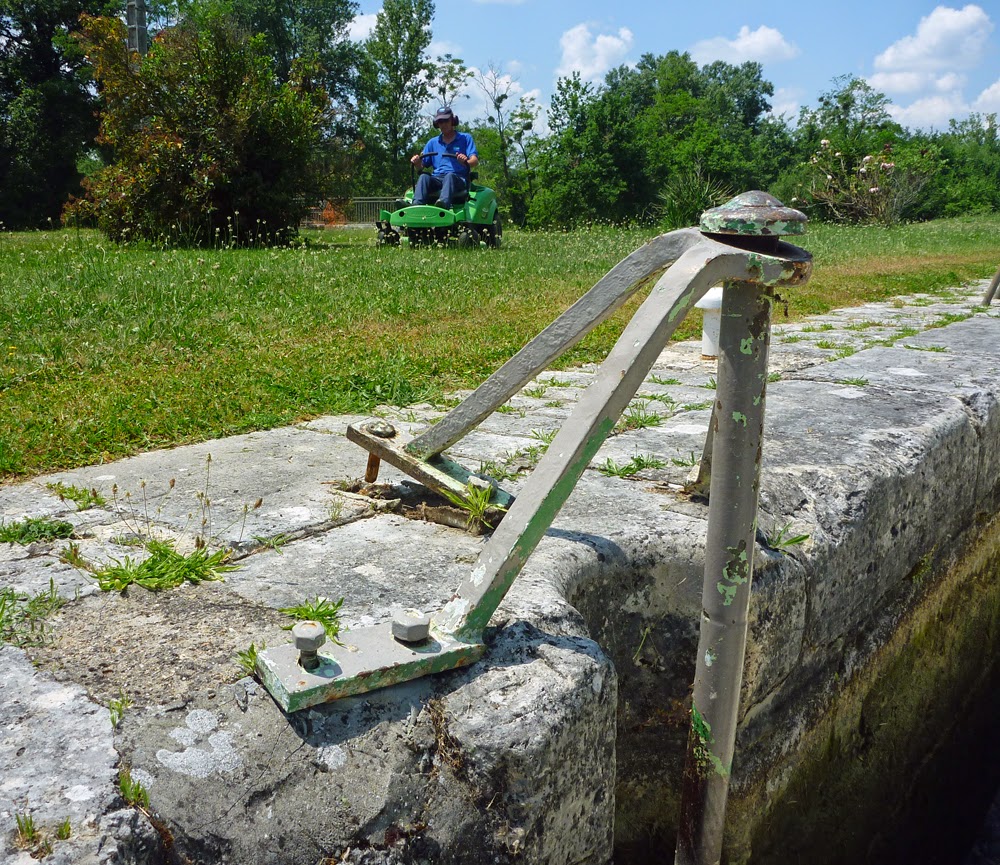 After a thorough visit to the church, we paused at the bakery for fresh bread and croissants and then continued up the canal. A few locks along we almost had a pipe bollard collapse onto us as Edi looped the bow line onto it. We scrambled for other mooring arrangements and as we rose to the top of the lock, we had a clear view of l’éclusier doing the only maintenance that seems to be done: mowing the lawns. 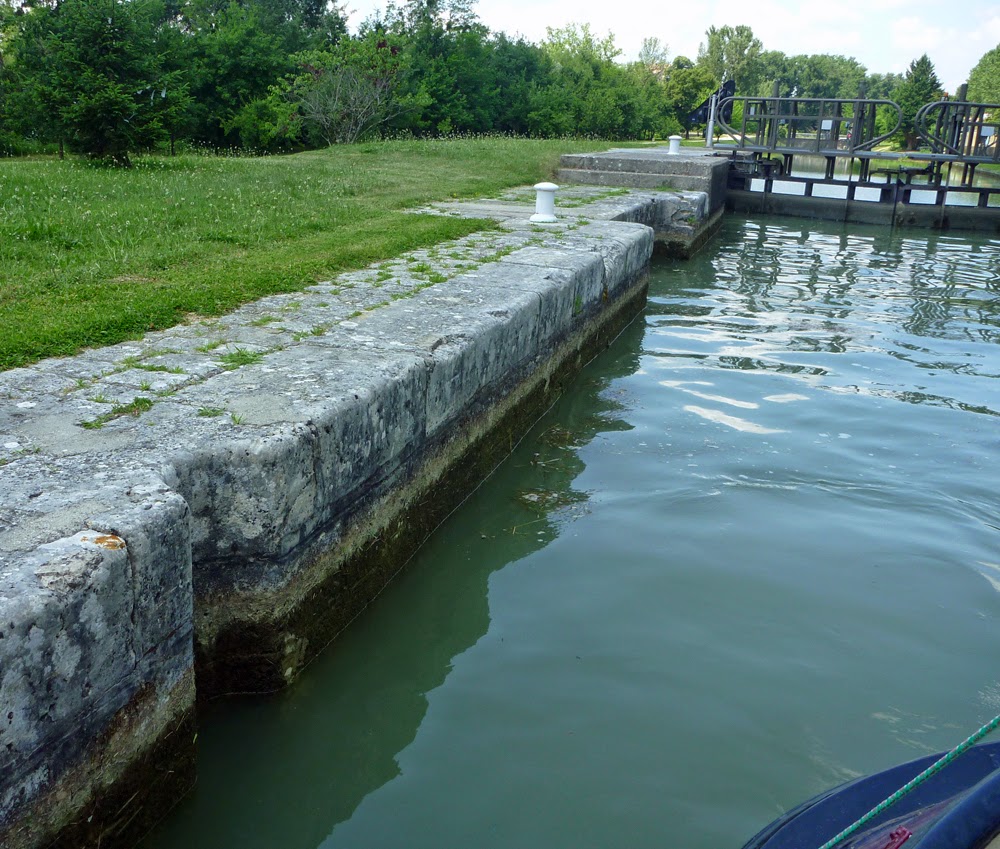 The pipe bollard at the downstream end of the lock was missing, hopefully not injuring anyone as it collapsed into the chamber. The lawns; however, were well groomed. We continued along the canal through six locks and 36.6 kilometres to Serignac, where in the late afternoon we moored on the pleasantly sited wharf. 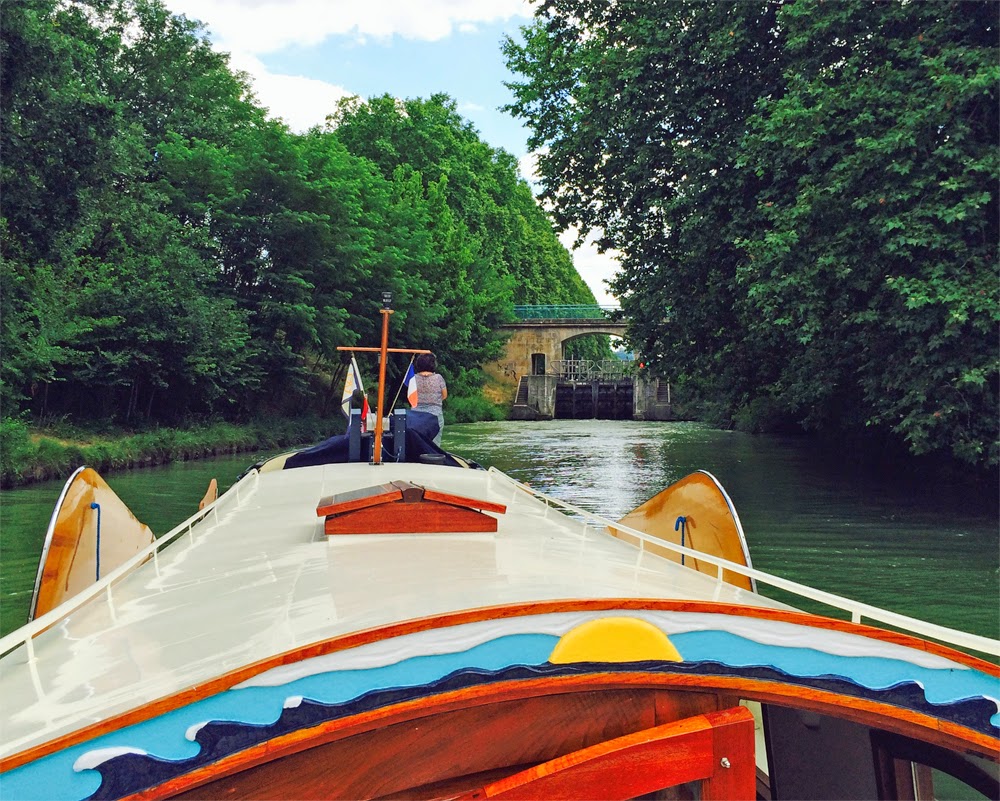 We spent Saturday resting alongside in Serignac, enjoying the free moorage and its free water and electricity, then on Sunday morning we continued along toward Agen. Just over eight kilometres along we came to the start of the flight of four locks that lead up to le pont-canal d’Agen, the aqueduct across la Garonne. We waited as the first chamber drained and prepared for us. 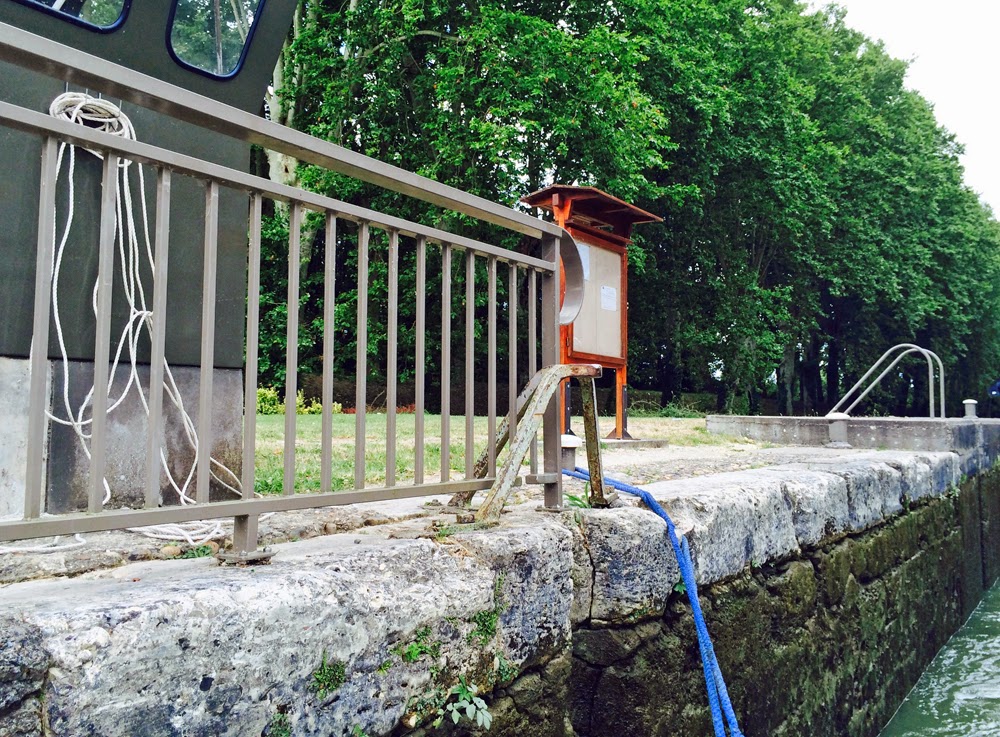 The first thing we saw in the chamber was broken and dysfunctional infrastructure. Three of the four pipe bollards were broken or missing, a ‘safety fence’ was in the way of easily looping one of the remaining bollards and the life ring was missing, its line apparently having been commandeered by passing boaters to assist in hauling mooring lines up to the few bollards from their boats. 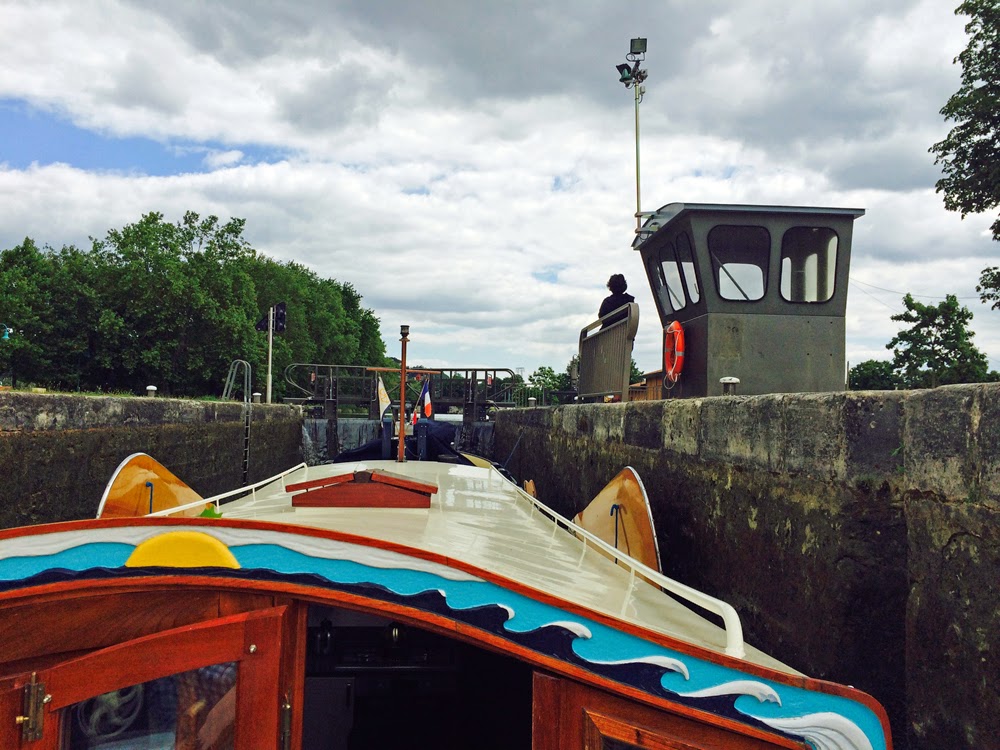 Remembering from our descent that all the locks in the series were impaired, we decided the easiest way to handle the series was to have Edi walk the three or four hundred metres between the locks and take the lines from the rim as Zonder Zorg arrived. 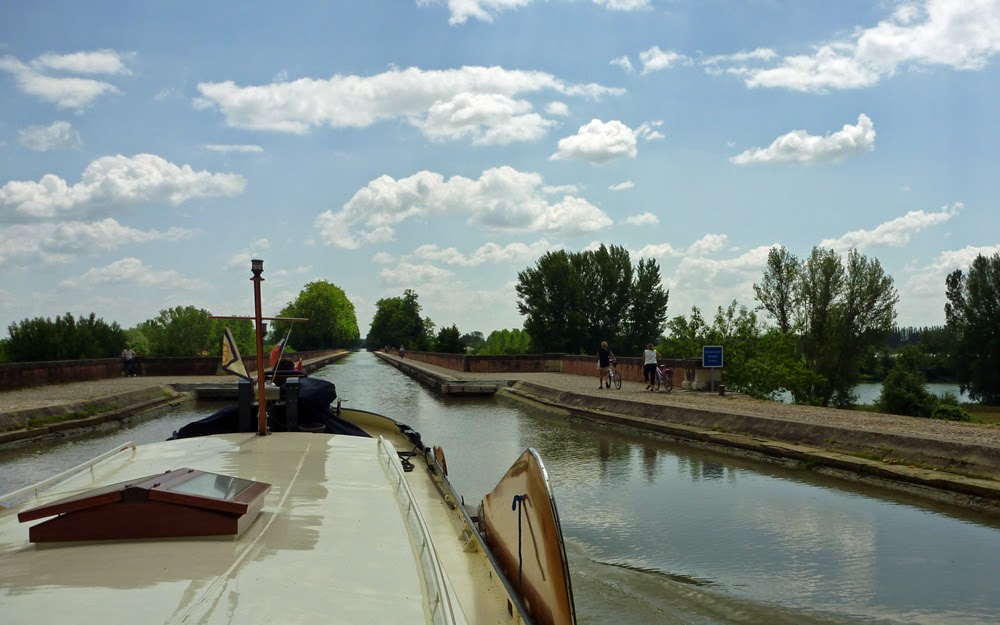 We worked our way up the four locks and then crossed the river on the 580-metre-long aqueduct. In the early afternoon we secured in the Hermitage basin in Agen. Moorage is on a bank crudely ‘improved’ with wooden posts and planks, but with no bollards, water nor electricity. The moorage with facilities has been taken over by a boat rental company. 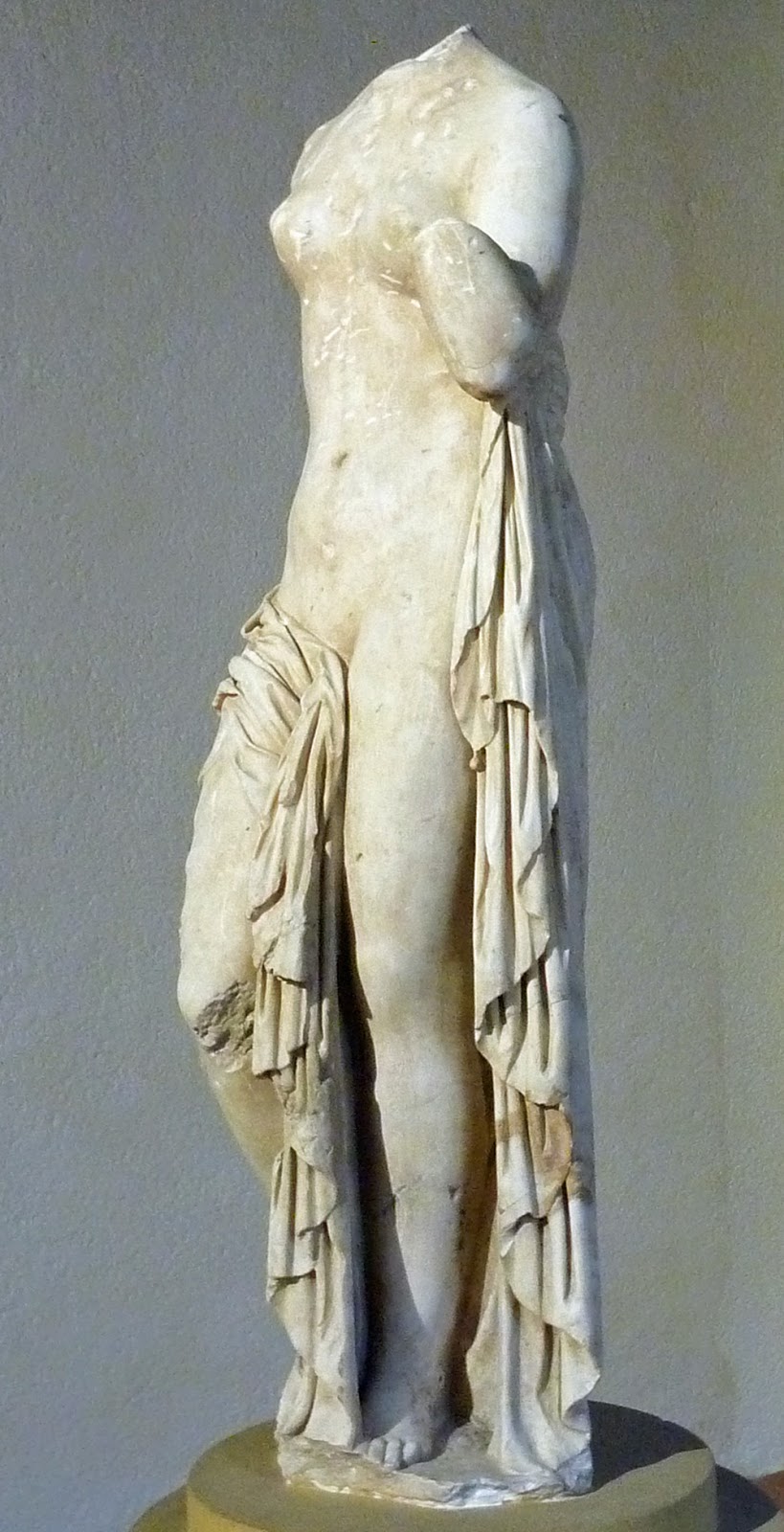 On Monday morning we walked the bridges across the canal and the railway yards to the centre of the city. All the shops were closed, but we were hoping the market hall would be open. It wasn’t, but we did find a Petit Casino, the French version of our Seven-Eleven with similar poor selection and rip-off prices. We noted its location and continued on to le musée des Beaux-Arts. We had been drawn to the museum by the description in the guide, which mentions some Gallo-Roman treasures, including the superb Venus de Mas and paintings by Goya, Sisely, Picabia and Dufy. We quickly found Venus de Mas d’Agenais, a first century BC Roman copy of a Greek sculpture rendered in marble from Asia Minor. Its placard tells that it was discovered in 1877 in Mas d’Agenais. This is around the time the Abbot and the Count were stopped by the Prefect from selling the Rembrandt from the church to the Louvre. 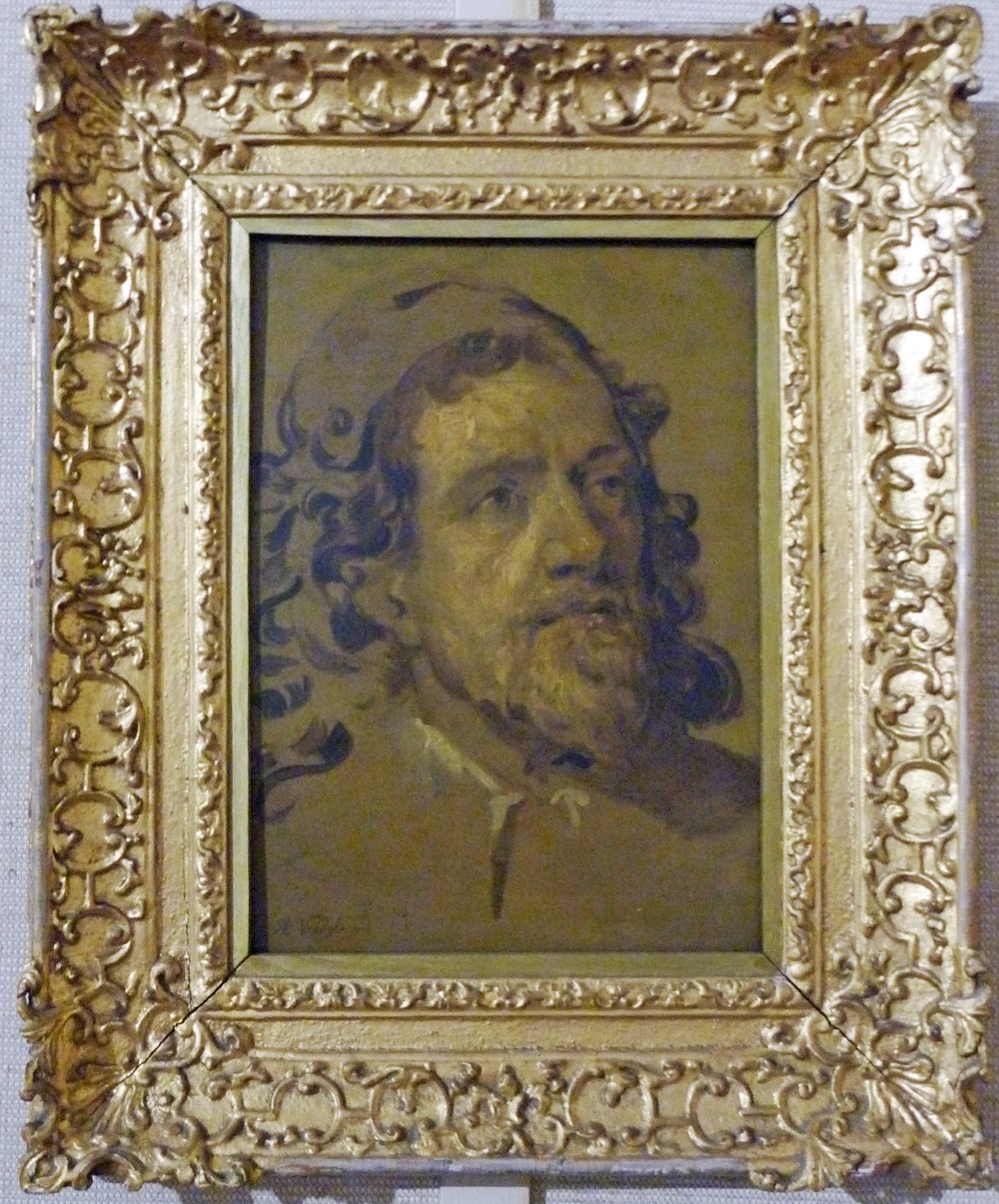 We continued through displays of Paleolithic tools and artifacts, as well as large selections of Bronze Age and Iron Age pieces, before entering the art galleries. We were very disappointed by the poor lighting in the galleries, with badly placed lights reflecting glaringly off the surfaces of most of the paintings, making viewing near impossible. A portrait by Anton Van Dijk was barely visible in the glare. 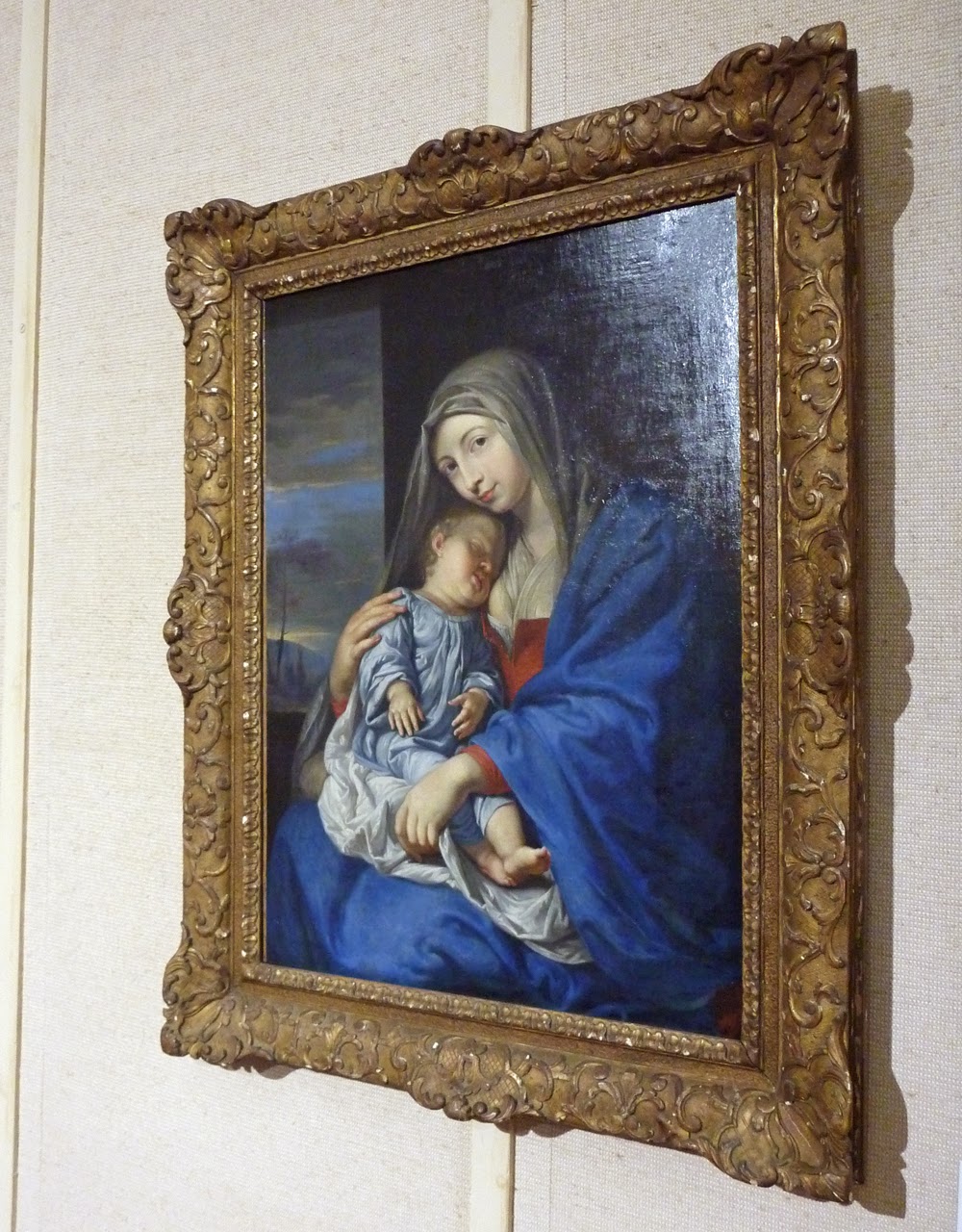 I shot many pictures at oblique angles in an attempt to prevent glare. 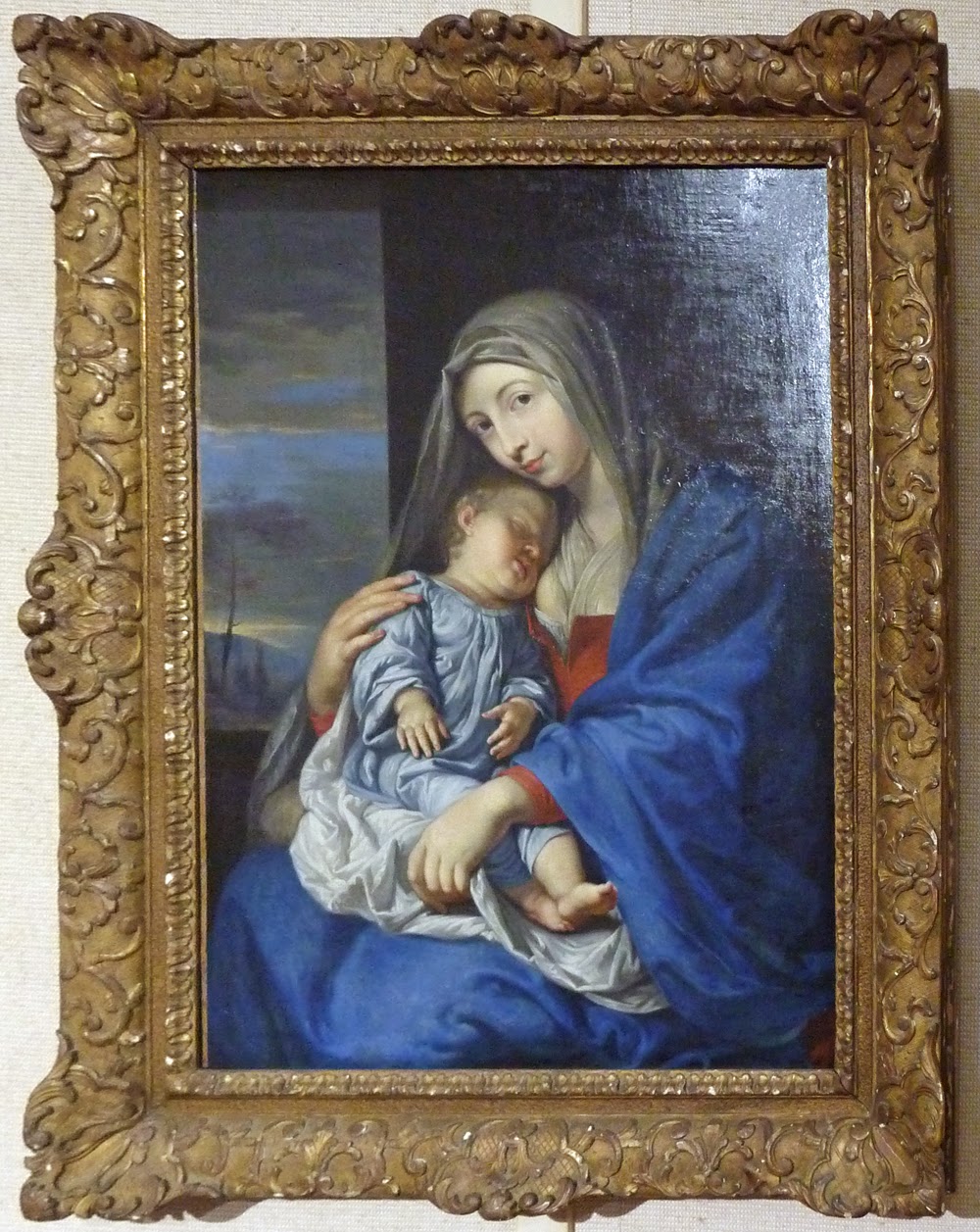 With some creative distorting and skewing in Photoshop, these became much easier to appreciate
on the computer screen than they are in the gallery. 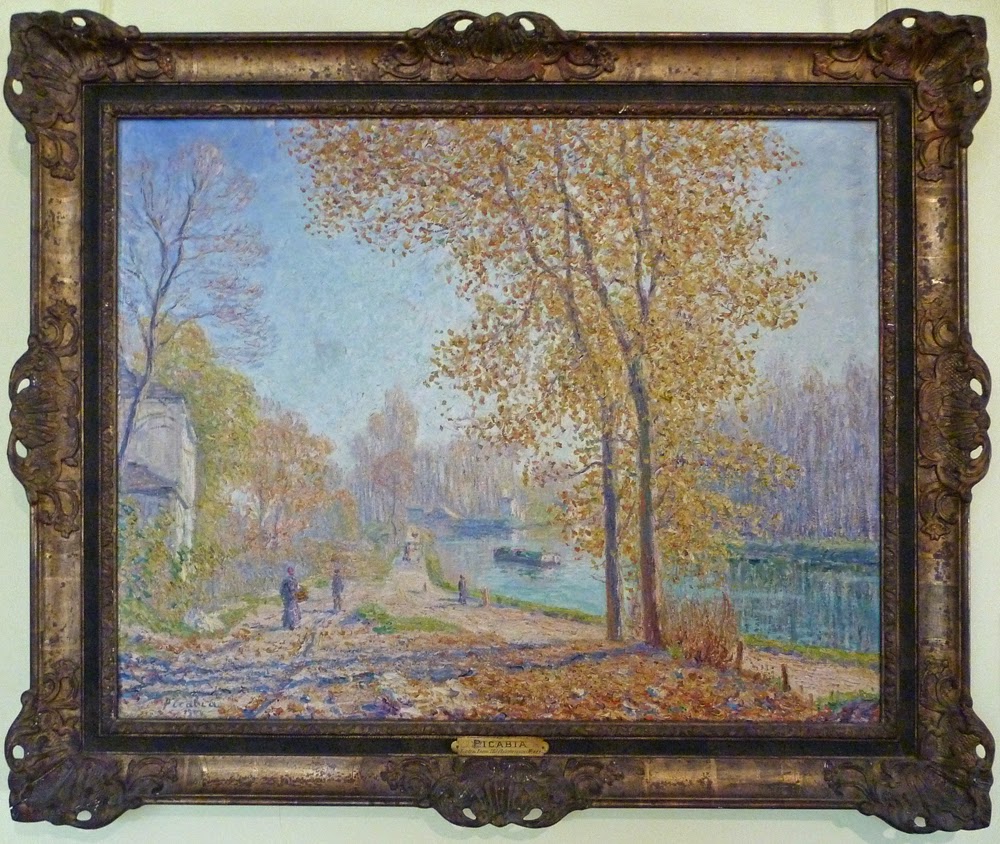 This 1904 impressionistic scene along the Loing River at Moret is by Francis Picabia, who is more famous for the creation of Dada and Surrealism. He had encountered Impressionism in 1897 through Sisley and Pissarro. 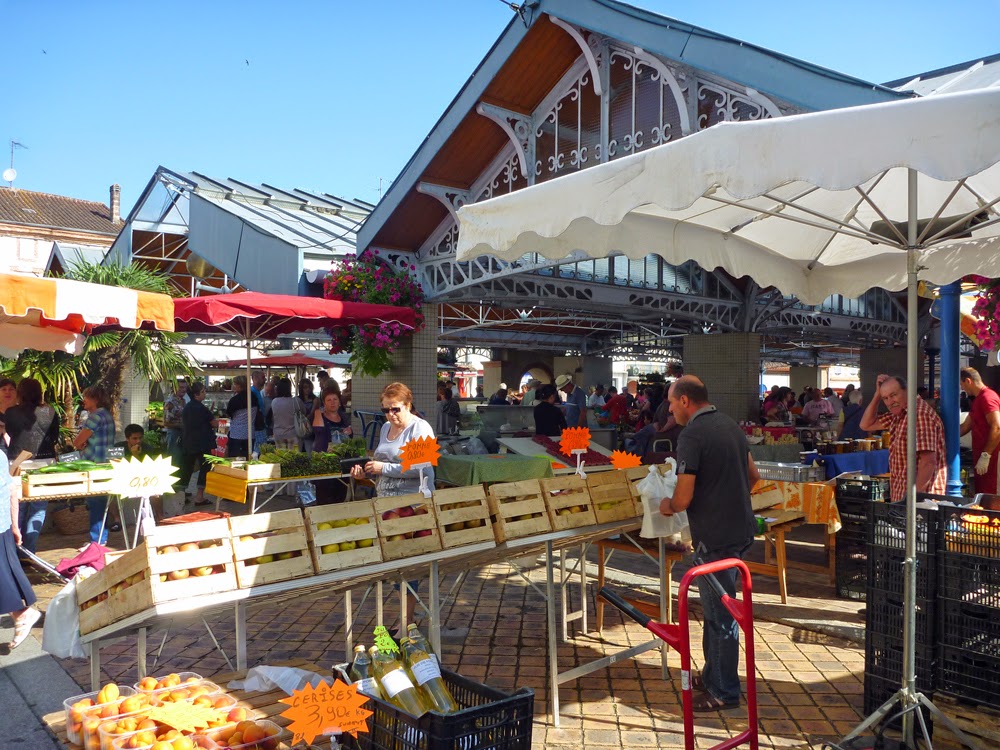 On our way back to the barge we stopped in at the rental boat base to inquire about the price of diesel fuel. Agen is one of the very few places along the canal where it is available, and the company is holding their rental clients and the boating public to ransom with a price of €1.75 per litre, more than 40 cents above street prices. We passed on the fuel and in the early afternoon, continued up the canal, stopping four hours, twenty-four kilometres and three locks later in Valence d’Agen. The next morning’s market and the large Intermarché enabled us to properly refill our supplies. 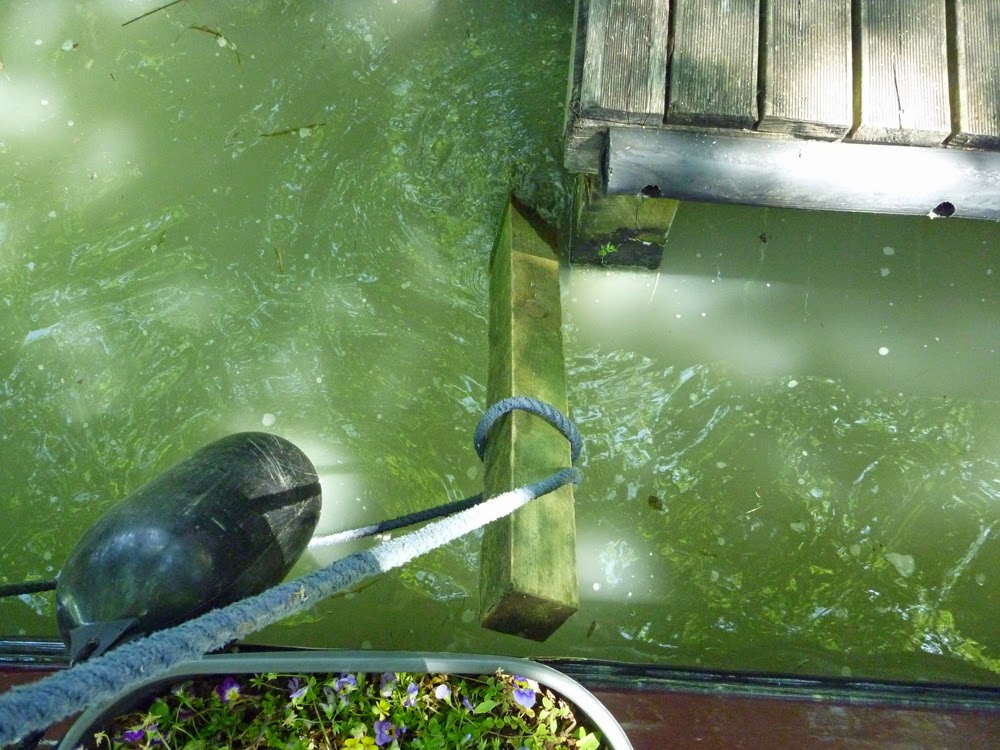 We continued to find broken and dysfunctional canal infrastructure at nearly every lock. This mooring post on a waiting quai was the only one left, and it came free and floated away as we used it. 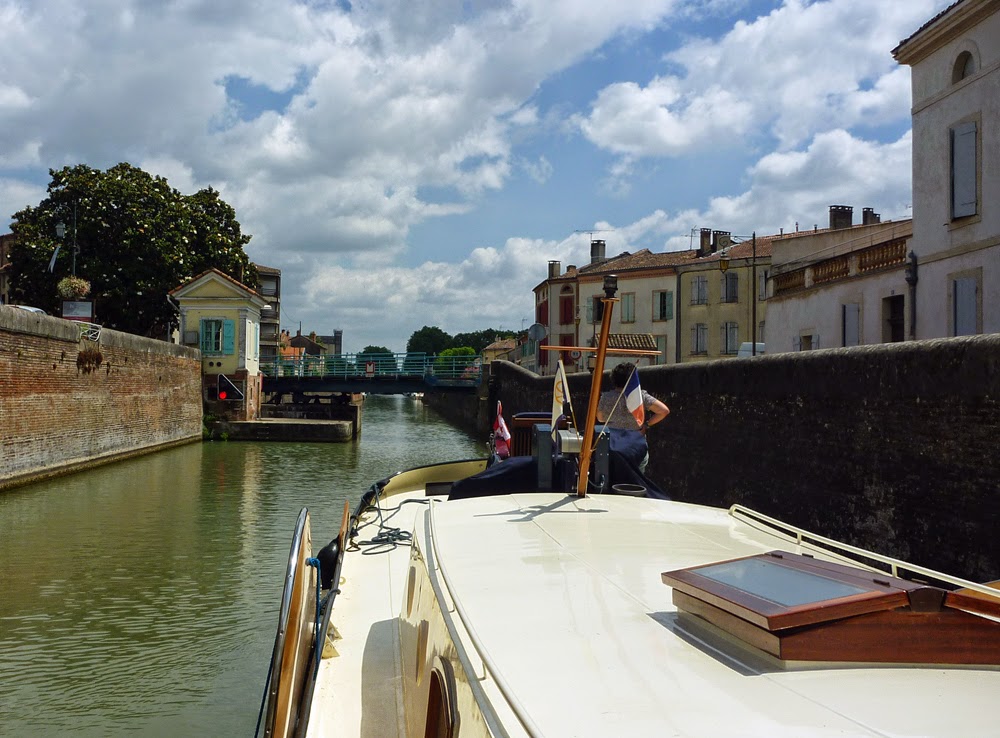 Not wanting to endure another long series of moorage shuffles in Moissac, we paused there this time long enough only for the swing bridge to be opened for us.

Instead of stopping there, we opted to continue across the aqueduct and along six kilometres to moor on the quiet embankment close to the hardware stores and supermarkets on the outskirts of Castelsarrasin. 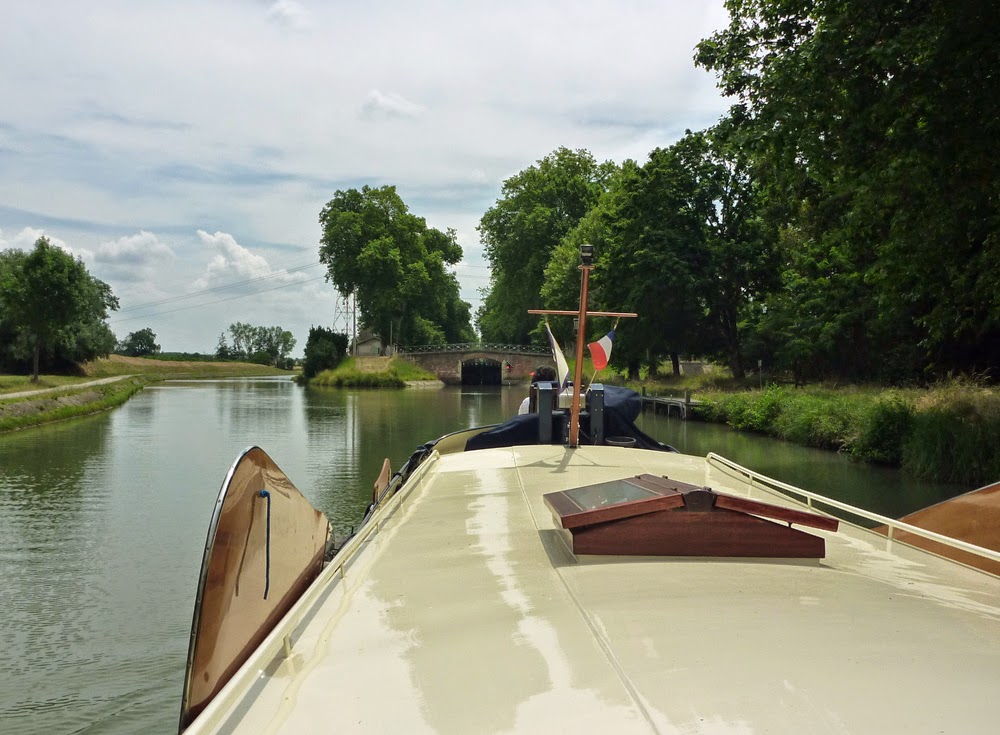 On Wednesday morning we continued along, ascending the series of locks past the water slope at Montech, before heading down le canal de Montech four kilometres to the peaceful moorage in Lacour St-Pierre. 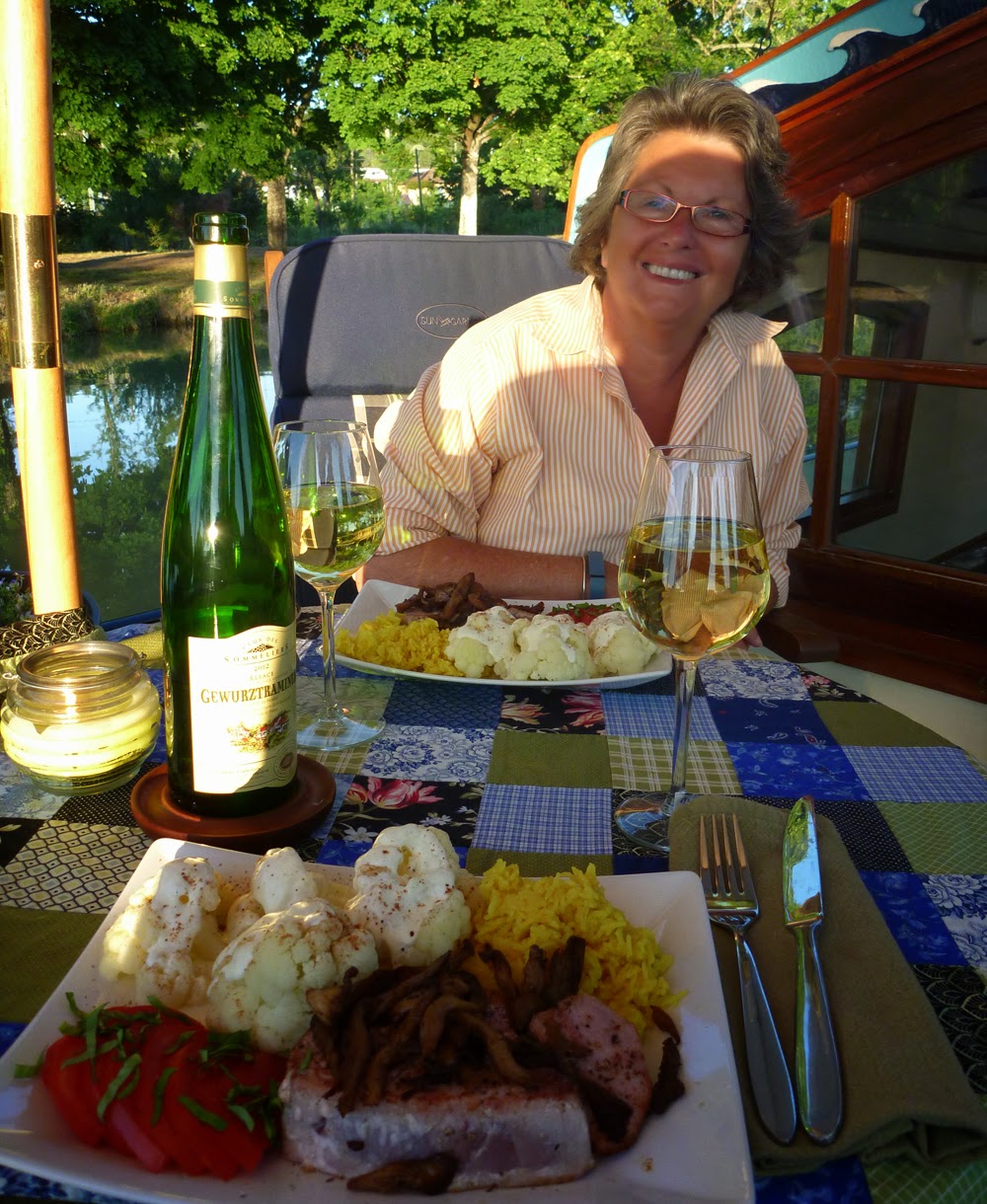 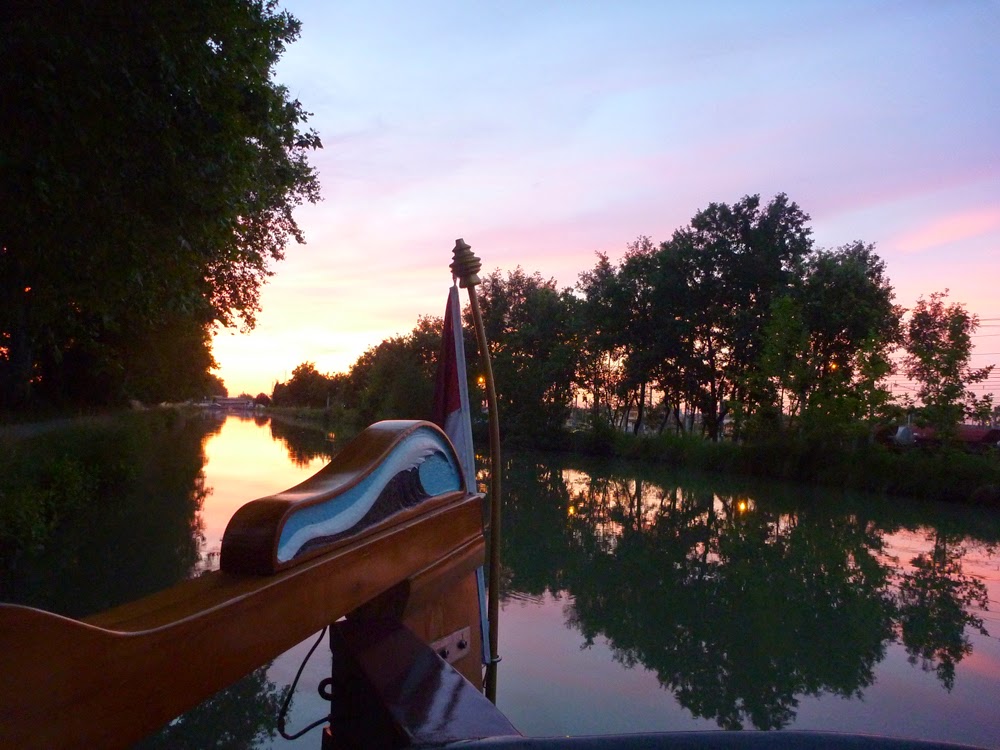 The next morning we moved back up the canal three kilometres to moor on the bank behind the Intermarché. We hauled two 20-litre jugs of diesel fuel from the supermarket’s filling station, bought at €1.295 the litre, rather than the €1.75 we had seen at the rental boat base in Agen. We then continued along, stopping for the night in Grisolles. On Friday we continued along to a wilderness mooring a short distance above Écluse Lespinasse, a safe distance from the outskirts of Toulouse. 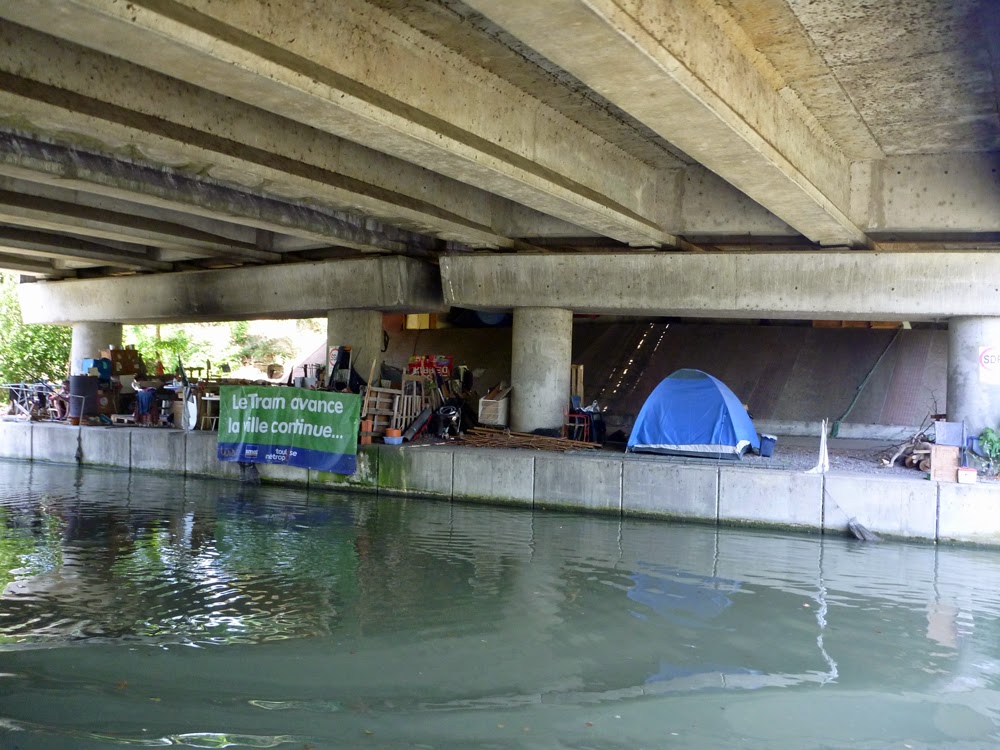 We slipped at 0945 on Saturday morning and shortly began passing the industrial sprawl and derelict havens of Toulouse. At 1150 we entered le canal du Midi and began back up it, arriving within two kilometres at the first lock. The three locks through Toulouse are run from a central control station, and all we needed to do was twist the dangling wand before the first one to set the series in motion. 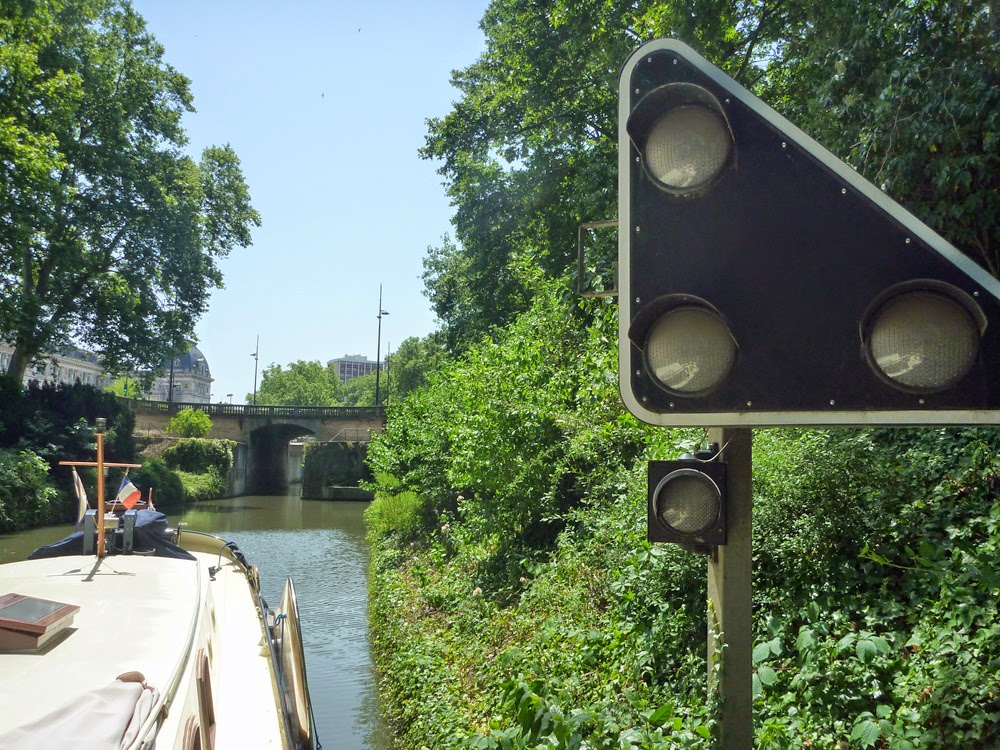 We quickly passed through the first and second locks and arrived at the third, an old triple lock bastardized into a 6.2 metre single canyon in front of the main train station. The traffic lights were turned off at 1222 as we approached the lock and the gates began to close. It was lunch time; the lock is scheduled to close at 1230, but our transit would have taken l’éclusier a minute or two into his own time, so we were forced to stop, back down the canal and scramble for a mooring spot. 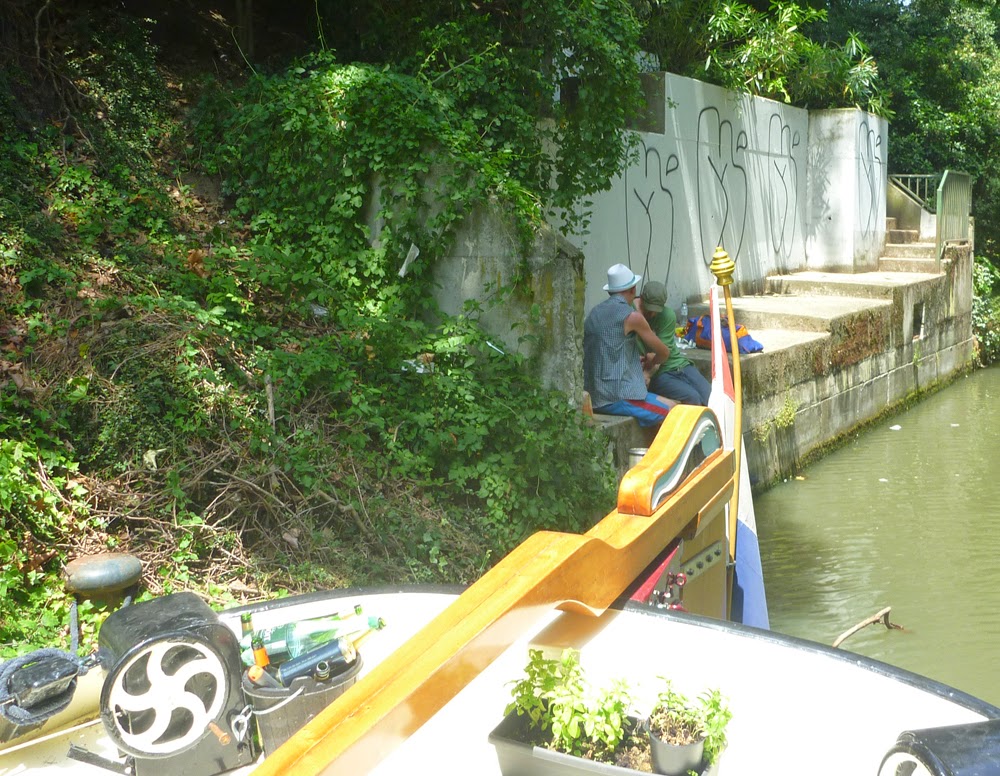 The only mooring place was occupied by two addicts melting heroin and shooting-up. I backed to within a line toss of the last bollard and dropped the spud pole to moor in the tangle of weeds just out of reach of the pair. Welcome to Toulouse!
Posted by Zonder Zorg at 05:27