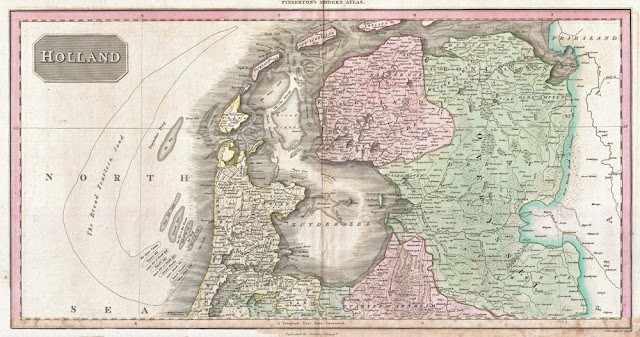 I've long been fascinated by the geography and history of the Zuiderzee. It was an arm of the North Sea that had gradually evolved with the rising sea levels caused by the slow global warming and melting ice sheets from the last ice age twelve thousand years ago. Global warming is not a new thing invented by pseudo-scientists and popularised by Al Gore; it is one of the natural cycles of the earth’s climate, just as is global cooling. This map from 1818 shows the inland sea in the early nineteenth century.

At the end of the ice age, the area now known as the North Sea was dry land. About five thousand years ago, the rising sea levels from the melting and recession of the last of the ice sheets that had covered northern Europe, created the North Sea and the melting polar icecaps soon increased it to its current shape. The topography of the areas inland from the coast in what is now the northeastern portion of the Netherlands was a shallow depression. Drainage here was slow and the area filled with peat. The continued warming trend caused the North Sea levels to rise further. Gradually there were inundations over the low lands inland, and flooding during major storms accelerated the erosion of the coastal dunes. The two maps above show the approximate land form of what is today the Netherlands. The one on the left shows the coastline during the first century AD, the one on the right depicts its shape in the tenth century. 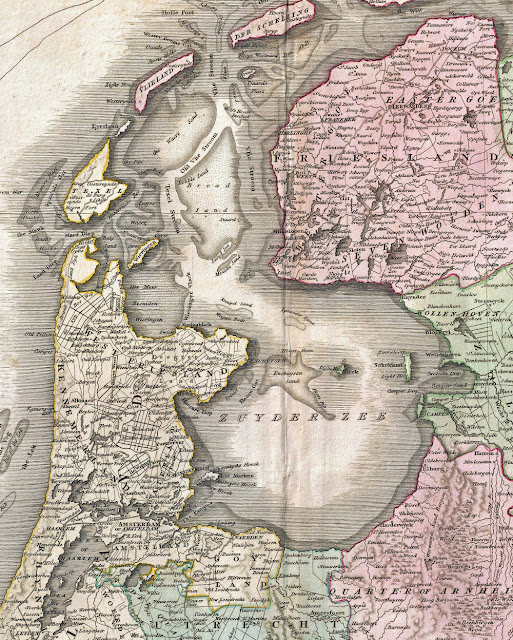 Storms in 1282 and 1287 broke through the coastal barriers and the sea flooded inland. The name Zuiderzee entered general usage around that time. The size of the inland sea remained relatively stable from the fifteenth century onwards because of improvements in dikes. There were continuing disastrous floods, one in 1421 broke a seawall and incoming waters flooded seventy-two villages and killed about ten thousand people. 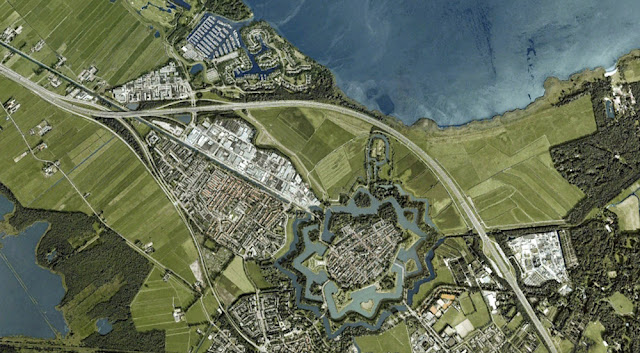 Dikes and seawalls continued to be built and upgraded and around the Zuiderzee many fishing villages grew. Some of these developed into fortified towns, like Naarden in the Google Earth image above. Many established important trade connections with ports in the Baltic Sea, England and in the Hanseatic League. Kampen in Overijssel grew in prominence, as did several villages and towns in Noord Holland, such as Naarden, Amsterdam, Edam, Hoorn, and Enkhuizen. The formation of the Zuiderzee had created many large protected ports that were connected to the sea and started the ascendancy of the Dutch to the status as the world super power in the sixteenth and seventeenth centuries.

The Dutch continued to extend and reinforce its system of seawalls and dykes and look at ways to reclaim land from the sea. In the seventeenth century there was a proposal to harness the waters, but its concept was too ambitious and impractical for the available technology of the time. In nineteenth century serious attention was given to controlling the waters and reclaiming land. Plans were proposed in 1848, 1849, 1866, 1873 and then Cornelius Lely began serious planning in 1886. 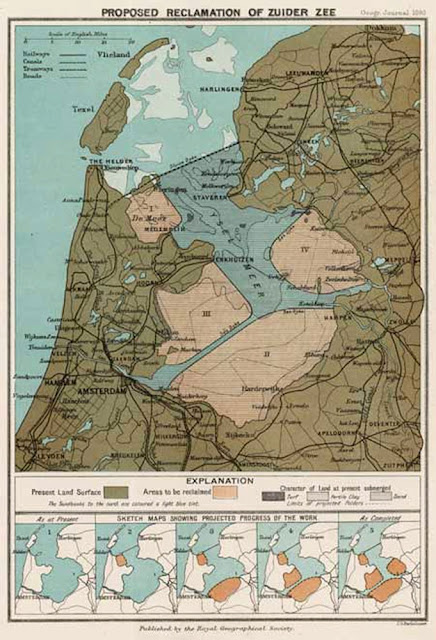 This map was used to illustrate an article in the March 1893 edition of the Geographical Journal of the British Royal Geographical Society. The article had been written by Pieter Hendrik Schoute of Groningen, Friesland. He wrote of plans developed by a technical research team under the guidance of Cornelius Lely, who in 1891 had become the Minister of Transport and Water Management for the Netherlands. 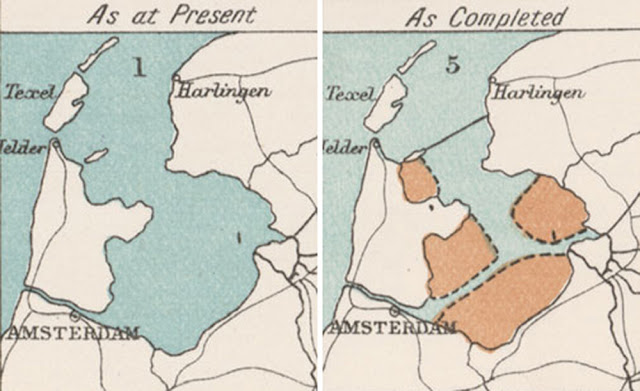 The plan called for the closing of the Zuiderzee with a dyke running from the tip of Noord Holland to western Friesland, making the contained waters into a freshwater lake. Once this was stabilised, internal dykes would be built encircling some of the shallowest areas and then draining these to reclaim the land. It was a very ambitious project. 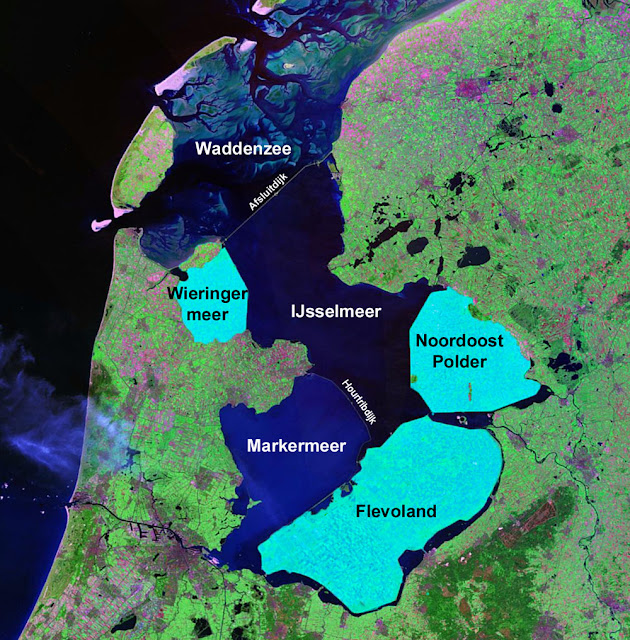 The project sat on the shelf through the recession of the 1890s and continued to gather dust into the twentieth century. In 1913 Cornelius Lely regained his seat as Minister of Transport and Water Management. After severe flooding along the Zuiderzee coasts in 1916, the plans were resurrected and in 1918 the Zuiderzee Act was passed. Works began in 1920 and they progressed in stages. By 1924 the first dike, just 2.5 kilometres in length was completed. Between 1927 and 1932 the 23 kilometre Afsluitdijk was built between Noord Holland and Friesland, cutting off the newly formed IJsselmeer from the Noordzee. The polders were drained between 1930 and 1968.

The newly created lands of Wieringermeer were absorbed into the province of Noord Holland. Those of the Noordoostpolder and the Flevolands were united in 1986 to form the new province of Flevoland. A total of 1650 square kilometres of new land was created. About fifteen percent of this is now used as housing, nearly seventy percent is for agriculture use and the remainder is parks, nature preserves and infrastructure. The plans to dyke and drain the southwest portion of the old Zuiderzee to form a polder named Markerwaard was indefinitely postponed in the 1980s. 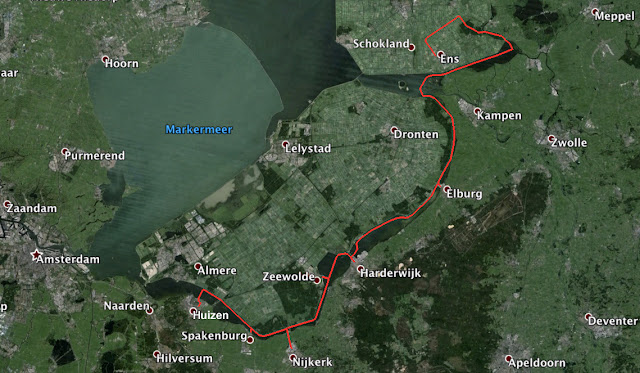 During the past two weeks I've slowly made my around the south and east shores of the old Zuiderzee, visiting medieval towns and cities along the way. Zonder Zorg is currently at the end of a long, blind canal in the new province of Flevoland that half a century ago was under four metres of water at the bottom of the old Zuiderzee. 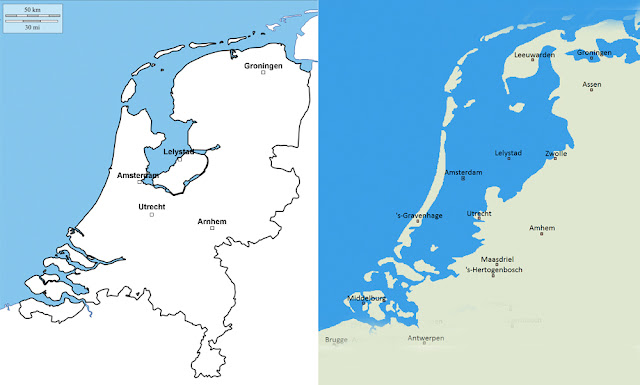 These maps show the scale of the industry of the Dutch people over the last millennium as they reclaimed land from the sea. The map on the left is the current landform of the Netherlands. The one on the right shows the areas of the country that are below sea level.
Posted by Zonder Zorg at 08:44