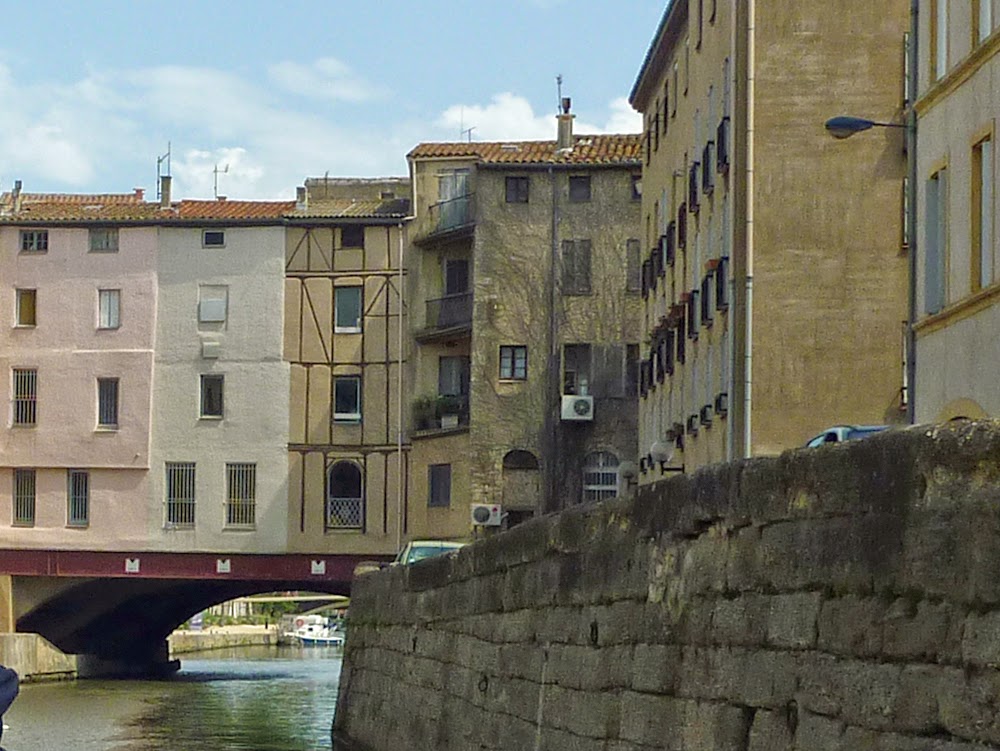 At 1320 on Wednesday, 9 July we slipped our moorings in Narbonne and headed down the canal a couple of kilometres to the winding basin, where we wore around to head back up. Our dead battery problem was unresolved and SRF was in process of organizing some engineers to drive south from Harlingen to meet us. We had decided to continue along to Capestang to await them. We passed again under Pont des Marchants, which was built on one of the arches of the old Roman Via Domitia across the Aude. 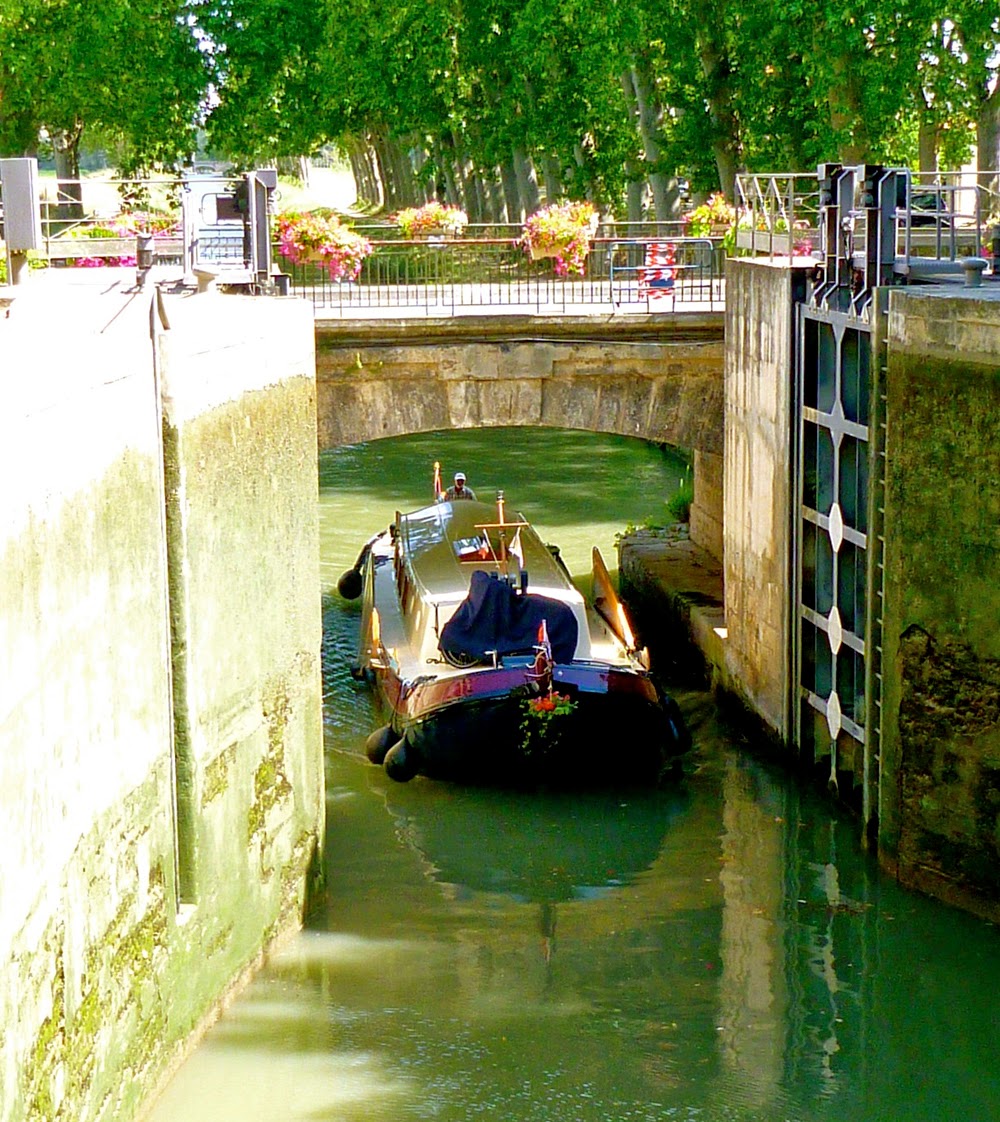 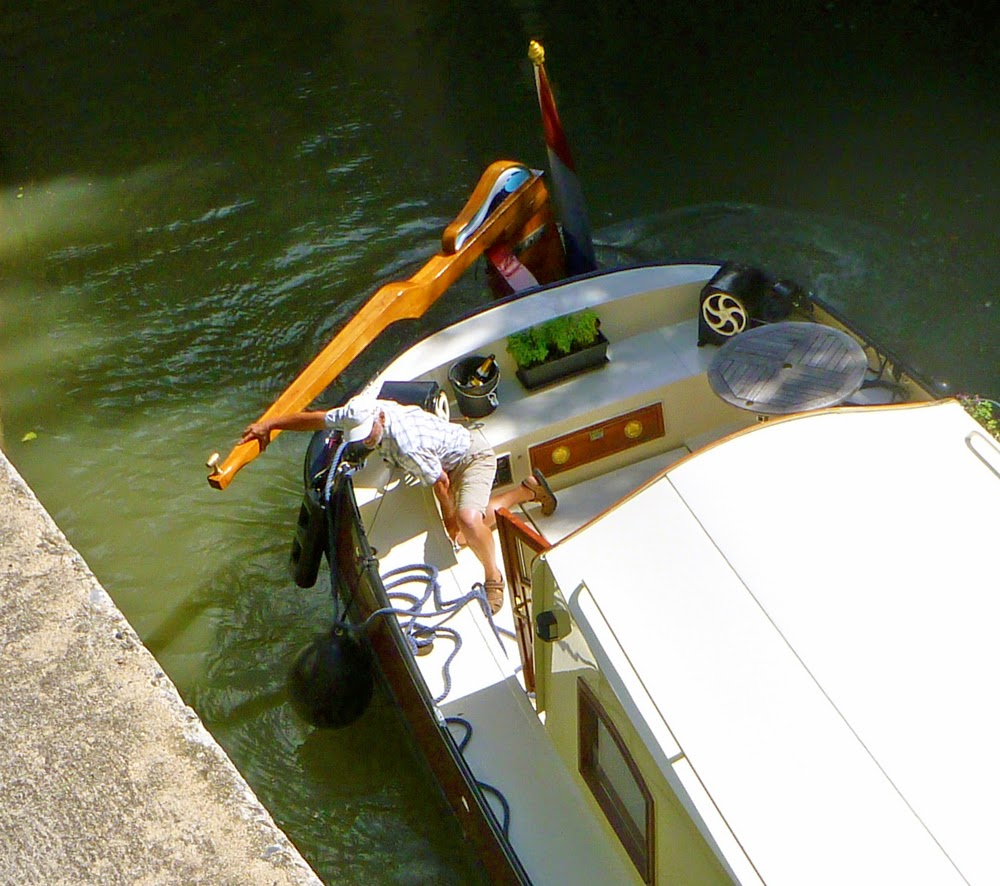 Having maneuvered into and out of over a hundred and fifty of these oval locks of the Midi, I was rather expert at getting Zonder Zorg in with a minimum of fuss. The correct angle of passage through the gates, the swing of the tiller and the timing of the astern kick are all coordinated to bring us to a stop alongside the curved wall below the bollards. 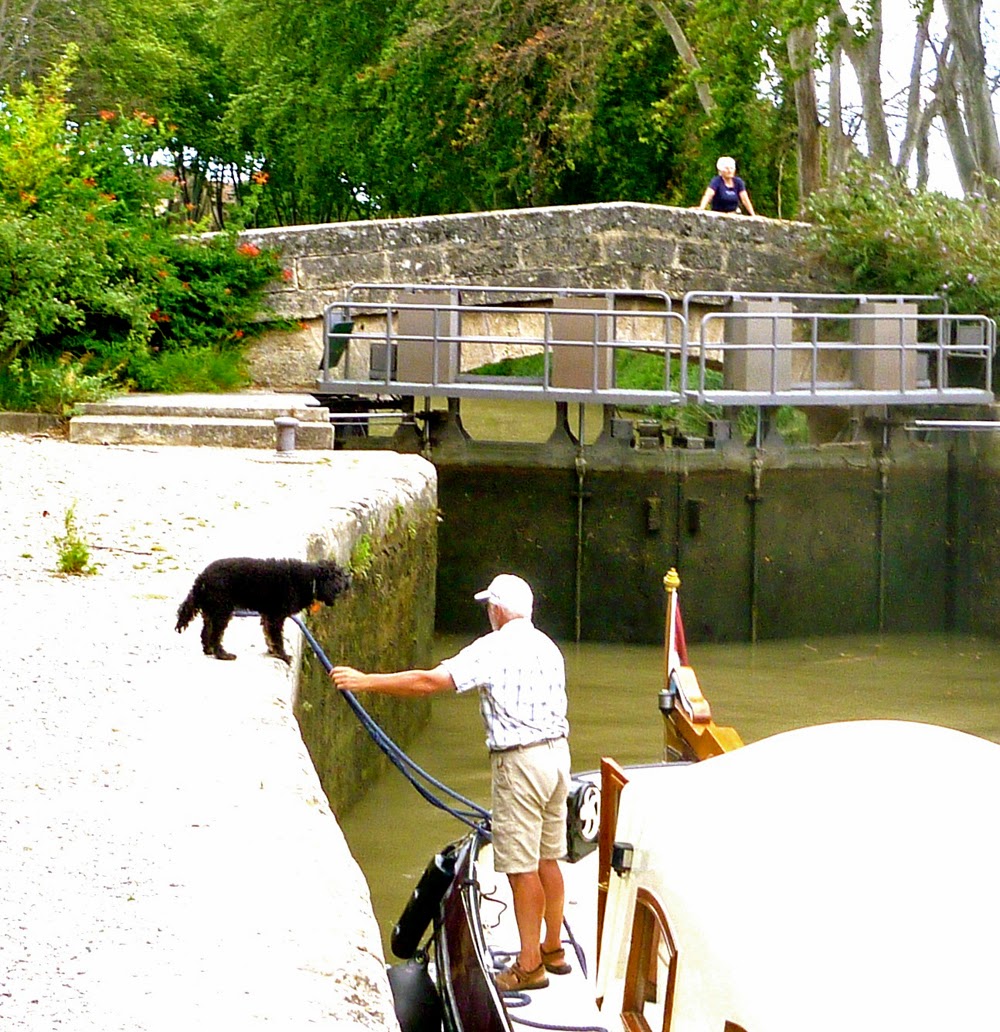 At some locks, the locals pause to watch and some take time to offer greetings. 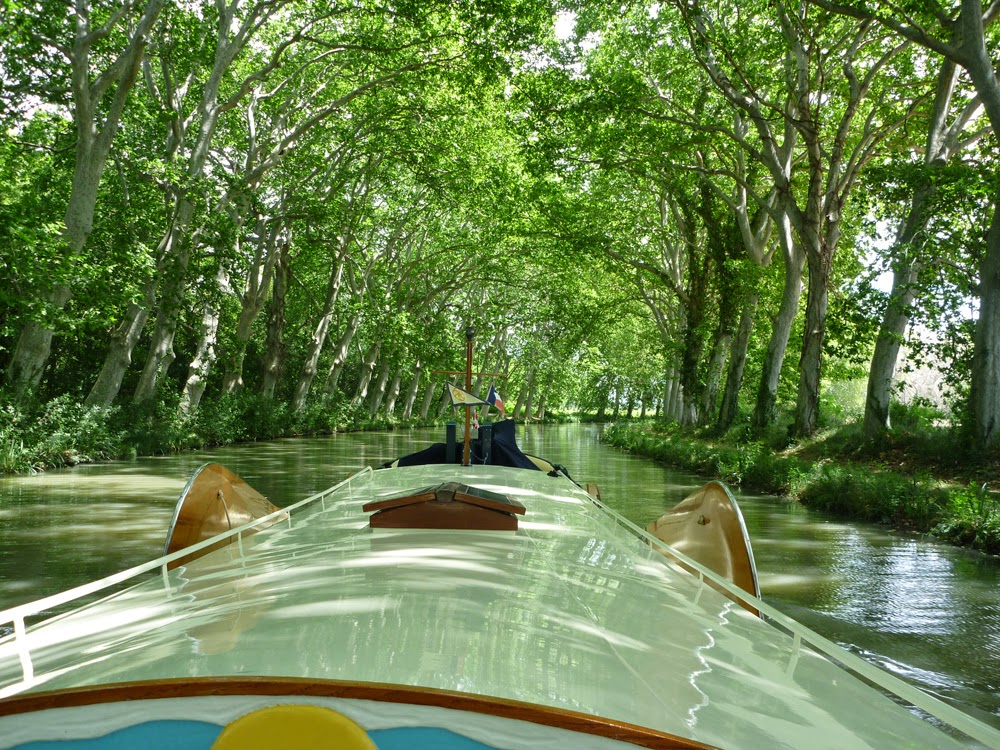 In the late afternoon we stopped for the day in the peaceful village of Sallèles-d’Aude. With no house battery and no shore power, we had to run the generator whenever we needed water or lights. This made sense for the dishwasher, but seemed overkill to brush teeth or flush the toilet. On Thursday morning we continued up the canal to the junction with Canal du Midi, where we turned right to continue down it. 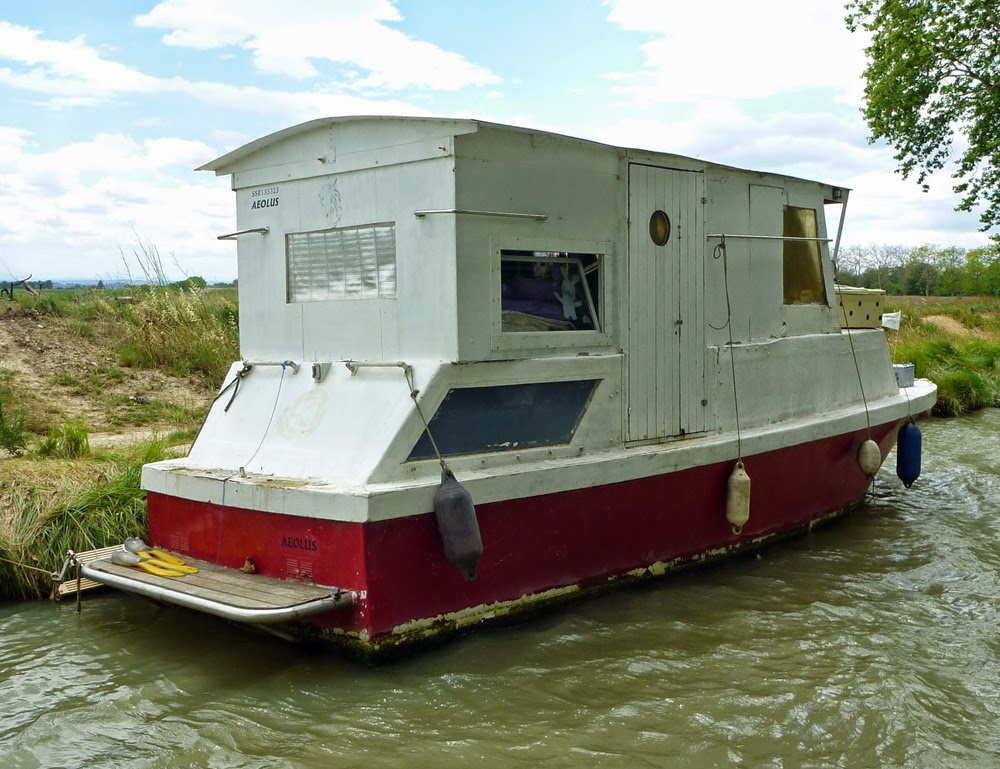 Along the way we passed some questionable examples of boat design. 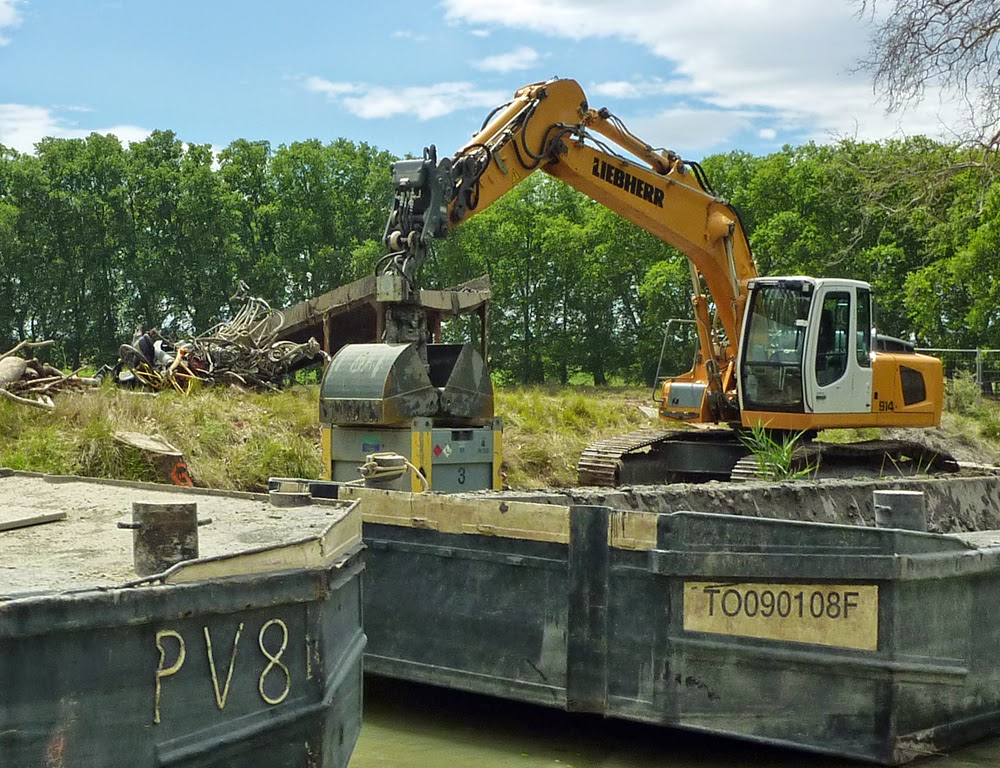 Shortly before Capestang we passed some dredging barges being relieved of their loads. Among the dredgings was a large pile of bicycles and other gear that likely fell off rental barges as they slammed into the banks, locks and bridges along the canal. 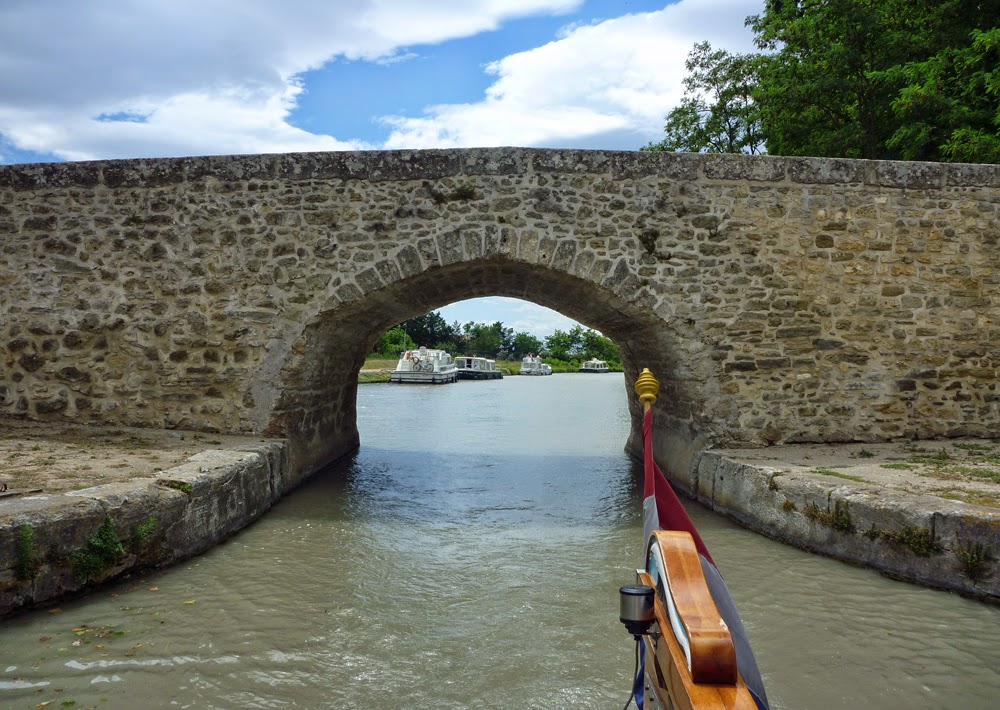 We passed under Pont de Capestang, one of the more restrictive passages on the Canal du Midi. Its masonry bears the scars of many unintended encounters over the years. 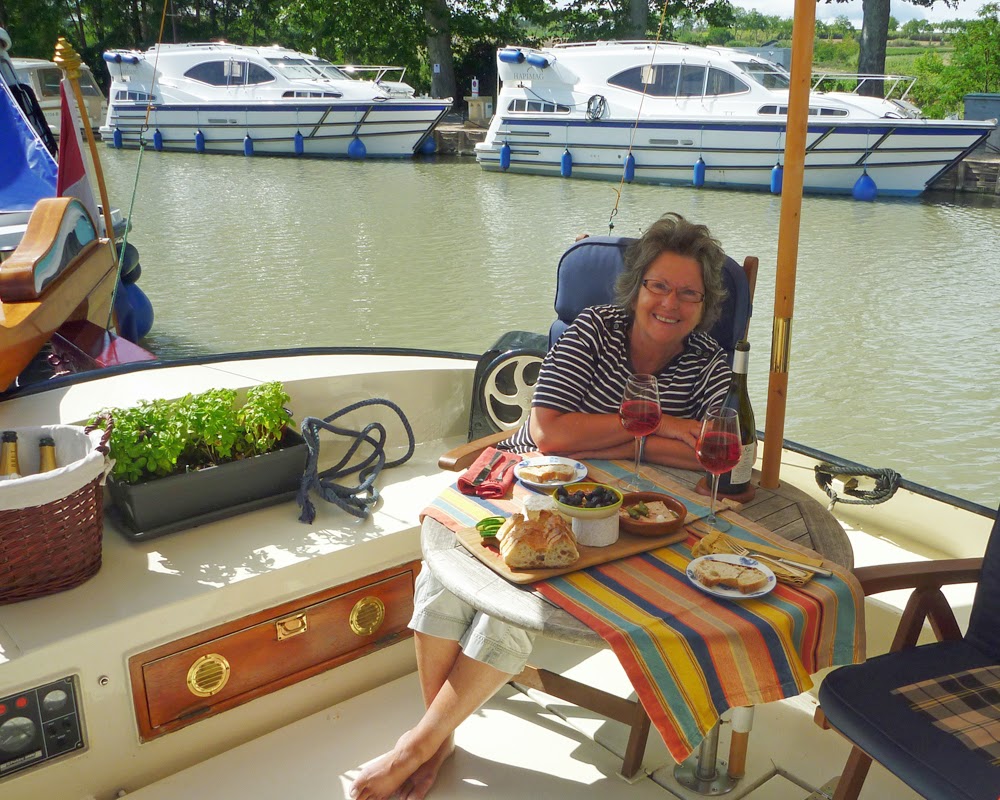 Mid afternoon we secured to bollards along the bank between the bridges in Capestang and plugged into shore power. We again had running water and other conveniences without having to run the generator. We relaxed with a spread of food and a bottle of rosé. 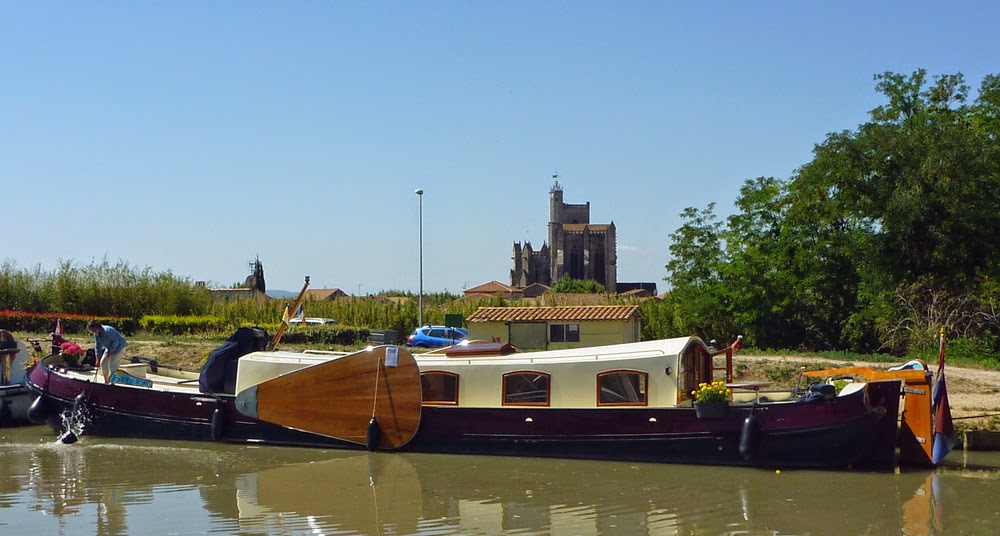 The centre of town is down the hill from the canal, and in its old centre is Collégiale Saint-Étienne de Capestang. It was begun in the late thirteenth century, designed by the same architect who had designed the cathedral in Narbonne. The construction began with the choir and progressed arch by arch into the early fourteenth century, destroying as it went the eleventh century arches of the Romanesque church it was replacing. 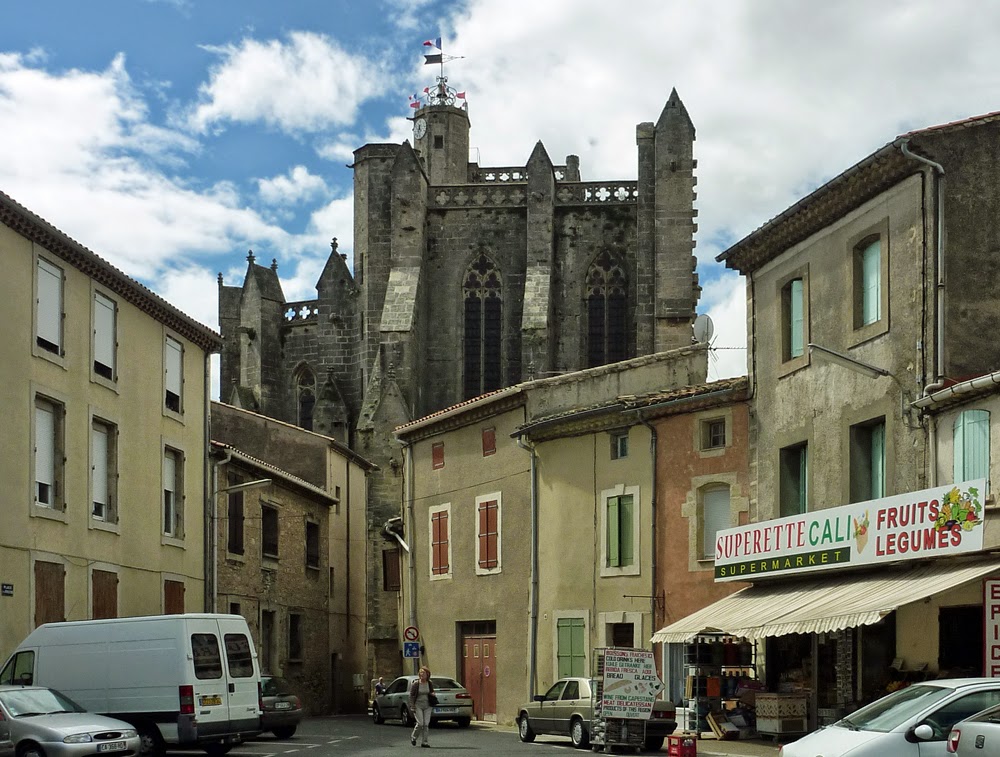 Like the cathedral in Narbonne, money and parishioner support ran out well before completion, leaving the church with an apse and a choir of two spans of Gothic vaults soaring to twenty-seven metres, butting against the much lower remainder of the Romanesque church. The roof of the older church is so low that it is hidden from view by the surrounding buildings. Visible though, are the jutting stones ready to receive the continuation of construction. 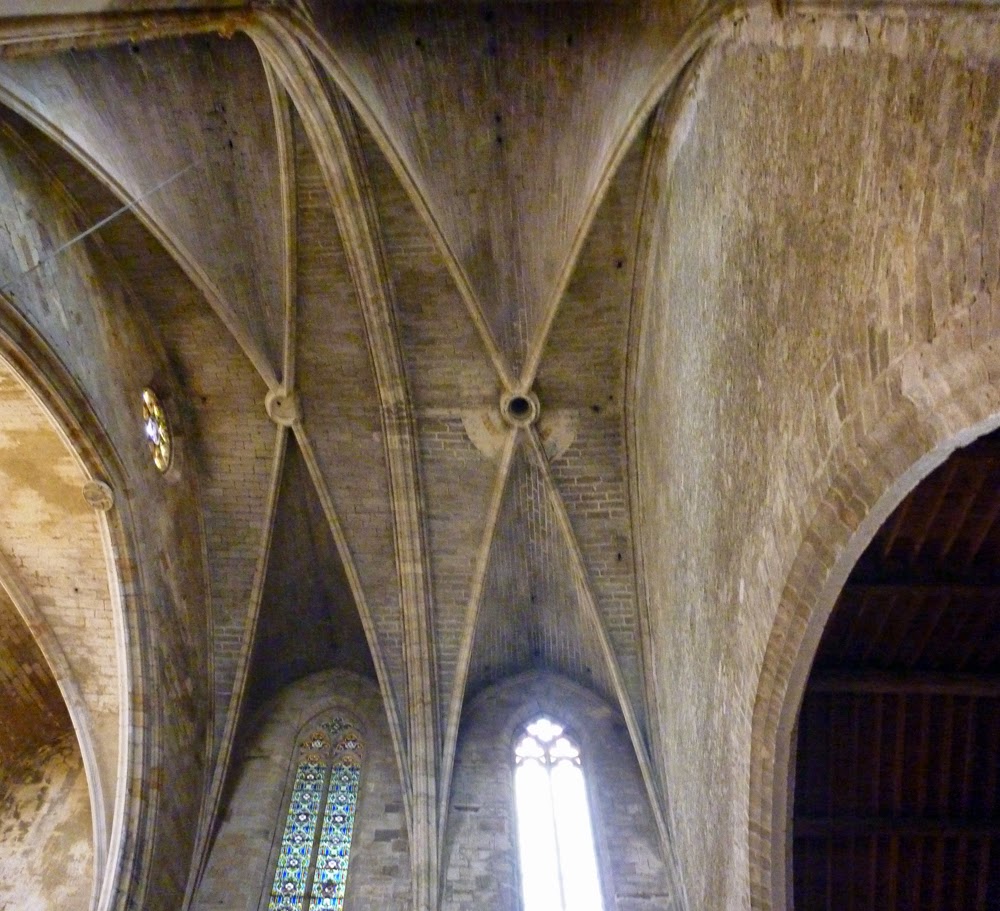 Inside, we saw the blanking wall built above the low romanesque arch to close in the incomplete structure. The very short church is missing its transept and nave and the old Romanesque portion serves as its porch. The altar is crammed into its apse. 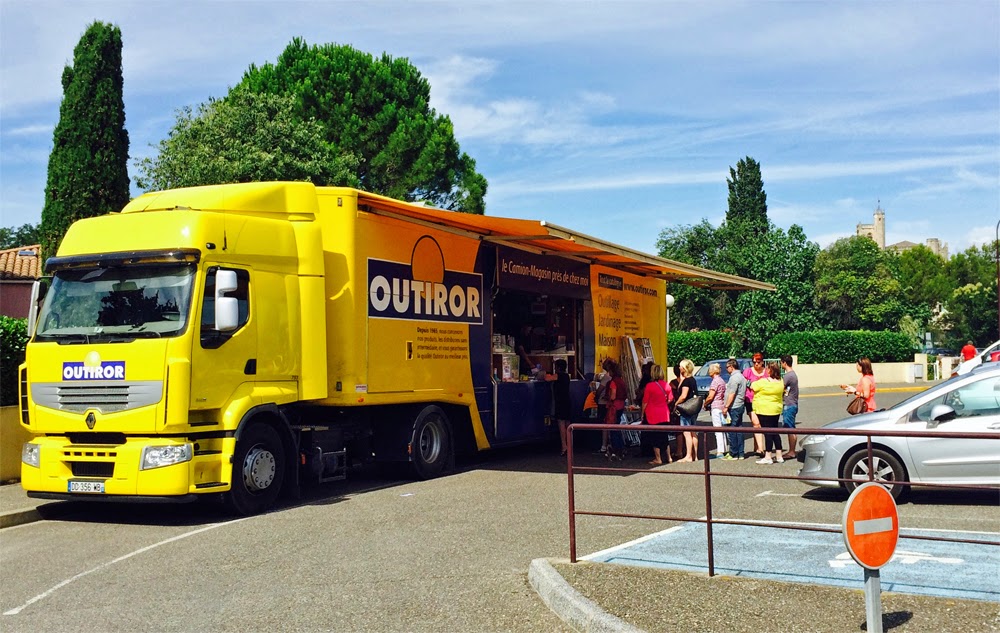 On Friday we stocked-up at the InterMarché, a short distance through town, laying in enough for the long Bastille Day weekend. On Sunday morning we wandered through the weekly market in the town square, but found nothing of interest, so we walked along to the InterMarché for fresh fish and a few vegetables. Many supermarkets in France are now opening on Sunday morning, but other businesses, like the big BricoMarché hardware and building supplies store beside the InterMarché remain closed. To fill the need there are now large mobile shops offering Sunday counter service and scheduled roadside pick-up of online purchases. The line-up attests to its popularity. 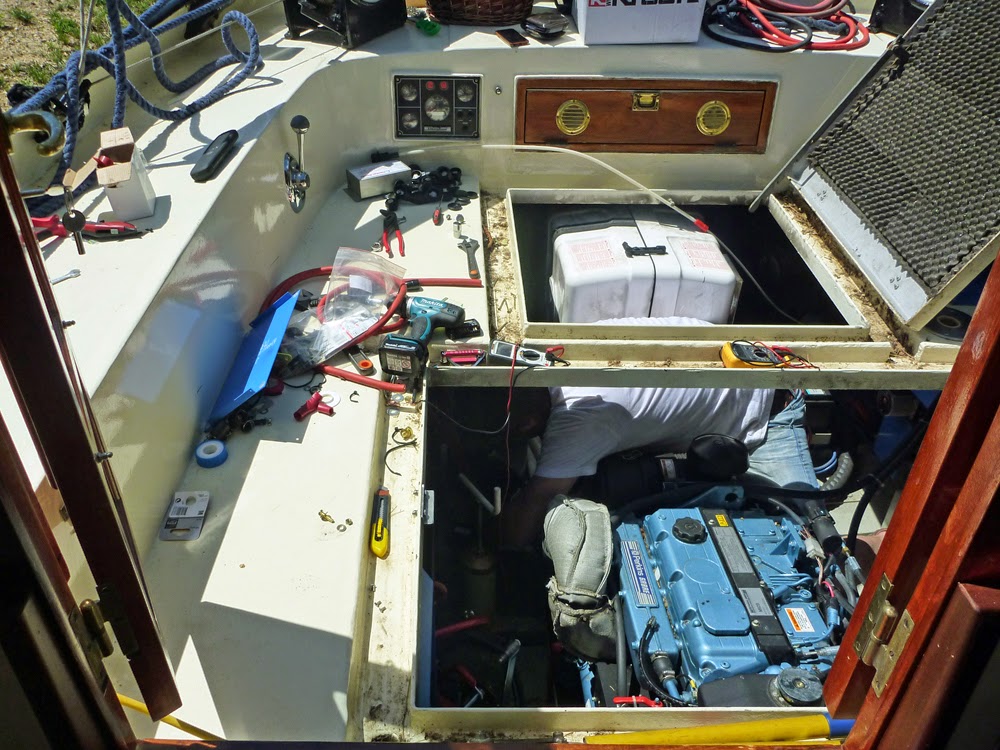 Shortly before 0800 on Bastille Day there was a knock on the hull as Wychard arrived from Harlingen with an engineer and a wagon load of tools, spare battery cells and parts to repair or replace a few little arisings from our first year of cruising since our refit. After coffees, they set to work trying to sort out the problem with the battery. They redid all the tests I had done and also came-up stumped. 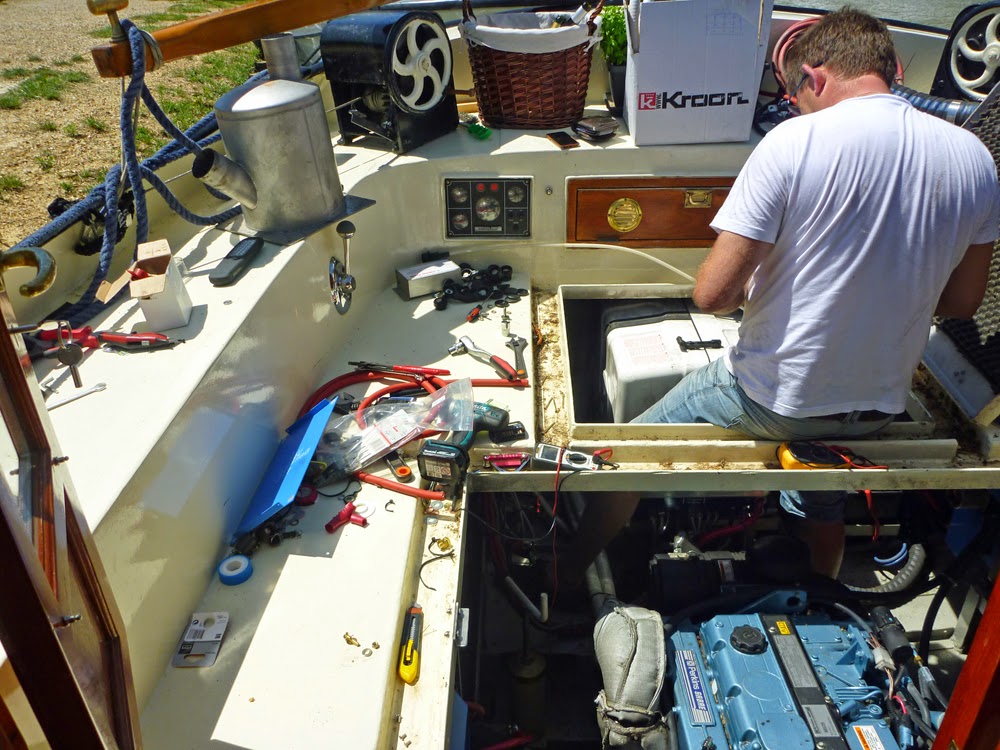 After more than three hours of troubleshooting and eliminating the Victron inverter/charger as the culprit, they began the task of dissembling and removing the battery. This entailed first removing the exhaust cooling system for the engine and generator to make room to remove each of the twelve cells. 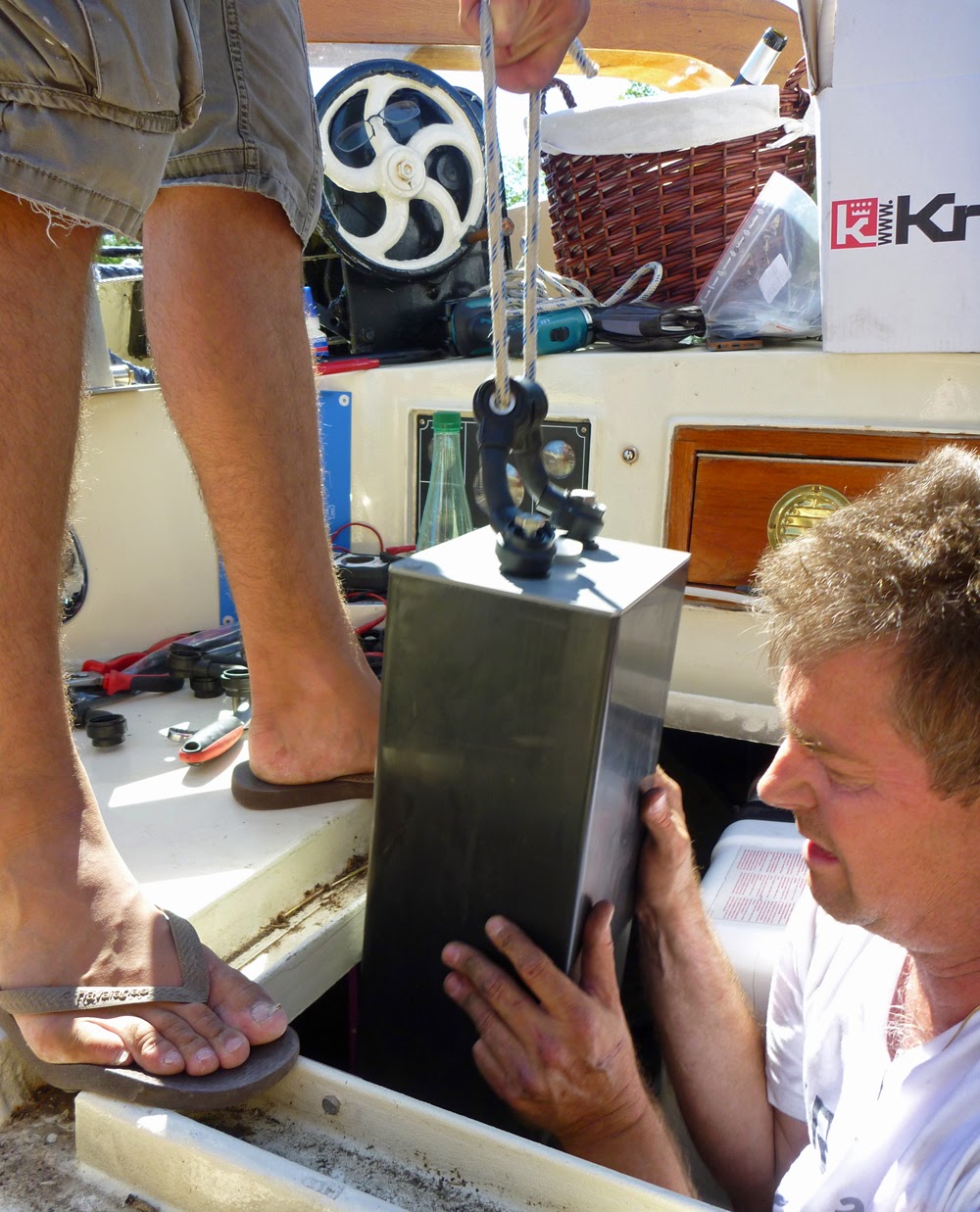 With each cell weighing 48 kilograms, removal from the confined space was not a simple task. 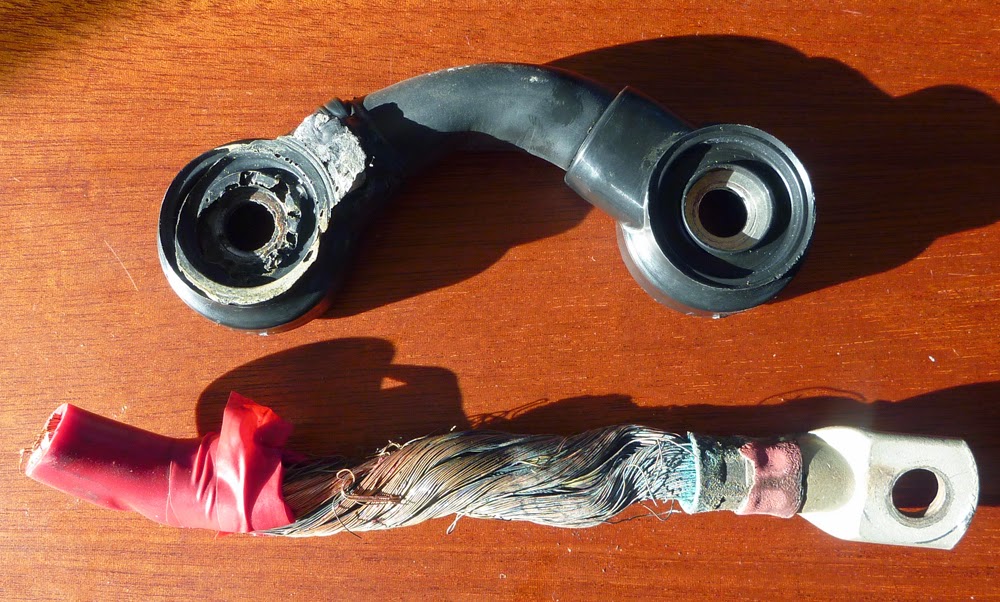 As one of the final cells was being disconnected, Wychard found a faulty connection. It appears that the installer had failed to properly tighten the connection and it had arced and led to the death of the battery. 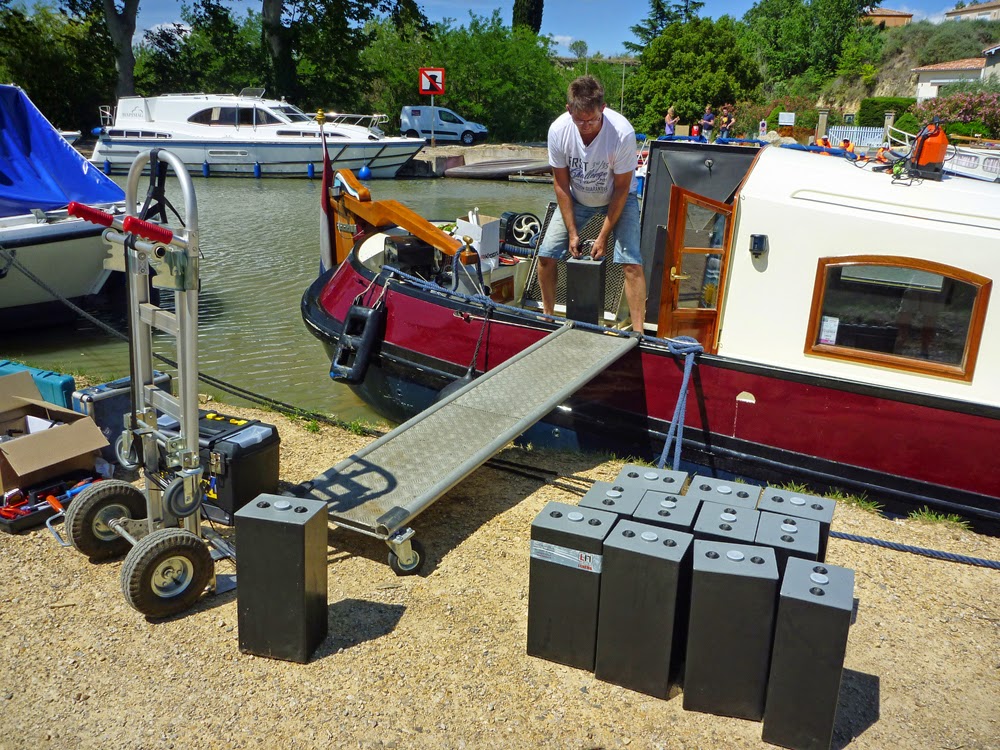 By the time the last cell was ashore, it was well into the afternoon and the temperature was pushing past 35º, so we paused for lunch. Edi made a huge platter of ham, cheese and avocado croissants and the men devoured them. 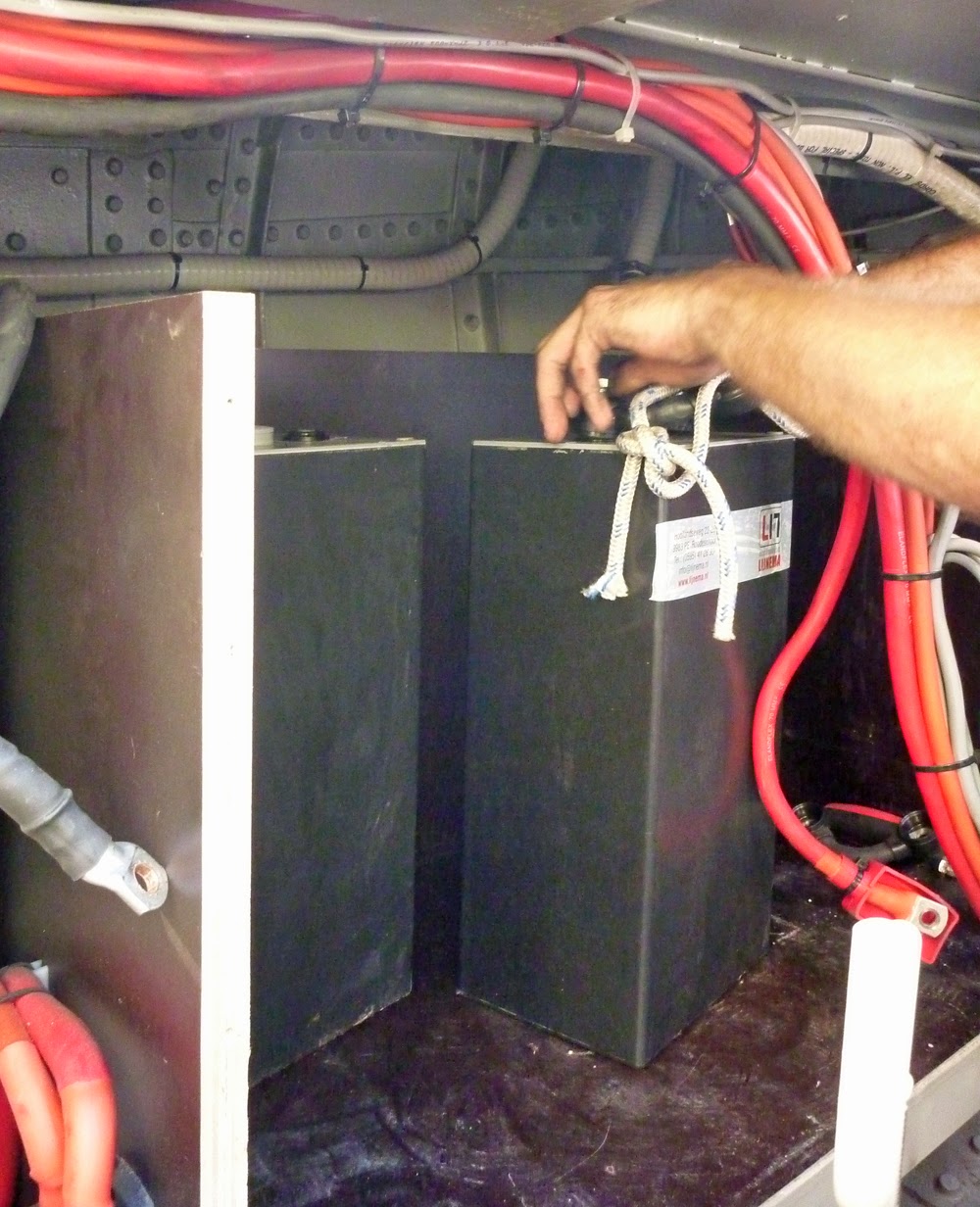 After the pause, the men continued with the task of lugging twelve new cells up the ramp, lowering them into the engine bay and moving them into place in the battery box. The temporary replacement battery they had brought from Harlingen was only 550 Amp-hours at 24 volts, less than two-thirds the capacity of the dead battery, so each cell was that much lighter and easier to maneuver into place. The two dozen internal connections were remade, as well as the connections to the inverter/charger, the generator, the engine alternator and the monitoring instruments. Late afternoon, the switch was thrown, the battery took over domestic chores through the inverter and the shore power connection began topping-up the battery. The system was again working properly. 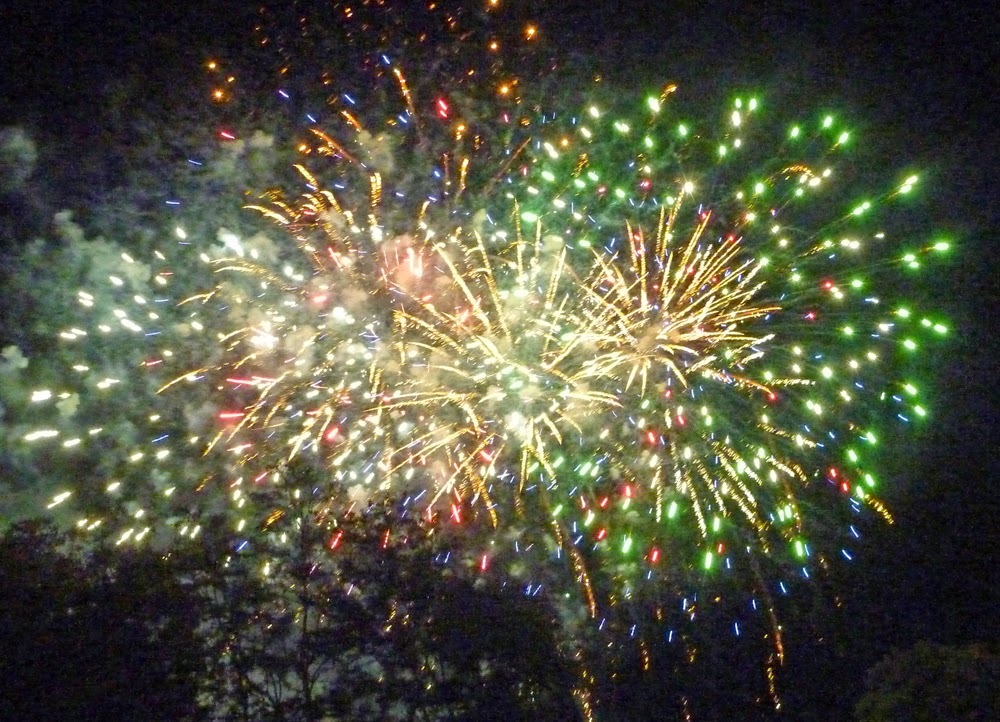 Attention was then directed to replacing the Webasto heater in the galley. It had blown a connection in April and I had bypassed it. Based on photos of the ruptured piece that I had sent him, Wychard had brought an entire new heater. It was close to dusk by the time the two men had completed adjusting the water heater and central heating furnace and had repaired the air leak in the domestic water system and packed-up their tools and equipment in preparation for their fourteen-hour drive hack to Friesland. Not long after they left, the celebratory fireworks began. The French viewed them as celebrating the beginning of their socialistic system, while we viewed them as celebrating the restoration of our carefree independence and freedom of movement.
Posted by Zonder Zorg at 14:43