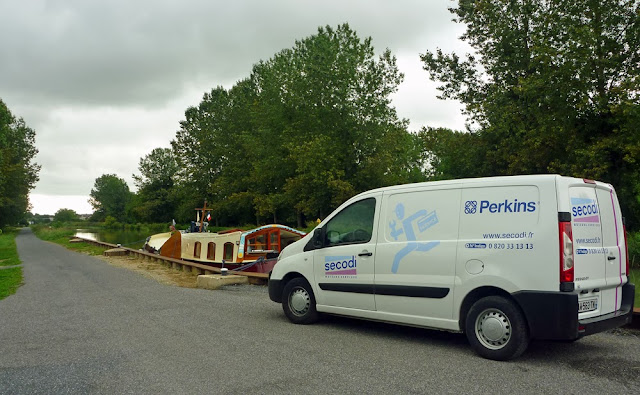 On Friday the thirteenth of September, my sixty-ninth birthday, we were interrupted mid-breakfast by the arrival of Julien, the technician from the Perkins distributor. The parts he had ordered had arrived and he did the two hour drive from Beauvais in a little over ninety minutes to come and install them and to clean the bilges from the diesel and coolant leaks. 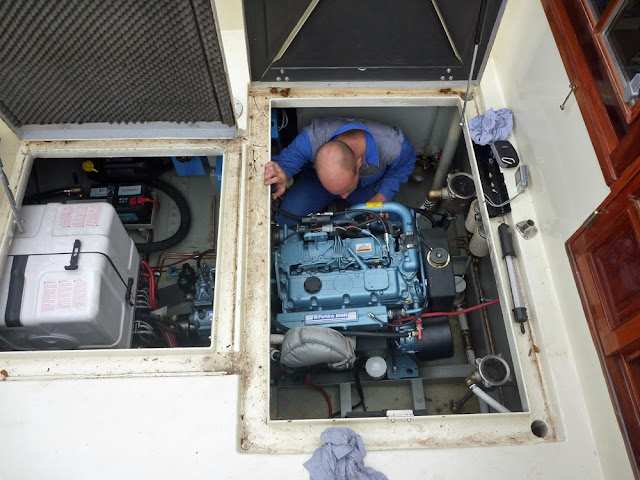 After he had replaced the jerry rigged coolant return line with the proper part, Julien tracked-down the new coolant leak that I had reported after our trip from Sillery to Ay. The coolant reservoir overflow had simply spilled over the engine and into the bilges. 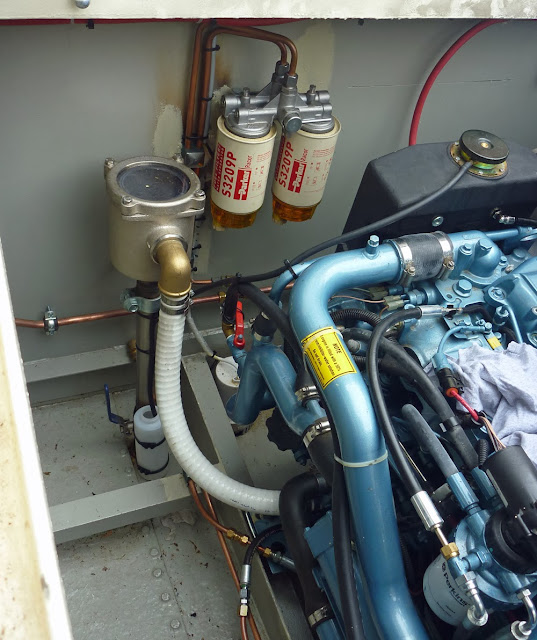 He added a line to the overflow spigot and led it to a plastic bottle he strapped to the raw water inlet at the bottom of the bilge. This is not as elegant as an expansion tank, but at least now any overflow will have a better place to go. After Julien had finished the installations and cleaning of the bilges, he did a long engine run, both free turning and under load at low, medium and high revolutions to see if there were any more problems. 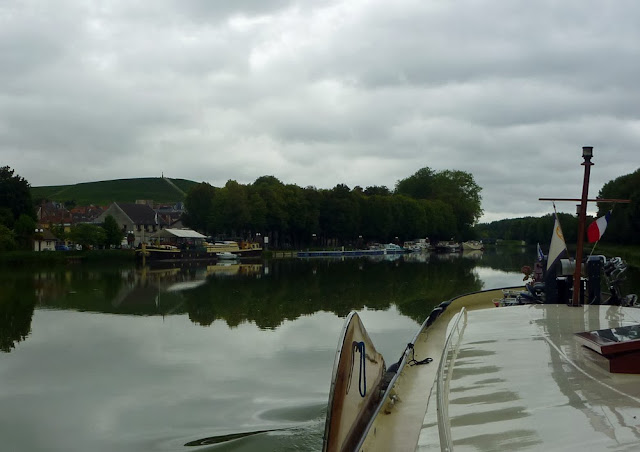 Finally, with the repairs, cleanup, testing and warranty servicing paperwork done, Julien headed back toward Beauvais and we began retracing our route back up the Canal Latéral à la Marne.  As we again passed the halte nautique of Mareiul-sur-Ay, it looked even more unattractive than it had the previous week on our way down. 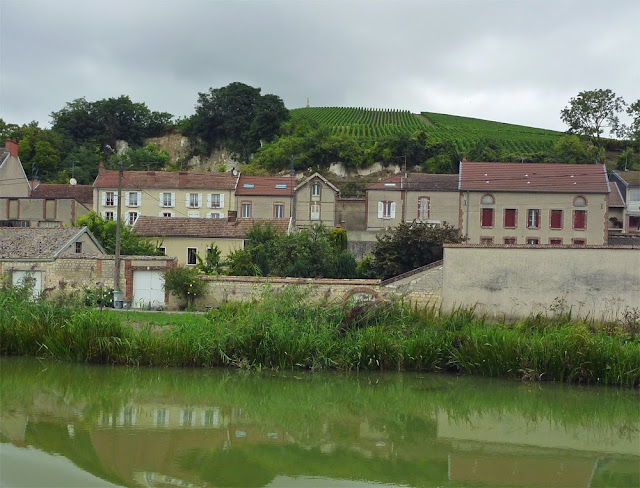 Of more interest to us were the vineyards planted to the brink of the chalk cliffs above the town of Mareiul.  In years past I had marvelled at vine roots poking out of the cliff face six and more metres below the vineyards. 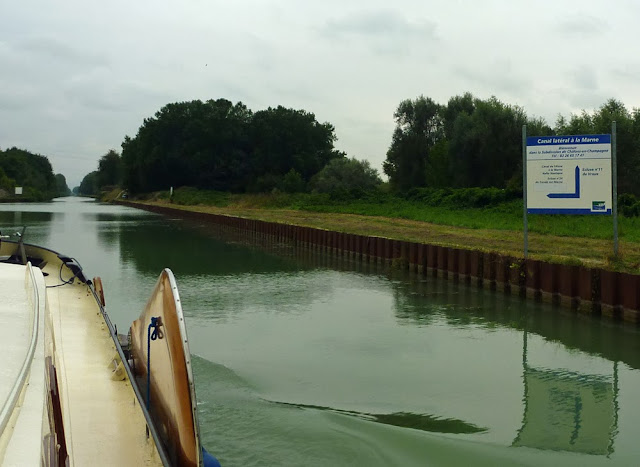 After two locks, we came again to Condé-sur-Marne, where instead of heading back up the Canal Aisne à la Marne, we continued straight along Canal Latéral à la Marne. 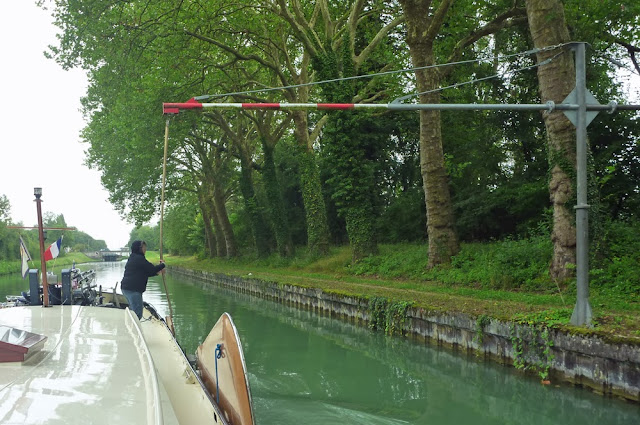 The lock controls along this section of the canal continue with the dangling wand. By this time Edi was an expert at grasping and twisting the wand as we passed by. 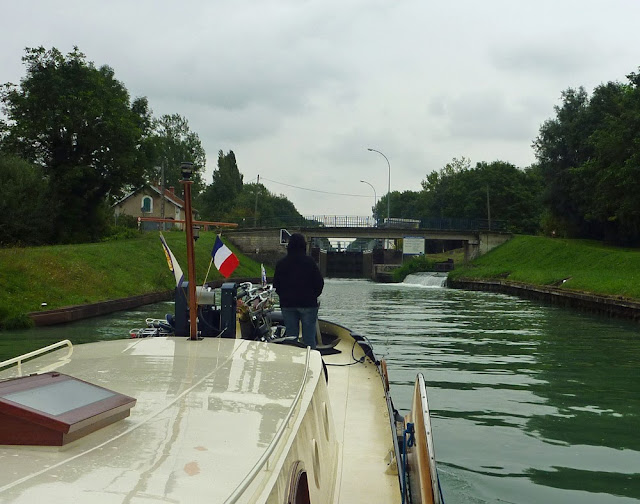 From four kilometres back we had seen a large white object at the entrance to the lock, and as we approached, it had become clear that it was a very poorly designed overflow sluice. It was directing a large volume of foaming water across the canal just before the entrance to the lock chamber. As we neared, I tried to assess the strength of the crosscurrent so that I could compensate. Previous experience told me that as our bow reached the narrow current, it would swing to port, but to not correct; the stern would be almost equally swung as it met the current. The trick is to correctly estimate the amount the barge would be offset and to then compensate by steering that amount off centre on the approach. At this lock, with the sluice so close to the entrance and with its stream so strong, there was little margin for error. To approach too slowly would place us too long in the current; to approach too quickly would risk serious collision damage to the barge if the estimate of the current’s effects were wrong. 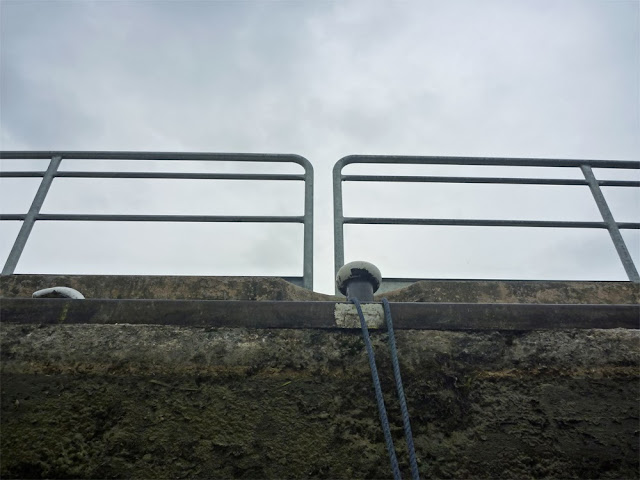 My estimates were close, and with some heavy engine, tiller and bow-thruster work, we ran through the current and its resultant eddies and countercurrents and made it into the chamber with only a few fender bounces. Once inside we saw that the lock had another trick to play on us. The mooring bollards are set in small concrete bays, with only about fifteen centimetres space to allow a tossed line to fall into place. Complicating this, the safety geeks had placed railings to protect the public and to further hamper the boater in looping the bollards. To make the situation even less comfortable, it began to rain again. 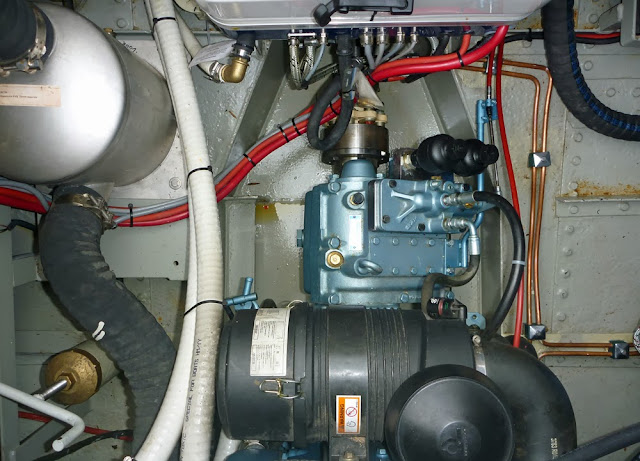 After two more locks and a total of 35.8 kilometres, at 1630 we backed onto a five metre finger pontoon in the halte publique in Châlons-en-Champagne and dropped the spud pole to secure the bow. When I did my post-run engine room check, I was disappointed to see a small puddle of fluid in the bottom of the bilge. Hoping that it was merely residue from the previous leaks that had finally made its way down from puddles in the engine’s nooks and crevices. 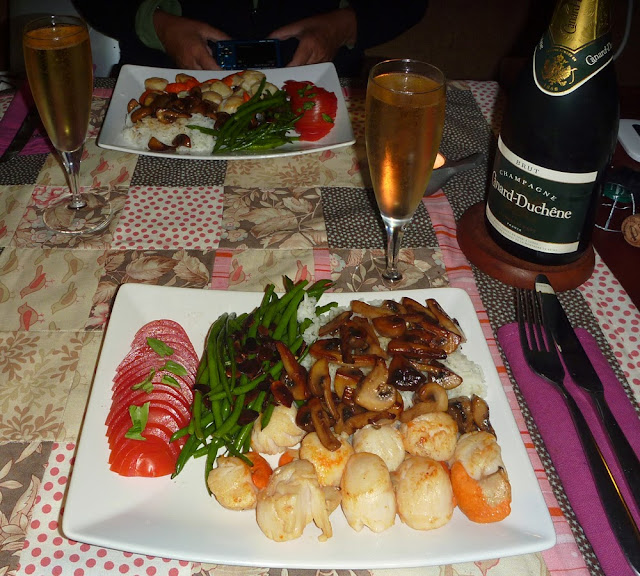 To cheer things up, in the evening I prepared seared St-Jacques and served them with mushrooms sautéed in butter and Armagnac over basmati rice with haricots verts fins amandine and roma tomatoes. We celebrated my sixty-ninth birthday with a bottle of Champagne Canard Duchêne. 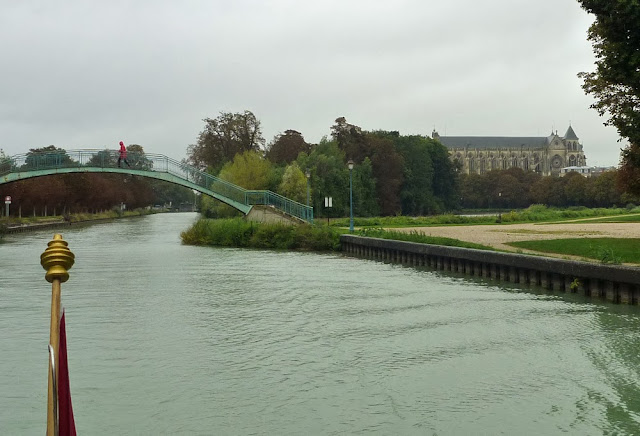 It was raining on Saturday morning as we raised the spud pole, slipped our lines and continued up canal. It continued to rain, varying from heavy drizzle to heavy downpour as we worked our way up eight locks and along 34.1 kilometres of canal to Vitry-le-François. 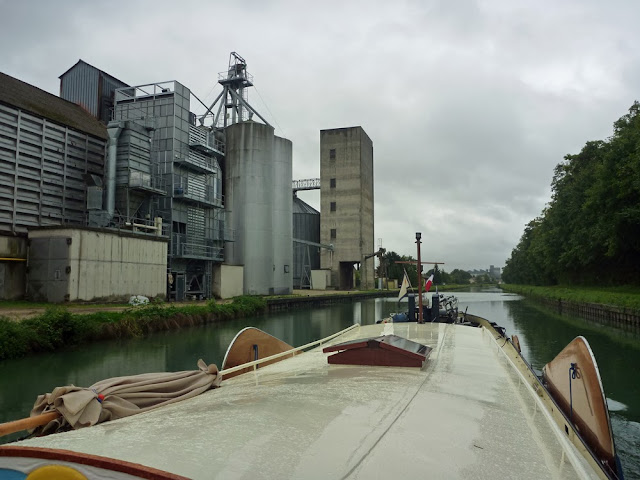 For the first while we passed rather bland canalside scenery, much of it grain elevators; this area is the breadbasket of France, with huge fields of grains, mostly wheat. 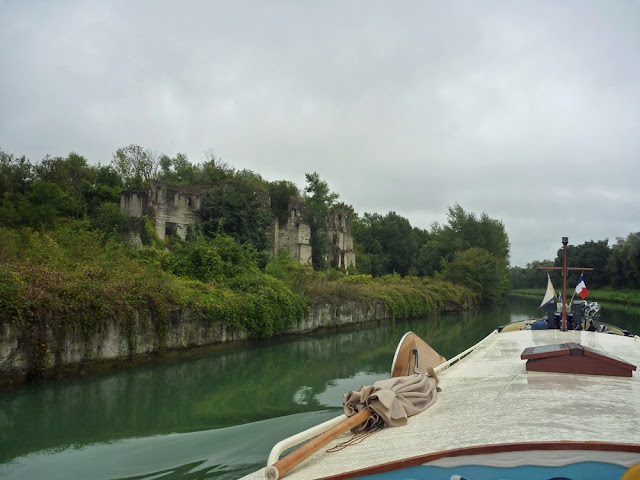 Along the way there were remnants and ruins of industrial efforts from the early nineteenth century as France tried to emerge from the disasters of the Revolution and the Napoleonic era. 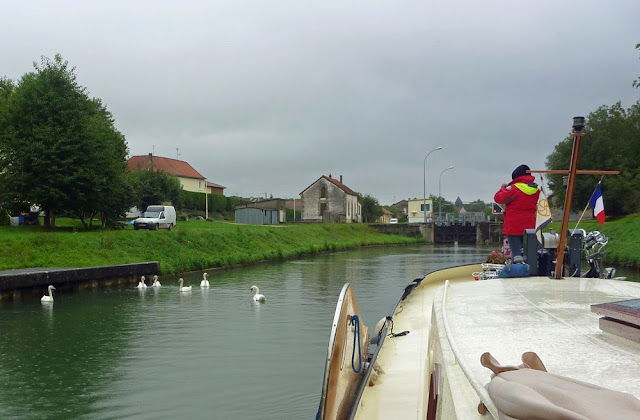 Further along the swans posed gracefully for us as we waited for a lock to prepare for us. 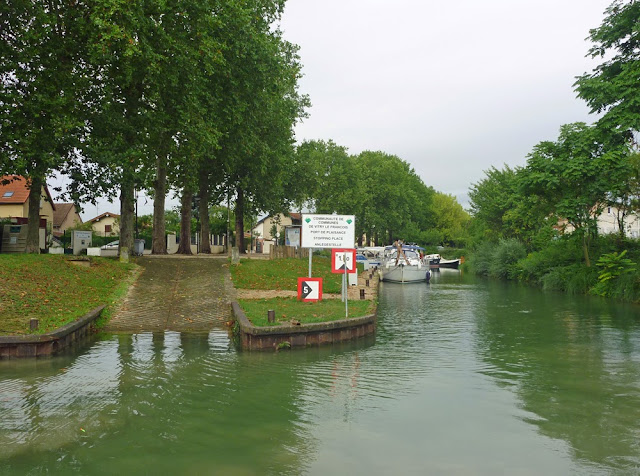 The rain had eased to a fine drizzle at 1600 when we reached the end of the Canal Latéral à la Marne. At the T-junction we turned right and started along Canal Entre Champagne et Bourgogne. Within a kilometre we arrived at the port de plaisance of Vitry le François. Fortunately, one of only two spots capable of taking Zonder Zorg was empty, so we quickly manoeuvred to fill it. 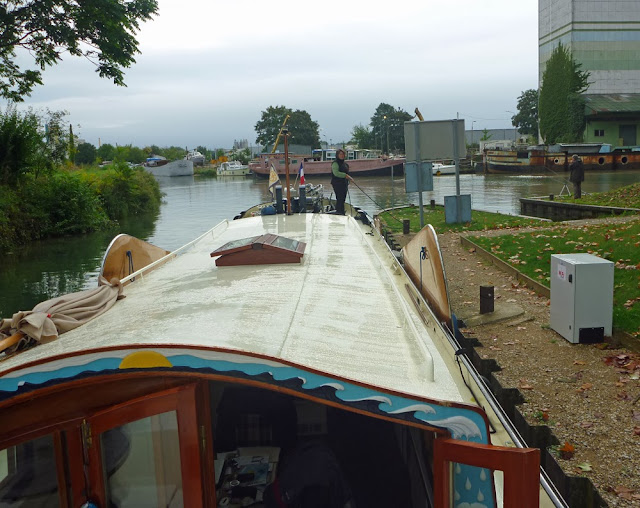 We wore around and backed into the space and secured alongside at 1620. According to the sign on the gate, the Capitainerie closes at 1600 and is closed on Sundays, so we had no way to pay for our overnight moorage unless we stayed until Monday. Memories of the town from a previous visit in 2003 in my previous canal boat, Lady Jane, plus the fact that everything would be closed on Sunday, quickly ruled out a two day stop. 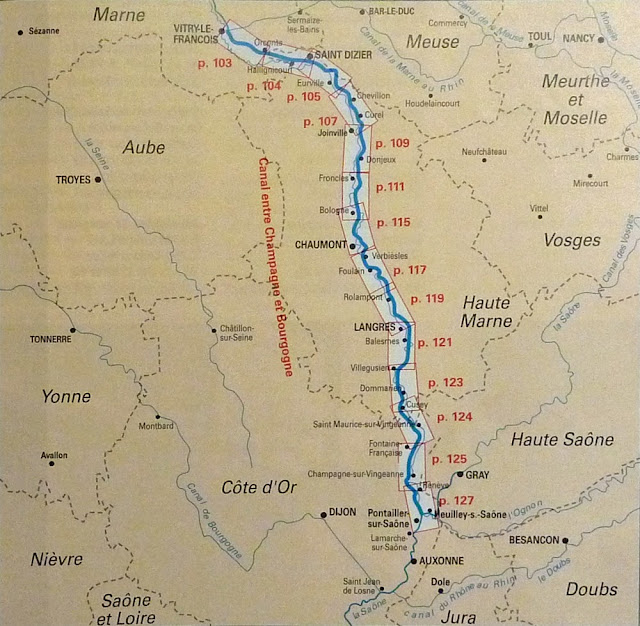 Ahead of us was a climb of 239 metres with 71 locks in 155 kilometres. This would take us to the summit pound and a 4.8 kilometre tunnel through the top of the pass, before starting our descent of 156 metres over 43 locks and 64 kilometres to the Saône at Heuilley. Hopefully, once we reach the summit and start down into the Burgundy, the near-steady rain of the past week will have stopped.
Posted by Zonder Zorg at 03:26