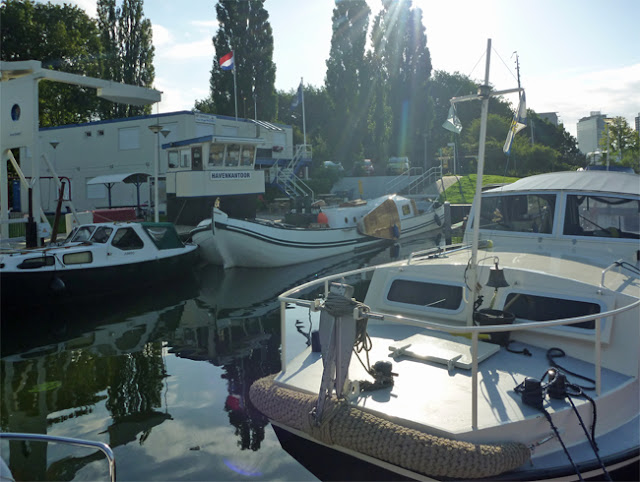 We waited until nearly 1030 on Saturday the 15th of September for the boats on the slip across from us to leave. We then had room to swing Nieuwe Zorg's bow across to port the eight or so metres to the corner of the pier, from where it could be squeezed by hand past the corner. My calculations had been correct; she was about ten centimetres shorter than the space available, and with her bows past the corner, we were be able to motor forward out of the marina rather than having to back out.

We had thoroughly enjoyed our four day stay at SixHaven. With the free ferry to downtown Amsterdam a less than five minute walk away, it is a very convenient place from which to enjoy the city. Shortly after 1030 we slipped and headed out into the Noordzee Kanaal and almost immediately left it and entered the Noordhollandsch Kanaal and the Willemssluizen. In the lock we were joined by a cruiser named Stormvogel. The skipper pointed to his 't Eiland burgee from Aalsmeer, and said "that's Henks old boat". 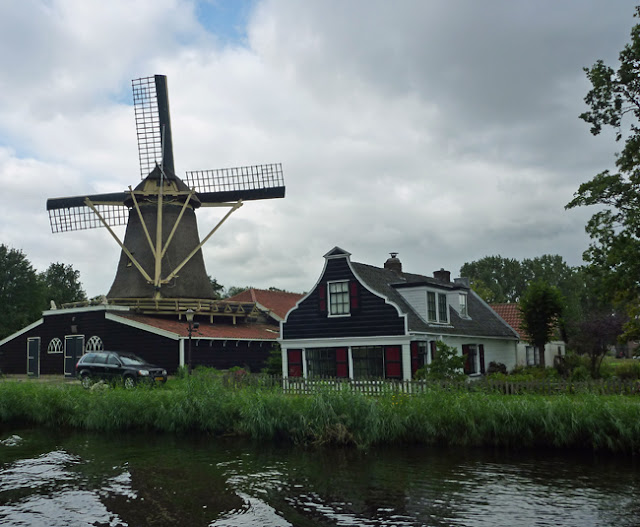 We locked through and slowly made our way past an amazing assortment of liveaboard vessels in a decreasing level of quality and care the further from the city centre we went. The vessels gradually decreased in frequency, and then ended with a few derelicts. We were out in the open country, with the cattle and sheep, the farmhouses and the windmills. 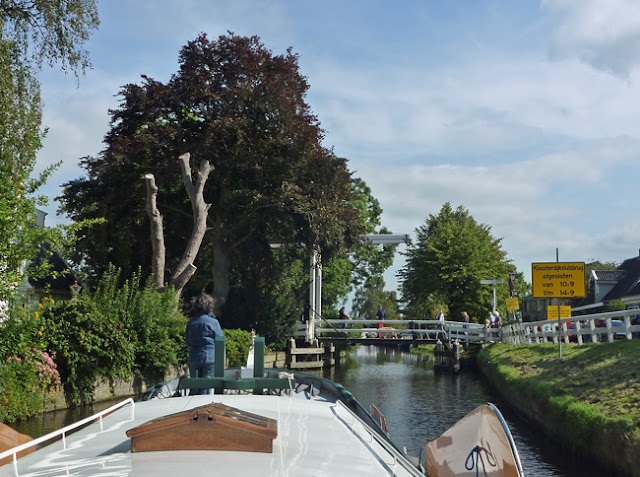 At 1145 we entered the Monnickendam-Edam Kanaal and at noon were motoring along the narrow canal past a near-solid line of dike houses in Broek in Waterland. Each of the houses has a foot ferry to cross from the road on the one side to the otherwise-isolated house on the other. At 1220 we arrived at the first bridge than needed to be lifted for us, and we moored to a bollard and a pounded stake on the left bank while we waited for the bridgekeeper to arrive. The keeper arrived and let us through the bridge, and then through a second one a bit further along. 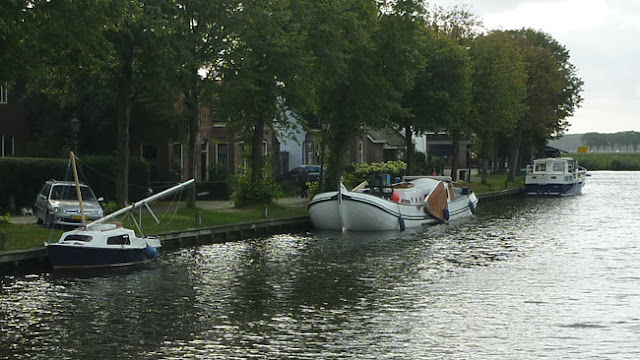 In Monnickendam, we stopped in the approaches to the lock to await the lock keeper's return from lunch, and then shortly after 1400 we began locking through. Two other boats came through with us, both of them turning right and heading through Monnickendam to the Markermeer, while we turned left up the Stinkevuil of Purmer Ee for a kilometre or so until turning right up the Purmer ringvaart and bypassing the two low bridges on the Trekvaart Het Schouw. A bit less than an hour later we turned off the ringvaart and into the Oorgat through Edam. At 1520 we secured starboard side to on the right bank in a residential area of Edam, just short of the start of a series of six low bridges that we needed lifted. 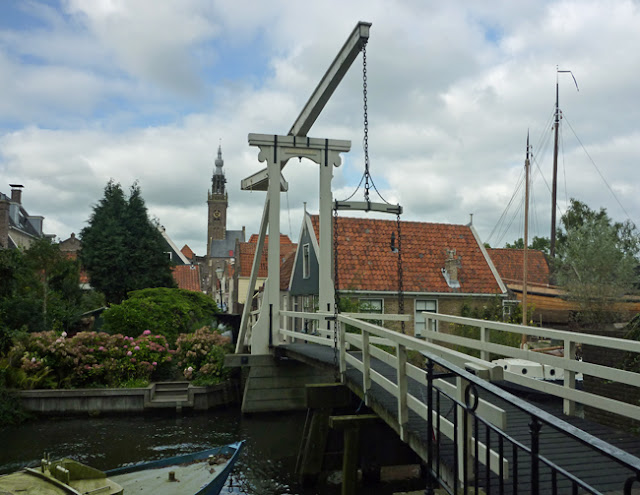 Among the bridges we needed lifted is the Kwakelbrug, for which Edi's great-grandfather was once the toll keeper. We walked the short distance through Edam to the bridge, and saw in the shipyard next to it a kwak hauled-out on the ways and having her wooden bottom repaired. 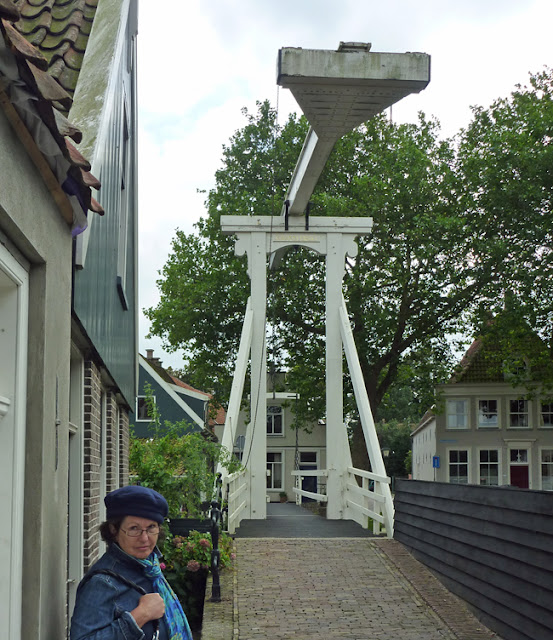 The shipyard in directly behind the house in which Edi's great-grandfather and grandfather had once lived. Edi paused at the front door and thought back a century and a half. 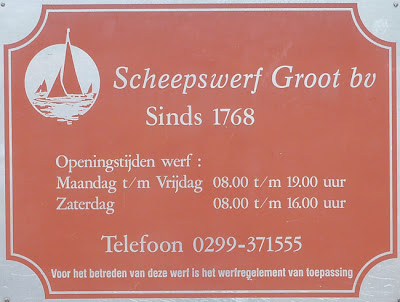 Next to the house is a gate that leads to the boatyard, and on the gate is a sign signifying that Scheepswerf Groot has been in business since 1768 in the side and back of the house. We later learned that it traces some of its roots to the golden era of shipbuilding in Edam in the seventeenth century. 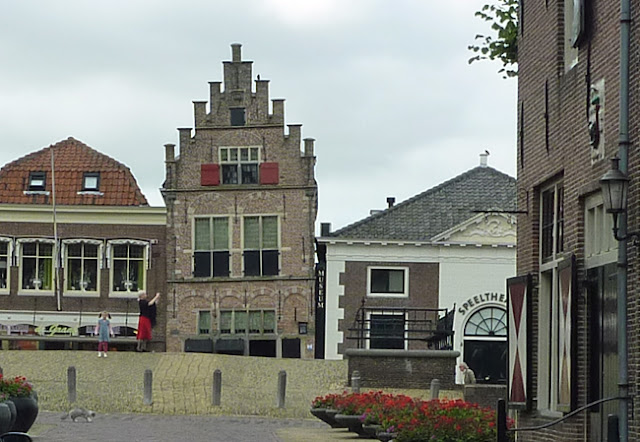 We continued along to the Edam Museum, which is housed in a house built in 1550. Our museum pass gave us entry and the loan of small audio guide players, which are triggered by proximity switches to explain the various displays. 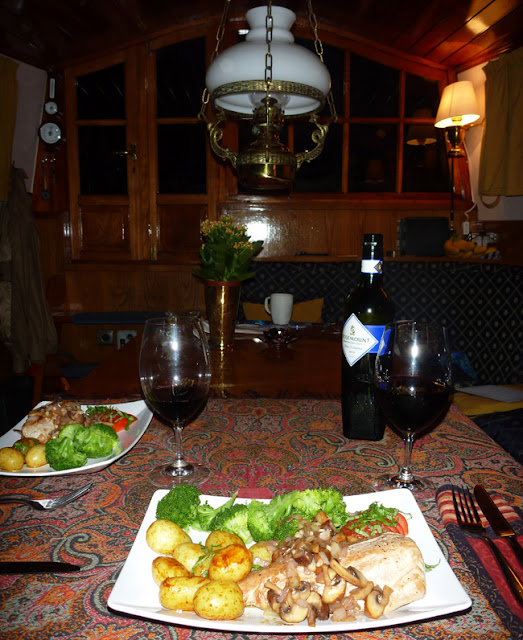 We wound our way back to Nieuwe Zorg and in the evening I prepared pork tenderloin with a crimini, shallot and garlic sauce, boiled baby potatoes and steamed broccoli, garnished with sliced tomatoes with shredded fresh basil.

On Sunday we explored the back lanes and small streets of Edam and relaxed onboard. On Monday we walked along the dikes to Volendam and among other things, enjoyed a fried sole sandwich from a waterfront fish shop. 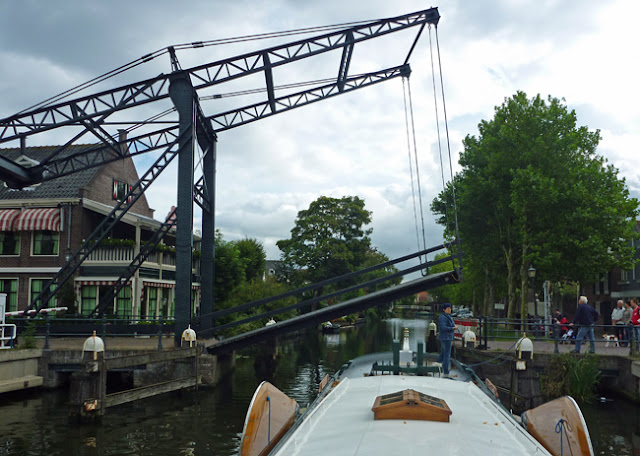 We had spoken with the bridgekeeper on Saturday and learned the routine for passing through Edam. The descending schedule is 0930, 1130, 1400, 1600 and 1800, so on Monday morning at 1130 we set off. The first lift is a pair of wide, heavy traffic bridges, which leads to a short pound of about 25 metres length, where we needed to stop and wait for the keeper to close the two bridges behind us and restore traffic flow. Then the keeper pedalled down through a tunnel under the main roadway and began working on the third bridge while Edi held our bows to a pilon and I held the stern to another. 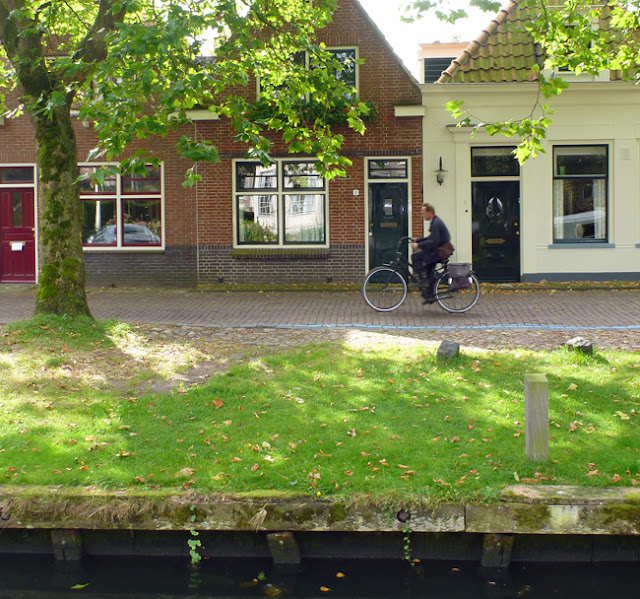 Once clear of the third bridge, we motored and drifted very slowly toward the Kwakelbrug, while the keeper pedalled along the canal bank to prepare the bridge for us. 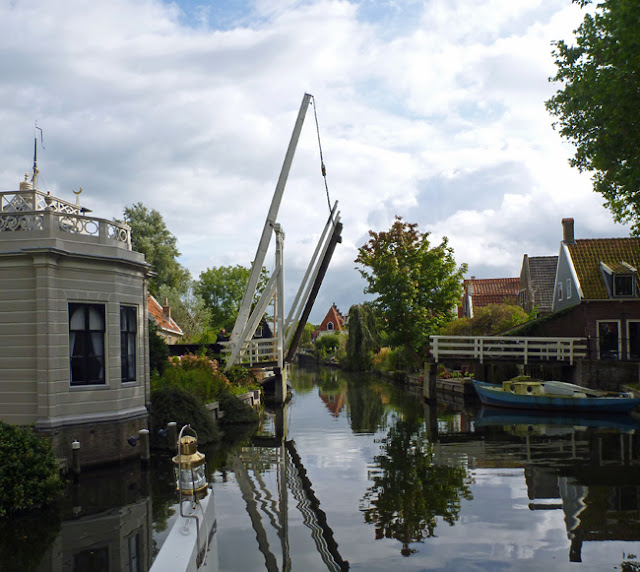 The scene was idyllic as we slowly passed through the narrow wooden footbridge that Edi's great-grandfather once tended. 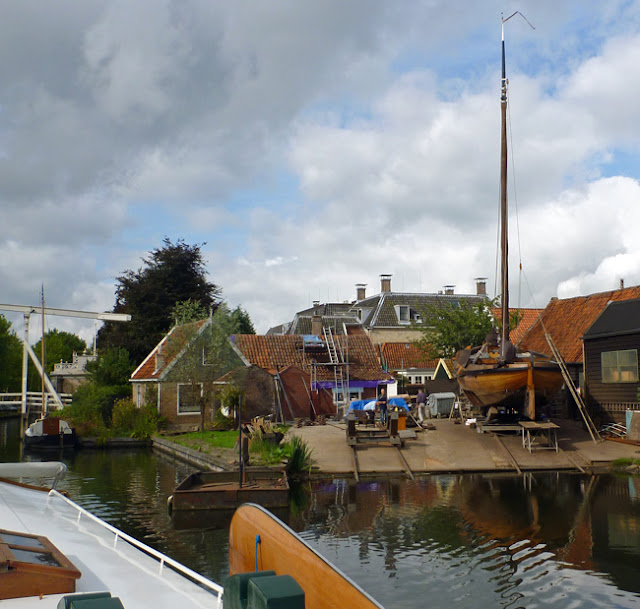 Looking back to the Kwakelbrug, we saw how close Edi's great-grandfather's house and the Kwakelbrug are to the boatyard, Scheepswerf Groot. She then recalled that her great-grandmother's maiden name was Groot. Bells rang! Some further investigation is certainly warranted. 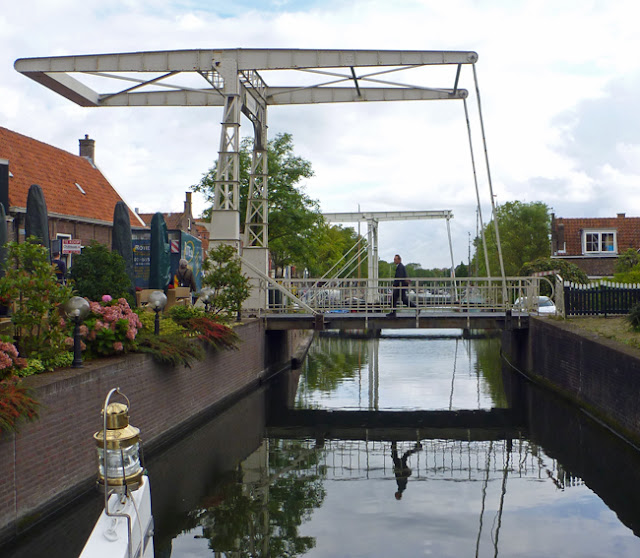 As we slowly drifted down canal, the keeper pedalled ahead and began preparing the fifth bridge for us, closing gates to stop traffic, unlocking the mechanisms and activating the electric winch. 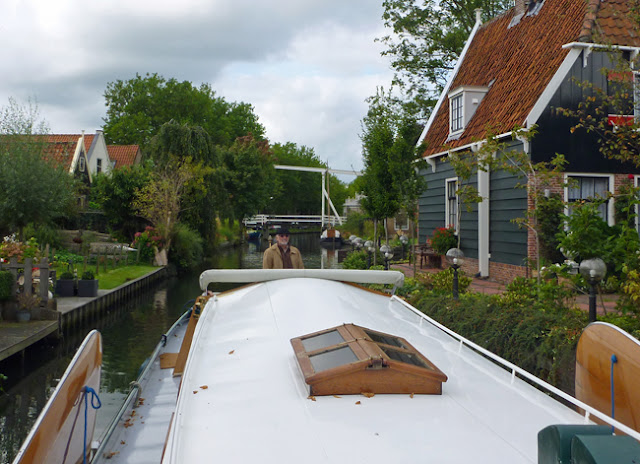 The canal is narrow, and passes through marvellous scenery, including the patio of the Hotel Fortuna, where we had sat on Sunday afternoon enjoying coffee and appeltaart. The sixth bridge is opened by hand, and as we passed under it, the bridgekeeper told us we could duck under the next bridge, the last one before the lock which would lead us out into the Markermeer. 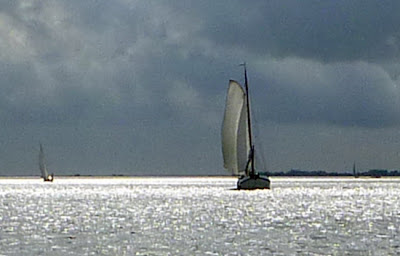 As we approached the lock, the lights turned red and green, indicating that it was being prepared for us. We easily locked-through, and at 1221 we entered the Markermeer and turned northward. On the lake with us was a great variety boats, mostly sailing craft. Among the sailing craft were many old vessels, and as we motored north at 6 knots, we were slowly overtaken by a tjalk under sail. 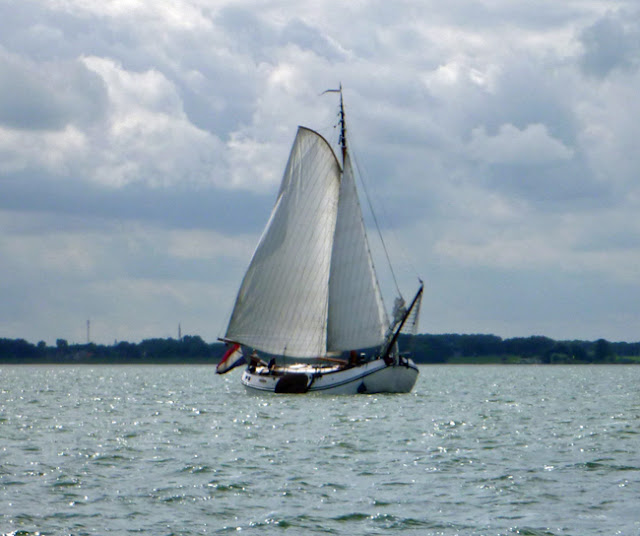 The wind was blowing offshore about 12 to 15 knots and it was a wonderful beam reach for all of the boats sailing north and south along the coast. Without rig; however, Nieuwe Zorg had to contend with motoring with a steep chop slapping at her port beam. 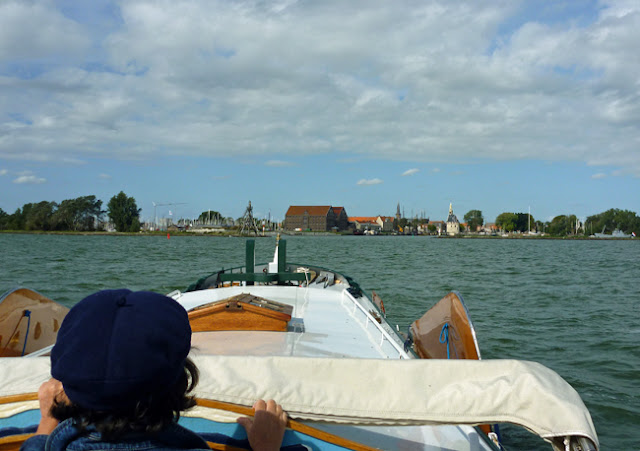 At 1400 we were in the entrance to the harbour in Hoorn, deciding which place to try first for moorage.  As we neared, Grashaven appeared the natural choice, so we entered and quickly found a guest dock with a small cabin and an intercom to the office. We were given a berth across the end of a finger and we moved to it and secured. We were in Hoorn, the place after which Cape Horn had been named, so in a way it was closing the loop on our rounding of the Cape in February.
Posted by Zonder Zorg at 02:26