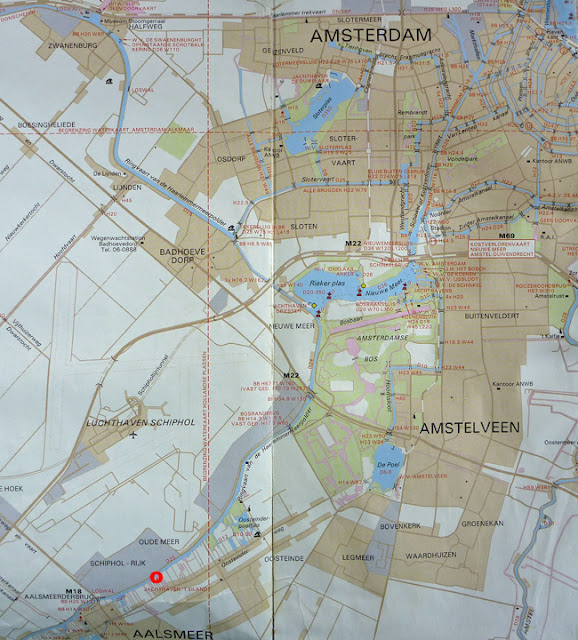 By our third day aboard Nieuwe Zorg we had become familiar with the skûtsje's systems and had settled in. I hauled out the ANWB charts and began looking at possible routes northward to Harlingen. The first leg was easy; turn right and follow Ringvaart van de Haarlemmermeerpolder to Rieker plas, through it to Nieuwe Meer and along it to Nieuwemeersluis, through the lock and into Schinkel of Kostverloren vaart, which is followed northward to the Noordzee Kanaal. 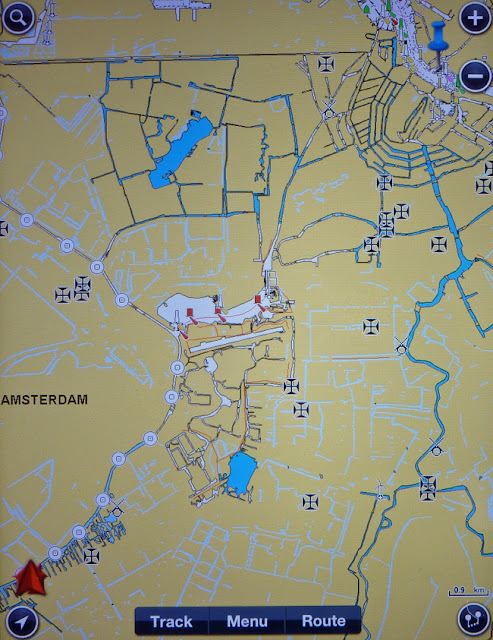 I also looked at the route on the Navionics app on my iPad. It confirmed that the lowest bridge along the route was 2.44 metres, so with our air draft of 1.95 metres, we would not have to wait for any bridges to open for us. I looked at jachthavens close to downtown Amsterdam, and seeing that SixHaven, directly across the IJ from Central Station was the most convenient, I phoned the number listed on the iPad app and made a reservation for three days from mid-afternoon on Tuesday the 11th.

On Monday morning, while Edi was boiling water for coffee, the propane tank ran dry. The spare tank was also empty. This was our signal to call Henk to take him up on his offer to drive me and the empty tanks to a refilling station. He arrived within five minutes of my call, and we loaded the two 35-litre tanks into his car and drove to the local Shell station and up to the AutoGas pumps. The safe 80% fill meant 28 litres in each tank, and at €0.809 per litre, the total came to €45.30. How incredibly simple and convenient compared to the convoluted arrangements we had to put-up with during our circuit of the Americas. 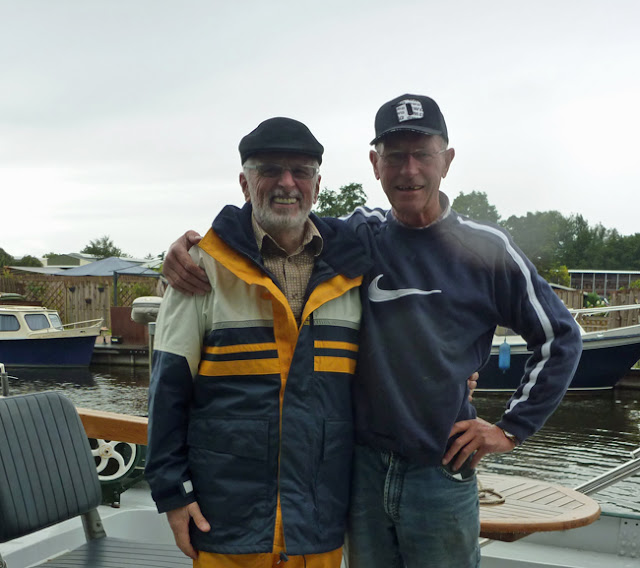 It was drizzling on Tuesday morning when I called Henk; he had asked to be there when we cast off and headed out. Henk arrived and suggested to me that I put on some rain gear, otherwise I'd be drenched by the time we got to Amsterdam; the erected canopy is too high to pass under some of bridges. He dug down into a locker and pulled out a suit that he had left onboard for me. 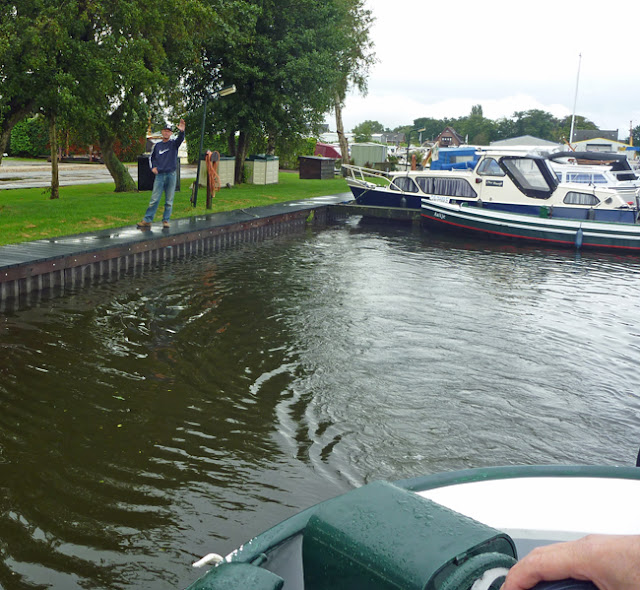 At 1224 we slipped and headed out as Henk watched his cherished skûtsje motor slowly away. For just over thirty-seven years, more than half his life, he had poured his heart and soul into Nieuwe Zorg, and now she was leaving. We all felt lumps in our throats and wet cheeks. 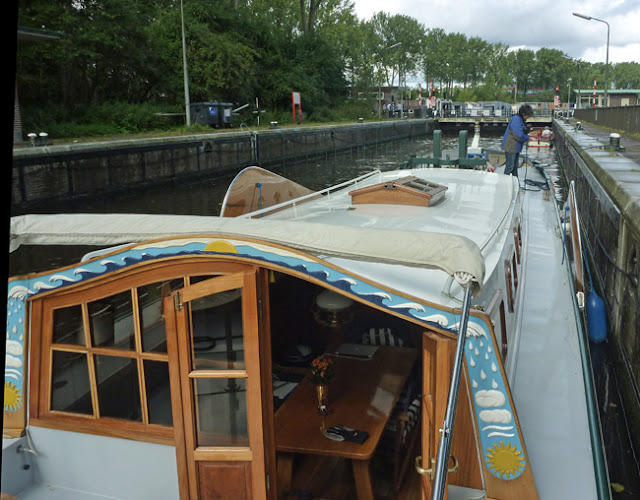 At 1337 we arrived at Nieuwemeersluis and sat alongside some pilings awaiting the cycling of the lock. At 1349 we entered and temporarily secured, waiting for the two small craft ahead of us to move further in so that we could squeeze forward and leave room behind us for a large commercial barge. 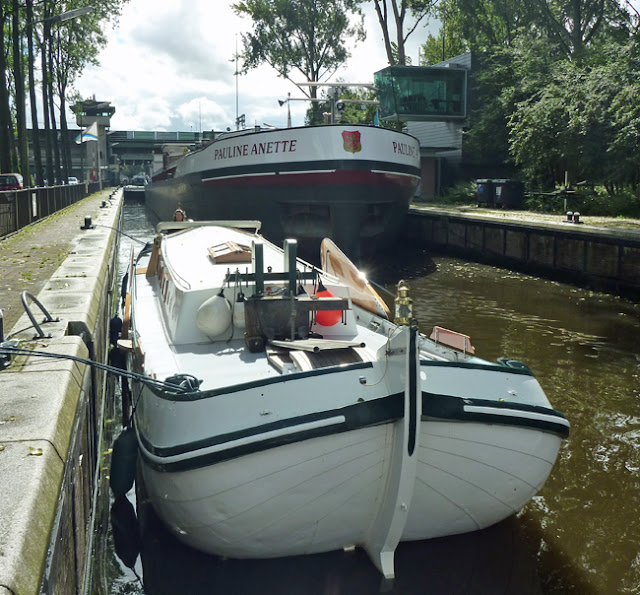 Pauline Anette moved in behind us and secured, then we all rode up about half a meter as the lock filled. Of the many hundreds of locks I have transited in Europe, this first one with Nieuwe Zorg was by far the lowest level change of all. 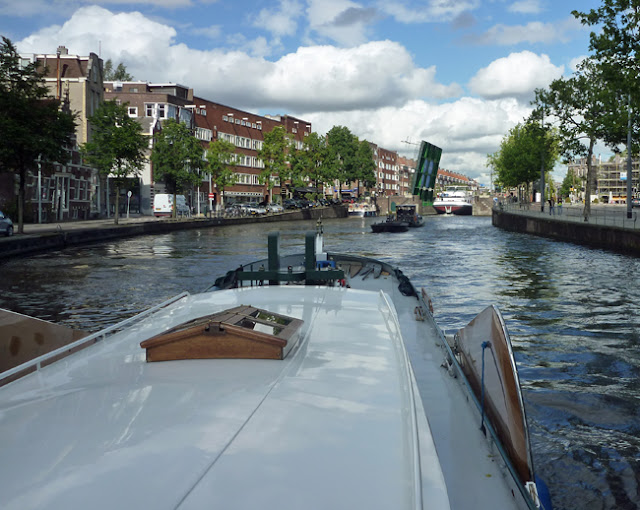 After we were through the lock, we allowed the commercial traffic to overtake us as we motored slowly along the canal enjoying the passing scene. The parade of boats ahead of us all needed the bridges to be opened for them, but at only 1.95 metres of height, Nieuwe Zorg can slip under all the closed bridges on this canal. 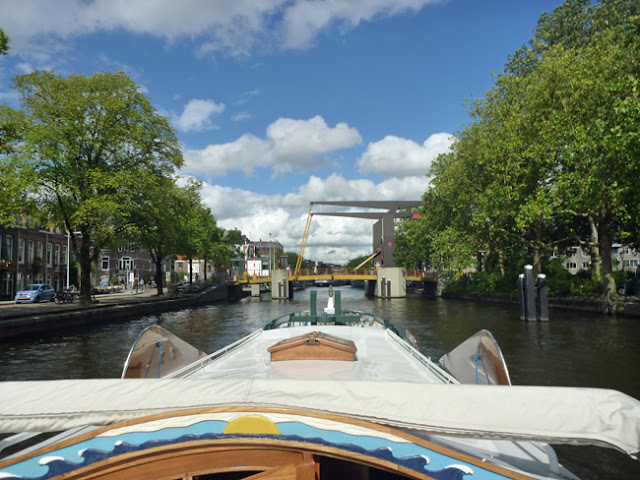 Once the last boat ahead of us passed through each of the bridge cuts, the bridgekeepers all lowered the bridges ahead of our arrival, knowing it wasn't necessary to hold-up road and pedestrian traffic for us. We ducked under eleven bridges as we slowly motored through Amsterdam, admiring the wonderful variety of architecture along the canal sides. 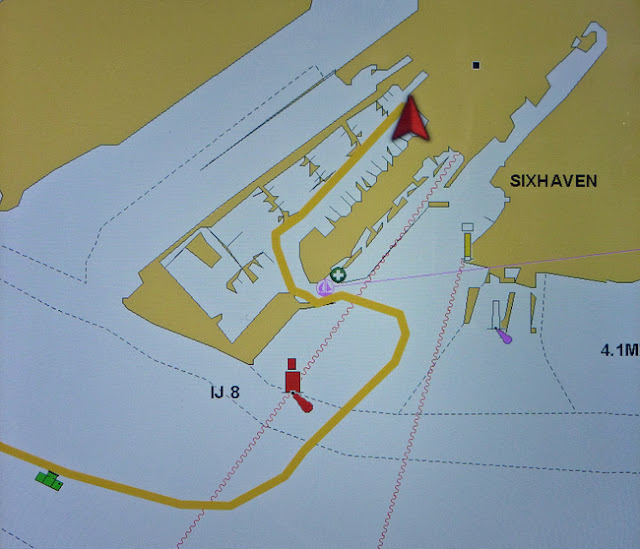 At 1513 we left the canal, enter the IJ and turned eastward through the heavy commercial traffic across the north waterfront of Amsterdam. We located the entrance to SixHaven and threaded our way in through a gap not quite a metre wider than Nieuwe Zorg and then all the way along the narrow alley past jutting bows and sterns to the back of the marina to lie alongside the end wall, directly under the havenkantoor. 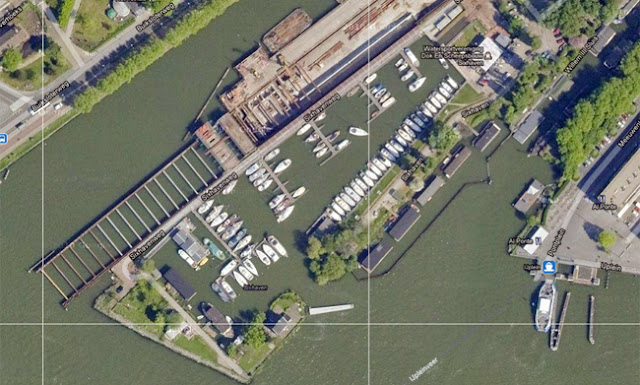 There were boats secured alongside all four of the T-docks, narrowing the passage to under four metres. Fortunately, Nieuwe Zorg handled it superbly, squeezing by with less than thirty centimetres to spare. I am delighted with manoeuvrability and her responsiveness. 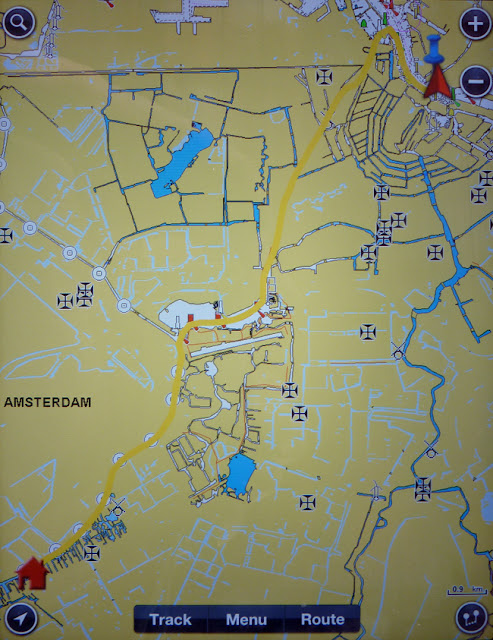 On our first trip since taking possession, we had come 19.1 kilometres. We checked-in and paid €87 for three nights, including electricity, water and wifi. 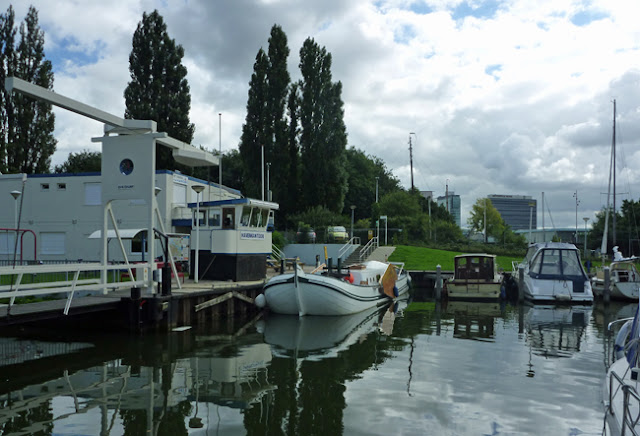 We asked the Havenmeester for directions to the local supermarket and then walked the kilometre or so to it. Disappointingly, it is in an immigrant neighbourhood, and the selection is not what we were looking for. We were; however, able to find sufficient to make do until we find a store stocked more appropriately to our tastes. On Wednesday we walked the few hundred metres from the marina to the free ferry, which crosses the IJ to Central Station. From there we took the Metro southward to Ikea to finish our laying-in of basic equipment and supplies. Unlike in Canada, Ikea here is easily accessible by public transit.

On Thursday we celebrated my sixty-eighth birthday with a visit to the Van Gogh Museum. We took the ferry across the IJ and walked a crooked route about five kilometres through central Amsterdam, enjoying the varying scene. At the museum, instead of the €14 per person entry fee, we opted to each buy €49.90 passes good for one year for entry to over four hundred museums throughout the Netherlands. 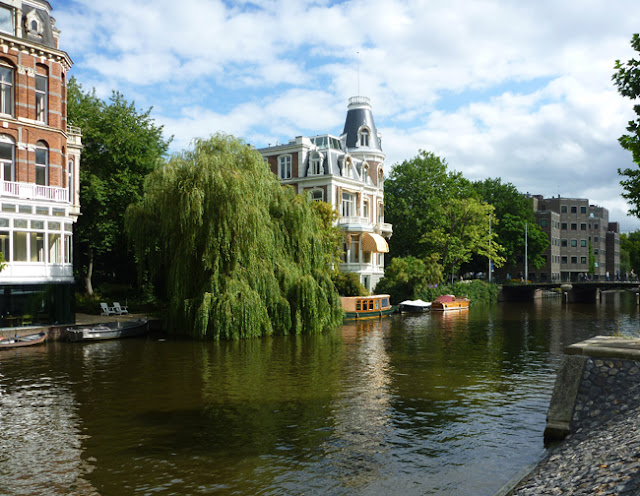 On our way back, we took a different route to see more of the city and along the way we paused near the flower market for coffee and appeltaart in a street cafe. We also did some shopping to strike-off the last few items from our list, and arrived back onboard at the end of the afternoon, refreshed from our ten kilometre walk. 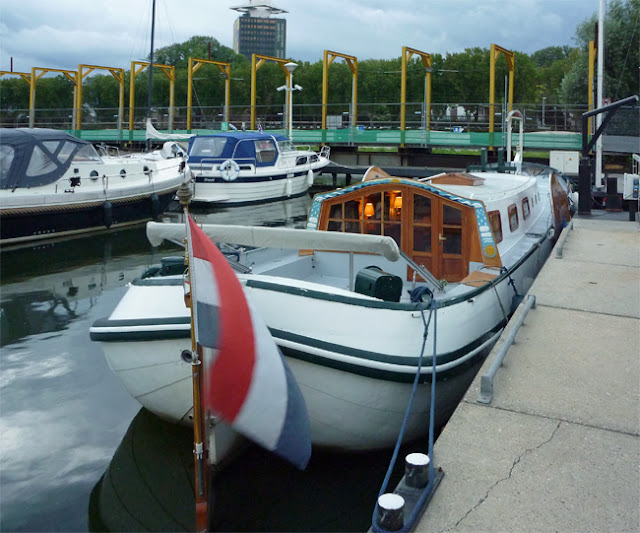 The weather forecast for Friday called for rain with winds above 30 kph. We decided to see if we could stay another day. The Havenmeester readily extended our stay and we settled in aboard, nicely warm and dry as the rains began. By early afternoon on Friday, the hour-by-hour online forecast was predicting sunny periods with a slight chance of rain, so at 1300 we walked to the ferry and rode across to downtown. Through Google, we had located an Albert Hein supermarket just across the Martelaarsgracht from Central Station. We found it a rather narrow, but block-deep supermarket fitted into a patchwork of several old buildings. Because of the confined space, the selection is a bit limited, but what is there is nicely skewed to the upscale end and toward the quality we want. We stocked-up for a few days and were ready to continue northward on Saturday morning.
Posted by Zonder Zorg at 00:21