We continued to attempt to track-down Douwe Albert Visser, who was the owner of Nieuwe Zorg in 1941 when she was re-registered. One of the problems we repeatedly encountered in our online searches was the effect of currently having Albert Visser and two Douwe Vissers as very competitive skûtsje racers, each as skipper of one of the fourteen competing skûtsjes in the annual SKS championship series. Yesterday, Douwe Visser Jzn. skippered his crew in the Sneek skûtsje, Pan to another win, decisively capturing this year's fourteen-day, eleven-race series. This was his seventh championship since taking-over as skipper in 1989. Complicating our search further is that a Douwe Visser Azn. is also an SKS skipper, and he won the series championship twice, 2005 and 2009 with the skûtsje, Doarp Grou. He came second in this year's competition. Further confusing our search engines is that Albert Visser Jzn. is the skipper of the SKS Drachten skûtsje, Twee Gebroeders, a serious contender. With all the notable skûtsje involvement of these modern Douwe and Albert Vissers, Google couldn't get us back beyond very recent history.

I did find a Twitter account for one of the Vissers and sent a tweet. On a website profile for another of the Vissers, I used the comments box to post a question about a possible family connection with our skûtsje's 1941 owner. 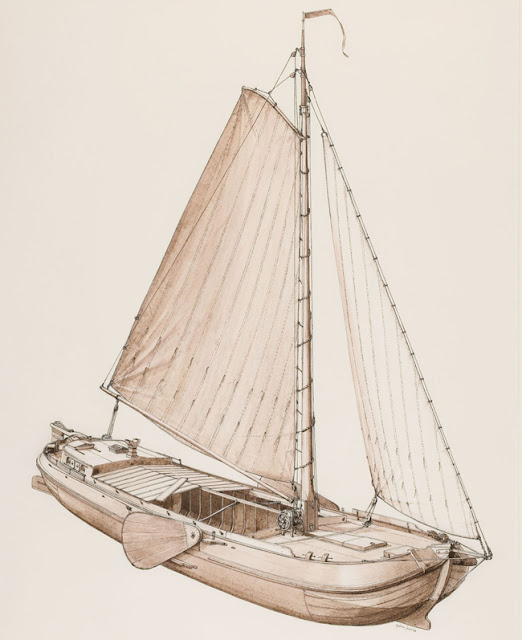 During my research, I found a wonderful drawing in a museum archive. It depicts a classic working skûtsje with its small roef (deckhouse) aft for the skipper and his family, and also clearly shows the cargo hold with some of its luiken (covering) removed. The classified racing skûtsjes must retain these original features, while the conversions to pleasure generally had the roef removed to fit an engine and to make a cockpit. The hold was then covered over with a more elevated jachtenroef, like on our Nieuwe Zorg. 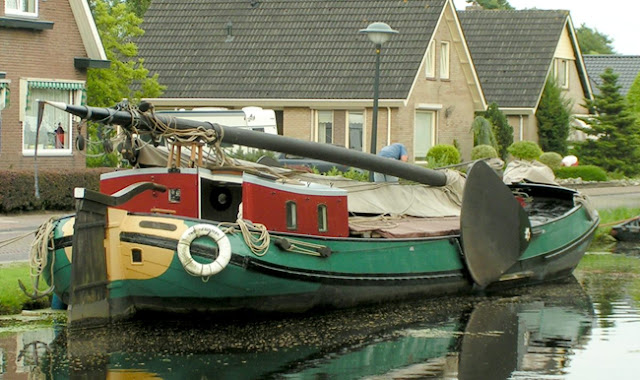 In the archive I also found a photo of a well-maintained skûtsje in a classic working configuration, though with a roef higher and slightly longer than usual. The curve of the roofline repeats the sheer of the gangboord and berghout (gunwale and rubbing strake), and this we have seen repeated on the most pleasing looking of the lengthened jachtenroef conversions, like on our Nieuwe Zorg.